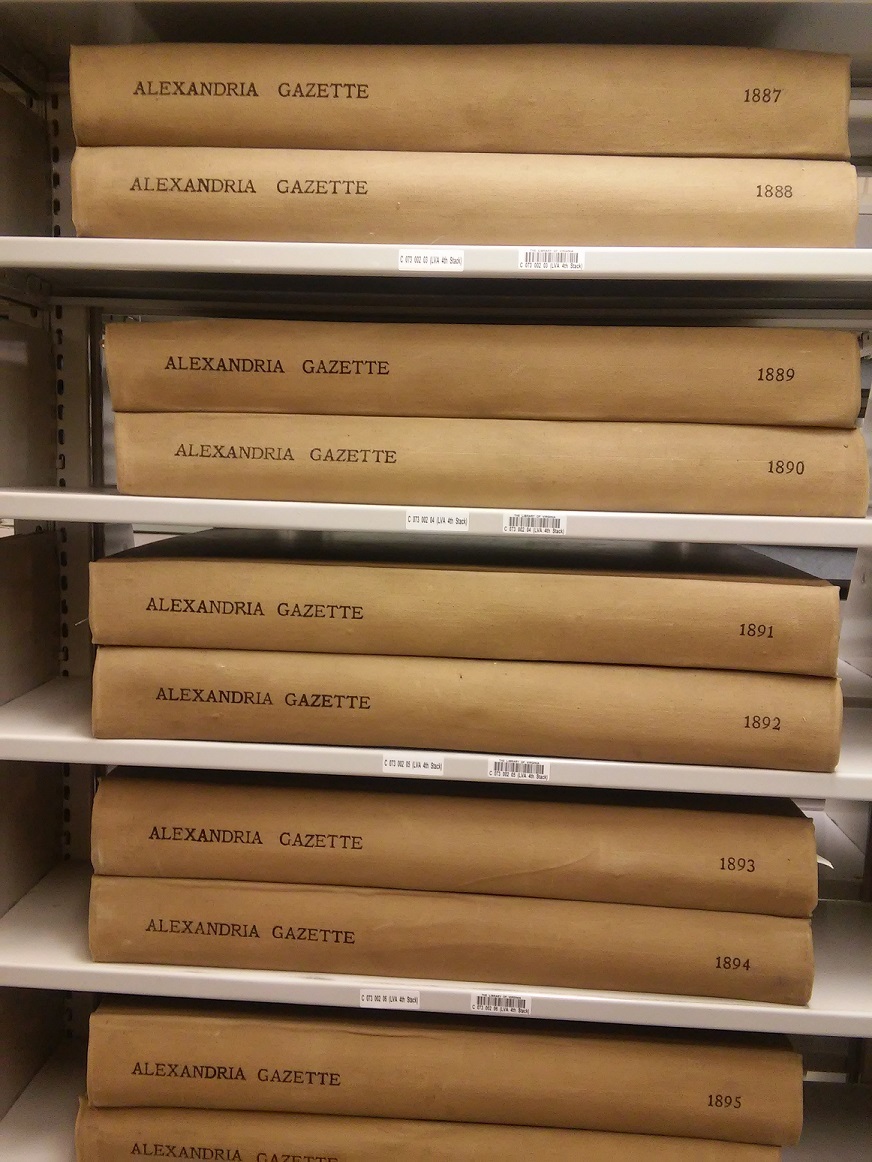 The Wawaset Disaster, August 9, 1873: An “Extra” Alexandria Gazette, Over The Transom And Into The Archive 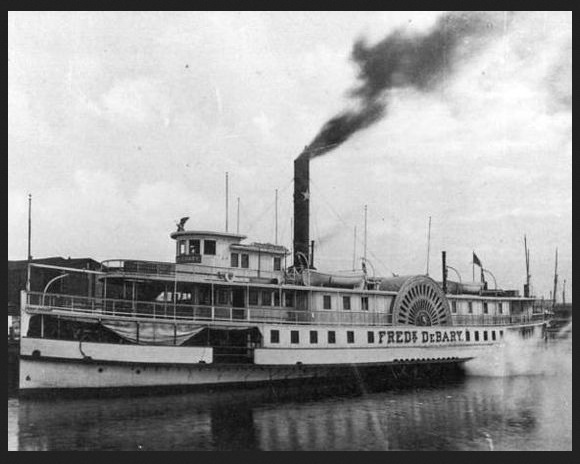 Each year the Newspaper Project receives papers from private collections which are generously offered as archival candidates.  Many are duplicates of papers already cataloged.  But some aren’t.  Some are added to our select collection of singular editions with headlines announcing moon landings, assassinations, the end of wars, and dramatic presidential elections. Then there is the unexpected item that provokes the response,  “Wait…what is…that?”   Most recently, the following: 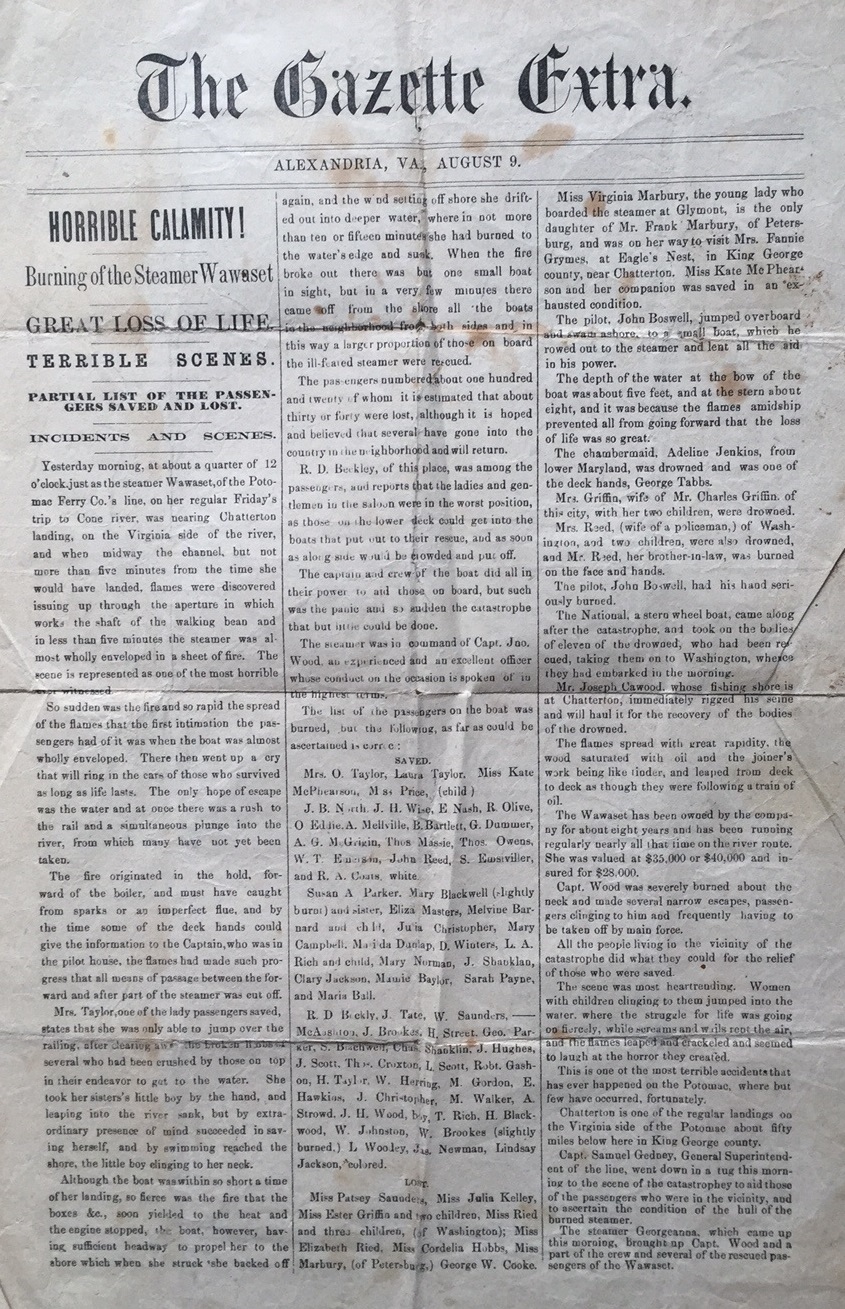 Curious, the masthead’s absence of a year and its resemblance to the precursor of the “extra” edition — the single page, single-sided broadside of early newspaper history.  Much like below (which I wish was in our collection, but is taken from a volume from the Library main stacks): 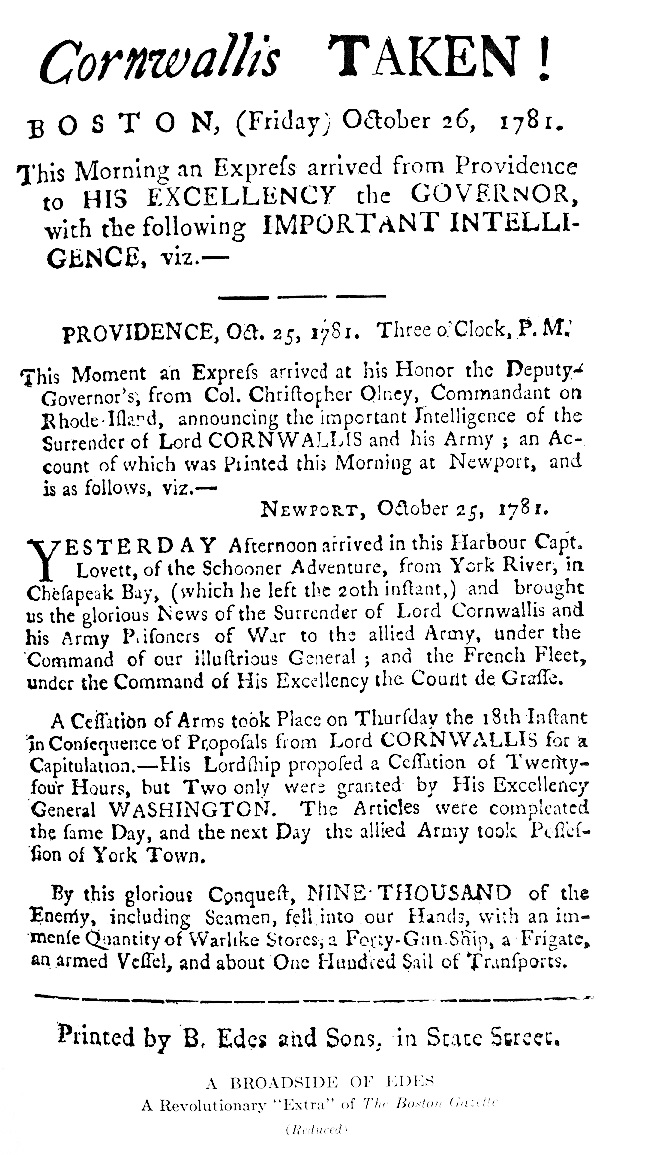 But do we already have this in our possession? Is this Gazette upstairs in the archive in original or on film?  Or both?  Our hard copy archive of bound editions of the Alexandria Gazette is as extensive and space consuming (and heavy, not to be dropped on a foot) as any on the shelf. But there is a gap of some years after the Civil War and among the years in that gap, yes, 1873.

What about the microfilm?  The film, shot by the Library of Congress, includes a complete run of 1873, and is the source of the digital images on both Chronicling America and Virginia Chronicle. While it does contain the standard edition of the Gazette for the 9th, there is no indication of the earlier extra edition.  In short, while we can’t conclusively speak to its rarity, so far our research points to a genuine find.

In the links I’ll provide to the press coverage of the Wawaset’s demise you’ll see references to Chatterton’s landing  where it burned and sank in the late morning of August 8, a Friday.  That’s the area circled above (click map to enlarge). The destination was the Coan River near Lewisetta at the mouth of the Chesapeake Bay.  The steamer was constructed by the North during the Civil War.

Here’s a column of steamship ads which appeared regularly in the Gazette and other local papers.  Circled is the ad of the Potomac Ferry Company, owner of the Wawaset, which might be described as part transport, part excursion vessel, part bus-on-the-water: 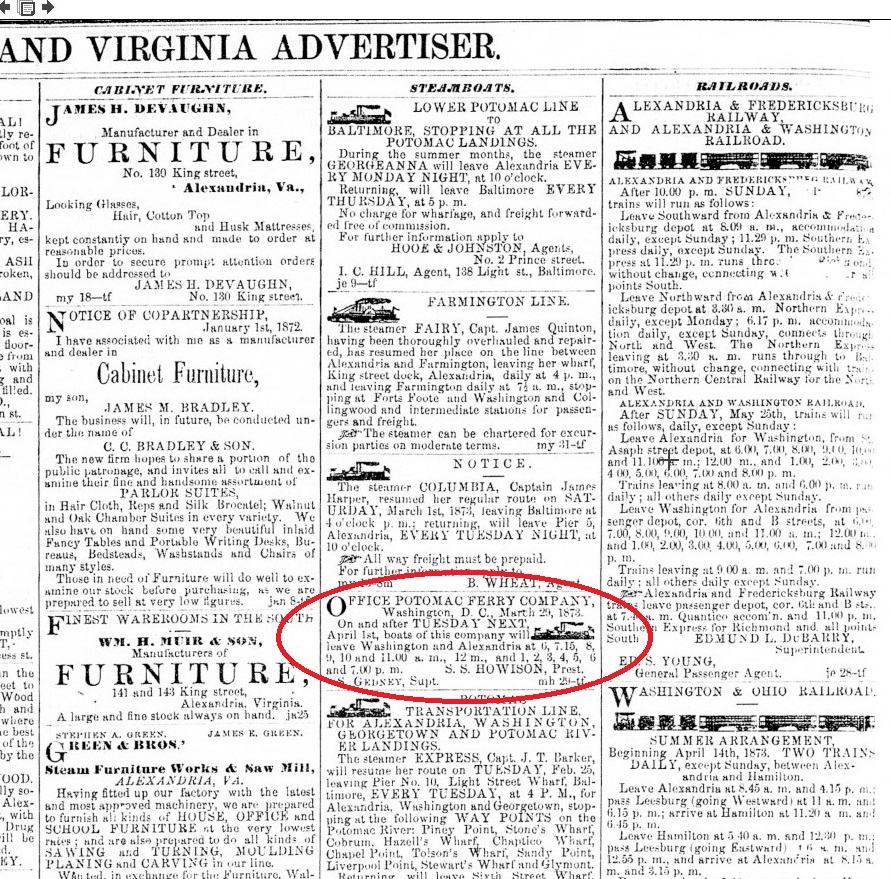 Post internet it’s perhaps more difficult to grasp how slowly information might navigate (upriver, in this case) to a population center supporting a newspaper.

Late Friday night a telegram is transmitted to Washington from Fredericksburg.  No dialogue occurs since the post shuts down for the night soon thereafter. Fredericksburg’s press, though closer geographically, is not a player in this story because its papers are semi-weeklies, not dailies.  The Fredericksburg Ledger, out the following Tuesday, simply repeats Gazette accounts.  Remember, Fredericksburg is on a different river, the Rappahannock and, in a sense, of a different world.

Roughly coincident with the telegram, a few survivors arriving by steamship in Washington carry, no doubt, a frenzy of narrative.   A jumble of fact, rumor and surmise, not to mention painful wonder for those who may have known passengers aboard the Wawaset, the news travels with predictive speed through Alexandria during the morning hours.

The Gazette masthead describes itself as an evening paper.  Clearly, on this summer’s day in 1873 (perhaps now the proper time to slip in the population, about 13,500, less than one tenth the present day), in circumstances of such distress, to stay speechless was too trying to an editor’s patience.  Now was this Gazette extra distributed as a bonus to subscribers (8 dollars a year, 75 cents a month), sold to those on the street, or given away?  And how many were printed?  Of this, one is unsure.   Had the Gazette ever before printed an extra?  One might almost suspect not, given its odd combination of decorum and shout, the former in the masthead, the latter in the headline, which lowers the volume gradually to the relative calm of “Incidents And Scenes.”   Sustained print hysteria, punctuated by a newsboy’s yelp, would accelerate later in the century as newspaper growth boomed and competition increased among large metro dailies.

From Chronicling America here are examples of Wawaset coverage.  First, the full edition (also housed within our own Virginia Chronicle) which followed, and directly borrowed from, the earlier Gazette extra and in their production layout of the day, on page 2 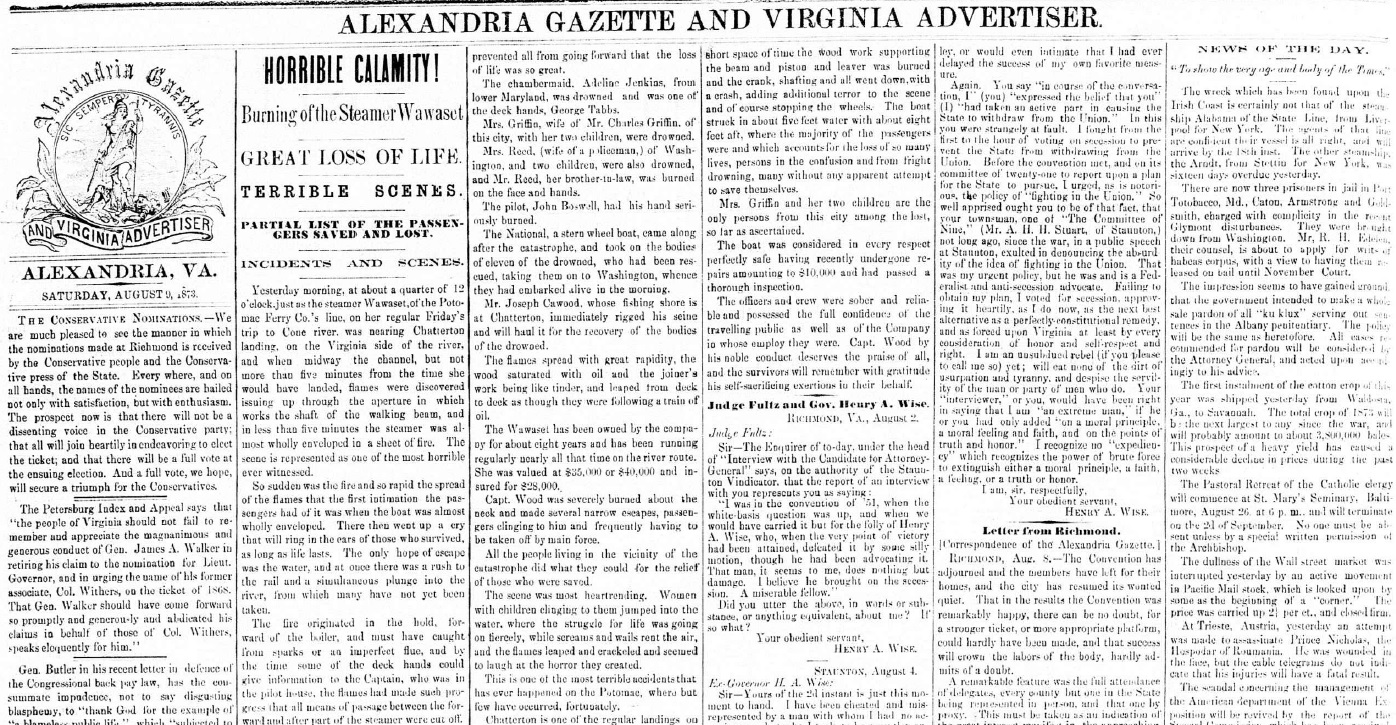 Of course, this was also a story of equal if not greater interest on the opposite side of the Potomac in the Capital.  The Evening Star, in the more modern manner on page 1, provided plenty of vivid detail from participants and eyewitnesses. 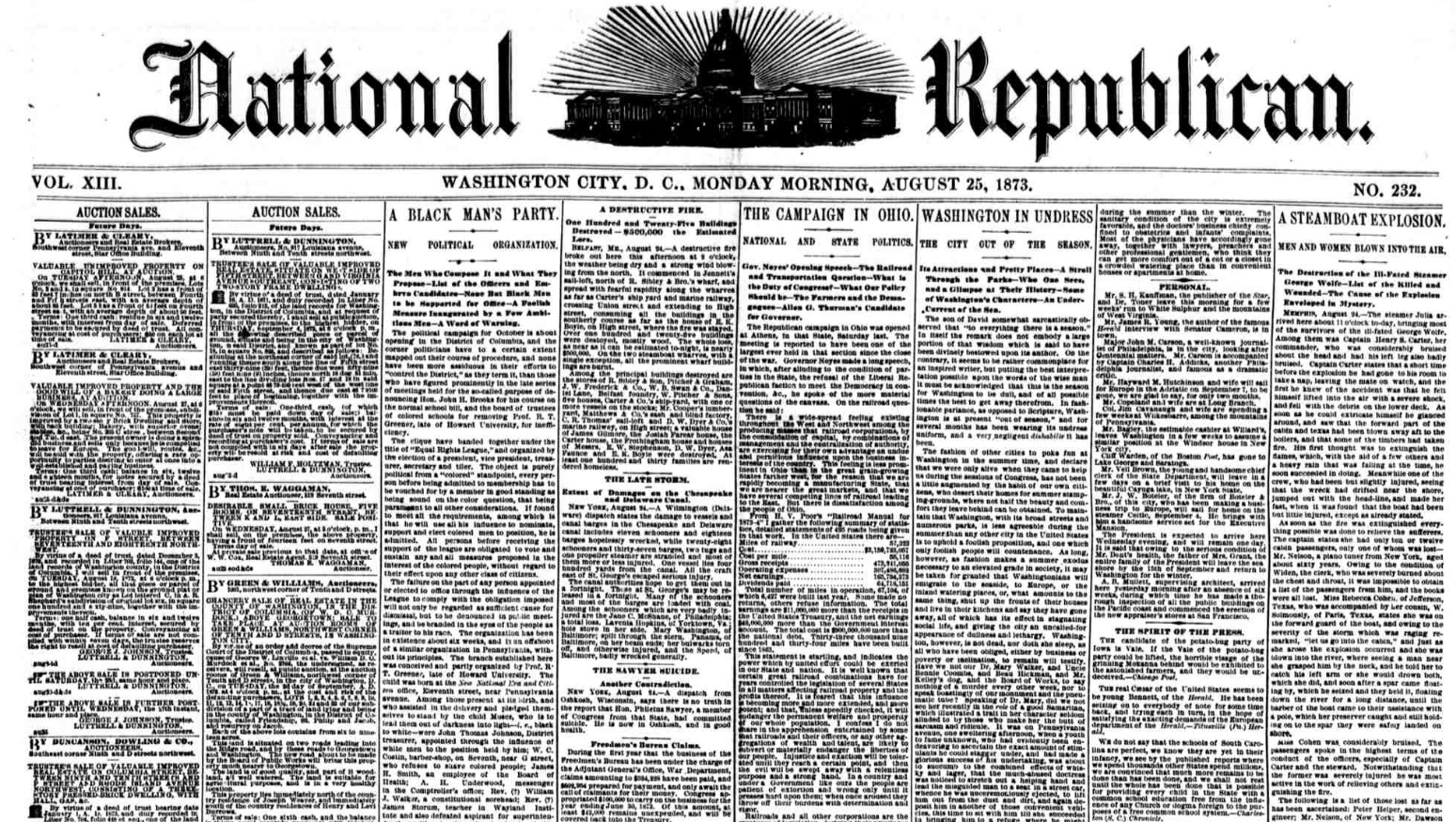 And finally back to the Gazette for that committee’s final conclusions-in quick dispatch, only three weeks after the disaster! 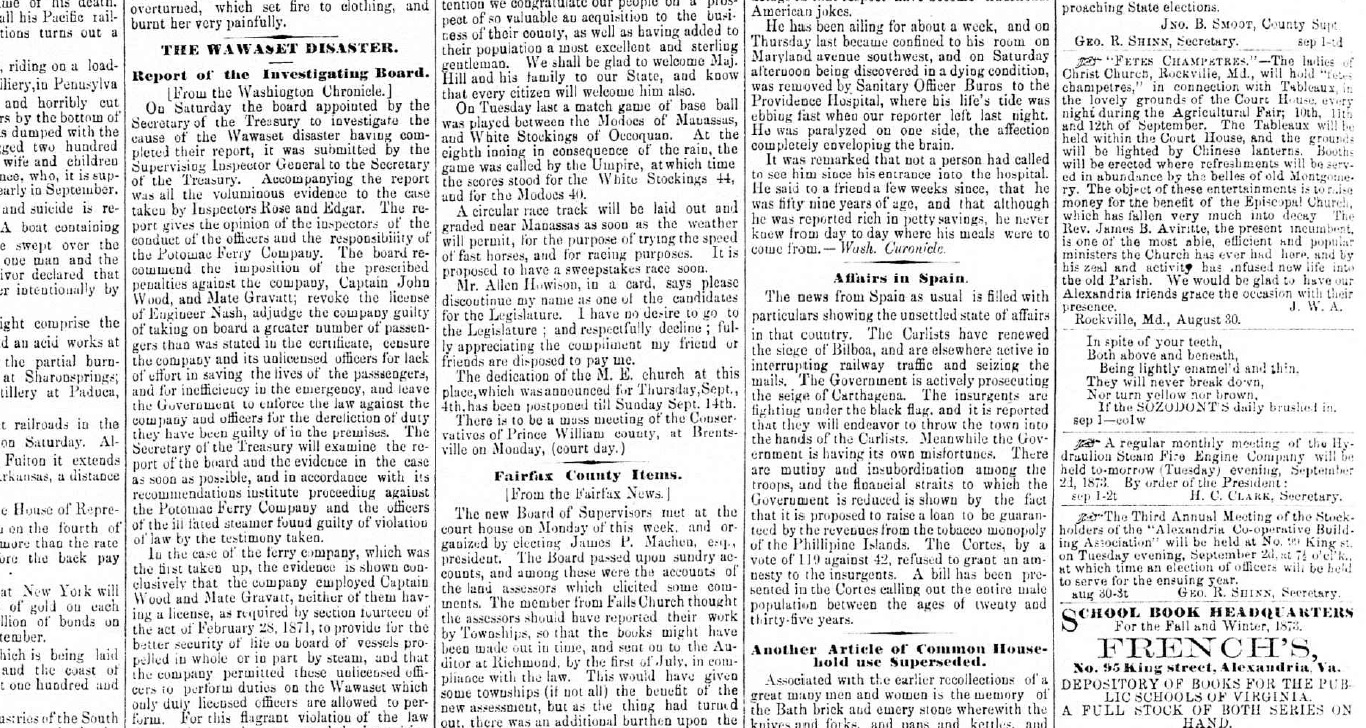 In pursuing source material about the Wawaset’s last trip for this blog (I trust in your gratefulness for resisting the title “One of the ten worst disasters of the American 19th century you’ve never heard of”) I discovered this book, Disaster on the Potomac: the  Last Run of the Steamboat Wawaset, published in 2009.  While well researched and certainly a volume I would never discourage you from reading – especially for its account of race relations aboard ship – I feel obliged to observe that much of that research came from newspaper accounts.   To which, here at the Newspaper Project, we strive to provide a direct, ready and steadily growing catalog of access.

For the “Extra” Gazette and other donations, the Project thanks Charles Phillips.