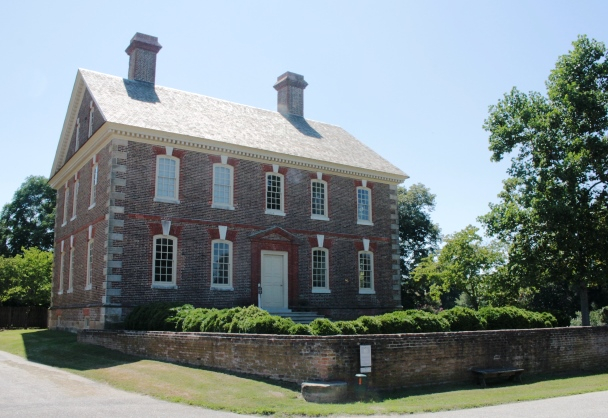 York County, originally named Charles River County for King Charles I, was one of the eight Virginia shires (counties) first enumerated in 1634. A document dated 7 January 1634 employs the name York County; a statute from that same year, officially changed the name to York County. This change was probably in honor of James, Duke of York, the second son of Charles I and, later, King James II. York County is one of Virginia’s Lost Records localities. Most of its pre-Revolutionary War era loose records are missing. A will that was discovered in a transfer of court records from York’s Circuit Court to the Library of Virginia is a significant historical find given the absence of so many original records. Recorded in York County on 16 February 1789, it is the last will and testament of General Thomas Nelson, Jr. 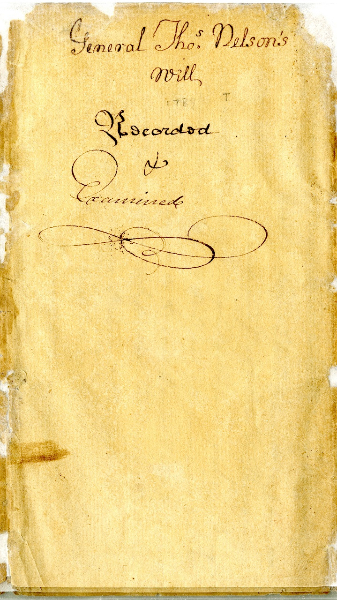 Thomas Nelson, Jr., was born on 26 December 1738 in Yorktown, Virginia, to William Nelson, a former colonial governor of Virginia, and Elizabeth Burwell Nelson. Among his many accomplishments, he served in the House of Burgesses from York County from 1761 to 1775, and represented Virginia in the Continental Congress. He is one of fifty-six signatories to the Declaration of Independence, seven of whom were from Virginia. Nelson represented York County in the House of Delegates between 1777 and 1783 and again between 1786 and 1788. He also commanded the Lower Virginia Militia during the Revolutionary War, leading 3,000 Virginia militiamen during the siege of Yorktown.

Nelson succeeded Thomas Jefferson as Governor on 12 June 1781, resigning on 22 November due to ill health. Looking to recoup some of the personal fortune he lost during the Revolutionary War, he filed a chancery suit in 1786 in York County against another Virginia signer of the Declaration of Independence, Carter Braxton. Nelson wrote his will in York County on his fiftieth birthday.

Nelson’s original nine page will serves as a detailed account of the real and personal property that he acquired over his life time. His heirs consisted of his wife, six sons, and five daughters. In his will, he bequeathed to his wife, Lucy, all his lands and plantations in Hanover County, estates known as “Montair,” “Mallorys,” “Long Row,” and “Smith’s.” In addition, she was given his farm near York and granted permission to cut firewood on a tract of land in Warwick County known as “Hobdy’s.” His eldest son, Thomas, was given houses and tenements in the City of Williamsburg. He also received lands in James City County and 2,500 acres in Hanover County. His father also mentioned giving him the slave, Aggy, who was living at York, together with her increase except for her eldest son, Charles. To his son, Philip, he gave the plantation in Hanover County known as “Offley” and a piece of land called the “Triangle,” purchased by his father from William Berkeley. He also inherited an enslaved girl, Melinda, then residing with Mrs. Brown at Bull Run. His son Francis, received land in Hanover County known as “Bridge Quarter” and land lying to the South to be taken from the “Montair” tract. To another son, Hugh, he gave land and a plantation in Hanover County known as “York’s.” Hugh also received 100 acres in York County which were purchased by his father from his brother, and 50 acres in York County near the large swamp in Charles Parish. A tract of land in York, then occupied by Mrs. Lucy Moor (Moore), was also part of his inheritance along with an interest in a water grist mill on the said lands. Hugh eventually became a United States Representative from Virginia and served in Congress from 1811 to 1822.

Upon the death of his mother, Lucy, Robert Nelson would inherit the plantation in Hanover County known as “Montair”and the plantation upon which Skelton Smith lived. The last son, William, received lots in the Town of York purchased from William Rowsay. Upon his mother’s death, he would inherit the plantations in Hanover County known as “Long Row” and “Mallorys.” He was also given sunken grounds on Newfound River and his father’s servant, James Rideout. With the exception of William, all sons were given “a Negro boy to work with the carpenters to learn the trade.” As noted in the will, various blacksmiths, carpenters, shoemakers, and weavers were employed by and would continue to work for his wife and several children. Nelson’s daughters, Susannah, Lucy, Judith, and Mary were given money and unnamed slaves. His eldest daughter, Elizabeth Page, was given one thousand pounds and a slave, Nancy, then in the possession of his mother, Elizabeth Burwell Nelson.

Toward the end of his will, special mention was given to Smith Harry, who was “freed and discharged from all services.” Nelson intended that Harry be given a good house to live in and that he receive a good suit of clothes, two shirts, two blankets, three hundred weight of pork, and five barrels of corn each year during his life. Thomas Nelson, Jr., named two friends, Nathaniel Burwell of Carters Grove and Francis Willis of Gloucester County, along with sons William and Thomas, as his executors. The executors received land in Hanover County known as “Bull Field” as well as “Bull Hill,” containing 1,568 acres and lands in Prince William and Loudoun counties. Upon Thomas’ death, these lands were sold for his debts. Nelson’s nephew William, son of his brother Nathaniel, was given an enslaved boy named Dick. 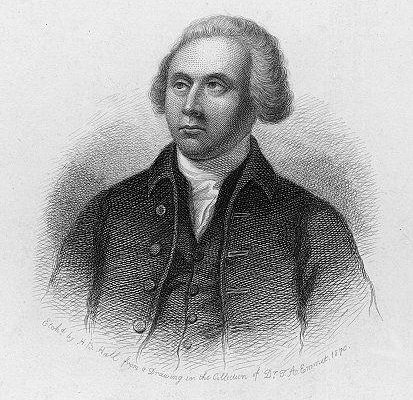 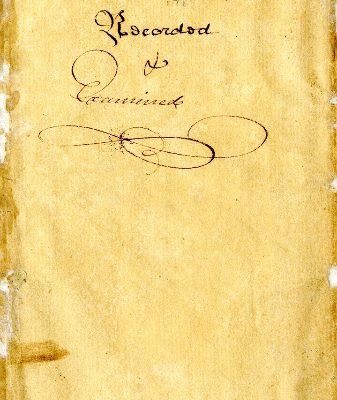 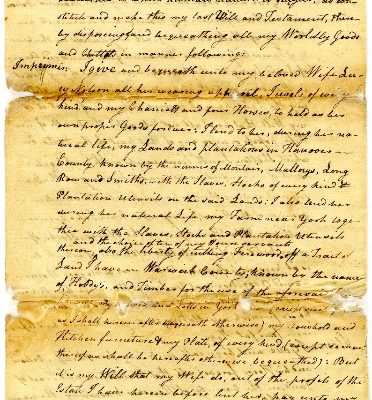 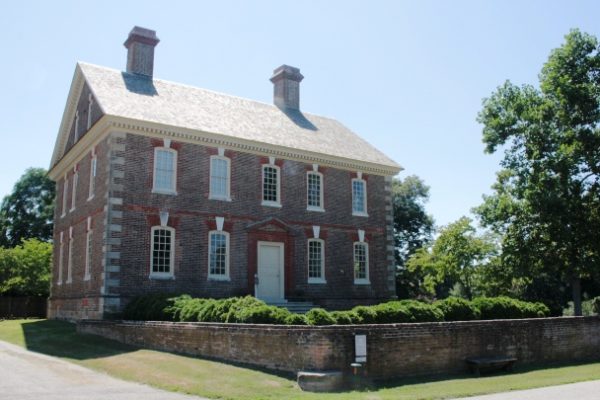 On 4 January 1789, Thomas Nelson, Jr., died in York County (some accounts say Hanover County).  He was buried in Grace Church Cemetery in Yorktown. Nelson County, Virginia, and Nelson County, Kentucky, are both named after him. Nelson is also honored on the Washington Equestrian Monument in Richmond’s Capitol Square. Dedicated in 1858, the Washington statue features Thomas Nelson, Jr., as one of the six lesser statutes displayed below the first president astride his mount. In 1967, the Virginia State Council for Higher Education named the Thomas Nelson Community College in Hampton, Virginia in his honor.

Along with Nelson’s will, the Library of Virginia also houses the executive papers from his brief term as governor among the State Records collection. Among the interesting items found in this collection are correspondence related to refugees and slaves attempting to escape on board the Bonnetta, a sloop of war; General Lawson’s command of the militia ordered to conduct the British prisoners to their stations at Fredericksburg and the reduction of York and Gloucester; and the capture of the whole British Army under Lord Cornwallis. In addition, Nelson’s certificate of qualification as governor and his proclamation laying an embargo on various provisions are worth noting.