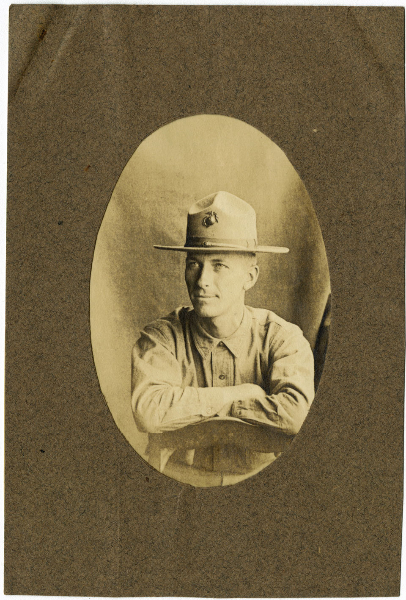 This is the first entry in a series of blog posts spotlighting stories and records of Virginia’s involvement in World War I. United States Marine Private Clarence A. Bryce, Jr., the subject of this week’s post, died on 2 November 1918 after being hit by a German artillery shell during the Meuse-Argonne Offensive.

He attempted to enlist in the Army but was rejected because of his low weight. Bryce successfully enlisted in the United States Marine Corp on 7 April 1918 at Paris Island, South Carolina.

After training at Fort Crockett, Texas and Quantico, Virginia, Bryce and his unit, Company B, 1st Training Battalion, left for France, arriving in Brest on 26 August 1918. After additional training for the front, Bryce joined 82nd Company, 6th Marine Regiment on 10 October 1918. Assigned to the 2nd Division, Bryce’s unit fought in the Meuse-Argonne Offensive, a 47 day American offensive lasting from 26 September to 11 November 1918 along a twenty-four mile front from the Argonne Forest to the Meuse River. On 2 November 1918, Bryce went “over the top.” After advancing about a mile, his unit encountered German machine gun and artillery fire. Corporal Andrew J. Wimberly, Bryce’s squad leader, described Bryce’s death in a 10 July 1919 letter to Dr. Bryce. “I thought I’d smoke so I asked Clarence for a smoke,” Wimberly wrote. “He gave me one and just as I was lighting it I felt a shell hit and when I came too [sic] twenty minutes later they told me that Clarence was killed and his best friend Gearhart was badly wounded.” 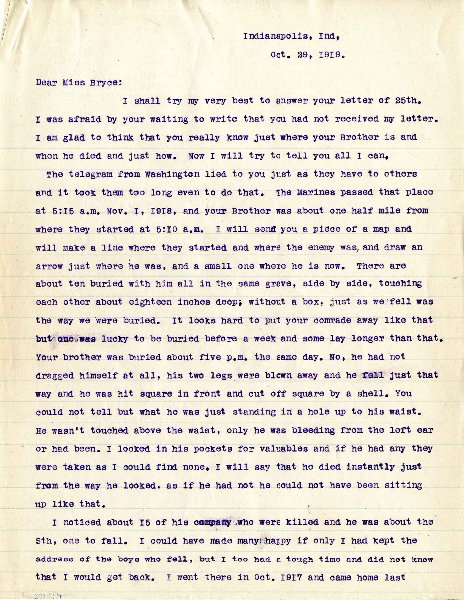 A.E. Carnes, a soldier in the 1st Division, provided additional details of Bryce’s death, in a series of letters to Jeannette Bryce written in October 1919. Carnes got her name and address from a letter he found on Bryce’s body.  “[Bryce] was killed at 5am on the morning of [2] November 1918 in the Argonne Forest, one and a half kilo’s east of hill 263,” Carnes wrote,

I was running across the field and my attention was attracted by seeing a man sitting up dead, and upon investigating I found that he had been hit directly by a shell just below his waist, and I could not see nor find his legs….he wasn’t touched above the waist, only he was bleeding from the left ear or had been.

Carnes described how he had buried Bryce later that day.

“There are about 10 buried with him all in the same grave, side by side, touching each other about 18 inches deep; without a box, just as we fell was the way we were buried. It looks hard to put your comrade away like that but one was lucky to be buried before a week and some lay longer than that.”

In March 1920, Bryce was reburied in the Meuse-Argonne National Cemetery, Meuse, France.

In a response to a 1921 request for letters from Bryce from the Virginia War History Commission, a grief-stricken Dr. Bryce replied:

Owing to strict censorship and constant movement of his command while in France he never received a single letter from home while over there though scarcely a day passed that some of us wrote to him until the signing of the armistice. All of our letters to him were returned to us unopened after the war ended. Most of his letters and postals [sic] while training in this country were letters of a most affectionate son and brother, purely personal and too sacred to lay bare to the public. I think we received two postals [sic] and two letters from him while in France, and one taken from his dead body addressed to a sister and crimsoned with the lifeblood of one of the bravest and best boys that the Almighty God ever created….His maternal grandmother was a native born French woman, and it was as though fate had directed that he should give his life in defense of the land of her birth. 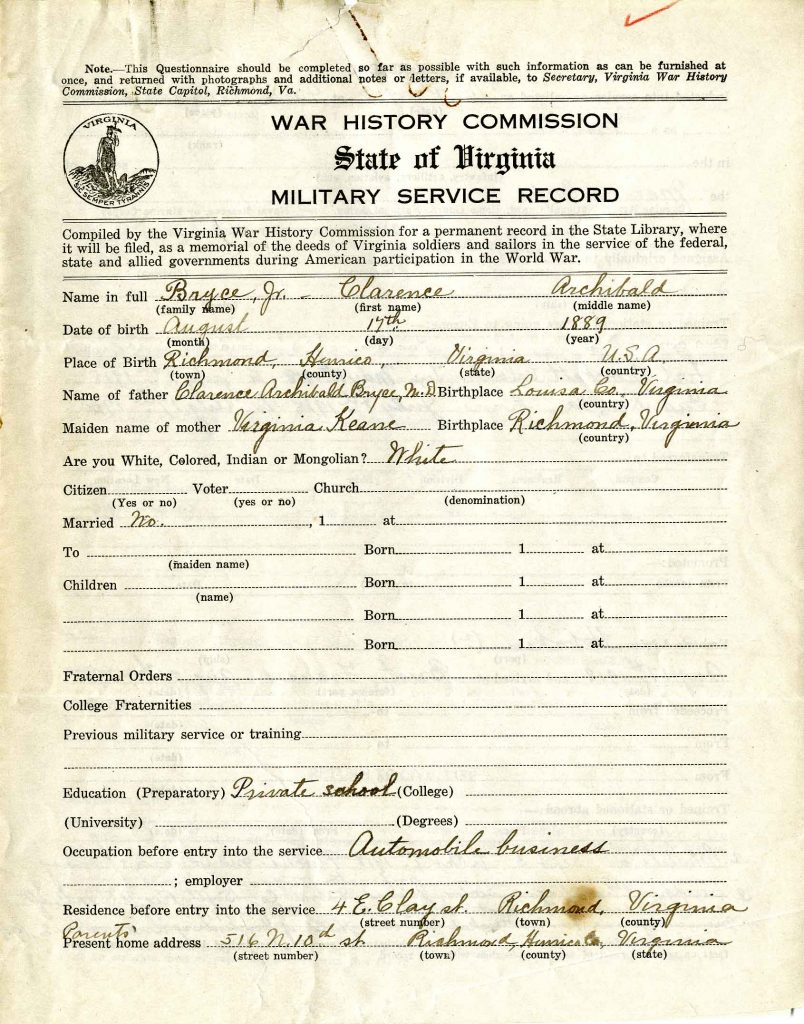 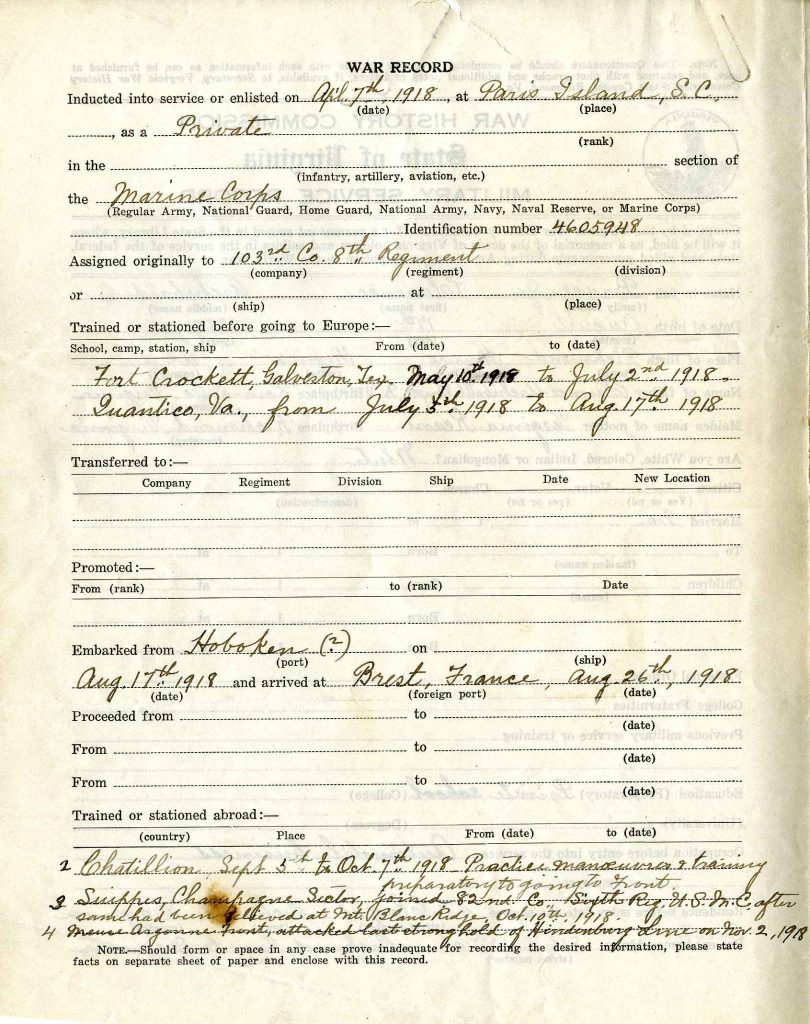 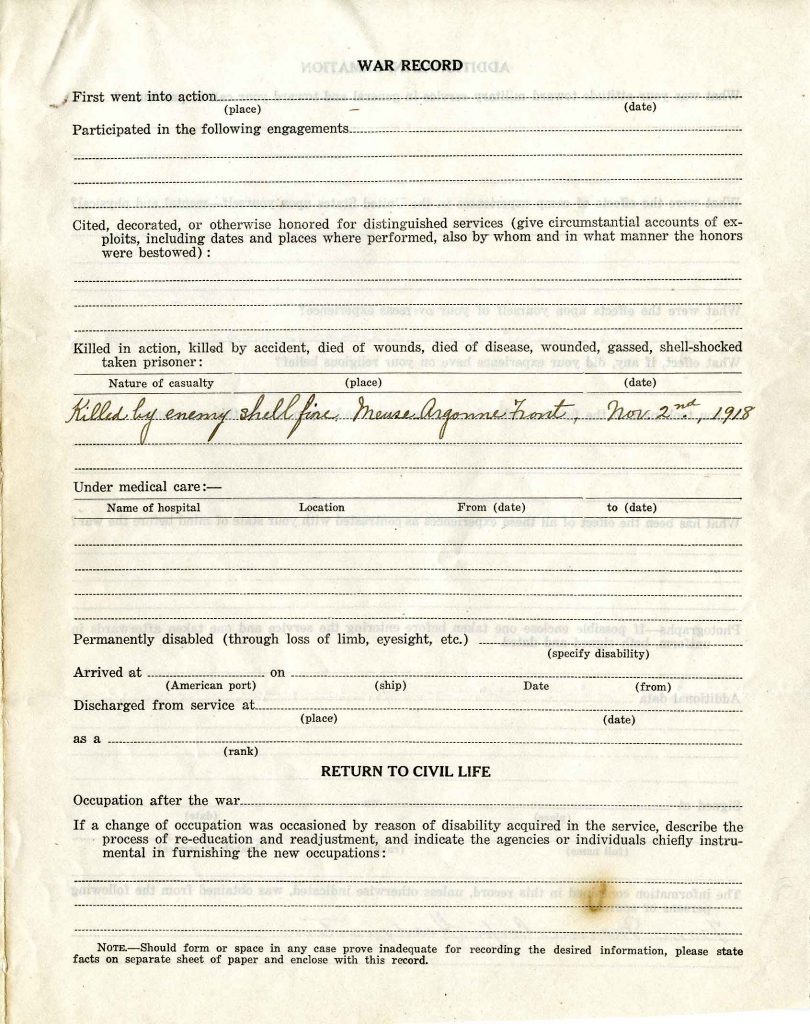 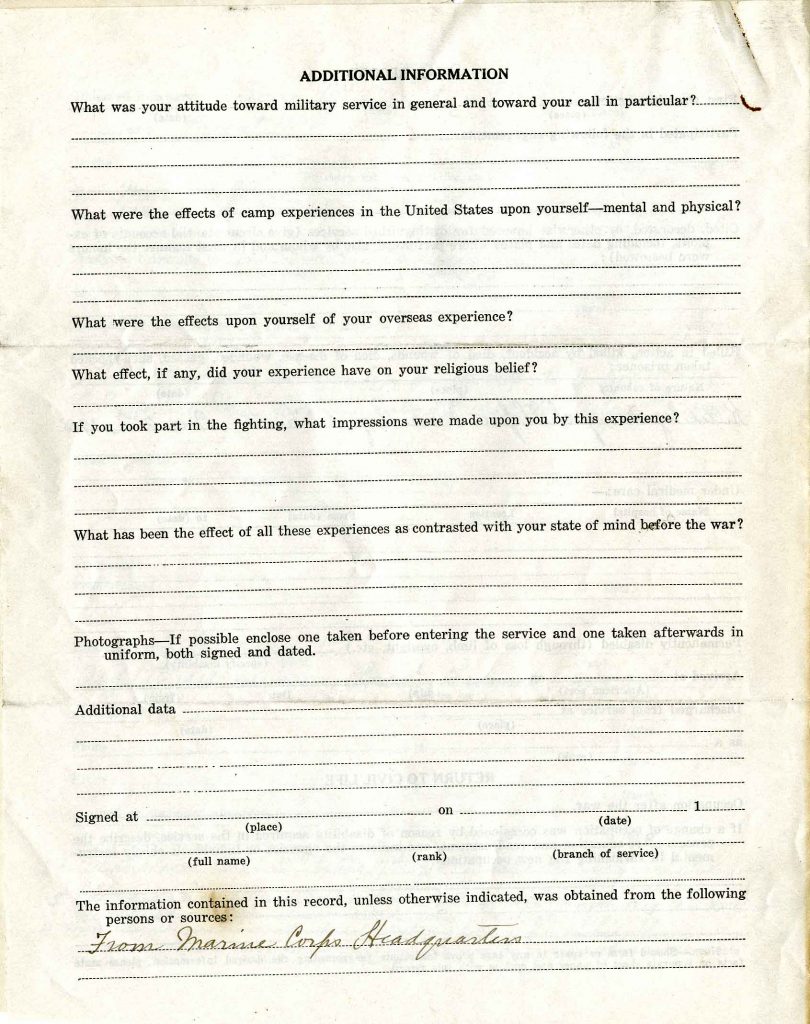 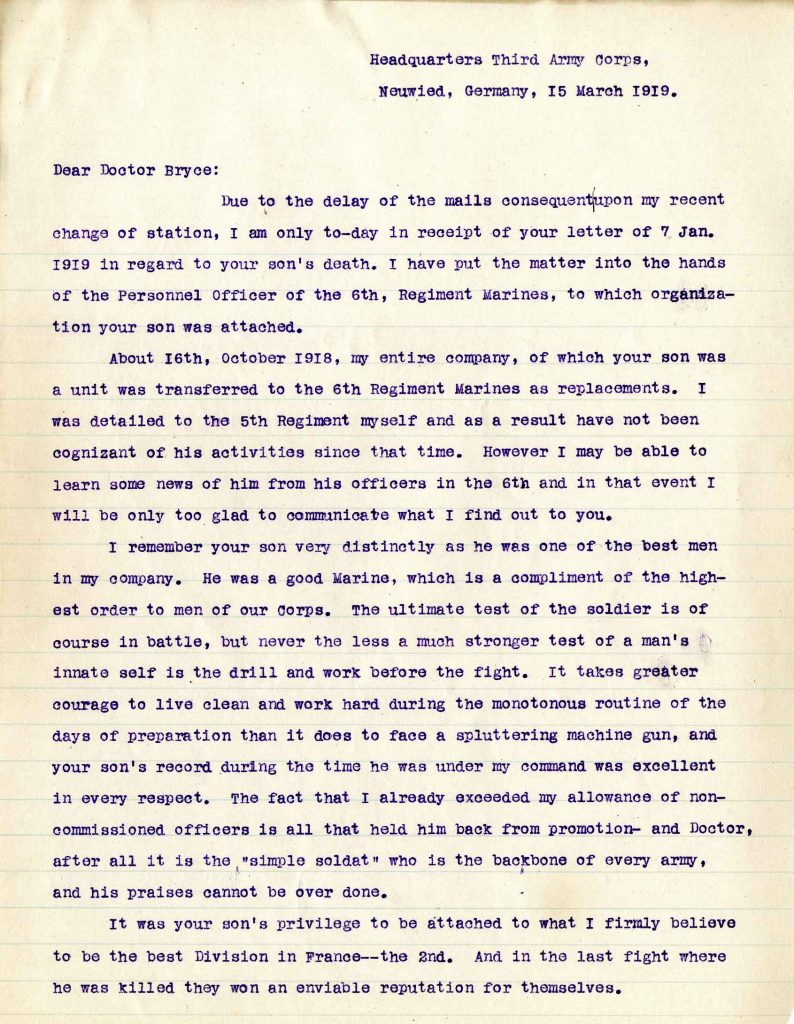 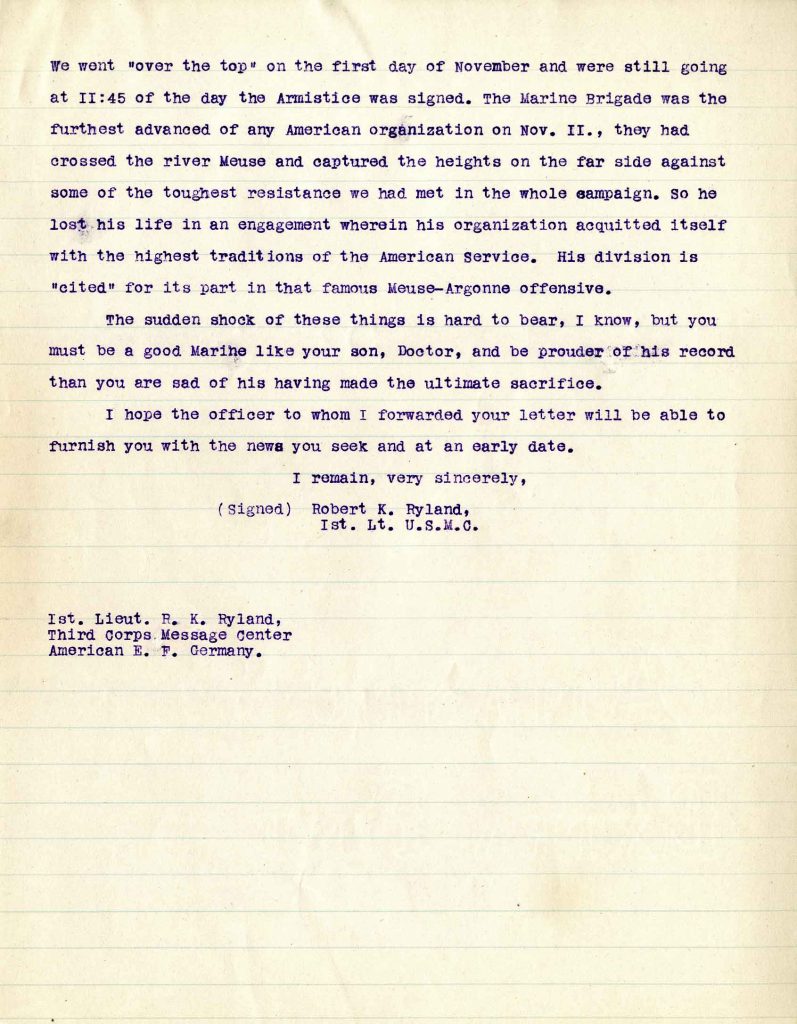 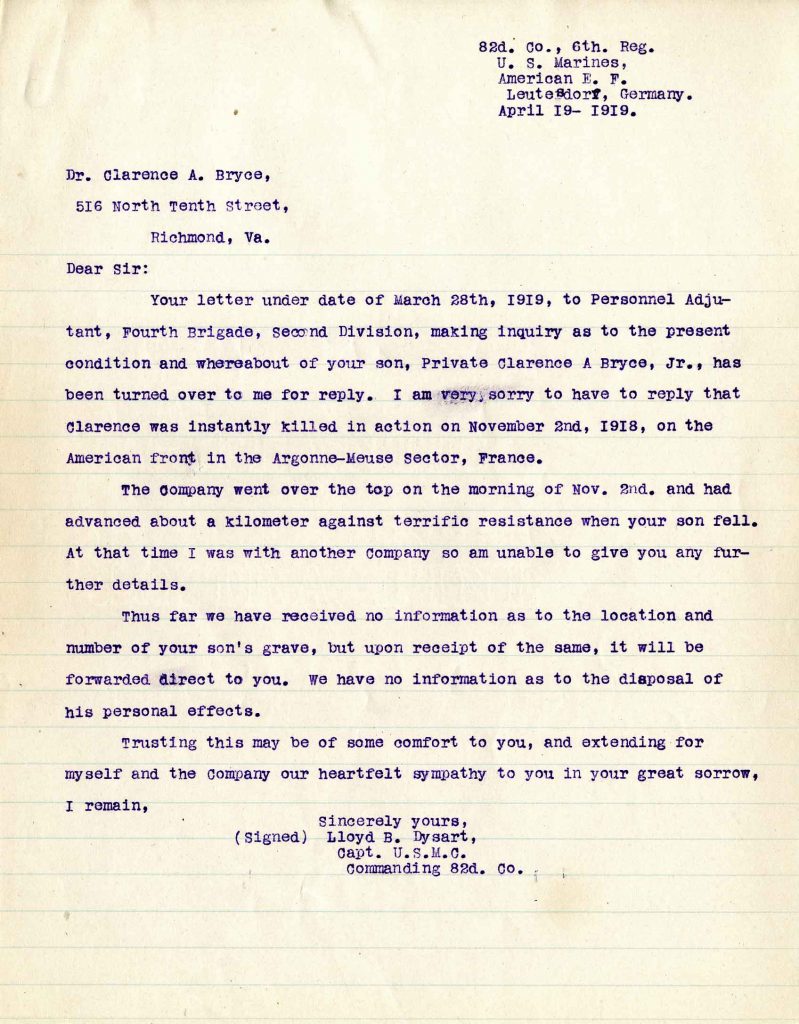 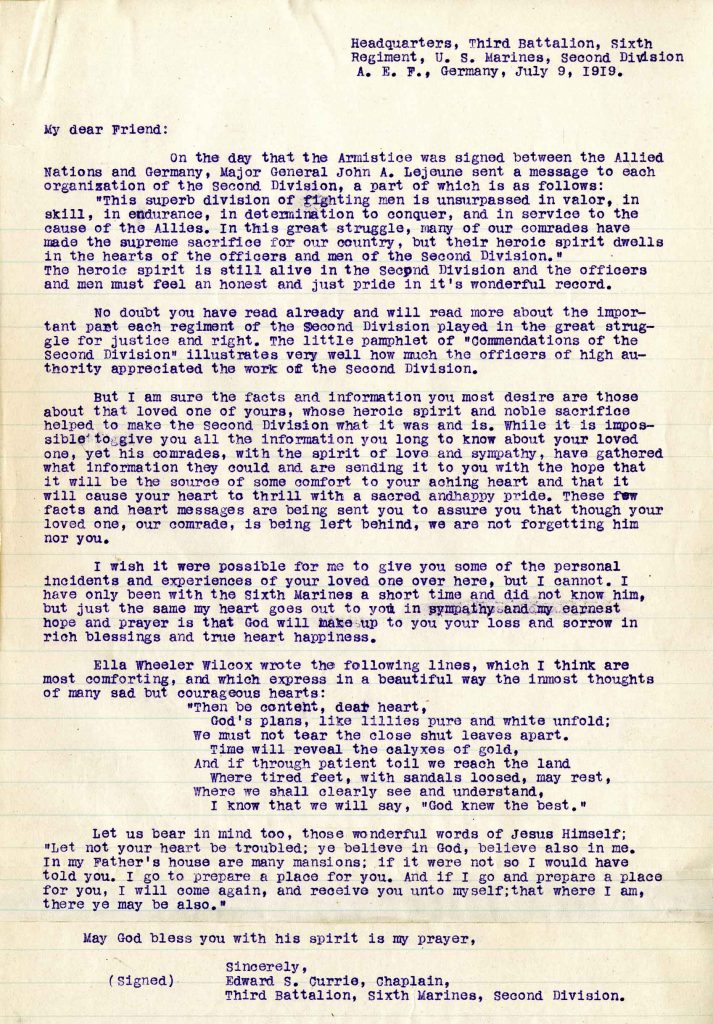 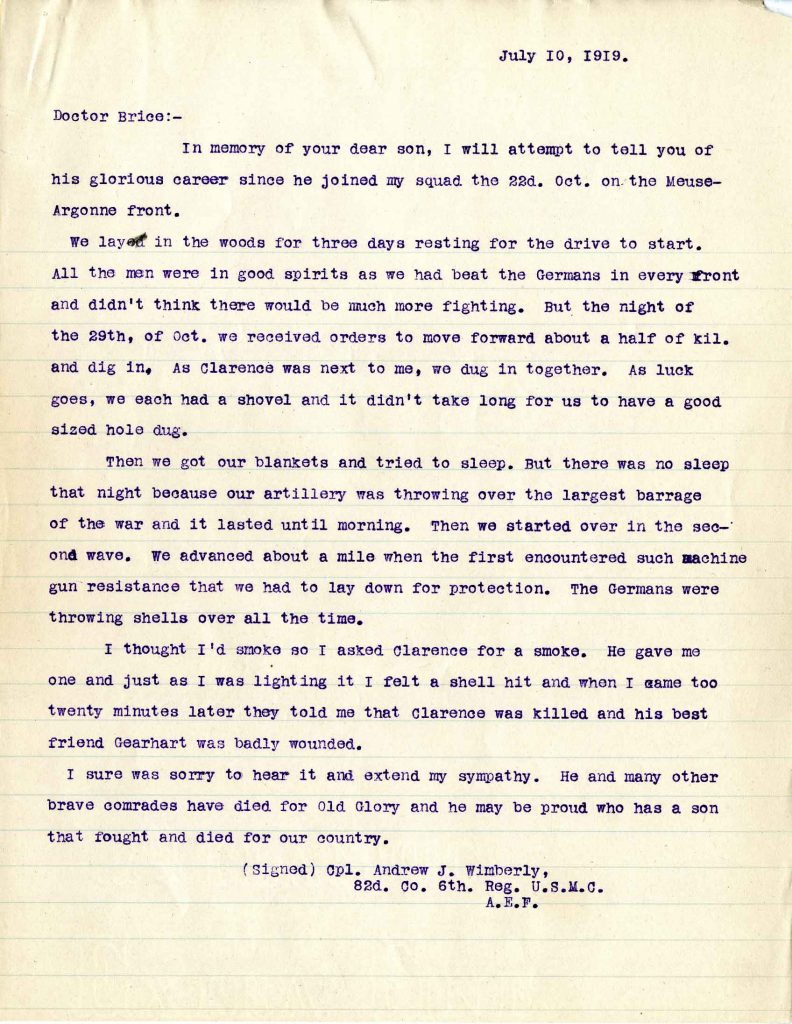 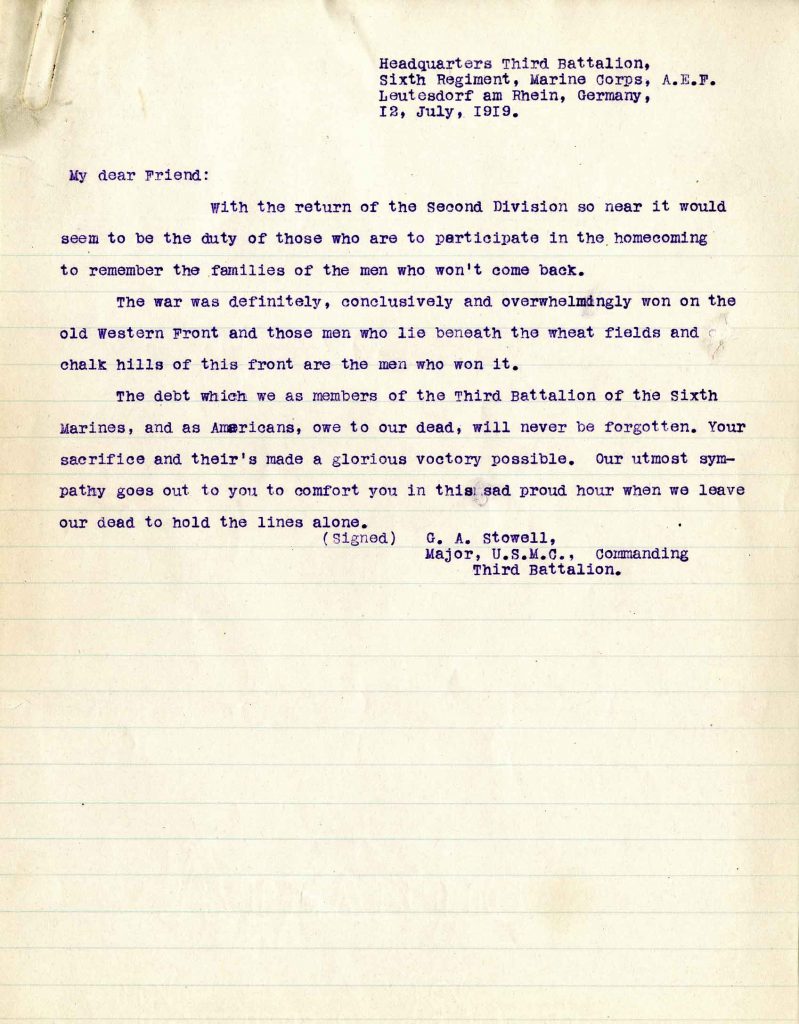 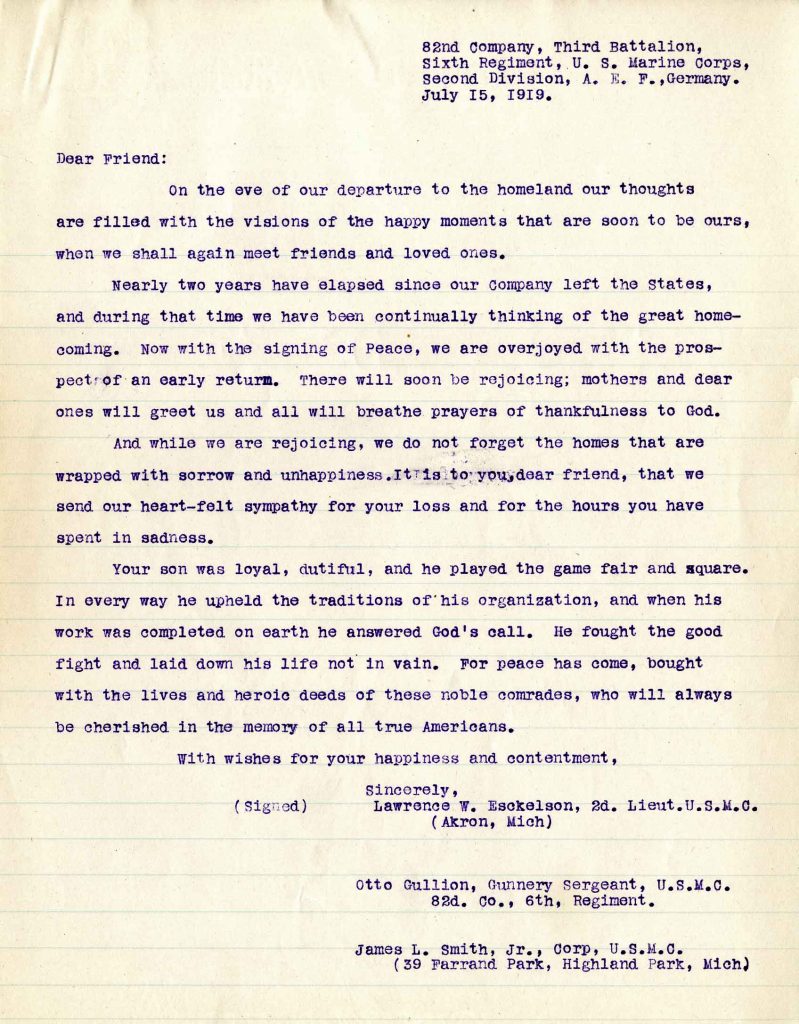 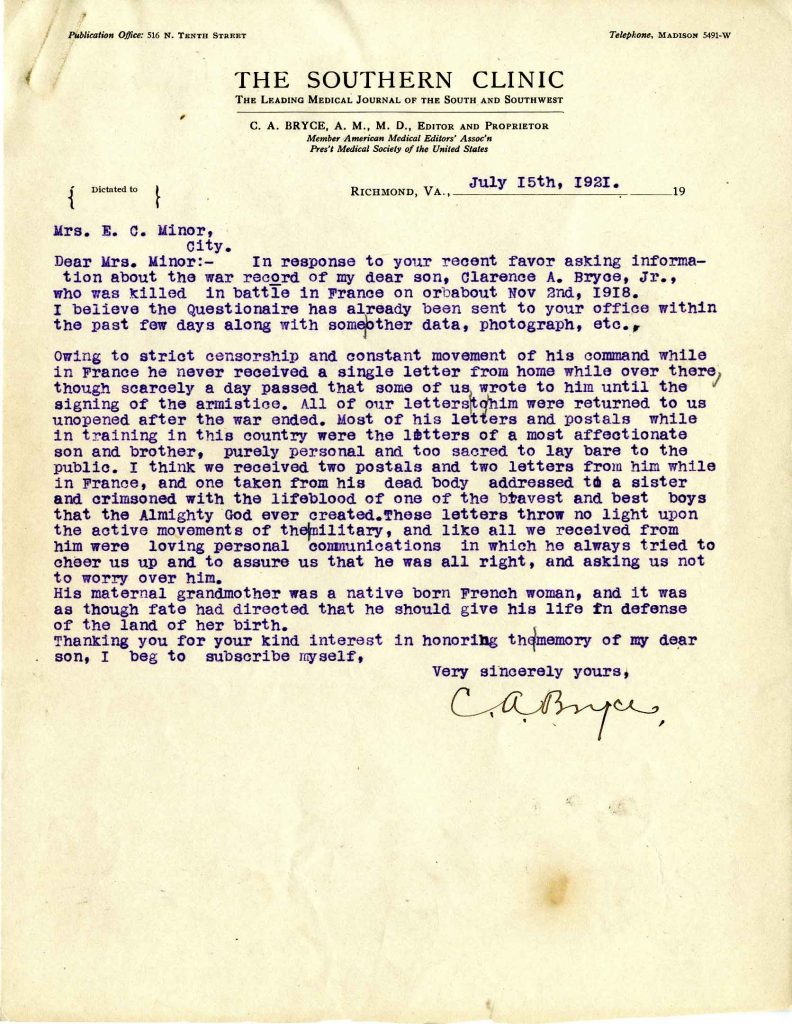 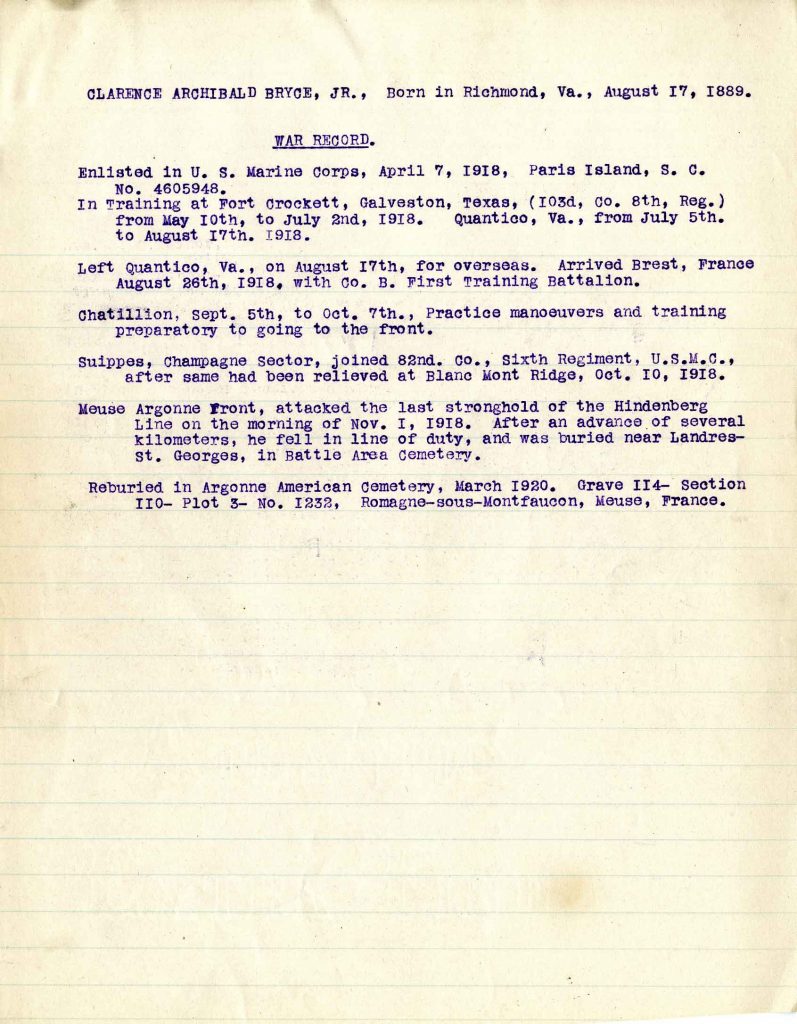 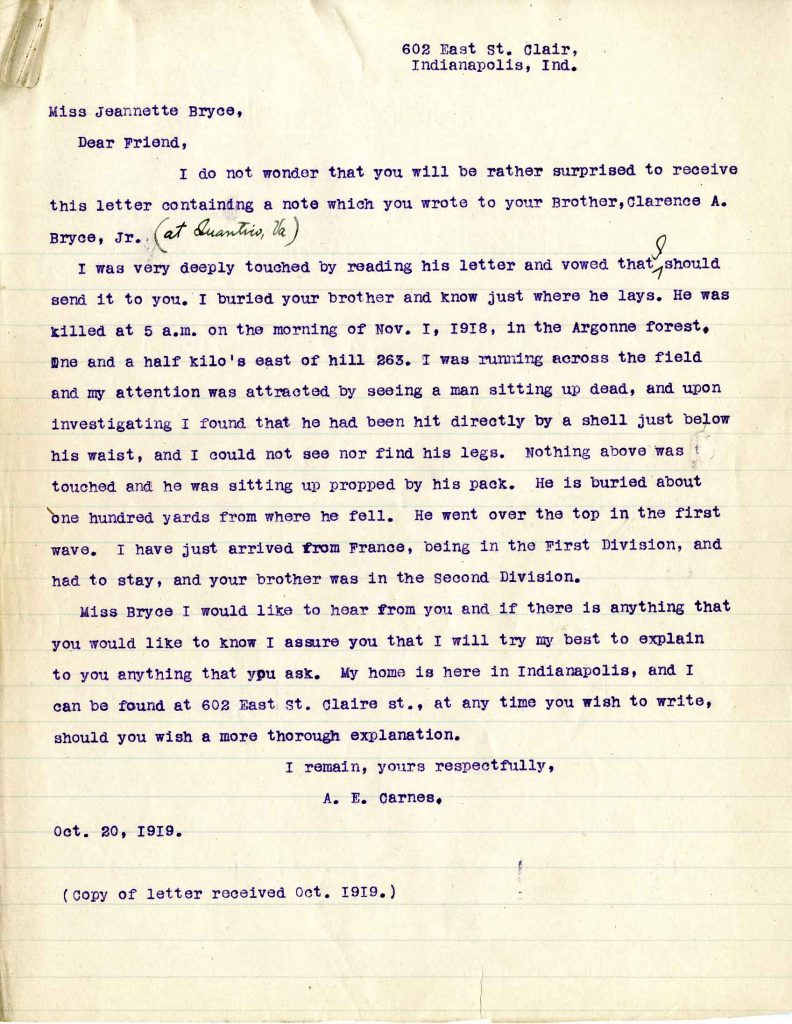 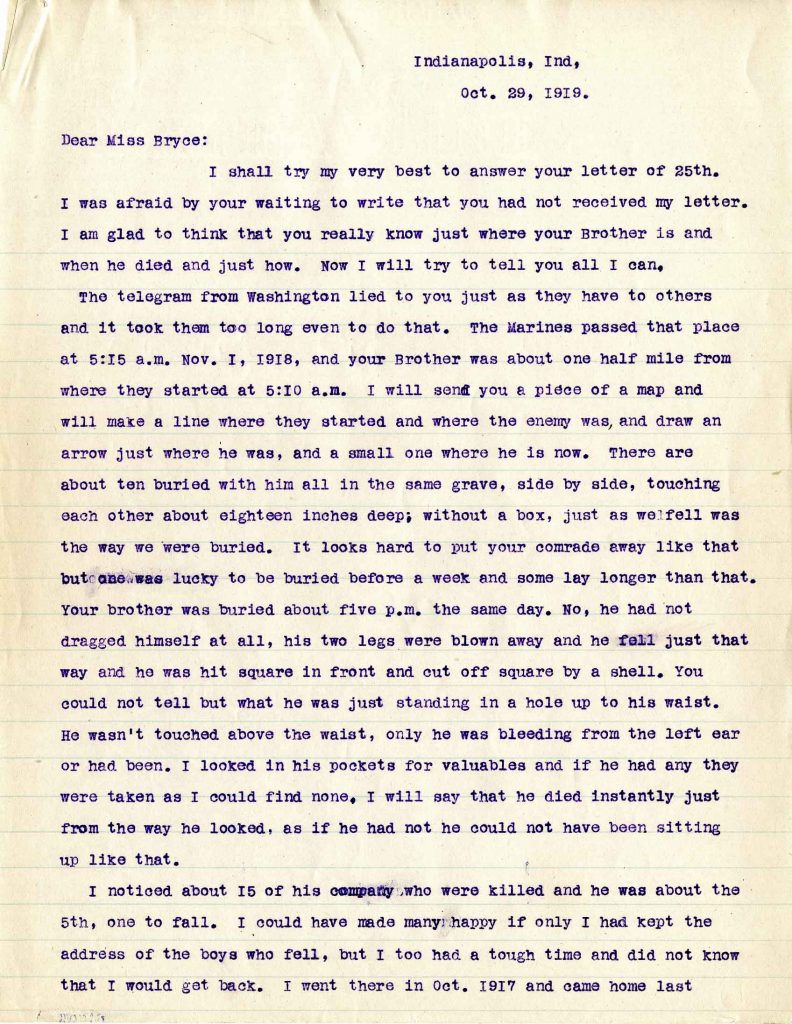 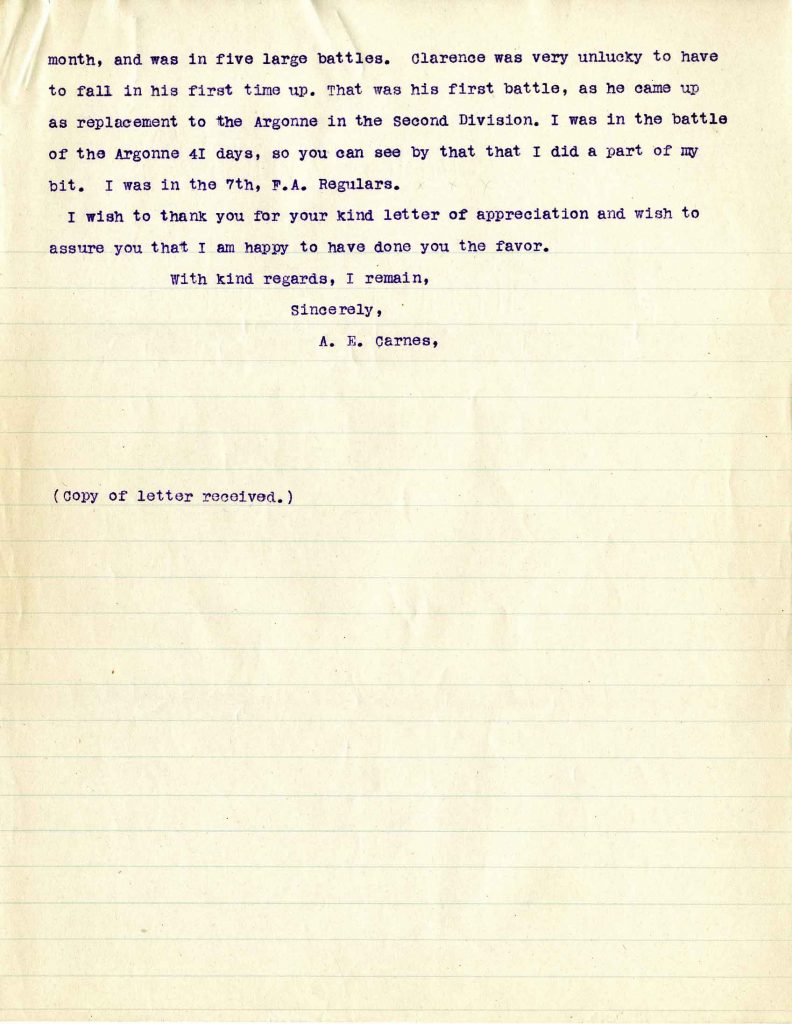 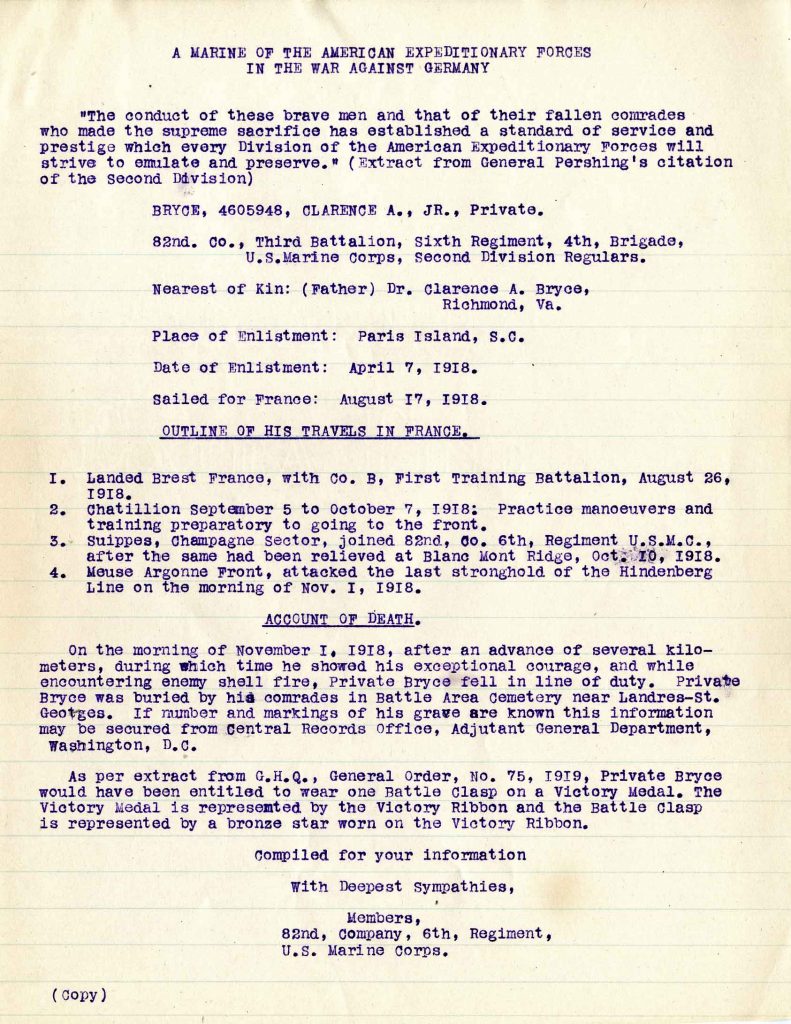 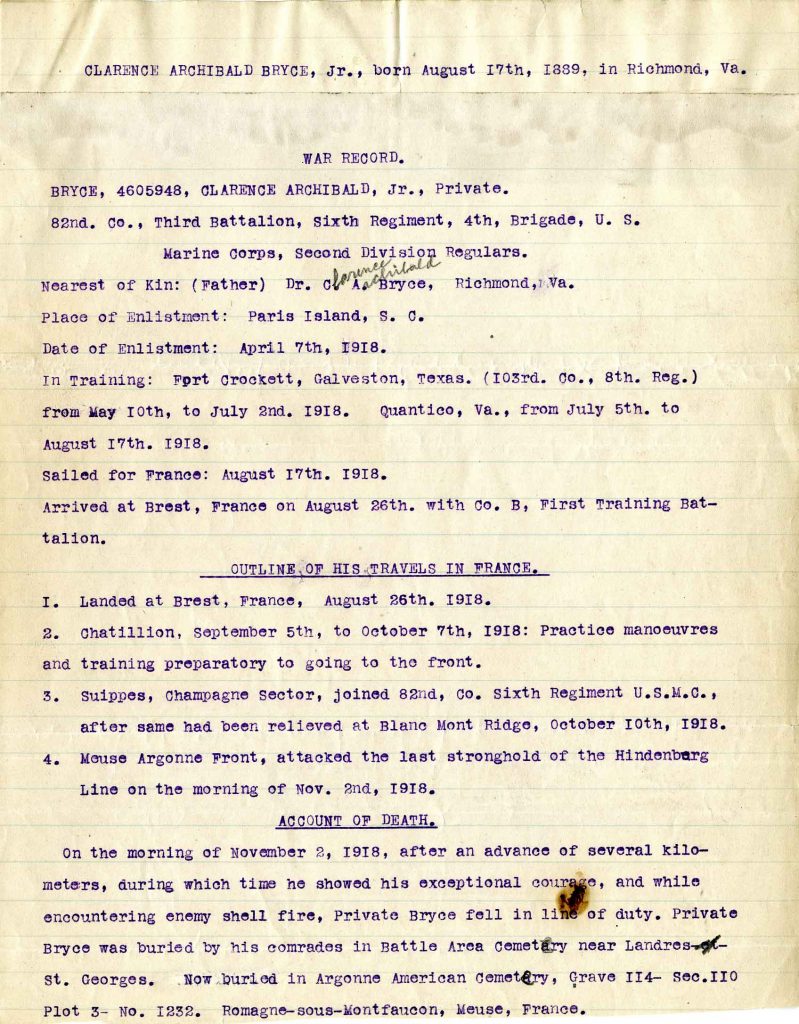 Over the course of the anniversary of America’s involvement in World War I, Out of the Box will be featuring posts related to the war and our collections. Many of these will be drawn from the Virginia War History Commissions questionnaires, available online, which contain a wealth of information and often lead to records in other parts of the collection. Check back regularly to learn more about the experiences of Virginians in the Great War.