Drying Out Dixieland: The Confederacy and Prohibition

What do prohibition and the American Civil War have in common? More than you may think. The debate over prohibition in Virginia, which culminated in Virginia going “dry” on 1 November 1916, occurred during a period of sectional reconciliation between the North and the South. In November 1912, Woodrow Wilson became the first southern Democrat elected President of the United States since the Civil War; Union and Confederate troops held a reunion in Gettysburg in July 1913; and in 1916, a Confederate Memorial was created at Arlington National Cemetery. However, as the country was becoming less divided over the war, new divisions arose over prohibition. Over the course of state and later national prohibition, both opponents and proponents used the memory of the Civil War and especially the Confederacy to support their positions. 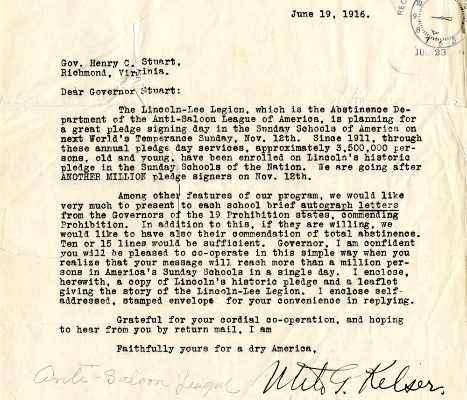 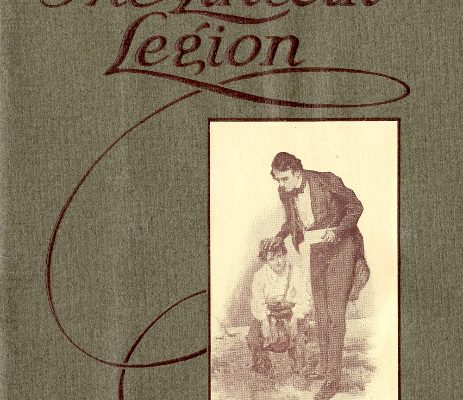 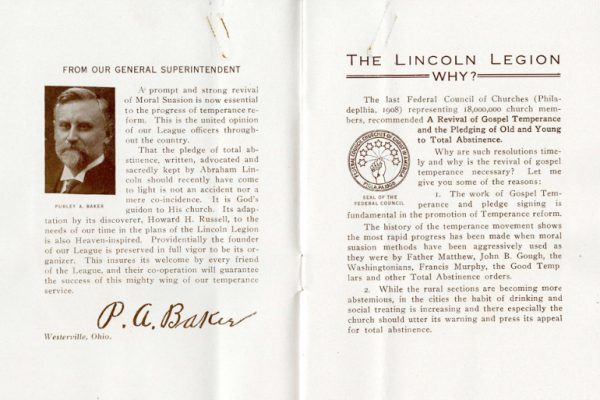 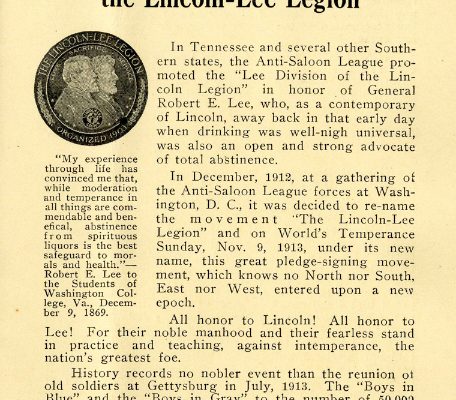 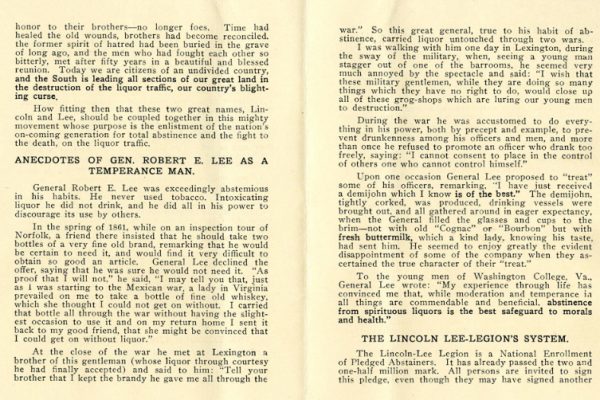 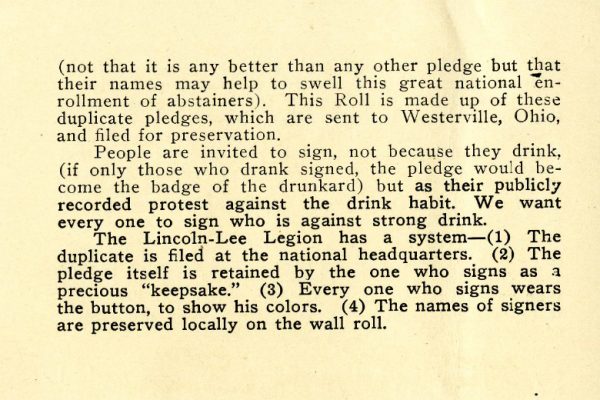 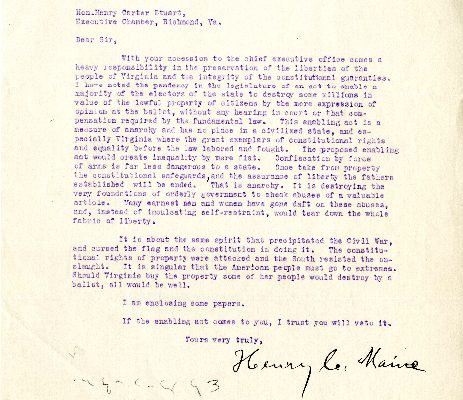 A 1914 anti-prohibition tract from the Virginia Association for Local Self-Government proclaimed that “a large majority of Virginians are free and independent and will not bend to the lash of the invader’s whip.” The Anti-Saloon League (derisively referred to by opponents as the Ohio Anti-Saloon League) faced problems in much of the former Confederacy due to its northern origins, as well as the strong antebellum links between the temperance and abolitionist movements. Although organizations such as the Women’s Christian Temperance Union (WCTU) flourished in Virginia starting in the 1880s, the Virginia Anti-Saloon League (ASL) was not founded until 1902, coinciding with the convening of Virginia’s constitutional convention. Even after the ASL established a foothold in Virginia, attempts to create a state-wide policy on prohibition were hampered by strong tendencies towards localism. By 1909, almost every county in the state had voted through local option to eliminate alcohol, but attempts to introduce a referendum on state-wide prohibition were blocked twice more before the success of the Williams Enabling Act in 1914.

The ASL had successfully played on the memory of Abraham Lincoln in support of temperance, drawing on his statements in an 1842 address to develop the Lincoln Legion for young temperance advocates, who promised “to keep the following pledge, written, signed and advocated by Abraham Lincoln…to abstain from the use of intoxicating liquors as a beverage.” The Lincoln League was founded in 1903, providing pledge cards to children during pledge drives at churches, Sunday schools, and temperance meetings. In 1912, however, the ASL was ready to expand the geographic reach of the Lincoln League, and they did so by creating a “Lee Division” and then in 1913 amending the name to the Lincoln-Lee Legion, reflecting broader patterns of reconciliation fifty years after the Civil War. The new legion touted Robert E. Lee as temperance man, providing anecdotes of his resistance to the evils of alcohol.

Anti-prohibition advocates also invoked the Confederacy in their arguments. Governor Henry C. Stuart, who would be “outed” for his personal support for local option as opposed to state-wide prohibition, received a flurry of correspondence on both sides. One letter from Henry C. Maine compared the attempt to institute state-wide prohibition to “the same spirit that precipitated the Civil War” as “constitution rights of property were attacked and the South resisted the onslaught.” The Virginia Association for Local Self-Government sent Stuart a pamphlet of their own, with the cover showing a disabled Confederate veteran proclaiming “I fought for [Home Rule and Local Self-Government] in 1861; I will vote for this in 1914.” The association claimed that “many of the foremost advocates of Local Option in Virginia are ex-Confederate soldiers,” with pure and blameless motives. 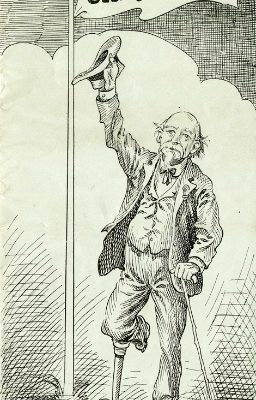 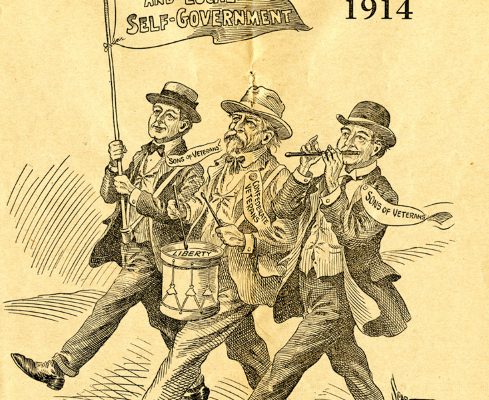 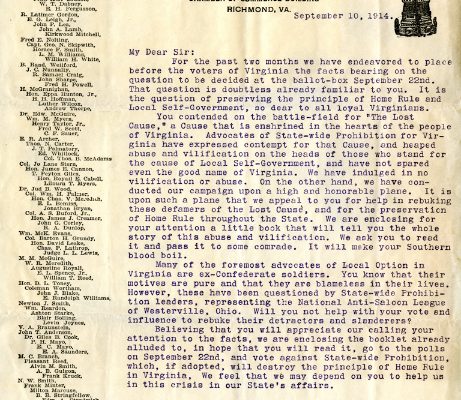 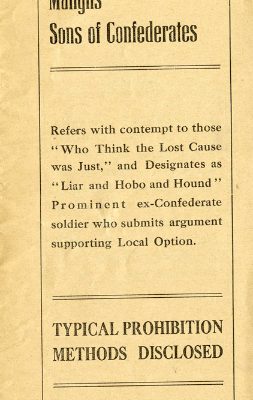 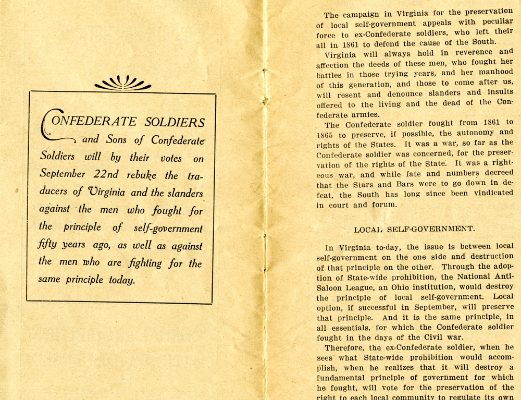 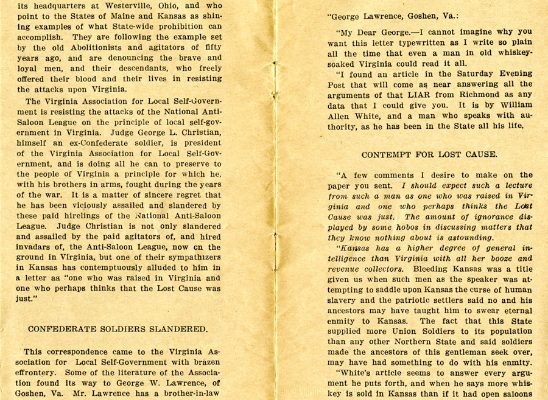 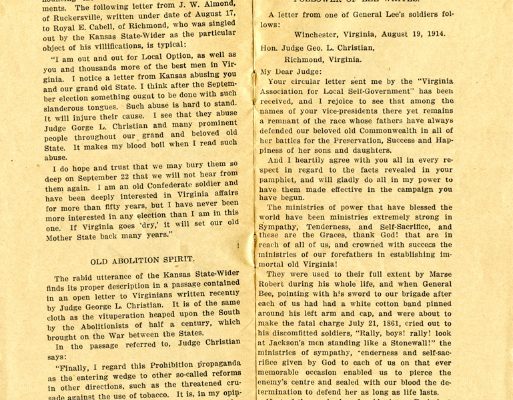 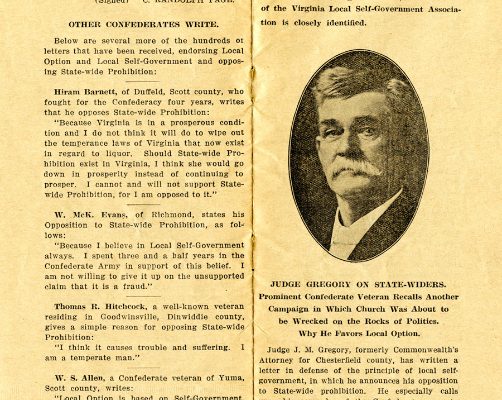 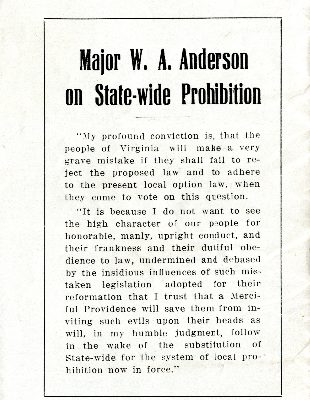 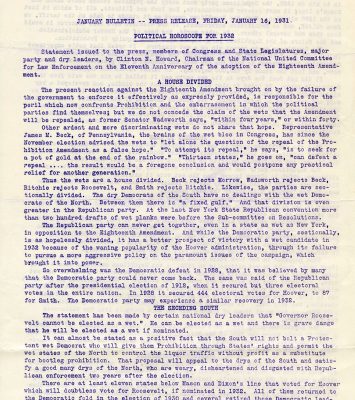 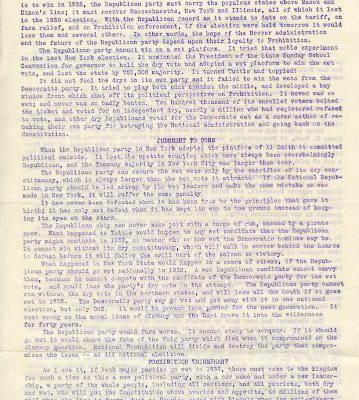 As Prohibition’s end drew near in 1931, the National United Committee for Law Enforcement released a “Political Horoscope for 1932,” which claimed that the election of Franklin D. Roosevelt as a wet would appeal to southern states, since he would “give them Prohibition through States’ rights and permit wet states of the North to control the liquor traffic without profit as a substitute for bootleg prohibition.” This section of the ‘horoscope,’ titled “The Seceding South,” contended that Herbert Hoover would lose the votes of at least eleven southern states to Roosevelt in the 1932 election; in fact, Hoover carried only six states in the election, none below the Mason-Dixon Line.

Prohibition came to an end in 1933. On 22 March, FDR signed an amendment to the Volstead Act, which had previously defined an intoxicating beverage as one with greater than 0.5% alcohol, to allow the manufacture of 3.2% beer and light wines. The Virginia General Assembly did the same in a special session on 17 August 1933. On 3 October 1933, Virginia held a special election to decide whether they should continue state prohibition once national prohibition was repealed or instead replace it with a “plan of liquor control.” Virginian voters favored an end to state prohibition by a vote of 99,640 to 58,518, and voted to create a liquor control plan by a vote of 100,445 to 57,873.

The next day, Governor John G. Pollard, who was himself a dry, received a telegram from the president of the American State Rights Association, congratulating him on Virginia’s “return to historical position on states [sic] rights.” 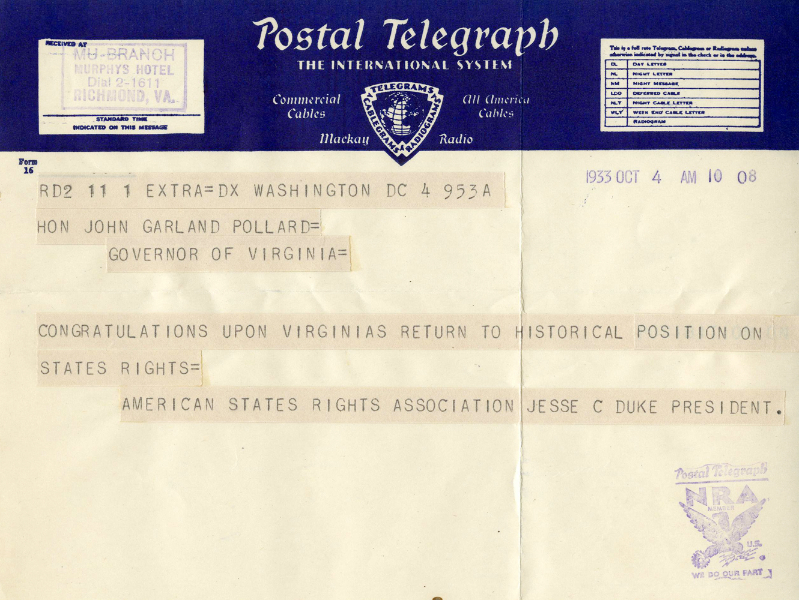