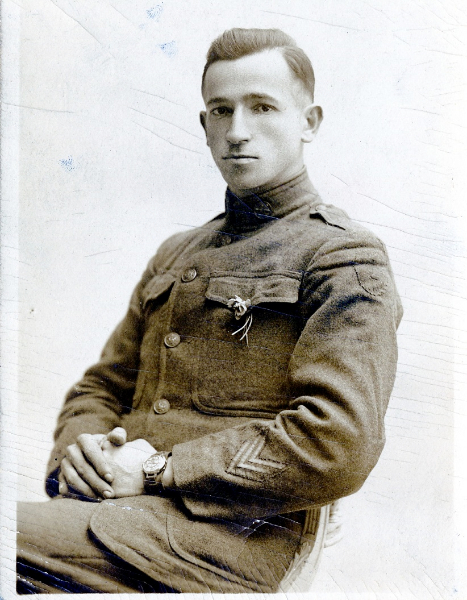 Mapping No-Man’s-Land: The Official War Atlas of the 1st Division, A. E. F.

Between 1928 and 1930, the federal government published the official records of the 1st Division, American Expeditionary Force (AEF). The Library of Virginia recently conserved an atlas that complements those twenty-four massive volumes. Maps are, of course, crucial in warfare, and these twenty-six base maps and forty-two overlays provide topographic documentation of portions of the American—and Virginian—involvement in World War I. 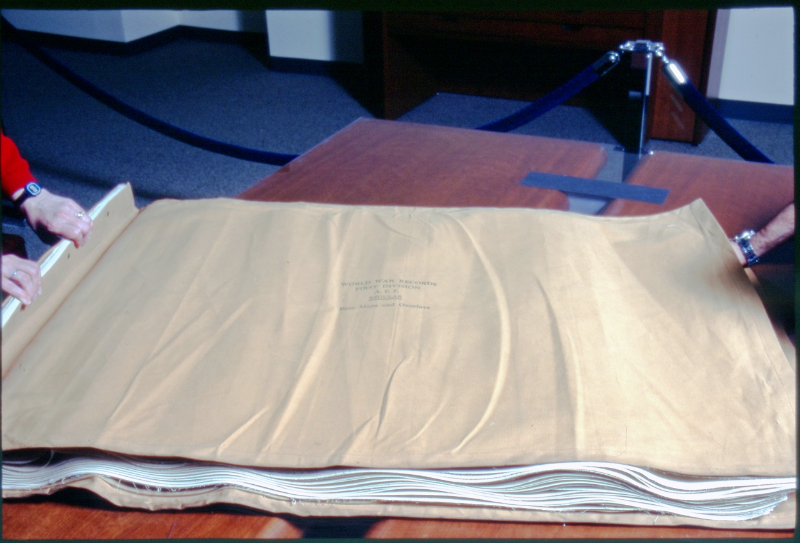 The federal government distributed the canvas-bound atlas with the 1st Division’s published records in the early 1930s. Army cartographers and engineers at Fort Humphreys, Virginia (now Fort Belvoir) and Fort DuPont, Delaware (now a state park), created the atlas using French Cartographic Service maps purchased in 1928. The army made the overlays with lithography and reproduced original maps with mimeographs. Numbers on the overlay maps correspond to coordinates on the base maps, allowing the researcher to see precise positions of enemy lines, mustard-gas concentrations, machine gun nests, and the like. The army cartographers characterized these maps and overlays as “exact reproductions of all available maps, sketches, charts, etc., showing all of the troop dispositions, operations, plans, situation reports, diagrams, [and] barrage charts…which have been found in the World War Records of the First Division.”

The maps nearly languished in obscurity in the Library’s archives storage. They came to the Library of Virginia from the Virginia Historical Society in February 1949. They found a home on top of a map case in archives storage, presumably because the bulky roll did not fit into any storage cases. There the roll stayed, protected by its canvas cover, for nearly fifty years. However, Marianne McKee, map specialist and senior research archivist at the Library, recognized their unique nature and found their connection to the AEF’s official records.

The Library’s conservation lab humidified the rolled maps to relax the paper and then flattened them between blotter paper. Conservators then flat-filed the maps (retaining their original canvas cover), added acid-free cardboard for support, and created and oversized, acid-free folder for the forty-two overlays. The tissue-thin overlay maps also required deacidification. Using a solution of methyl magnesium oxide (also known as Bookkeeper’s Solution), the conservation team neutralized the escaping paper acids and then encapsulated the delicate overlays. The maps are now housed in a map case in archival storage and are available to patrons through the Library’s on-line catalog.

The maps provide a glimpse into the overall military activities of the AEF, specifically the storied 1st Division. Also known as “The Big Red One” for the blazing-red number 1 on its unit patch, the 1st Division, which saw action in World War I at Cantigny and during the Aisne-Marne, Saint-Mihiel, and Meuse-Argonne offensives, has been immortalized in print and motion pictures. Initially designated the 1st Expeditionary Division, it was organized in May 1917 from units in General John J. “Black Jack” Pershing’s Southern Department and other U.S. posts. The division originally comprised the 16th, 18th, 26th, and 28th Infantry Regiment; the 5th, 6th, and 7th Artillery Regiments; the 1st, 2nd, and 3rd Machine Gun Battalions; the 1st Trench-Mortar Battery, 2nd Field Signal Battalion, 1st Engineer Regiment, and Headquarters Troop. The division added to its fame in World War II and in Vietnam.

The men of the 1st Division, which included several Virginians, were the first Americans to join the battle in Europe against the Central Powers. Many of the soldiers earlier had participated in the Mexican Punitive Expedition, an effort to capture Francisco “Pancho” Villa in northern Mexico. One Virginian was Nathan Peltz of Newport News, who served in Battery E, 5th Field Artillery Regiment. Peltz participated in engagements in the Sommerviller and Ansauville sectors and the Saint-Mihiel and Meuse-Argonne offensives and commented on them in his questionnaire for the Virginia War History Commission. His experience taught him “that all men were alike, as the Angel of death was anything but discrimination.” Peltz’s religious convictions suffered due to the war as well. As for the war’s effect on his state of mind, Peltz replied that he was the same, “with the exception of religion,” for the war had “made an infidel of myself.” Overlay Map 1 of the 1st Division atlas shows the artillery deployment at the Sommerviller Sector, October-November 1917, where Peltz fought. 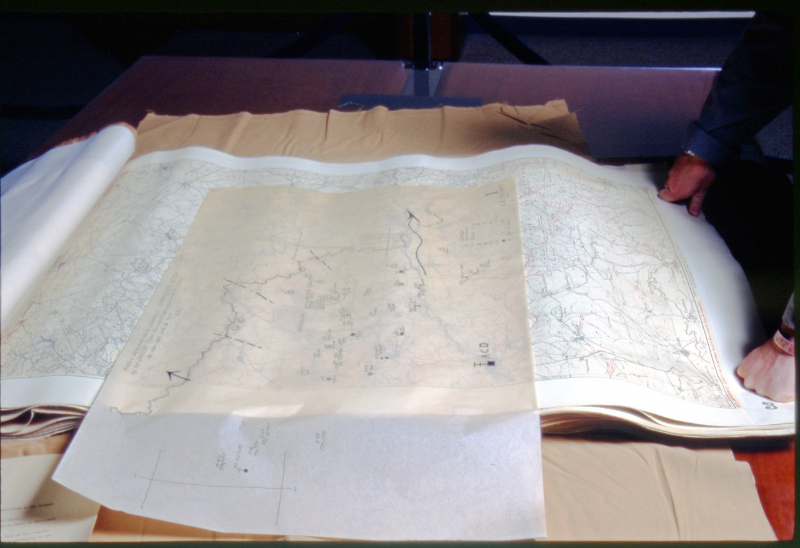 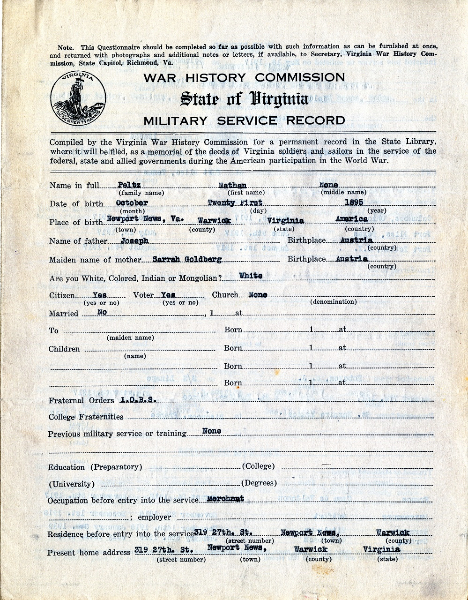 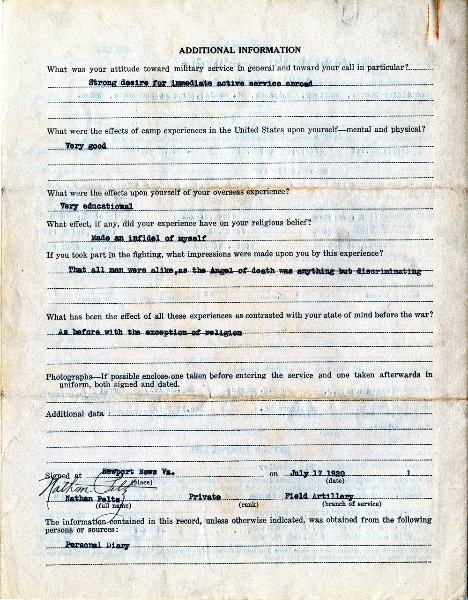 Captain Horace Lilburn Smith Jr., Company F, 1st Engineer Regiment, was a graduate of Virginia Military Institute and a resident of Petersburg. He described to Governor Westmoreland Davis some of the harrowing experiences of the 1st Division during the attack on Cantigny on 28 May 1918. “From the day that we went into the line there until May 28th there was almost a continual barrage from both sides—the artillery fire was fearful,” Smith wrote. He and his company were ordered to join the 28th Infantry Regiment to take the town of Cantigny. A high-angle trench mortar exploded in a quarry the soldiers were using for cover. “Out of the seven of us that were to go over,” Smith wrote, “three were put out of business before the zero hour.” The atlas contains overlays documenting the enemy artillery dispositions, plans of defense, and artillery barrage plans for the Cantigny Sector. The deadly challenges that Smith and the 1st Engineers faced are represented in the atlas’s overlay group on the Cantigny Sector, Cantigny Operation, and the Montdidier-Noyon Defense (Overlays 7-17).

The atlas complements not only the official records of the 1st Division, but other records at the Library as well. It can be used in conjunction with the World War I History Commission records  and the World War I Selective Service System Draft Registration Cards, 1917-1918. Along with these records, the atlas traces the service of Virginians like Nathan Peltz and Horace Smith Jr. during World War I.