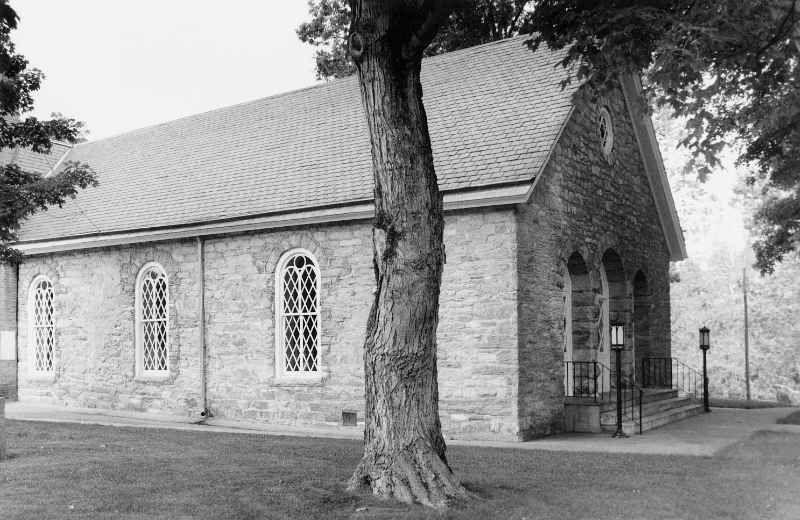 Editor’s Note: The Library of Virginia, in partnership with the Virginia Foundation for the Humanities, sponsored four residential fellows for the 2016-2017 academic year to conduct in-depth research in the Library’s collections. Doug Winiarski, Religious Studies professor at the University of Richmond, spent the spring semester researching and writing Shakers, Jerkers & the Shawnee Prophet: Religious Encounters on the Early American Frontier, 1805-1815.

Samuel Houston probably scoffed at the legal proceedings against him as he stood before the bar in the Lexington, Virginia, courthouse on 6 August 1805. How could his peers on the grand jury take this case of assault and battery seriously? After all, he was one of the most prominent men in the Rockbridge County: a decorated Revolutionary War officer, a wealthy planter, and a slaveholder. Most important, Houston was a devoted member and patron of the Timber Ridge Presbyterian Church, the handsome stone edifice that stood only a few yards from his imposing log house.

The charges against Houston stemmed from a bizarre new religious phenomenon known as “the jerks”: involuntary convulsions, in which the subjects’ heads lashed violently backward and forward in quick succession like a “flail in the hands of a thresher.” The strange bodily fits erupted unexpectedly during the Great Revival (1799–1805), the powerful succession of Presbyterian sacramental festivals and Methodist camp meetings that played a formative role in the development of the southern Bible Belt.

Originating in east Tennessee during the summer of 1803, the jerks spread rapidly into the Kentucky Bluegrass country, the North Carolina piedmont, southern Ohio, and the Great Valley of Virginia. By the spring of 1805, they had appeared among students at Washington Academy (now Washington and Lee University) and within the adjacent Scots-Irish congregations of the upper Valley. Worried members of the Lexington Presbytery responded by issuing a directive enjoining their colleagues to “prevent as far as may be in their power, all extraordinary bodily exercises which appear voluntary and ostentatious.” 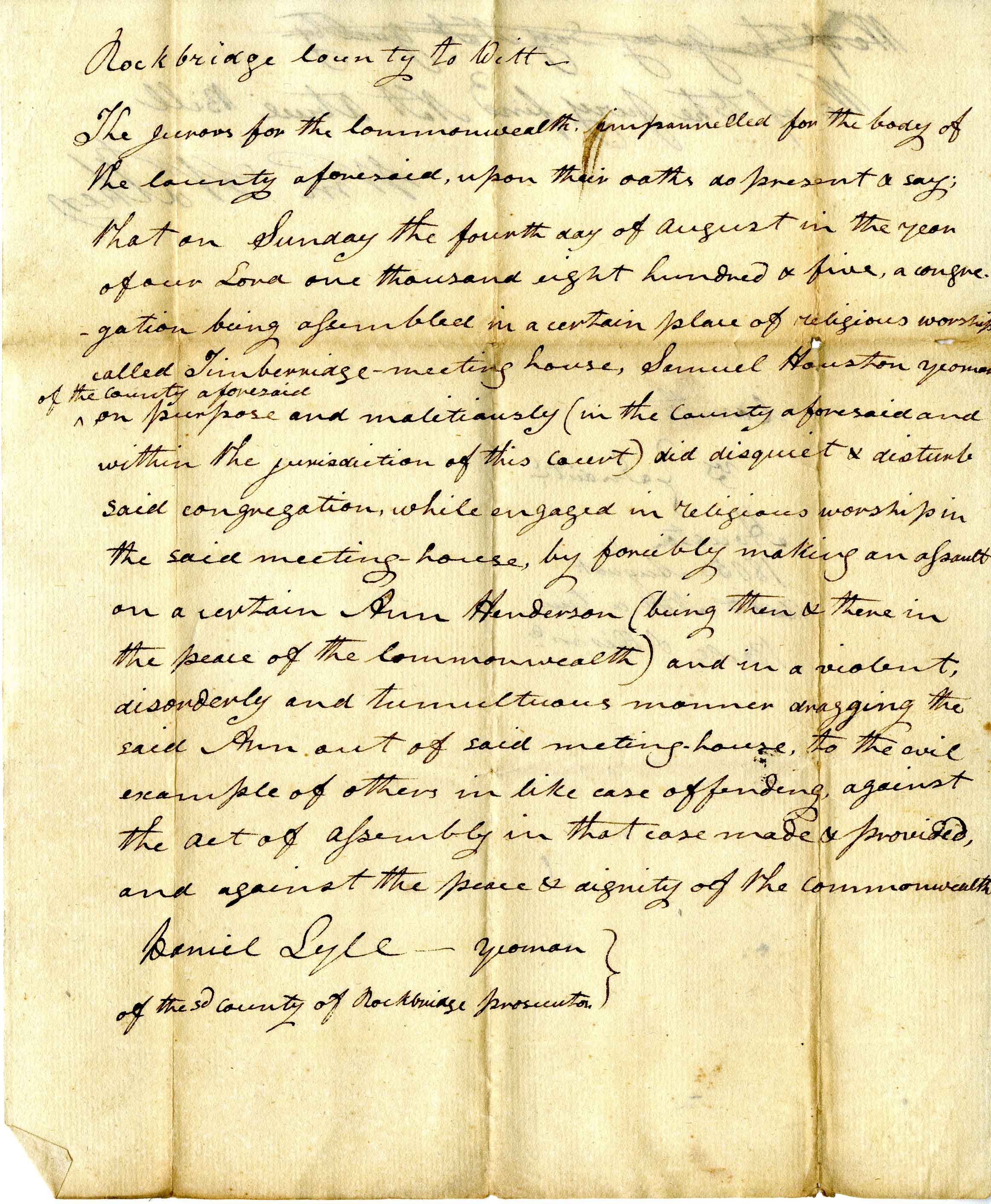 When Ann Henderson began jerking uncontrollably during a Sabbath meeting at the Timber Ridge meetinghouse on 4 August 1805, Houston sprang into action. He seized the young woman, pulled her out of the church, and heaved her twitching body into his house, where he kept guard for the next several hours. Single and in her teens at the time of the incident, Henderson was a marginal member of the Timber Ridge community. She may have been an orphan or an indentured servant. Houston presumed that he was preserving church order, but other members of the congregation saw things differently. In the words of the legal complaint filed on the young woman’s behalf, Houston “on purpose and malitiously…did disquiet & disturb” the Timber Ridge congregation “while engaged in religious worship” by “forcibly making an assault on a certain Ann Henderson” and in a “violent, disorderly and tumultuous manner dragging” her out of the meetinghouse, “to the evil example of others” and “against the peace & dignity of the Commonwealth.”

English common law provided for a range of justifying circumstances in alleged cases of assault and battery. Among them was a provision allowing church officers to “lay hands” on unruly parishioners and escort them from the building to preserve the order of worship services. The commonwealth’s case against Houston, therefore, hinged on the nature of the jerks. What caused the bodies of revival converts such as Ann Henderson to thrash about like a “fish when thrown out of the water”? Were these spasmodic gesticulations of neck and head disrupting the meetings of the Presbyterian churches in the Valley? For many observers, the involuntary convulsions were merely a mechanical response of the subjects’ nervous systems when exposed to the relentless preaching on the terrors of hell and the necessity of conversion. For others, the jerks were a sign of the miraculous descent of God’s Holy Spirit. If Henderson’s fits resulted from physiological causes, then Houston would have been justified in removing her from the meetinghouse. But it was also possible that his forceful intervention had stifled the movement of the Holy Spirit during a legitimate, albeit boisterous revival meeting. In effect, the Rockbridge County magistrates were being asked to adjudicate the authenticity of a seemingly supernatural bodily phenomenon.

When the court convened two days later, the grand jurors voted “Not a true Bill” and refused to indict Houston. The justices immediately dismissed the case. Undaunted, Henderson redoubled her efforts by initiating a civil suit the following October. Filed on her behalf by fellow Timber Ridge parishioner Samuel Lyle, the second complaint charged Houston with assaulting and incarcerating Henderson for more than two hours “without any reasonable cause…so that her Life was greatly despaired of.” Lyle demanded five hundred dollars damages in compensation for the young woman’s cruel treatment. During the November session of the Rockbridge County court, however, the assembled justices declined to hear the case. Lyle’s civil suit was dismissed in an office judgment, and he was ordered to pay the resulting court fees. Adding insult to injury, Houston turned around and sued Lyle and Henderson to recover his legal expenses. In March 1806, he won a judgment against Lyle for $3.80. 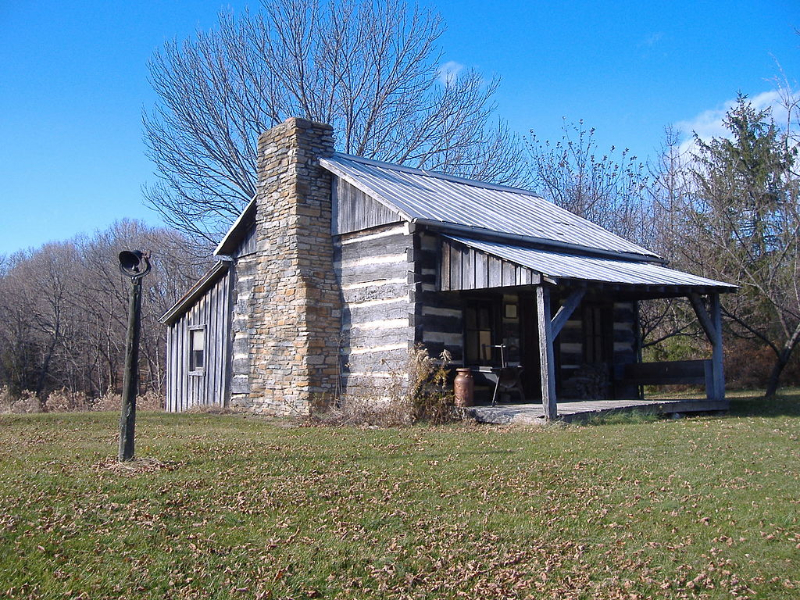 So ended one of the more unusual religious conflicts in Rockbridge County history. During the years following the controversial case, Samuel Lyle continued to worship at Timber Ridge. In 1815, he pulled up stakes and moved to Highland County in southern Ohio, where he purchased a 400-acre farm and built a small log cabin still standing today. Samuel Houston died in 1807. His widow, Elizabeth, later moved to Maryville, Tennessee, which, oddly enough, was the site of the first recorded outbreak of the jerks several years earlier.

She was accompanied by her son and husband’s namesake, who would eventually be elected president of the Republic of Texas. Ann Henderson vanished from the historical record. Whether she died early, married, or moved away from Rockbridge County remains a mystery.

As for the jerks, most clergymen eventually discredited the strange religious phenomenon. They soon faded from sight, at least among Presbyterians and Methodists. “I am fully convinced,” Washington Academy president George Baxter noted in 1832, “that the bodily exercise, and the disorders to which it gave rise, were of unspeakable injury to the church” during the heady years of the Great Revival. But in the hills and hollows of Kentucky, Tennessee, and West Virginia, members of independent Holiness and Pentecostal churches have retained their faith in the power of Holy Spirit to animate the bodies of the faithful. Pejoratively dismissed as “holy rollers,” the spiritual descendants of jerkers such as Anne Henderson continue to practice their distinctively embodied form of evangelical Protestantism. 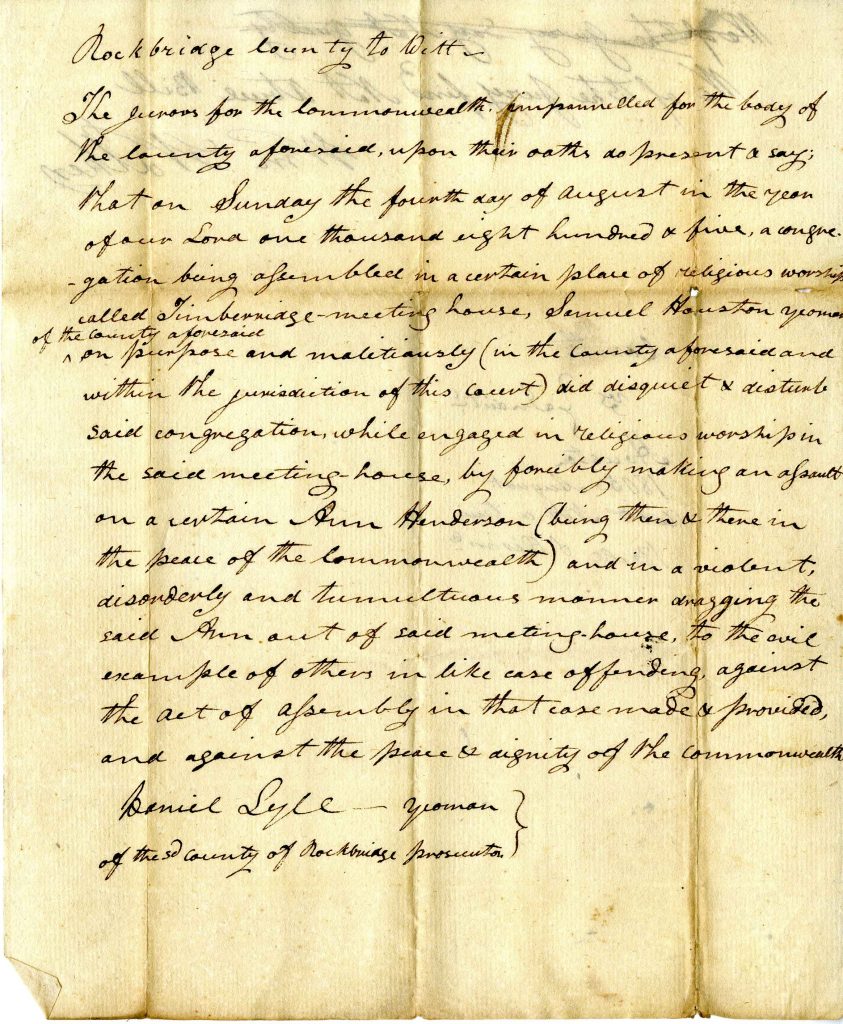 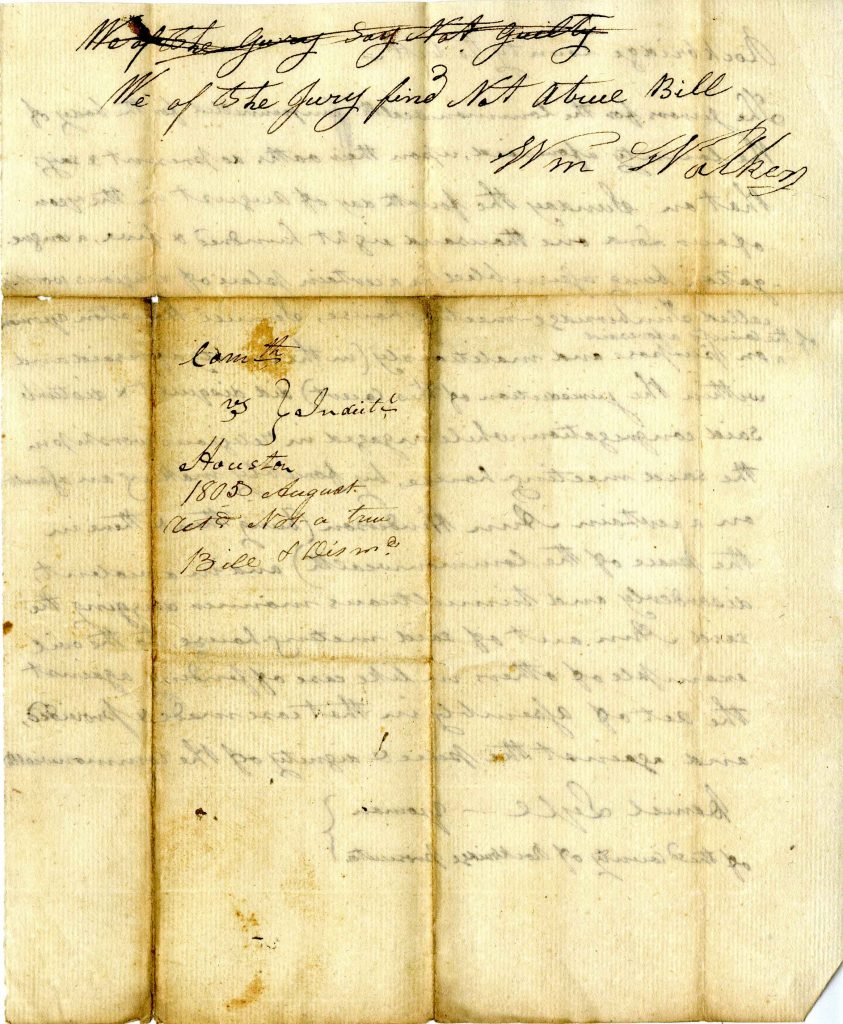 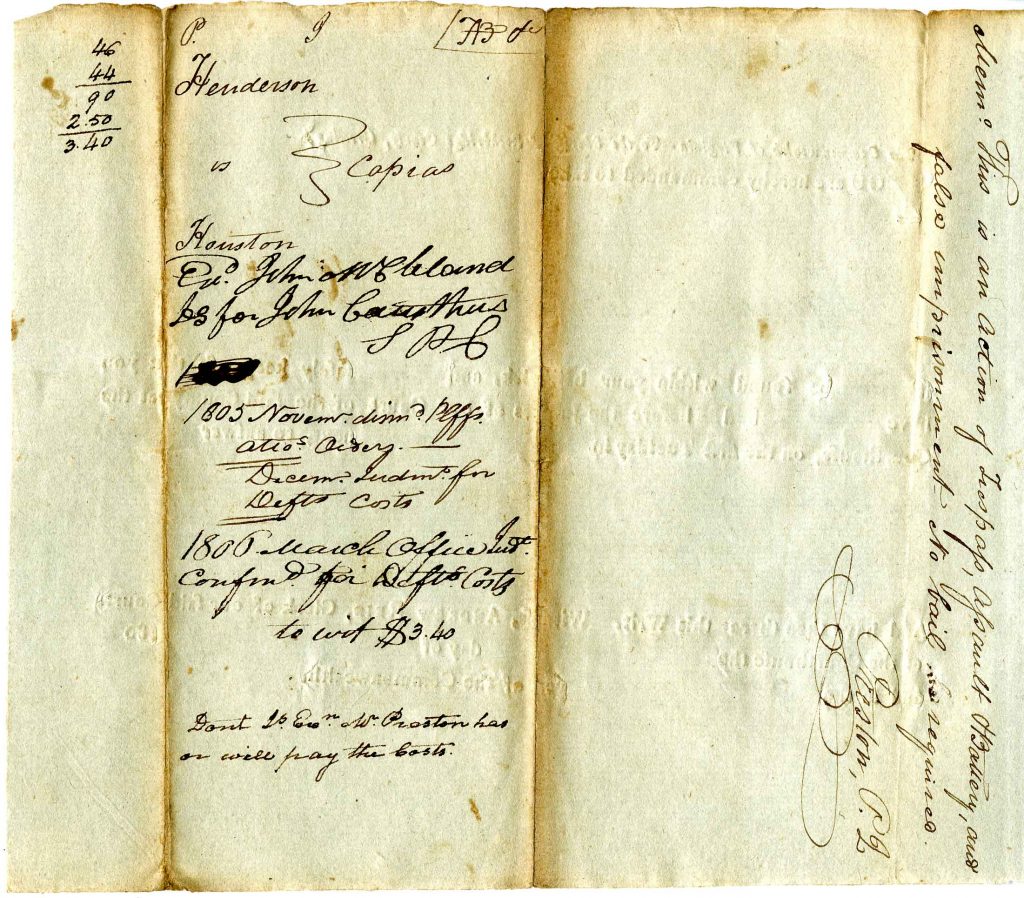 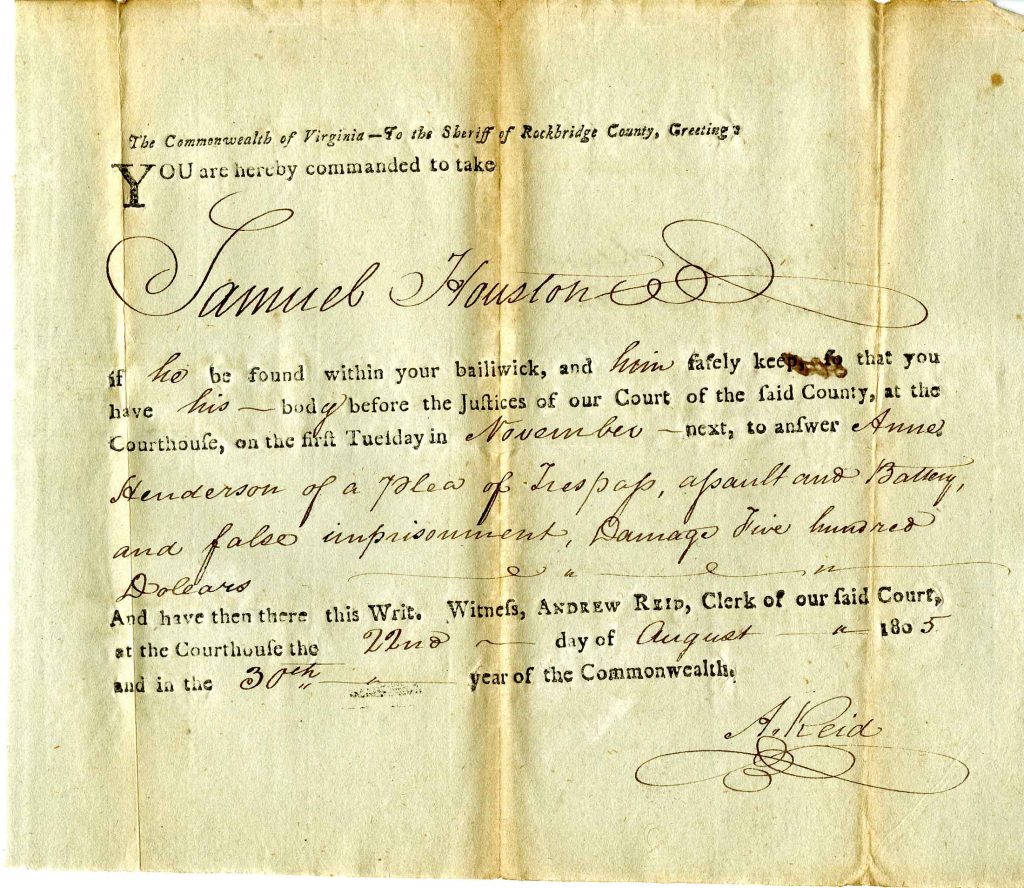 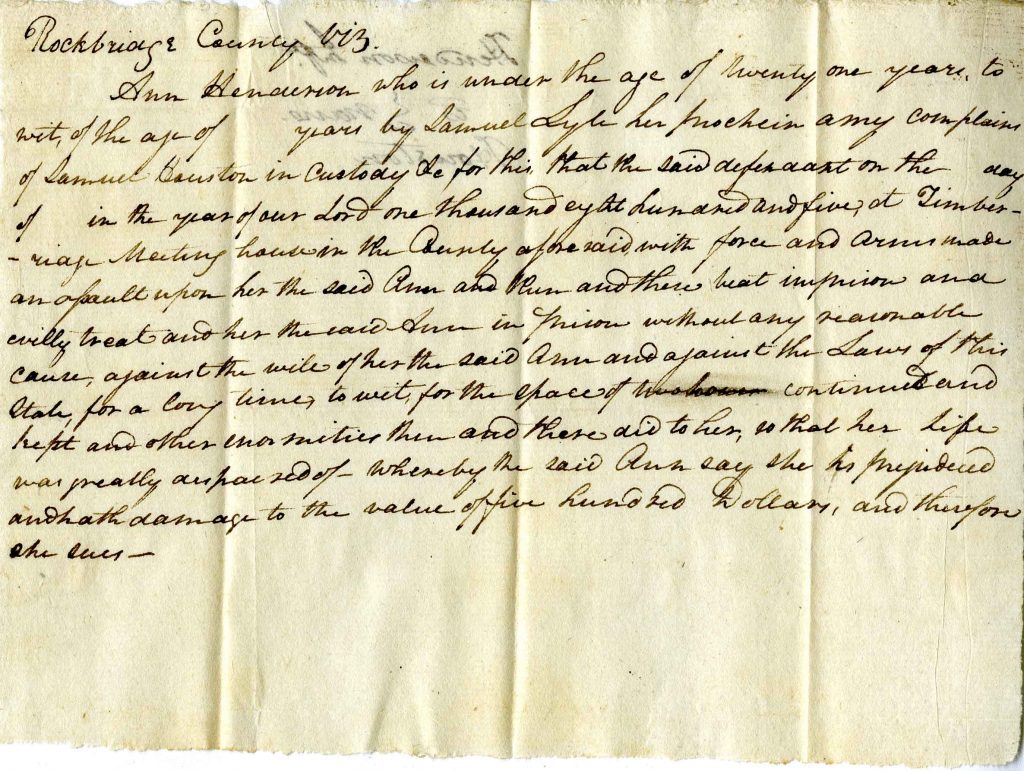 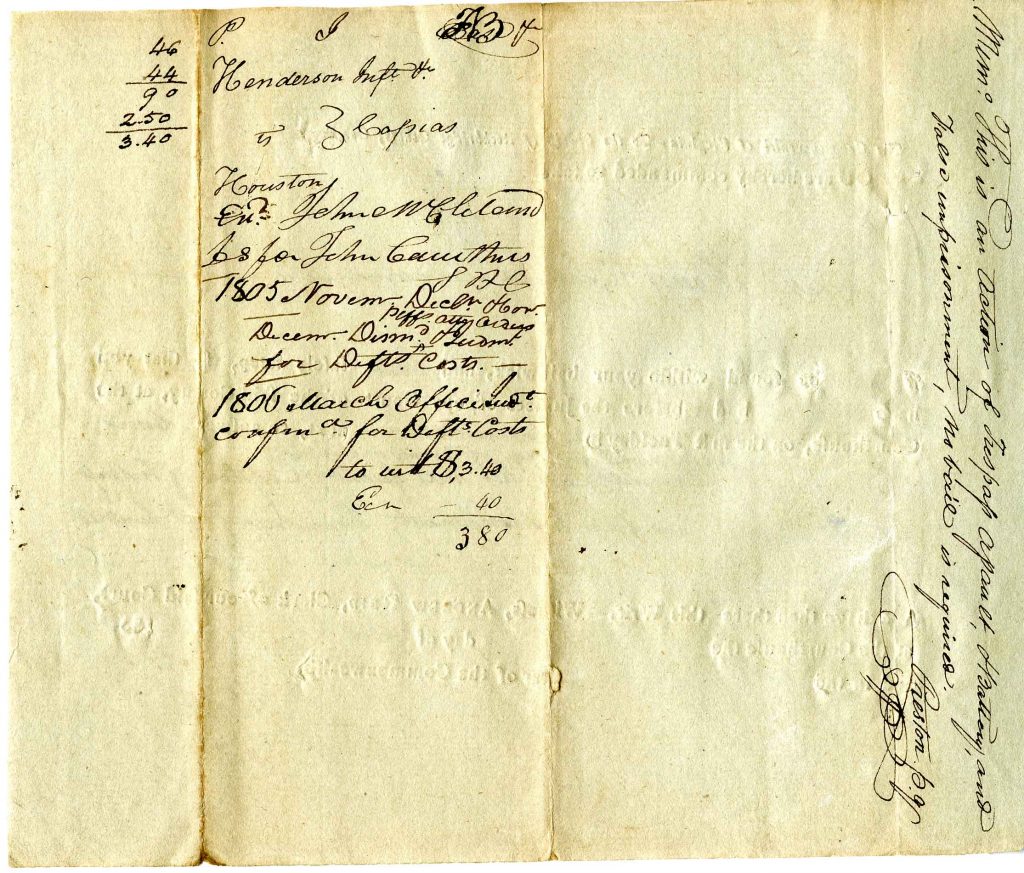 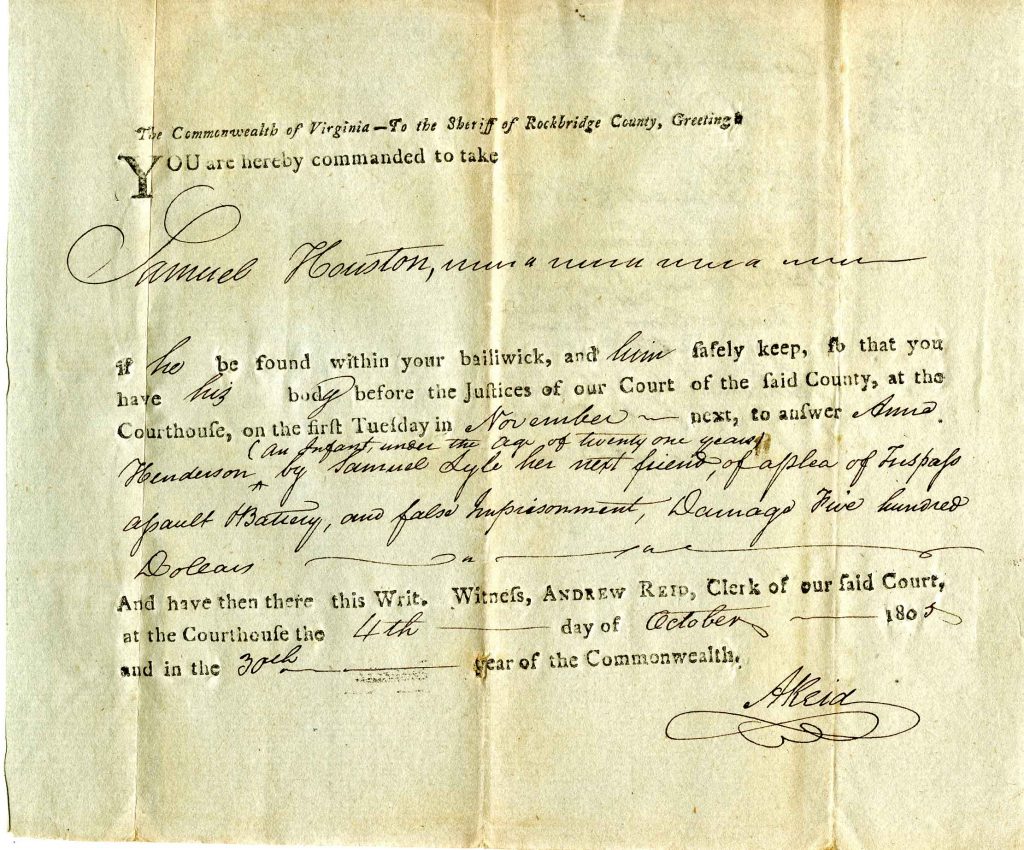 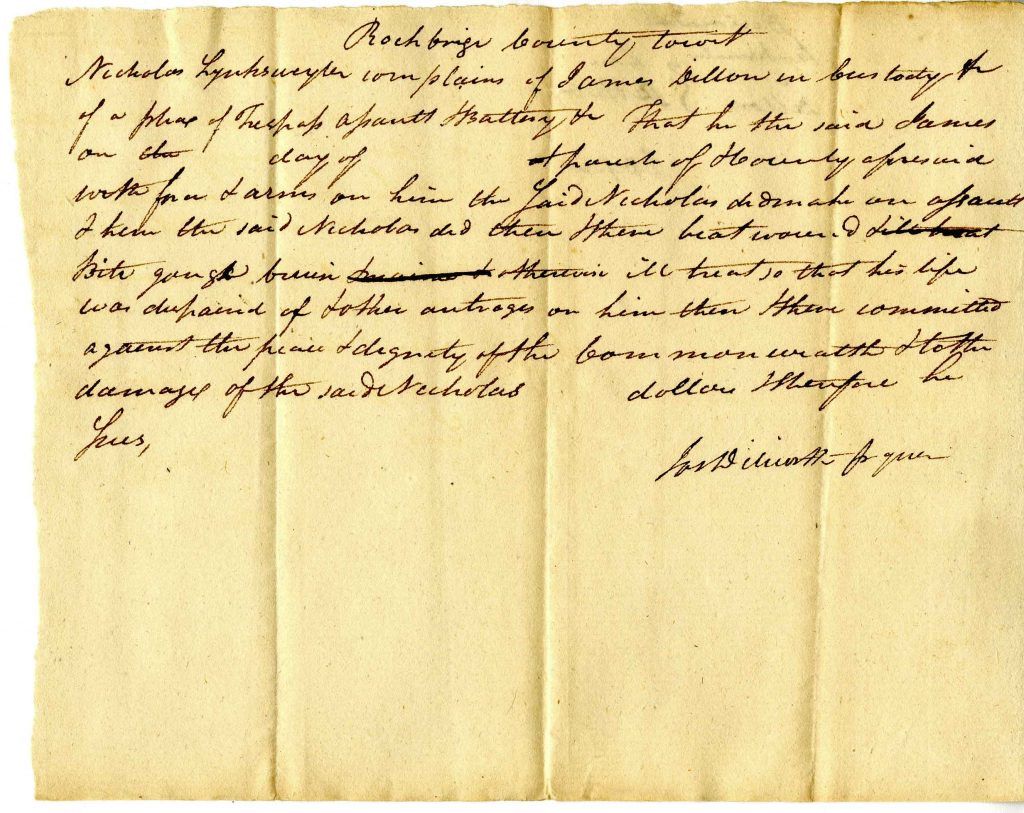 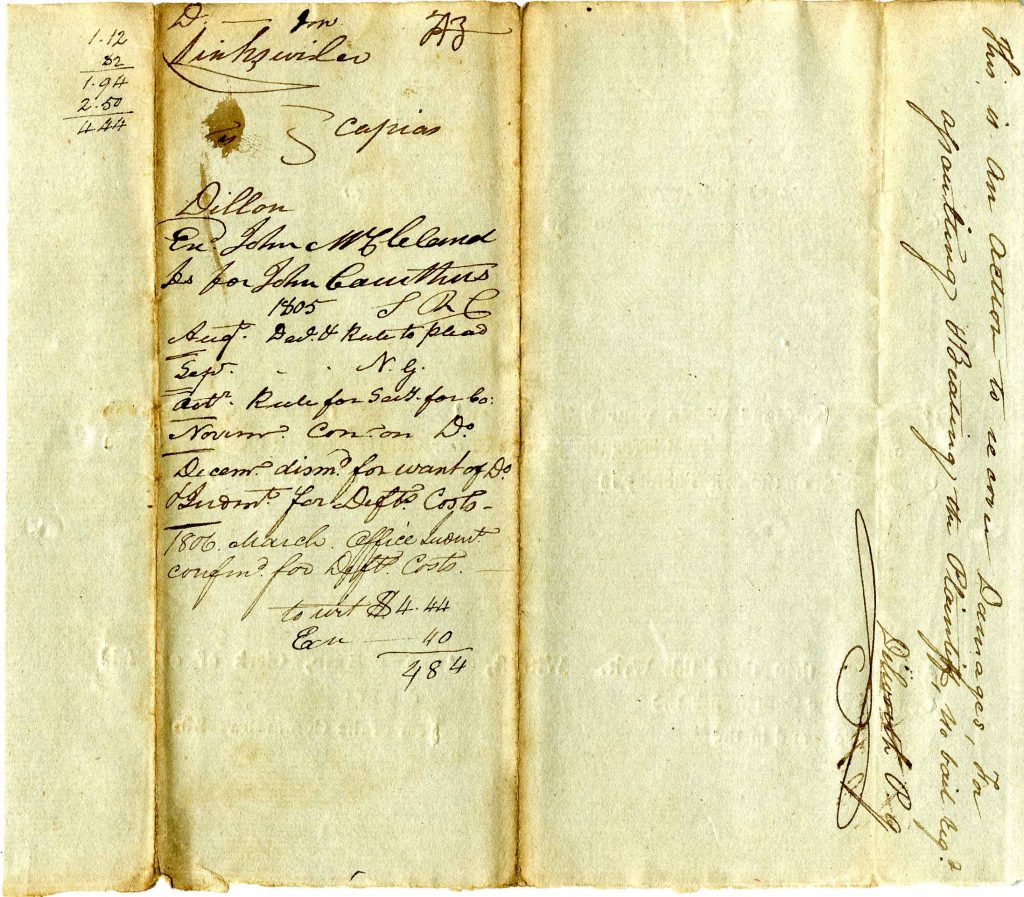 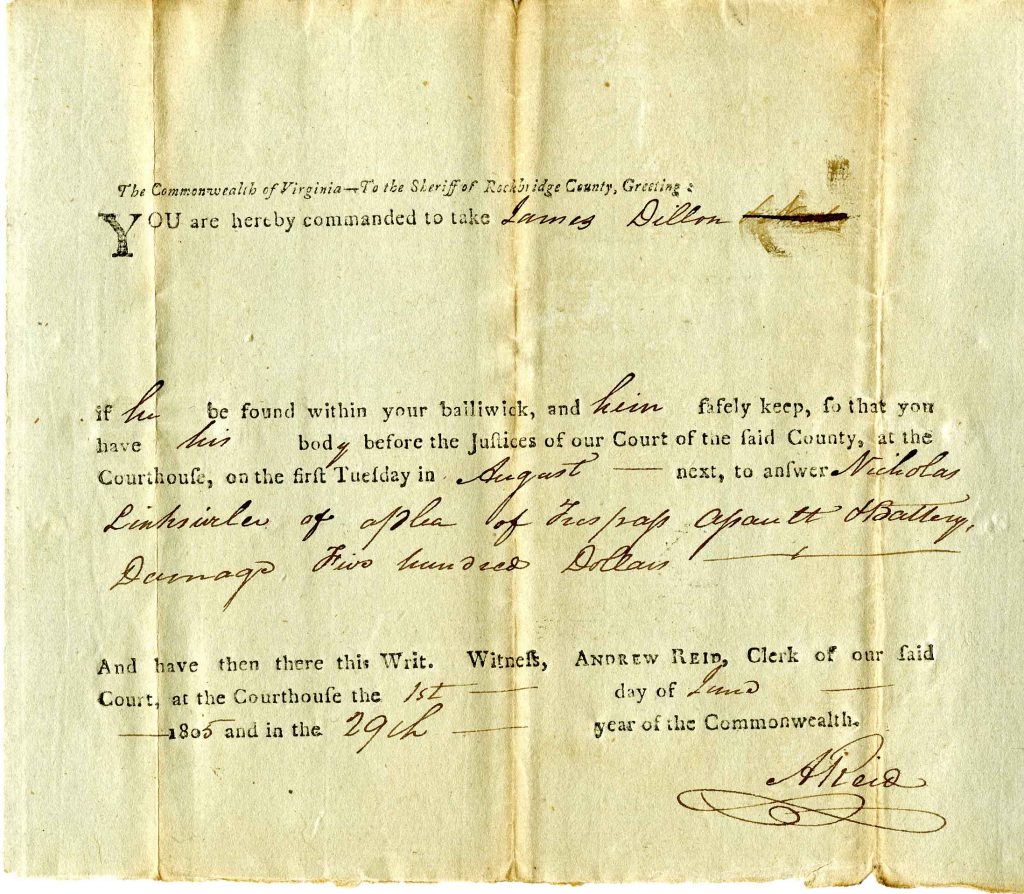 The trial records for Commonwealth v. Houston, Henderson v. Houston, and Houston v. Lyle may be found in:

All are open for research and available at the Library of Virginia.

Oren F. Morton included crucial, although unsubstantiated details on these cases not found in extant court records in A History of Rockbridge County, Virginia (Staunton, Va., 1920), 173.

For a more detailed discussion of the jerks and the Great Revival, see Douglas L. Winiarski, “Shakers & Jerkers: Letters from the Long Walk, 1805,” Journal of East Tennessee History (forthcoming 2017).