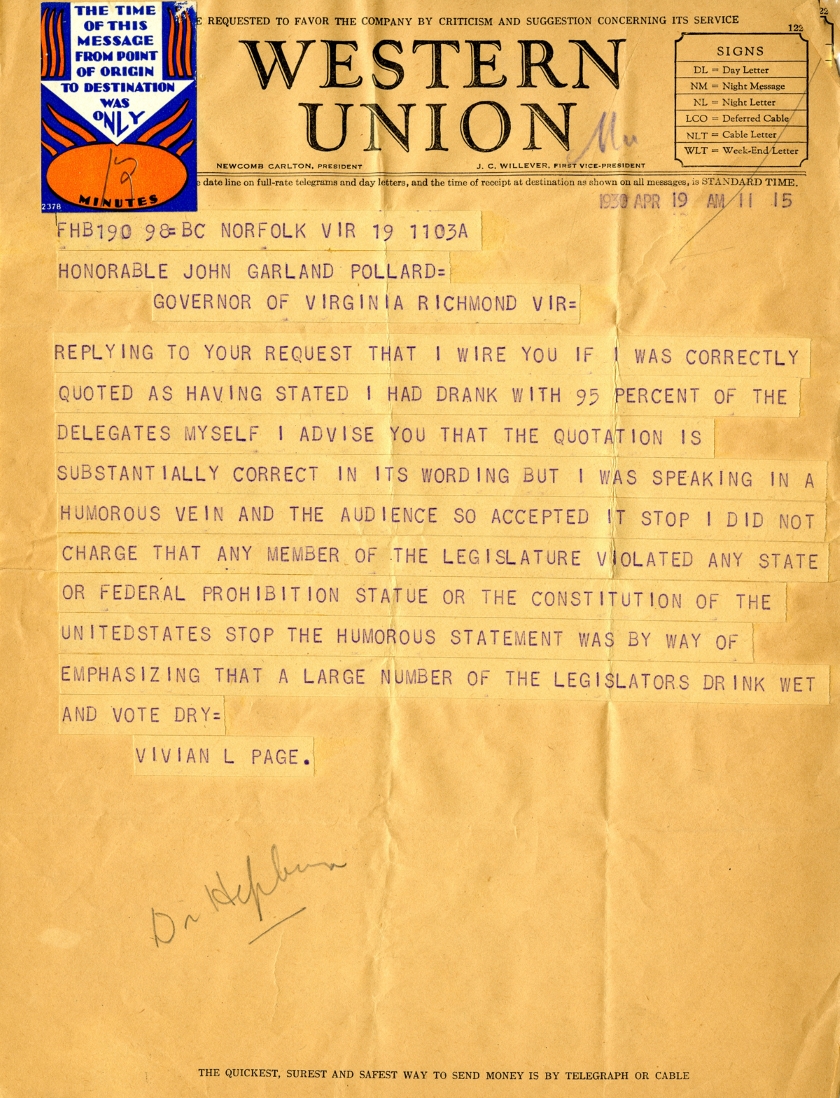 One of the hallmarks of the age of Prohibition is a certain level of contradiction. After all, the country was supposed to be entirely dry; the 18th amendment, passed in 1920, prohibited the manufacture, sale, or transportation of alcoholic beverages. And yet the 1920s are best remembered for the culture of speakeasies and flappers, flasks hidden in garters or walking sticks, and bootleggers, mobsters, and moonshiners. The prohibition movement had always been dogged by the hypocritical beliefs of political leaders who supported the general outlawing of alcohol but saw no reason to restrict their own consumption. Even Governor Harry F. Byrd, who was personally a “dry,” knew how to procure a supply of brandy for Winston Churchill’s visit to the Executive Mansion in October 1929. 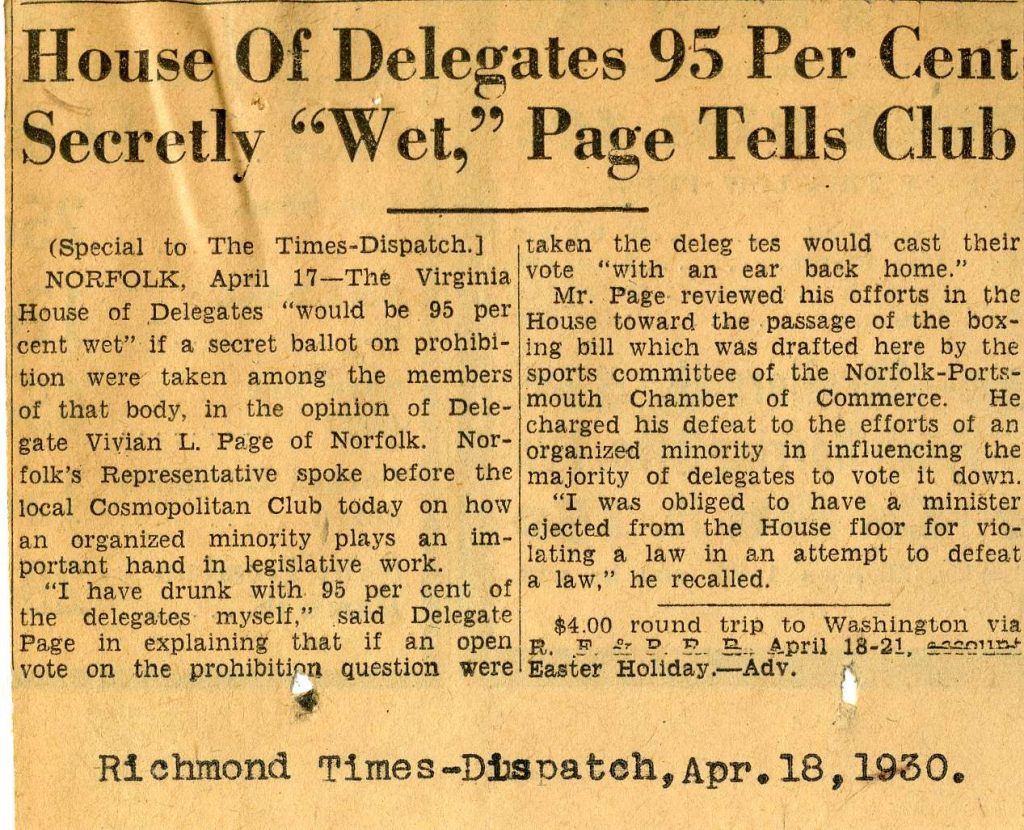 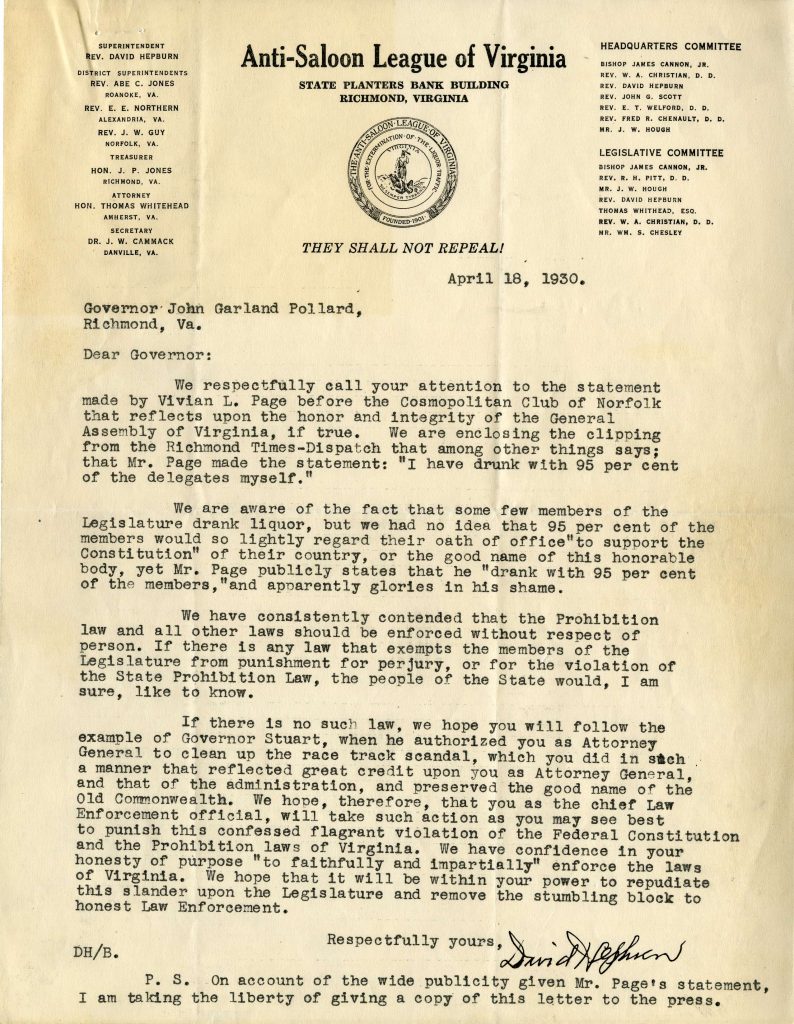 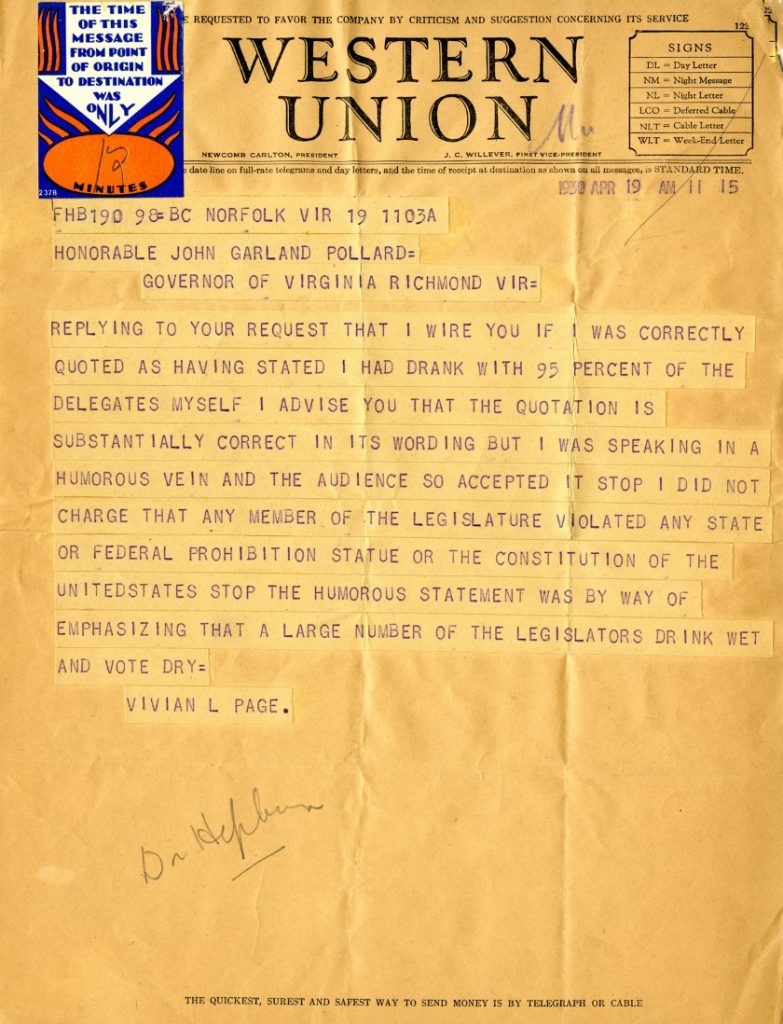 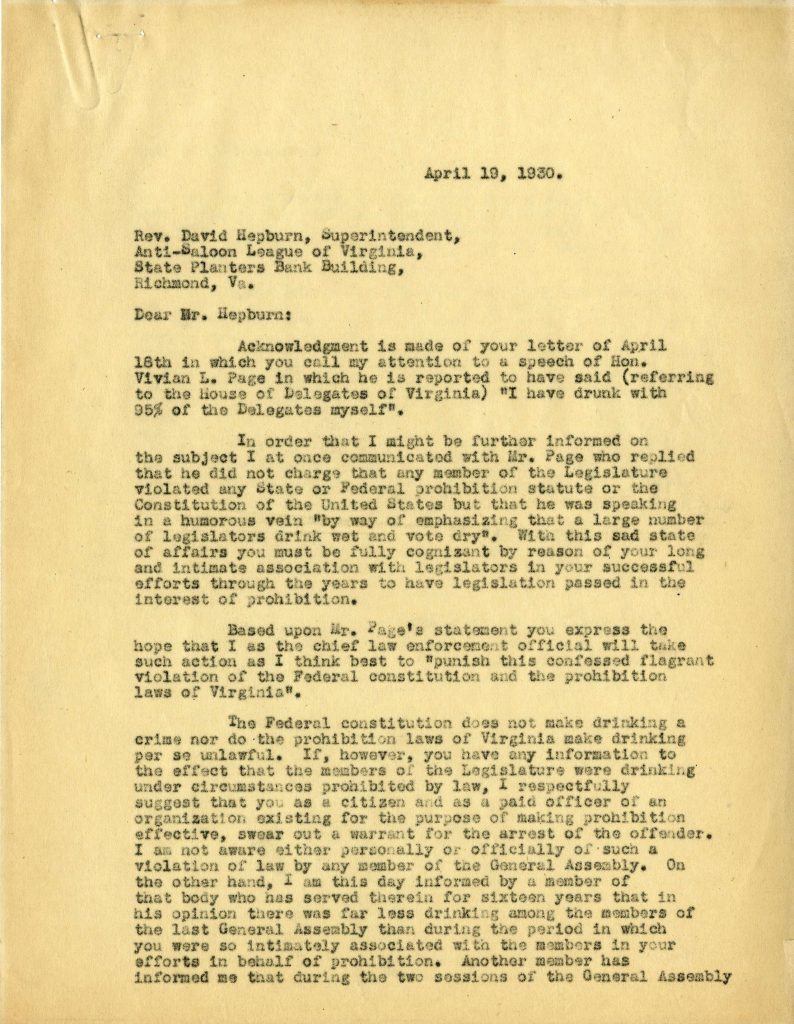 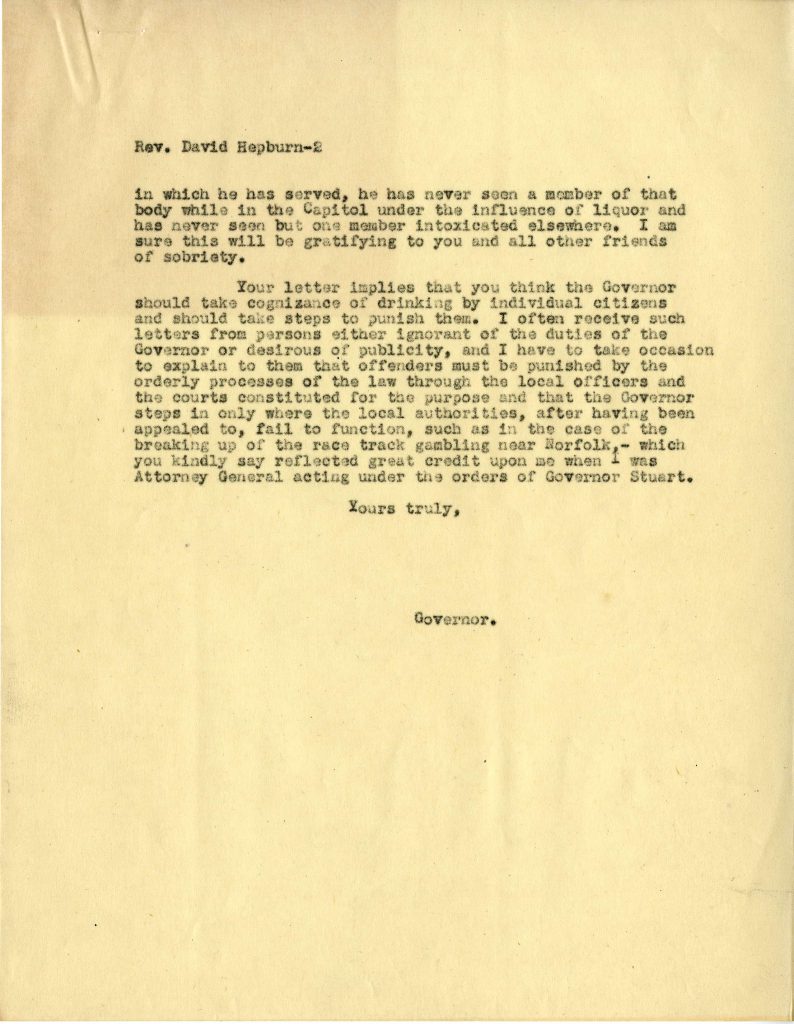 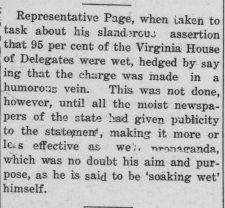 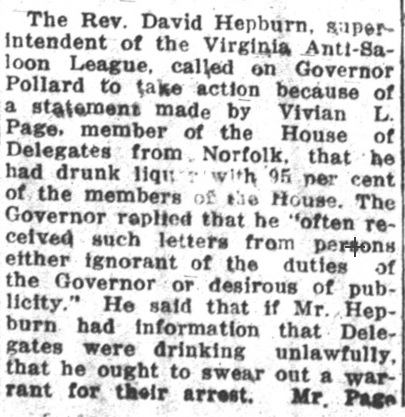 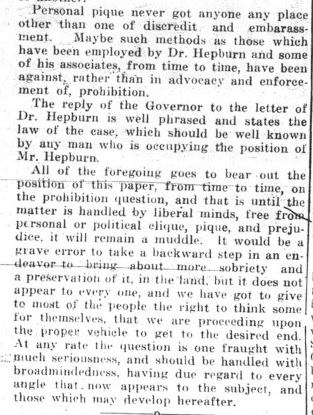 This disparity was publicly called out in April 1930, when Vivian L. Page, a member of the House of Delegates from Norfolk, claimed that the House of Delegates would be overwhelmingly wet if a secret ballot were taken, and that he had personally “drunk with 95 per cent of the delegates.” The statement was reported in the Richmond Times-Dispatch the next day and caused something of an uproar. Reverend David Hepburn, the superintendent of the Anti-Saloon League of Virginia, wrote an angry letter to Governor John Garland Pollard, complaining both about the flagrant violations of the Prohibition Law by delegates and about Page appearing to “[glory] in his shame” by announcing it. Hepburn called for Pollard to “repudiate this slander upon the Legislature and remove the stumbling block to honest Law Enforcement.”

Pollard duly wrote to Page asking if he had been misquoted. Page sent a telegram in returning admitting to the statement but claiming he had been “speaking in a humorous vein and the audience so accepted it.” However, Pollard also pointed out that while he was not accusing anyone of breaking the law, he was only emphasizing the disparity of the fact that “a large number of the legislators drink wet and vote dry.” He did not retract his statement. Pollard, in turn, reminded Hepburn that “the Federal constitution does not make drinking a crime nor do the prohibition laws of Virginia make drinking per se unlawful.” He also noted that if Hepburn knew of any illegal activity by a member of the Legislature, he ought to himself “swear out a warrant for the arrest of the offender,” since the governor should only step in where local authorities fail to function.

Because Hepburn had helpfully provided the press with a copy of his letter, news of the incident soon spread throughout the state. The Highland Reporter in Monterrey noted that Page’s statement had been publicized by “all the moist newspapers of the state” as “wet propaganda,” claiming that this had likely been Page’s aim all along. The Smithfield Times, on the other hand, accused both Page and Hepburn of “bad taste;” they also condemned Hepburn for being motivated by “personal pique” rather than a respect for the law.

Vivian L. Page continued to serve in the House of Delegates until 1936, and then served in the Senate from 1936 to 1944. As Prohibition came to an end, Page was an advocate for privatizing and regulating liquor stores, as opposed to instituting a series of state-owned stores. He lost that fight, and the General Assembly created the Alcoholic Beverage Control in 1934. Page died in Norfolk in 1962.