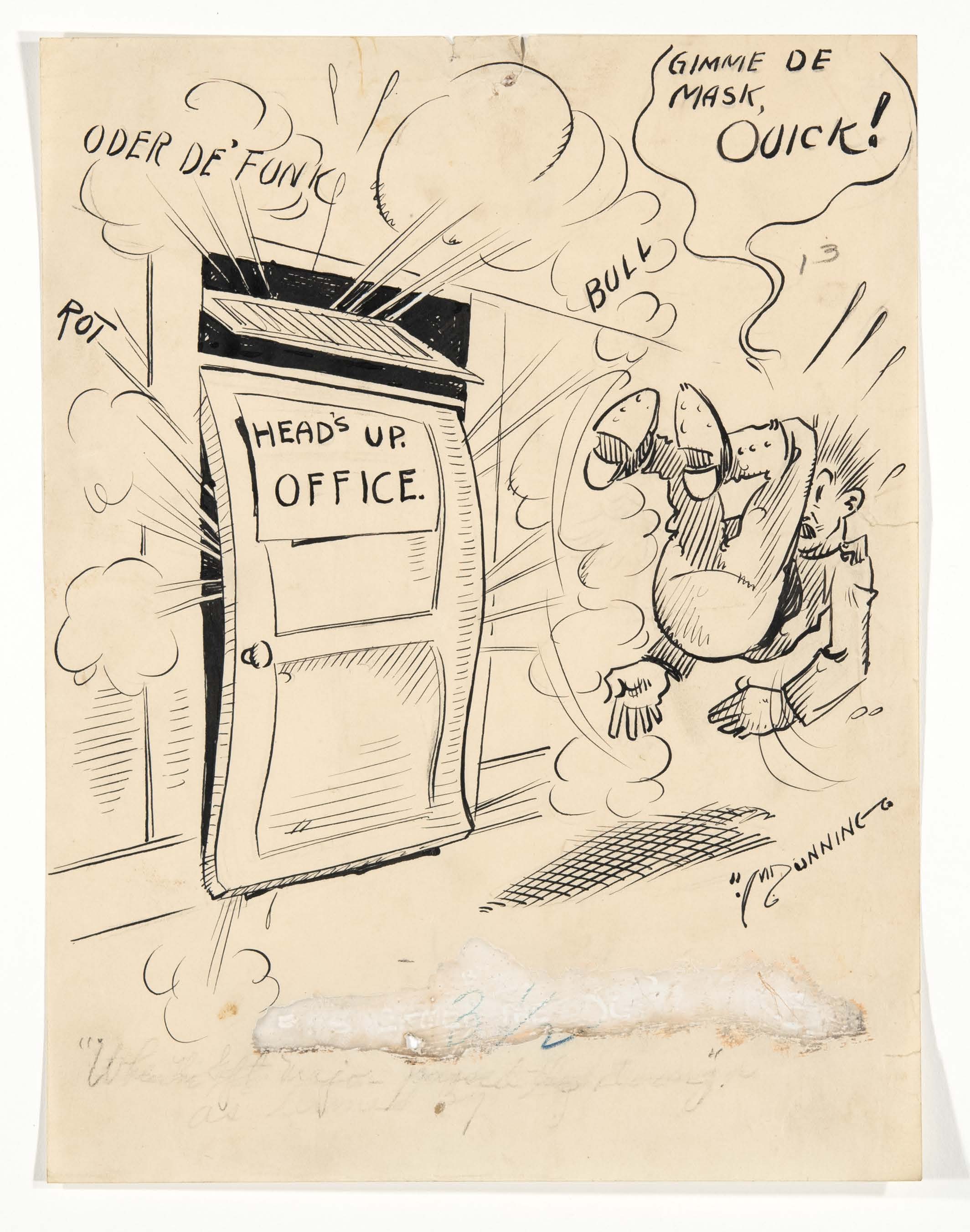 Looney Tunes: the World War I Cartoons of M.A. Dunning

This is the latest entry in a series of blog posts spotlighting stories and records of Virginia’s involvement in World War I. The M.A. Dunning cartoons are part of the World at War: Library of Virginia WWI Collections.

”Heads Up takes pleasure in presenting to its readers the maiden effort at this post of Private Dunning. He has considerable previous experience in this line in both civilian and army life. His work will appear regularly each day.

During World War I, military camps, regiments, ships, and military hospitals often printed their own newspapers for military personnel stationed there, keeping them informed on both internal and external news. Heads Up (film 1670) served as the newspaper for Debarkation Hospital 52located on the Richmond College (now University of Richmond) campus in Richmond, Virginia, and provided news about the hospital, the Richmond area, and the end of the war.  One of the regular features of Heads Up was the cartoons of M. A. Dunning. Twenty-three of Dunning’s original drawings are located in the Margaret Ethel Kelley Kern papers (LVA acc. 23481). 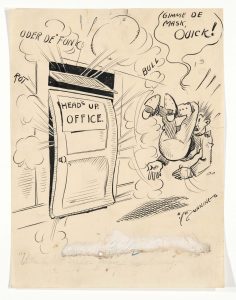 By the time his work began appearing in Heads Up, M. A. (Marshall Alston) Dunning already had a successful career in cartooning. Born 28 July 1894 in Crystal Springs, Mississippi, Dunning relocated with his family to San Antonio, Texas, by the time he was 12 years old. At that age, his drawing of William Howard Taft appeared in the San Antonio Express, beginning Dunning’s career as a cartoonist. By the time World War I began, Dunning had moved to Cleveland, Ohio, and worked for the Landon School of Cartooning. He enlisted 7 September 1918, serving first with the 158th Depot, then with the Medical Department. His last stop in the department was at Debarkation Hospital no. 52. Dunning’s cartoons began appearing in the hospital newspaper Heads Up on 4 January 1919 and ran until the paper ended 7 April 1919. The cartoons often reflected the personalities and events at the hospital, as well as the more universal life of the soldier in uniform. 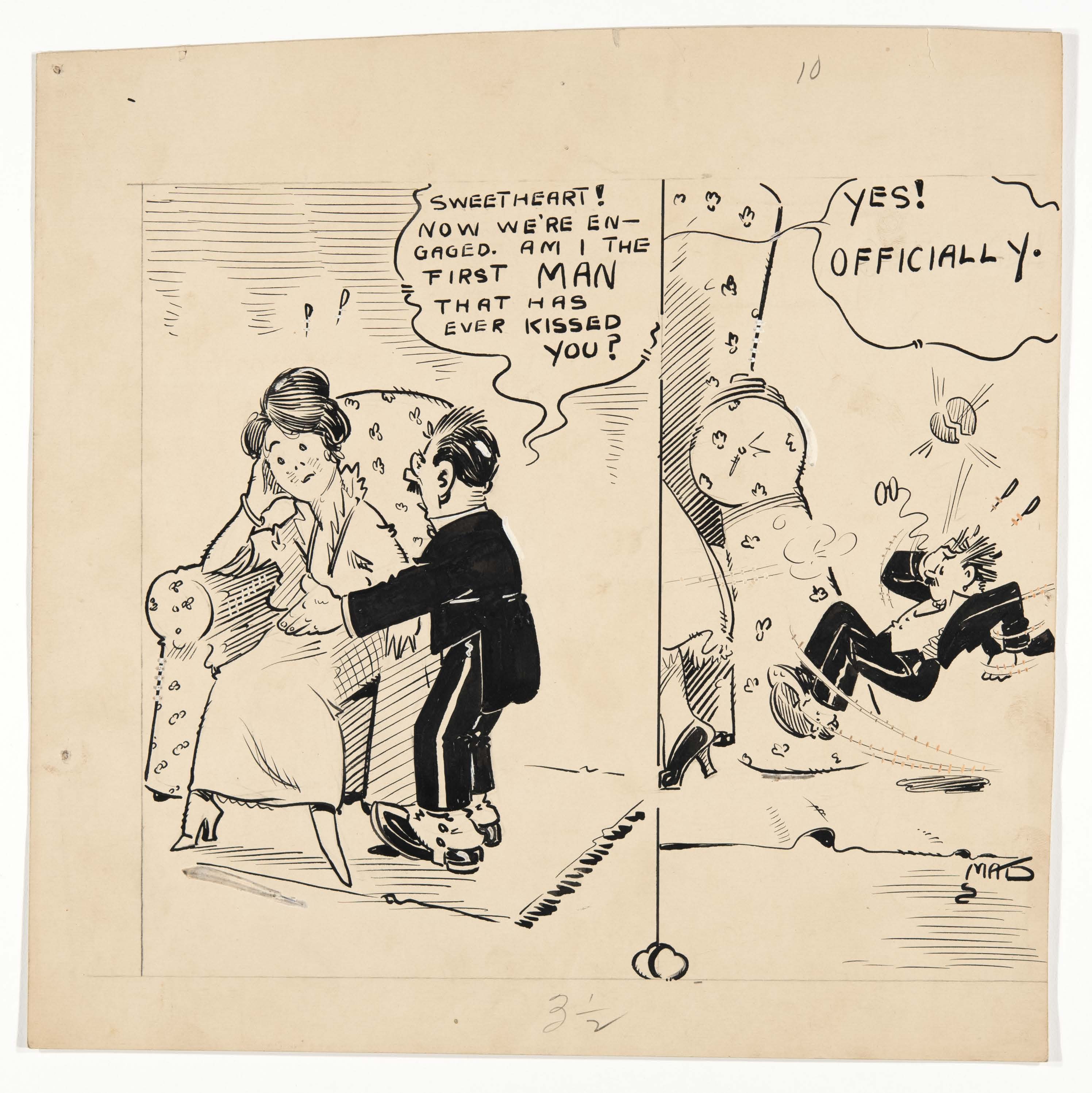 After being honorably discharged from the army on 21 July 1919, Dunning returned to Cleveland, graduating from the Cleveland School of Art (now Cleveland Institute of Art) in 1921. Over the next 28 years, his career spanned the continent, as he worked for the Akron Times and Cleveland Press in Ohio, and the Miami News and JacksonvilleJournal in Florida. Dunning travelled west to California, where he worked for the San Diego Tribune, as well as for the Walt Disney Company and Columbia Pictures as an animator. He relocated to Texas in 1938 as cartoonist for the Austin American-Statesman before returning to Florida in 1943. Dunning died of a heart attack in Jacksonville on 29 June 1949.

Debarkation Hospital 52 originated as General Hospital 22 which was established when the staff and equipment of General Hospital 13 were transferred to the Richmond College campus from Dansville, New York. Originally consisting of 500 beds, the hospital was later expanded to 1,000 beds. On 8 December 1918, the facility was re-designated as Debarkation Hospital 52 serving patients returning from overseas. The campus was formally evacuated on 31 May 1919, and returned to the custody of the Trustees of Richmond College. During the time that the hospital was at its new campus, Richmond College had returned to its old location on Grace Street between Ryland and Lombardy streets.

Twenty-three of Dunning’s cartoons can be viewed on the Library’s  Pinterest page. A small number of issues of Heads Up are available online courtesy of the U.S. National Library of Medicine, National Institutes of Health.