College students have never been known for their avoidance of alcohol, and it was no different in the 1930s, despite the fact that alcohol was illegal nationwide. In 1930, Virginia Attorney General John R. Saunders attempted to crack down on violations of prohibition laws at the University of Virginia, especially at football games. Before the Thanksgiving Day game between UVA and UNC, one of the oldest rivalry games in the country, Saunders announced his intention to have seven prohibition inspectors patrolling the stadium in Charlottesville. 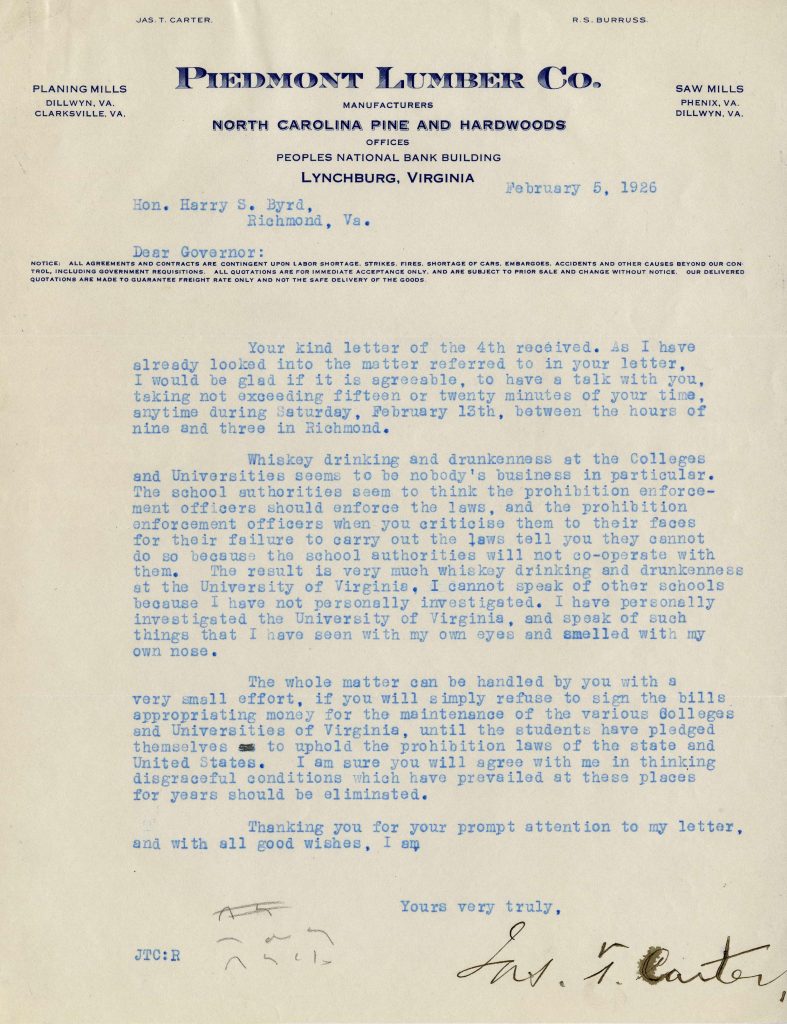 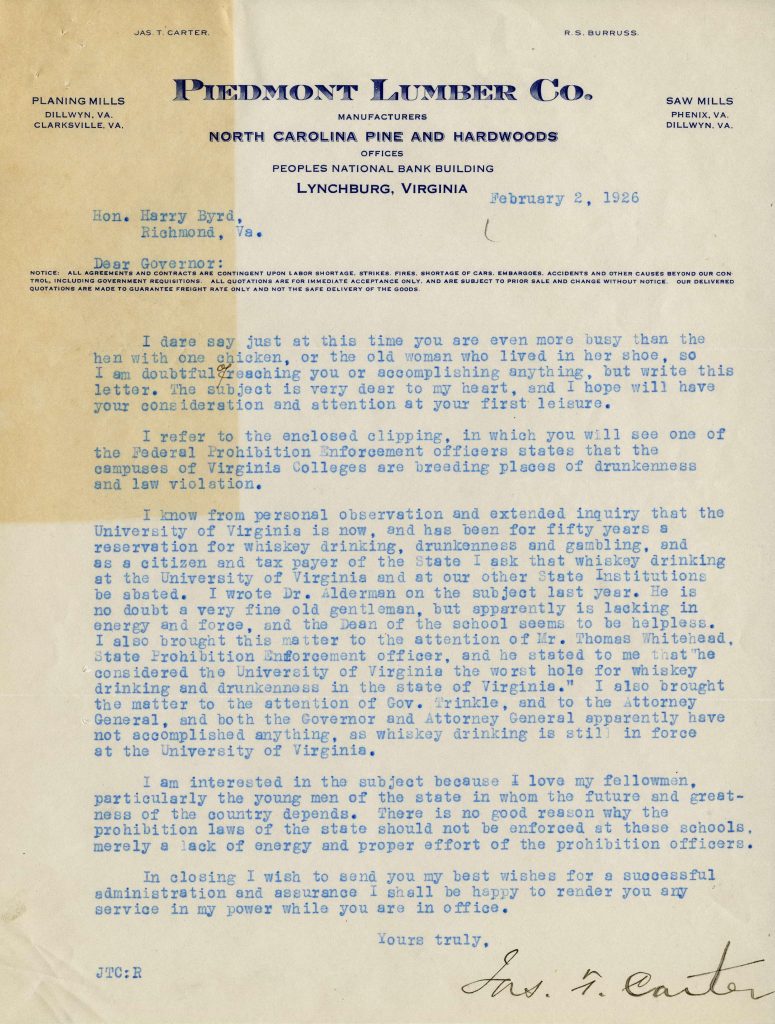 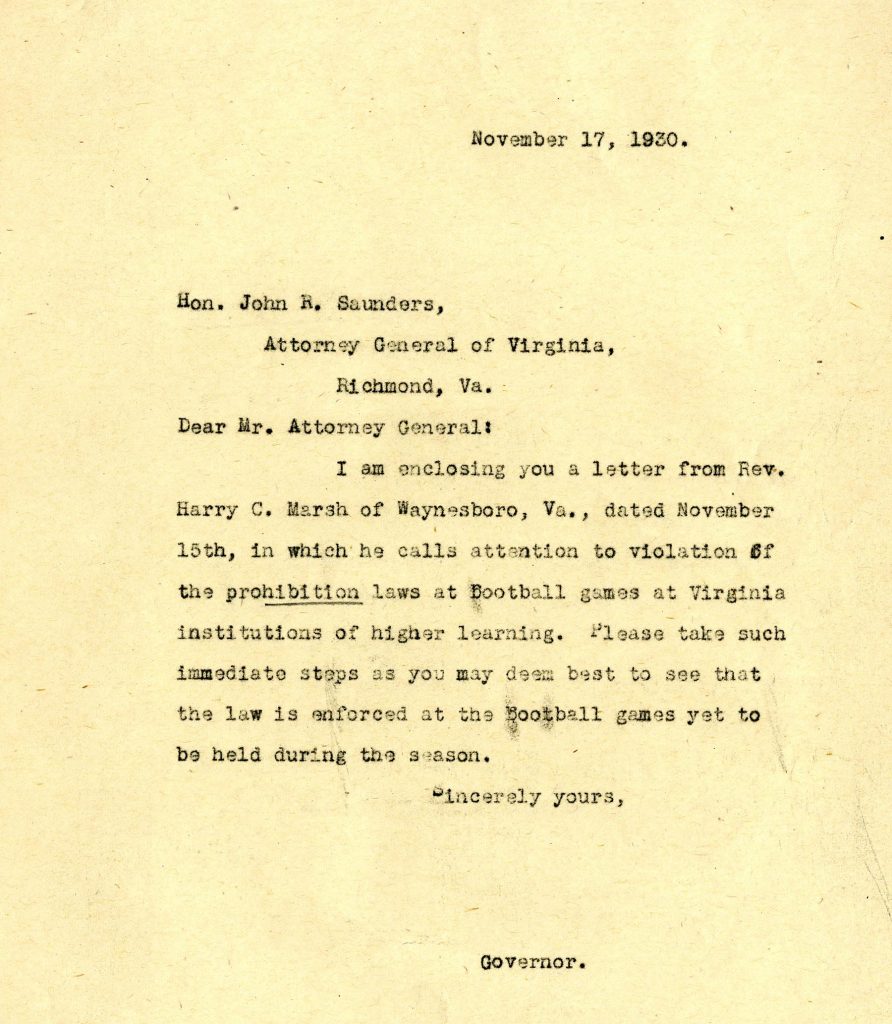 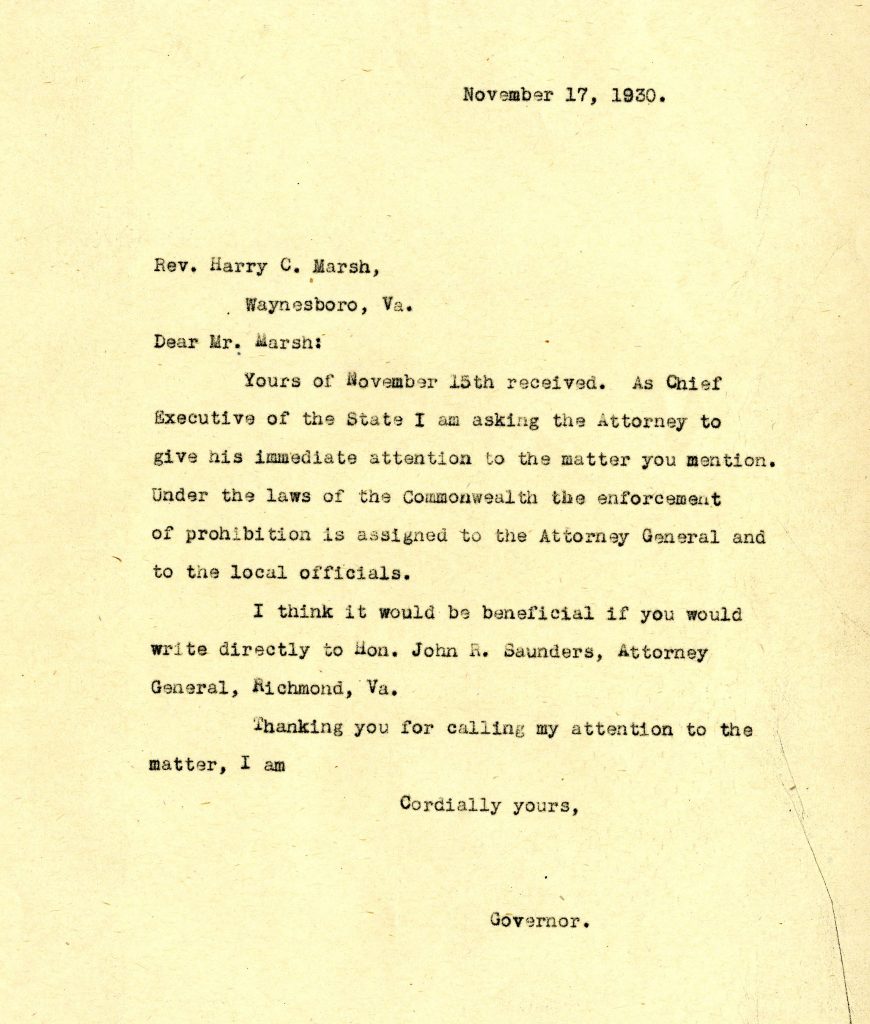 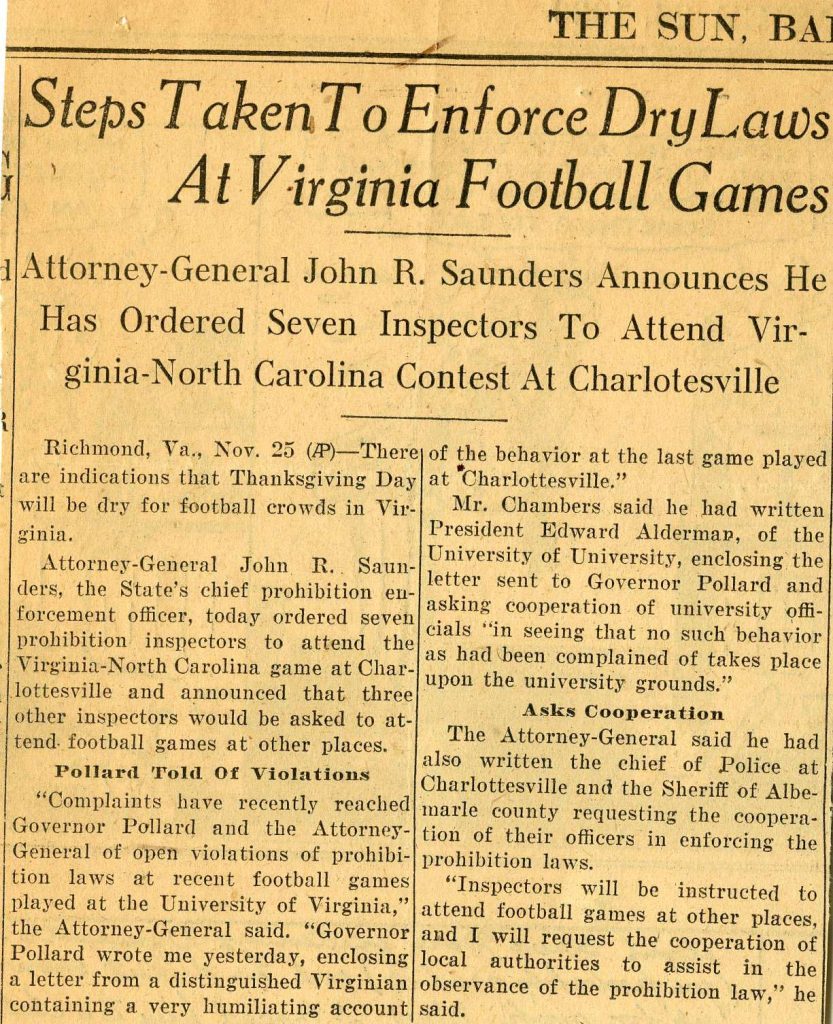 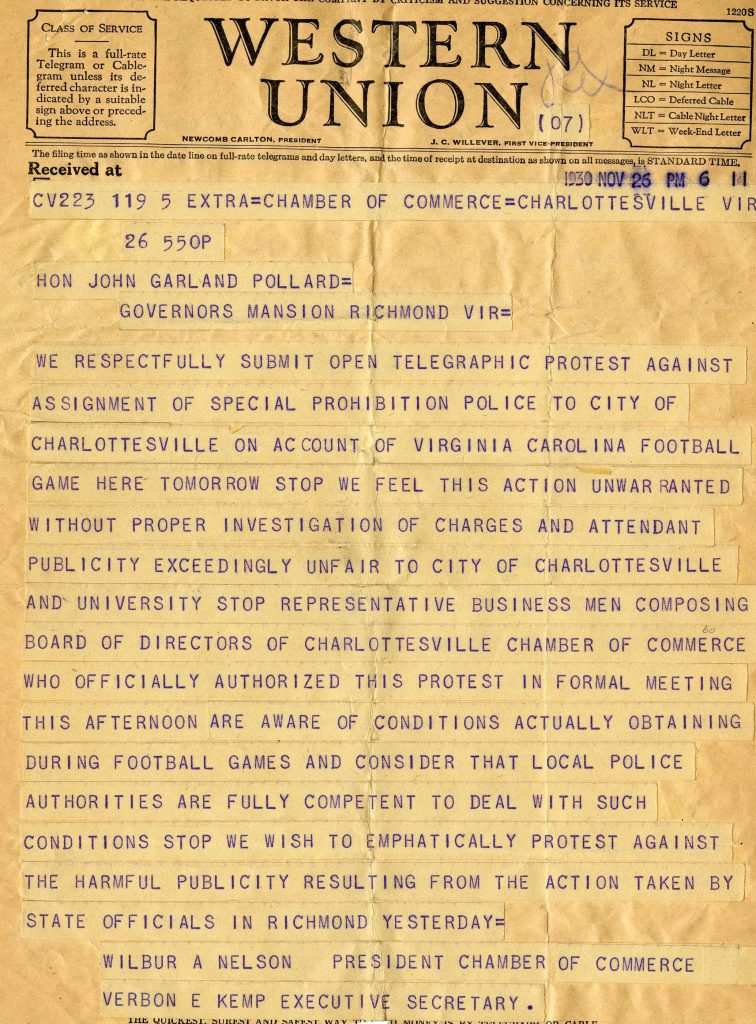 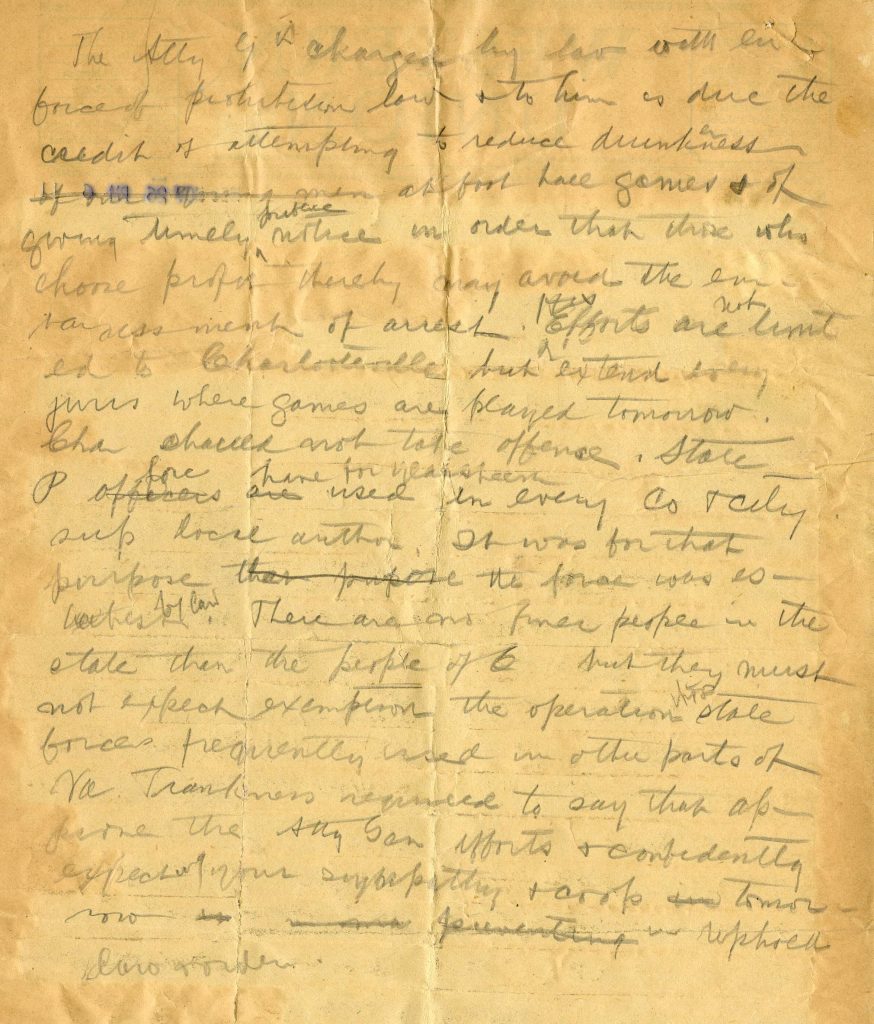 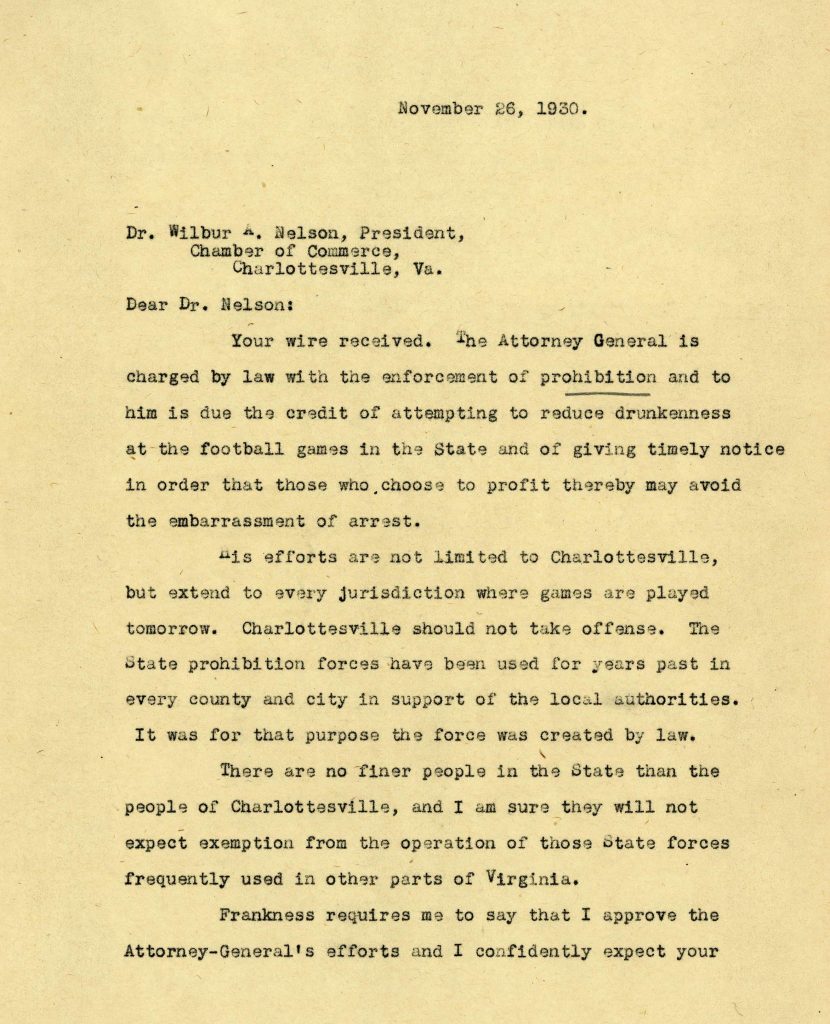 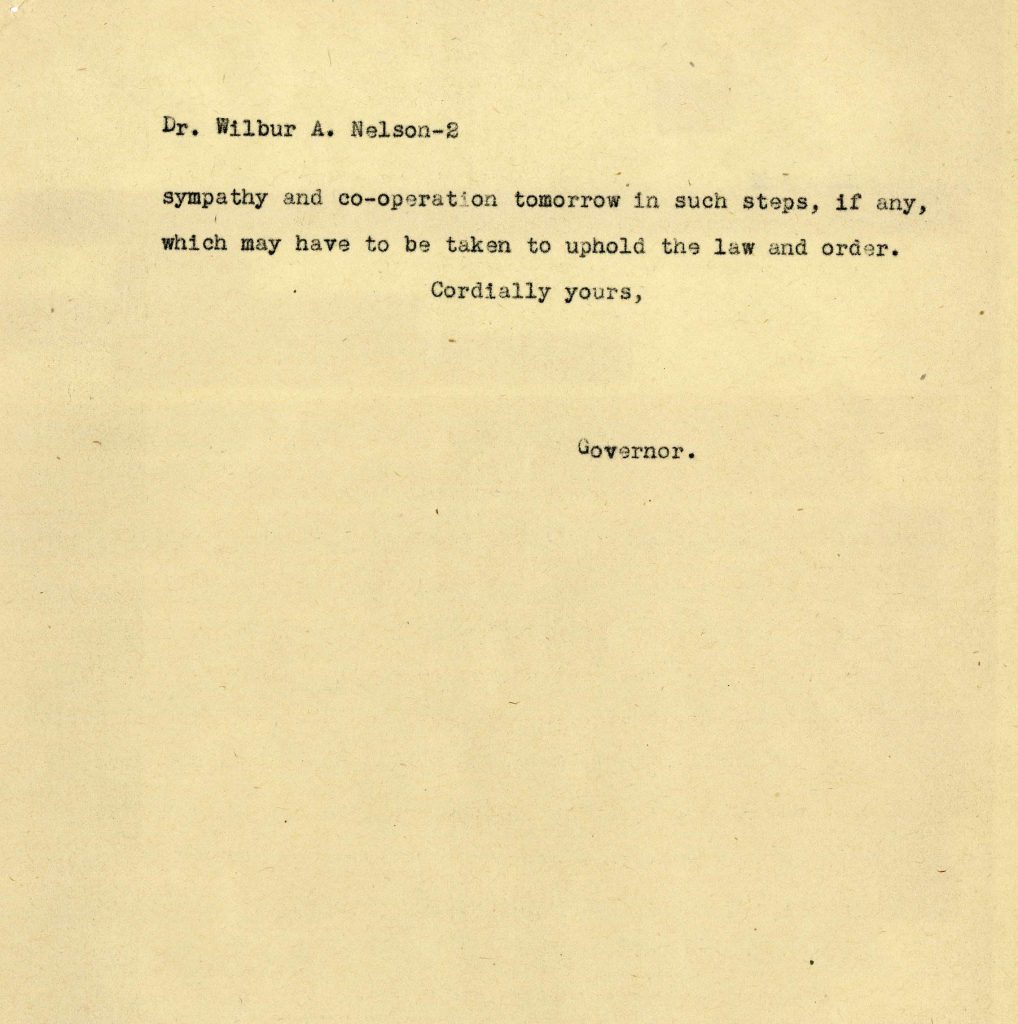 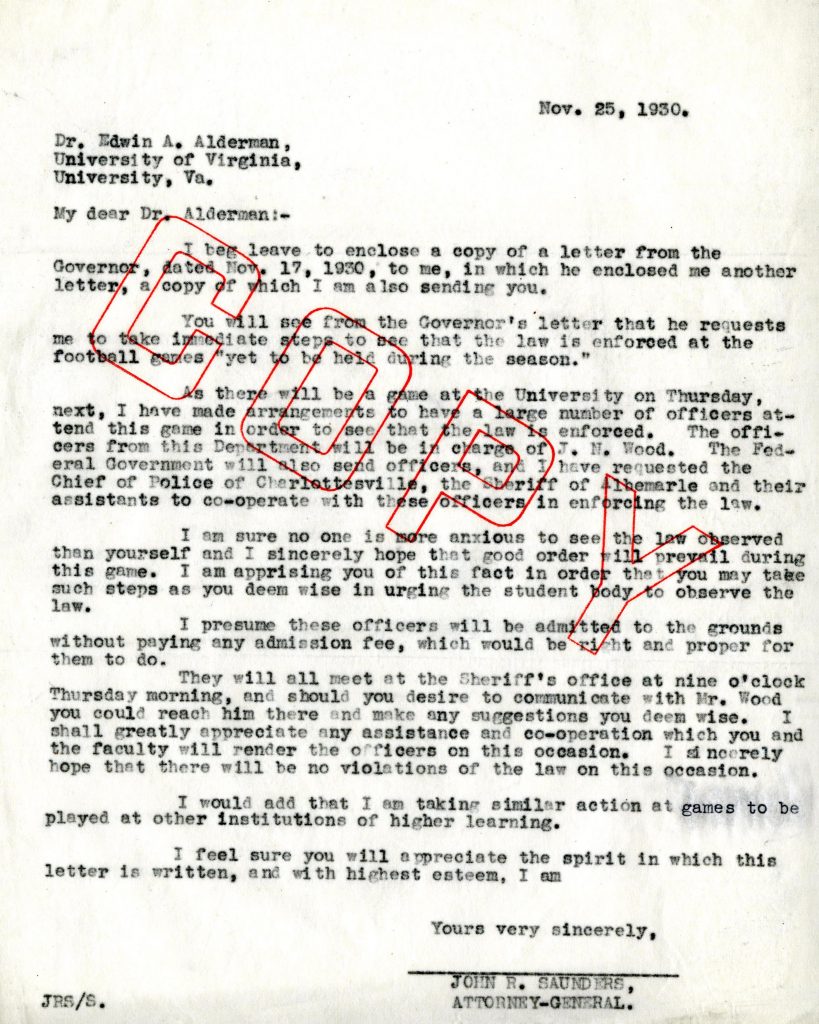 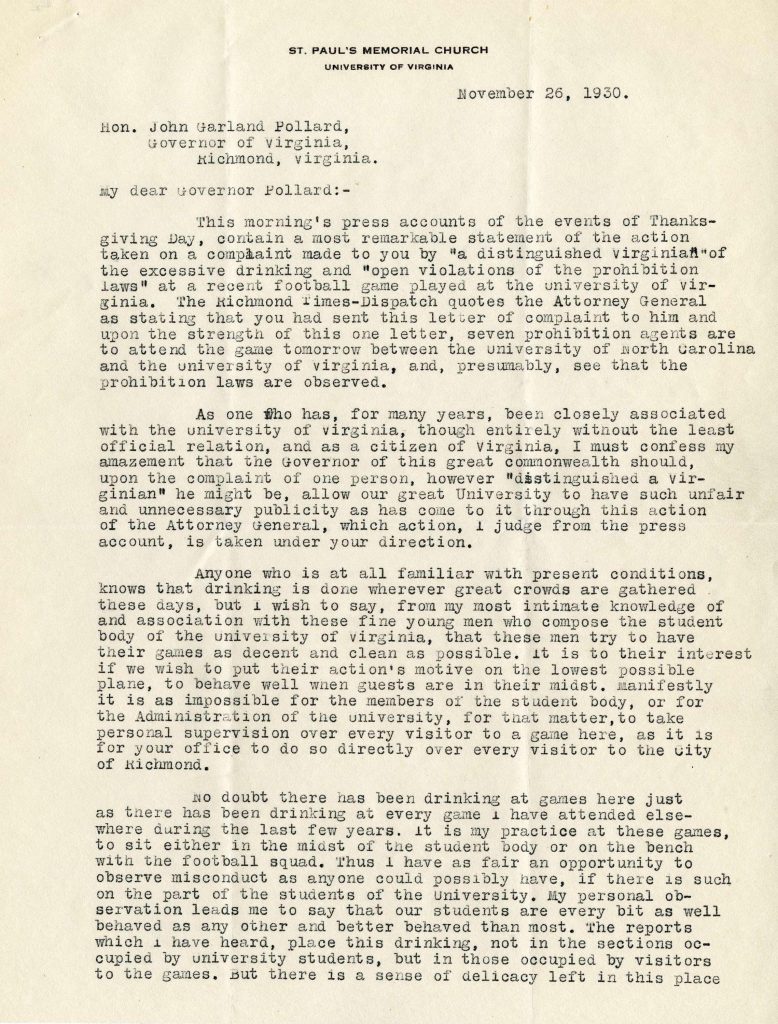 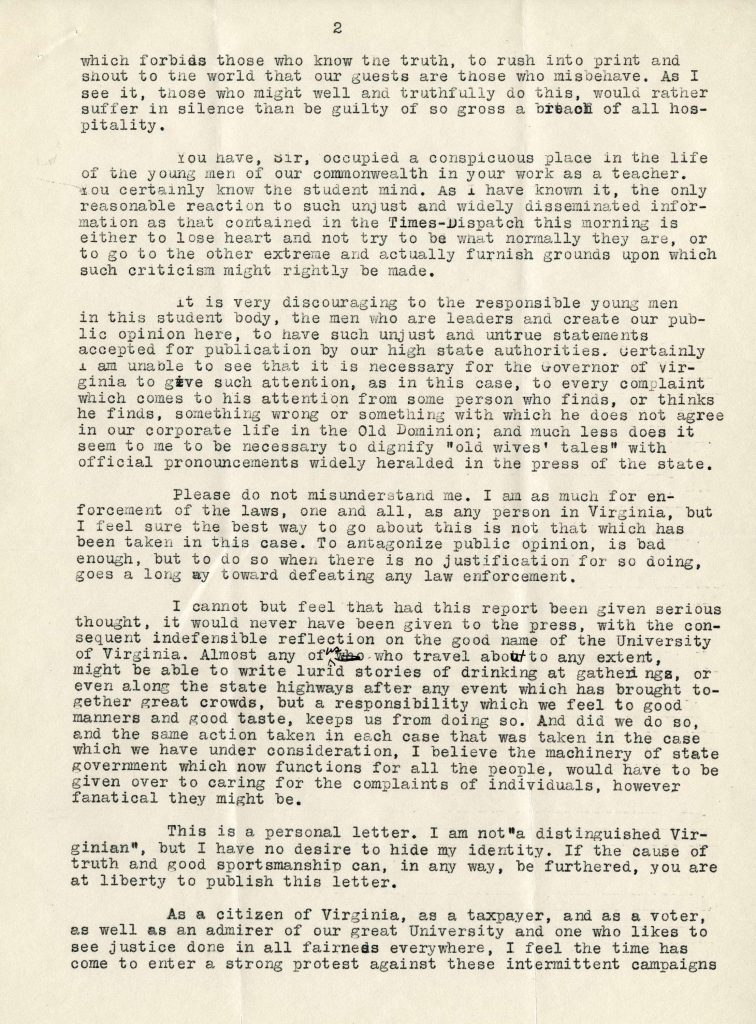 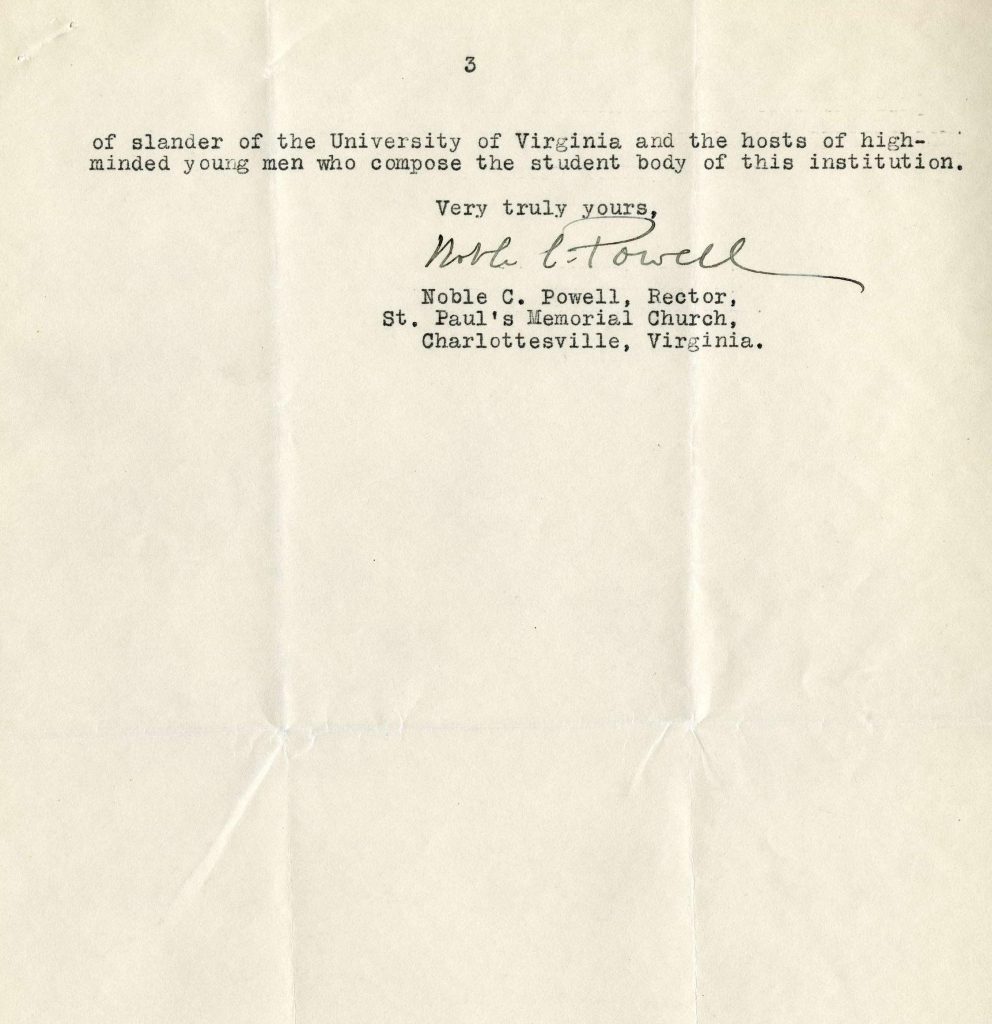 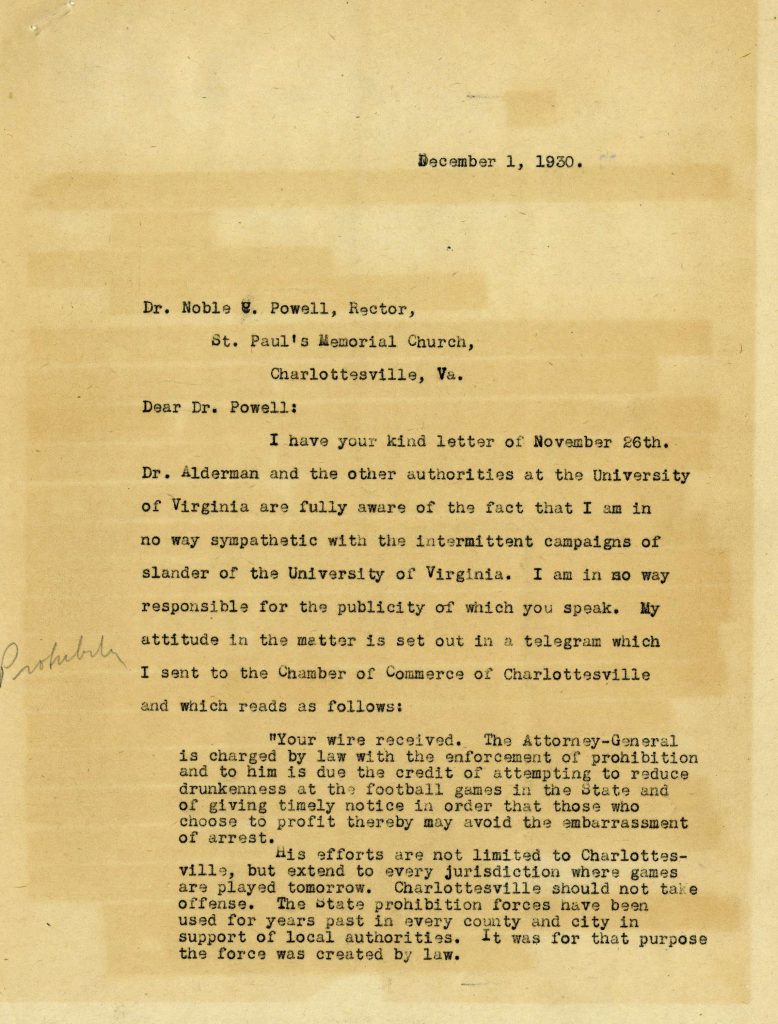 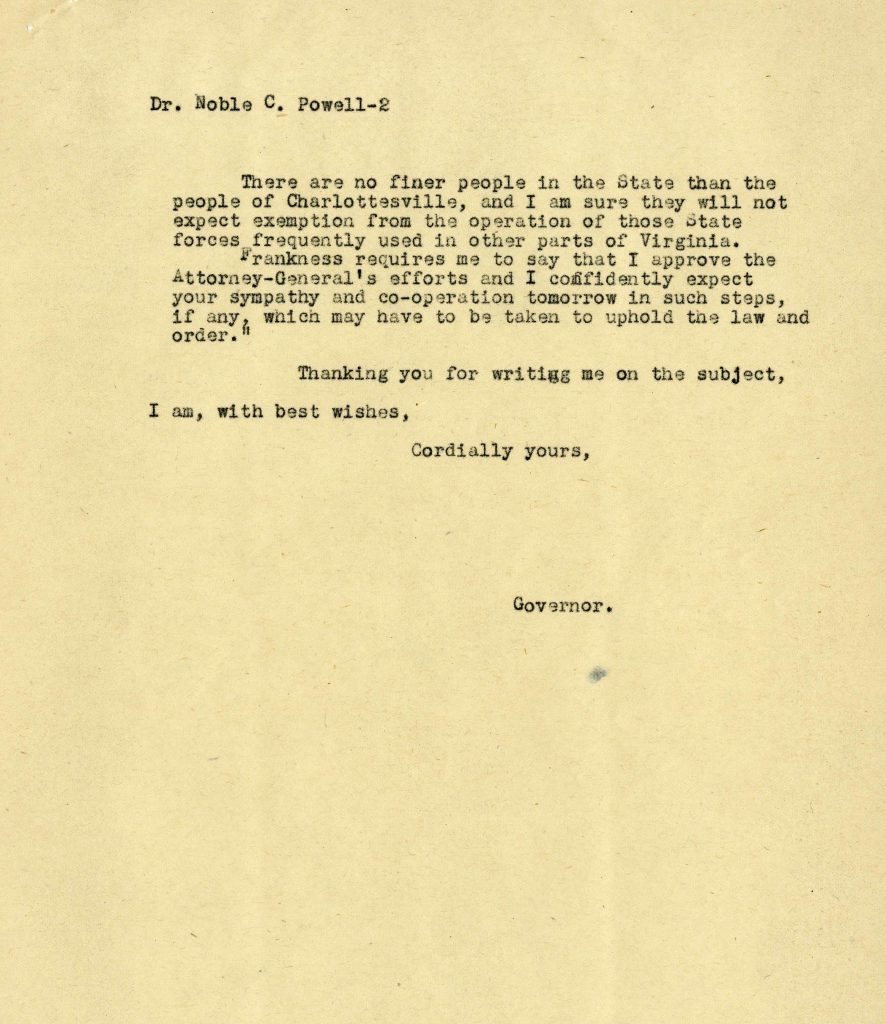 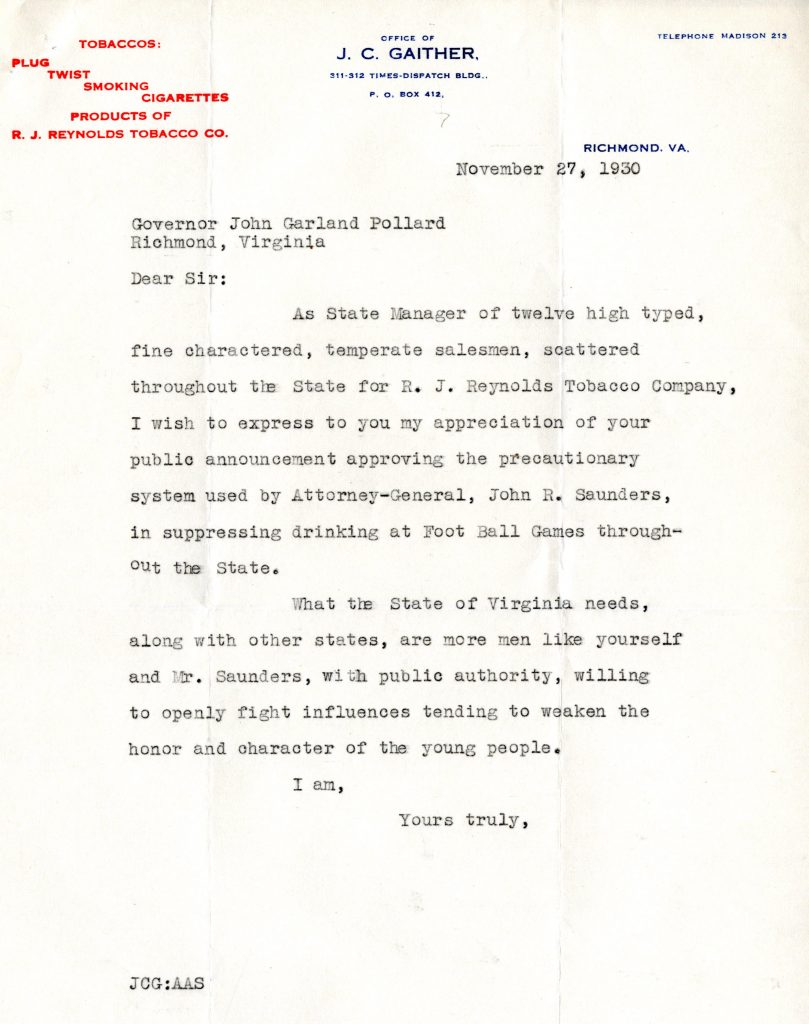 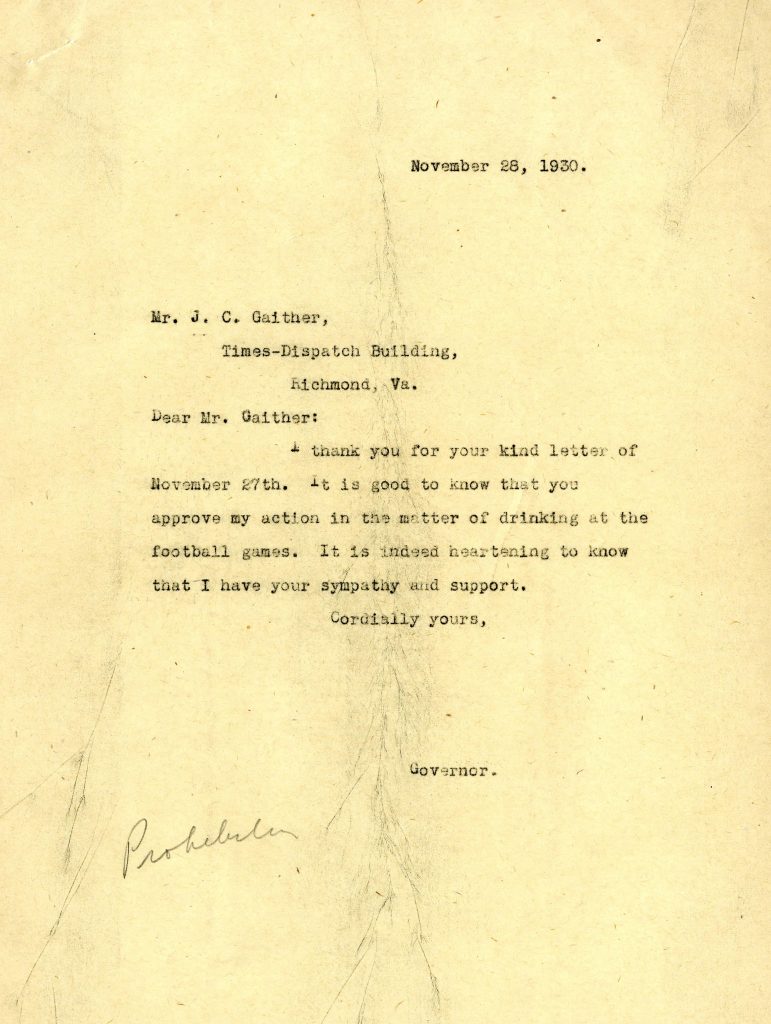 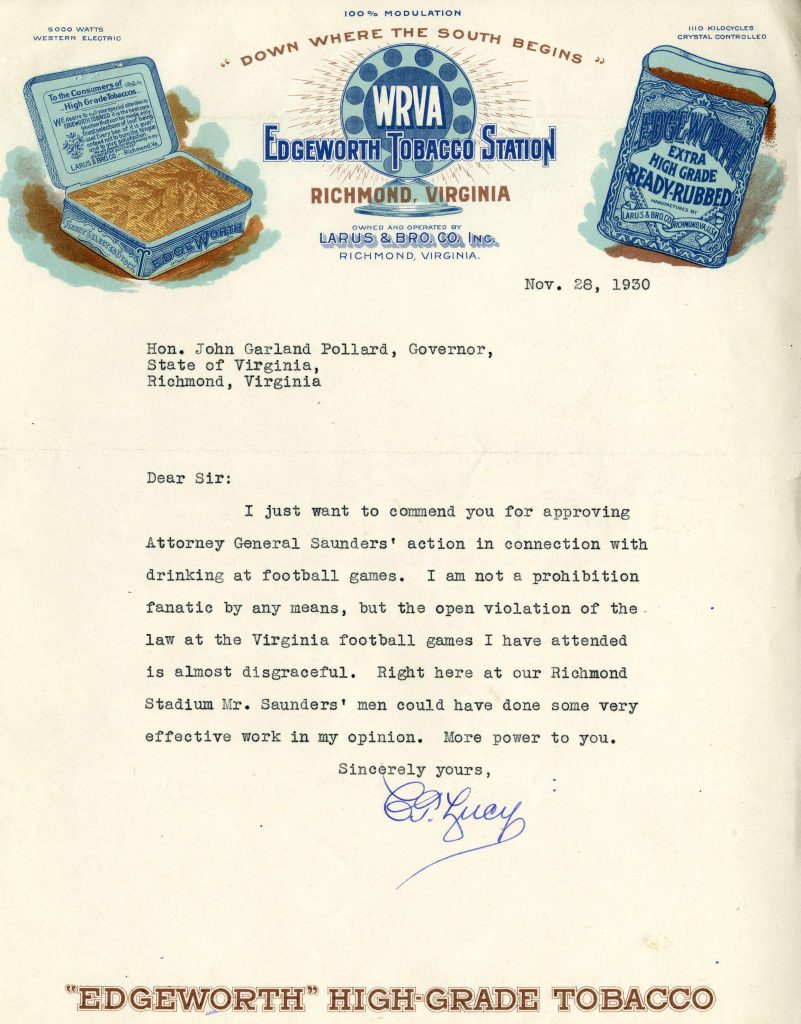 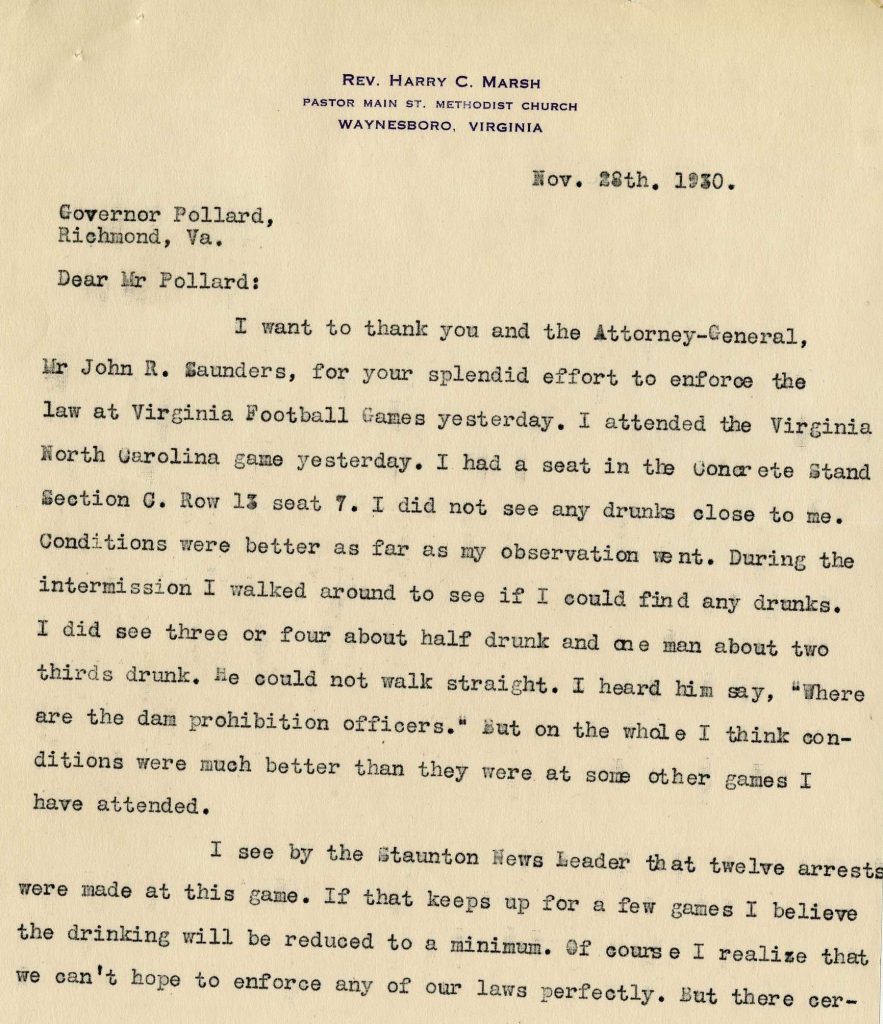 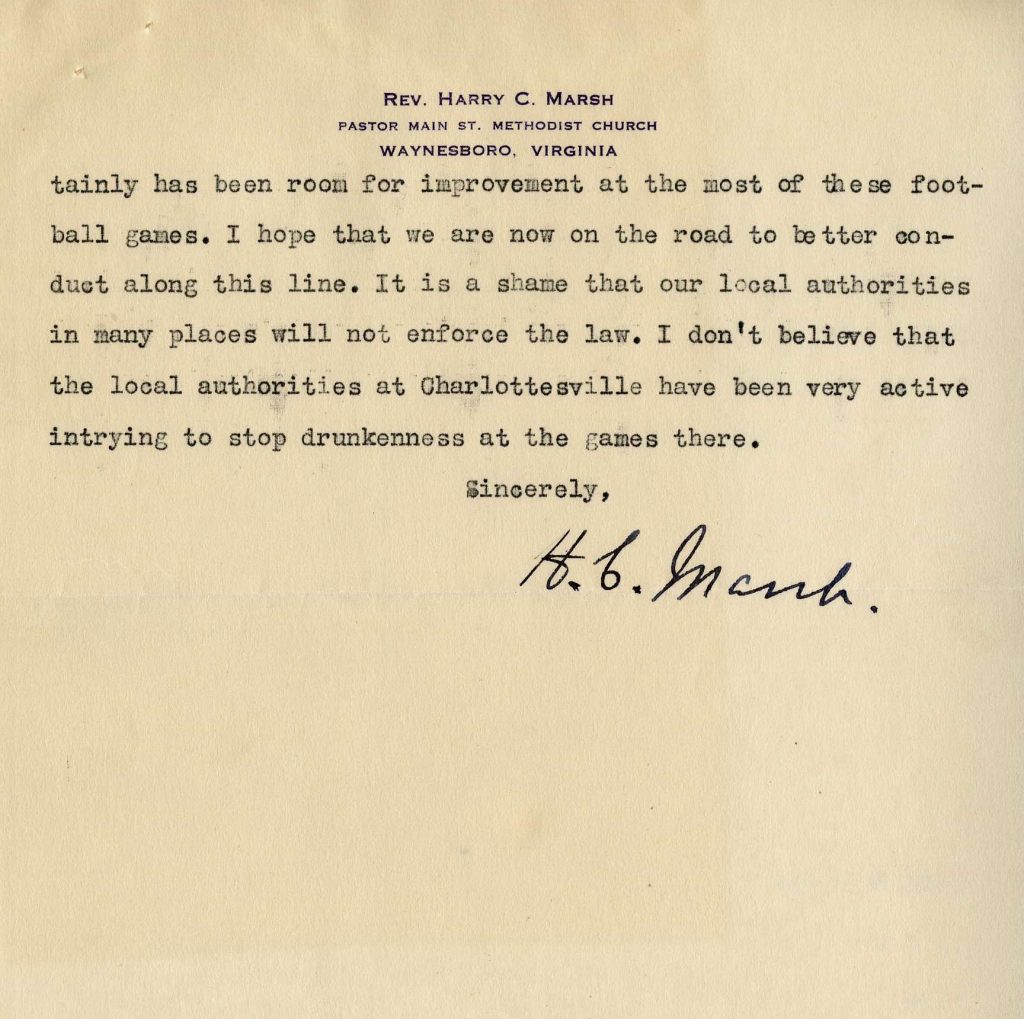 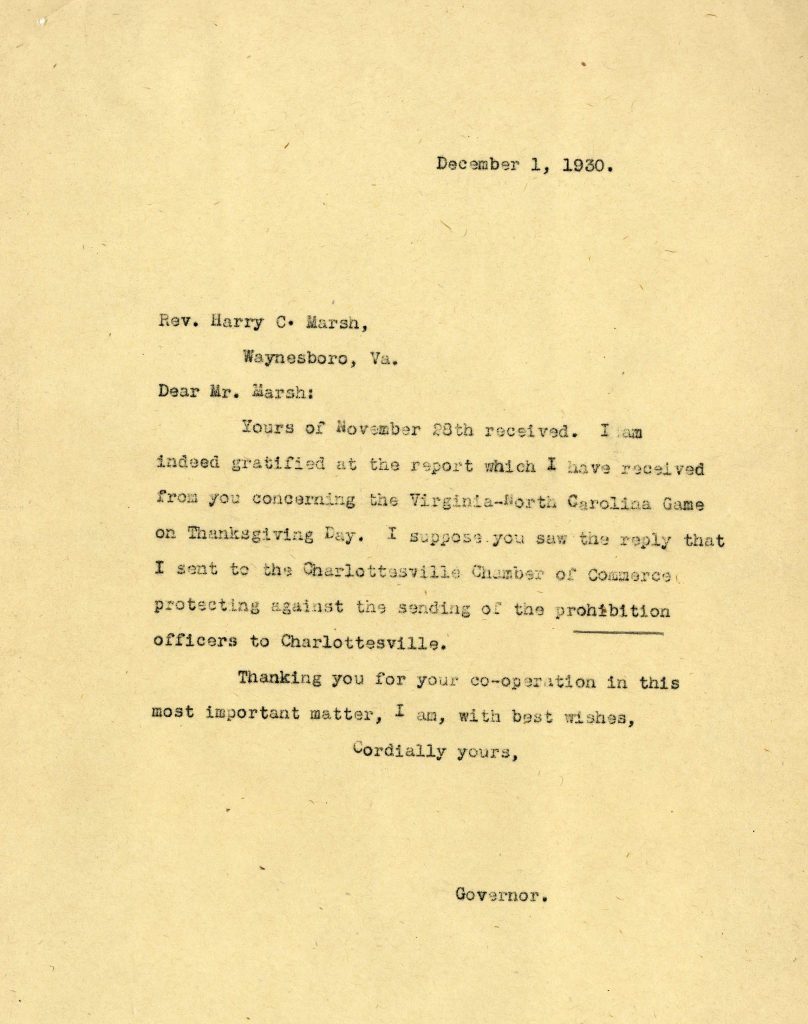 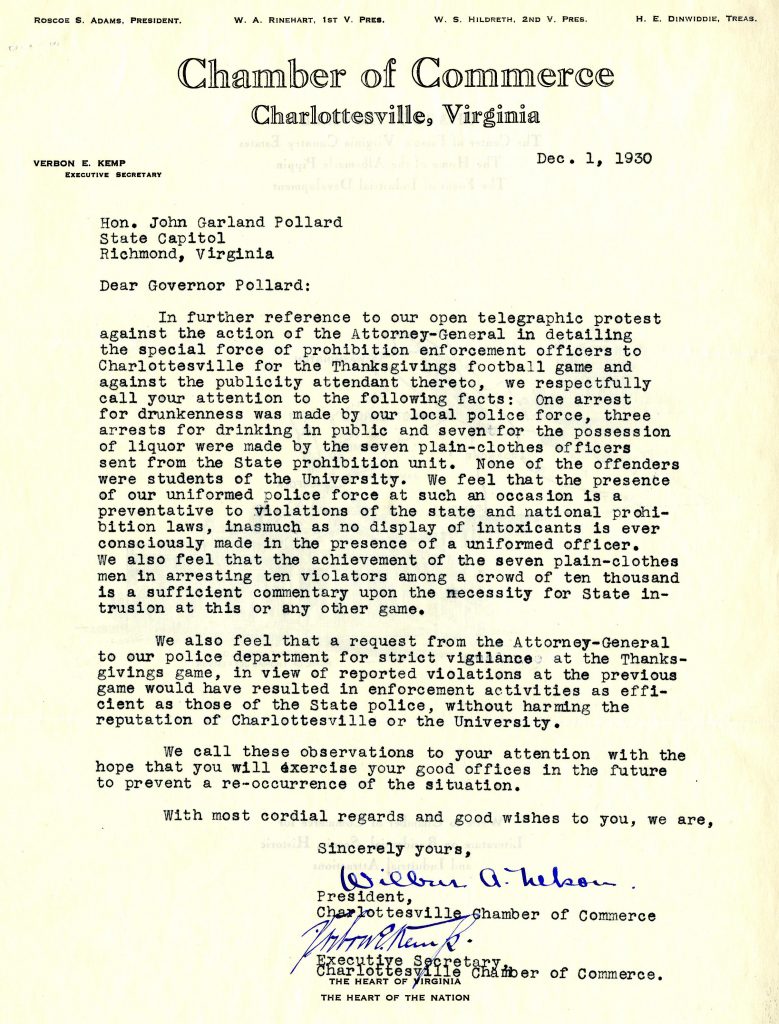 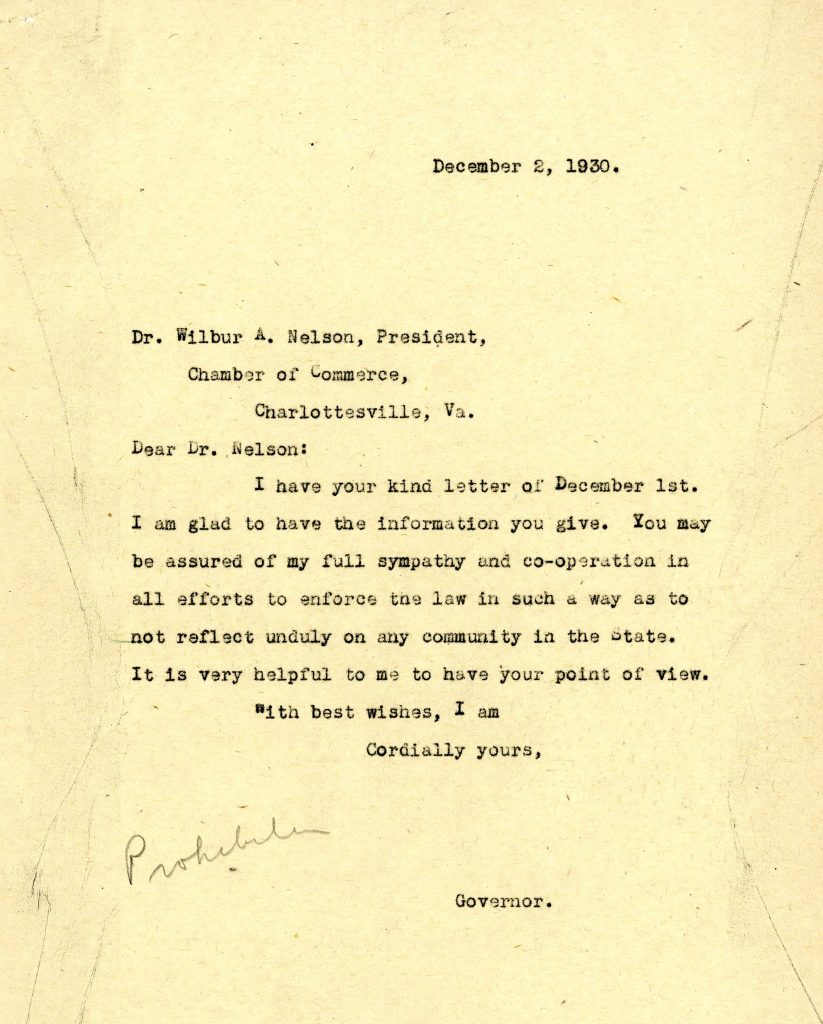 Some members of the community protested vigorously, concerned that the action would damage the reputation of the city and the university. Members of the Charlottesville Chamber of Commerce entered an “open telegraphic protest” against the attorney general’s plan, complaining that the action was unwarranted and that the “attendant publicity [was] exceedingly unfair to [the] city of Charlottesville and university.” Noble Powell, the rector of St. Paul’s Memorial Church in Williamsburg, told Governor John Garland Pollard that although he didn’t doubt that there was some drinking at the football games at UVA, he felt “our students are every bit as well behaved as any other and better behaved than most.” In Powell’s view, for the attorney general to single out the University of Virginia, where “these men try to have their games as decent and clean as possible,” considering that drinking was done “wherever great crowds are gathered these days.” Powell went so far as to condemn the governor’s tacit endorsement of the action, claiming that it was “very discouraging to the responsible young men in this student body, the men who are leaders and create our public opinion here, to have such unjust and untrue statements accepted for publication by our high state authorities.”

However, Saunders’s crackdown also had many supporters. James T. Carter of Piedmont Lumber Company had written twice to Powell’s predecessor Harry Byrd in 1926, calling the University of Virginia “a reservation for whiskey drinking, drunkenness and gambling,” and recommending that Byrd “simply refuse to sign the bills appropriating money for the maintenance of the various Colleges and Universities of Virginia, until the students have pledged themselves to uphold the prohibition law of the state and United States.” C. P. Lucy claimed that he was “not a prohibition fanatic by any means,” but found “the open violation of the law at the Virginia football games…disgraceful.” Reverend Harry Marsh of the Main Street Methodist Church in Waynesboro attended the Virginia-North Carolina game, commented that “on the whole…conditions were much better than they were at some other games.”