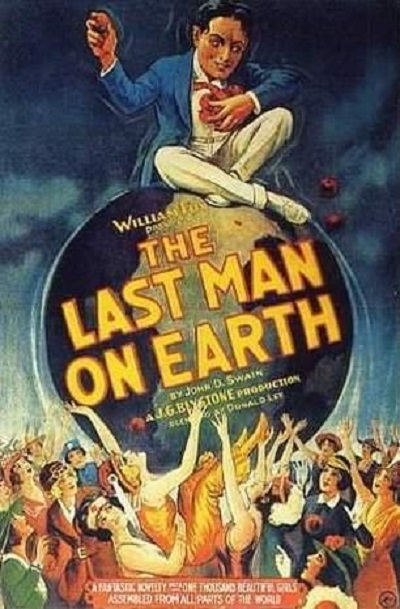 Not If You Were The Last Man On Earth!: Virginia’s Board of Censors

The Virginia Board of Censors (1922–1966), later the Division of Motion Picture Censorship, was tasked with identifying obscene, indecent, and immoral scenes in motion pictures. The purpose of the body was to regulate motion pictures and provide a system of examination, approval, and regulation of banners, posters, and other advertising material related to films. The board also leveled penalties for violation of its requirements. The law establishing the board made it essentially illegal to sell or exhibit any commercial film that had not been officially approved and licensed by the board.

In 1924, a silent film, The Last Man on Earth presented challenges for the Board of Censors in several areas. The movie takes place in the future; a young man believes he has met the love of his life only to be rejected by the young lady.  He is so devastated by her rejection that he moves to the mountains, determined to live his life as a hermit. While he is away from civilization a devastating worldwide plague kills every fertile man on Earth over the age of 14.  The plague called “masculitis” results in an overpopulation of women. The disease manages to become a de factowomen’s rights movement. In the United States, positions in Congress, the courts, and the presidency are all held by females.

A female aviator on a flight across the country notices signs of someone living in the woods and lands her plane to investigate smoke coming from a cabin in the mountains.

The aviator discovers the young hermit, who is the only man left in the world. She convinces him that he is a “national treasure” and must be taken to Washington D.C. When news gets out that there is one man left on earth the women of world descend on the poor fellow. His response to all the aggressive attention is to state he only wants the woman who rejected him. 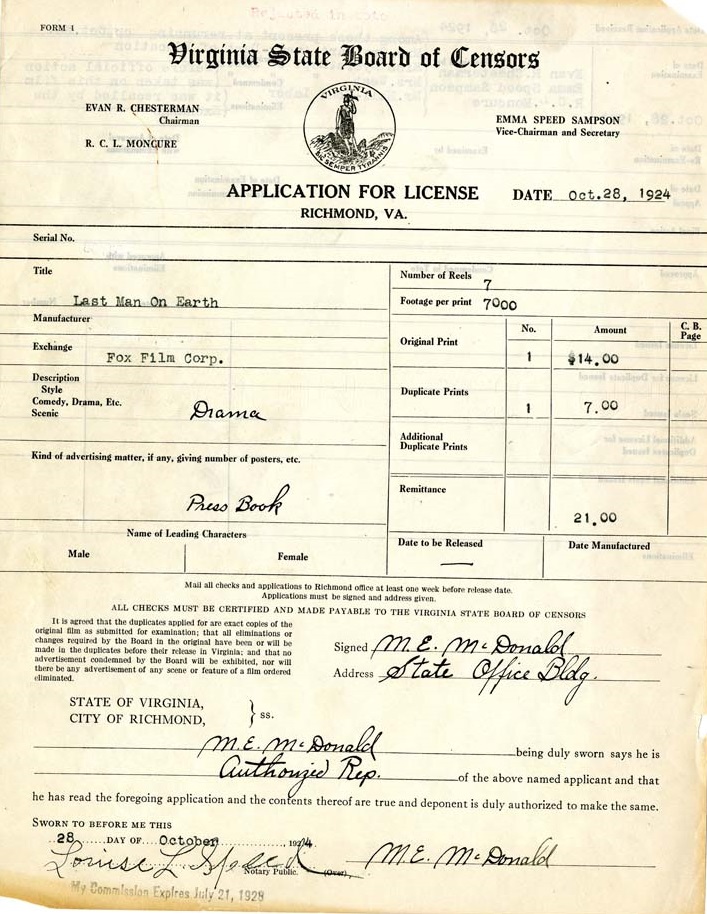 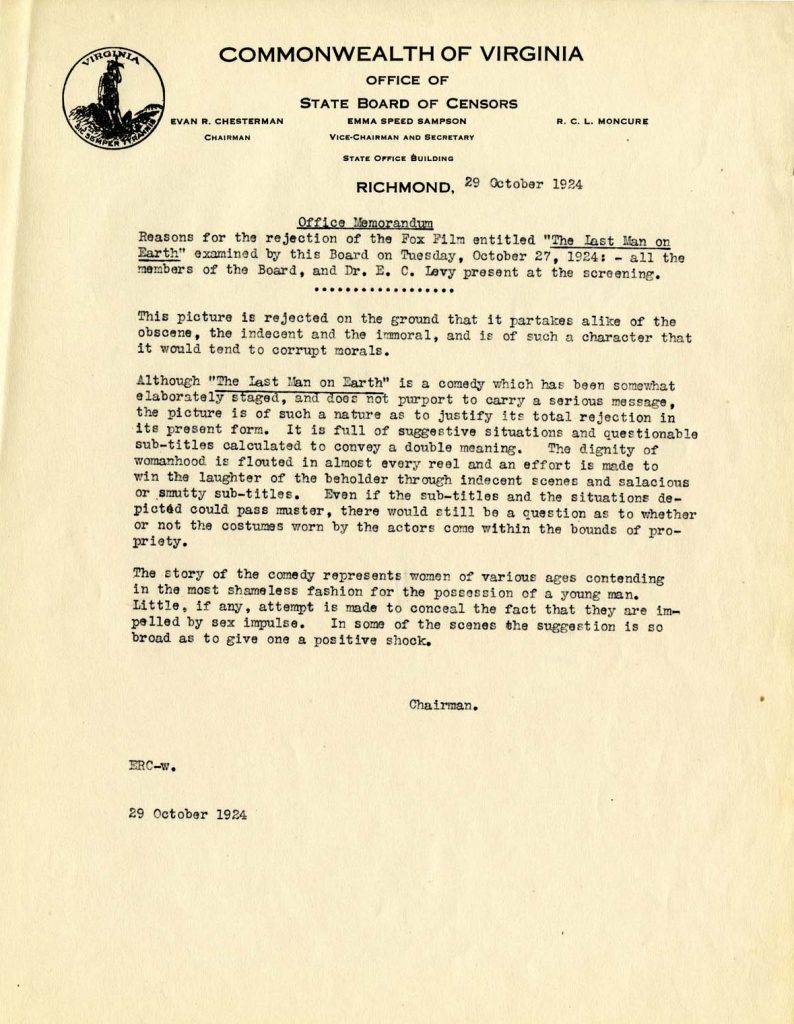 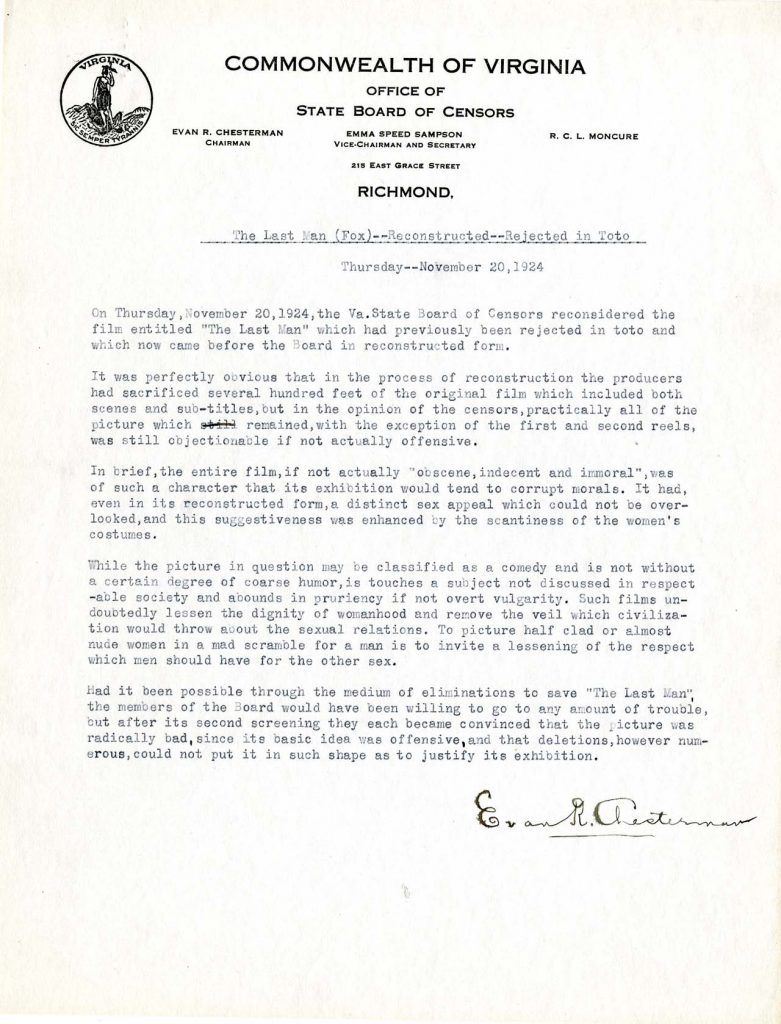 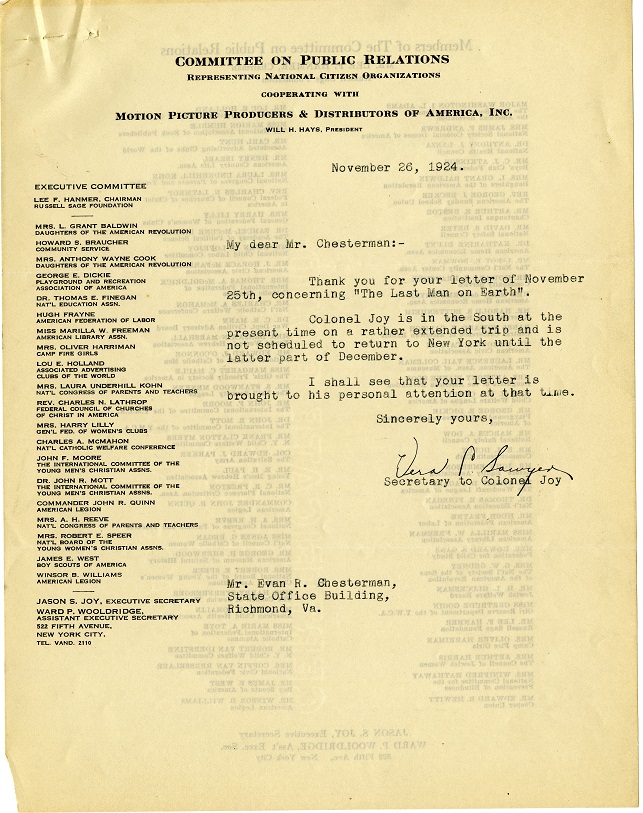 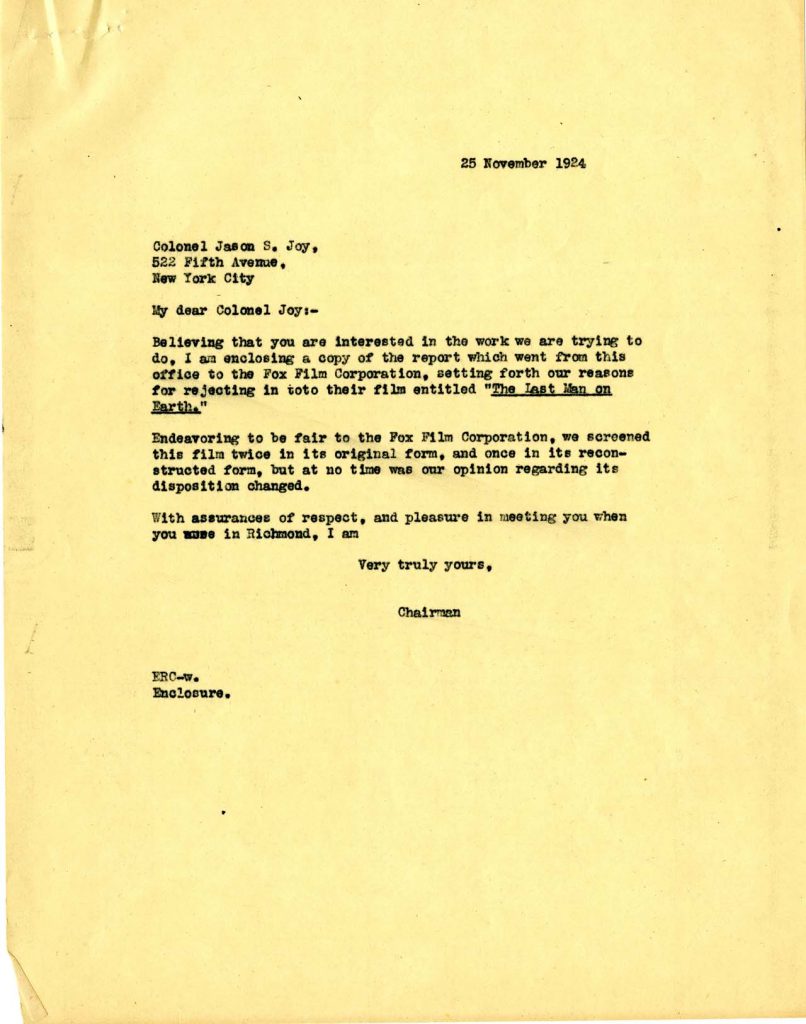 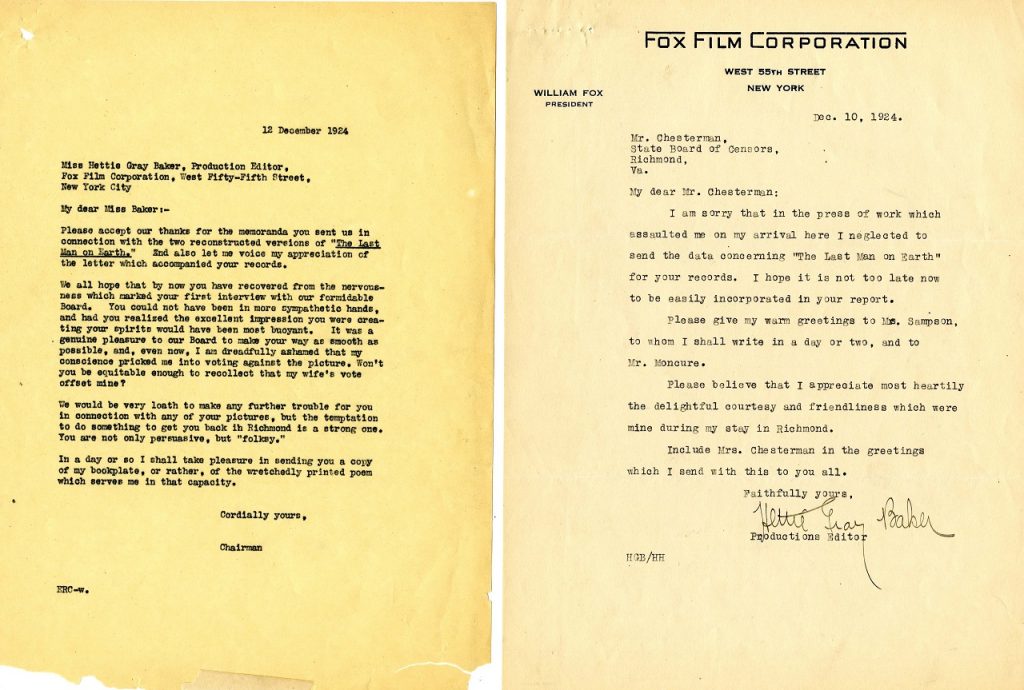 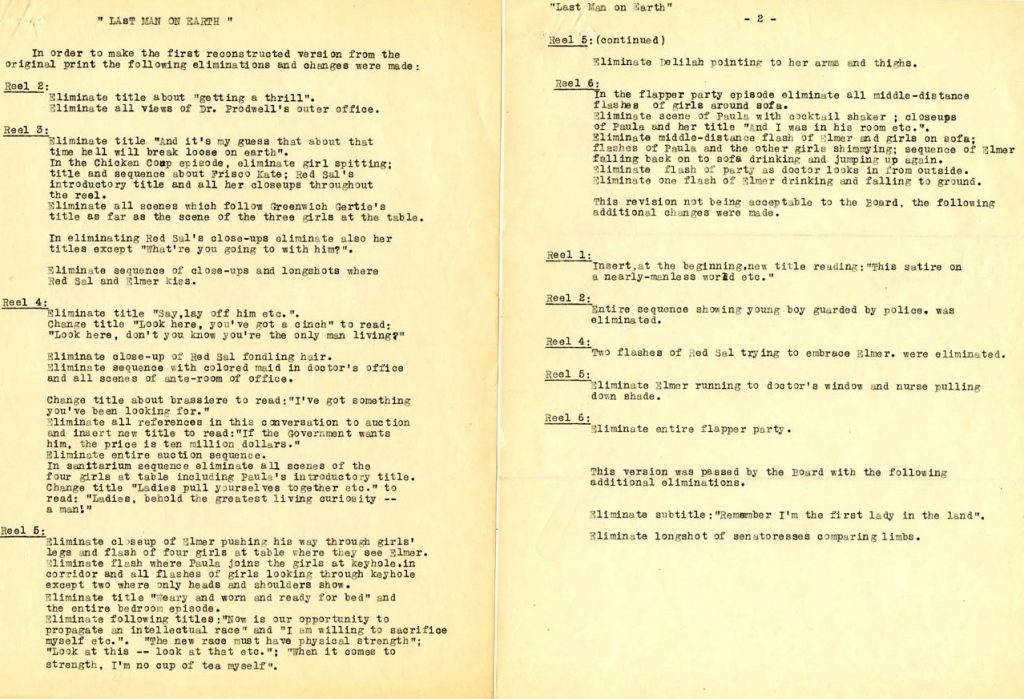 The film was categorized as a comedy. The Board of Censors, however, found little humor in the presentation. The first viewing by the board, in October 1924, resulted in the entire film being rejected. The reasons given came directly from the board’s mandate, obscene, indecent and immoral content. Correspondence from the board explained that “Although The Last Man on Earth is a comedy which has been somewhat elaborately staged, and does not purport to carry a serious message, the picture is of such a nature as to justify its total rejection in its present form. It is full of suggestive situations and questionable subtitles calculated to convey a double meaning. The dignity of womanhood is flouted in almost every reel and an effort is made to win the laugher of the beholder through indecent scenes and salacious or smutty subtitles. Even if the subtitles and the situations depicted could pass muster, there would still be a question as to whether or not the costumes worn by the actors come within the bounds of propriety.” The behavior of the women chasing after the one viable man left on earth caused quite a bit of consternation with the board.

The movie’s producer did submit a revised version of the film, but further correspondence reveals that the board also rejected the second iteration. The final outcome concerning the release of the movie is not clearly stated in the files. However, later letters hint that an agreement was reached for the movie to be shown as the correspondence reflects a very cordial and familiar relationship between the chairman of the Board of Censors and the editor from the Fox Film Corporation. Edits or changes in dialogue or subtitles often resulted in the public showing of a film.

Information concerning the plot of the movie and the image of the movie poster can be found at the Internet Movie Database. Information about the board can be found in The Guide to the Records of the Division of the Motion Picture Censorship Board, 1926-1968, Accession 26515.