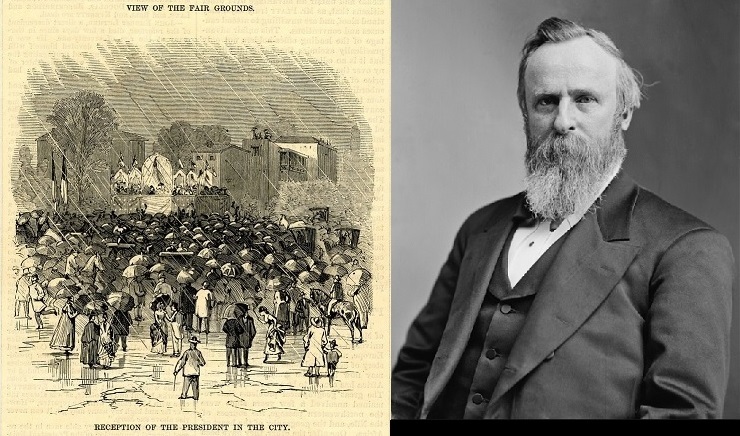 First, a pre-blog promotional announcement! The Library of Virginia has a booth of its own, 627 in the Farm Bureau Center building, at the Virginia State Fair.  In your wanderings through the fair, don’t pass this opportunity to visit and learn something new about your state library. Virginia Newspaper Project cataloger Kelley Ewing will be manning the booth on Sunday from 9:45 to 4, so come on out and say hello!

Rutherford B. Hayes, 19th President, was, like his predecessor Ulysses Grant, a Republican.  Hayes kept a diary.  The entry for November 3, 1877 was brief:

“Our trip to Richmond & return Oct 30, 31 & Nov 1. was altogether a happy and successful one.  There are thousands of intelligent people who are not Democrats, & who would like to unite with the Conservative Republicans of the North.”  That expectation would be postponed until well into the next century.  As for the visit itself, his impression was quite accurate.

Hayes was greeted at the Virginia State Fair (at this time located on N. Boulevard near what’s now the Diamond) and in passage downtown to the Exchange Hotel with great warmth by enormous crowds. This despite the majority of Virginians voting a year ago for his Democratic opponent, Governor Tilden of New York, by a margin that was well beyond dispute. Final returns were not so decisive in three other southern states and on this question the election turned.

How Tilden won the popular vote and seemingly the Electoral College but  still lost the election is a story of no small interest to anyone fascinated by human corruption and guile.  How mollifying  the sound in history texts of “The “Compromise of 1877”  compared to, say, “Backroom Deal of the Century”, for not just the presidency, but the political autonomy and self-determination of the South was in play.  By this agreement of March, 1877, Reconstruction was dissolved, home rule reestablished and Southern black political participation slowly erased.  On to Jim Crow and the legislation so associated. Also, the state’s economic revival was proudly exhibited by a State Fair flexing an expansionary mode.

The President listed the speech topics in his diary as “Education, Immigration, Agriculture, Union vs. Sectionalism.”  The overarching theme then, “You, Virginia, have great business prospects.  Welcome back.”  Not exactly a message the residents of the Capital might have been prepared to hear from a vessel by the name of Grant.  The Richmond press was in solid agreement with Hayes.  Almost full front page coverage in four dailies. The Daily Dispatch is at www.virginiachronicle.com, the other three newspapers have not yet been digitized. 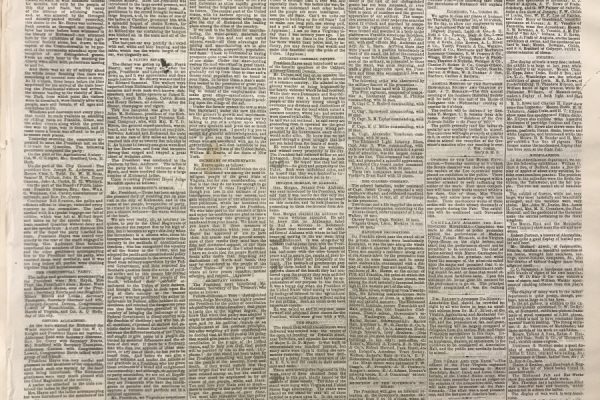 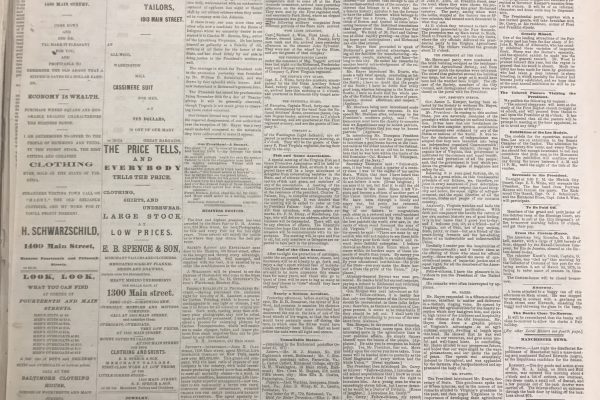 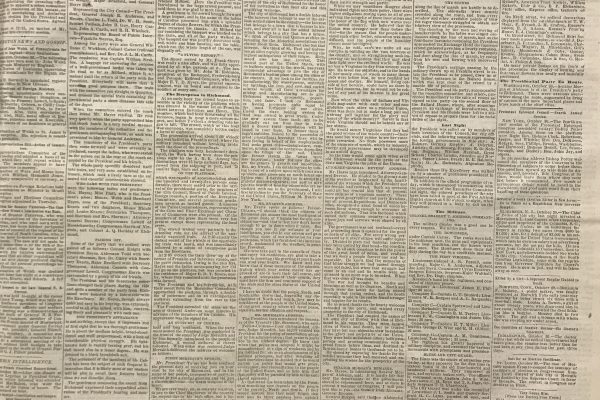 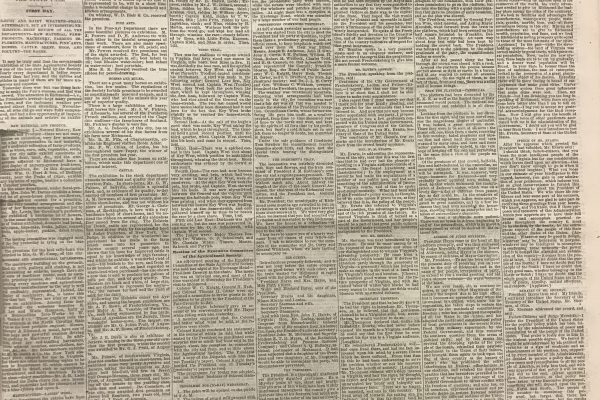 Banal, no doubt, but the past has no choice but to become ever more distant, more strange.  Its movement accelerated by the character of technological change. Archival newspapers are the worker ants of that strangeness.

Imagine a President whose voice you’ve never heard.  His photographic representation is scant, only a handful of images.  Maybe a single visage thrummed into your eyes (see above) in the days before the election.  Among the local officials who joined the President’s train in Quantico as it headed south to Richmond, a pair of reporters, one from the Enquirer and the Dispatch.  For many in their readership, I imagine, there existed a real hunger for any details of the President’s persona rather than column after column of political speeches: 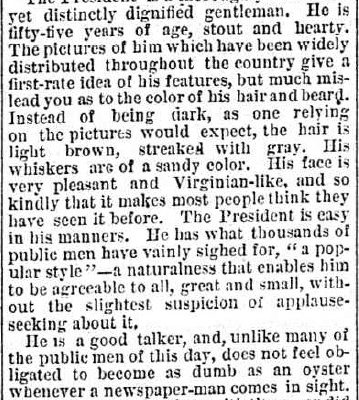 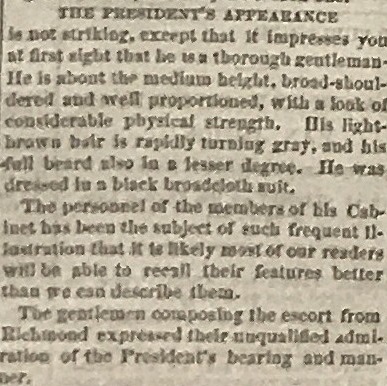 As often happens  when studying old newspapers, it’s the unexpected, the unsearched for, that stimulates interest.  From the bottom hem of page one, November 1, of the Daily Dispatch:

Don’t forget to visit us at the Virginia State Fair this weekend! 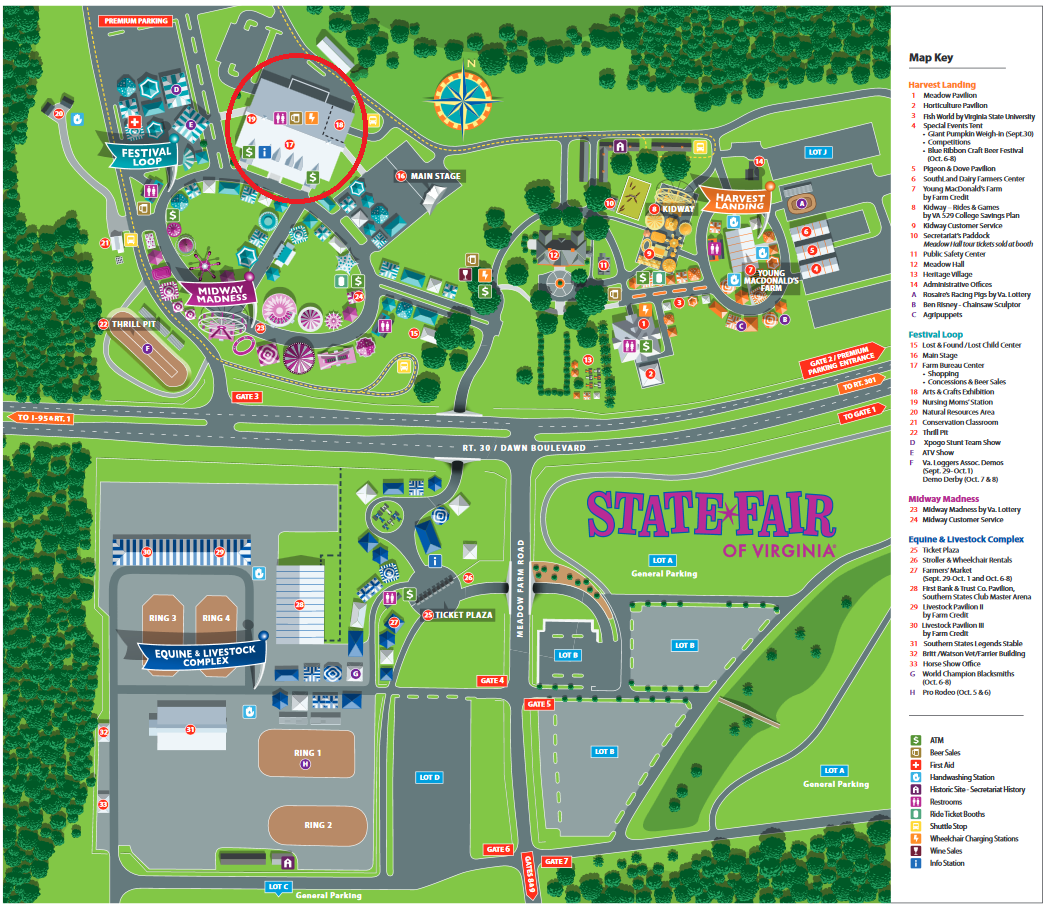