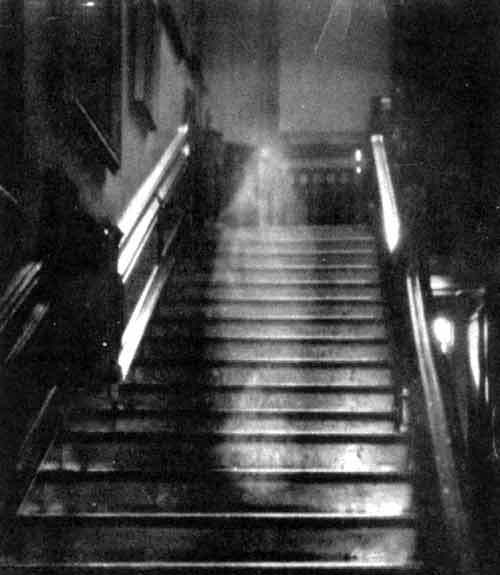 Ghosts in the Archives: Communing with the Virginia Historical Inventory

Occasionally, we ask guest writers to share information or stories about researching in our collections, public library programming or activities, and other topics which Library of Virginia users may find informative. Today’s guest blogger, Dr. Alena Pirok is an Assistant Professor of History for Armstrong State University.

In recent years, tourists and locals alike have flocked to Virginia’s many old downtown areas to attend ghost tours. These events have quickly become popular ways to learn about the ways that the past lingers in the present day, but the relationship between Virginia’s history and its ghosts is much older than the tours. The Virginia Historical Inventory (VHI) records held at The Library of Virginia illustrate that historical ghost-lore is not a new trend; Virginians in the 1930s and 1940s saw hauntings as appropriate and desirable elements of historical properties as well.

The VHI was part of the Federal Writers Project (FWP), a leg of President Roosevelt’s New Deal programs. The FWP program hired authors to write, and researchers to find and document, iconic American stories and locations. In Virginia, researchers spanned out across the commonwealth documenting the location, status, and history of eighteenth- and nineteenth-century buildings. This brought them to familiar cities like Williamsburg and Alexandria, and to smaller, more rural places that were best described by the nearest highway. They collected the information they needed from archives, newspapers, and interviews with homeowners and neighbors. Written sources gave them the names of previous owners, construction dates, and famous events.

The oral interviews filled in the stories not present in the archives. In many cases, when the researchers spoke with locals they used ghost stories to connect their corners of the Old Dominion to larger historical narratives, and to illustrate how the past continued to exist in the present day. The specters of Civil War battles, Revolutionary war heroes, nineteenth-century travelers, and jilted brides seemed to occupy every small town, lending historical meaning to even the most derelict homes. While the project sought to collect architectural information first and historical information second, the researchers inadvertently created a collection of Virginia ghost-lore.

In all, more than 40 ghost stories became part of the official government reports under the subheading “Historical Significance.” But even more fascinating than the simple existence of these stories in architectural records, is the fact that the ghost stories were not especially scary. Rather than being tantalizing tales of the uncanny, Virginians reported the ghosts with the same tone as, and alongside of, lists of past residents, large trees, and architectural descriptions.

Take for instance the report that Susan R. Beardsworth wrote up in the summer of 1937 about a mid-nineteenth-century house in Lynchburg called the Poston house. Beardsworth reported that the house was a “story and a half brick” dwelling, that was built in “three sections” and “remodeled or rebuilt twice.” She said the home was “very plain, simple and quaint looking,” but it was the only of its kind in the city. The current homeowner told Beardsworth to take note of the bricks, which he found to be “inferior” and poorly fired. Despite its age, singularity in the town, and unique brick work, Beardsworth wrote that the home’s main historical significance was “its legends and ghost stories.”

One story about the Poston house concerned a “beautiful Sheraton mahogany” cradle that rocked on its own. Reverend Smith, a previous resident, thought that none other than “Beelzebub” rocked the cradle. As a religious man, Smith tried to cast the demon out, but the cradle kept rocking. The story quickly spread to the surrounding towns, and soon Smith found people knocking at his door asking to see the cradle that rocked itself. Over time, the cradle stopped moving and was removed from its rockers, but the house remained well known. The cradle story inspired people to understand the home’s quirks in terms of the ghosts of past residents.

Another such story claimed that the ghost of an alcoholic Confederate major kept the dining room doors and windows open. Beardsworth explained that when the major was in his “delirium tremens stage” his family locked him in the dining room to dry out. Locked in, sick, and angry, the major beat the room’s walls, doors, and window frames with a fireplace poker. Long after his death, the wood still bore the marks of his attempted escapes. Beardsworth reported that various rumors placed the major’s ghost in the room after his death. Subsequent owners claimed that his ghost opened the dining room’s doors and windows at night, even after they were securely locked. 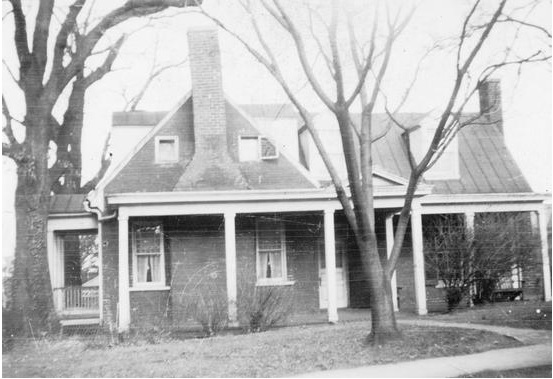 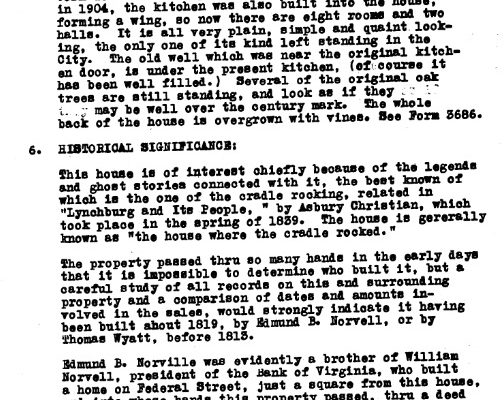 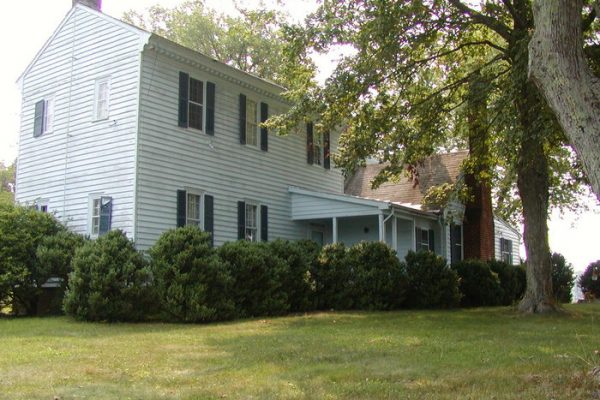 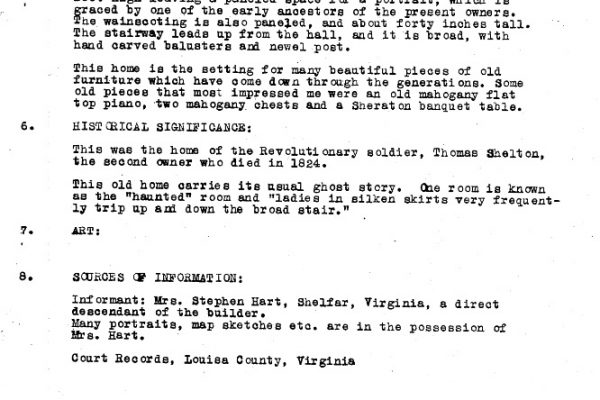 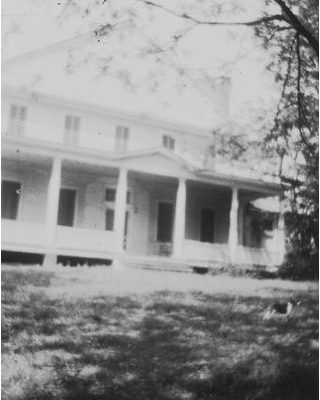 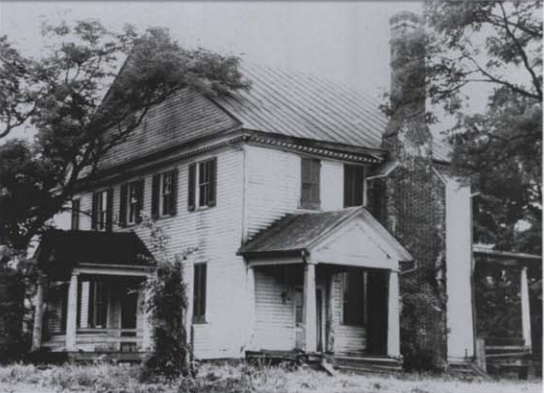 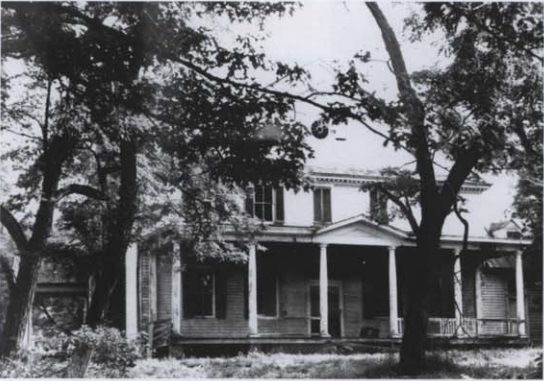 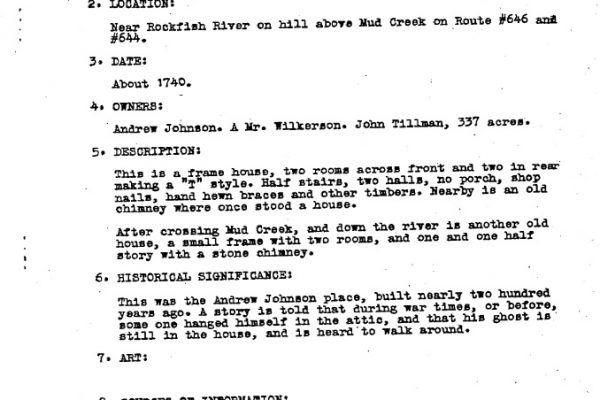 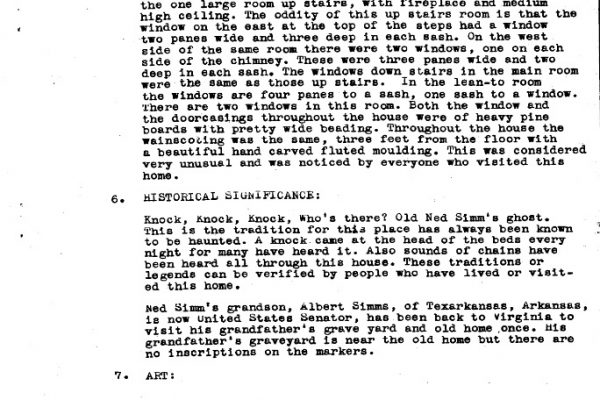 For the owners and residents of the Poston house, understanding the home’s history and significance meant knowing about or having seen its ghosts. And of course, residents of the Poston house were not the only ones who shared their homes with ghosts. At Roseneath in Louisa County, residents believed that the ghost of a Revolutionary-era solider named Thomas Shelton resided in “the haunted room,” tripping women as they walked up and down the stairs. At Cloverland in Prince William County, homeowners talked of a murderer whose specter washed blood off of his hands in the late hours of the night. Those who lived in the Johnson place in Nelson Country argued that the historical importance of their home came from their ghost who arrived “during war times, or before.” The residents of Still Valley in Madison County knew that the “knock, knock, knock” coming from their headboards at night was none other than the ghost of the cantankerous “Old Ned Simm.”

According to the records left by the VHI, people across Virginia used ghost stories to explain how their homes retained the past, and how the past made itself present in their lives. Some stories were mysterious like at Cloverland, and others like the major’s ghost at Poston house expressed a connection to a specific person and historical narrative. While details and historical connections varied across the reports, all of the ghost stories in the VHI files illustrated the idea that hauntings reinforced historical significance. For these homeowners and their neighbors, ghosts were evidence that their properties, like the entirety of Virginia, had a strong connection to the past. Far from being a new fad, Virginians have often looked to the uncanny and the otherworldly to explain how the past shapes and defines their lives in the Old Dominion.