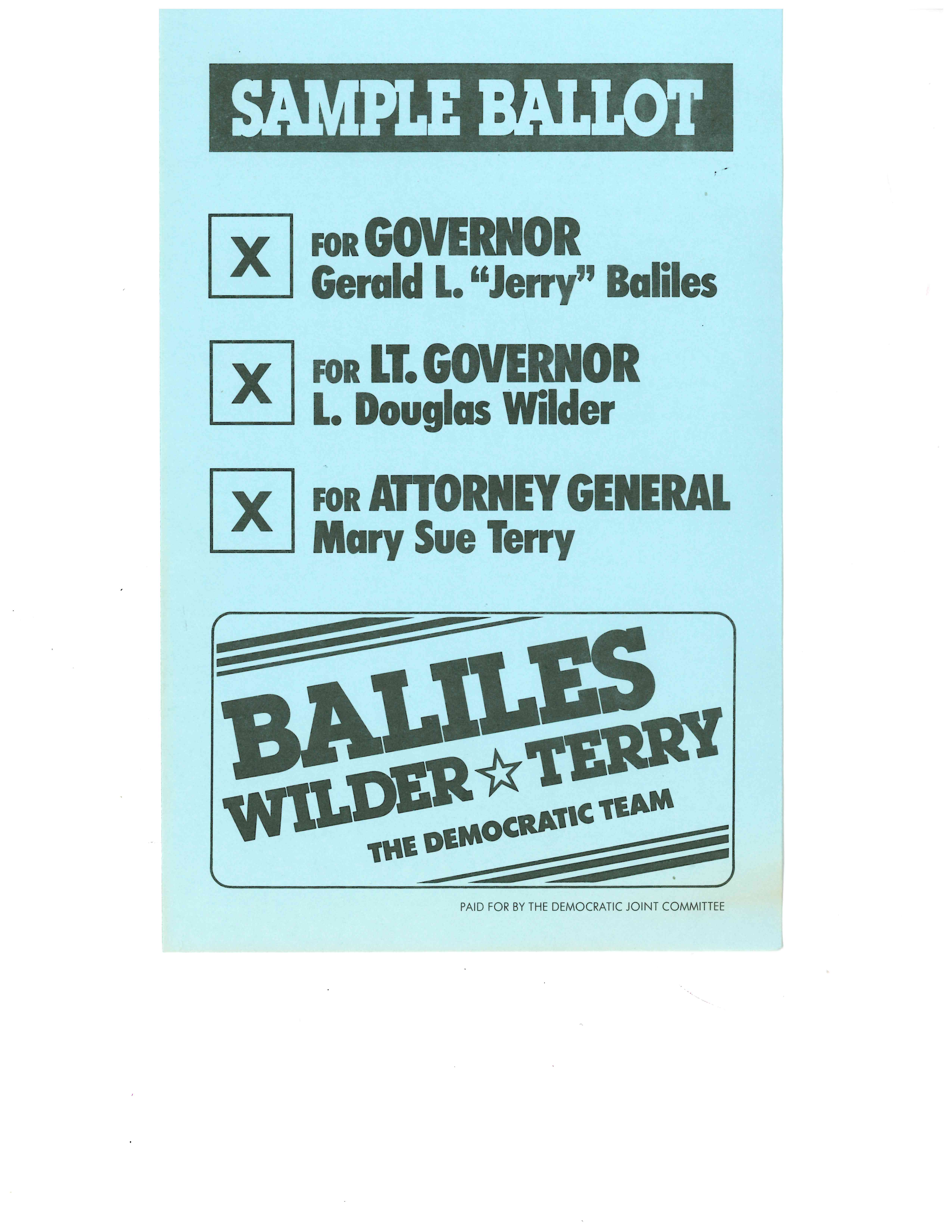 Vote For Me! Governor’s Election Records at the Library of Virginia

As everyone should be aware, it’s almost time to vote for a new governor of Virginia. Election Day is next Tuesday, 7 November, but going to the polls today can be rather boring compared to elections of the 18th and 19th centuries. In addition to casting a vote, early elections were an occasion to gather at the courthouse, socialize, have drinks, and catch up on the latest news. Over time, laws and regulations imposed a more serious and sober atmosphere on the elections: an act was passed in 1838 prohibiting betting, and another to prevent drunkenness and disorder was passed in 1866.

The Library of Virginia contains a variety of resources on elections, including election returns in both published and manuscripts sources. The website for the Virginia Department of Elections (formerly called the State Board of Elections) shows a variety of returns. The Library has also developed research guides and bibliographies for Presidential and Congressional Election Returns, Gubernatorial and State Office Elections Results, and Published Returns. A collection of materials related to the electoral college has also been digitized. 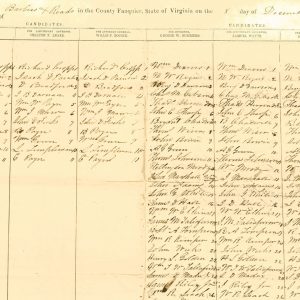 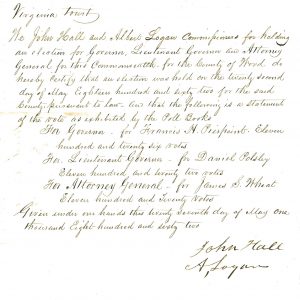 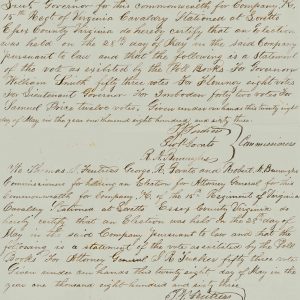 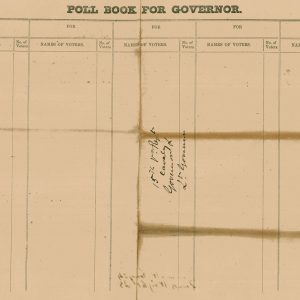 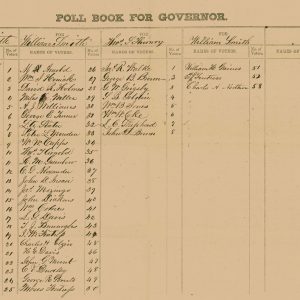 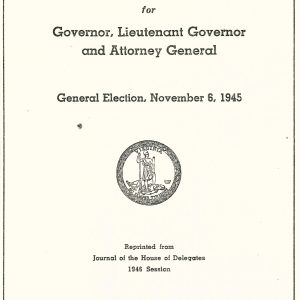 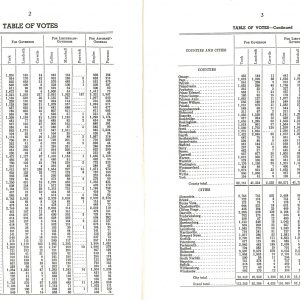 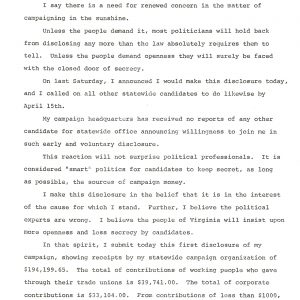 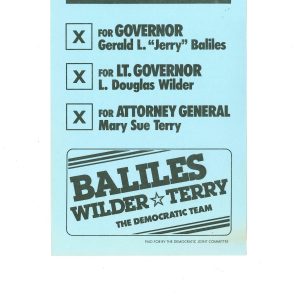 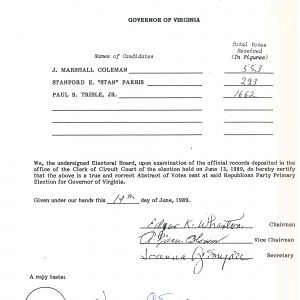 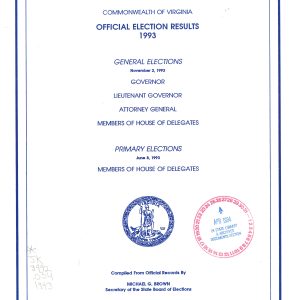 In addition to the two laws mentioned above, Virginia’s electoral processes have seen a number of changes over the past four hundred years.

Starting in colonial times and well into the 19th century, voters stated their vote publicly to the sheriff who duly recorded their name under a candidate’s name in a poll book. In fact, Virginia’s 1830 and 1851 constitutions specifically state that voting will be by voice and not by ballot. The 1864 Virginia Constitution stated for the first time that votes would be given by ballot and not by voice, and the first law to regulate ballot voting in Virginia was enacted in 1894.

The Virginia Constitution of 1776 provided for the election of the governor and attorney general by a joint vote of both houses of the General Assembly, a process which also involved the election of a Council of State to assist the governor. The president or senior member of the Council acted as lieutenant governor in case of the death, inability, or absence of the governor. The joint vote of the General Assembly for governor was recorded in the journals of the House of Delegates. The 1851 Constitution abolishing the Council of State and authorizing the popular election of the governor, lieutenant governor, and attorney general. The first general election of a Virginia Governor was held 8 December 1851. He was elected to hold office for four years and was ineligible to succeed himself. This is still in effect today.

The Library has returns for the Governor and Lieutenant Governor for the 1850s but the record is spotty after that until 1897. This is largely because the period between 1860 and 1870 was one of turmoil and war, including the division of the state into Virginia and West Virginia. On 17 April 1861, a Virginia convention of delegates in Richmond voted to secede from the United States. On 23 May, voters ratified the Ordinance of Secession and Virginia joined the Confederacy.

During the Civil War, Virginia had two state governments. One was at Richmond, under the Confederate States of America; John Letcher (1860-1864) and William Smith (1864-May 1865) served as governors under this government. The Restored government, under the United States of America, was first at Wheeling (until West Virginia became a state in 1863) and then at Alexandria. The Library of Virginia has 1862 election results for the governor of the Restored government, as well as 1863 results for the Confederate governor. As noted in a recent blog post, the Library also has poll books for 1867, when African American men voted for the first time.

In addition to official returns, there are a variety of other types of records relating to the gubernatorial races. Some of these include campaign posters, sample ballots with names of candidates checked, campaign financial disclosures, and WRVA radio station recordings, such as a report on election night in 1969. It includes the concession speech of Democrat William C. Battle to Republican Linwood Holton.