On the evening of 11 November 1892, attorney and Democratic Party operative John T. Clark shot and fatally wounded Reverend John R. Moffett on the streets of Danville. Moffett, minister of North Danville’s Missionary Baptist Church, had feuded with Clark previously. Religious people and churchmen claimed that he was targeted for loudly proclaiming his intense anti-liquor views. In their minds, Moffett was “the first martyr to the Temperance cause,” a heroic figure battling the bottle and its terrible social consequences. In reality, as historian Richard F. Hamm has persuasively argued, Moffett’s murder reflected deep divisions in Danville—and Virginia—of race, politics, and issues of local control. As a closing chapter of our blog posts related to the exhibition “Teetotalers and Moonshiners,” we will take a look at Library sources related to the events leading to the murder and the trial and its aftermath to tease out these themes.

Rev. Moffett published a newspaper dedicated to the Prohibitionist cause. The Tennessee State Library and Archives recently donated a rare issue of Anti-Liquor to the Library. The masthead proclaimed that “Anti-Liquor is a temperance and prohibition monthly, issued for the sole purpose of educating the people upon the evils of the drink habit, and especially to turn light upon the question of Legal Prohibition.” Moffett’s powerful words, delivered in speeches and in the pages of Anti-Liquor and the Danville Bee, caused him to cross the Democratic establishment and especially John T. Clark. His declaration that he “would rather have good Negro rule than the rule of the alcoholic devil” put him strongly at odds with the local Democratic machine, which sought to eliminate black voting. The party’s tenuous hold on political power in Danville, with its African American majority, was based on white solidarity—and Moffett had publicly voted for the Prohibition Party. Even after his death, many townspeople remained unsympathetic to Moffett due to his Prohibitionist views and unsuccessful attempts to turn Danville dry through local option.

Commentary on the trial reflected these larger themes. Newspaper editors across the state avidly followed the trial and reported the defense’s attempts to justify the killing. The Appomattox and Buckingham Times quoted the three-hour closing speech of attorney R. W. Peatross, who claimed that “Clark had been slandered, insulted and hunted down; not by the preacher Moffett, but by Moffett, the political leader, and leader of a political party. He said preachers have a right to go into the political area If they so elect but when they get there they must stand on the footing of a politician and not claim the name of the preacher’s rights.”

Peatross also denounced “the efforts of the church and prohibition papers to make Moffett a martyr and his death chargeable to this community.” The Richmond papers and many well beyond Virginia covered the trial with interest.

The jury did not wholly buy the defense’s arguments. They convicted Clark of the lesser charge of voluntary manslaughter and sentenced him to five years in the Virginia State Penitentiary. Clark’s successful writ of error to the Supreme Court of Appeals highlighted the contentiousness of the trial in the community. The Northern Neck News reprinted a piece from the Baltimore Sun noting that “a number of exceptions were made to the rulings of the lower Court.” One objection stemmed from the use of jurymen from Lynchburg since it was deemed that only one Danville juror could be found who had not been unduly prejudiced in the case.  The Northern Neck News also reported that “the record in the case is very voluminous, and the printing alone will cost about $300.” Ultimately, Clark’s appeal fell on deaf ears. The Roanoke Baptist Union reported the confirmation of the lower court’s decision by the Supreme Court of Appeals and pointedly noted that the justices had concluded that “from the evidence the jury would have been justifiable in finding him guilty of murder in the first degree.” 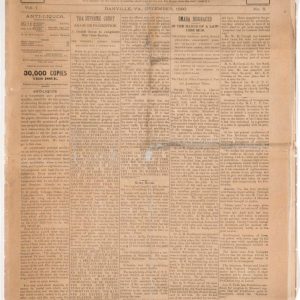 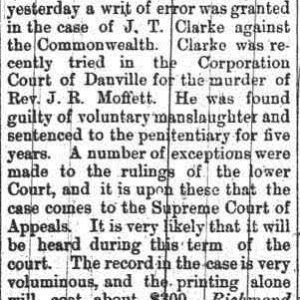 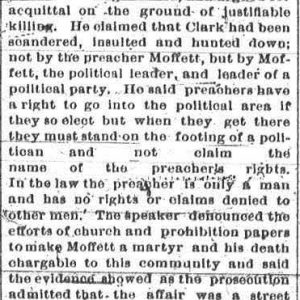 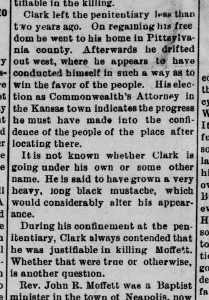 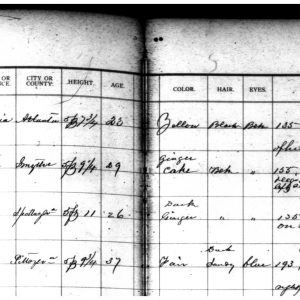 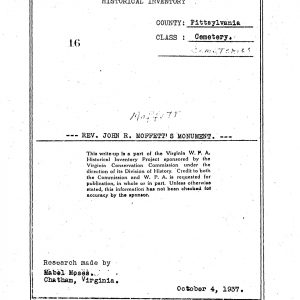 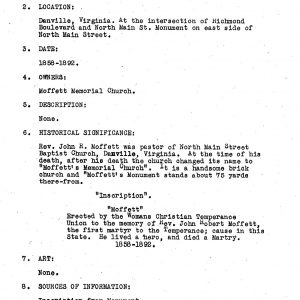 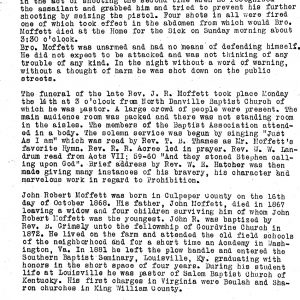 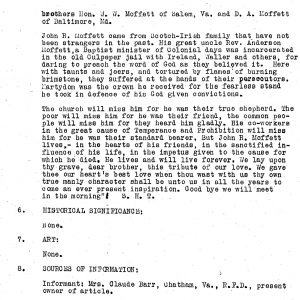 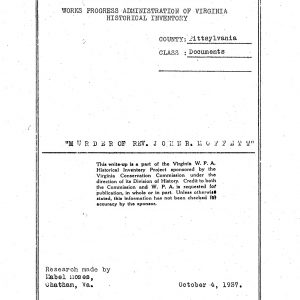 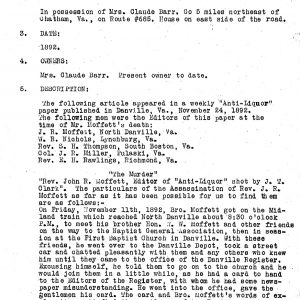 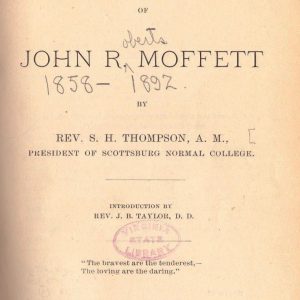 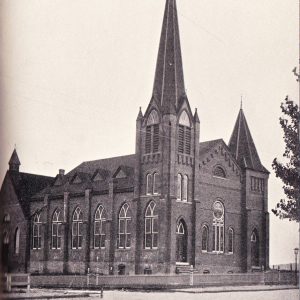 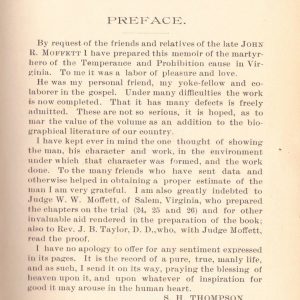 Despite the complexities of the case, Moffett’s supporters largely won the battle for his legacy and memory. Moffett is featured in two 1937 entries in the Virginia Historical Inventory, a project of the Great Depression-era Works Progress Administration. The project documented everything from historical buildings to small artifacts across the Commonwealth. Mabel Moses, a worker for the federally-funded project, visited with Mrs. Claude Barr of Chatham, Pittsylvania County, on 4 October 1937, and documented a 24 November 1892, clipping from Moffett’s Anti-Liquor newspaper that recounted the minster’s murder as a cowardly assassination. Moses also created a Virginia Historical Inventory entry for the monument to Moffett near his church which bears the inscription: “Erected by the Women’s Christian Temperance Union to the memory of Rev. John R. Moffett, the first Martyr to the Temperance cause in this State. He lived a hero, and died a Martyr.” The memorial still stands in a triangle bounded by North Main and Moanna Streets and Richmond Boulevard. Likewise, a biography by Rev. S. H. Thompson entitled The Life of John R. Moffett portrays him as a man of sterling character and a noble martyr to the Prohibition cause. His widow is listed as the publisher and the book includes portraits of his orphaned children; the proceeds from the book went to his family. Another illustration shows the minister’s church, which was renamed Moffett Memorial Church after his death. The original church burned down on 29 June 1971 after being struck by lightning, but the new building still stands on the original site.

And what of J. T. Clarke? He entered the Virginia State Penitentiary on 21 December 1893, and served his five-year sentence. On 25 April 1898, he walked through the prison gates and again become a free man. The Staunton Spectator and Vindicator reported that “during his confinement at the penitentiary, Clark always contended that he was justifiable in killing Moffett. Whether that were true or otherwise, is another question.” He returned to Pittsylvania County but, probably not appreciating his local notoriety, he went west and soon became the commonwealth’s attorney of a leading town in the state of Kansas.