The 1907 Monuments in the Press

In the late spring of 1907, forty-two years after the end of the Civil War, Richmond was flooded with veterans and tourists for a 5 day celebration of the city’s two newest Confederate monuments and the seventeenth reunion of the United Confederate Veterans.

First, on May 30, the equestrian statue of J.E.B. Stuart was unveiled by his eight year old grand-daughter, Virginia Stuart Waller. The following Monday, June 3, on what would have been his 99th birthday, the monument to the President of the Confederacy, Jefferson Davis, was dedicated. 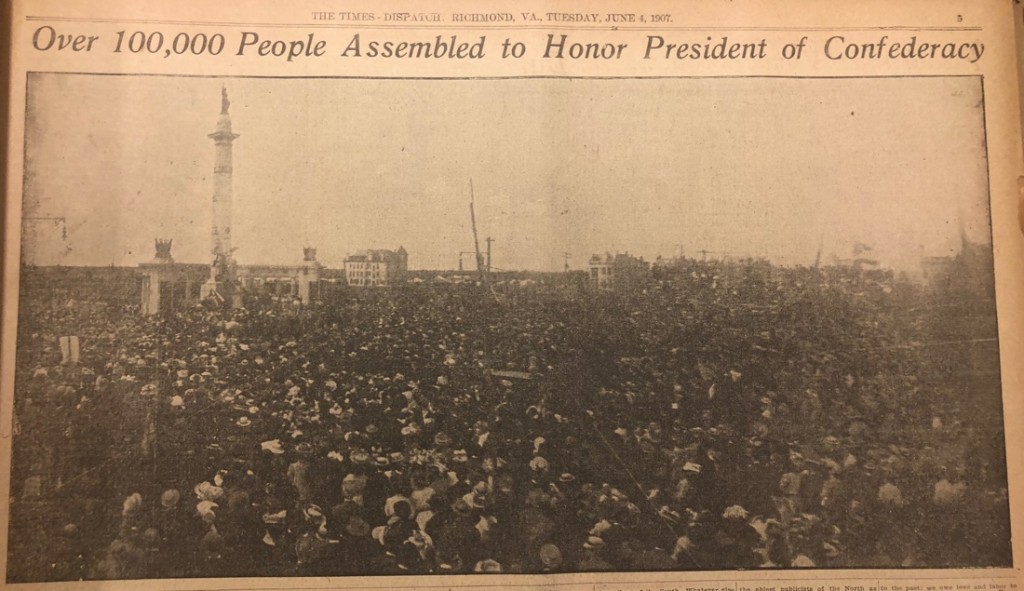 The white press gave huge amounts of space in their papers to the monuments and the Confederate reunion. The Times Dispatch went to great lengths to impress upon its readers the majesty and importance of the days events:

“In the presence of a great multitude of people, and beneath cloudless skies, with the thunder of cannon, the waving of flags, the singing of children and the playing of bands, the equestrian statue of Major-General J. E. B. Stuart was unveiled yesterday by a granddaughter of the world-famous cavalry leader. . .The exercises of the monument were preceded by one of the most notable parades ever seen in Richmond, in which nearly 10,000 men participated, the column taking over an hour to pass a given point.”

The “Grand Parade” was a long one. It began downtown at Capitol Square and moved to the site of the J.E.B. Stuart monument (nearly two miles away), at Monument Avenue and Lombardy Street, then went nearly two more miles to Hollywood Cemetery, adjacent to Richmond’s Oregon Hill neighborhood, to decorate the graves of Confederate soldiers buried there. 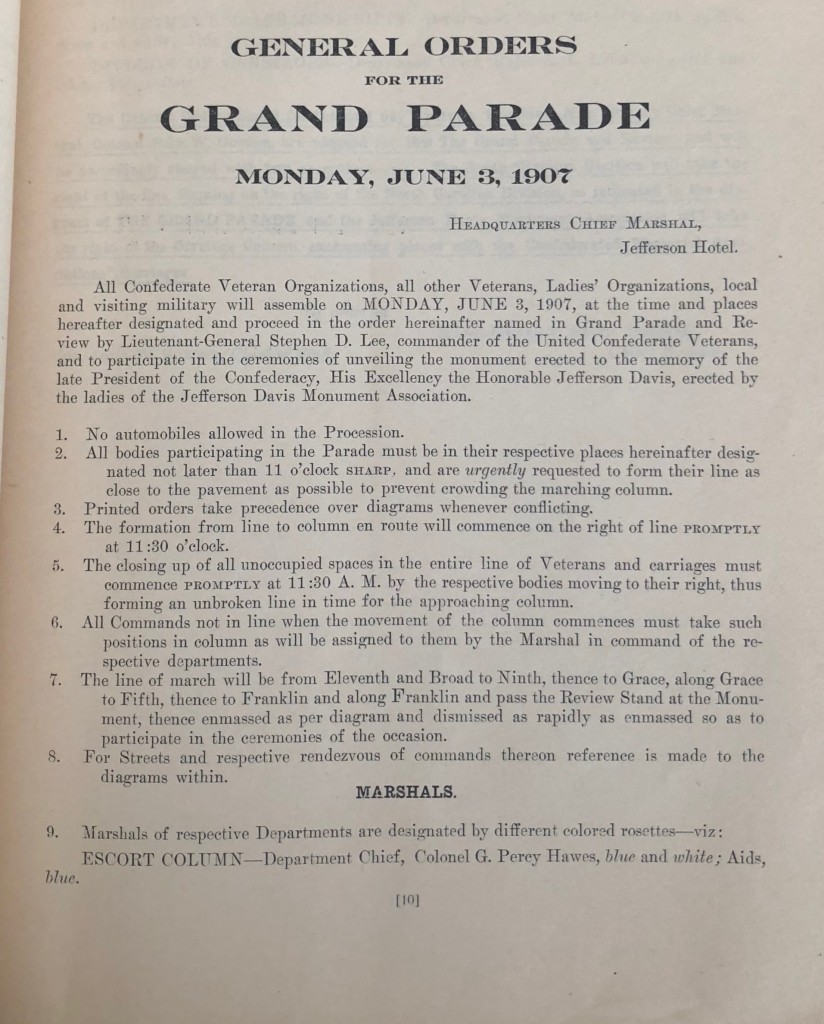 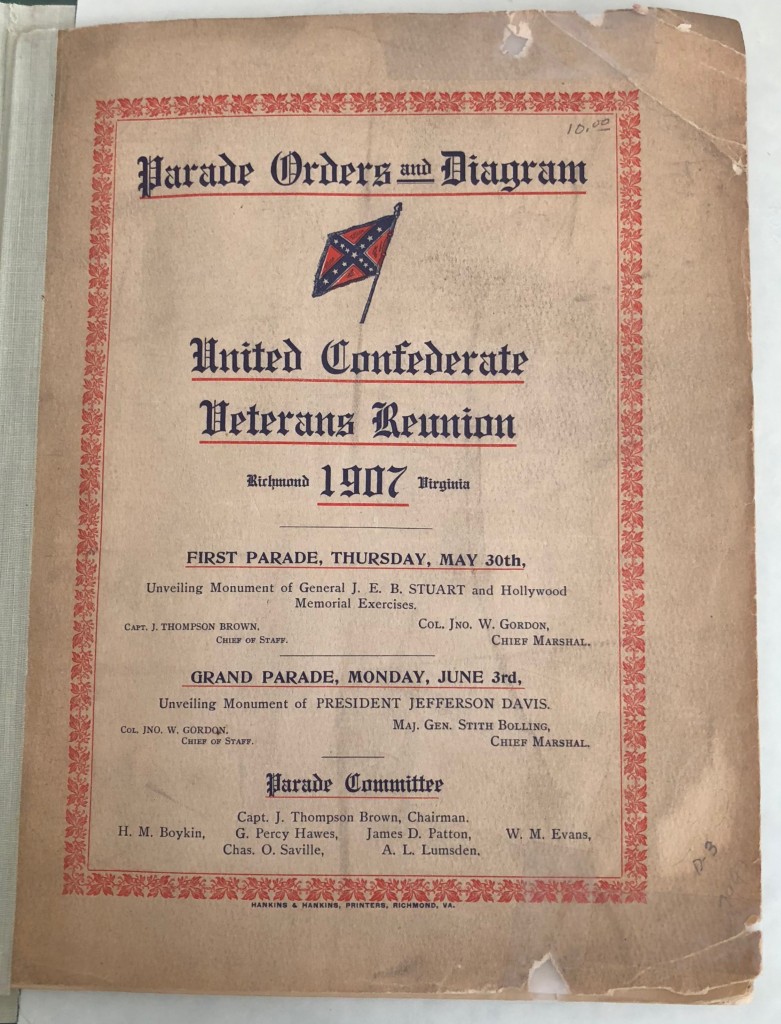 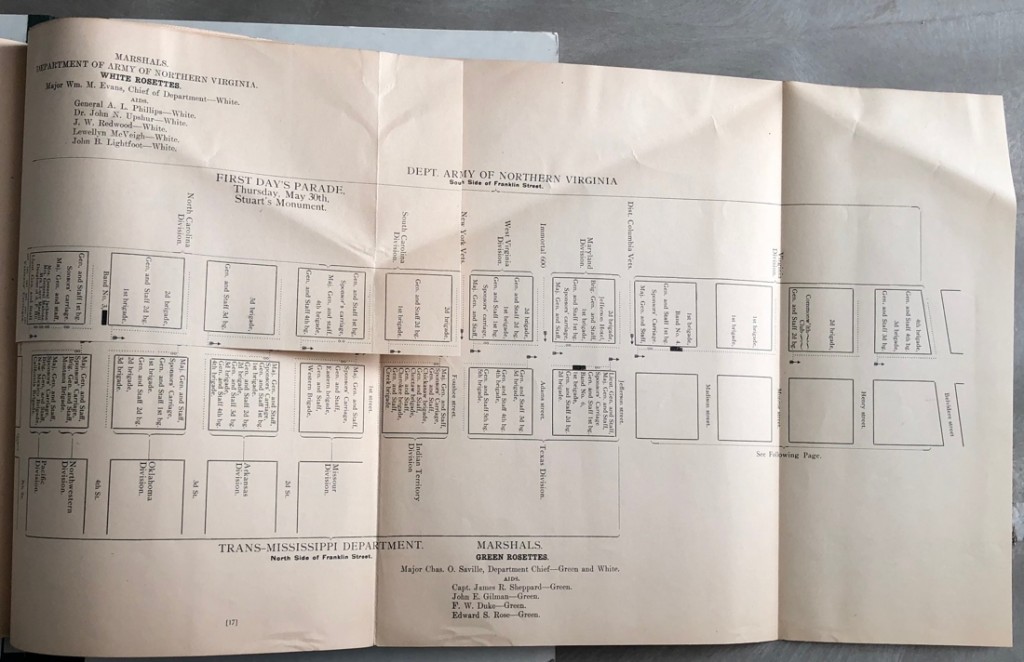 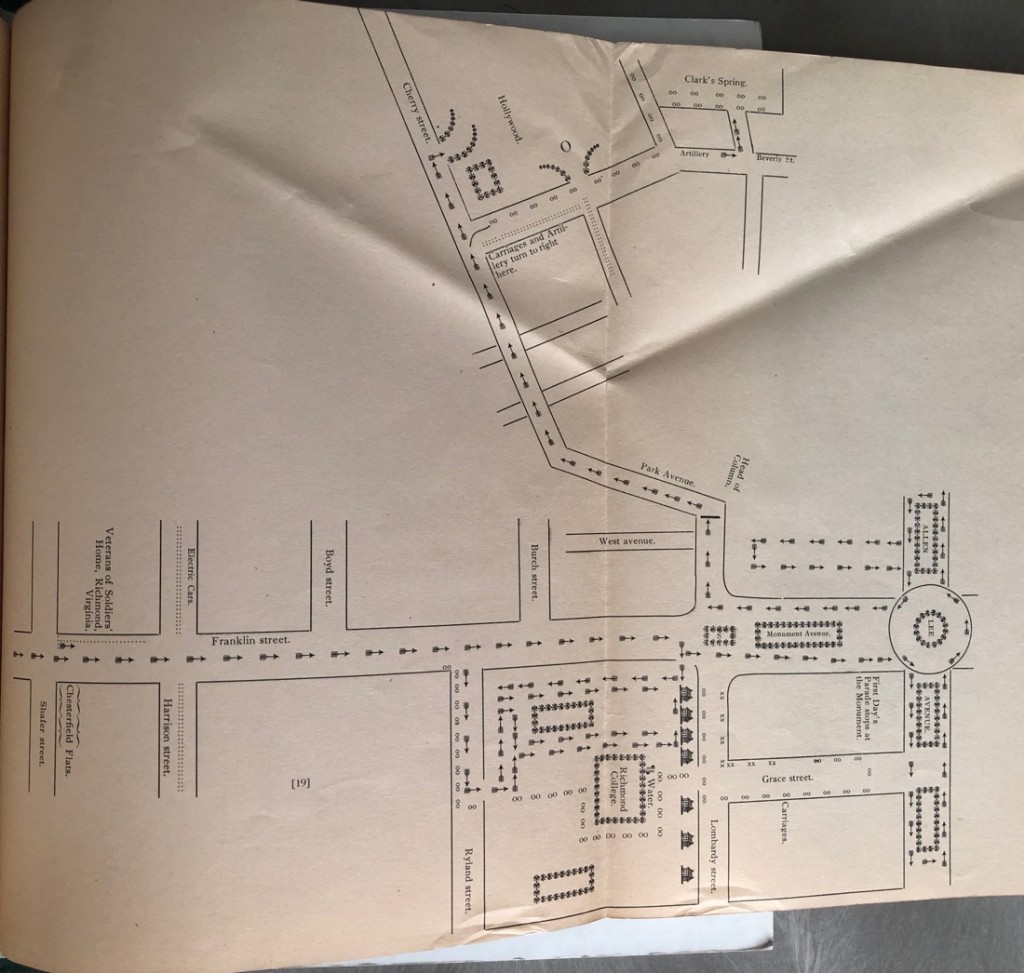 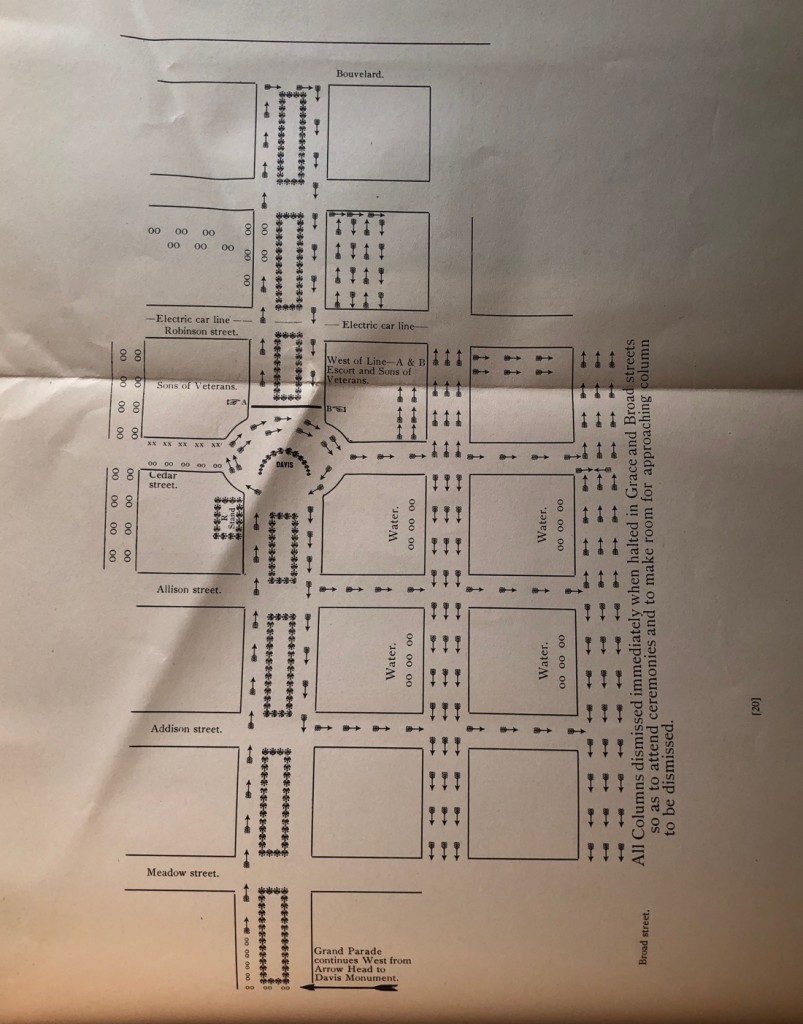 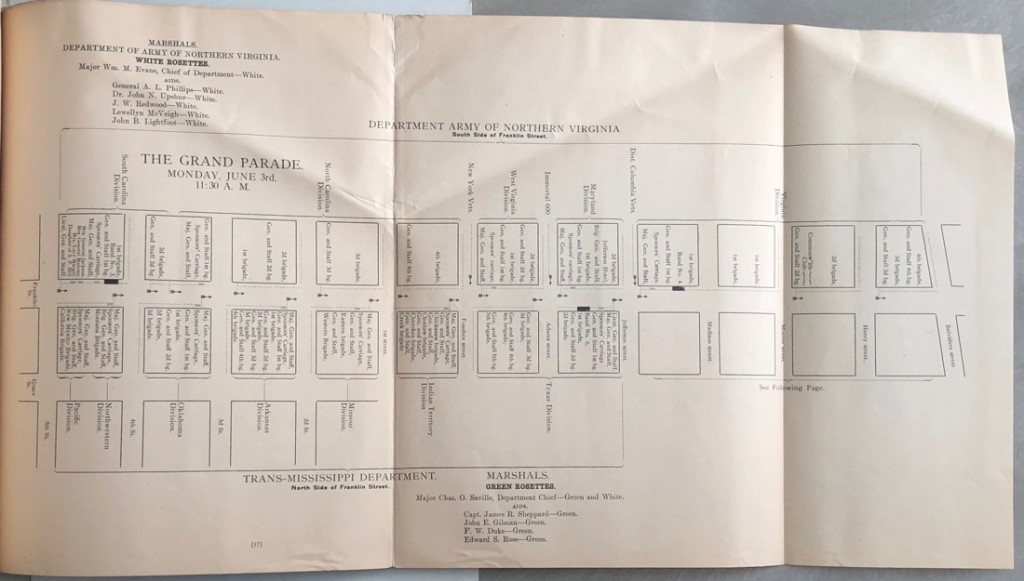 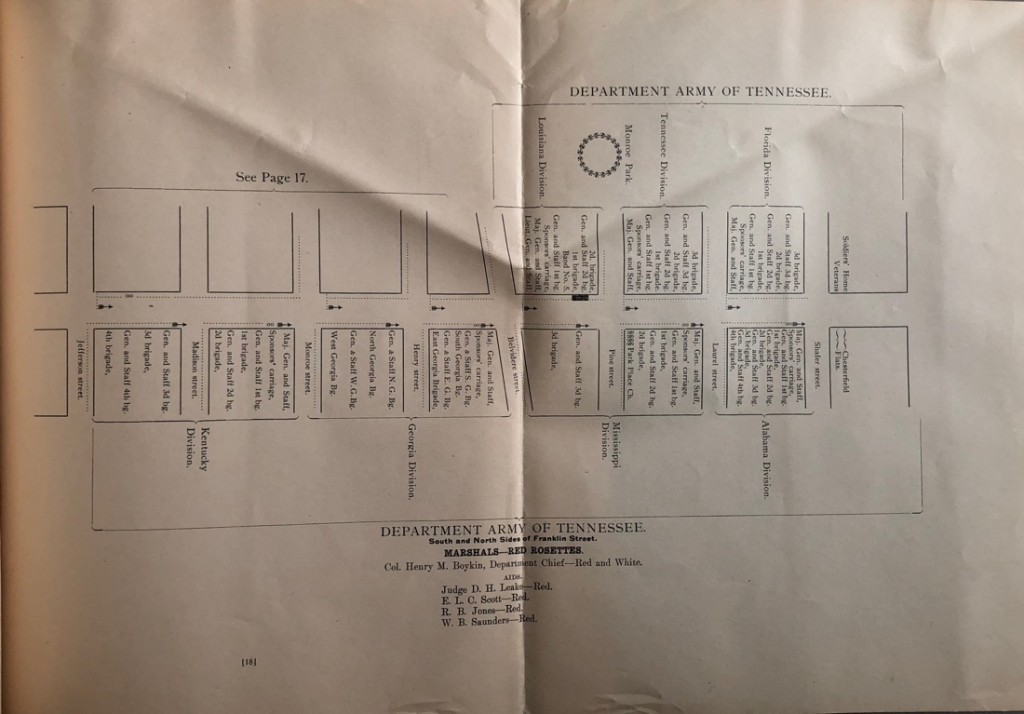 Crowds flooded Richmond for the event, though hard numbers differ. The Alexandria Gazette asserted that 30,000 members of the Grand Camp of Confederate Veterans assembled in Richmond for the occasion, while the Washington Herald wrote, “Again the streets of the old Confederate capital quiver and rumble beneath the tread of marching men in grey. They poured into the city from every point of the compass, swelling the great throng that was already here…never before has the city been so crowded.” The Times Dispatch wrote that “80,000 grateful sons and daughters of the south…lined the way” of the parade. The Times Dispatch claimed that only a quarter of that number had attended (presumably one day of) the Tercentennial Exposition held at Jamestown.

Multiple papers stressed that the reunion was also extremely significant in that it would almost certainly be the last the veterans themselves attended. The Alexandria Gazette wrote that it was “the last great reunion of Confederate veterans.” The Washington Herald seconded the sentiment, writing, “it is doubtless the last time the old men will come here.” 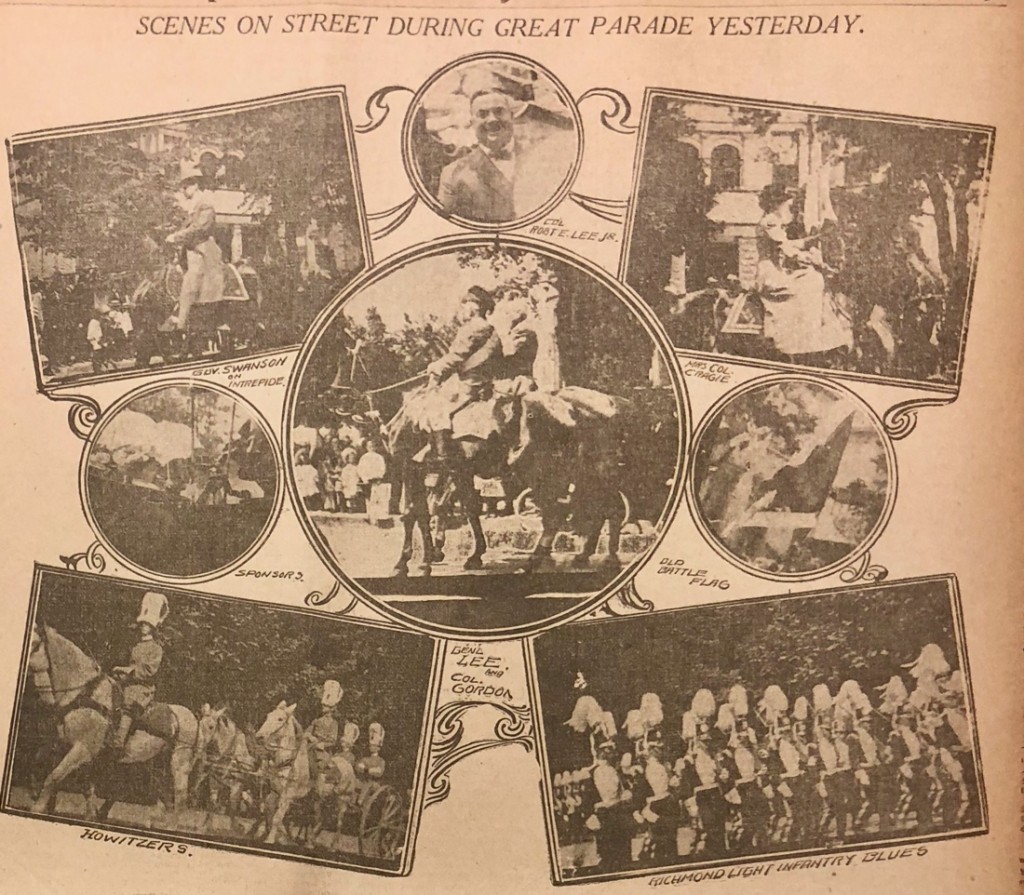 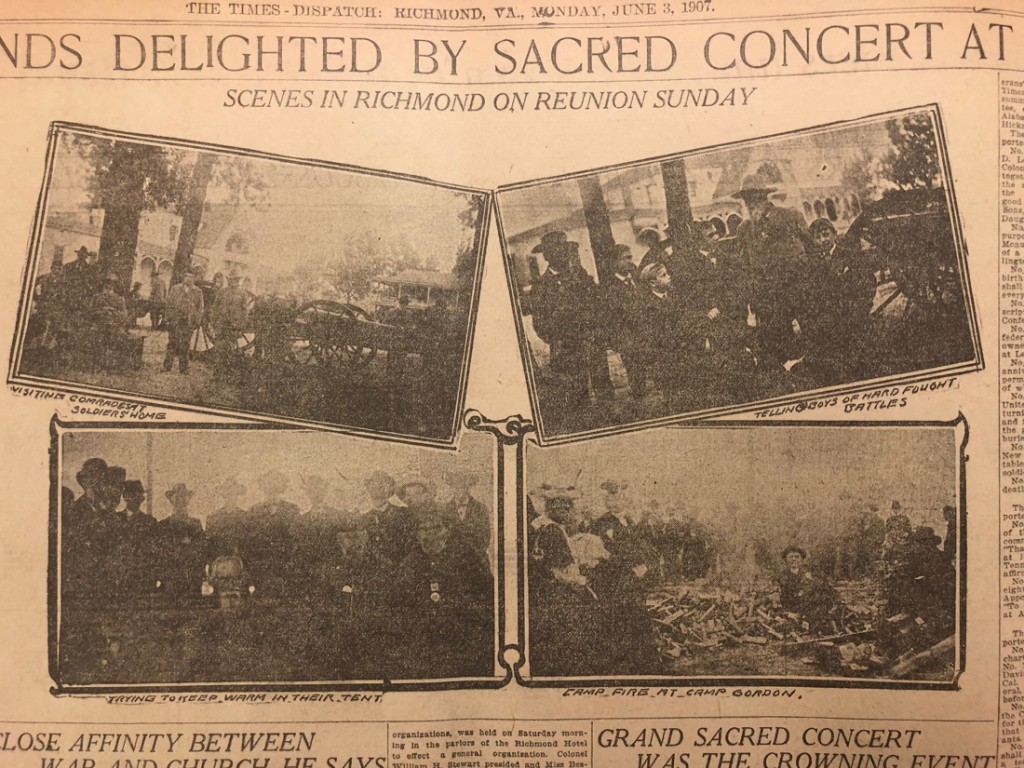 The Times Dispatch published a special “Reunion Edition” to honor the weekend’s pageantry. It featured several color lithographs and many portraits of veterans and event organizers. 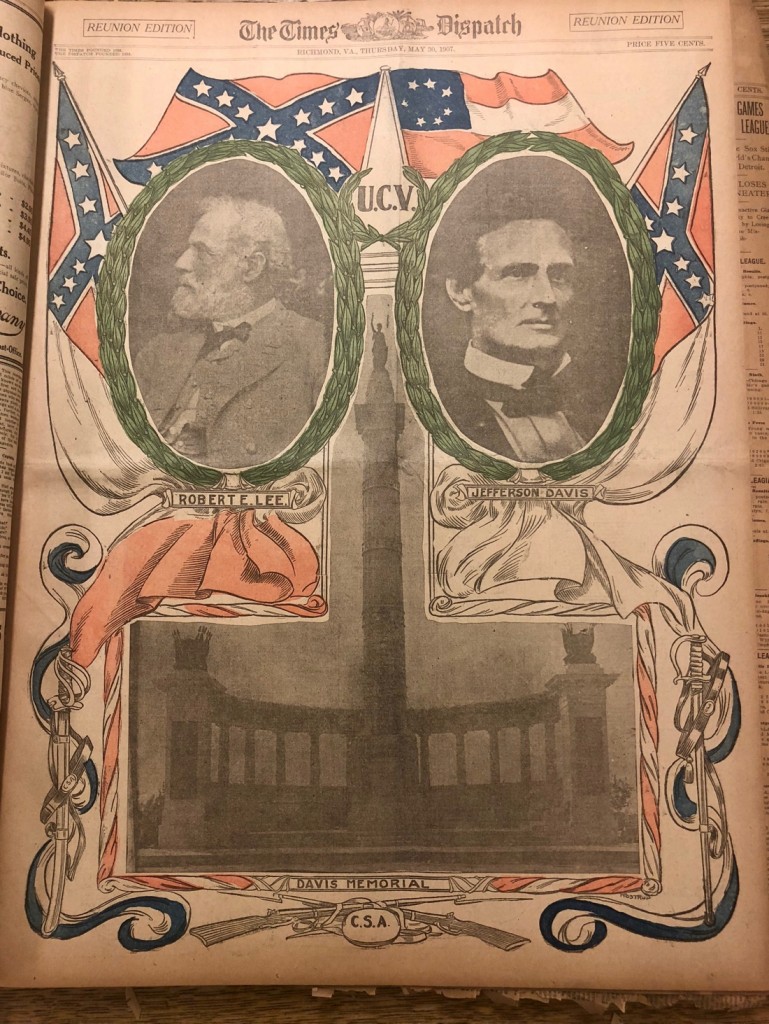 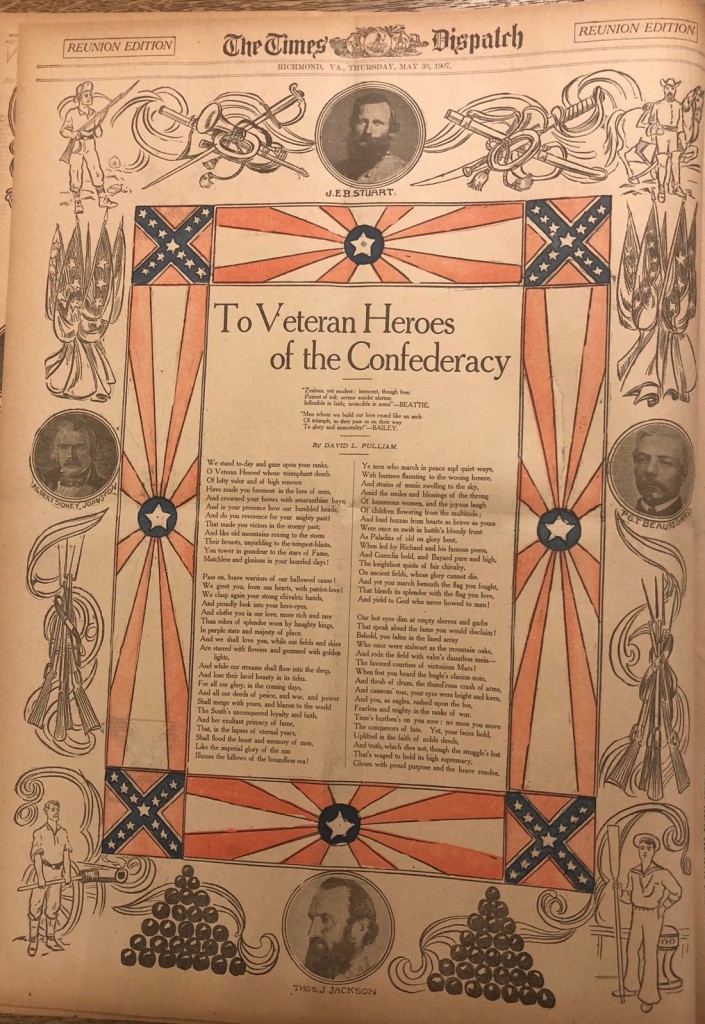 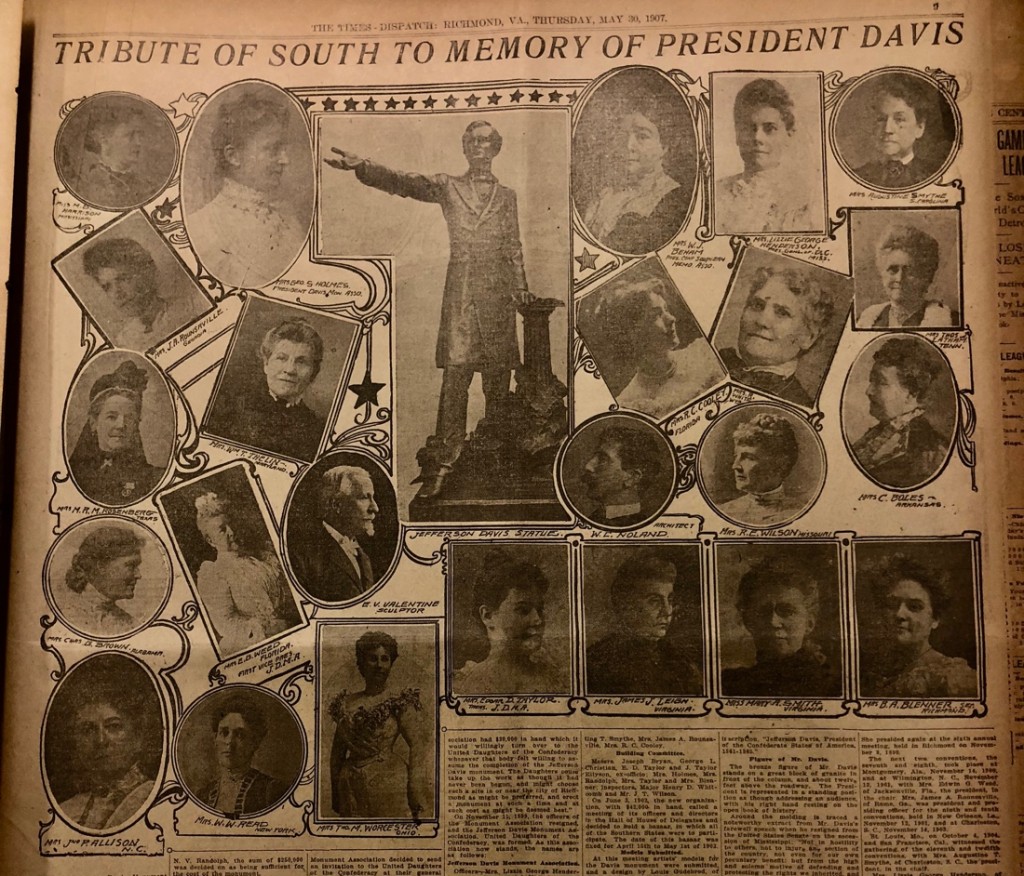 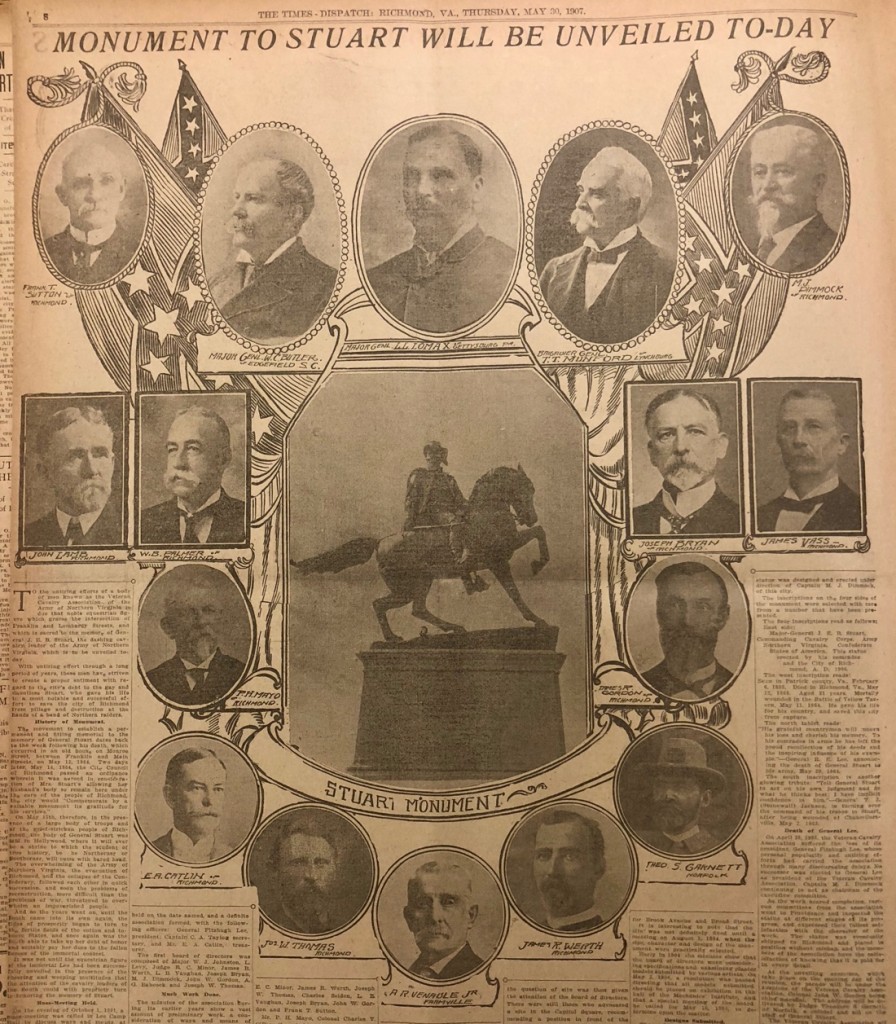 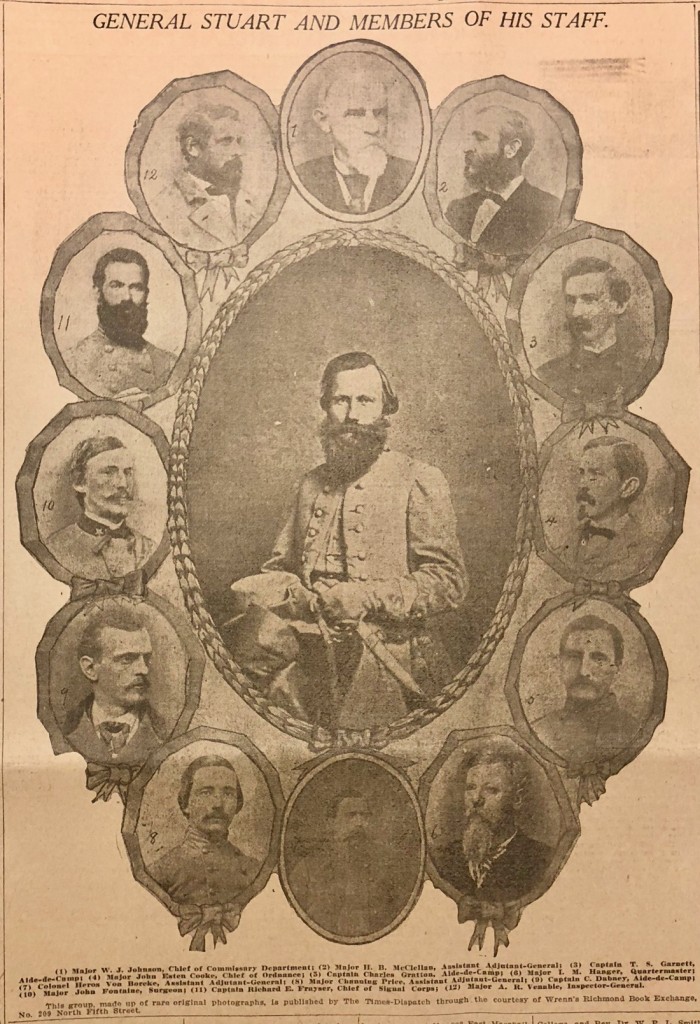 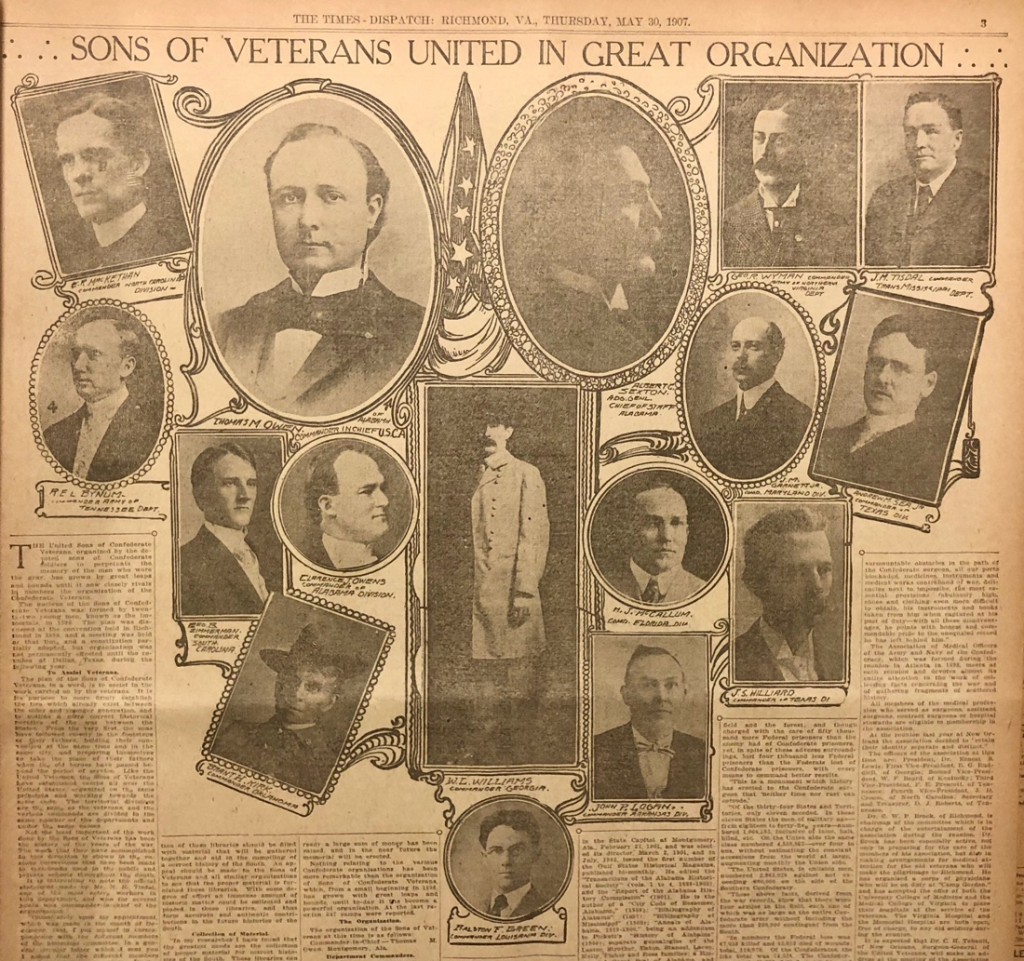 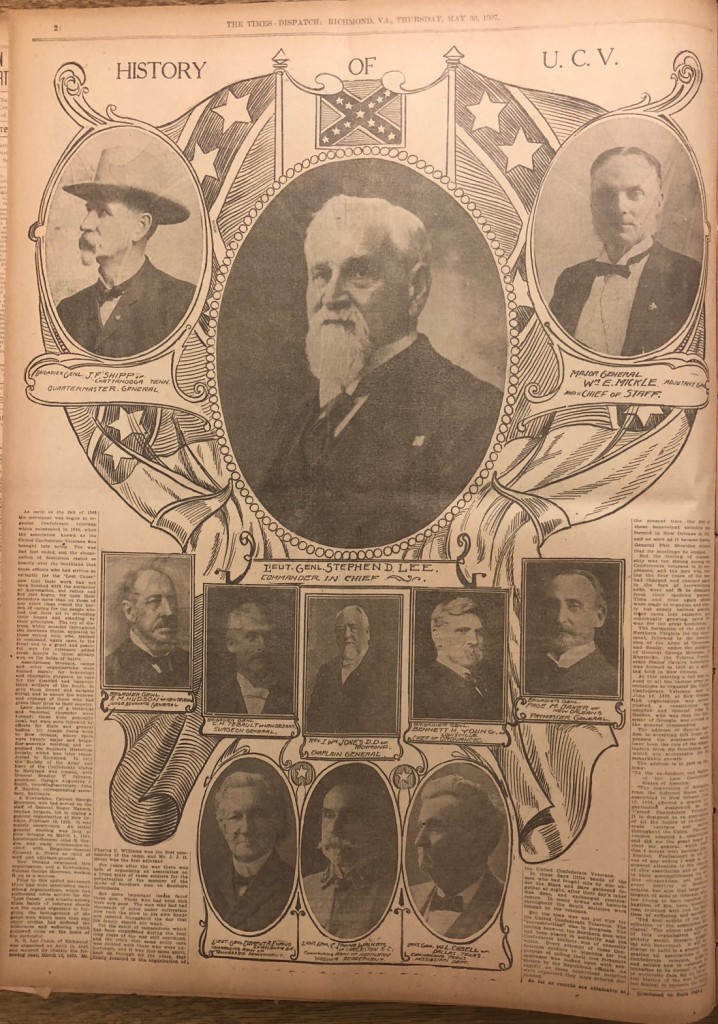 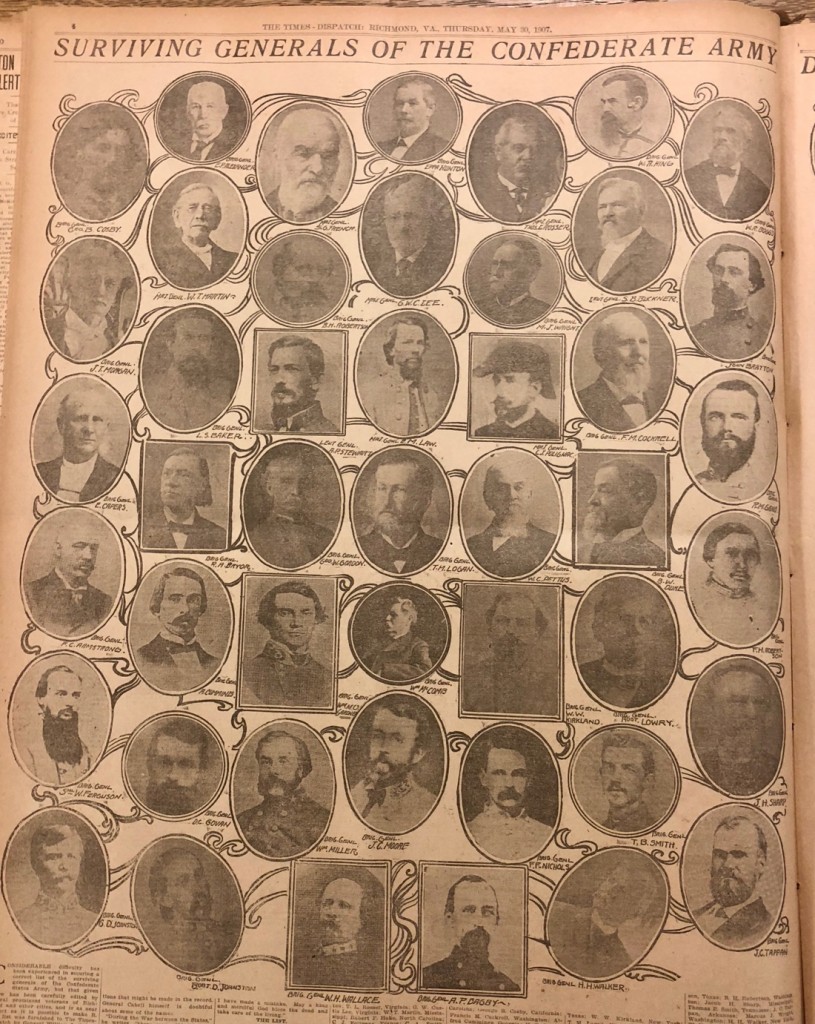 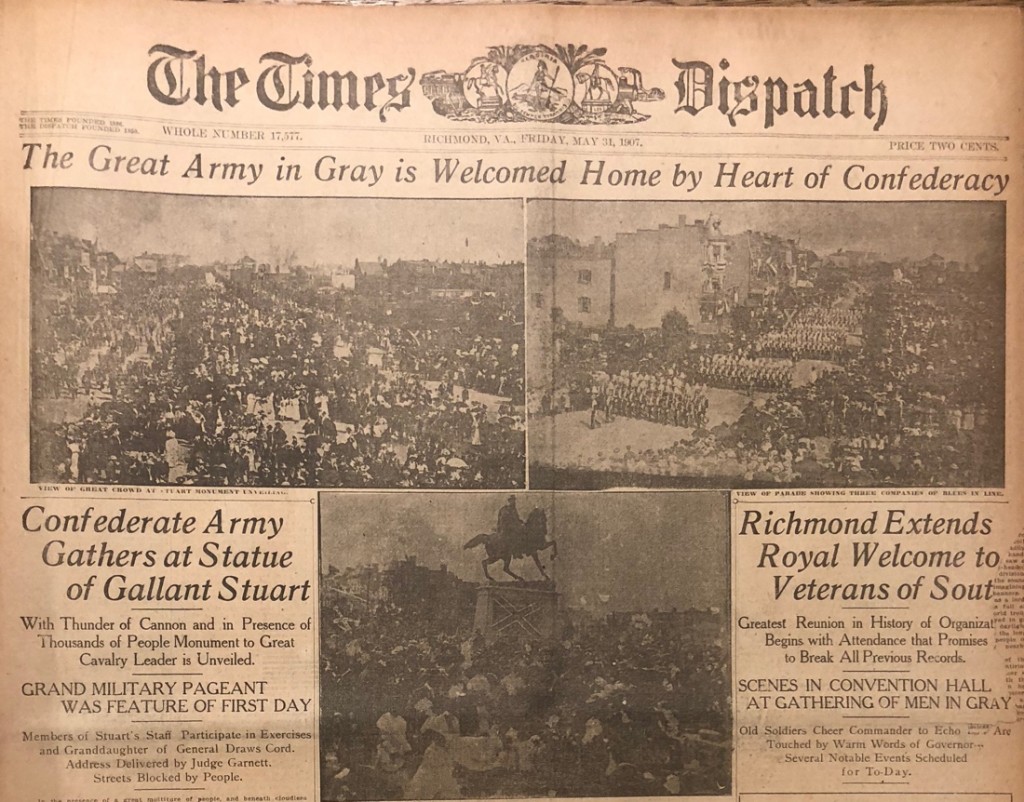 The language used in Richmond’s white papers stands in sharp contrast to the short, three sentence blurb regarding the days’ events that John Mitchell, Jr. published in the June 5 issue of The Richmond Planet. Northern papers also covered the events, in widely ranging tones. Some, like the New York Daily Tribune, covered the proceedings extensively and favorably. 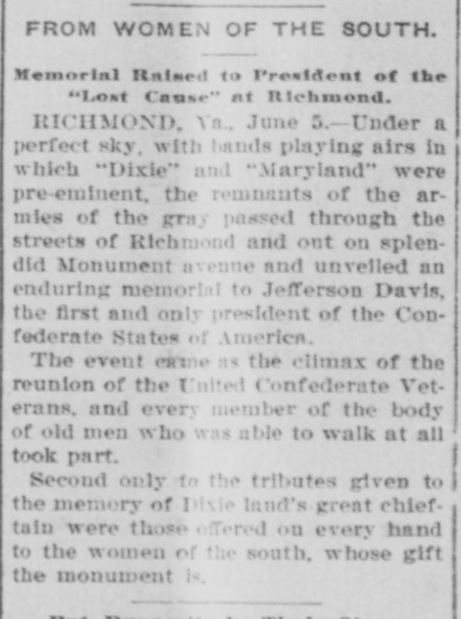 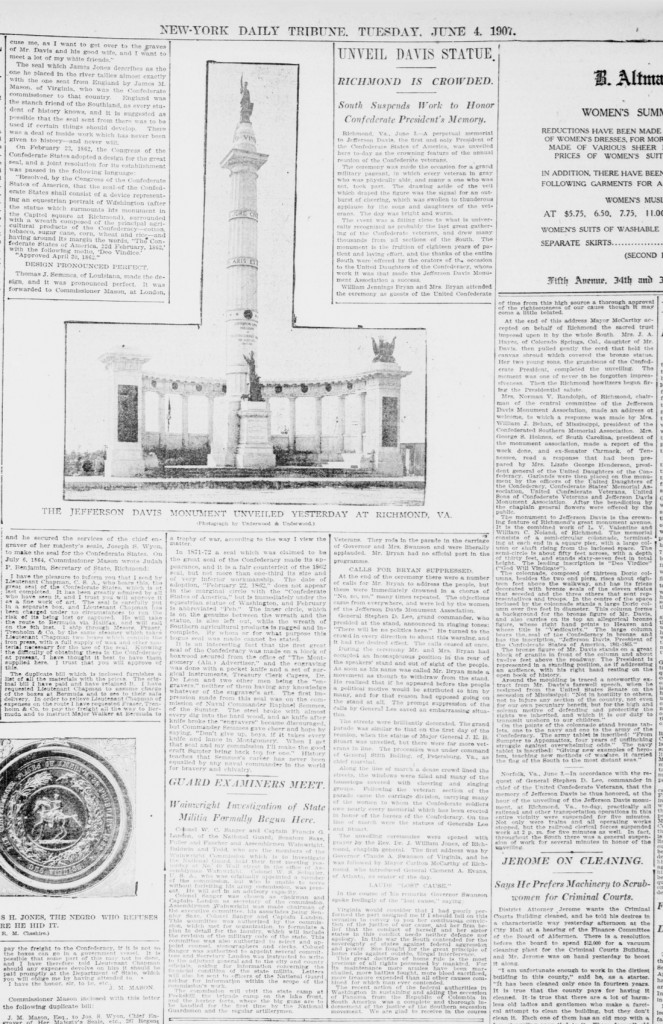 Other Northern papers offered a less glowing perspective of the week’s events. New Haven, Connecticut’s Journal Courier dryly reported that “Under dull skies with a touch of winter in the air, the Confederate reunion was devoid to-day of any striking features,” allowing that “despite the unseasonable weather conditions,” many people were in attendance.

Vermont’s Middlebury Register briefly described the event, ending the blurb by noting that “the ceremony was one of the south. No other section had any part in it.” 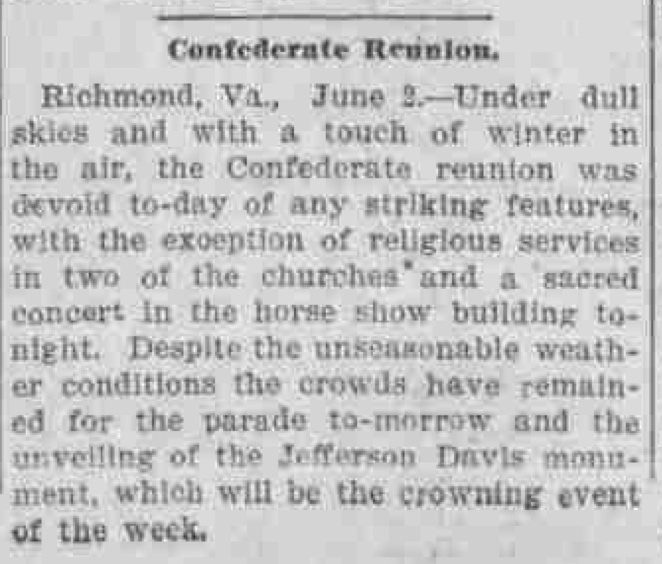 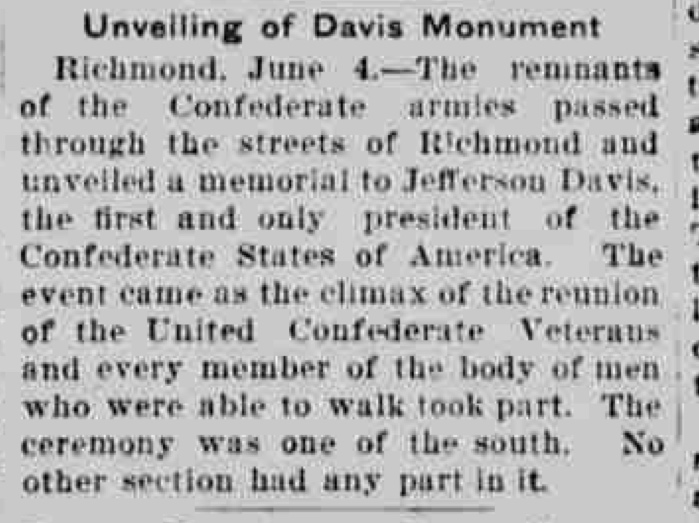 Still other Northern newspapers wrote briefly about the events in Richmond if at all, choosing to stick to the facts. While the New York Times remained short and factual about Richmond’s new monuments, its coverage of New York’s own Memorial Day celebration at Grant’s tomb included then-Governor of Massachusetts’ comment that, “If the South is to recognize and redeem her error, we should recognize that the error, so far as the great masses of the South were concerned, was conscientious and sincere.”

As the coverage in the South shows, the general belief in Richmond was not that the South had made an error by seceding from the Union. Though the South had lost, the narrative was that the Confederate army “had always been outnumbered, and never been outfought.”

Southerners believed they had a history and a way of life to protect. The Confederate reunion reinforced the notion that the South had fought the good fight for a worthy cause–the painful cost of war shrouded in fond remembrance and pageantry-filled celebration. As one reporter wrote for the Time Dispatch:

“Writers of fact and fiction delight to say and sing, ‘of the thin gray line which is slowly fading away,’ but to those privileged to watch the many commands of old soldiers which are invading this city, the gray line seems anything but thin, and the evidences of fading away are entirely lacking. It is a sight to stir the hand and warm the heart.”

An upcoming blog post in the Confederate monuments series will address how North and South came to hold such disparate and passionate views on the American Civil War.