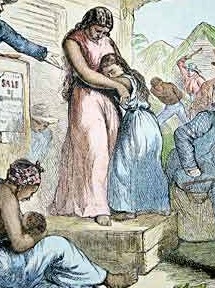 Two years ago, the Library of Virginia launched Virginia Untold: The African American Narrative, a digital collection aimed at helping researchers break through the “roadblock” that has long impeded African American genealogical and historical research. Virginia Untold, along with other digital collections already available at the Library of Virginia such as the Chancery Records Index,  Virginia Chronicle, and the Legislative Petitions Digital Collection, have brought to light the pre-Civil War experiences of African Americans once hidden in bundles of administrative, estate, property, and court records stored in courthouses, state agencies, attics, basements, and libraries. One example is the narrative of an African American family who resided in Powhatan County in the mid-19th century.

In 1833, John Cullins’s last will and testament was recorded in Powhatan County court. One of the terms listed in the will was the emancipation of a family of enslaved people: a mother, Nancy, and her five daughters, Jane, Sally, Ann, Judith, and America. However, their emancipation was not immediate. Cullins’s will stipulated that the family would remain enslaved until the deaths of John’s two daughters, Polly and Henley. Following their deaths a decade later, Nancy and her daughters finally gained their long awaited freed … except for Jane, who died before receiving her emancipation.

Once emancipated, Nancy and her daughters acquired the surname of their former owner, Cullins. They registered as free persons at the Powhatan County courthouse, as required by Virginia law. One of Nancy’s daughters, Judith, married a free African American man named William Brooks. Despite their newfound freedom, Nancy and her daughters found themselves unable to enjoy it fully. The reason? One of their family members, Martha, remained enslaved. Jane, their deceased daughter and sibling, was Martha’s mother. Henley Cullins sold Martha to Creed Taylor shortly before Jane’s death. Nancy and her daughters believed that Martha’s continued enslavement violated the intent of John Cullins’ will.

Nancy and her daughters had a choice to make. Do nothing and continue to live peaceably and free in Powhatan County or put their freedom in jeopardy by pursuing legal action against a local slave owner in an attempt to win Martha’s freedom. With the assistance of a local lawyer named William C. Scott, Nancy and her daughters filed a chancery suit in February 1850 against Creed Taylor and the administrator of the John Cullins estate—Nancy Cullins &c v. Administrator of John Cullins &c, 1856-010. They argued that if their sister Jane had been living when John Cullins’s daughters died, she and all her children would have been emancipated by the terms of Cullins’s will. It was unfair, they argued, for Martha to remain enslaved simply because her mother died before receiving her freedom. Nancy and her sisters pleaded with the court to address this matter quickly. They learned that Creed Taylor planned to take Martha to Richmond to sell her at auction. If he did so, they would never see Martha again. “This has given your oratrisses (sic) great pain … because she is their flesh & blood … & they are bound to her by the strongest of affections.”

Six months after filing their chancery suit, Sally, Ann, America, and Judith received a summons to appear before the Powhatan County court. The sheriff was unable to deliver the summons to Judith Brooks because she was not a resident of Powhatan County. A grand jury had issued an indictment against them for remaining in Virginia for more than one year after their emancipation, contrary to the laws of the Commonwealth. If the court found the Cullins sisters guilty, they would forfeit their freedom and be sold back into slavery. The indictment included the names of the grand jury members who issued it. One of jurors listed was Creed Taylor.
Undoubtedly, this was an overt attempt by Taylor to terrorize Nancy and her daughters into drop the chancery suit. They did not. Ann Cullins made a legal effort to avoid prosecution by filing a petition in Powhatan County court in November 1852 to remain in the Commonwealth. The local magistrates heard her petition two months later and rejected it. Despite this rebuff, Ann and her family continued the chancery suit against Taylor.

In August 1853, a jury composed of white males, some of whom were probably slave owners, delivered their verdict against three former slaves: Ann, Sally, and America Cullins. Given the scenario, the outcome was predictable. “We of the Jury find the defendant(s) guilty … Therefore it is considered by the Court that the defendant(s) forfeit (their) freedom, and that (they) be sold as a slave; and the Sheriff of this county … is directed to carry this judgement into execution.” Proceeds from the sale of the Cullins sisters went to the state treasury.

The sisters’ chancery cause continued even after their conviction. Under the guidance of their attorney William C. Scott, the cause made its way to the Court of Appeals in Richmond in 1855. The appellate court ruled in favor of Creed Taylor. Martha remained enslaved. The next year, the county court ordered that the appellate court’s decision be recorded in the order book and dismissed the Cullins sisters’ suit. As a final act of indignity, the court order the Cullins sisters to pay Creed Taylor’s court costs. 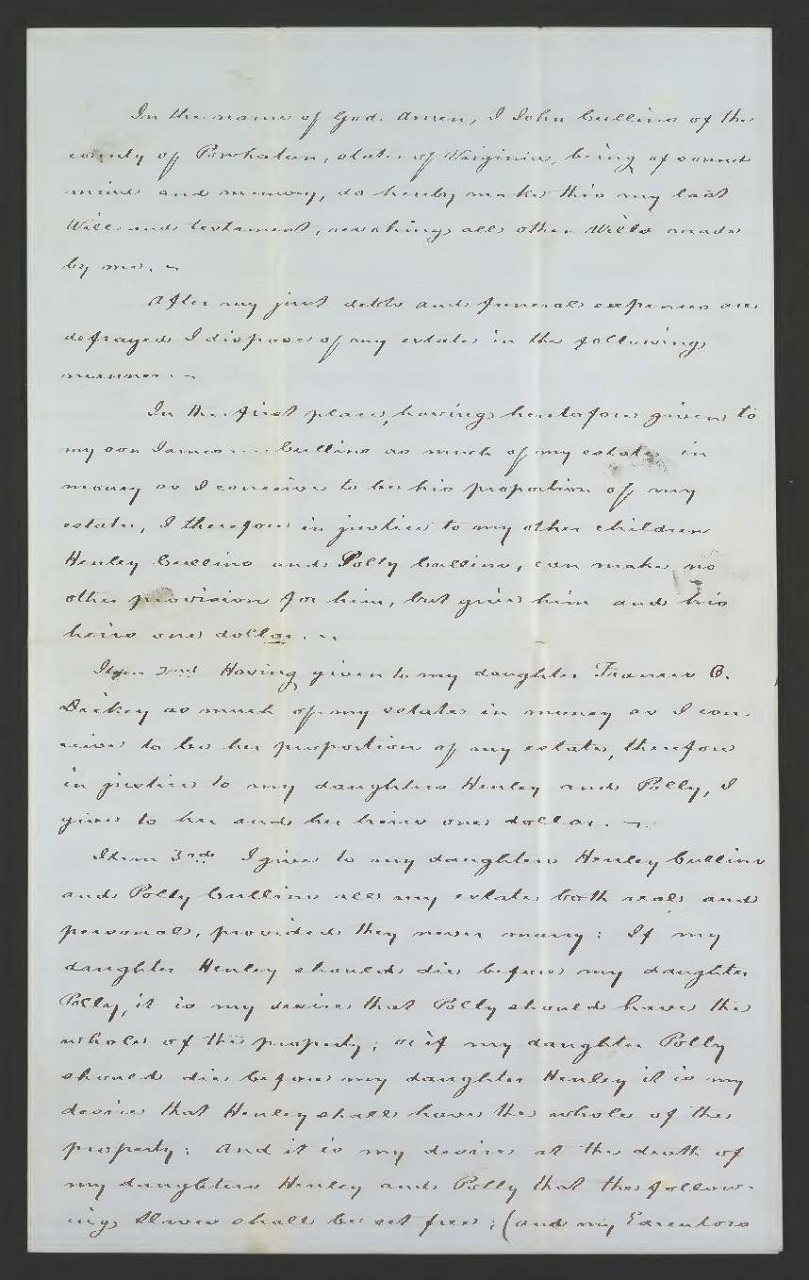 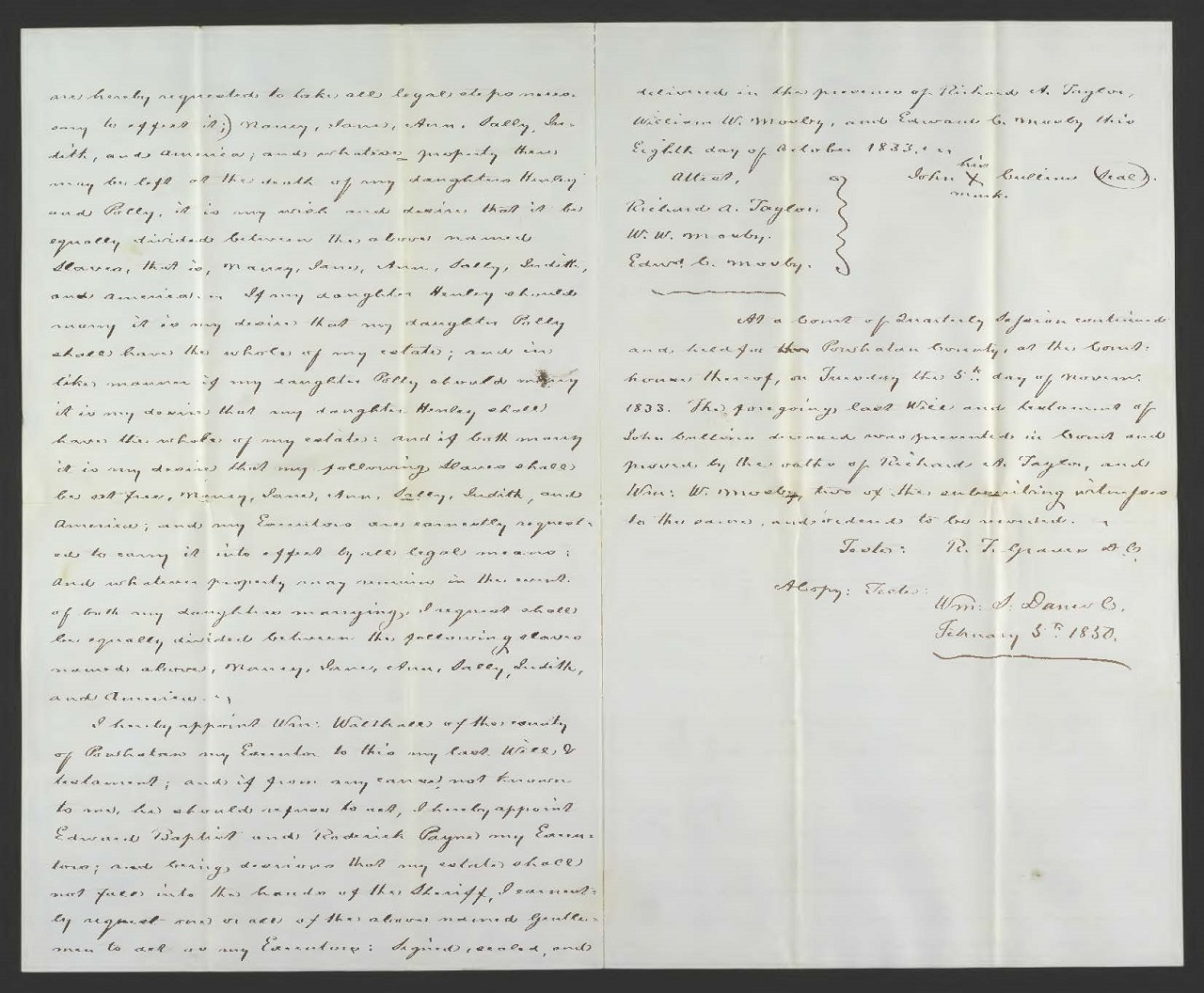 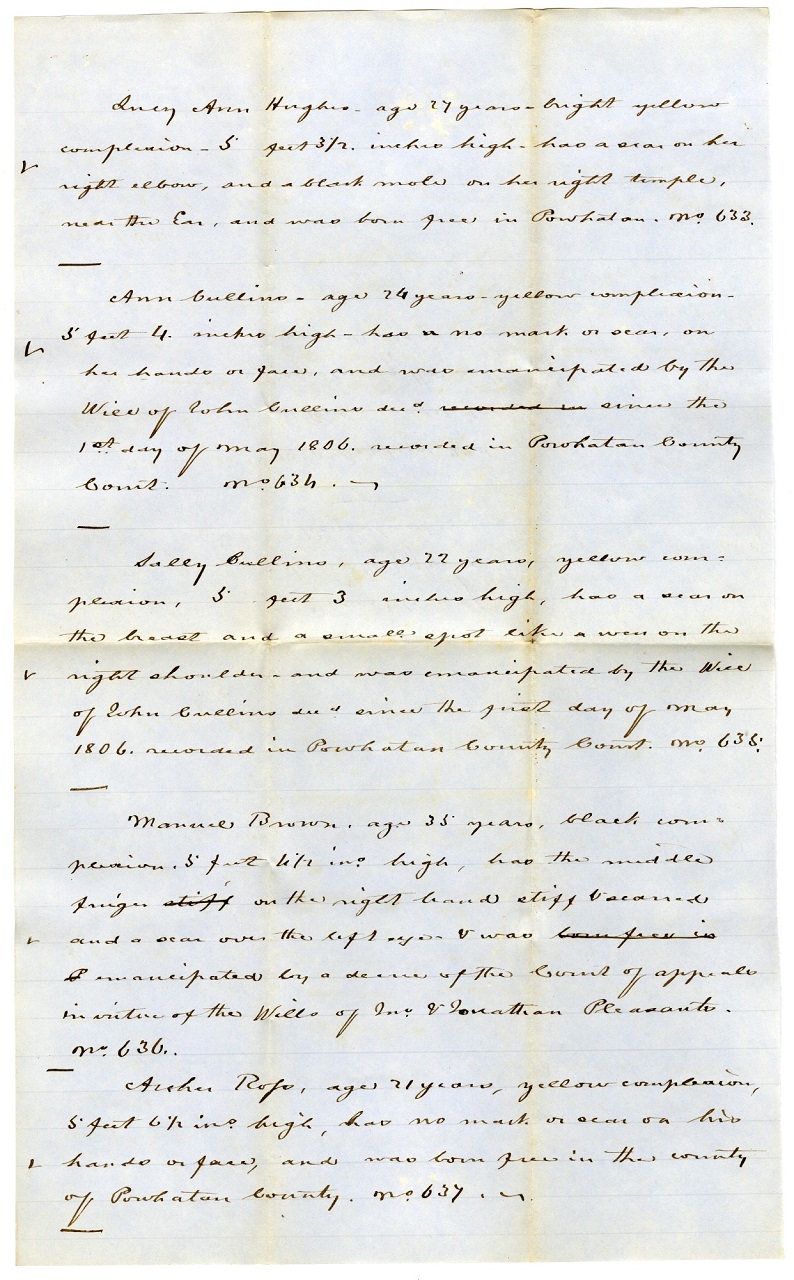 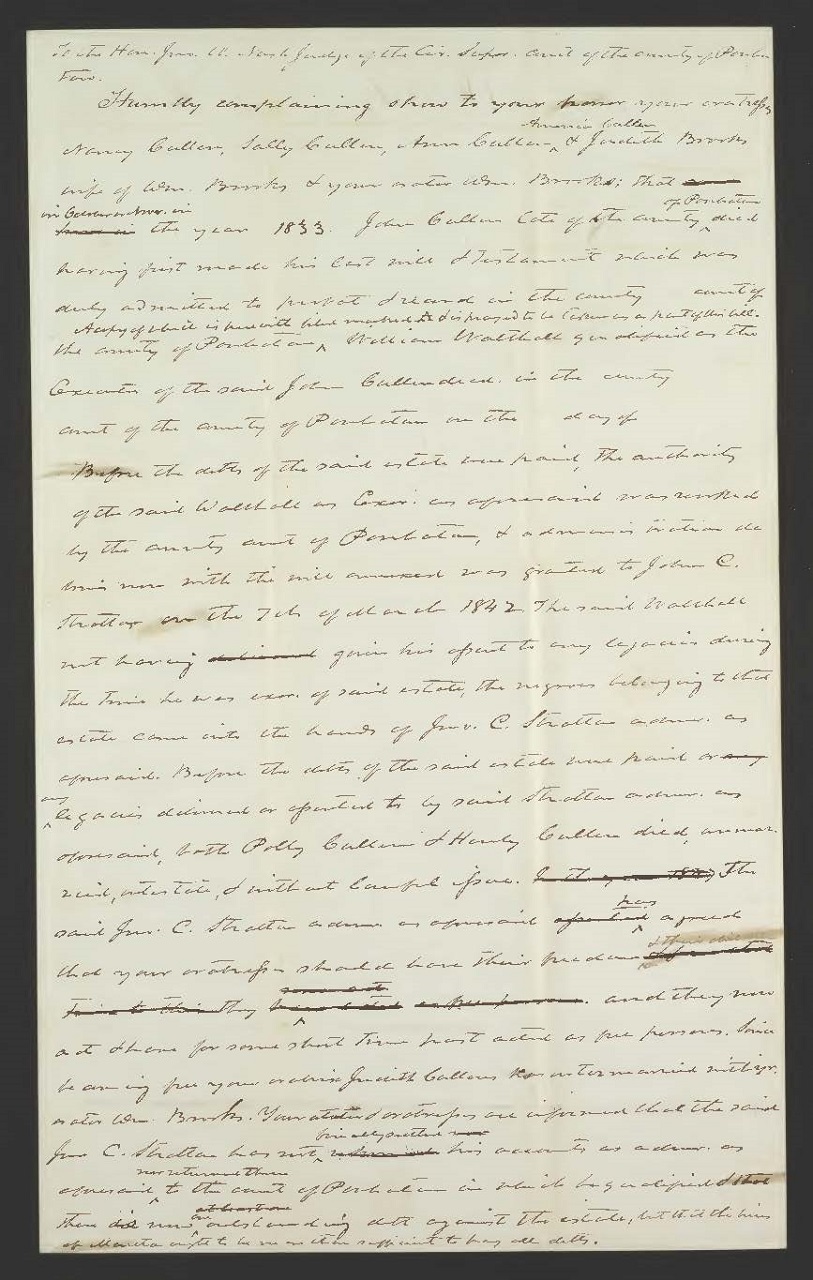 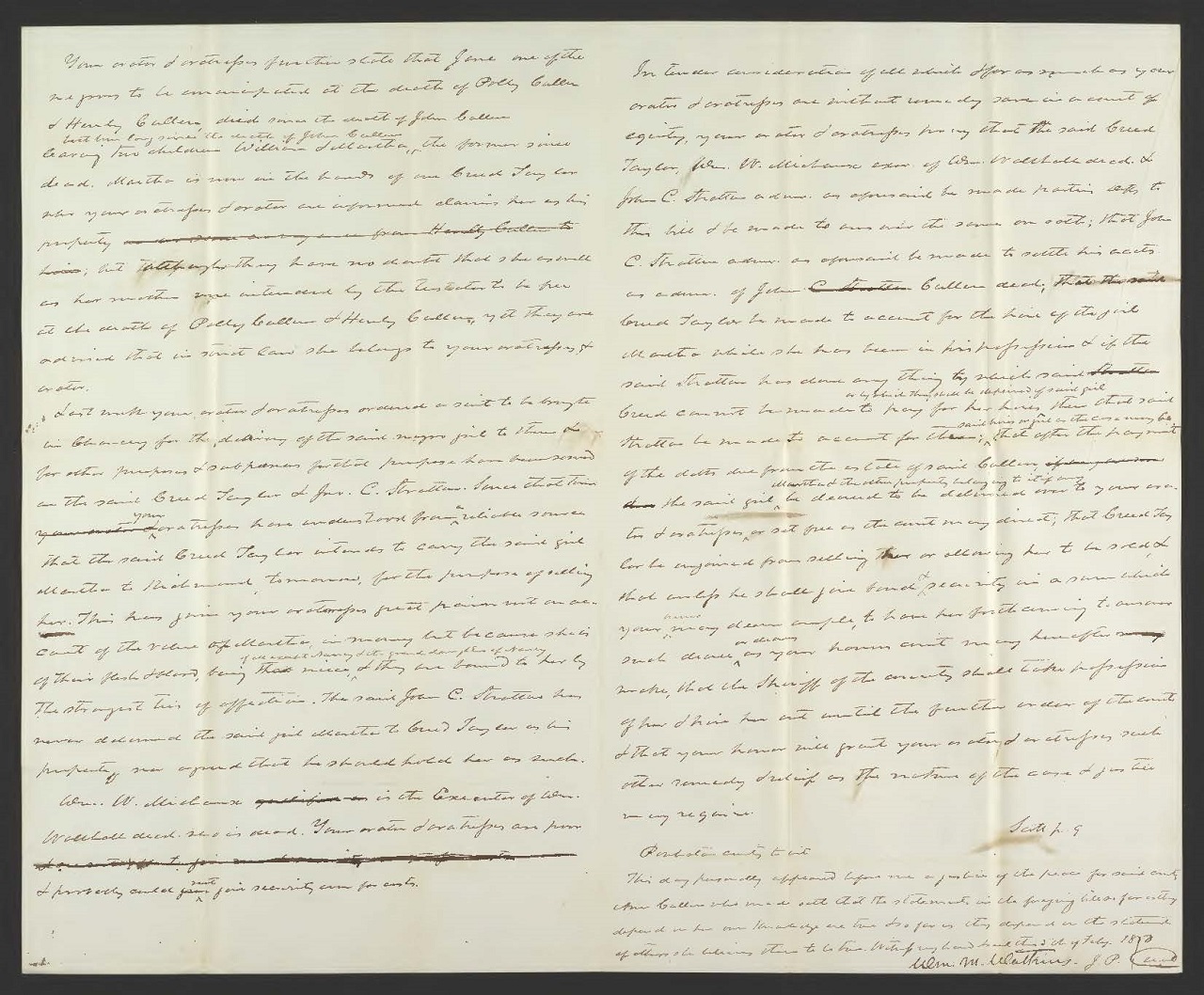 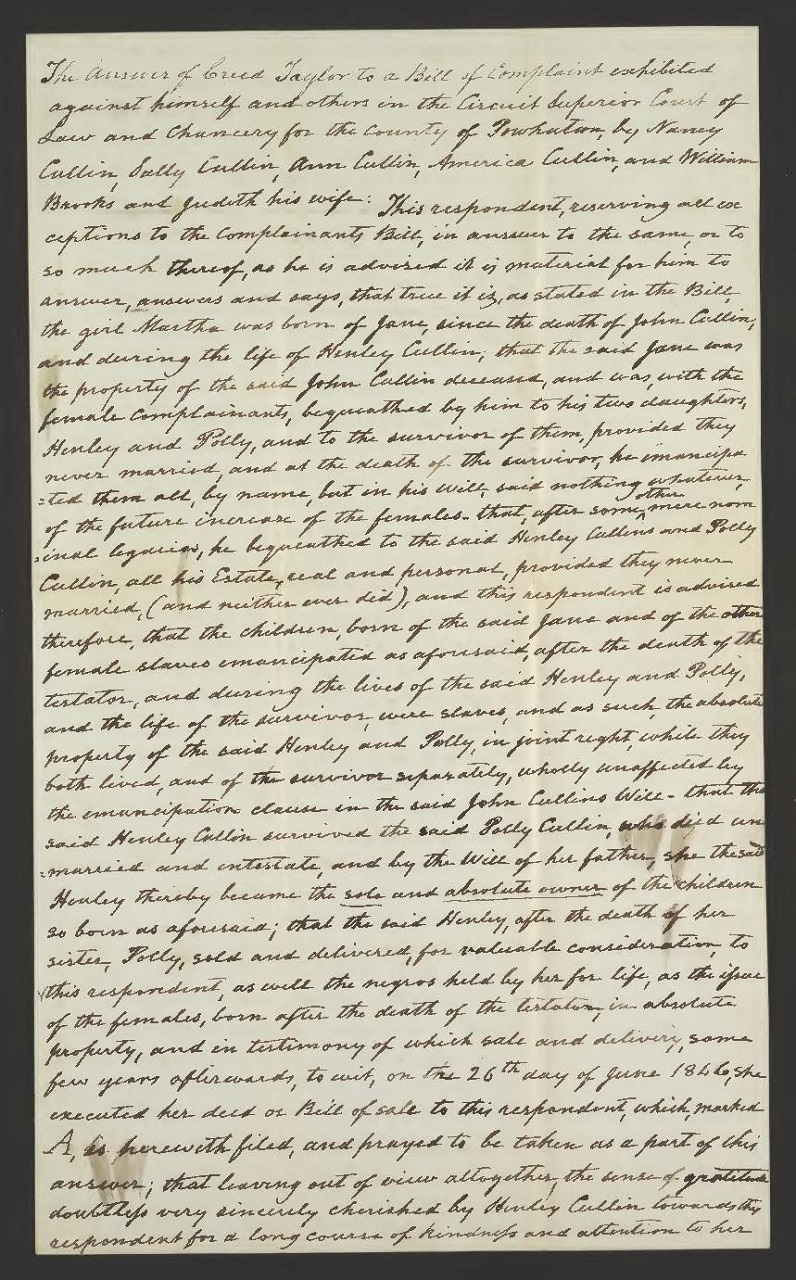 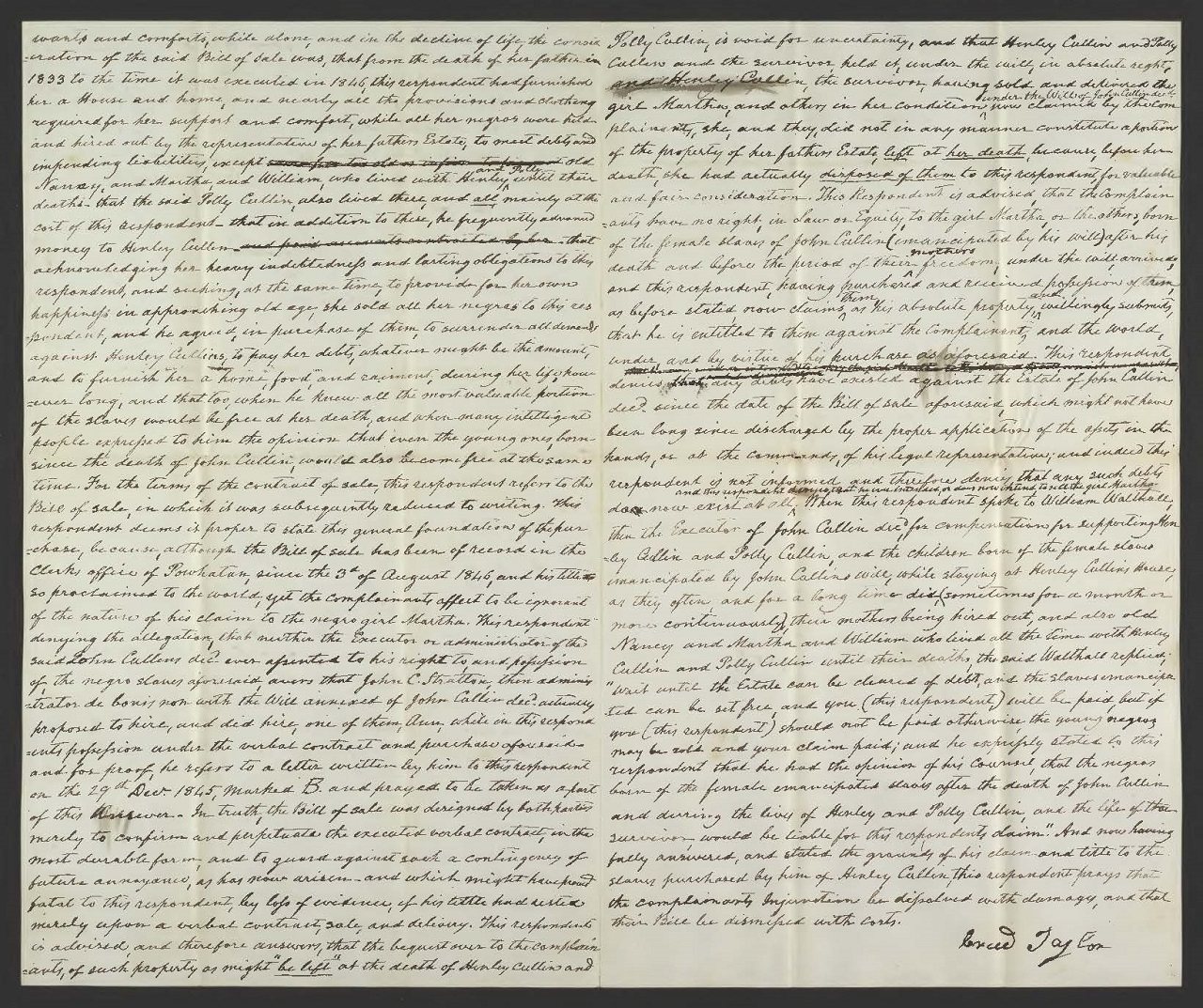 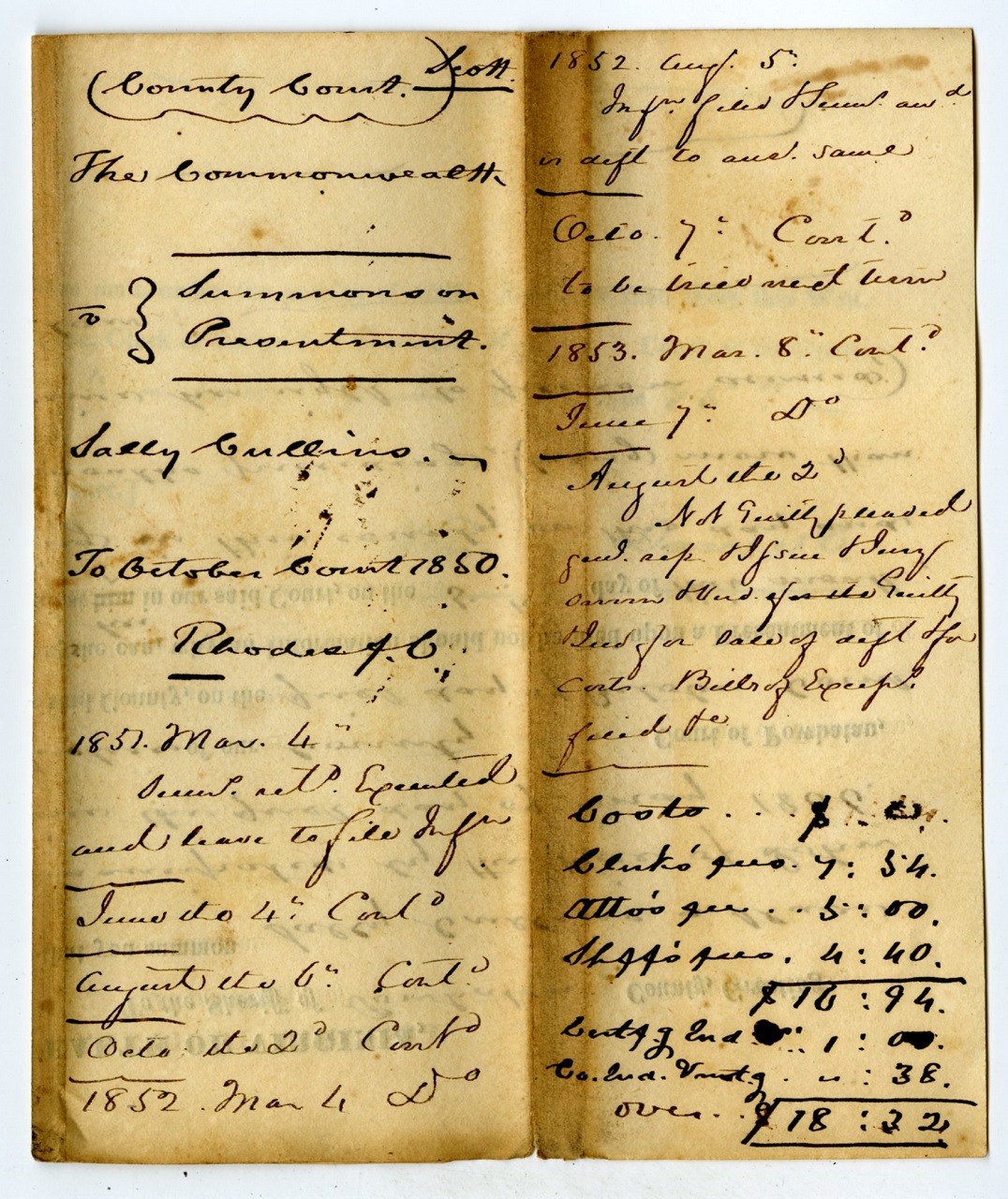 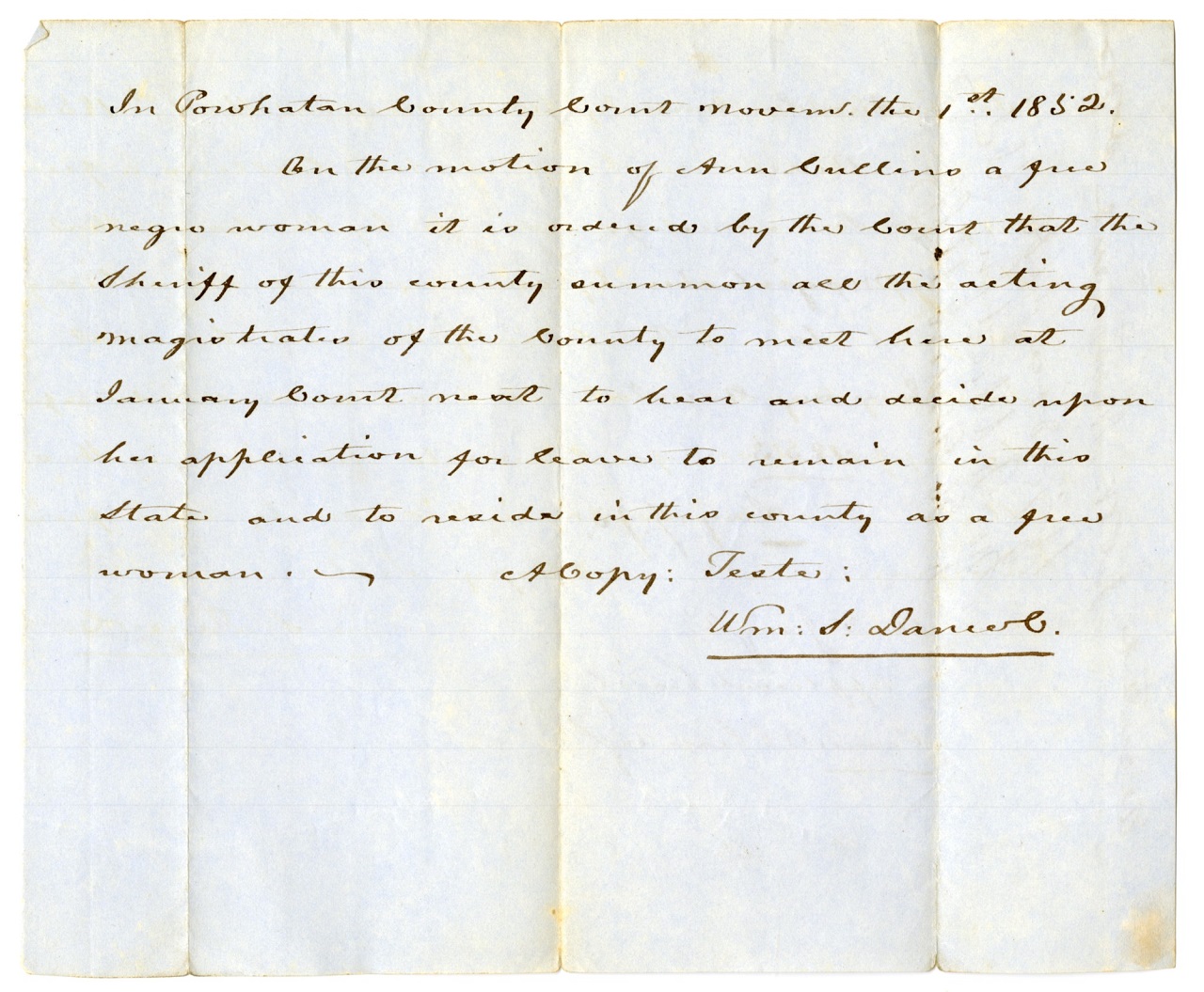 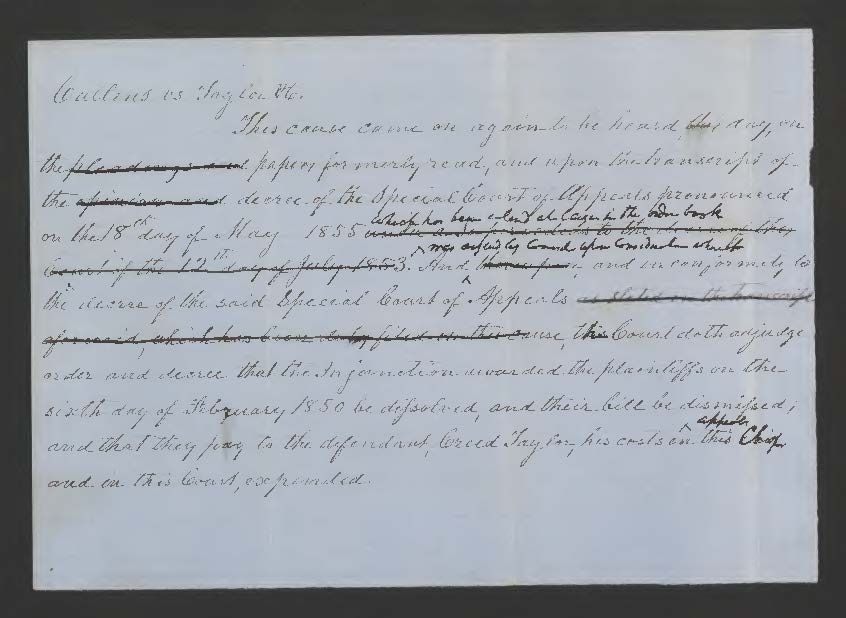 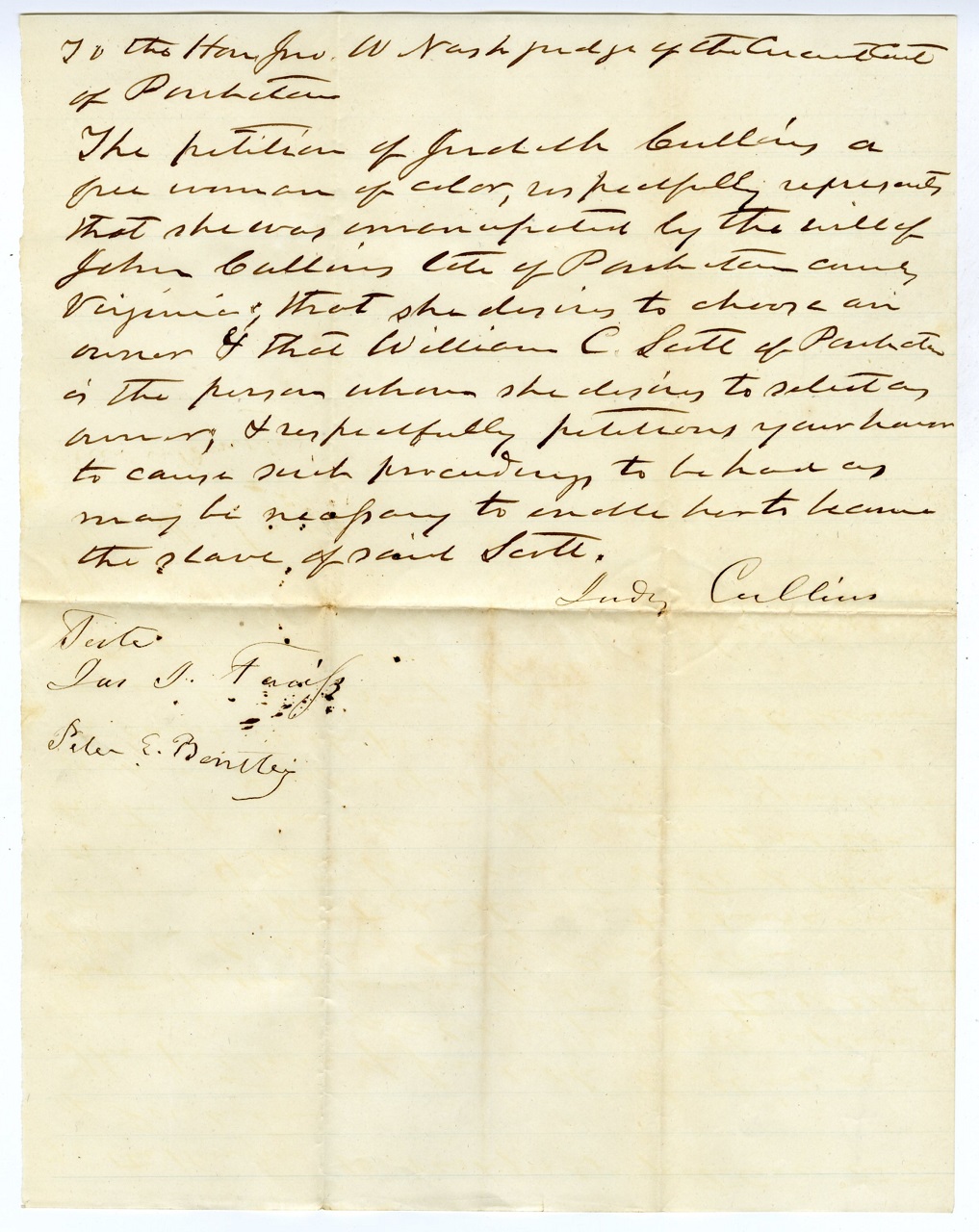 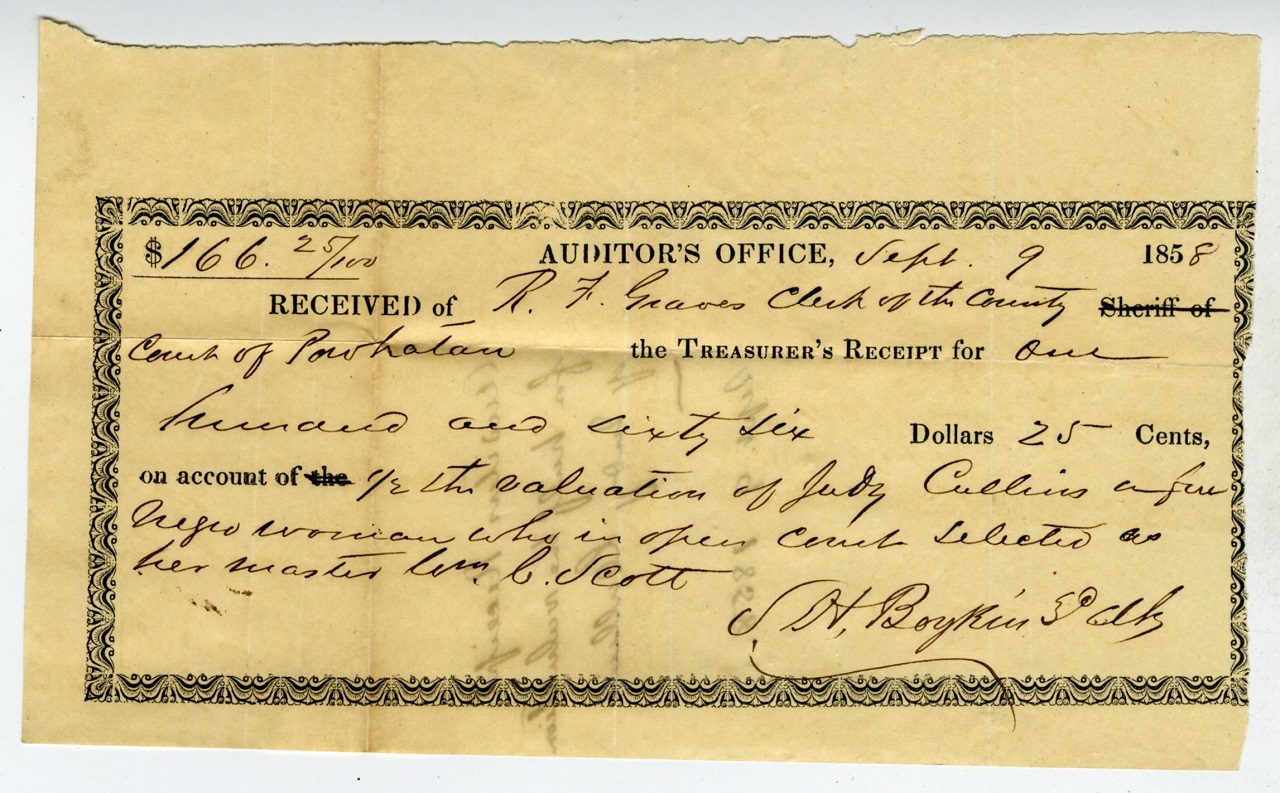 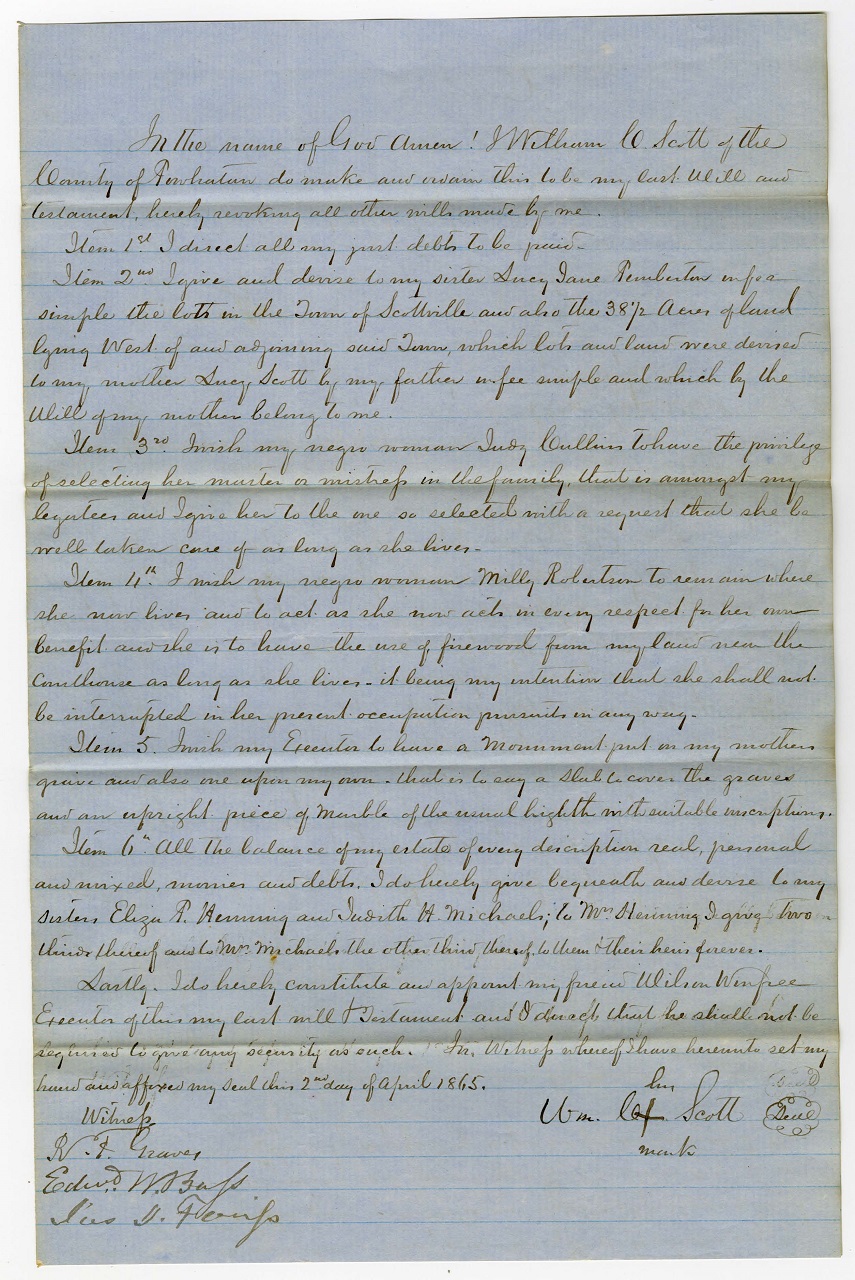 In April 1858, the remaining Cullins sister, Judith Brooks, made a decision that many would consider unthinkable. She filed a petition in Powhatan County court, under her maiden name Cullins, requesting to be enslaved to William C. Scott, the Cullins’ attorney in the chancery suit against Creed Taylor. The court approved her petition. Almost a decade after her emancipation, Judith was once again enslaved. As part of the re-enslavement process, Judith was appraised to determine her monetary value. Her value was determined to be $166.25 (or about $5,000 in 2017).

Why would Judith forfeit her freedom? Perhaps she wanted to live near her enslaved sisters and niece. That was enough justification for many free African Americans who filed similar petitions. They preferred to be with family and friends in their home community as an enslaved person rather than live in freedom in a “strange land,” as some petitioners referred to the Free states.  It is also possible that, knowing what happened to her sisters, Judith chose to enslave herself to someone she knew rather than have the choice of owner made for her.

The Cullins family narrative began with a will and ends with a will. In researching this story, I examined the original Powhatan County wills stored at the Library of Virginia and found the will of William C. Scott. In it, Scott permitted Judith to select her next owner from one of his family members. He wrote his will on 2 April 1865. The next day, the Confederate capital of Richmond fell to Union forces.

The processing of local court records found in Virginia Untold and the scanning and indexing of the chancery causes found in the Chancery Records Index were made possible through the innovative Circuit Court Records Preservation Program (CCRP). The CCRP is a cooperative program between the Library of Virginia and the Virginia Court Clerks Association (VCCA), which seeks to preserve the historic records found in Virginia’s circuit courts. The scanning, indexing, and transcription of the records found on Virginia Untold were funded by Dominion Resources and the Library Services and Technology Act (LSTA) administered by the Institute of Museum and Library Services (IMLS).