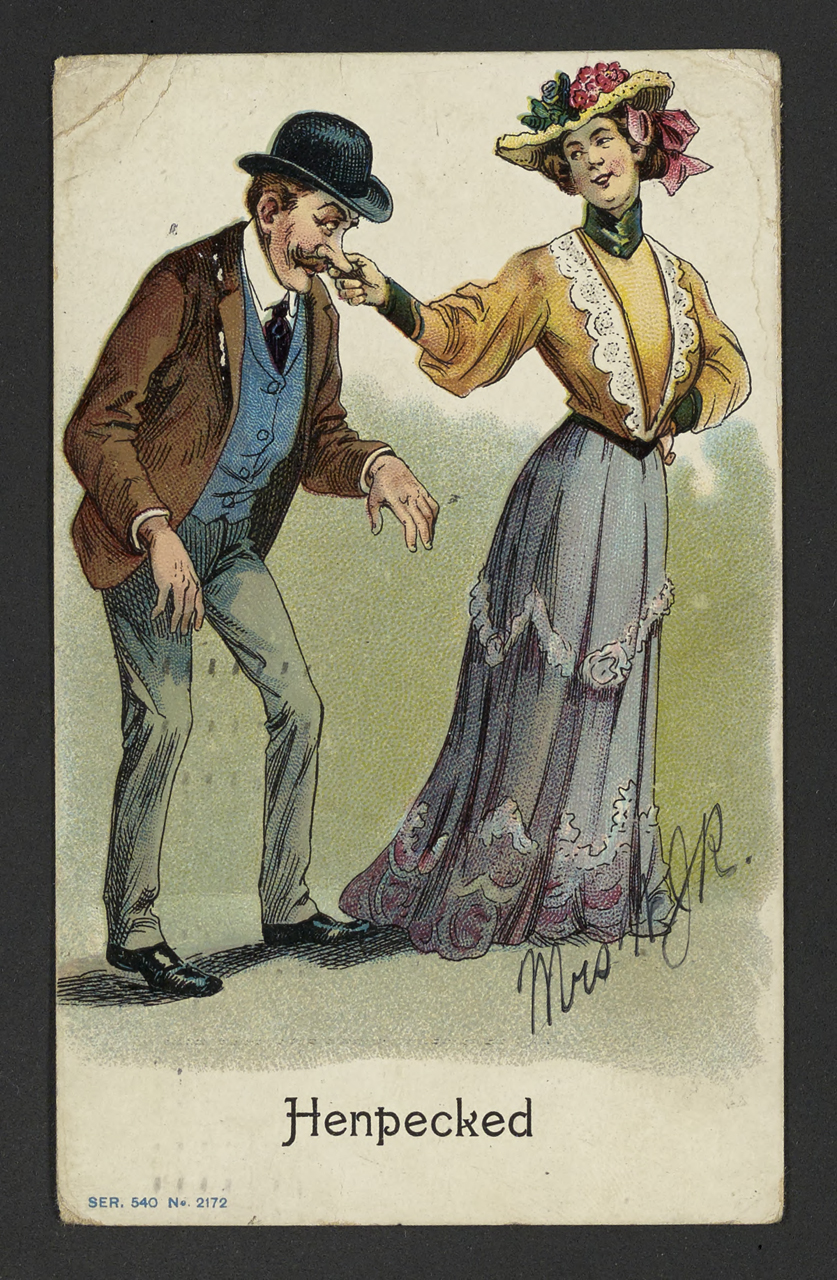 Happy Valentine’s Day from Out of the Box! Although today is meant to be a celebration of love and romance, not all valentine cards have a happy back-story. This set of cards served as evidence in the 1911 divorce case between Iva Robinson Titzel and John A. Titzel, Jr., in Norfolk County (now Chesapeake). The couple met and married in Norfolk County in 1909. They moved to Brooklyn shortly thereafter and to Boston in February 1910. Iva returned to Norfolk County with her mother in April 1910, after a stay in the hospital for surgery for blood poisoning in her foot. John returned to Norfolk County at the end of September that year, and they made a brief attempt at reconciliation. By January 1911, however, Iva had decided she “could no longer live with him in safety” and by February had asked for a divorce.

Apart from those few facts, the couple disagreed on everything else that contributed to the disintegration of their brief marriage. John, a Spanish American War veteran and petty officer in the U. S. Navy, maintained that the marriage was a happy one, and that he had to no reason “to anticipate any trouble whatsoever between himself and wife.” He claimed that Iva’s mother persuaded her to leave Boston for Norfolk County, and that she “so poisoned the mind of the complainant against your respondent that she told him she never cared to see him again, nor would she ever again live with him.” He further said that the two planned to set up their own home, but that external circumstances kept forcing them to put off their plan. Moreover, he specifically denied bringing drunk sailors to Iva’s father’s house, or accusing Iva of adultery. He said that he was “willing and anxious to live with his wife providing she will so conduct herself as not to excite his suspicions and the comments of their friends.”

Iva, who had been previously married to John Hobbs and had a young daughter, Erma, remembered the marriage very differently. She accused John Titzel of being “drunk the whole time” she was sick, of threatening to kill her on several occasions, of striking her on numerous instances with his fist, and of forcing her to pawn her wedding ring to pay for her medical bills in Boston. She said that she had written asking her mother to visit, and that she had to beg her mother to bring her home to Norfolk County. Iva’s mother and sister, as well as an African American woman named Mary High who worked for Iva’s father, all served as witnesses for Iva. They testified that they had heard John Titzel insult, curse, and threaten Iva, and seen him strike her. Mary High claimed she “heard him call her “Damn Fool” and said she wasn’t any lady.” 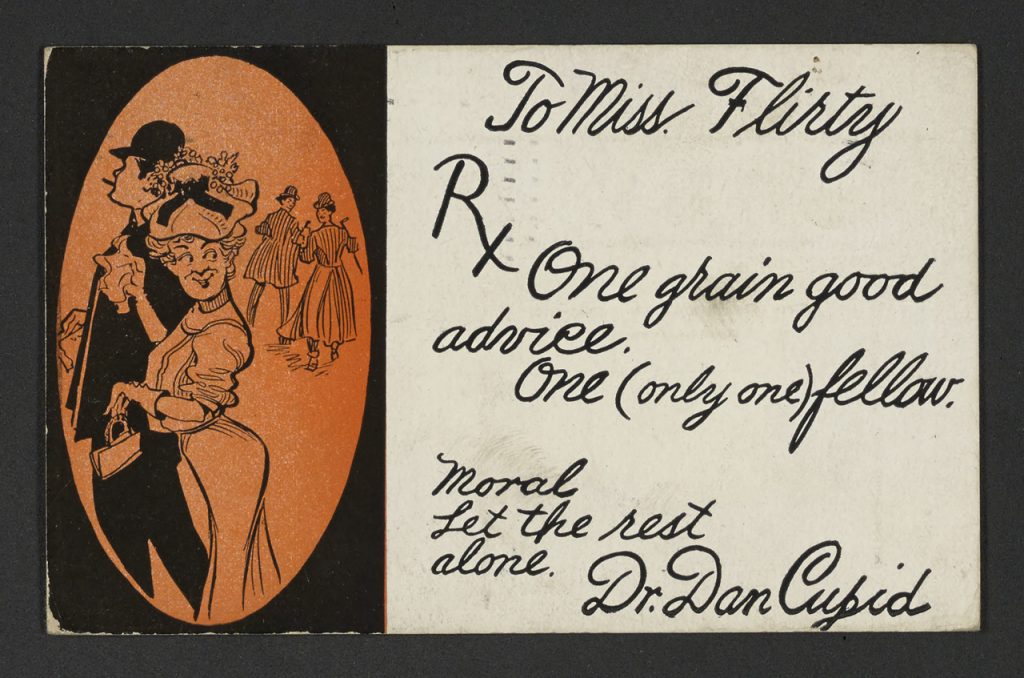 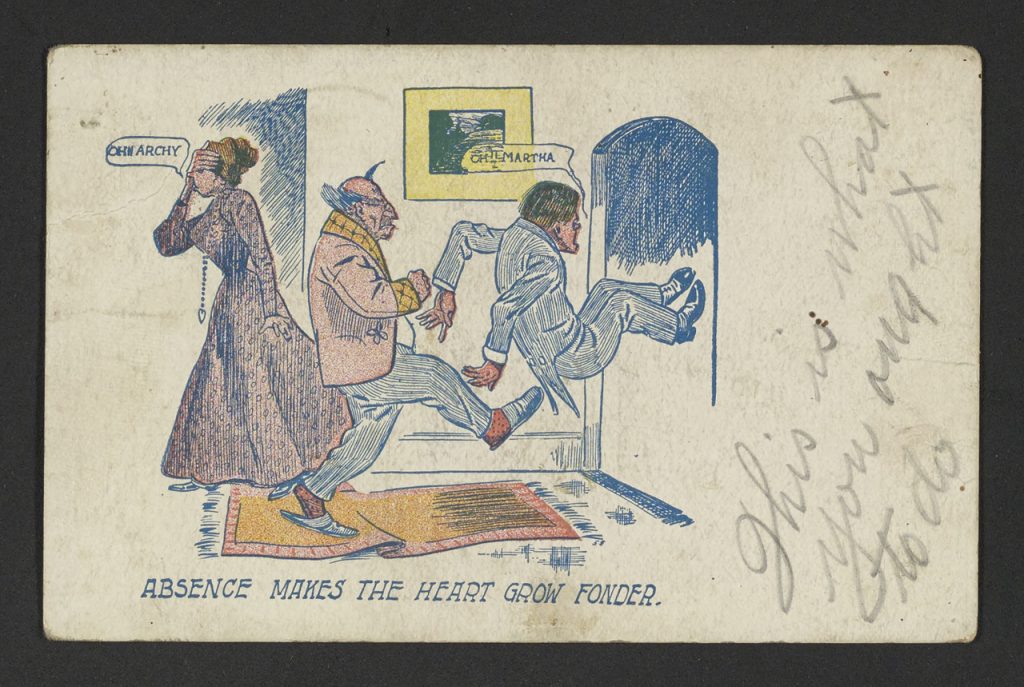 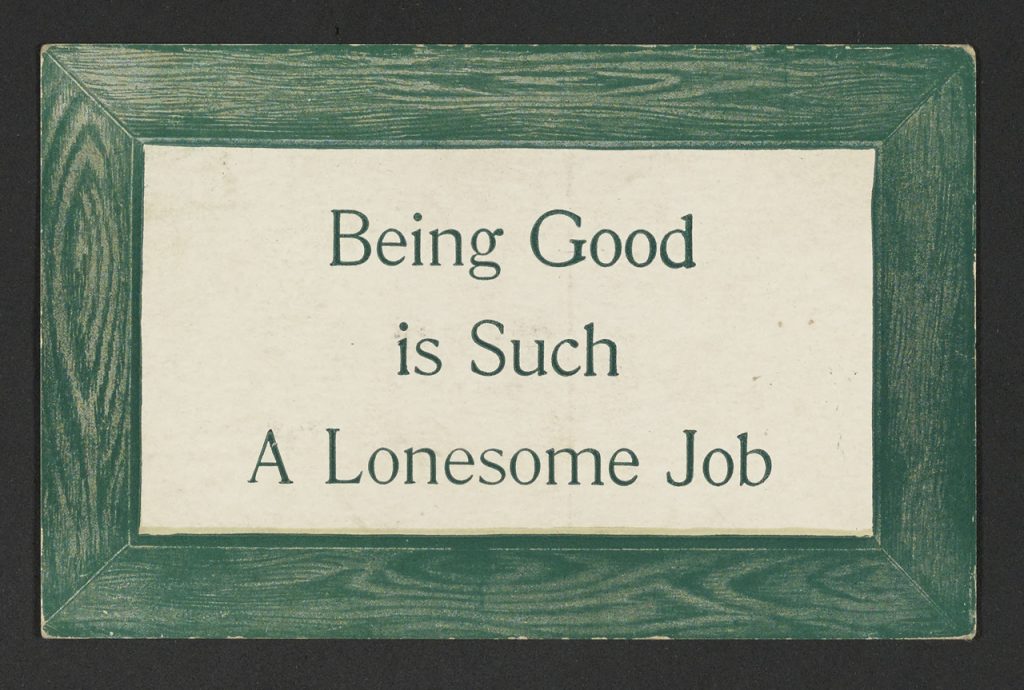 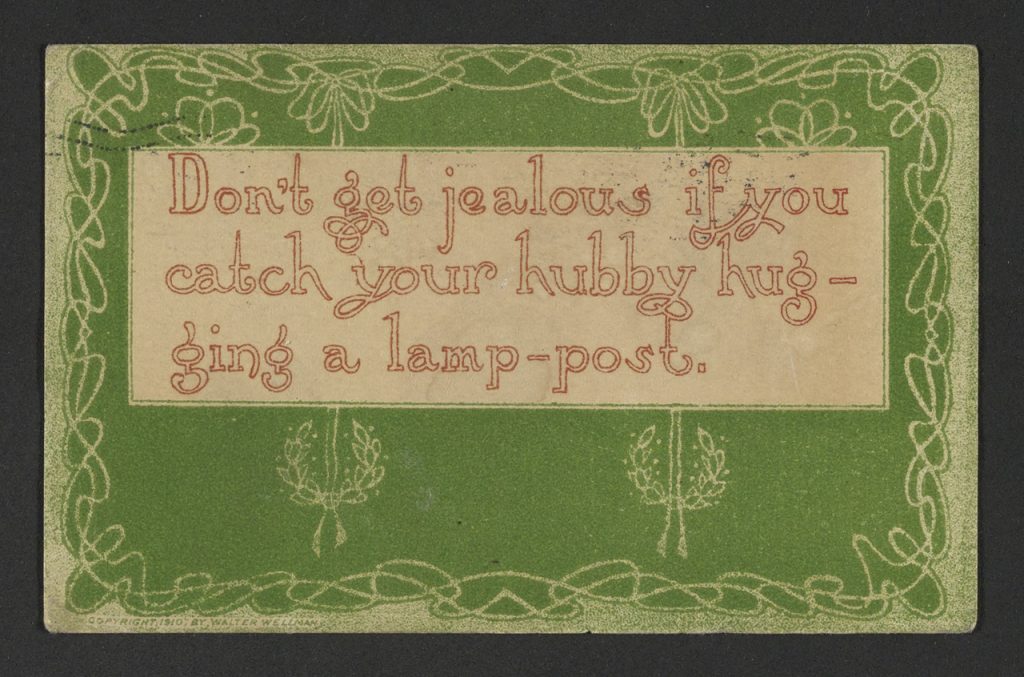 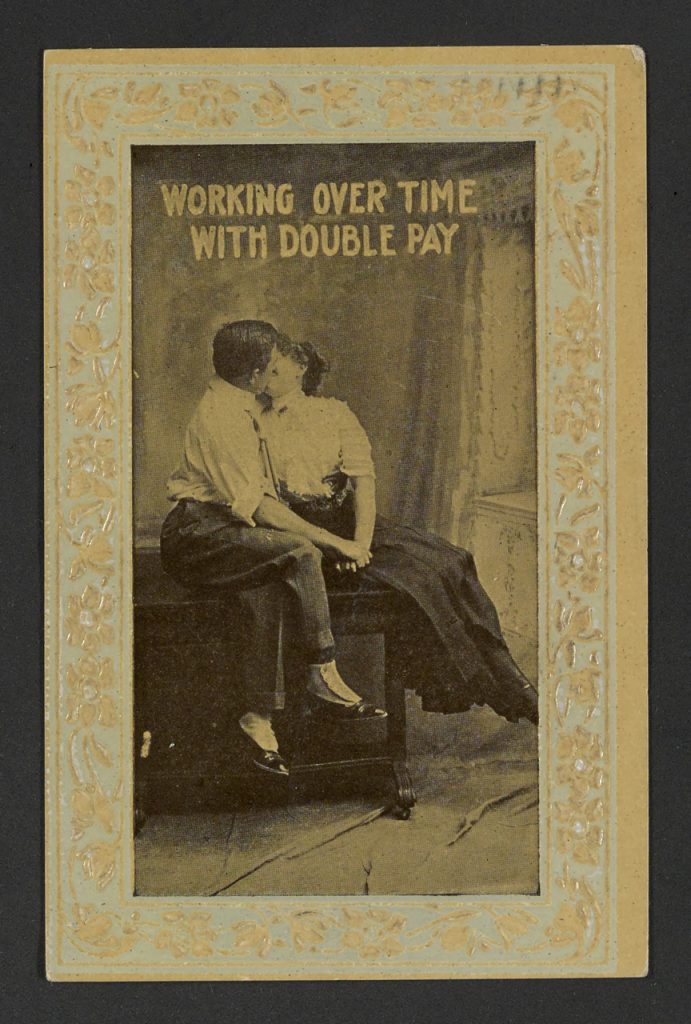 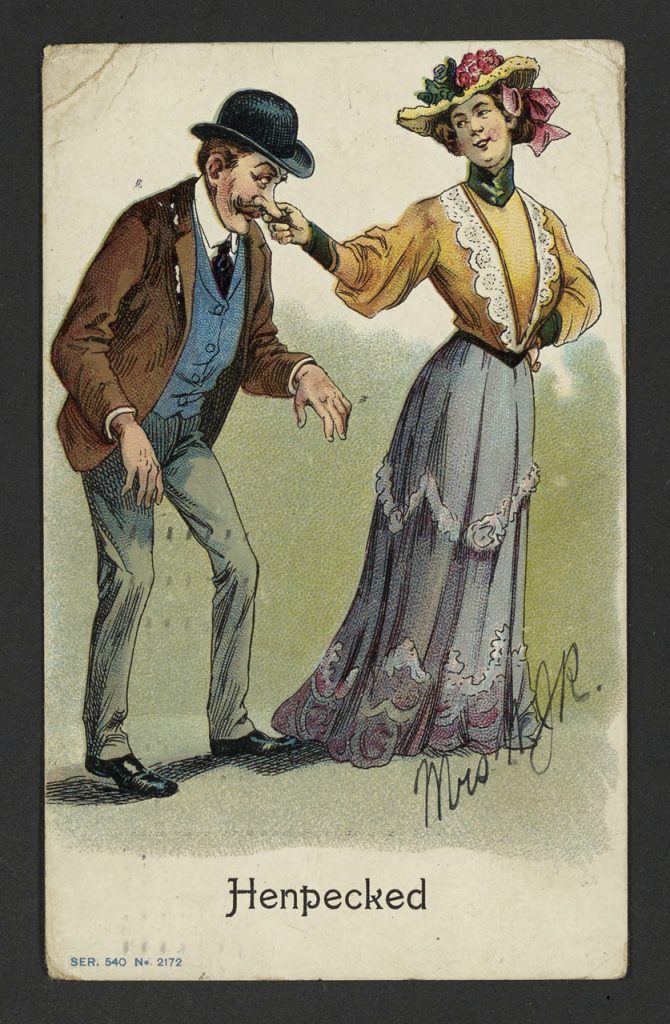 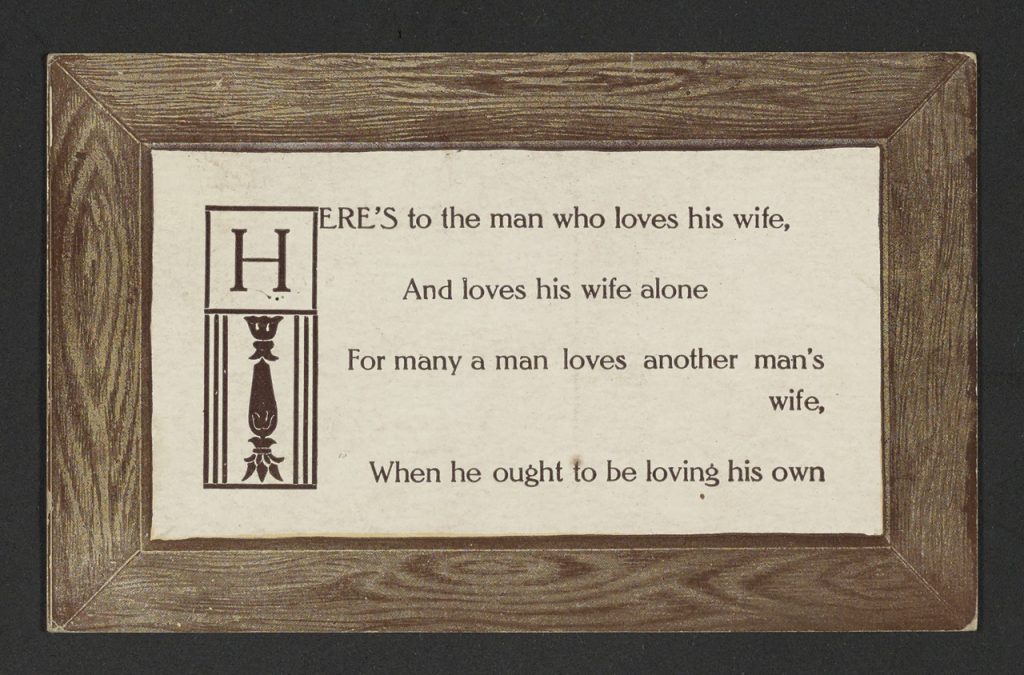 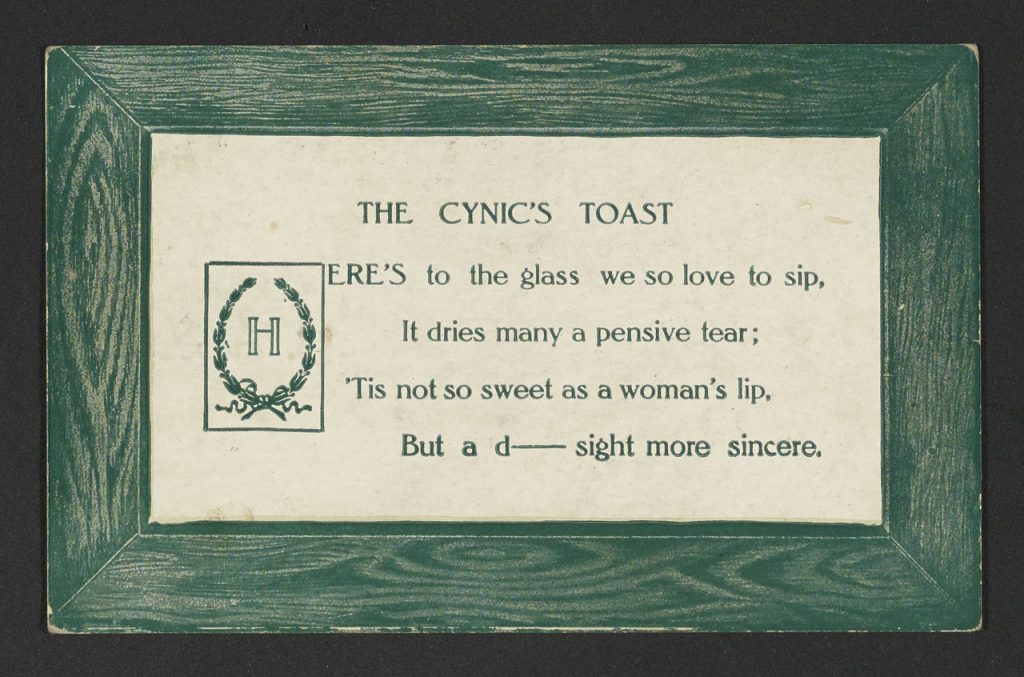 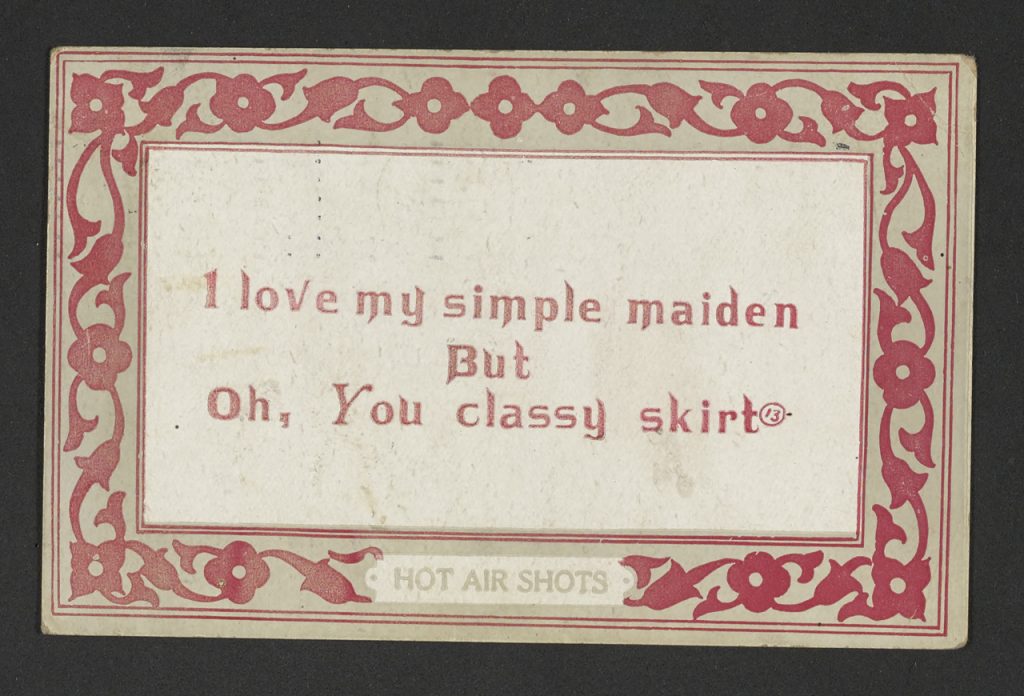 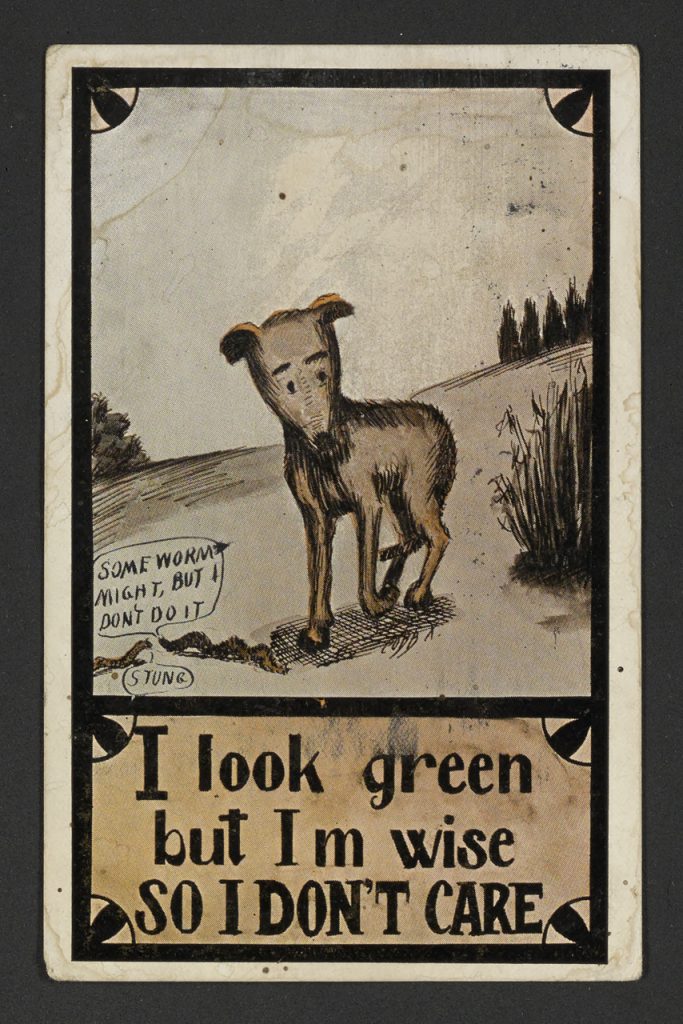 These Valentine’s cards sent to Iva certainly seem to bear out this sentiment. One card was titled “To Miss Flirty,” and provided a prescription for “one (only one) fellow.” On another titled “The Cynic’s Toast,” the author claimed that “the glass we so love to sip” was “not so sweet as a woman’s lip, but a d—- sight more sincere.” On another card, John added a handwritten annotation. The card, labelled “Absence makes the heart grow fonder,” shows one man kicking another out the door, while a woman looks away in apparent despair. John’s note instructs Iva: “This is what you ought to do.”

According to a handwritten note on the cause, the case was dismissed in November 1911, on the motion of the plaintiff “on the ground that they have resumed their marital relations.” Whether they had a successful marriage thereafter is doubtful since John lists his marital status as single on the 1914 passenger list of the U.S.S. Coppename sailing from Belize. John Titzel died at sea in 1917 on the U.S.S. Momus, a transport ship carrying troops to France. Iva married again in 1918 to James Laracy and remained married to him until his death in 1956. She died in 1963 in Virginia Beach.