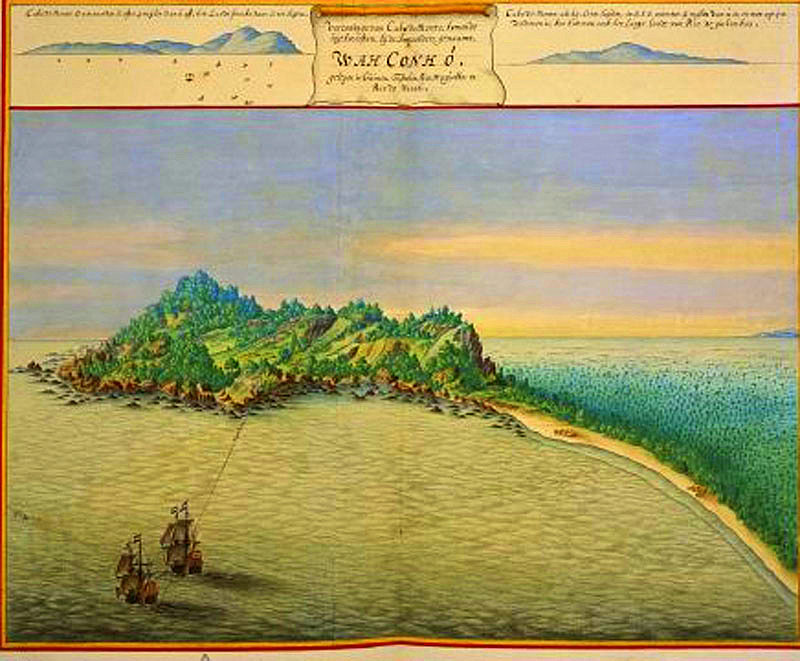 Often, researchers will utilize several collections or sources housed at the Library in order to get to the truth of a matter, or to gain a better understanding of the complexities of an issue. The Prince Edward County chancery cause Executors of John Watson vs. Dosha, etc., 1862-001, tells part of the convoluted story of 66 enslaved people emancipated by the will of John Watson, who died in 1856, and the efforts of his executors to distribute the funds remaining from his estate to them.

Some of the gaps in the story are filled in by a second chancery cause, Dosha, etc., vs. Executors of John Watson, 1873-001, as well as documents in the Dupuy Family Papers, 1810-1866, which are also housed at the Library. In his book Family Bonds: Free Blacks and Re-enslavement law in Antebellum Virginia, author Ted Maris-Wolf devoted almost an entire chapter to the story of the Watson emigrants, drawing heavily from LVA’s collection.

According to the bills in both chancery causes, Watson’s executors, Joseph Dupuy and Robert Smith, had been instructed to send Watson’s emancipated slaves to Liberia through the American Colonization Society. The original bill included the names, ages, and relationships of 66 emancipated people who boarded the Mary Caroline Stevens, a ship owned by the American Colonization Society, in Norfolk on 12 November 1857, bound for Liberia. It also listed names and ages of those who had “since died” (many likely during the voyage), ranging in age from two-month-old Emma to 80-year-old Isaac. Documents in Dupuy’s account book noted that man, known as “Old Cesar,” had refused to leave Virginia, and had been sold by court order to Robert Smith. Two men later decided to return from Liberia, and by law were required to “choose” new owners:  William chose Smith, and James Booker chose Dupuy’s sister-in-law, Emily H. Dupuy, who was known to have abolitionist sentiments. According to Maris-Wolf’s research, it is likely they were enslaved in name only. 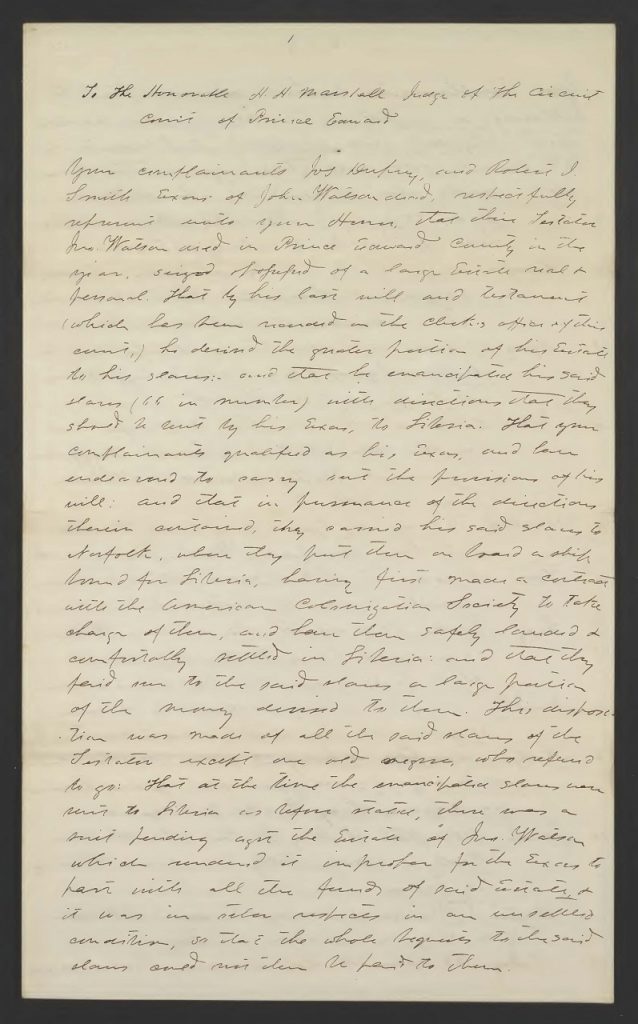 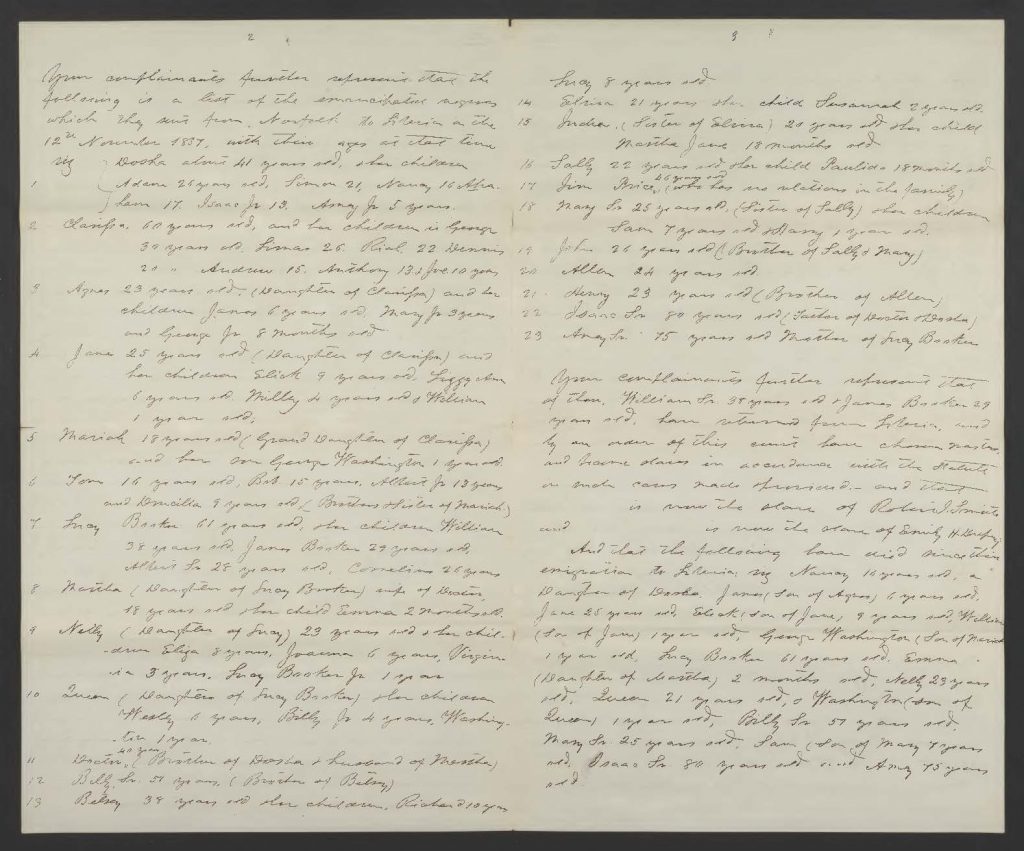 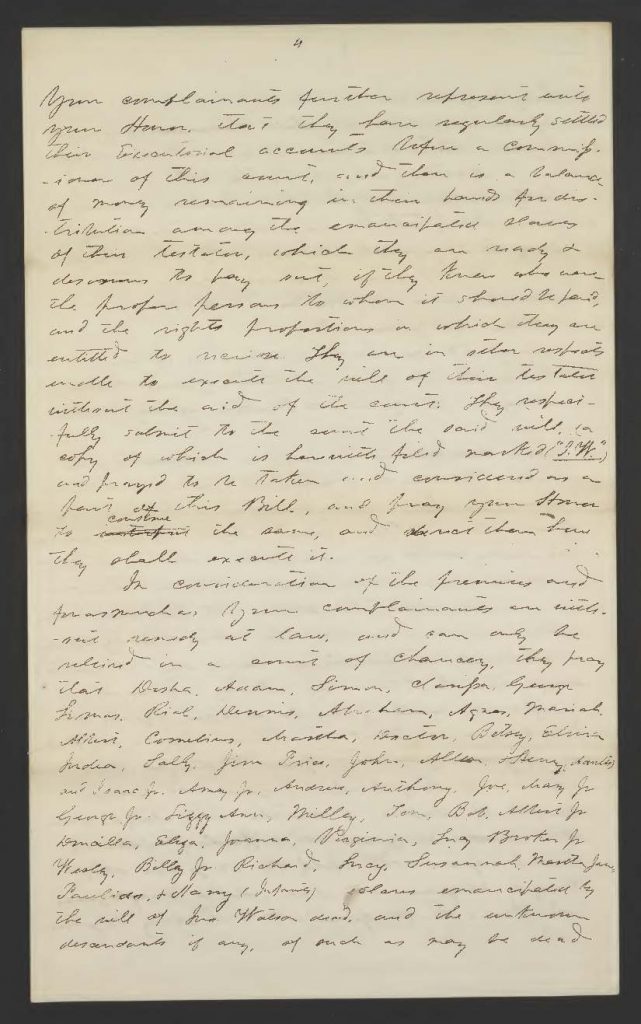 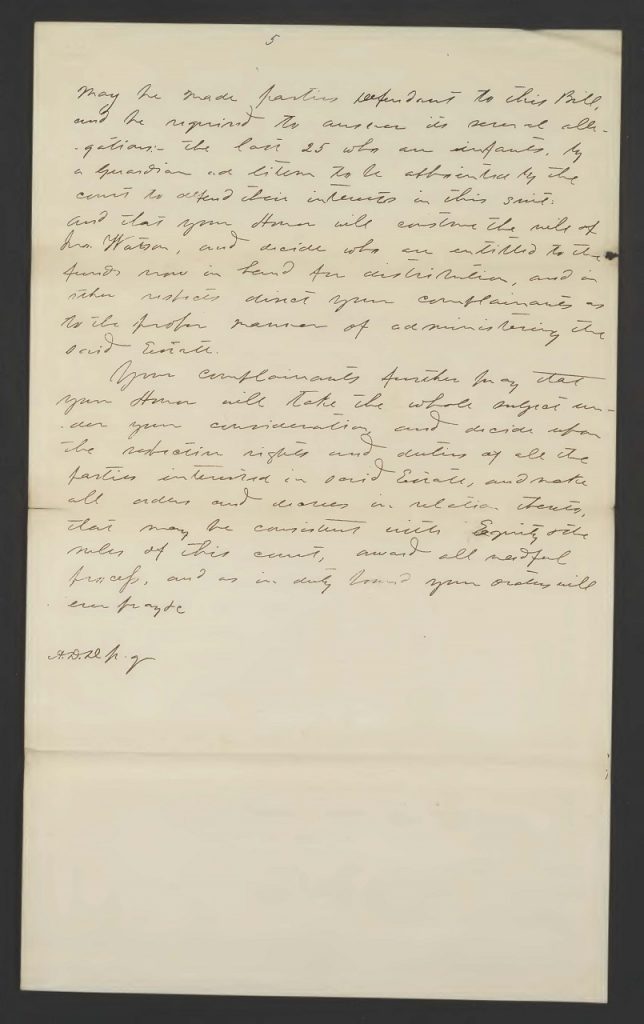 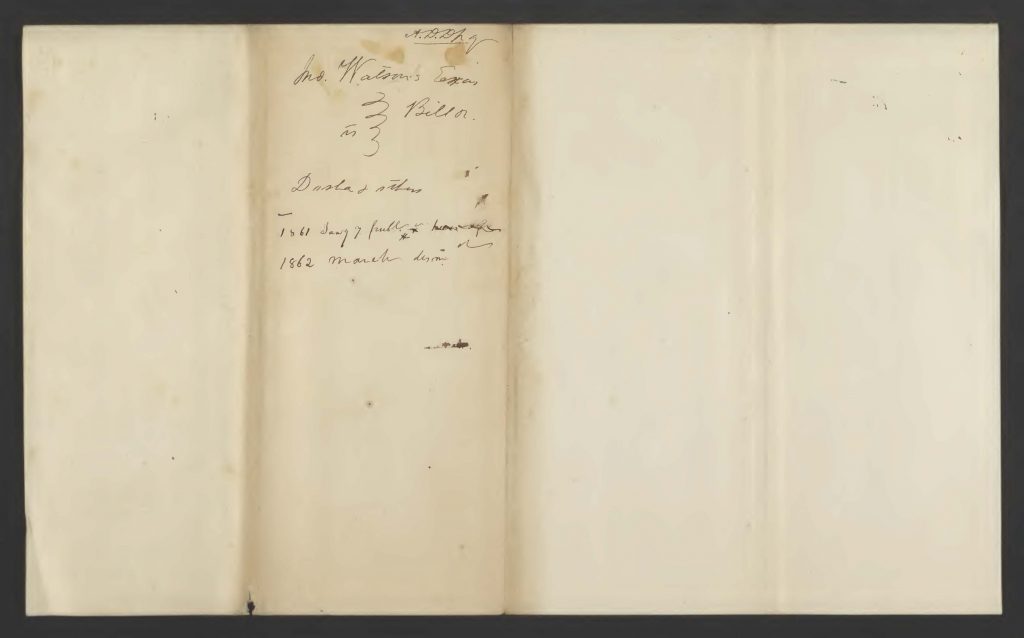 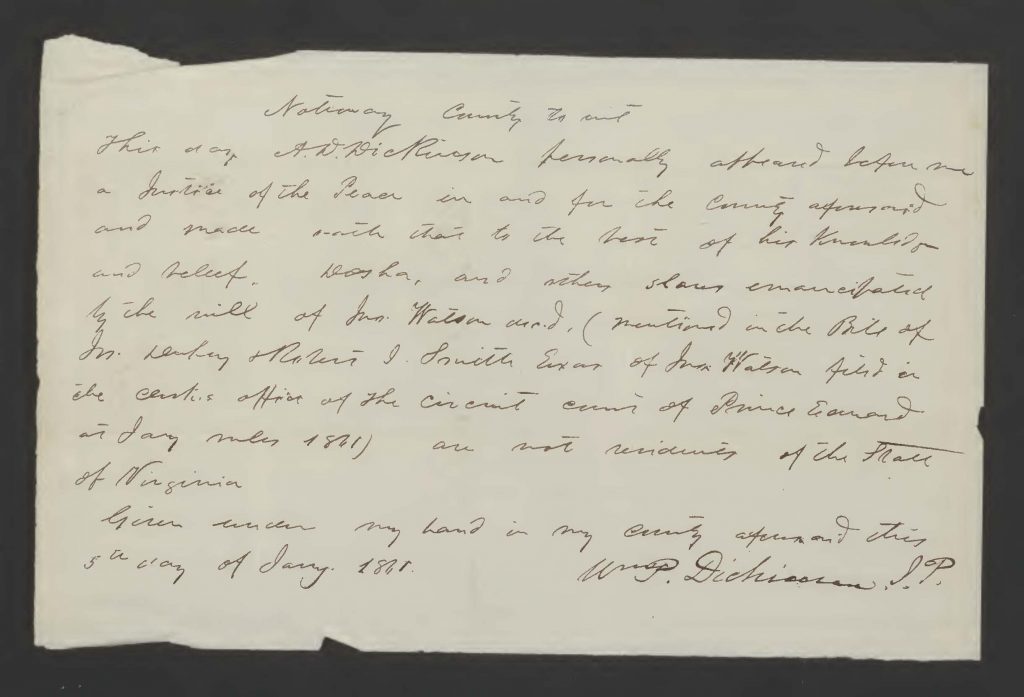 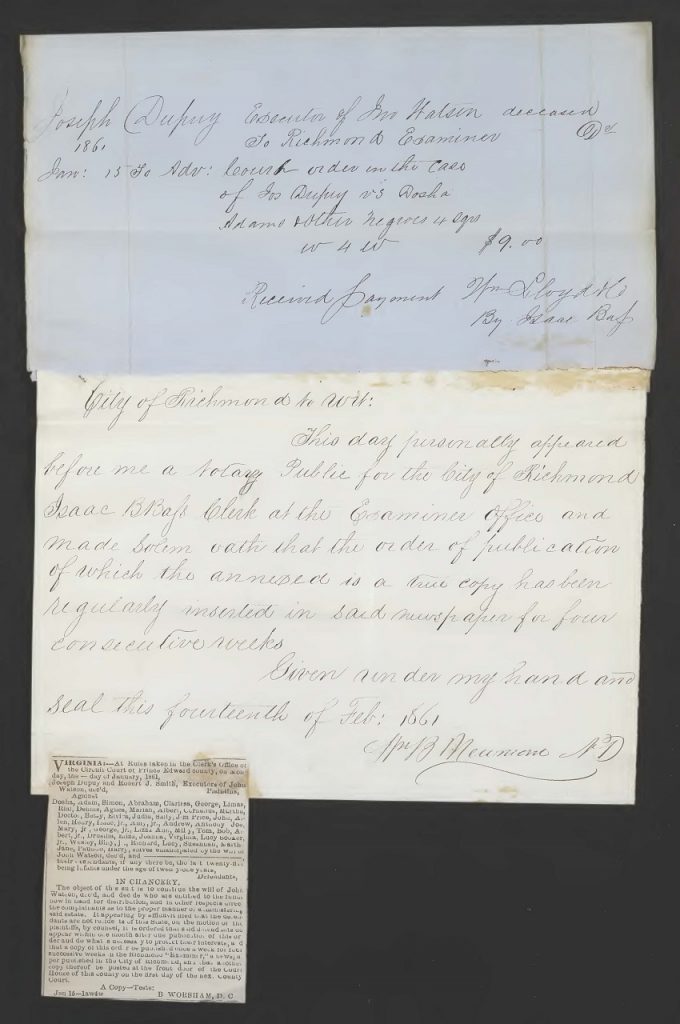 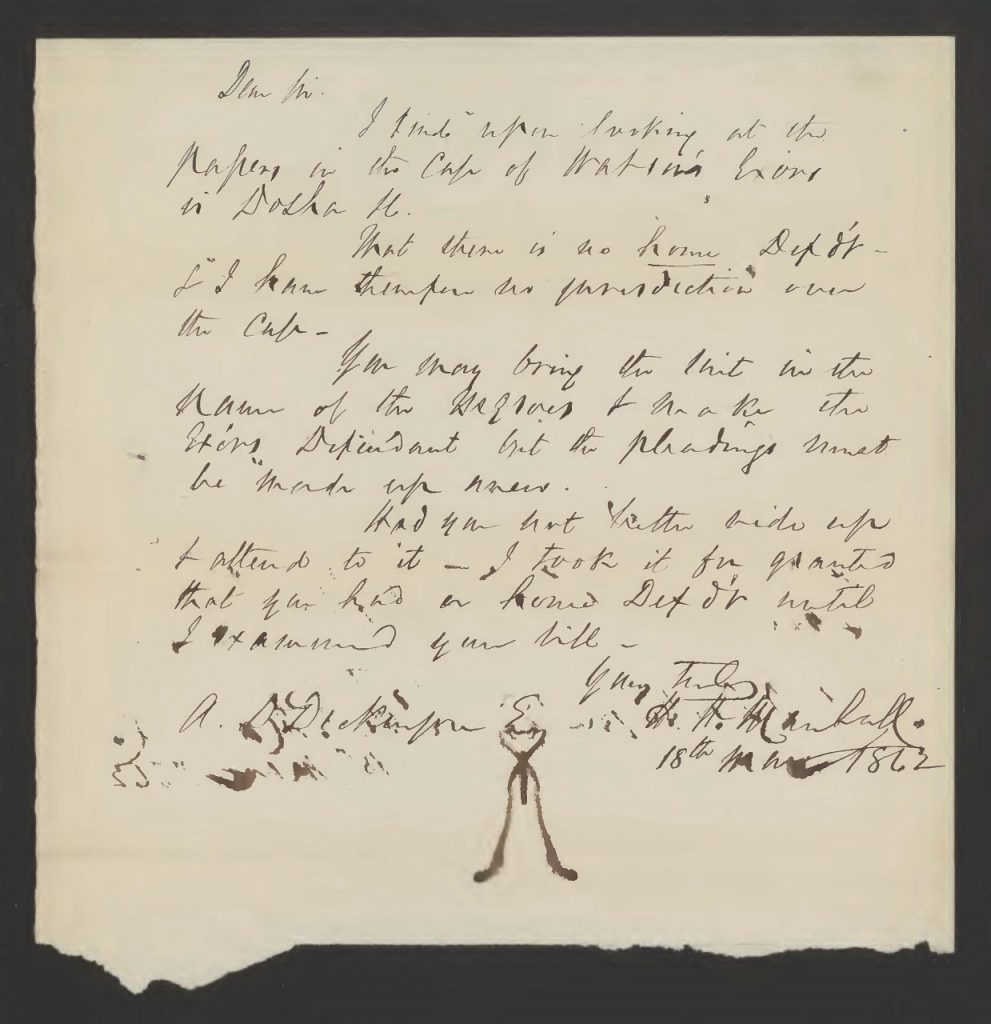 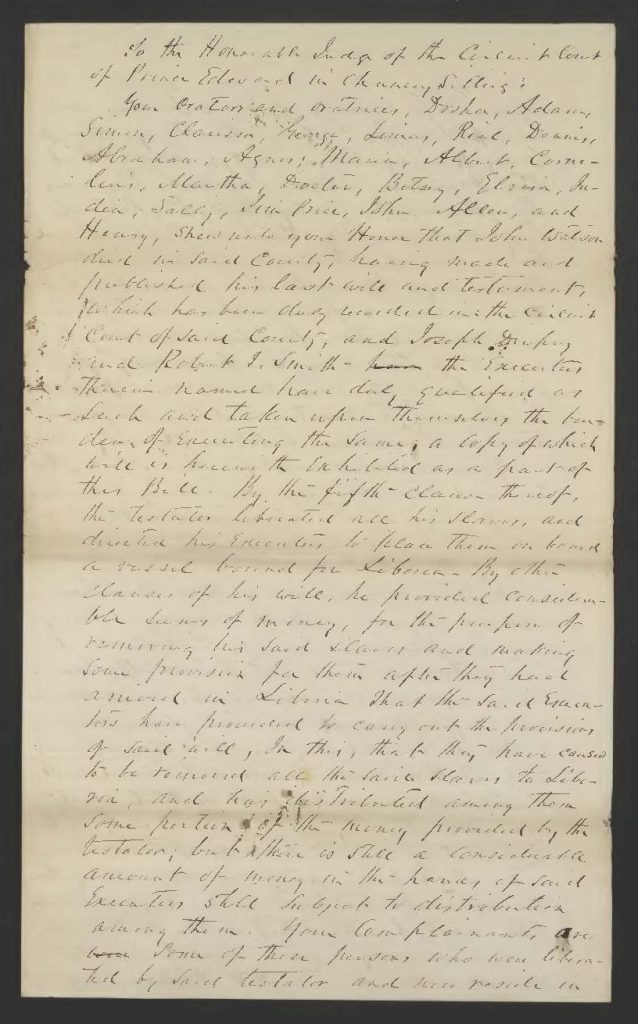 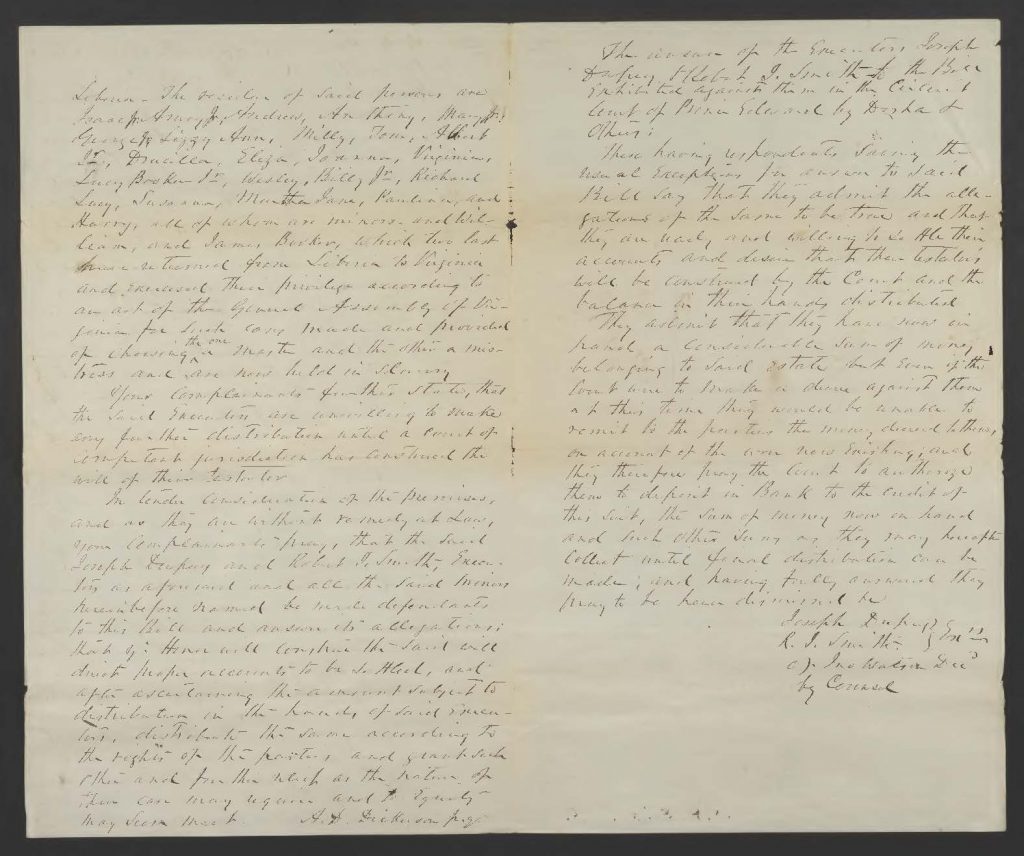 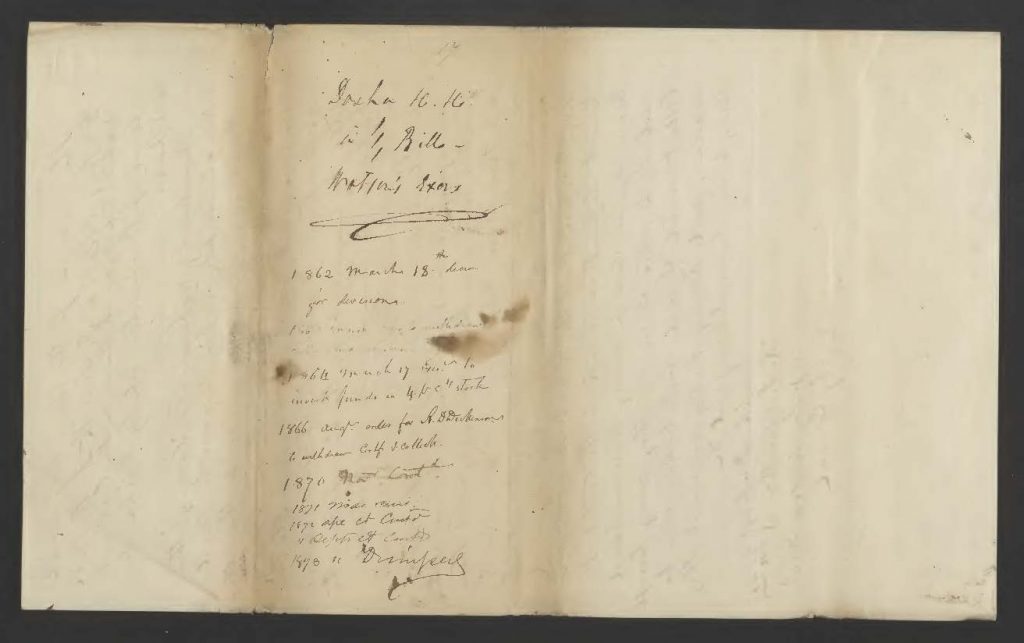 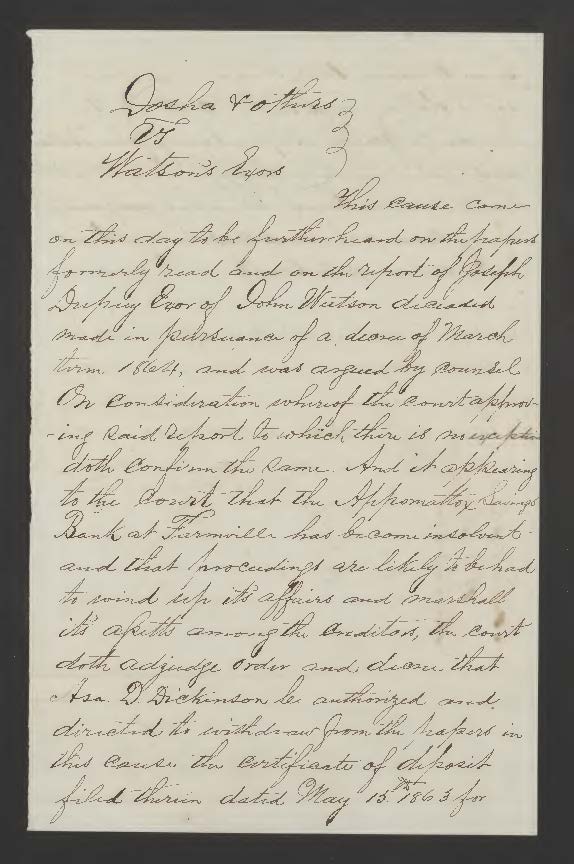 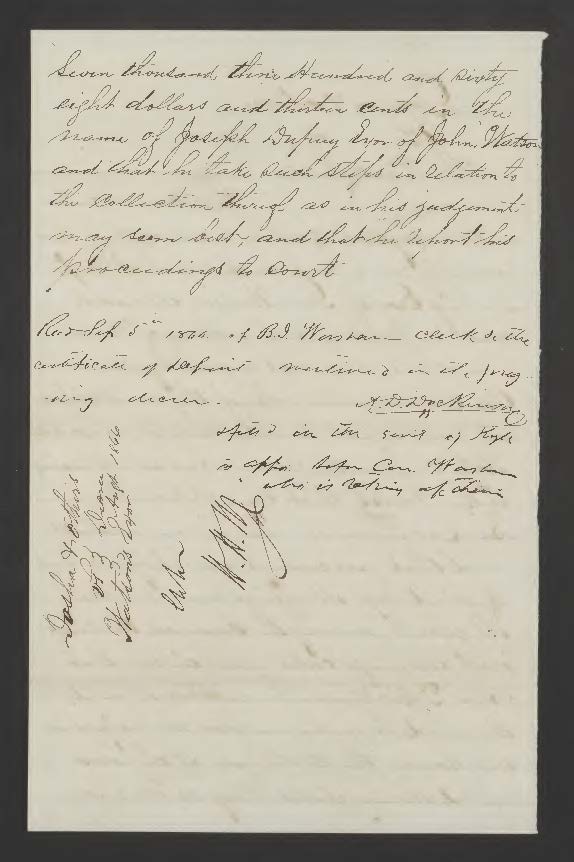 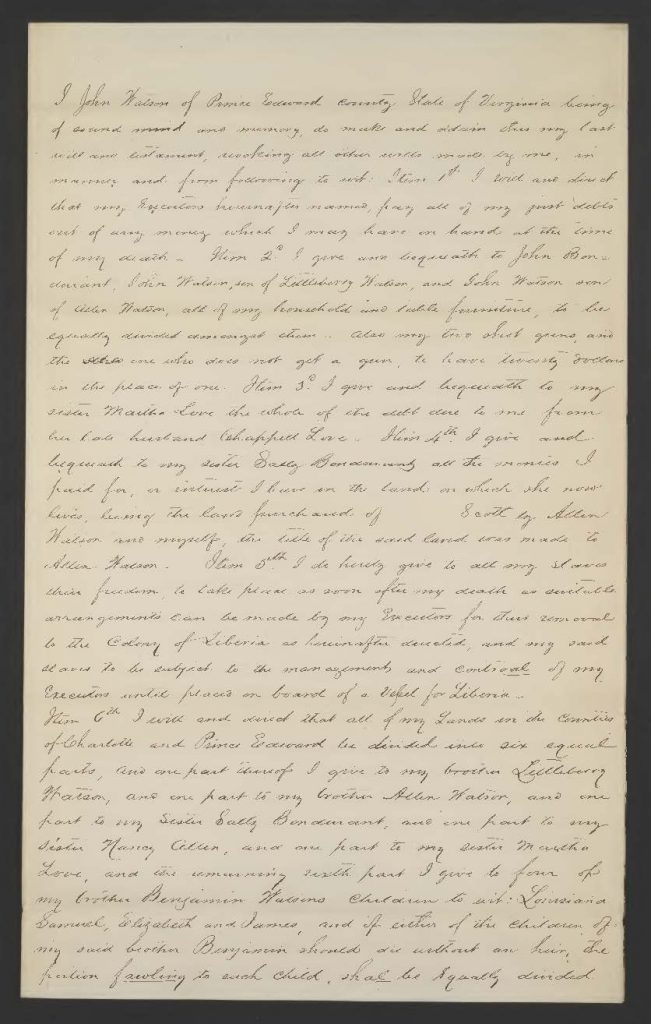 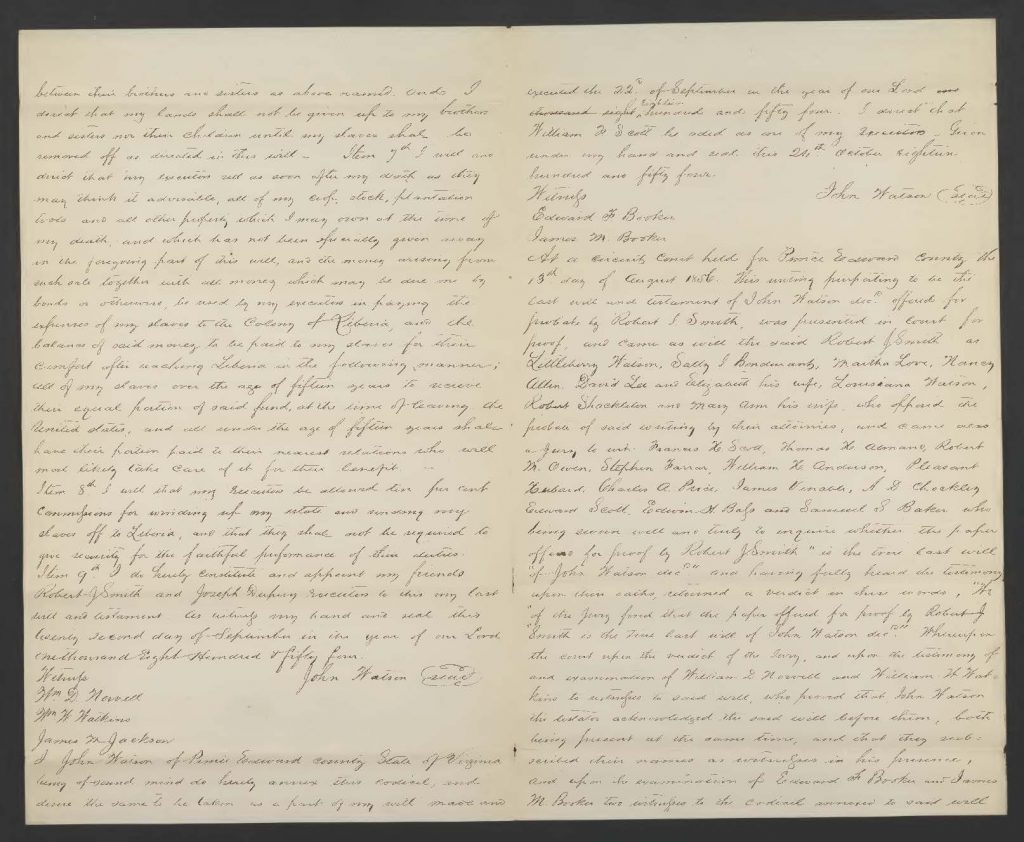 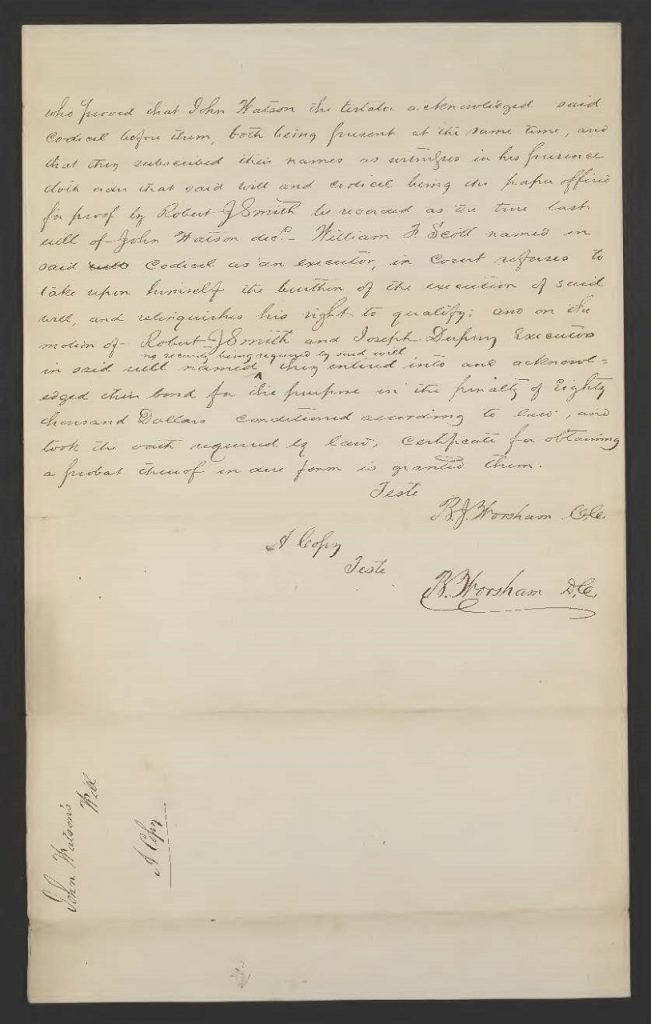 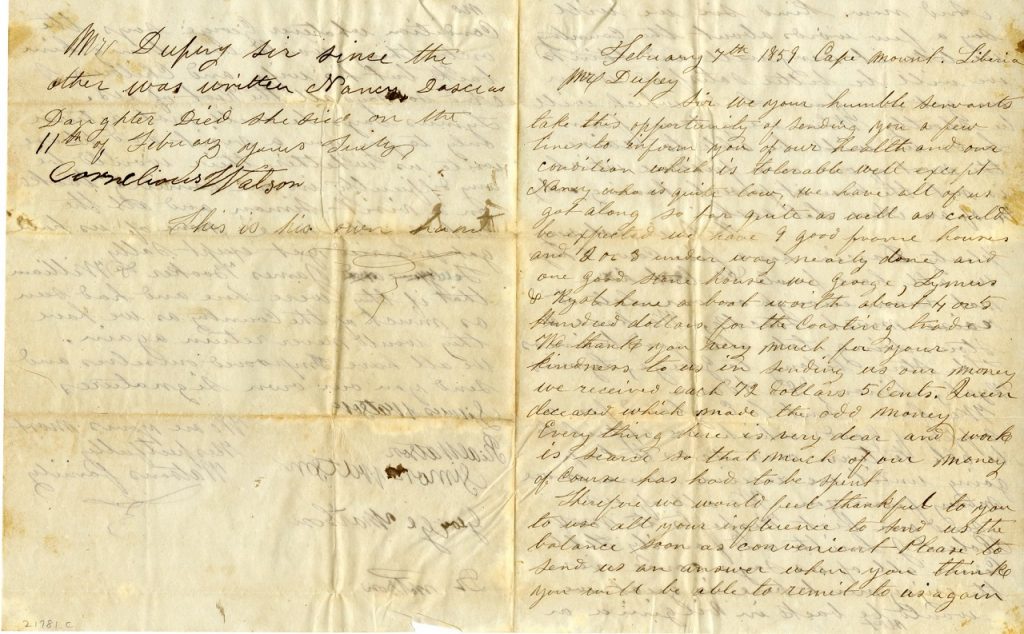 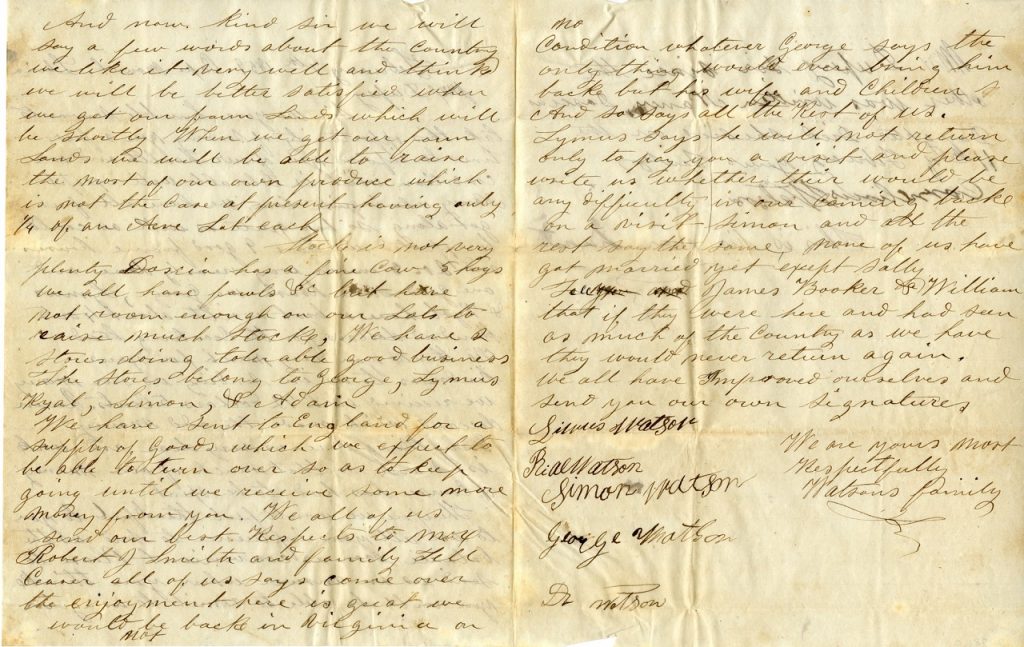 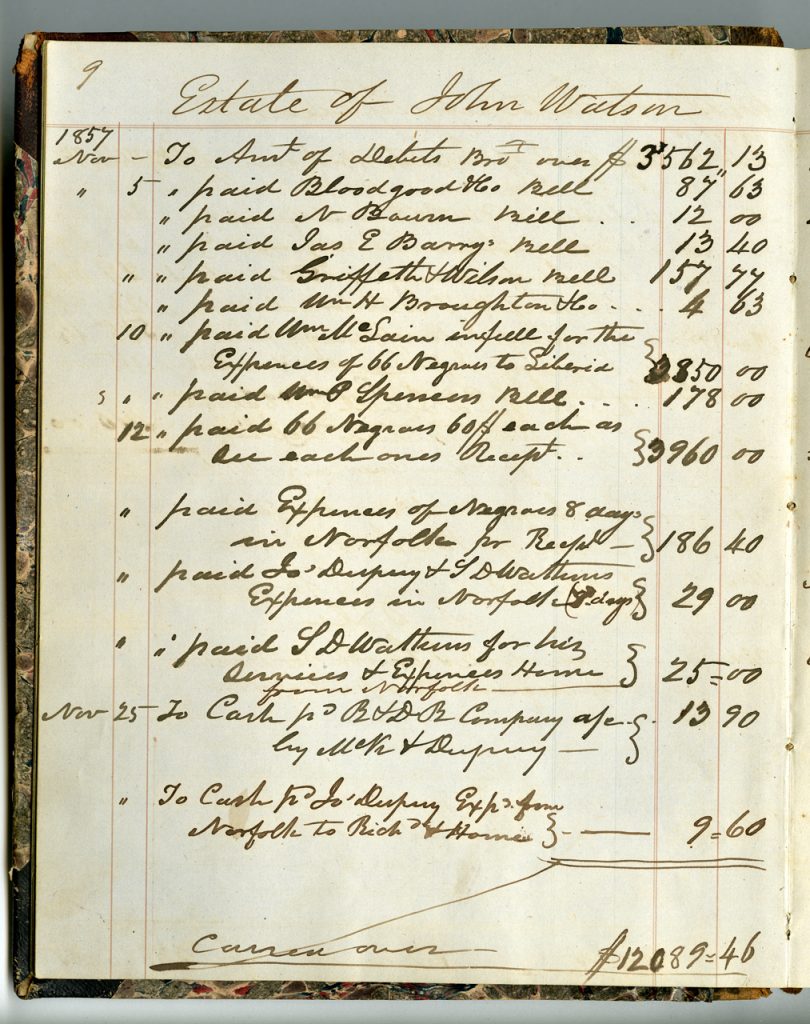 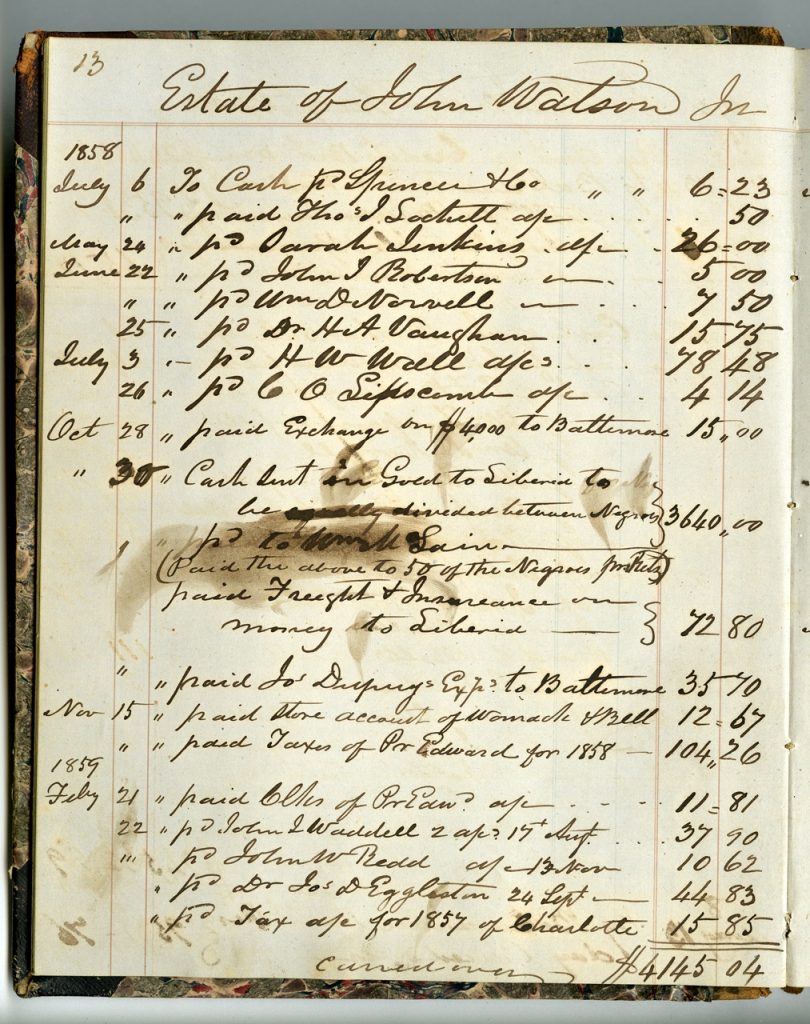 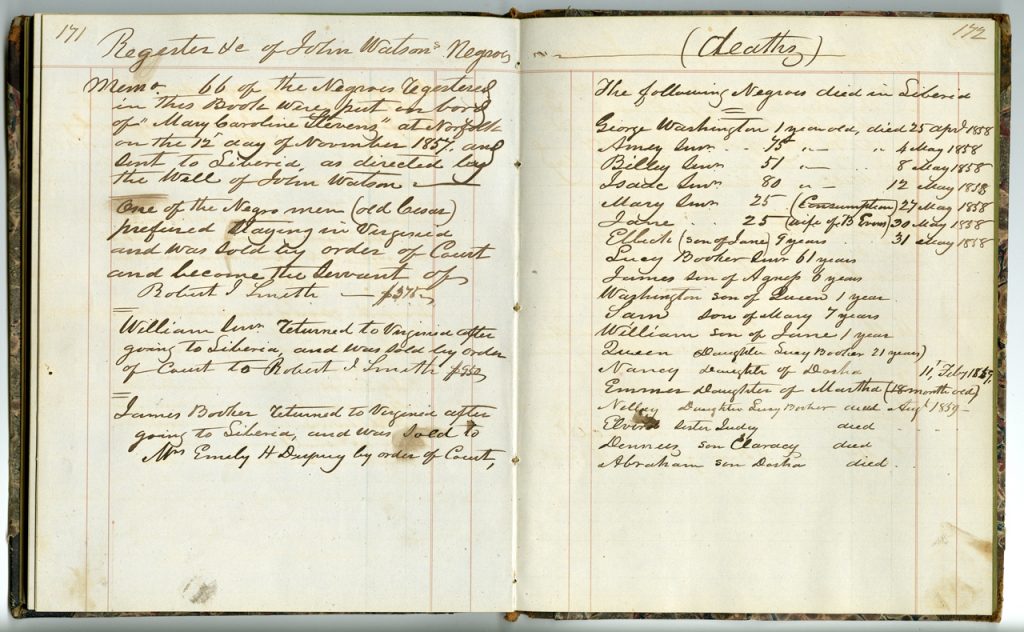 But why were there two different chancery causes, and why were they so many years apart? Both causes sought to determine how and to whom to pay estate funds, now that the formerly enslaved persons were free in Liberia. Dupuy, especially, was eager to settle the estate promptly and fairly. However, an 1861 affidavit stated that “…slaves emancipated by the will of Jno. Watson, dec’d…are not residents of the state of Virginia.” Thus, an order of publication was placed in the Richmond Examiner to run for four weeks, requiring the defendants to appear within one month of its publication. For a variety of logistical reasons, it was highly unlikely the defendants would ever have seen the order, and impossible for them to return to Virginia from Africa to answer it if they had read it.

Over a year later, in March 1862, Judge H.H. Marshall sent a sharp note to A.D. Dickinson, counsel for the complainant, admonishing him for overlooking another glaring detail:

” I find upon looking at the papers in the case of Watson’s Exrs vs. Dosha etc.,
That there is no home Defd’t & I have therefore no jurisdiction over the case.
You may bring the suit in the name of the negroes & make the Exr’s Defendant but the pleadings must be made up anew.
Had you not better side up & attend to it—I took it for granted that you had a home Def’d until I examined your bill.
Yours Truly,
H.H. Marshall
18th Mar. 1862″

That same day, A.D. Dickinson wrote a hasty letter to Isaac R. Watkins explaining that he was ill and had begun a draft of a new bill reversing the plaintiffs and defendants and asked Watkins to complete it for him. According to the docketing information, the court dismissed the 1862-001 cause that month.

Account books and letters in the Dupuy Family Papers help to fill in some gaps, and document several good faith efforts by the executors to compensate the Watkins emigrants. All 66 individuals (or their parent/sibling/relative) received $60 the day they embarked for Liberia in November 1857. In October 1858, 50 individuals (“all that were living on the 22nd day December 1858”) were paid $72.80 each in gold. However, a letter to Mrs. Dupuy dated 7 February 1859, penned by an unnamed Watson but with six other signatures, thanks the family “very much for your kindness to us in sending us our money we received each 72 dollars 5 Cents. Queen deceased which made the odd money.” Assuming that Queen was the only person to have died, her $72.80 should have been divided among the 49 others, adding $1.48 to each person’s allotted $72.80 for a total of $74.28 each. Did an intermediary intentionally miscalculate? Why they received only $72.05 each is a mystery.

This all still begs the question:  Did the Watson emigrants ever receive their due inheritance? Ted Maris-Wolf’s well-researched book and the Dupuy Family Papers reveal the executors’ good intentions. Dupuy often advocated on the emigrants’ behalf with local officials and the American Colonization Society regarding fair housing, safety, and other details. As for receiving their promised inheritance, even the court records do not tell us. An 1866 decree directed the executors to withdraw $7,368.13 in estate funds from the Appomattox Savings Bank at Farmville as it had “become insolvent, and…proceedings are likely to be had to wind up its affairs.” It is unclear where the money went from there.  The final docketing information on the 1873 bill simply noted “1873—Dismissed”.