If you read this blog, you might know that the Virginia Newspaper Project (VNP) contributes digitized newspapers to two websites, Chronicling America and Virginia Chronicle. These sites are both wonderful repositories of historic newspapers from Virginia, but they aren’t the same, and don’t have exactly the same content. 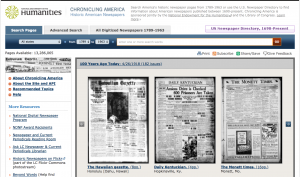 Chronicling America hosts newspapers digitized through the National Digital Newspaper Program (NDNP), funded by the National Endowment for the Humanities and the Library of Congress. Newspaper Projects across the country apply for two-year grants that allow  each project to digitize about 100,000 pages per grant cycle.

The Virginia Newspaper Project has completed four grant cycles, and has been funded for its fifth. As a result, Chronicling America has 489,994 pages of Virginia newspapers.

Virginia Chronicle, which hosts the pages digitized through the NDNP, also contains additional digitization projects undertaken by the VNP. The Virginia Chronicle database currently has 977,408 pages of digitized newspapers–more pages will be added soon, which will put it at or near the one million page mark! 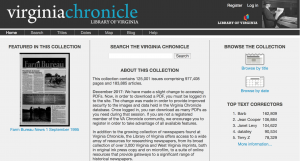 The nearly 500,000 pages on Virginia Chronicle not found on Chronicling America were funded by various sources, including publishers, donors, the Virginia Farm Bureau and the Library of Virginia itself.

Some of the newspapers on Virginia Chronicle do not fall under the scope of the NDNP, like those that are more current and non-traditional newspapers, like those published by high schools or the Civilian Conservation Corps. Virginia Chronicle has 598 issues of The Monocle, John Marshall High School’s newspaper, spanning from 1929-1973. These offer a fun, fascinating look at the life of Richmond’s teenagers through history. There are also issues of The Casket and The Institute Jewel, the school papers of The Suffolk Female Institute and the Suffolk Collegiate Institute, respectively.

Virginia Chronicle also allows access to a lengthy list of digitized C.C.C. newspapers from Virginia, and even to some from outside of the Commonwealth. The Civilian Conservation Corps was created during the Depression as part of the New Deal to put young men to work. Many “companies,” as the groups of men from each camp were called, put out camp newspapers. These newspapers offer an intimate look at what life was like for young enrollees, away from their families, in a time of crisis for the nation. Camp newspapers had illustrated covers, comics, poems, health advice, safety reminders and detailed information about daily life and C.C.C. projects. For anyone interested in family history, C.C.C. papers are full of names of the men who took part in the program. Browse the C.C.C. camp papers here.

For those curious about newspapers from a particular city or region, Virginia Chronicle’s newspapers can be browsed via map:

If you’re looking to browse historic newspapers, Chronicling America has a topics page to get you started, or try the category drop-down menu on Virginia Chronicle. We recommend browsing a bit, even if you know what you’re searching for–you never know what you’ll find in old newspapers.