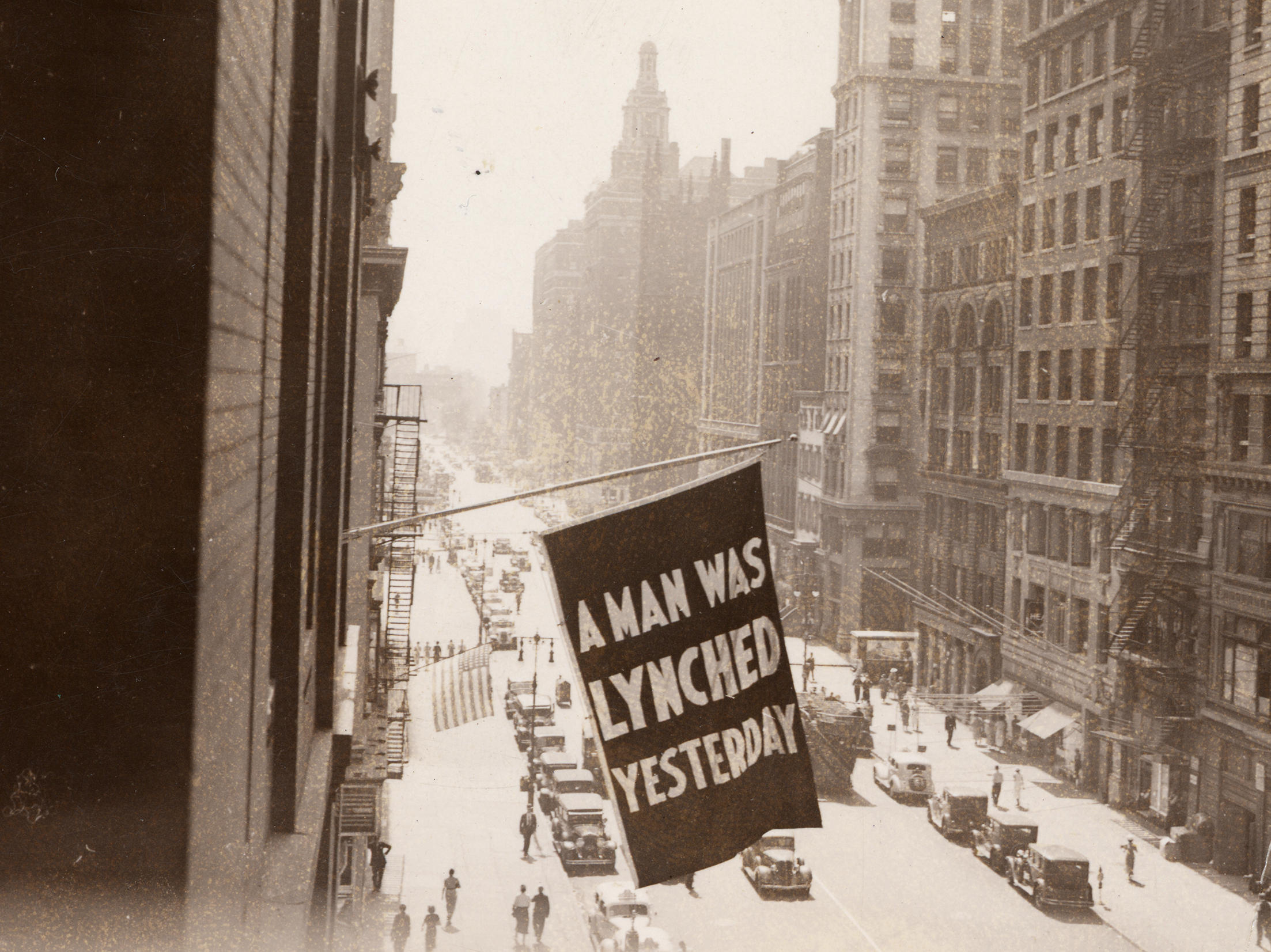 The Legacy of John Henry James

A flag announcing a lynching is flown from the window of the NAACP headquarters on the 69 Fifth Ave., New York City in 1938. Courtesy of the Library of Congress.

Fearing a lynching, local authorities placed James on a train for Staunton the night before the convening of the grand jury. When the train reached Wood’s Crossing near Charlottesville, it was met by an angry mob. The size of the mob varied from 20 to 200 people depending on which newspaper account one reads. Armed men stormed James’s car, placed a rope around his neck, and dragged him to a nearby tree. They demanded that James confess to the crime, gave him a few minutes to pray, and hanged him. James’s death did not quench the mob’s thirst for revenge. They fired dozens of bullets into James’s hanging body. As the mob dispersed, people began taking pieces of the tree and James’s clothing as souvenirs. With his bullet-riddled body still hanging from a tree, the grand jury in Charlottesville, not knowing what had happened, issued an indictment against James.

In the days following the lynching, newspapers across the Commonwealth and as far away as California reported the incident. Many headlines about the lynching expressed endorsement of mob justice and made James out as a beast deserving of death: “Judge Lynch at Work,” “Court Was Too Slow,” “Colored Brute Lynched,” and “Negro Fiend Hanged.” A few newspaper accounts reported that the citizens of Charlottesville and Albemarle County approved the lynch mob’s actions because it spared Ms. Hotopp the “terrible ordeal” of a public trial. 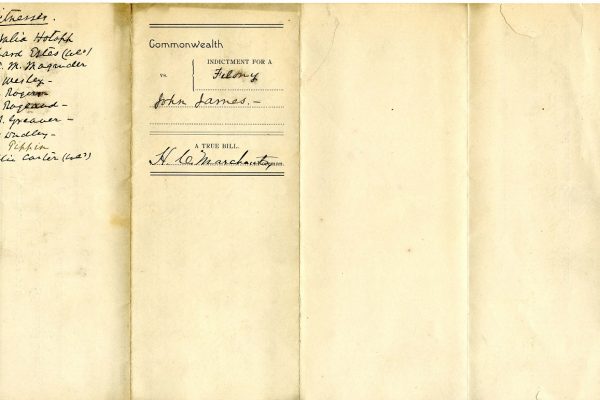 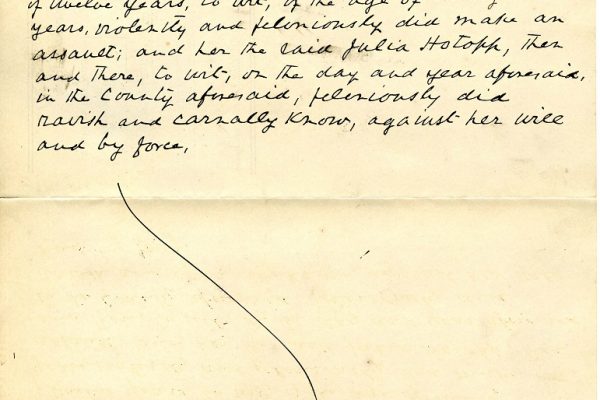 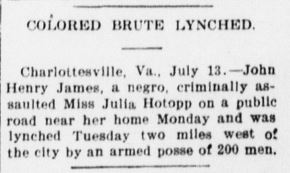 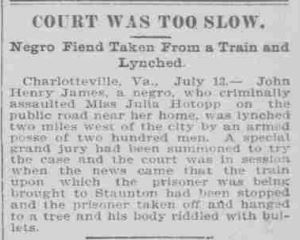 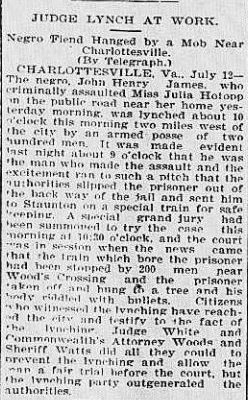 An African American newspaper, The Richmond Planet, provided a different account of James’s lynching.  The headline read, “They Lynched Him,” “A Brutal Murder,” and “The Law Defied – Anarchy in Virginia.” The Richmond Planet’s account of James’s lynching emphasized the impotency of local authorities, the brutality of the mob, the complicity of the citizens of Charlottesville, and the farce of the legal system. In an editorial about the lynching, the Planet’s publisher John Mitchell wrote, “The lynching of John Henry James (colored) was as dastardly in its conception and as heinous in its execution as the crime with which he stood charged.” Should he have been guilty of the crime, James deserved punishment. “A colored man who places his hands upon a white woman can be legally hanged for it.” However, the law did not satisfy the lynchers’ need for “justice” and in Mitchell’s opinion that mentality was dangerous for all Virginians—black and white. Mitchell prophesied, “The lynching of John Henry James will be far more damaging to the community than it will be to the alleged criminal. His troubles are o’er; those of the community have just begun.” 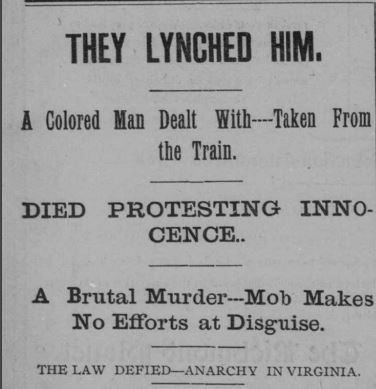 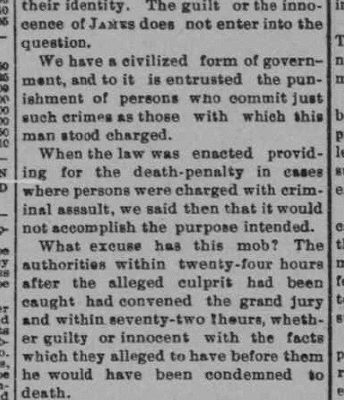 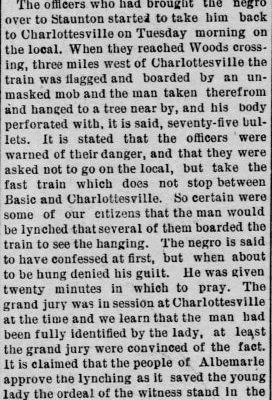 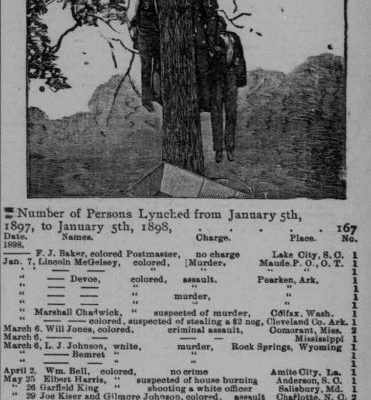 Over a hundred years later, John Henry James is back in the headlines. Citizens in Charlottesville are memorializing James as part of a larger effort to heal the damage to their community that Mitchell predicted a century earlier. City Councilor Kathy Galvin told the C-VILLE Weekly, “It’s very important for Charlottesville to understand its own legacy of brutality and racism against African-Americans[…] I think it’s about time 120 years later that we acknowledge [James’s] brutal murder.” In July, the Jefferson School African American Heritage Center in Charlottesville will lead a group of local citizens on a pilgrimage to The National Memorial for Peace and Justice in Montgomery, Alabama founded by The Equal Justice Initiative (EJI). They will bring soil from the site of John Henry James’s death. The Charlottesville jar will be placed with other containers of earth representing numerous lynching sites from around the country. The Charlottesville travelers will bring back a coffin-sized memorial to John Henry James and plan to place it near the Albemarle County courthouse at Justice Park.

For more information on The National Memorial for Peace and Justice, see The Guardian or read the EJI report “Lynching in America: Confronting the Legacy of Racial Terror,” which documents more than 4,400 lynchings of black people in the United States between 1877 and 1950. EJI identified 800 more lynchings than had previously been recognized.