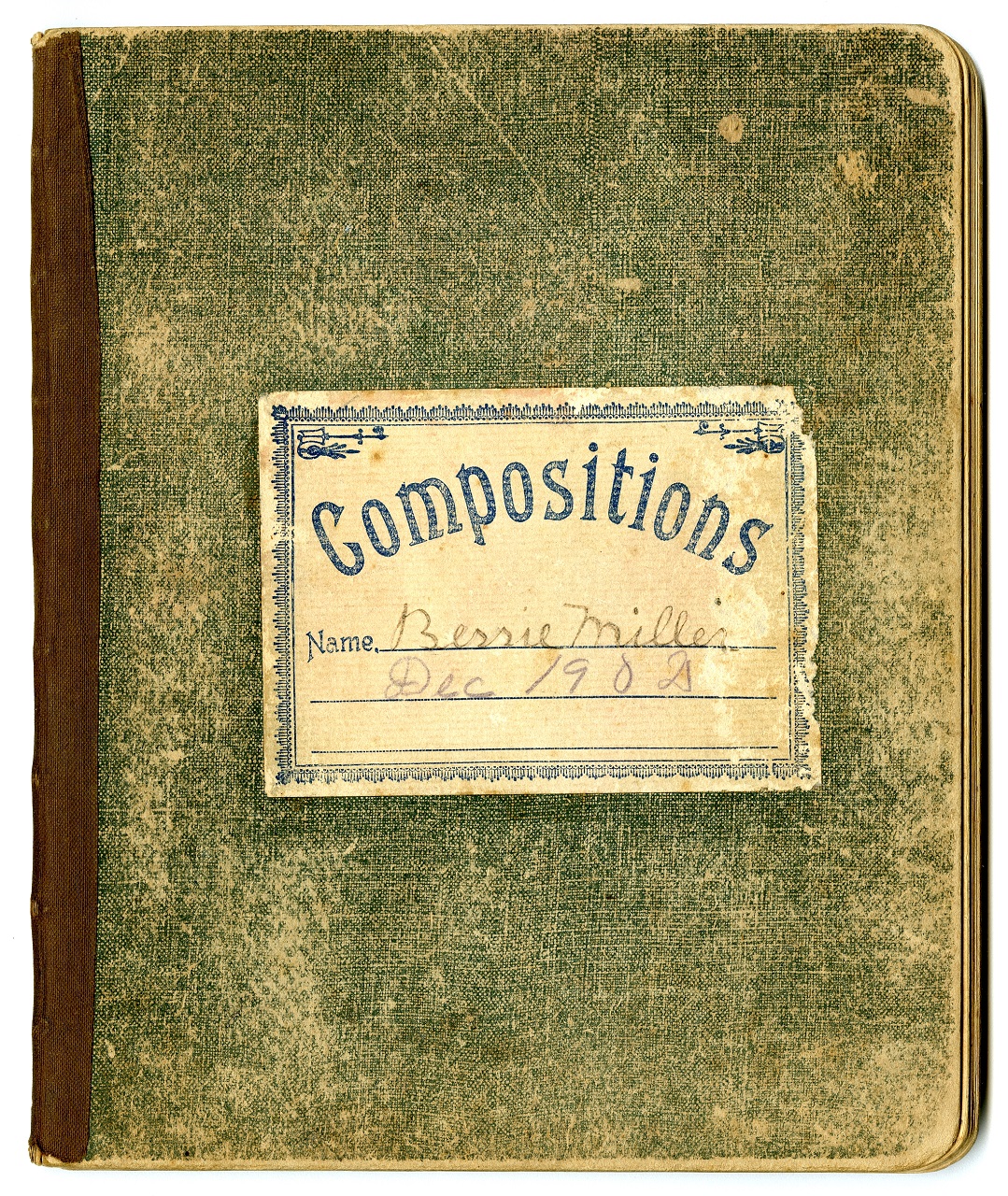 The Library of Virginia recently acquired a family photograph collection identified as belonging to the Brooks/Ellis families. A composition book labeled “Bessie Miller December 1902” accompanied the photos in the acquisition. The notebook mostly contains essays on topics such as Julius Caesar and “The Seven Wonders of the World,” along with occasional transcriptions of letters to friends or relatives. One particular entry caught the attention of staff, a melancholy view of summer vacation.

Vacation which always comes after a long tiresome spell at school as most children think it is most here[.] To most children it is a joyful time, but to me there is nothing sadder than the last day of school. This year most especially not knowing whither [sic] I’ll ever be at school again or not. Vacation always comes in the warm summer months when children need the most rest from study. During this time we visit our friends sometimes we spend evenings reading beautiful stories. It is during vacation that our flowers are in their most beautiful state and that our fruit trees are laden with the most luxurious fruit and our shade trees giving the most pleasant of shade. We will visit the beach and seashore[,] go on many pleasant picnics[,] have our childrens [sic] day and revivals[,] have our friends visit us, but with all of these and many more pleasures which we have during vacation I would rather be at the little school house with my teacher and the scholars than have all the vacations that could be given. And I dread this vacation more than any I can remember and wish it could be put off a little longer.

It was not hard to imagine why, in 1903, a 19-year old woman who loved to learn might be sad about the end of the school year. Transcribed letters in the composition book offer some clues. Bessie mentions not being able to visit friends over Christmas [probably in December 1902] because “Momma had so much sewing […] I thought I had better stay at home to help her” and “I have to help Momma with dinner.” These and other chores on the family farm just east of the Great Dismal Swamp surely became Bessie’s main priority. 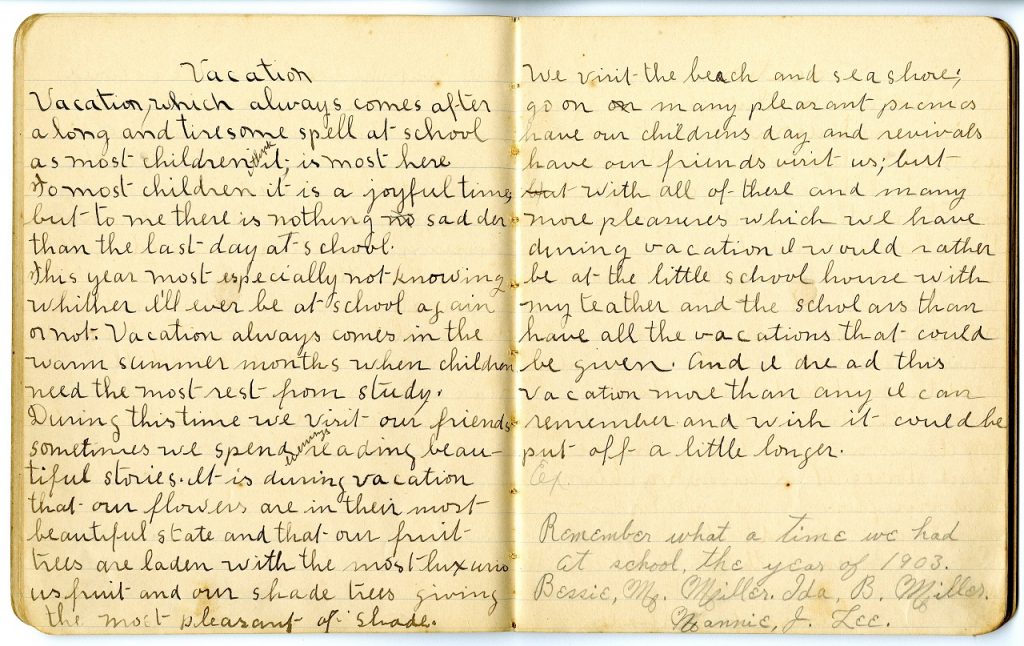 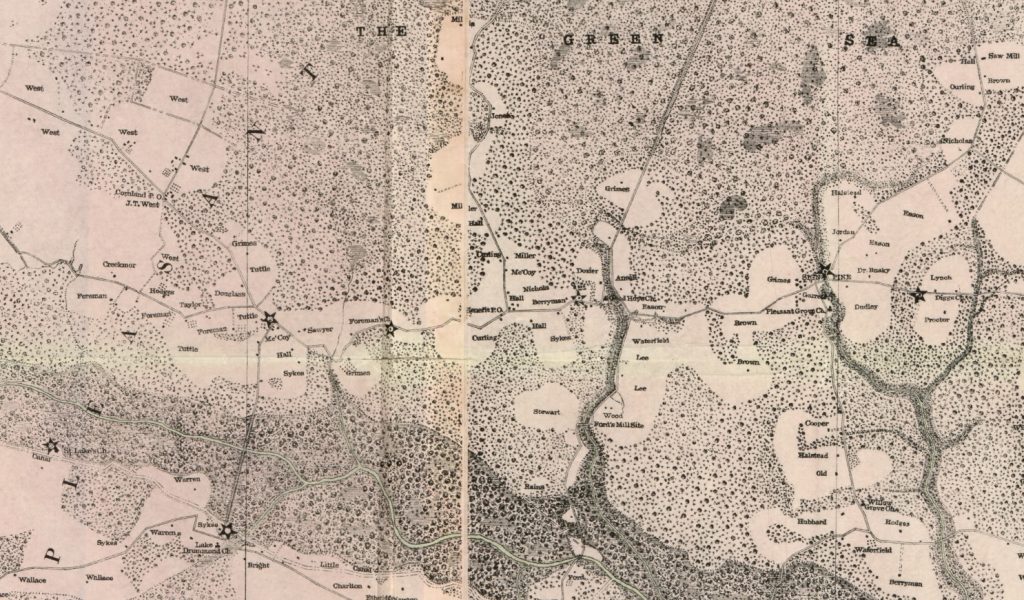 Bessie Maude Miller never did go back to school and never really left the Pleasant Grove District of Norfolk County in the subsequent seventy years. Around 1916, she married a man nearly four decades her senior named James Stewart. He was a merchant, and after he died in 1927, Bessie continued to work as a merchant. She married again in the mid-1930s, this time to a carpenter named Vernon Lee Cherry, who was closer to her age. Bessie continued as a businessperson, according to the 1940 census, and hired her sister Emma to keep house. In that same census year, she lists the extent of her formal education as the 7th grade.

Bessie became a widow again in 1947, but she went on living in the Norfolk-Portsmouth area until her death in 1977 at the age of 92.

A penciled note at the end of the vacation essay, presumably added later, reads, “Remember what a time we had at school the year of 1903.”

Editor’s note: If you’re interested in another tale of summer vacation, watch the Library of Virginia Twitter feed 3 July through 15 August. Snapshots and a travelogue from a seventeen year old girl on a road trip to Virginia in 1937 will be shared daily. Watch for the hashtag #1937RoadTrip.