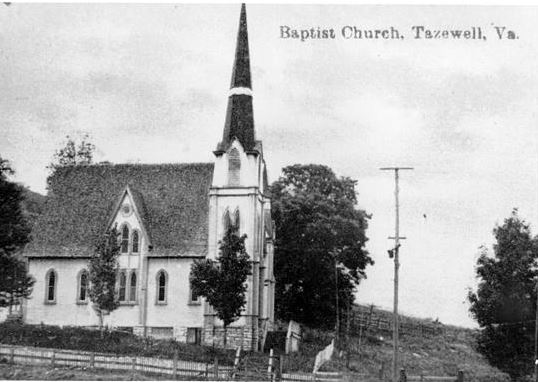 “By What Right?” Two Baptist Newspapers from Tazewell

Recently, the Library of Virginia acquired two Baptist newspapers, the Primitive Baptist and the Tazewell Baptist, both from Tazewell, Virginia. The two papers share more than just denomination and place of publication: both are small format, measuring 9.5” x 12”, both issues are dated April 1890 and both are volume one, number four. It seems there was a rift in the Baptist Church and it played out in competing, and very similar, newspapers that began at about the same time. There is only one extant issue of each, so the duration of each paper is unknown. 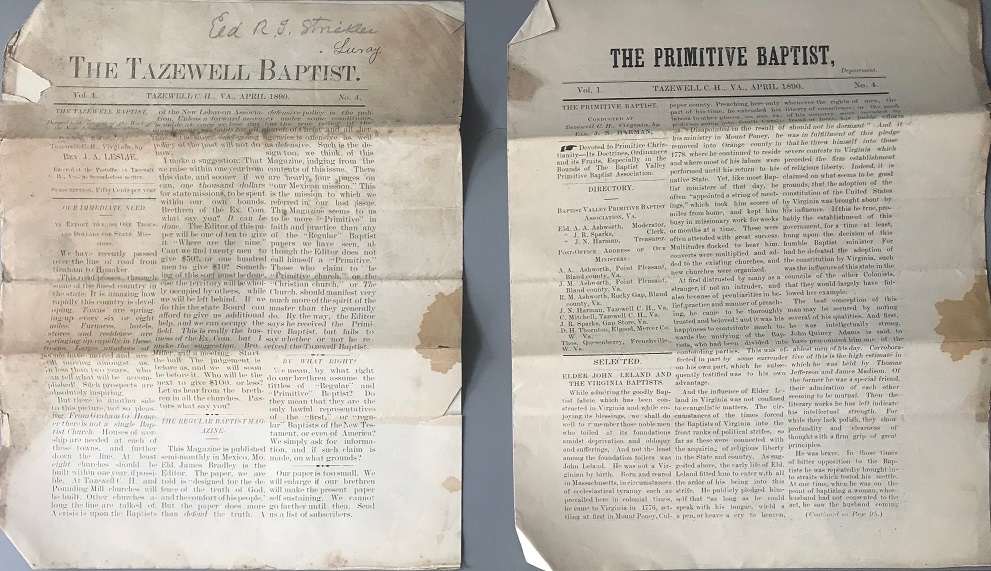 The Tazewell Baptist, published by Rev. Joseph Albert Leslie, described itself as “Devoted to the work of the New Lebanon Association” and, among other causes, hoped to raise money for state missions. Leslie arrived in Tazewell to minister for the “fledgling flock” of the Tazewell Baptist Church and later served as a teacher at Tazewell College. The Primitive Baptist was published by John Newton Harman, Sr., also a teacher and one of the founders of Tazewell College. Harman’s newspaper espoused the ideas of the Primitive Baptist movement, a more conservative sect of Baptists, which claimed to adhere strictly to the teachings of the New Testament, with rules that forbade instrumental music, the collection of tithes and dancing, among others. 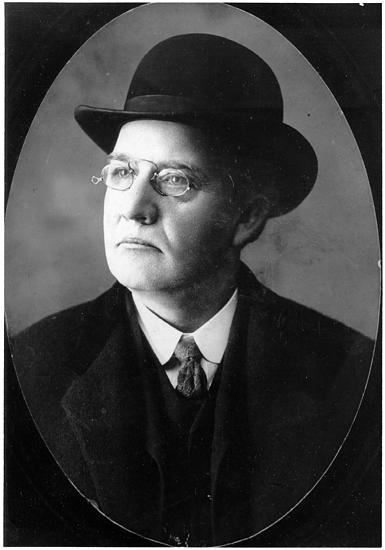 Page one of the April issue of the Tazewell Baptist posed the following question: “By What Right? We mean, by what right do our brethren assume the titles of “Regular” and “Primitive” Baptist? Do they mean that they are the only lawful representatives of the “first,” or “regular” Baptists of the New Testament, or even of America? We simply ask for information, and if such claim is made, on what grounds?” Harman responded on page two of the Primitive Baptist, which must have come out a bit later in April: “By What Right? On the first page of ‘The Tazewell Baptist’ we find under the above head, a short paragraph. We only have space in this issue to say, yes; and will furnish the grounds on which we base the claim in the May number.” Unfortunately, the May number has not surfaced, so Harman’s full response remains a mystery. 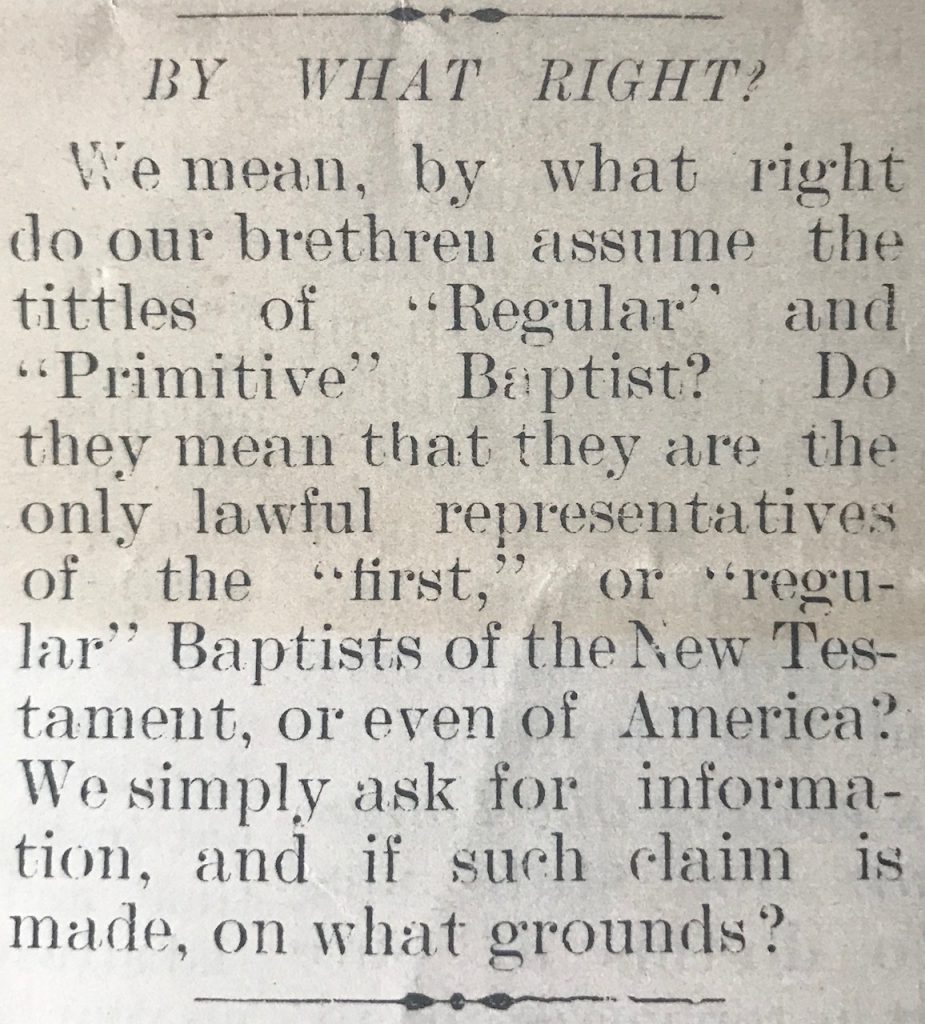 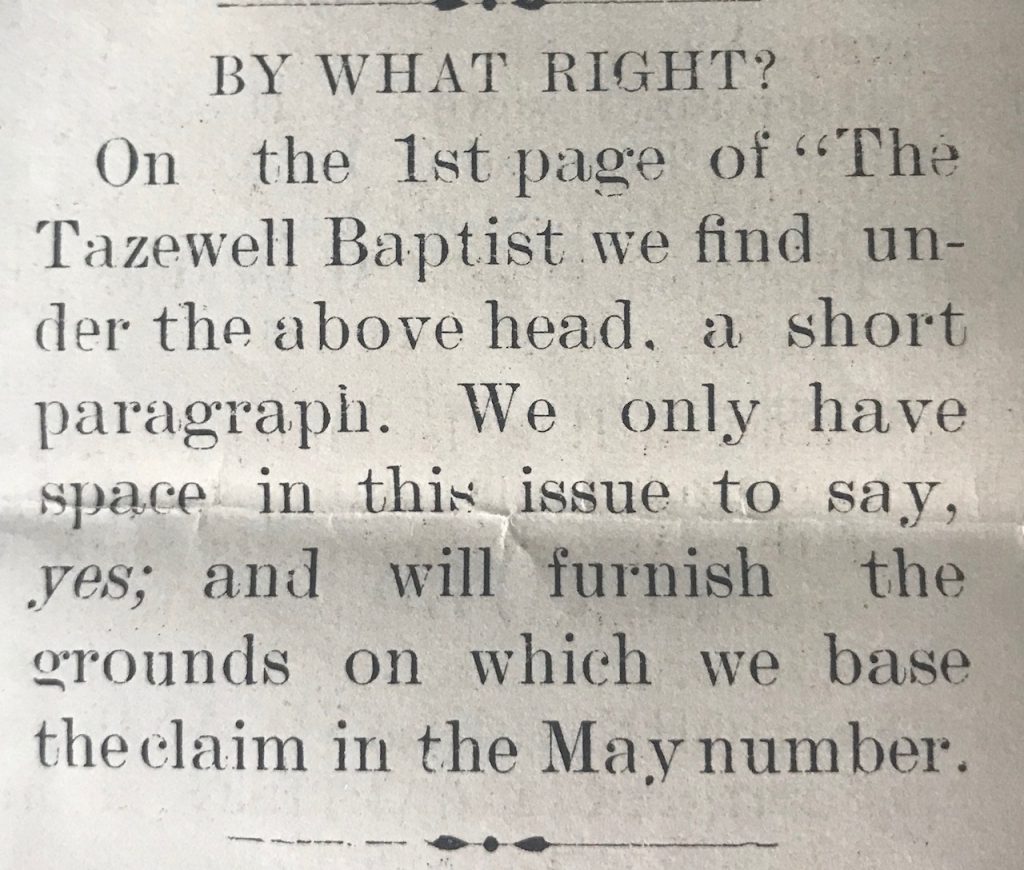 Left, The Tazewell Baptist posed the question “By What Right?” On the right, The Primitive Baptist responded.

While it is unknown how long the debate endured between the two Baptist newspapers, both Leslie and Harman went on to publish local weeklies. In 1896, Leslie and his son, W. Bland Leslie, purchased the Clinch Valley News, publishing it together until the former’s death in 1932. The Leslie family continued to operate the paper until 1961. After successive jobs as editor at various newspapers, Harman founded and edited the Tazewell Republican in 1892, but was replaced within a year by W. I. Boone. Later, Harman became Commonwealth’s Attorney for Tazewell County, and was elected State Senator in 1901; he was also a member of the Virginia Historical Society and authored Annals of Tazewell County, Virginia, a two-volume history and genealogy of Tazewell County which can be found in the Library’s collection.