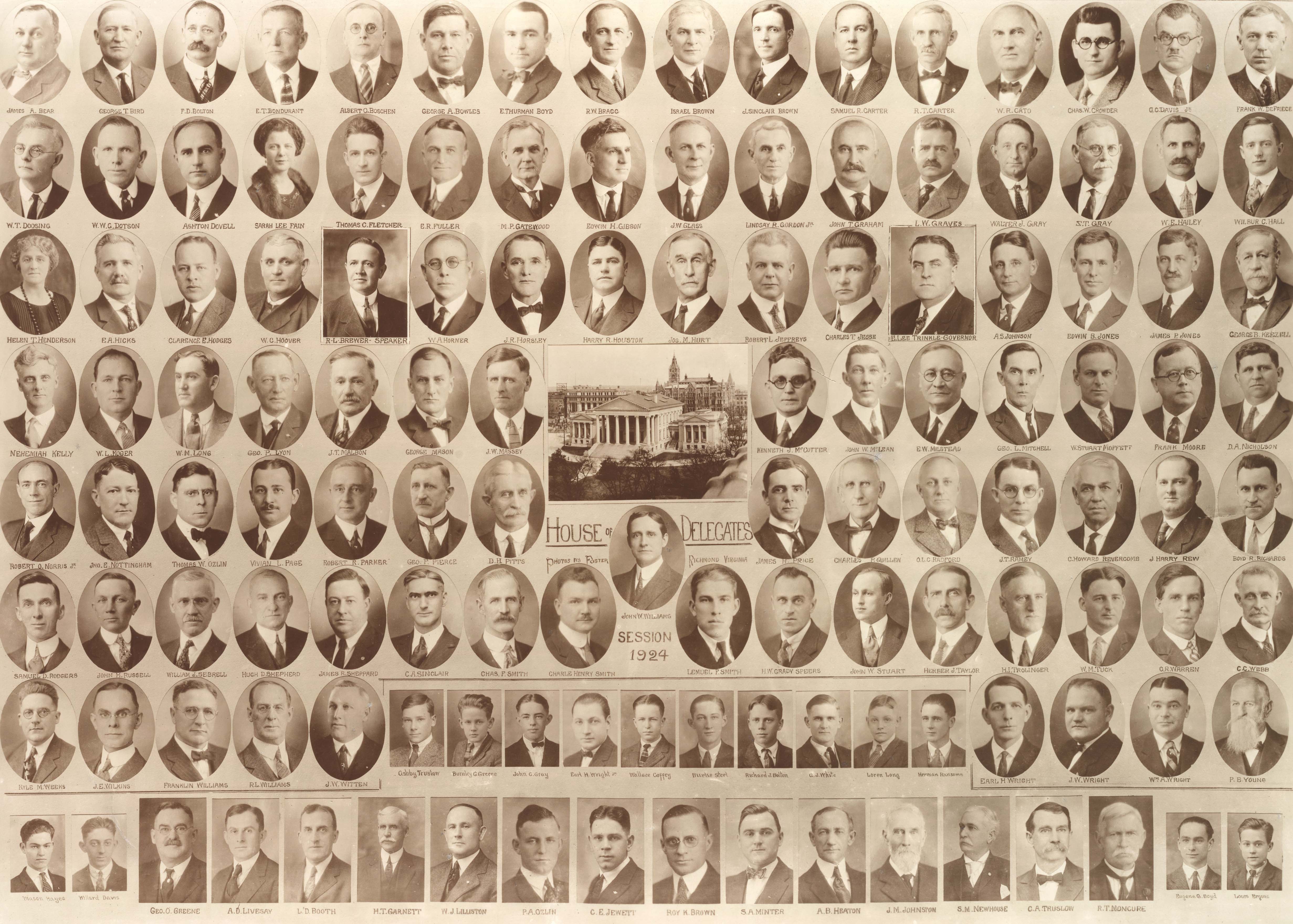 “Legislative Debutantes”: 95 Years of Women in Virginia’s House of Delegates

In 2018 a record number of women took their seats in Virginia’s House of Delegates, bringing the total number of women who have served in that body to 91. The women who inaugurated this small (but growing) group were elected 95 years ago, on 6 November 1923. On that day, Helen Moore Timmons Henderson of Buchanan County and Sarah Lee Oden’hal Fain of Norfolk became the first women to win election to the General Assembly. Women in Virginia had gained the right to vote and run for office three years earlier, when the Nineteenth Amendment was ratified in August 1920. Tens of thousands of women registered and voted that fall thanks to special legislation the assembly had passed in January 1920. 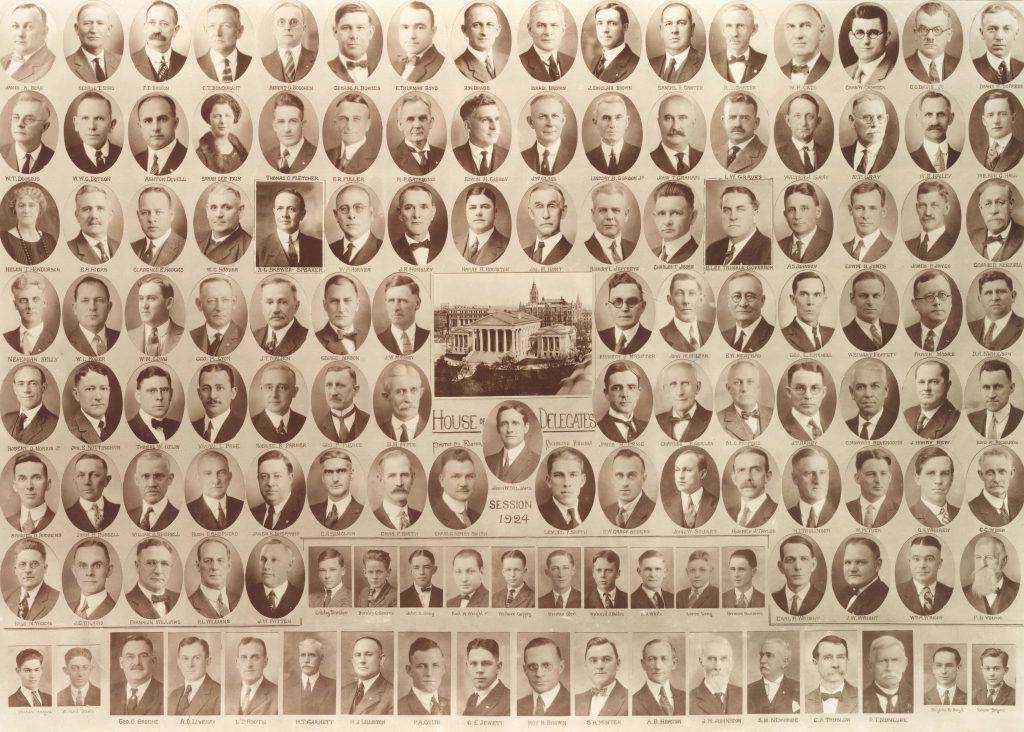 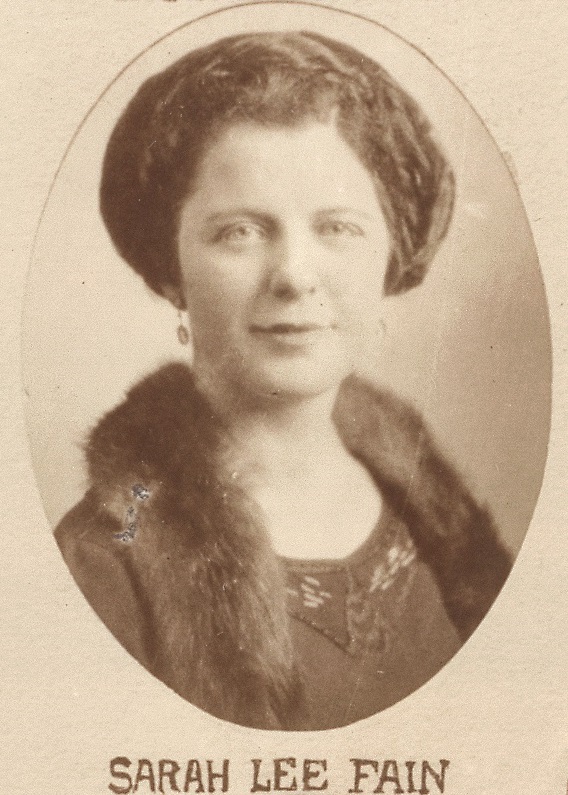 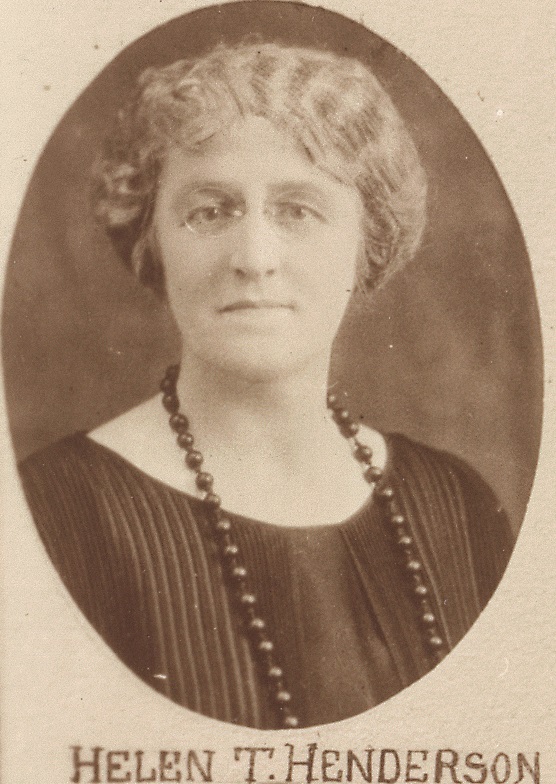 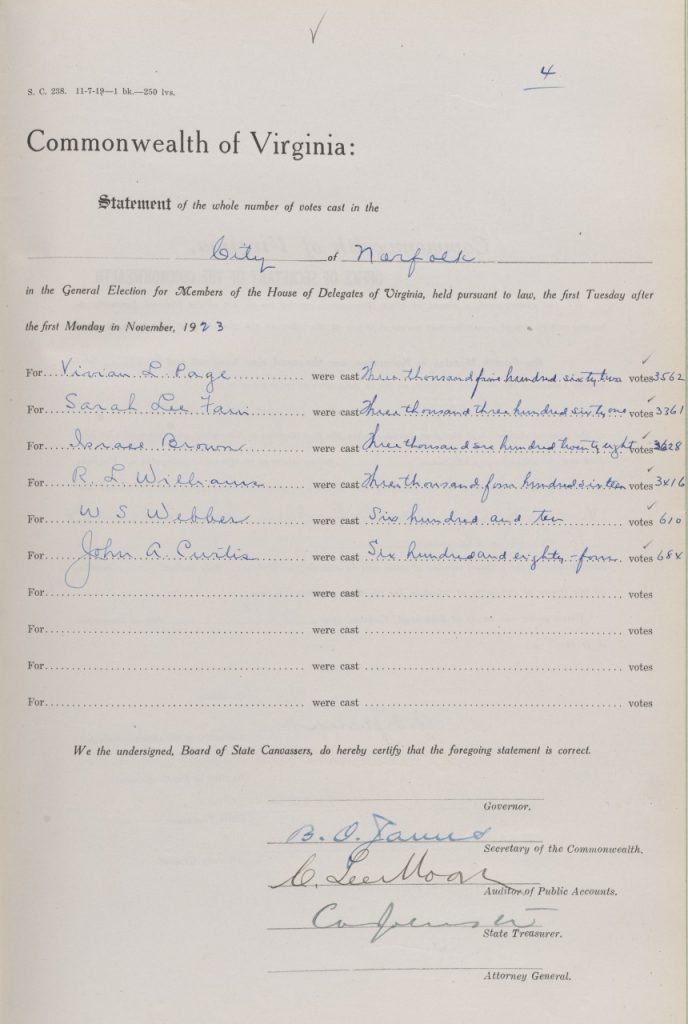 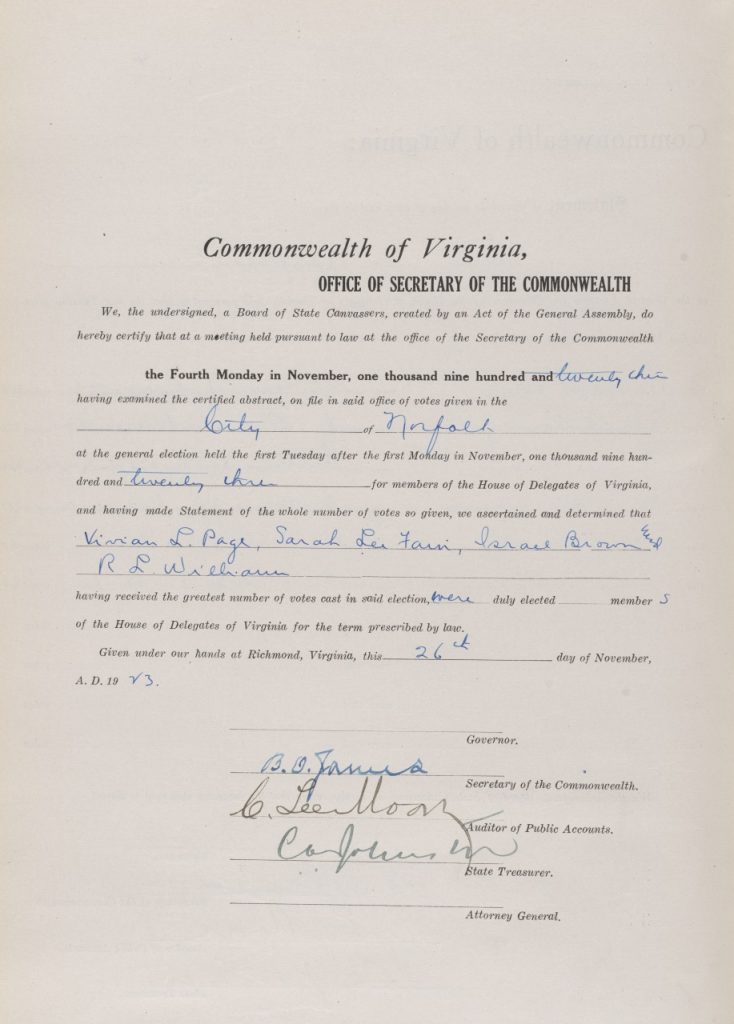 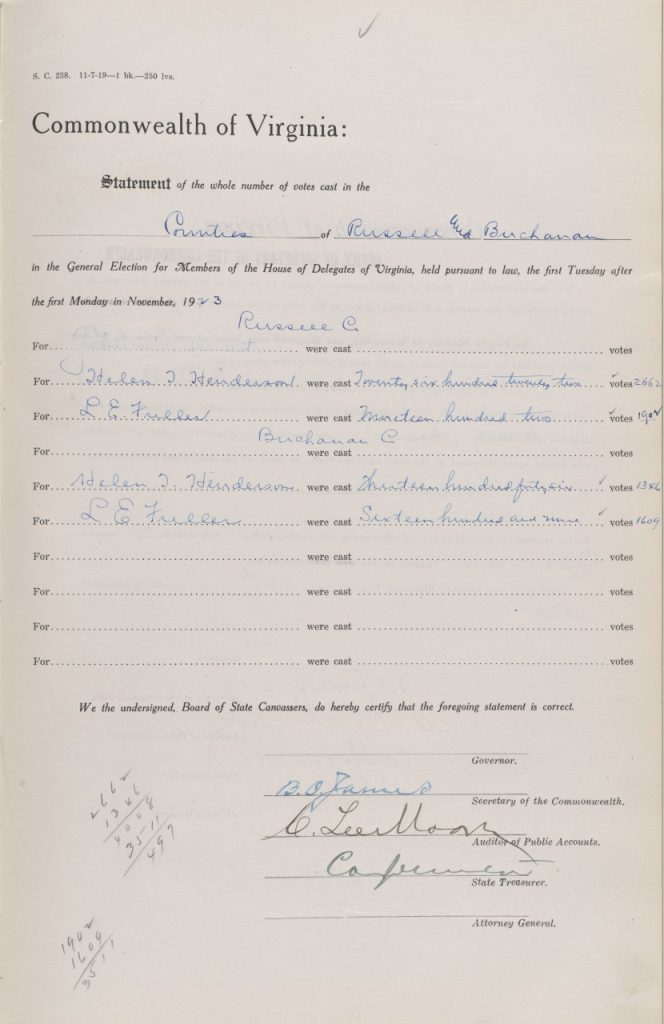 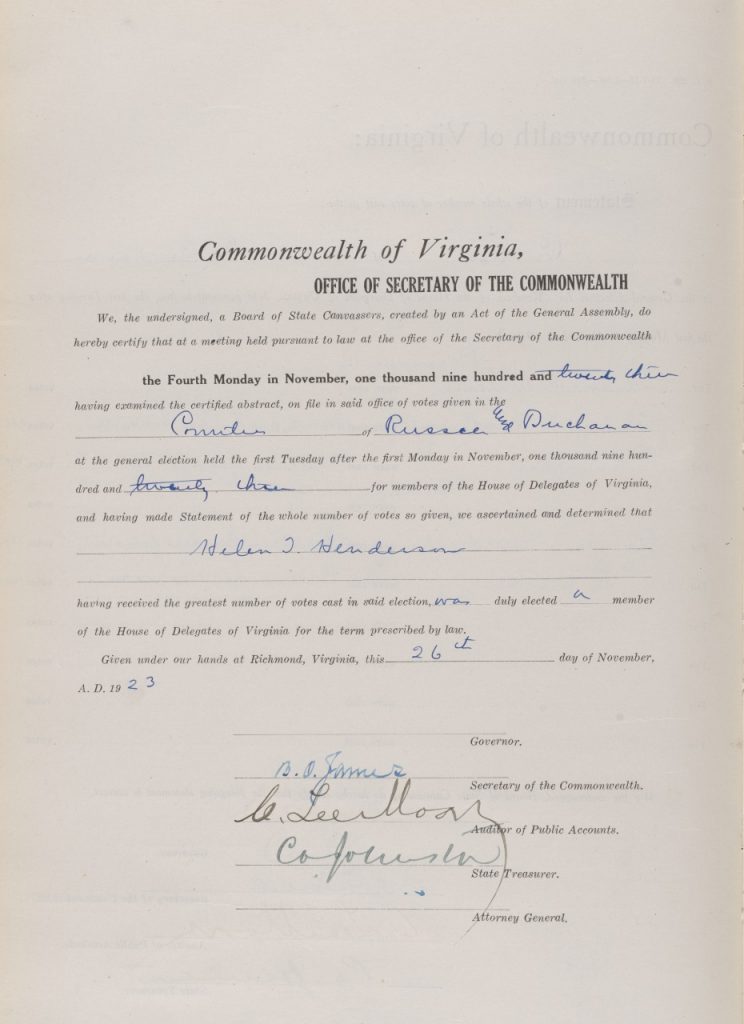 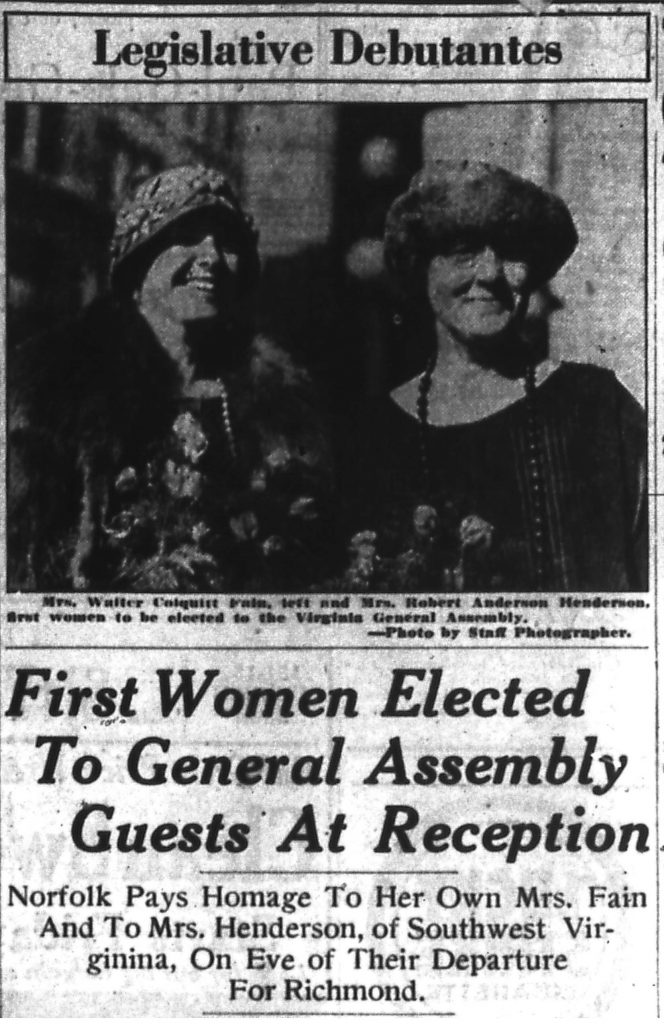 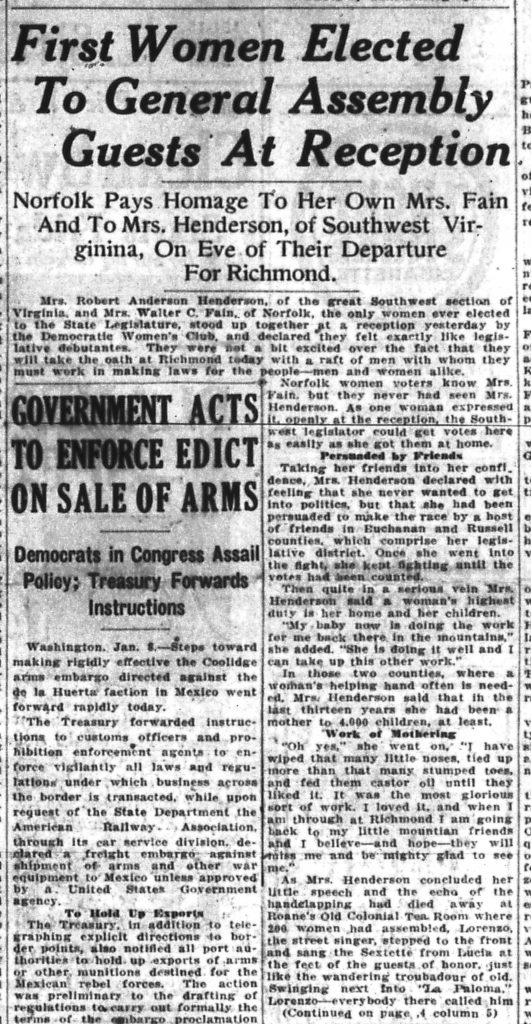 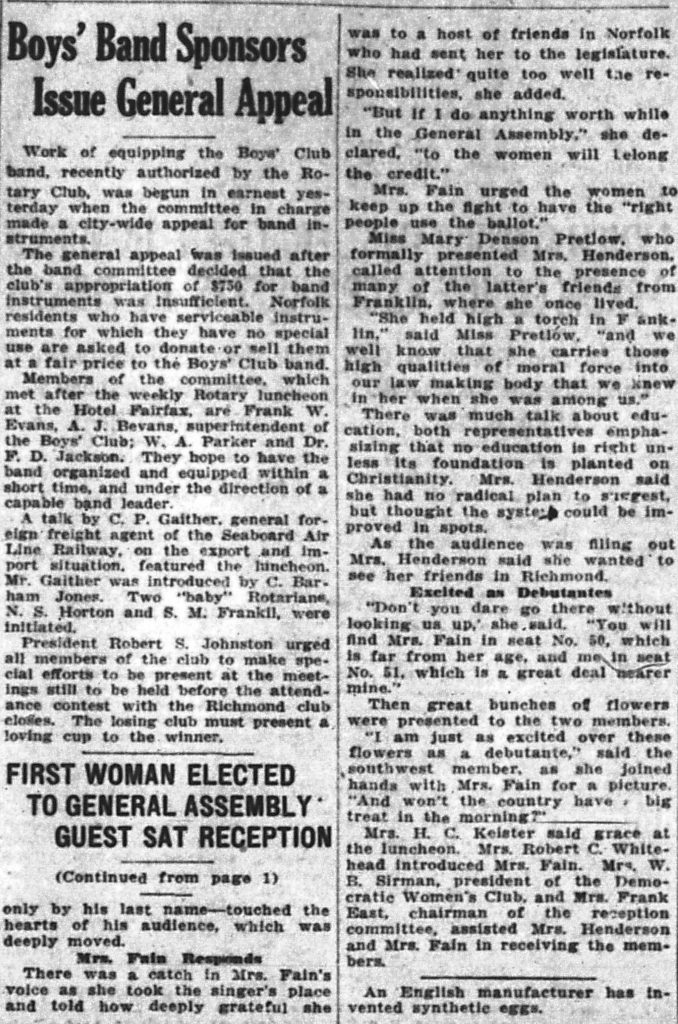 Virginia women were quick to jump into politics as candidates for office. In 1921 at least six women entered races for the House of Delegates. Two lost in Democratic Party primaries. Election statements in the Secretary of the Commonwealth records (available for research at the Library with a finding aid in the Manuscripts Room) show that four other women were defeated in the general election. Three women also ran for statewide office that year and lost: Maggie Lena Walker was the candidate for State Superintendent of Public Instruction on the “lily black” Republican ticket, Elizabeth Lewis Otey was the candidate for the same office on the “lily white” Republican ticket, and Lillie Davis Custis was an independent socialist candidate for governor.

Women broke through in 1923, however, with the victories of Henderson and Fain. Helen T. Henderson (1877–1925) was operating a Baptist mission school with her husband in mountainous Buchanan County when the local Democratic Party nominated her for a seat in the House of Delegates representing Buchanan and Russell Counties. After campaigning for two weeks, Henderson defeated her opponent with 53 percent of the vote. Sarah Lee Fain (1888–1962) was a former teacher who was assisting her husband in managing his business when she was victorious in the Democratic Party primary in Norfolk. In November she came in fourth to win election as one of the city’s four seats in the House of Delegates.
When Henderson and Fain took their seats as members of the House of Delegates in the assembly session that began on 9 January 1924, they became celebrities in Richmond with newspaper reporters following them around the Capitol and flower bouquets at their desks. They were feted with a welcoming dinner hosted at the Commonwealth Club by numerous women’s organizations, and received many invitations to speak to groups across the city. Fain and Henderson attended a reception hosted by the governor’s wife in honor of the wives of the General Assembly members, but there is no evidence that their husbands were invited as legislative spouses. Although they were not the first women in the United States to serve in a state legislative body, Virginia newspapers deemed their victories especially significant because they were the first female legislators to win seats in the nation’s oldest legislature.

During the session, Henderson and Fain proposed a variety of legislation to benefit their constituents. Fain’s bill authorizing localities to provide free textbooks to the public schools did not pass, but she was successful in helping secure legislation allowing the State Corporation Commission to regulate the Virginia Pilot Association’s maritime monopoly. Henderson introduced a bill to create a new circuit court for Buchanan and Tazewell Counties, which passed the House of Delegates but died in the Senate. She was credited with persuading the State Highway Commission to improve the road across Big A Mountain between Buchanan and Russell Counties. Both women earned reputations as able and conscientious legislators.

Helen Henderson was nominated for a second term in 1925, but she died unexpectedly before the election. Sarah Lee Fain won reelection to two more terms, serving until 1928. After Fain and Henderson’s 1924 terms, four more women—Sallie Cook Booker, Nancy Melvina Caldwell, Helen Ruth Henderson (Helen T. Henderson’s daughter), and Emma Lee Smith White—won election to the House of Delegates in the 1920s. However, no women served in the General Assembly between 1934 and 1954, when Kathryn H. Stone of Arlington once again ushered in a series of female legislators in Virginia. Since then the percentage of women has fluctuated in the House of Delegates, and the electoral achievements of women in Virginia early in the 21st century was below the national average. In 2012 Virginia ranked 40th in the nation for the number of women holding office at the state and national level. As of 2018, Virginia is 22nd in the nation, and women hold 28 percent of the seats in the House of Delegates. The U.S. Census Bureau estimates that women constitute 51 percent of Virginia’s population. As more and more women continue to enter politics, the number of female officeholders in Virginia may eventually equal their share of the population.

As part of an upcoming exhibition at the Library of Virginia to commemorate the centennial of woman suffrage in 2020, the Dictionary of Virginia Biography is publishing online biographies of suffrage advocates and the first women to serve in the General Assembly. Biographies are being added regularly, so please check back often for new entries.