The Cost of Freedom: A Campbell County Story

The Campbell County court ordered the sale of Louisa Alexander and her daughter, Eliza, because as enslaved persons, Virginia law considered them part of Louisa’s deceased husband’s estate. After William Alexander, Sr., a free person of color, died, John P. White sought payment of a debt that he claimed Mr. Alexander owed him. The Campbell County chancery cause Louisa Alexander & etc. vs.  John P. White, 1852-017, lays out the Alexanders’ tale.
Louisa told a different version of her life story. She called White’s claim of a debt owed by her husband fraudulent. She said that for many years she and Eliza had also been free persons of color. Louisa claimed that she and William had moved to Maryland, lived there for a while, and then moved back to Wythe County, Virginia, before his death. Louisa and Eliza then moved to Campbell County. The Campbell County sheriff, on White’s word, had already advertised their sale to the highest bidder at auction. Establishing their freedom became an urgent matter.
An injunction was filed on her behalf to halt the sale until the suit could be settled.

Louisa further claimed that she had never been her husband’s property, but had been sold to William Alexander, Jr. Young William then carried her and her daughter into the state of Maryland and sold them to James Selden, contrary to the laws of that state. By the illegal sale in Maryland, she and Eliza became entitled to the rights of free persons.

Her attorney filed with the suit a court document from Baltimore, Maryland, stating that she, Eliza and two other children were entitled to their freedom.

White countered by saying that Louisa’s story was untrue, and that the document from Maryland falsely stated that she Alexander Jr. owned her rather than Alexander Sr. White argued that she was the property of Alexander, Sr., who was also the one who had carried her into Maryland. He further elaborated by saying he believed it was a “fraudulent trick to screen Louisa and her children from the claims of his [the elder Alexander’s] bona fide creditors.” 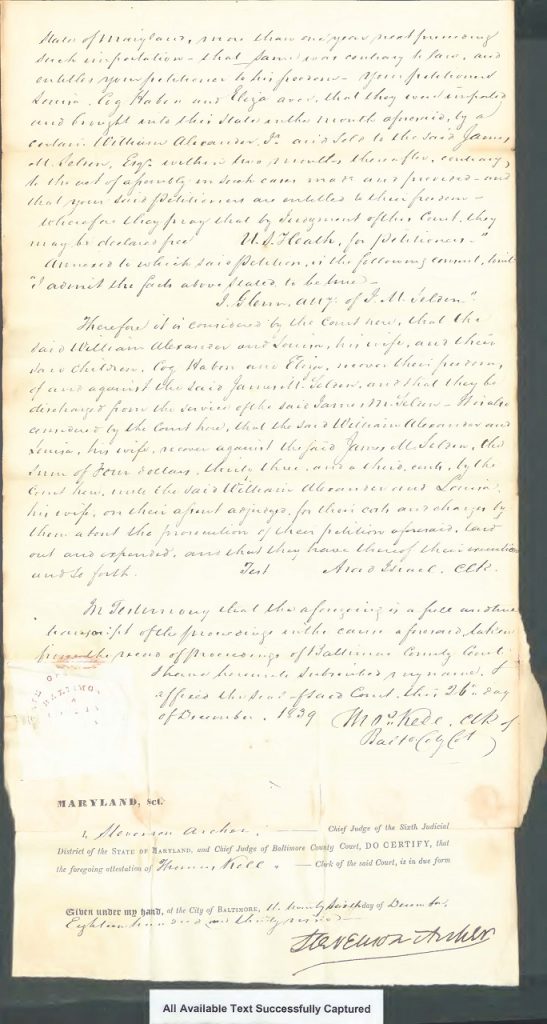 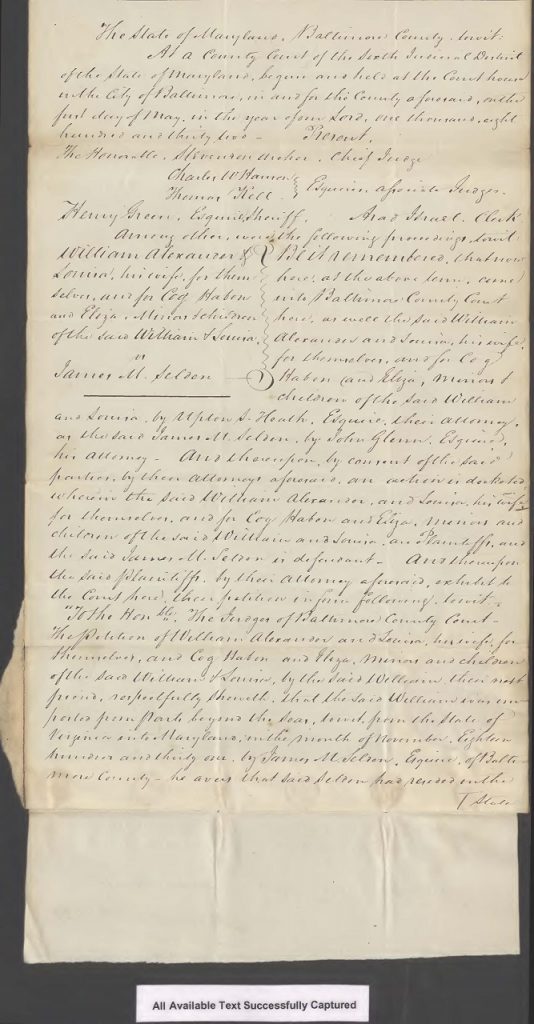 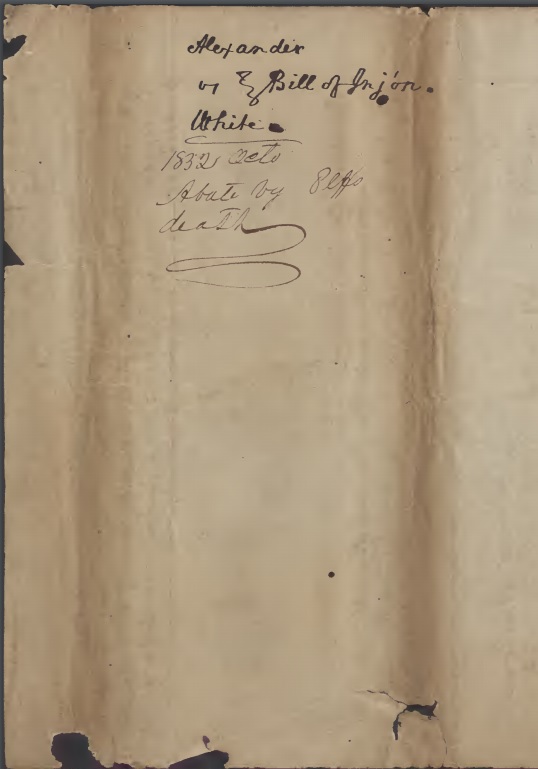 William Wills, a deponent in the case, testified that he had once owned Louisa and her children and that he had sold them to William Alexander, Sr., who paid him “about  five or six hundred dollars” for them.
Additionally, James Selden gave a deposition regarding what he knew about the case. He said he had once owned William Alexander, Sr., and that he had “liberated him about 1834,” while he resided in Maryland. Selden claimed that he had never owned Louisa or Eliza and that he knew nothing of the Maryland document. He said if his name was used as a defendant in that petition, it was without his consent and knowledge.

These records tell a story to which there is no satisfactory or clear conclusion. The final docketing note from October 1852 says, “Abate[d] by the [plaintiff’s] death.” We do not know from the documents how and if the case was ever resolved and in whose favor. The laws of Virginia at the time would not have been favorable toward Louisa and Eliza. Many free African Americans, when they were able to do so, bought spouses and relatives in an attempt to protect and preserve family. This case points to the complications and tragedies that affected the lives of enslaved African Americans in 19th century Virginia.