From Lancaster to Lunenburg: Betty Chapman’s Story in Virginia Untold 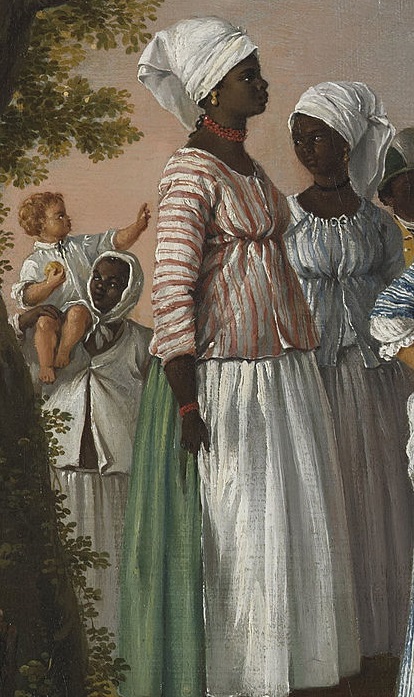 In 1788, the Virginia General Assembly reformed the state judicial courts in order alleviate congestion in the General Court, which had caused unreasonable delays in the adjudication of common law cases such as repayment of debts, slander, land disputes, and fraud. They divided the Commonwealth into eighteen district courts, each composed of several counties, plus the district of Kentucky. The Brunswick County District Court heard cases originating in the counties of Brunswick, Greensville, Lunenburg, and Mecklenburg until 1809 when the Superior Court of Law replaced the district courts. The Library of Virginia has scanned district court suits involving enslaved and free African Americans heard in the Brunswick County courthouse and made them available through Virginia Untold: The African American Narrative.

Two suits, William McTyiere [McTyre] William v. John Ussory, Jr, 1798 and Betty Chapman, etc. vs. William McTyre, 1800 found in the Brunswick County District Court records tell the story of Betty Chapman. Both suits papers describe her as a “mulatto” living with her family in Lunenburg County. However, her story really begins in the mid-1750s in Lancaster County. Her mother, Winny Chapman, was a free white woman who lived in the home of Robert McTyre. While living there, Winny gave birth to Betty and a sister named Milly, who was also of mixed-race parentage. Betty and Milly grew up in a community where their neighbors regarded them as “bastard children.” The McTyre family treated the siblings as enslaved despite the fact that under Virginia law children born of a free woman were also free.

According to depositions in both suits, Robert McTyre gave Betty to his son, Frizzel McTyre. Deponents from Lancaster County recalled Frizzel taking Betty in a “clandestine” and “underhanded manner” from Lancaster County to Brunswick County when she was eight years old. His actions were “a matter of surprise to the neighbors that he the said Friszel [sic] should be allowed to carry off the sd [said] Betty, as they suspected he would make a slave of the said Girl.” McTyre later moved to Lunenburg County where Betty grew up enslaved and had at least nine children who Frizzel McTyre also enslaved.

In 1777, Betty filed a petition in Lunenburg County Court seeking the court’s assistance to release her from “servitude” to Frizzel. The court ordered Betty to be “discharged” from Frizzel in 1779; however, it appears Frizzell refused to abide by the court’s ruling. About fifteen years later, Frizzel’s son, William, filed suit in the Brunswick County District seeking to reclaim Betty and her children from James Ussory, Jr. William informed the court that he had “casually lost the said negro slaves out of his possession.” They ended up in the hands of Ussory, who refused to return them and did not explain the refusal. William offered as evidence of his ownership of Betty and her children a deed written in 1795 by his father Frizzel, now living in Richmond County, Georgia. In it, Frizzel gave his son “one Negro woman Slave named Betty who now pretends to be free and Calls herself by the name of Betty Chapman, together with all the increase or issue of the Body of her the said Betty Chapman she and they being before the signing & sealing hereof my proper Slaves and descended from Slaves and no other and held by me under the last Will & Testament of my late father Robert McTyiere of Lancaster County.” In 1798, the District Court ordered Ussory to return Betty and her children to William.

While the District Court was hearing McTyiere [McTyre] v. Ussory, Betty Chapman filed suit in the District Court against William McTyre to win freedom for her and her children. She sued on the basis that her mother was a free woman. Several residents of Lancaster County, ranging in age from 60 to 80, offered testimony on events that took place forty years earlier: Betty’s mother being a free white woman; Betty’s mixed-race parentage; and how she was carried away at age eight by William’s father. Based on their testimony, the jury awarded Betty and her family their freedom in 1800. 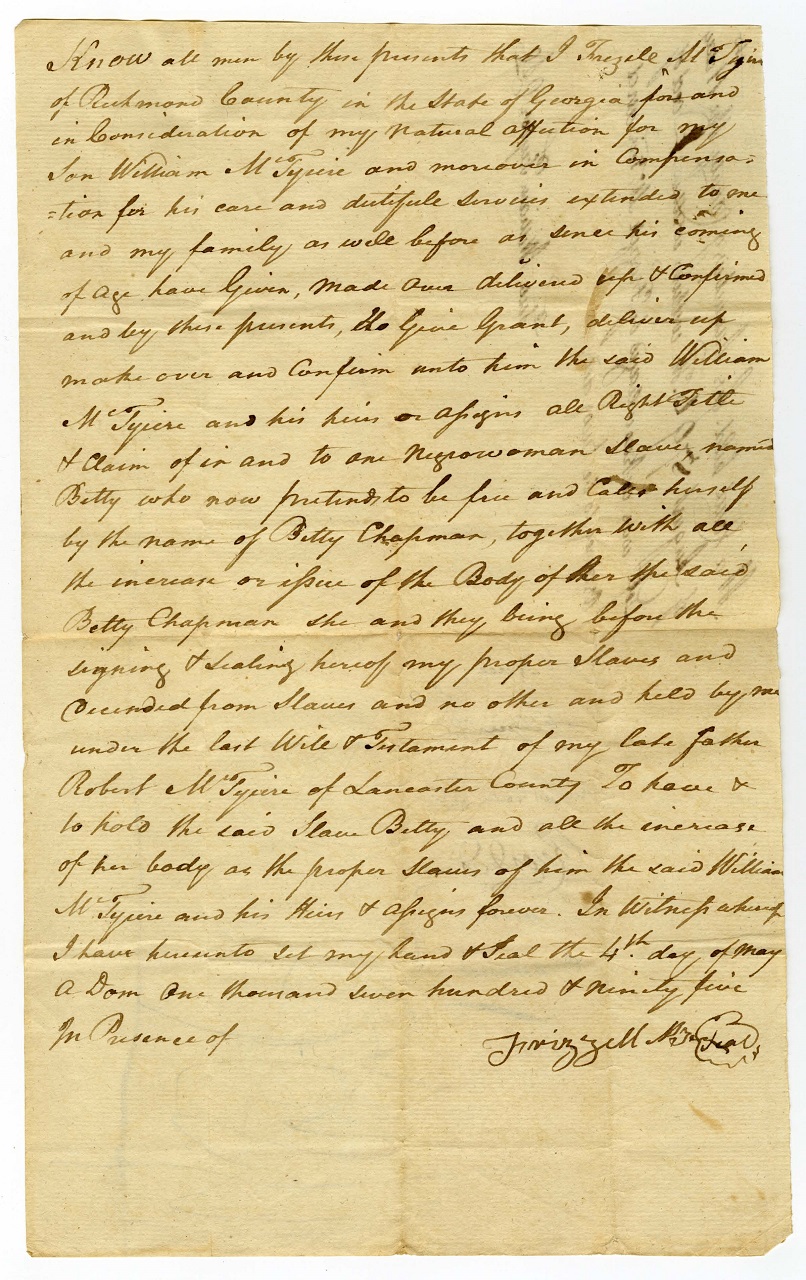 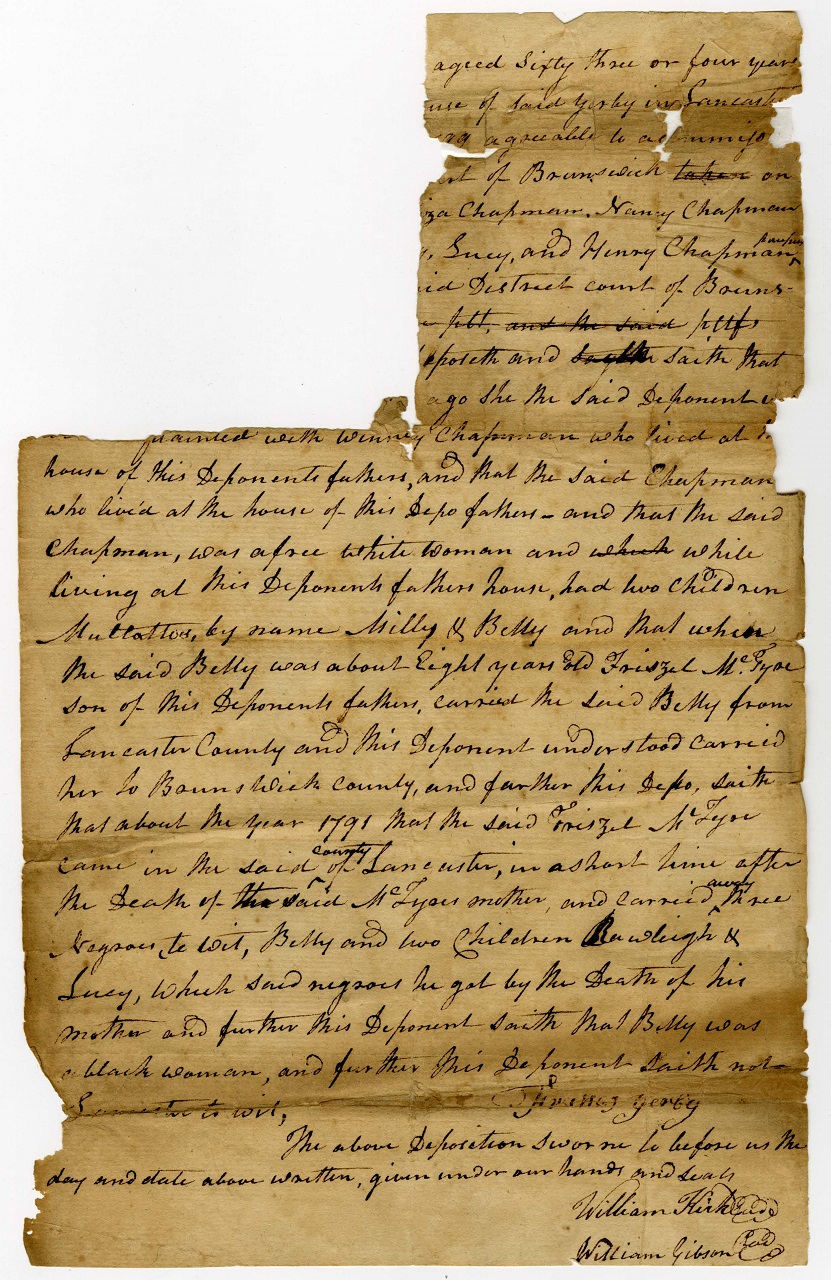 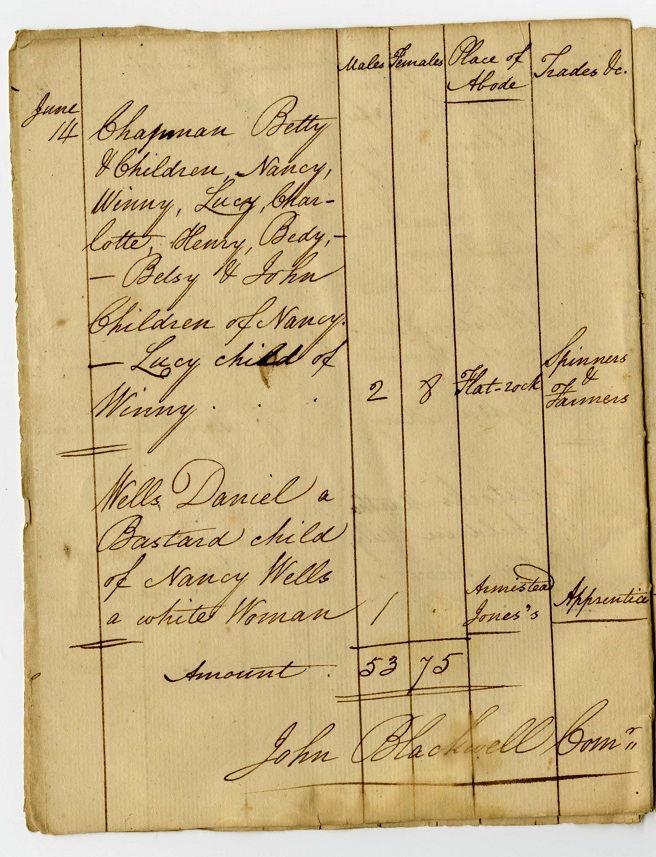 Unlike the Lunenburg County Court decision twenty years earlier, the district court decision was enforced. After decades of enslavement, Betty Chapman succeeded in gaining freedom from the McTyre family for herself and her descendants. Additional records found in Virginia Untold corroborate this fact. The Lunenburg County “Free Negro” and “Mulattoes” lists for 1802 and 1803 include Betty Chapman, her children, and grandchildren.

Betty Chapman’s life is a remarkable story of overcoming tremendous adversity. She grew up in the 18th century with dual scarlet letters– an illegitimate birth and racially mixed parentage. Taken from her mother at a young age, it is possible that she never saw her again. Betty held on to her mother’s memory by naming one her daughters Winny. She lived most of her life illegally enslaved, but believed she had won her freedom in 1779 only to have the court’s orders ignored. Despite decades of undoubted hardship and misfortune, Betty Chapman’s iron will and perseverance finally won her and her descendants their freedom.

More stories like Betty Chapman’s await retelling in Virginia Untold. We encourage you to explore the records and share those accounts with us through our social media sites.

The processing of local court records found in Virginia Untold was made possible through the innovative Circuit Court Records Preservation Program (CCRP). The CCRP is a cooperative program between the Library of Virginia and the Virginia Court Clerks Association (VCCA), which seeks to preserve the historic records found in Virginia’s circuit courts. The scanning, indexing, and transcription of the records found on Virginia Untold were funded by Dominion Resources and the Library Services and Technology Act (LSTA) administered by the Institute of Museum and Library Services (IMLS).