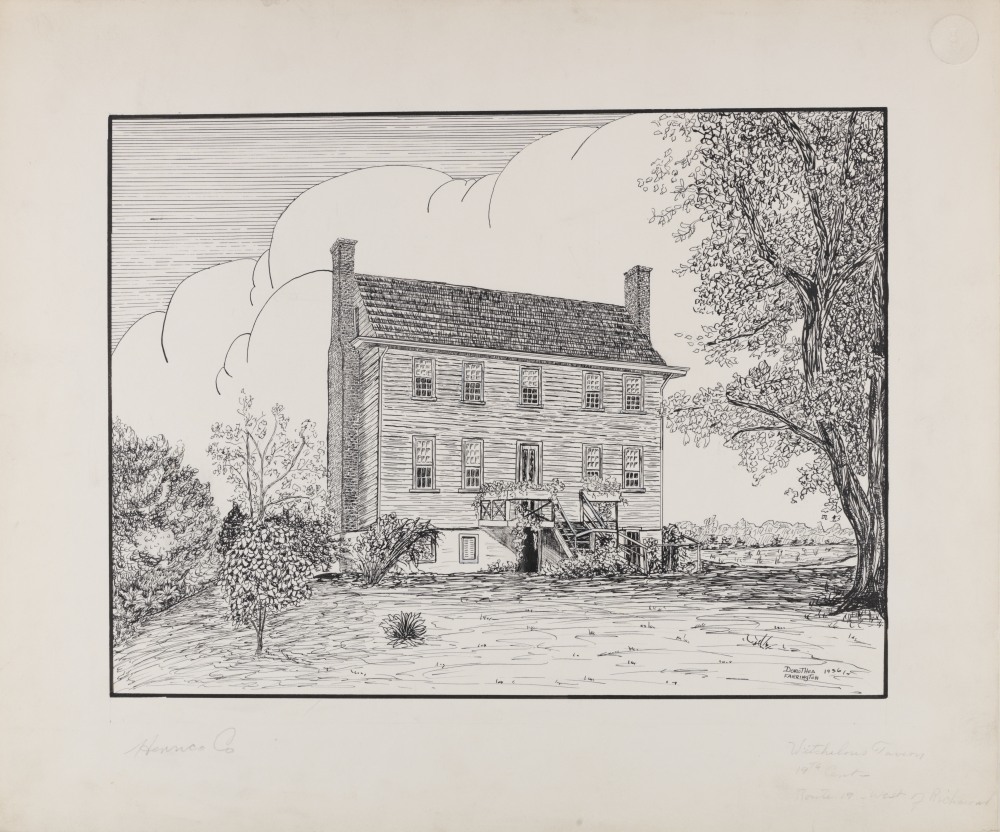 The Man Who Killed Richard Whichello: A Henrico County Legend

At the end of the 1962 John Ford classic The Man Who Shot Liberty Valance, a reporter remarks, “When the legend becomes fact, print the legend.” The legend of Richard Whichello’s murder in April 1850 persists today, but it is precisely that, a legend. The persistent tale raises questions about collective memory and how stories color our recollection of the past. Like Ford’s archetypal Western, this tale also includes a horse, but let us begin at the beginning.

Whichello Tavern, also known as “Tall House,” sits on property in Henrico County once owned by the Randolph family of Tuckahoe. The land passed from a Frenchman named Druin down through his daughter and granddaughter (Catherine Woodward and Eliza Ann Woodward Winston, respectively) until  Richard Whichello bought it in 1838.

Whichello, who opted to open a rest stop for travelers heading to and from Richmond, has been characterized in lore as a miserly, abusive card-cheat, which makes him a much less sympathetic murder victim. The oft-repeated legend tells of a cattle drover, flush with cash after selling his herd in the city, who stopped at Whichello’s for rest and refreshment. The ne’er-do-well owner talked the boastful cattleman into a card game and swiftly relieved him of his riches. The cheated drover opted to stay the night to sleep off his bender and lick his wounds. The next morning, Whichello was found in his bed bludgeoned to death with an axe, and the drover was gone.

Adding extra sizzle to this tale was the whereabouts of Whichello’s horded treasure, including the drover’s dough. The treasure, along with the deceased Mr. Whichello, were supposedly buried under the tavern’s hearth to avoid discovery, with the latter haunting the place to scare off treasure hunters. The valuables were buried inaccessibly for obvious reasons, but Whichello, it is said, was placed there to avoid post-mortem pummeling by the people that he enslaved, as reprisal for his cruel treatment. Therein may lie the one kernel of truth to this tale. 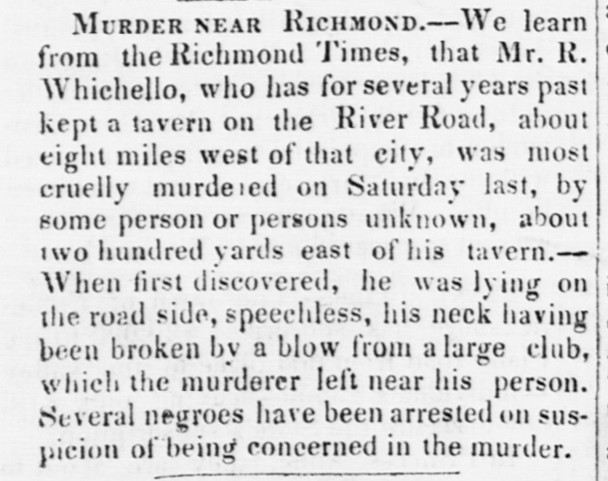 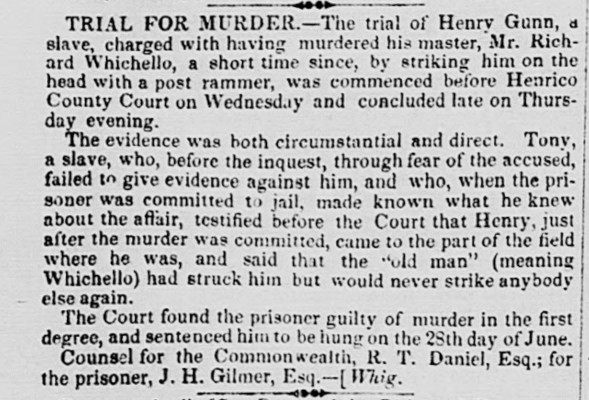 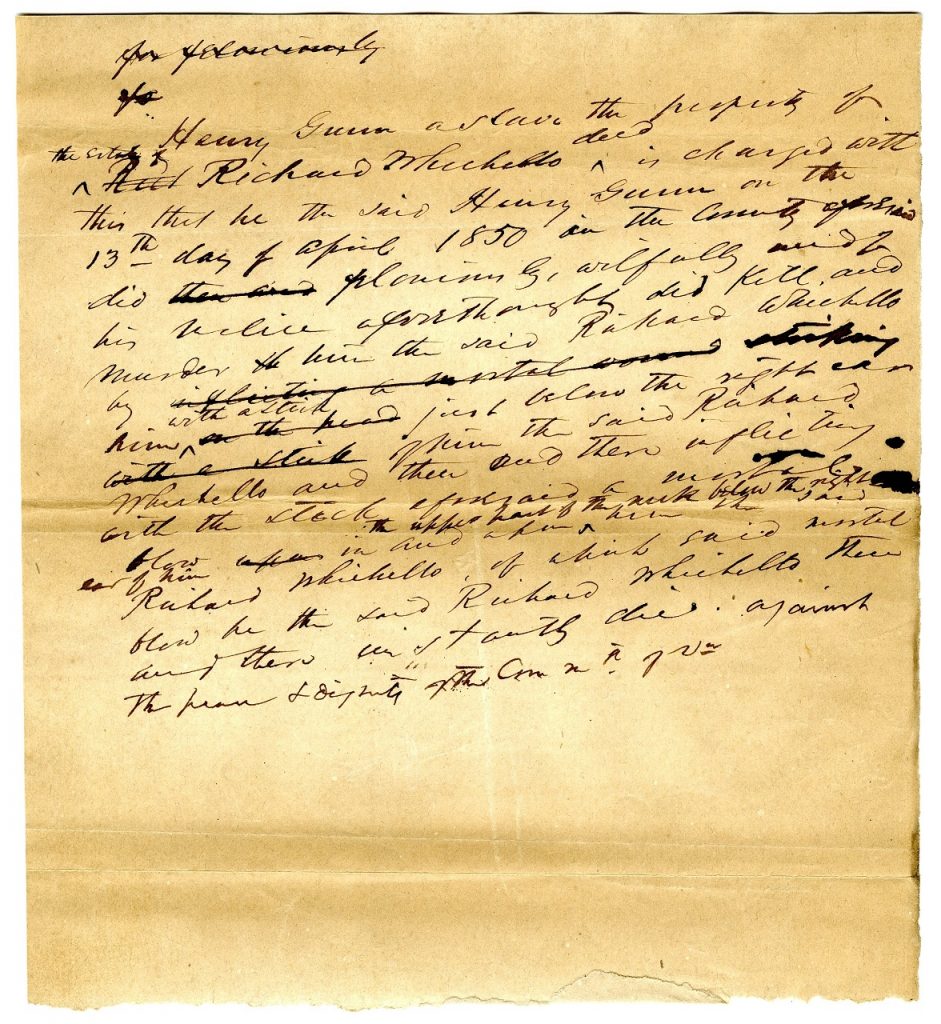 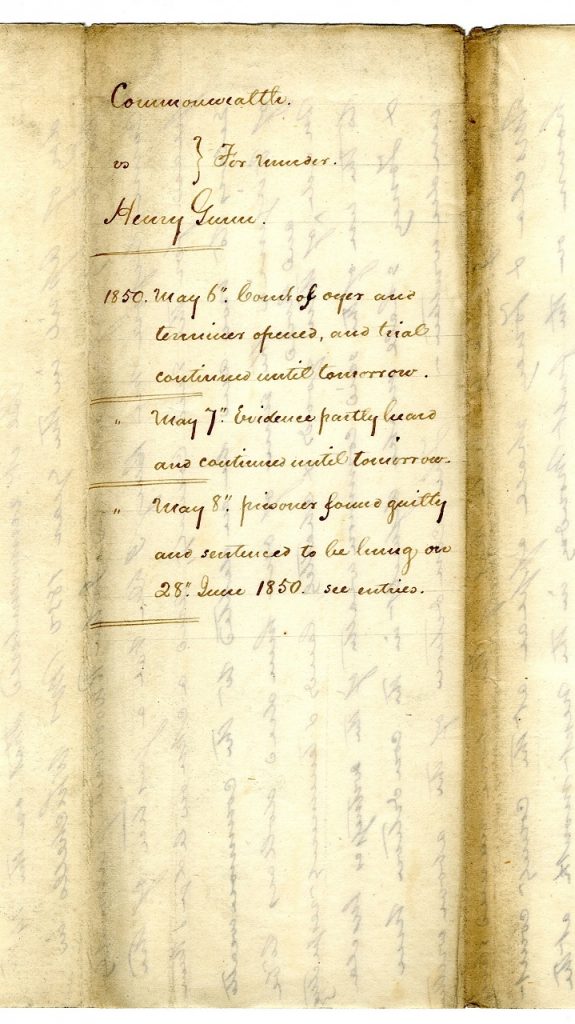 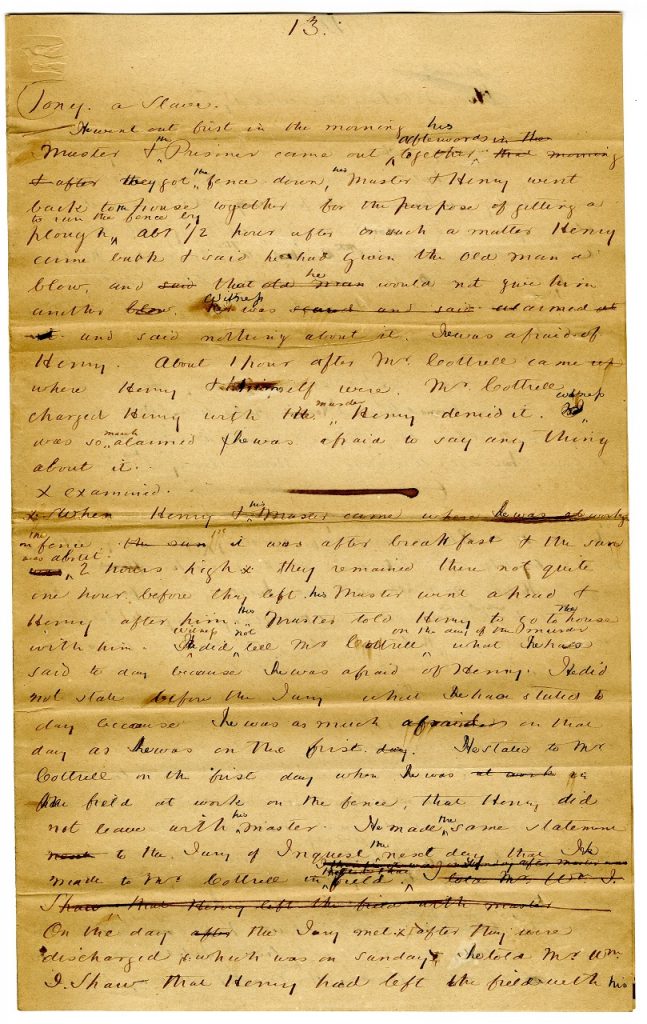 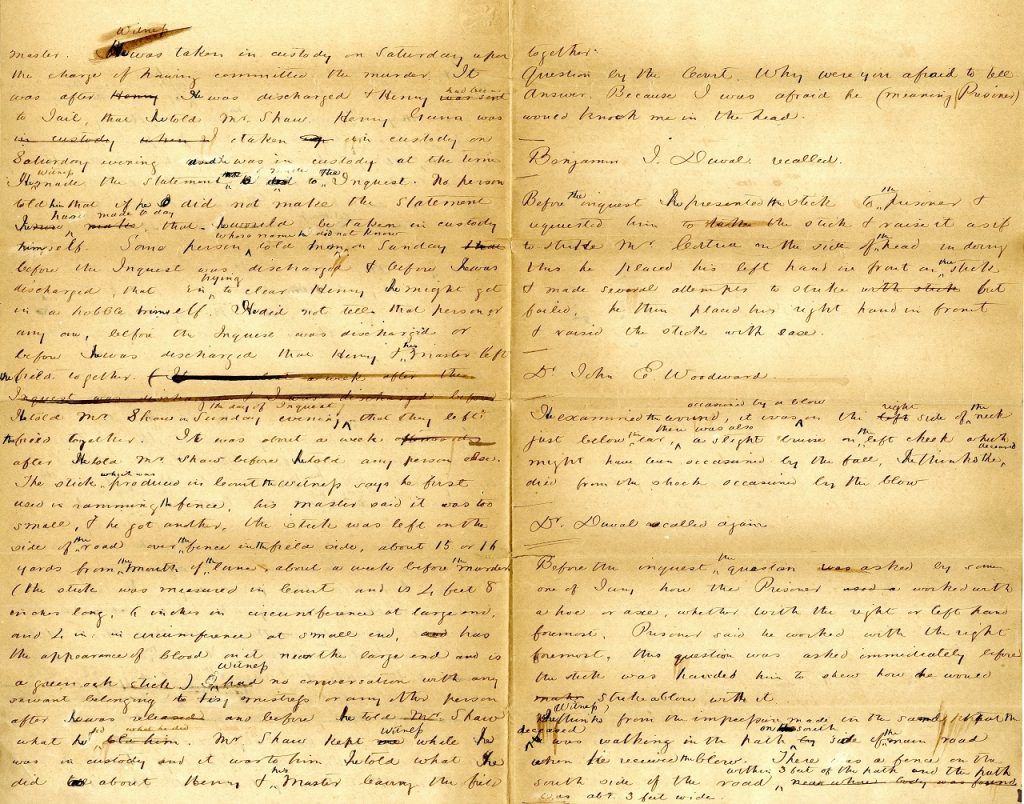 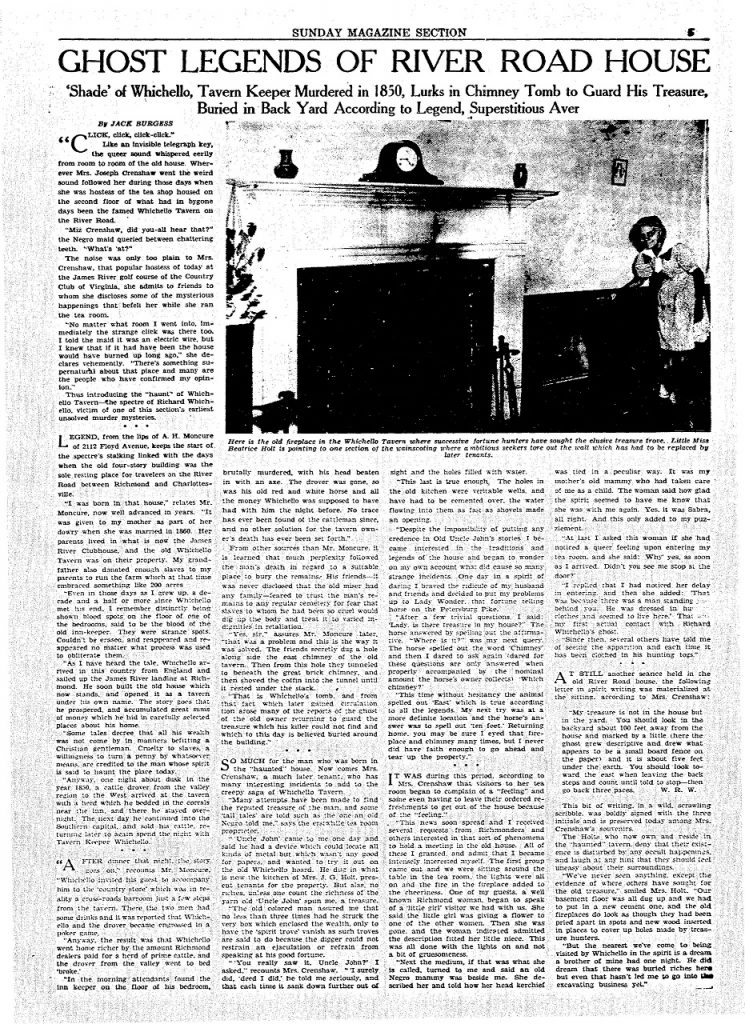 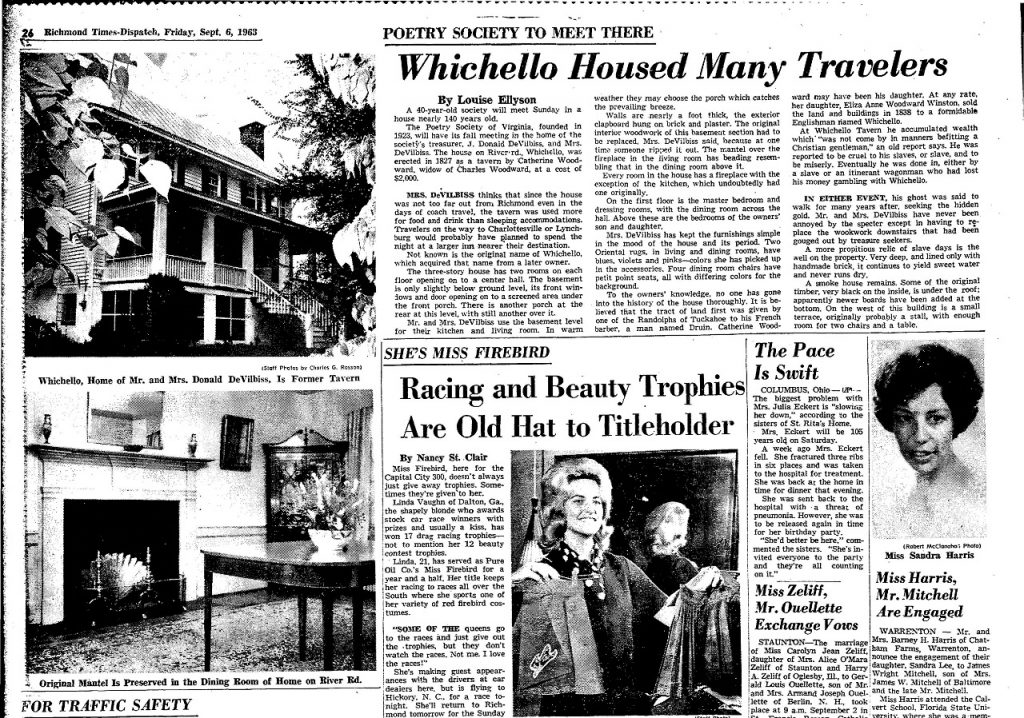 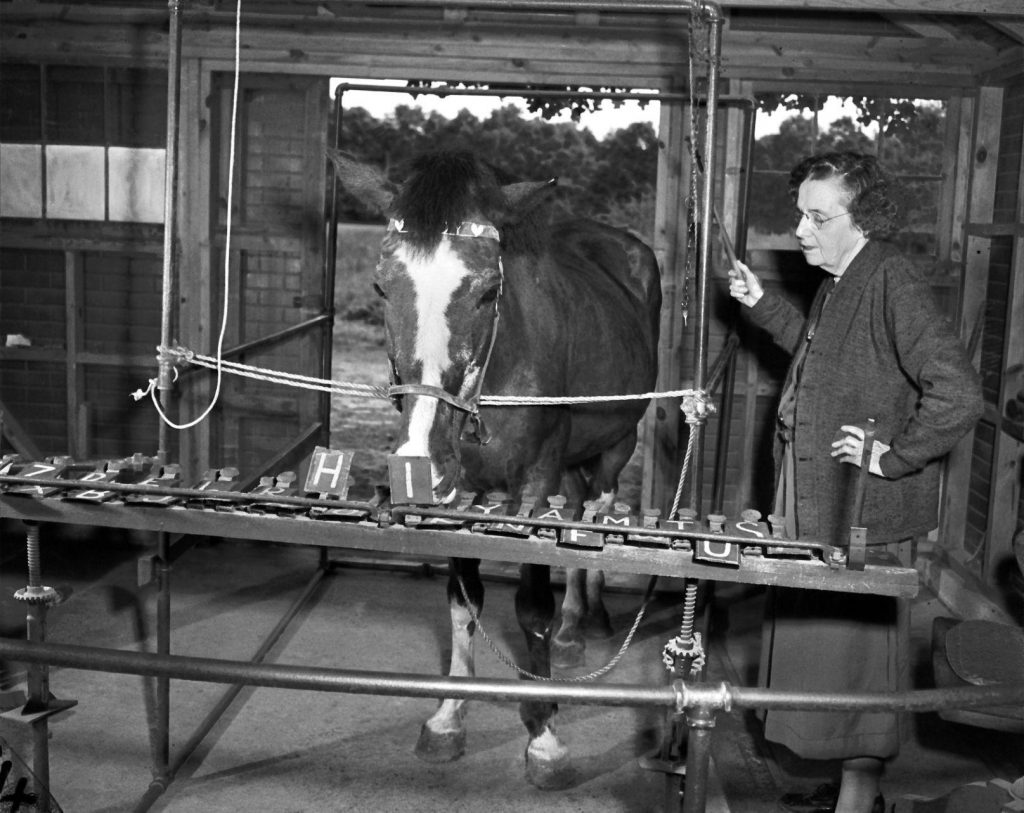 Richard Whichello may indeed have been a cruel slave owner, or he may have simply crossed paths with a man who’d had enough of being enslaved. Whatever the case, it is documented fact that Henry Gunn, an enslaved man, murdered Richard Whichello on 13 April 1850 by striking him with a fence post rammer.

The county coroner convened a coroner’s jury to hear testimony from several people, some of whom were enslaved by Whichello. One woman, Usley [Ursela], claimed to have “frequently heard Henry Gunn say that he would die before he would live with [Whichello].” The jury found enough evidence to call for the arrest of Henry Gunn.

The Commonwealth then brought an indictment against Gunn for the murder on 6 May 1850 in the Henrico County court. Several people gave testimony, including Tony, who was with Whichello (his enslaver) and Henry Gunn the morning of 13 April working on fence posts. Tony had testified at the coroner’s inquest that Henry did not go back to the house (tavern) with Whichello that morning but rather stayed with Tony at the fence. However, it turned out that Tony had fabricated the statement. When asked in cross-examination why he lied, Tony said, “Because I was afraid he [Henry Gunn] would knock me in the head.”

The court convicted Henry Gunn of Richard Whichello’s murder and sentenced him to hang on 28 June 1850. Henry suffered one last indignity after death; on 17 July, the Auditor of Public Accounts reimbursed Richard Whichello’s estate $350 (approximately $10,600 today) for the financial loss it suffered with Gunn’s execution.

Was the story of the cheated cattle drover a more palatable tale than retaliation by an enslaved man? The county court records and newspaper stories detailing the murder have been available to the public for decades, yet the apocryphal story persists. Throwing in treasure and a bizarre burial certainly added to the mystery of the legend.  At what point did the story change? Did it really change? Perhaps it is a tale of retribution either way.

Oh, I almost forgot, the horse. In the 1930s, after years of Whichello’s ghost purportedly guarding his treasure, bumping and jangling through the tavern, then-owner Joseph Crenshaw engaged local celebrity Lady Wonder, the psychic horse, to determine the source of the haunting. The extrasensory equine supposedly spelled out C-H-I-M-N-E-Y and E-A-S-T on her mechanical apparatus. However, Mr. Crenshaw never followed up on the medium mare’s reading.