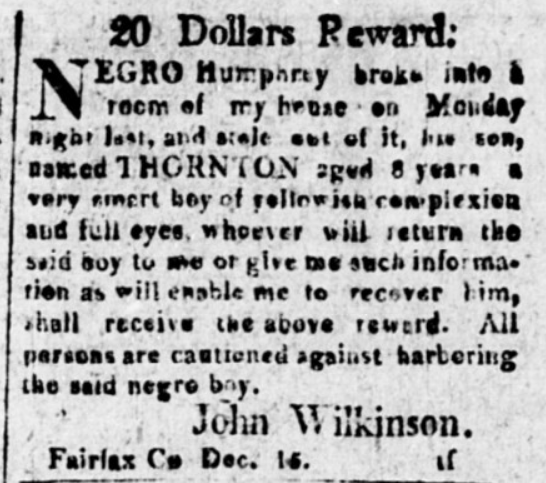 Stealing Freedom: The Fairfax Slave Who Liberated Himself and His Son

By Kyle RogersJune 13, 2019June 24th, 2021No Comments
During my research so far this summer for the Virginia Newspaper department’s continuing project in collaboration with Cornell University, Freedom on the Move, I have already found and collected over one-hundred fugitive slave advertisements from historical Virginia newspapers.  Most notices concerning runaway slaves follow a boilerplate format, but a few particularly unusual and fascinating ads have caught my eye.  The most extraordinary of these were posted in the Alexandria Gazette by one John Wilkinson of Fairfax County, VA, during the winter of 1814: 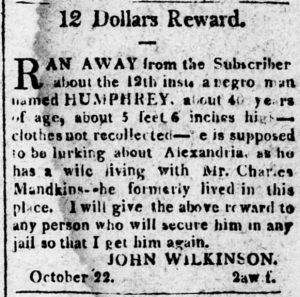 I titled this blog post “Stealing Freedom” in reference to the complex legal significance of slaves’ self-liberation in the early-nineteenth century, when these advertisements were printed.  By law in states where slavery was legal, enslaved Africans were the property of their masters, so for a bondperson, running away was tantamount to stealing oneself.  A forty-year-old slave named Humphrey did just that on or about 12 October 1814, when he ran away from his enslaver John Wilkinson, probably to seek refuge with his wife in Alexandria.  Wilkinson paid the Alexandria Gazette to republish his notice several times, but evidently to no avail; Humphrey had successfully escaped, at least as far as the historical record can confirm.

Humphrey’s self-liberation is, in itself, a historically significant act of resistance to the institution of slavery, but his story grew even more astonishing two months later.  On December 15, Wilkinson posted another advertisement to alert the public that his house had been broken into by none other than Humphrey, his former slave.  According to Wilkinson’s notice, Humphrey had only stolen one thing: his eight-year-old son, Thornton.  Humphrey risked his life not once, but twice, to not only liberate himself but also to rescue his young son from bondage and, thereby, reunite his fractured family.  With these extraordinary acts of courage, Humphrey had also struck a symbolic blow against racial slavery that stands out as one of the most intriguing discoveries of my research thus far.

Unfortunately, the Alexandria Gazette does not reveal the outcome of this fascinating story.  One can only hope that Humphrey and his family were able to avoid capture by Wilkinson and live freely for the rest of their lives.  And perhaps this discovery will encourage another researcher to pursue Humphrey’s story in other, more complete primary sources outside the scope of the newspapers.