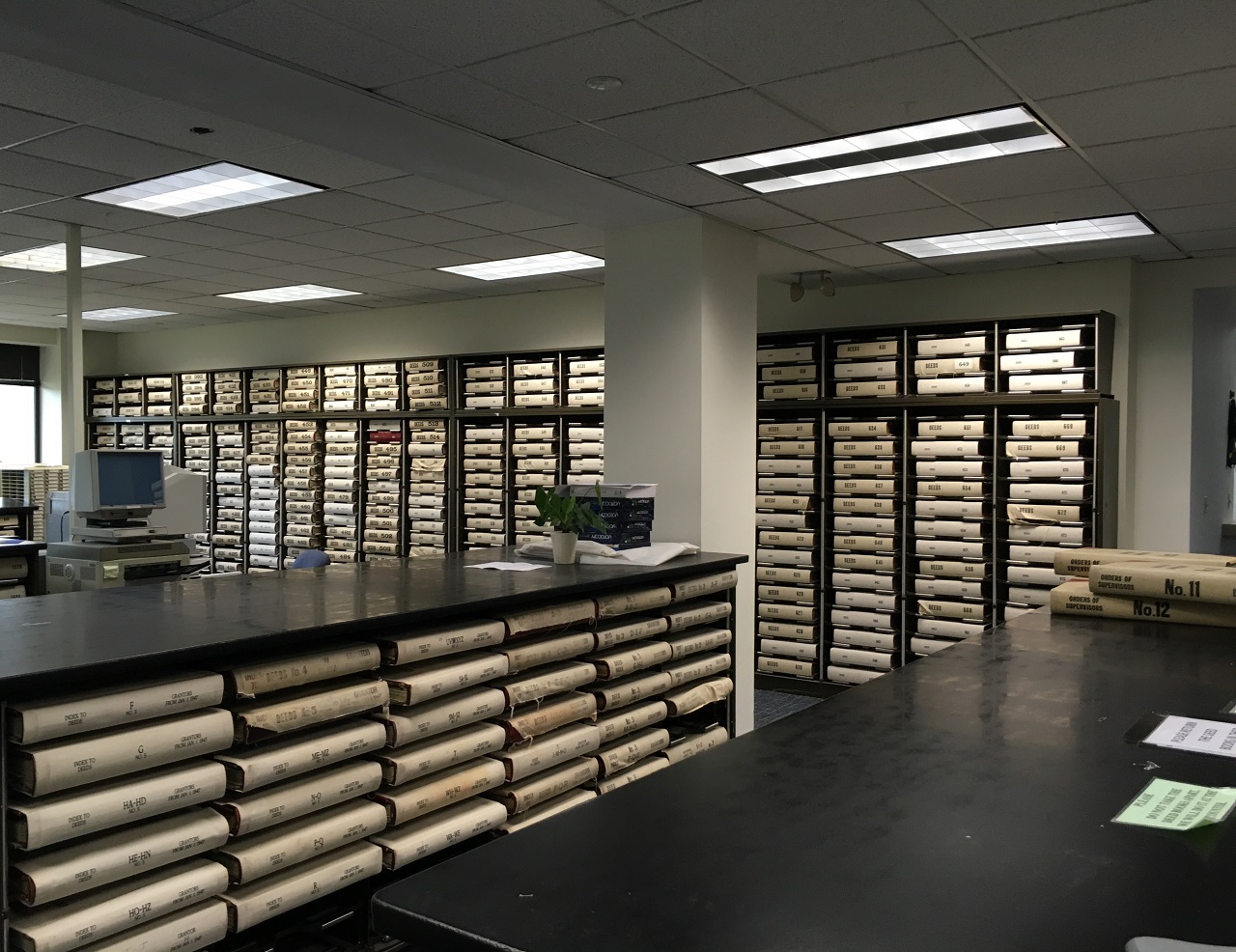 As we have often seen in this blog, even the driest local records can lead to the most interesting stories. Such is the case with the Henrico county court order books, which recorded all matters brought before the court when it was in session, providing organized synopses of cases. The Library of Virginia’s research guide for county and city court records notes that the order books contain a wide variety of information, including appointments of county and militia officers, records of legal disputes heard before the county court, appointments of guardians, apprenticeship of children by the overseers of the poor, naturalizations, road orders, and registrations of free African Americans.

Occasionally indexes to the volumes were compiled separately and inserted into the front or back covers of a volume. The indexes are a great resource to peruse, as they often reveal more than just last names and page numbers—they lead to entries that reveal much about the complex lives and times of the people referenced therein. A few examples from the indexes and entries in a few volumes of Henrico County order books created between 1780 and 1801 illustrate this.

Orphans and the poor, regardless of race, were often apprenticed or “bound out,” and sometimes the order book provided information about various trades. In 1790, “George Maxfield a poor orphan” was bound to a shoemaker, “Simon, a free negro” was bound to a tailor, and “Joe a free negro” was bound out to a barber. In 1799, “John and Christopher, sons of a free Woman lately deceased by the name of Keturah Johnston” were bound out to Daniel Vandewall. That simple sentence alone is packed with genealogical information.

While index entries sometimes provide a hint as to the context, the page containing the order can be even more surprising. An index lists an emancipation from “Wood to Wood,” while the 1796 order entry reads “A deed of emancipation from Nelly Wood to her daughter Janette Wood was acknowledged by the said Nelly Wood.” The index listing for “Hughes Jno his slave to be sold” referred to an order entered in 1796 explaining the circumstances of the sale. John Hughes apparently had allowed his enslaved person Harry to hire himself out, “contrary to the laws of this State and of this County.” As punishment to both, the county government sold Harry and the proceeds of the sale were applied “as the Law directs.” 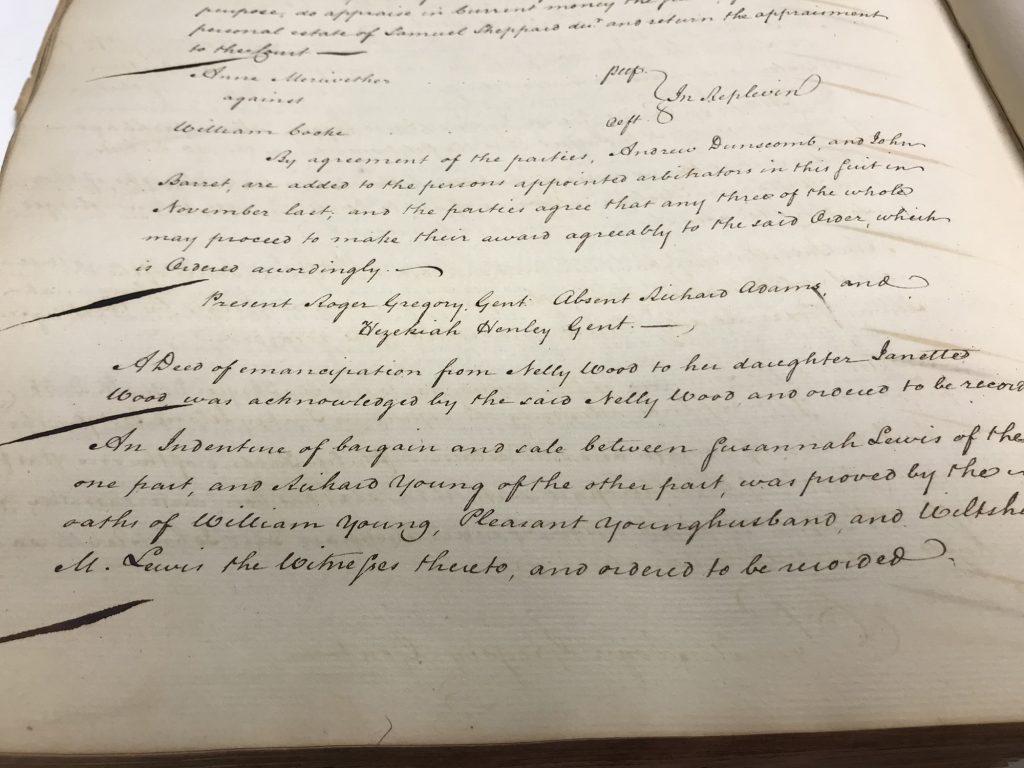 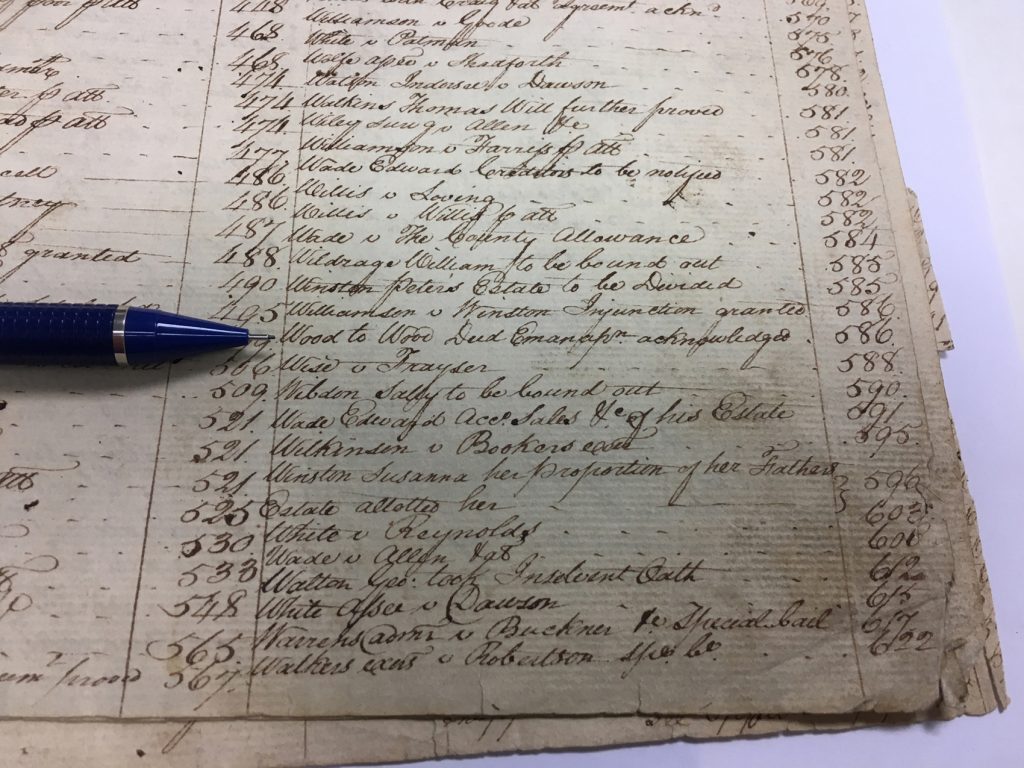 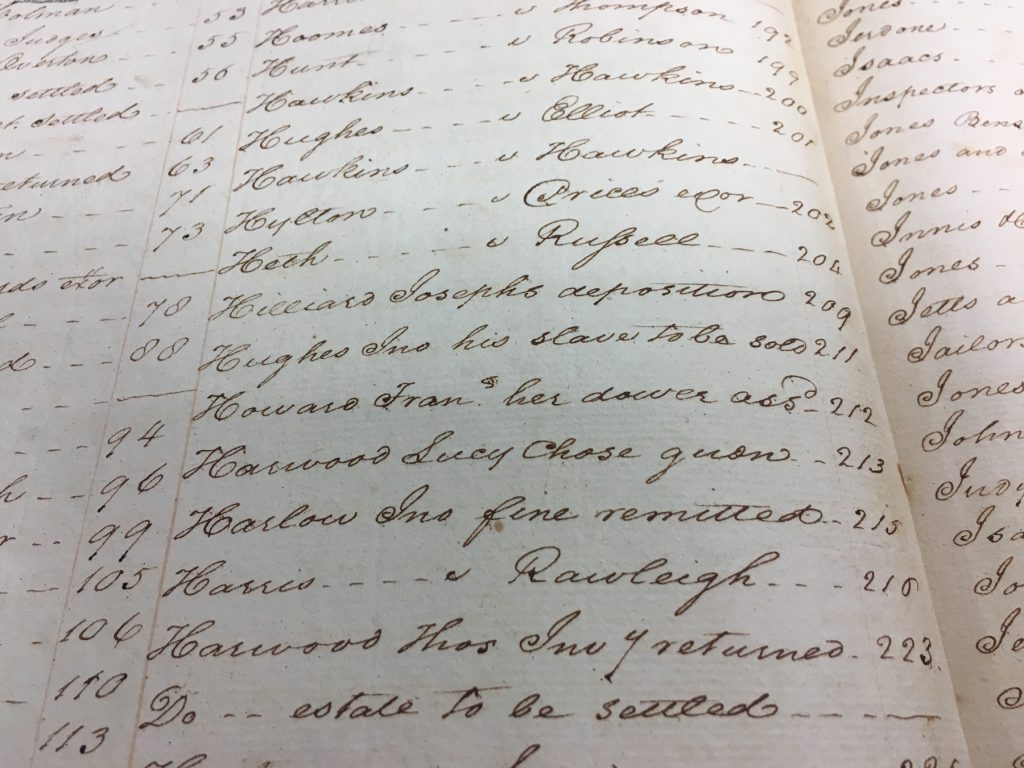 Entries for the courts of oyer and terminer include rulings in criminal cases regarding enslaved people tried for various offenses. In 1787, “Abram a negro man slave the property of Robert Warren” was found guilty of “stealing from Moses Austin and Company sundry articles of merchandise of the value of eight pounds.” He was sentenced to be “burnt in the left hand and…receive on his bare back at the public whipping post thirty nine lashes to be well laid on.” That same year “Thomson Gibbs a mulatto slave the Property of Archibald Robertson” suffered the same fate for stealing a pair of boots. By contrast, eight years later “Jack, a negro man slave the property of John Turpin” was accused of stealing five pounds worth of linen and other articles, but was acquitted and discharged. 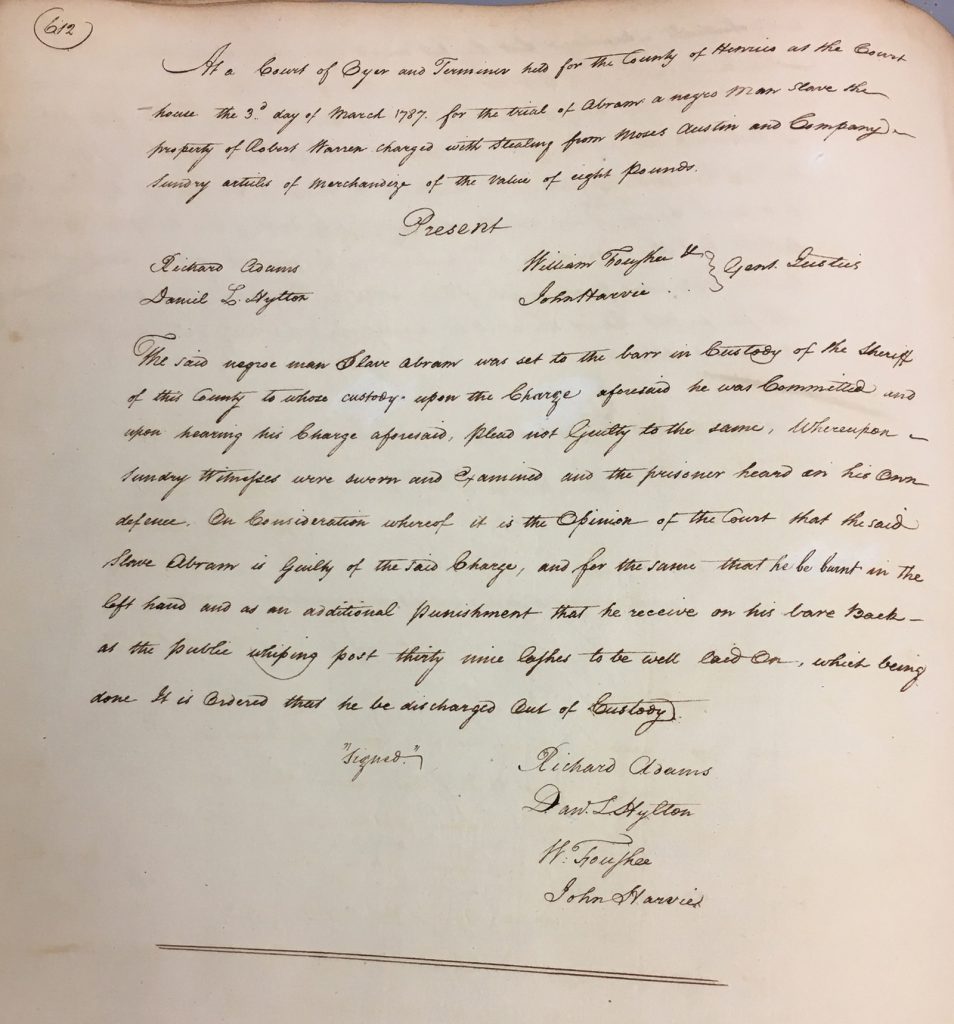 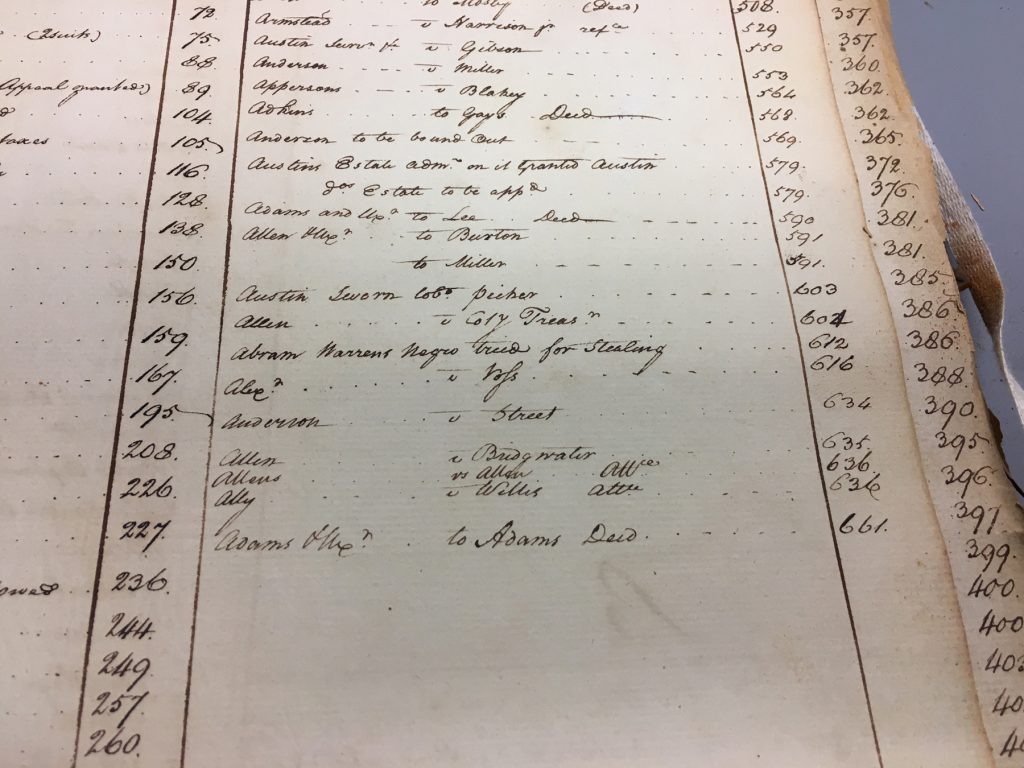 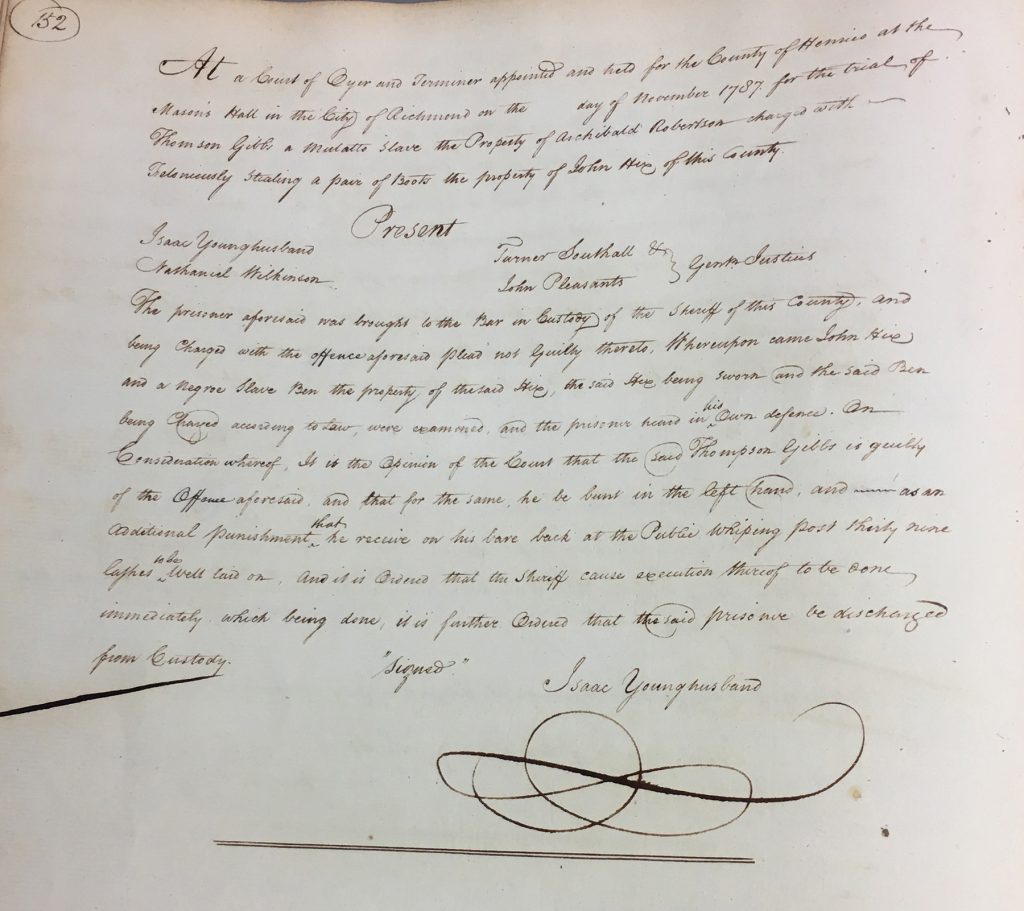 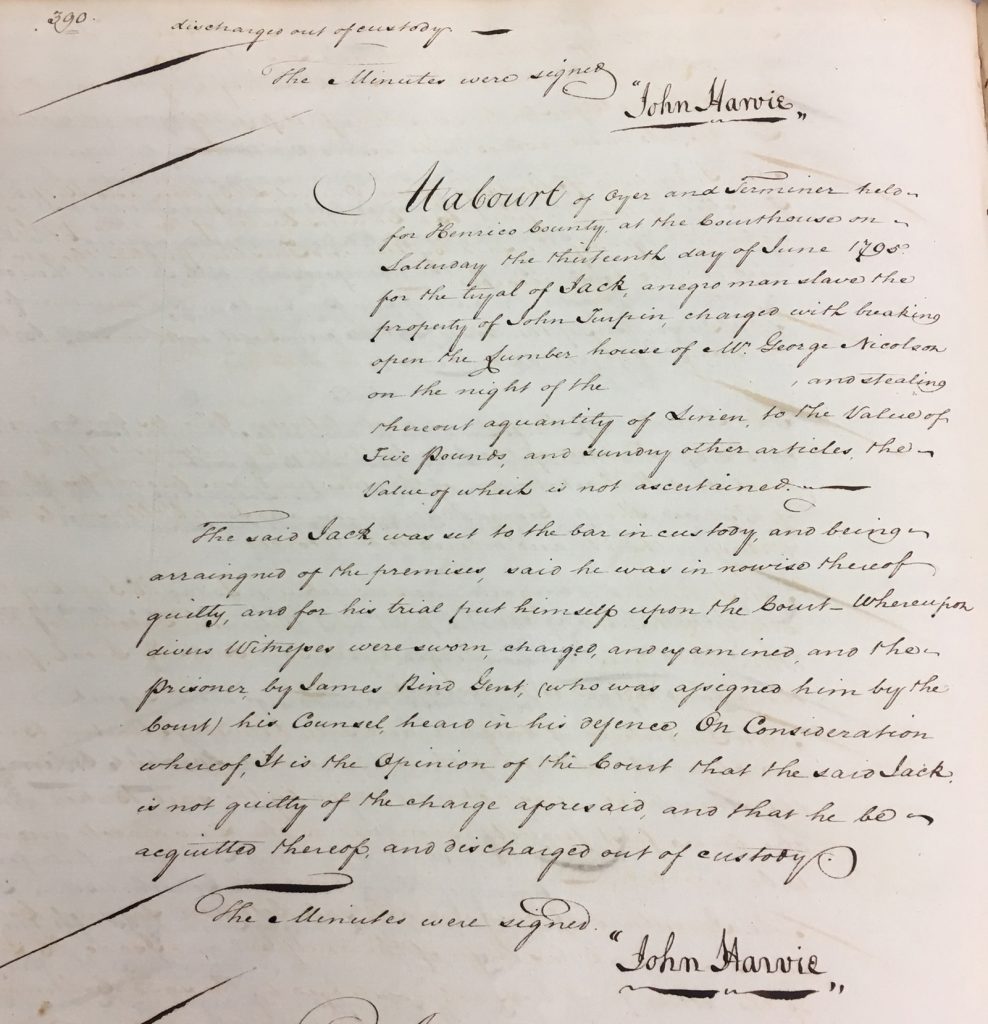 One 1792 entry is notable because it was entered prior to the Slave Trade Act of 1794.  The index reads “Mary v. Brown (for freedom).” The entry pertains to “Mary a Negro Woman” who claimed freedom on the grounds of having been “imported into this Commonwealth in November 1790 by John Brown from the Island of Jamaica” which was “contrary to an Act of Assembly intitled [sic] ‘An Act concerning Slaves’ passed in 1785.” Deponent John Lyne supported her claim. The order was certified, but did that mean she was indeed free? The language of the order is unclear. 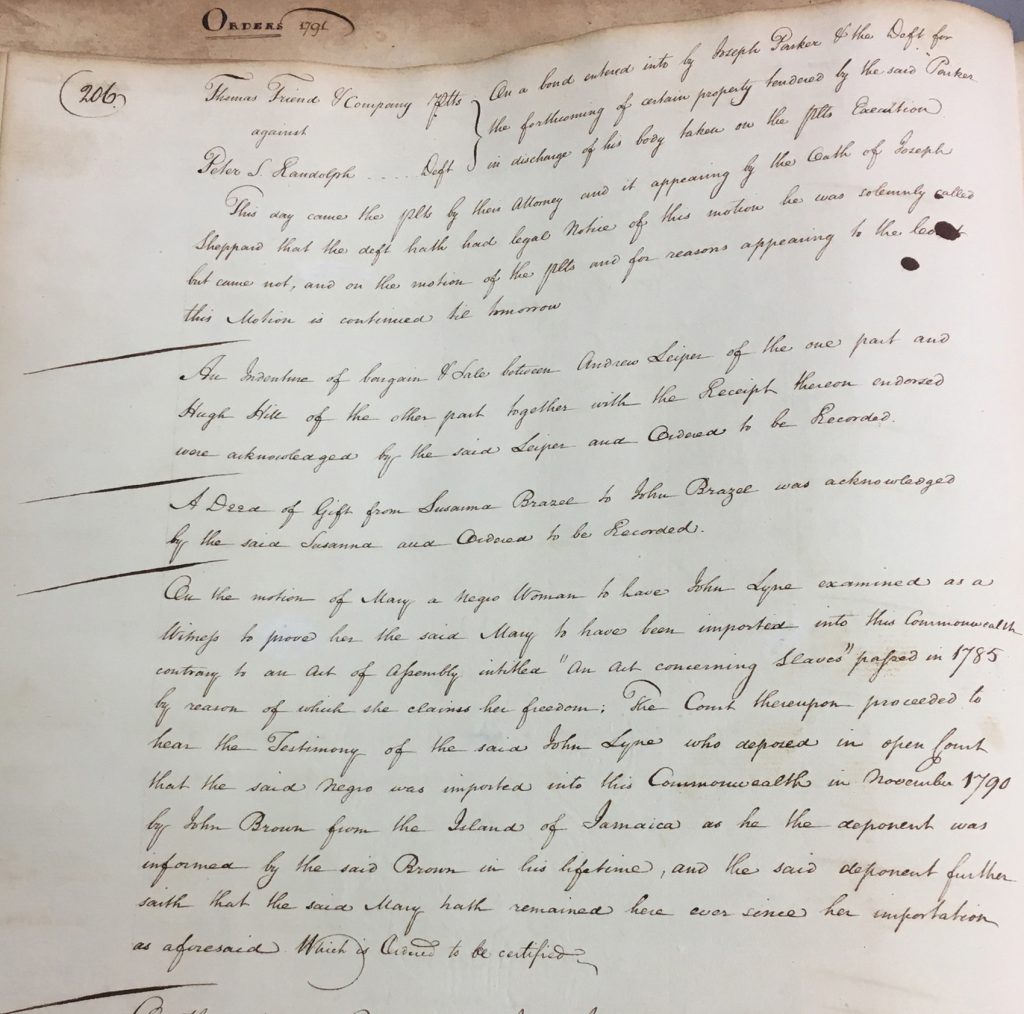 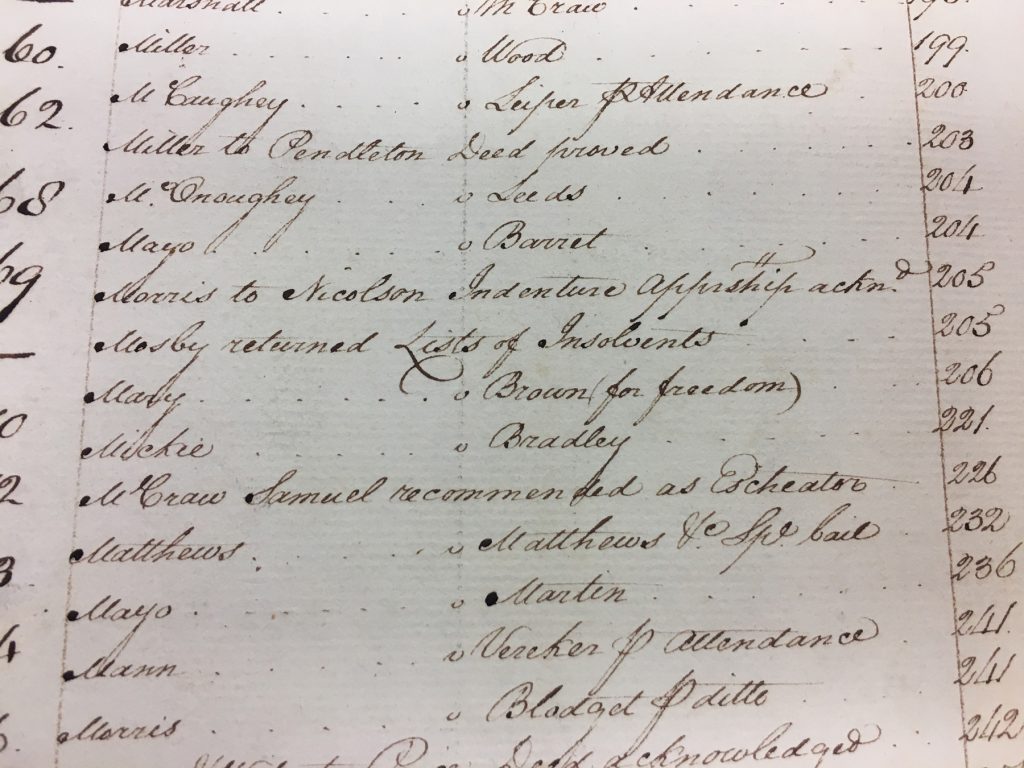 Finally, for those familiar with Gabriel Prosser and the events of August 1800 known as Gabriel’s Conspiracy, Gabriel’s Rebellion, or Gabriel’s Insurrection, Henrico County Order Book 9 1799-1801 contains virtually all entries pertaining to the individuals charged with participating in or planning the uprising. The order book serves as one of several primary sources that document the prosecution of these individuals.  The entry for Gabriel is on p. 400-401. Penciled in the margins of the index pages adjacent to the named individuals is the phrase: “Gabriel Insurrection – all hung.” 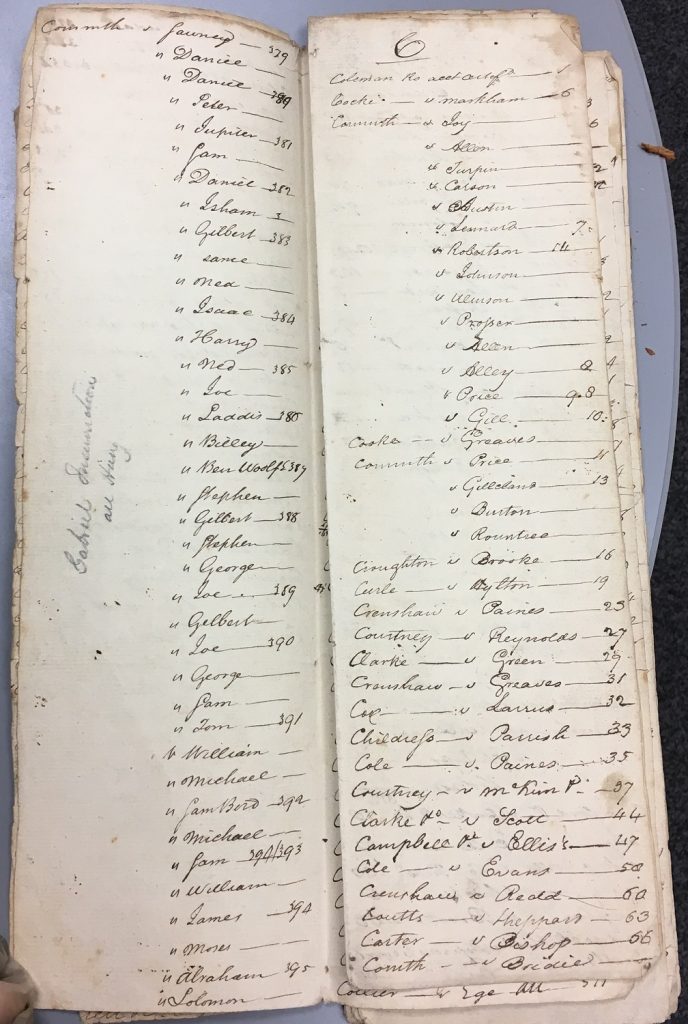 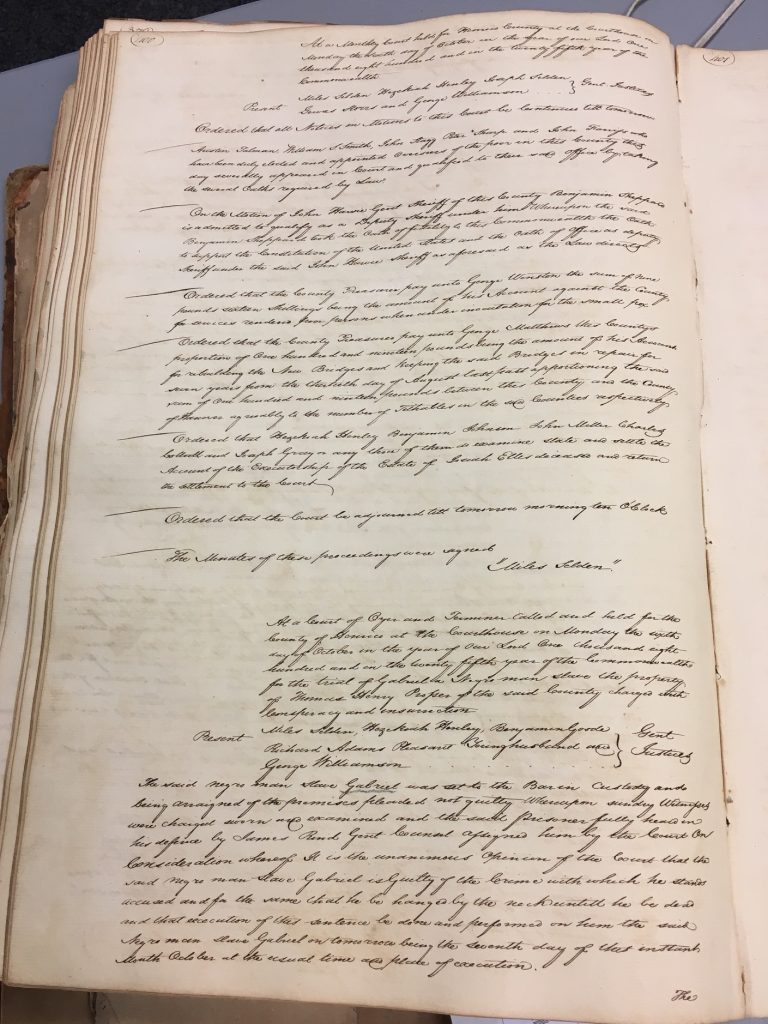 This is a small sample of the types of entries found by browsing through the indexes of early Henrico County order books. Order books and other local records offer very real glimpses into the history of a county as well as the Commonwealth, and the number of volumes and documents can be daunting.  Sometimes, the most important part of a volume is its index. These order books and many of their indexes are available on microfilm at the Library of Virginia. Be sure to take advantage of them!