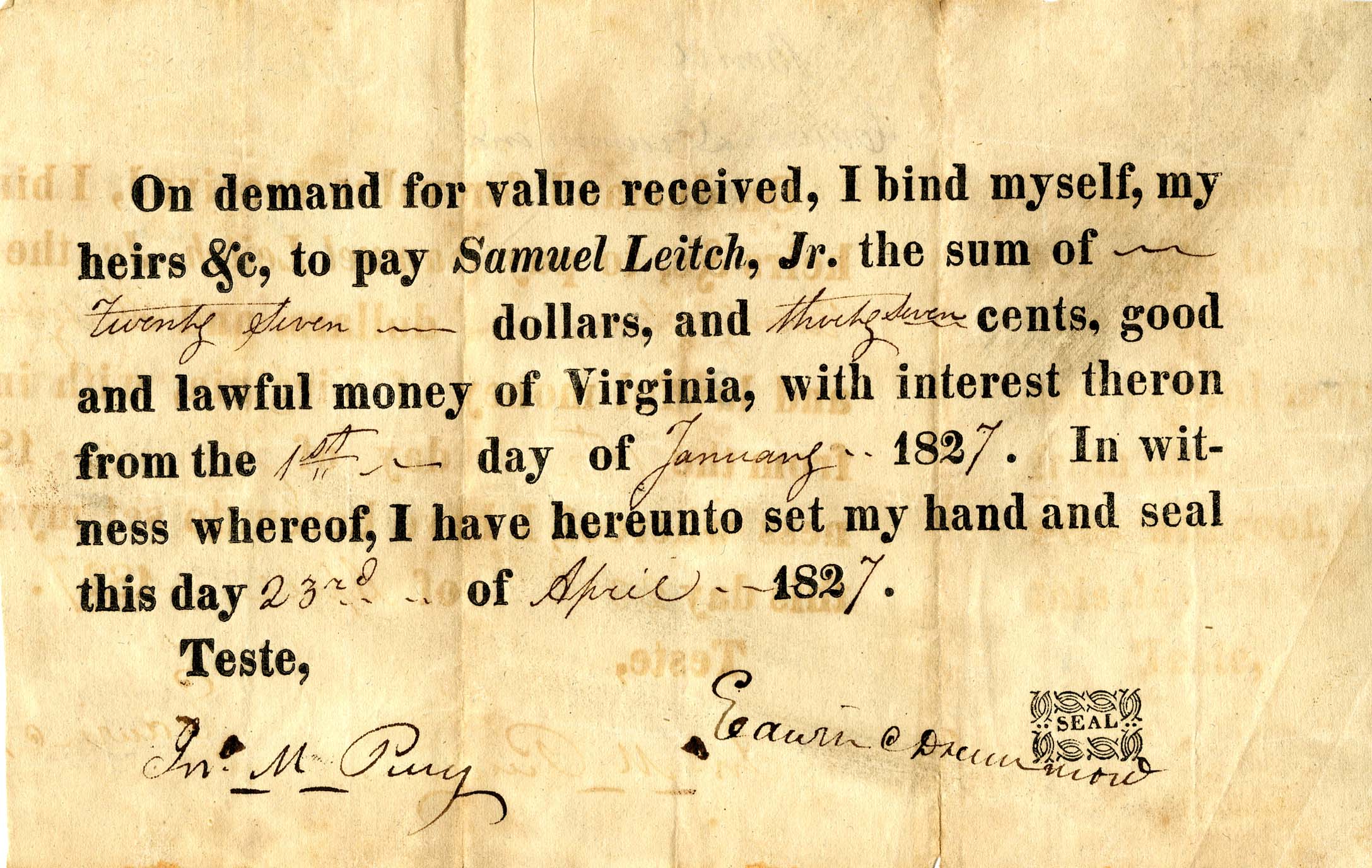 The start of August brings with it the excitement and anticipation of numerous young men and women as they prepare for their first year in college, moving away from home to a new part of the commonwealth, or to a new state altogether. It also brings many parents the not-so-pleasant anticipation of a variety of associated expenses, and the fear of unwanted debt. An 1832 Brunswick County chancery cause is a sobering reminder of how important it is for students to understand and follow a good budget, and to live within their means.

In 1826 Edwin Drummond was a student at the University of Virginia in Charlottesville. He appears to have been what we would now call an out-of-state student, hailing from Morgan County, Georgia.  However, it seems he had family and friends in Brunswick County, Virginia, and owned a tract of land there. Documents in the chancery cause do not reveal whether he was a “first year” or an upper-classman, yet they do reveal that he was boarding locally and not living “on grounds.” Like your average college student today, Edwin wanted to dress stylishly. He frequented local tailors, boot and shoemakers, and general merchandise stores. 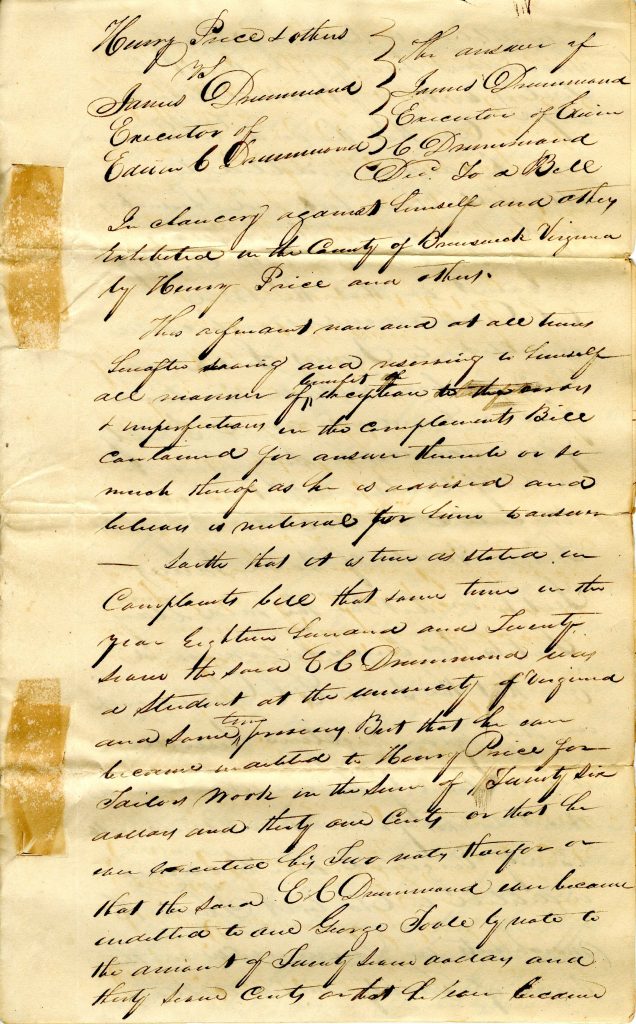 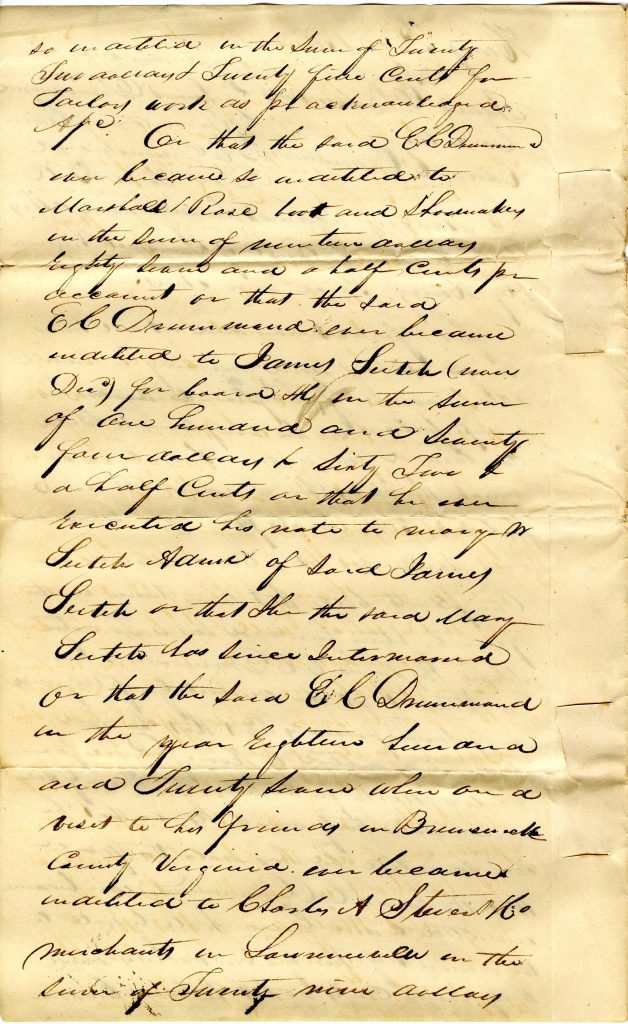 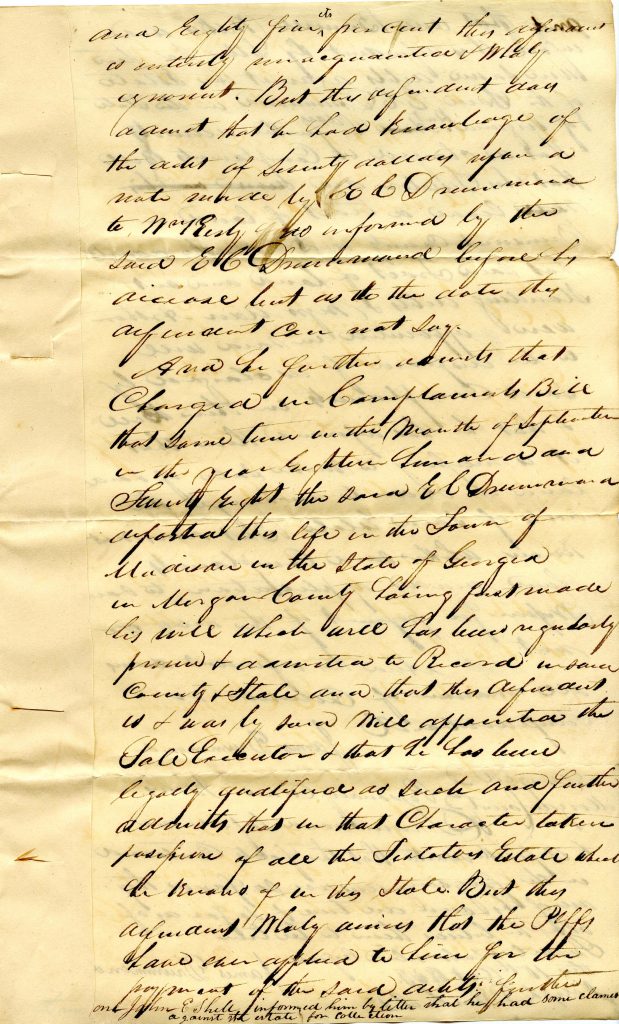 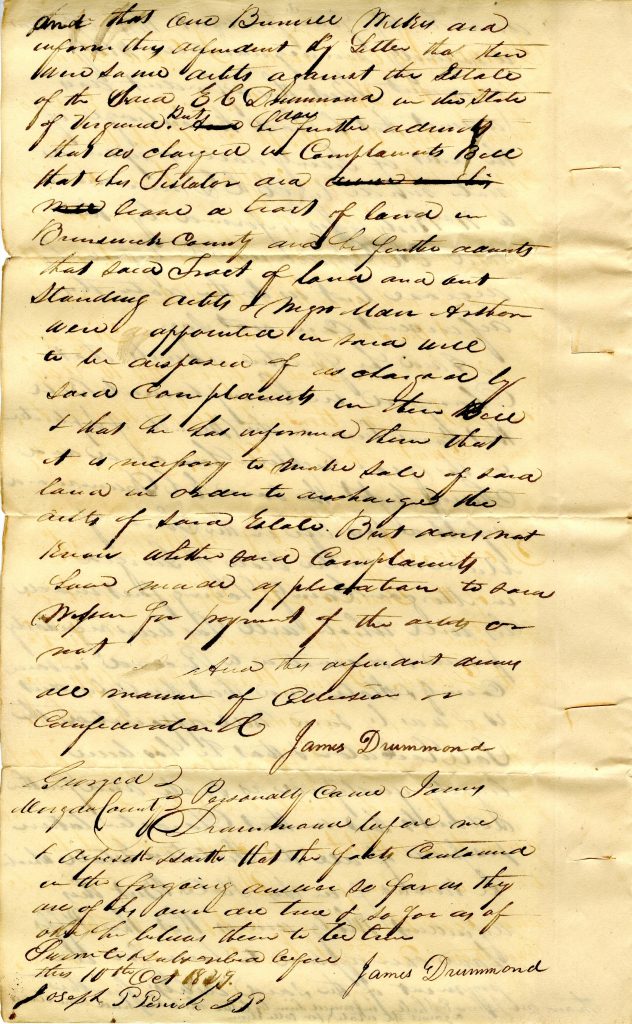 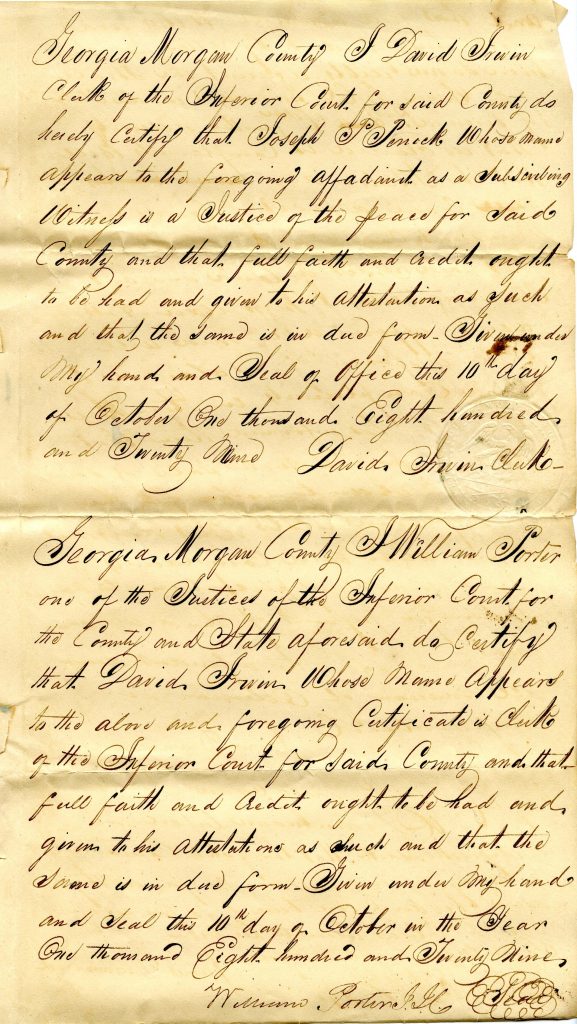 Unfortunately, Edwin ran up debts with two Charlottesville tailors. He owed Henry Price $26.37 for his services between January 1826 and January 1827. A detailed account by George Toole listed the $22.55 debt accrued between May and November 1826 for his making several vests, coats, and pairs of pants. And of course, the materials for those items also had to have been purchased. During the summer of 1827, Edwin reportedly visited friends in Brunswick County, and appears to have shopped regularly at a mercantile in Lawrenceville. According to his account with C.A. Stewart & Co., during the months of July, August, and September 1827 he purchased thread, ribbon and several types of fabric, likely to be used by his tailors, in addition to two pair of cotton hose, a pair of pumps, and a hat, totaling $29.85. Edwin also appreciated the skills of Marshall & Rose, local boot and shoemakers. Between March 1826 and February 1827, he purchased $19.87 worth of slippers, boots, pumps, and shoes.

Aside from his wardrobe debts, he also consistently failed to pay his lodging expenses. While the documents in the cause do not specify a time period, by April 1827 Edwin owed $174.62 to James Leitch for board (or, since Leitch had passed away, to Leitch’s wife, who was administratrix of his estate).  Additionally, he owed $27.37 to merchant Samuel Leitch, Jr., for an unspecified debt, and by June 1827, another unspecified debt of $70 to William Kirby. 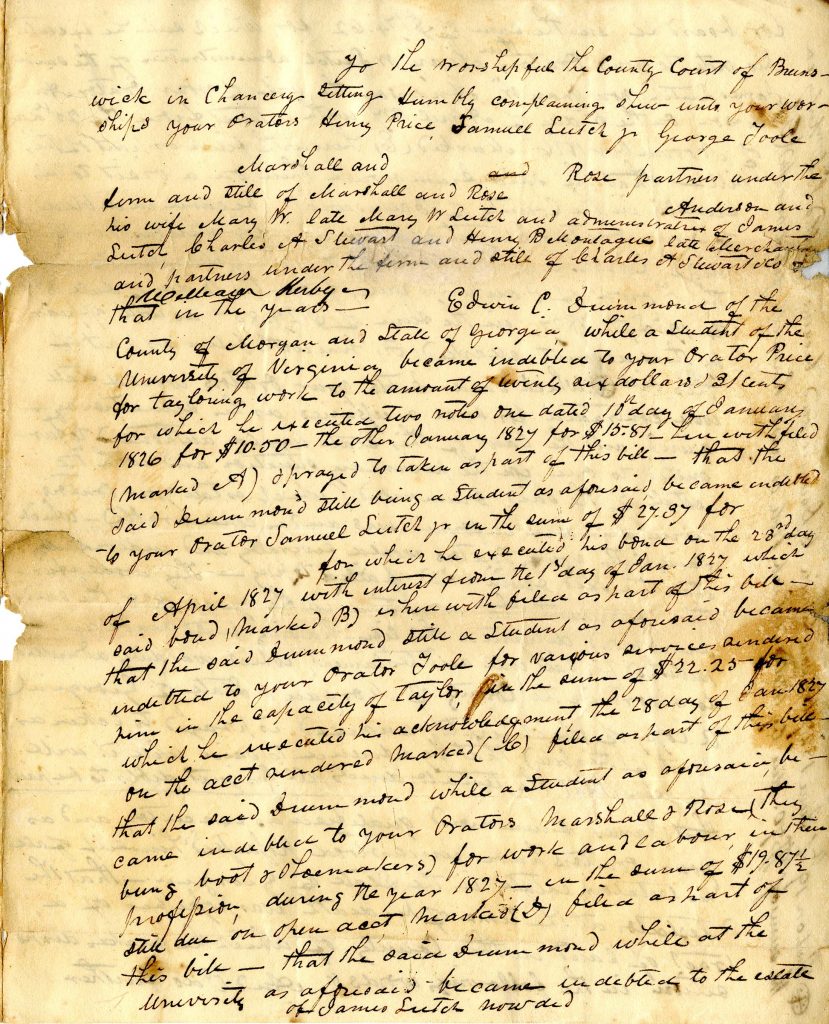 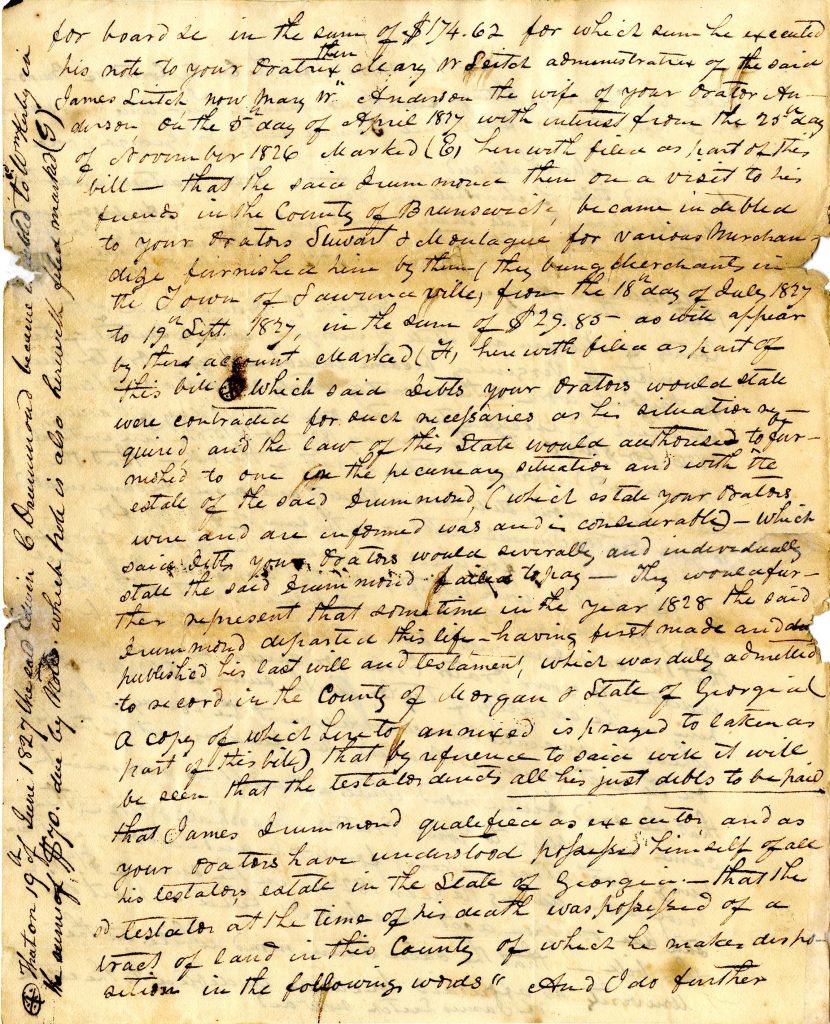 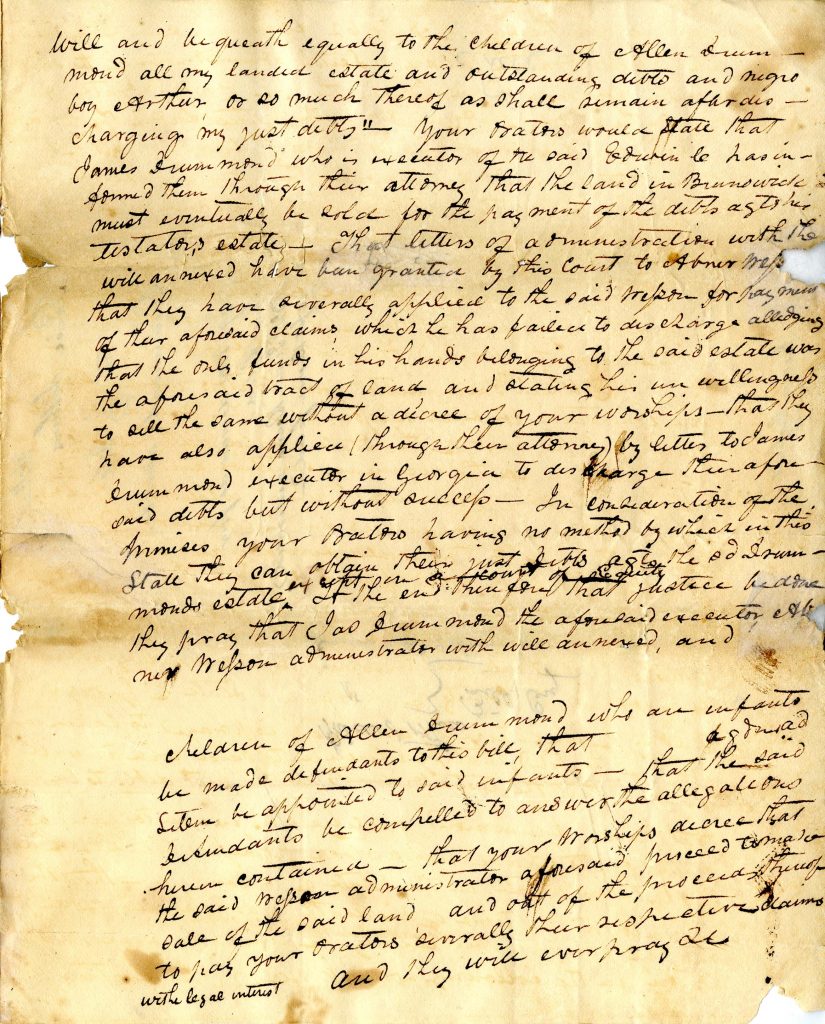 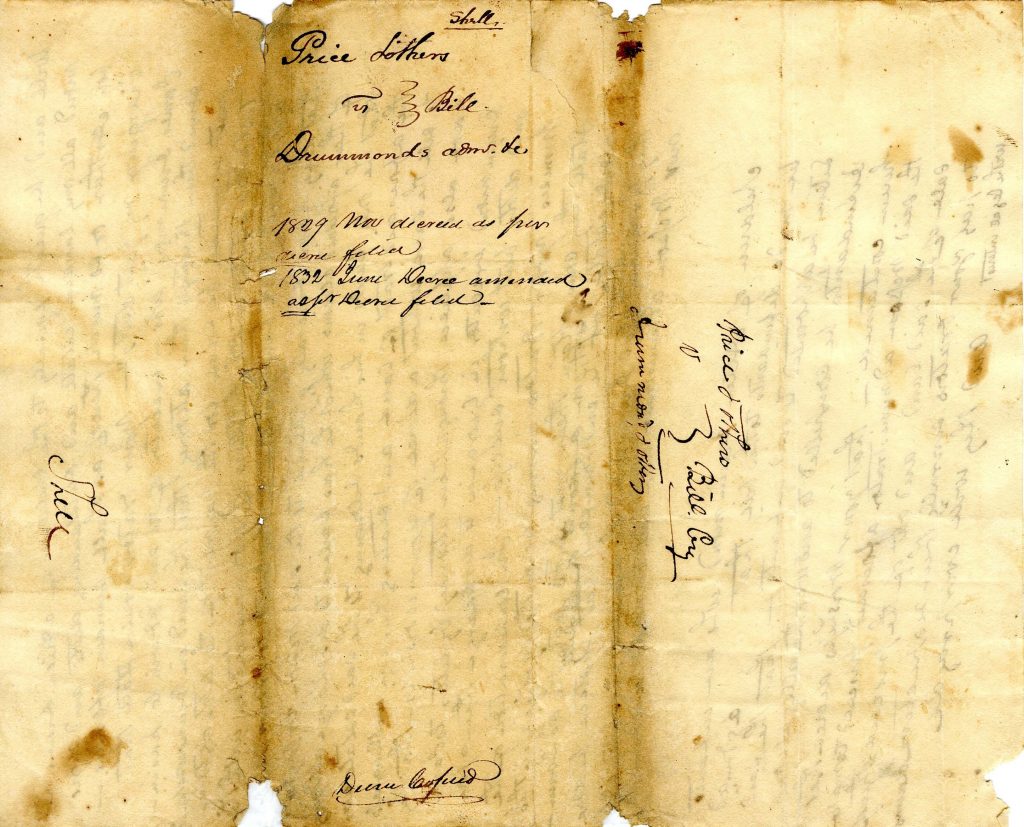 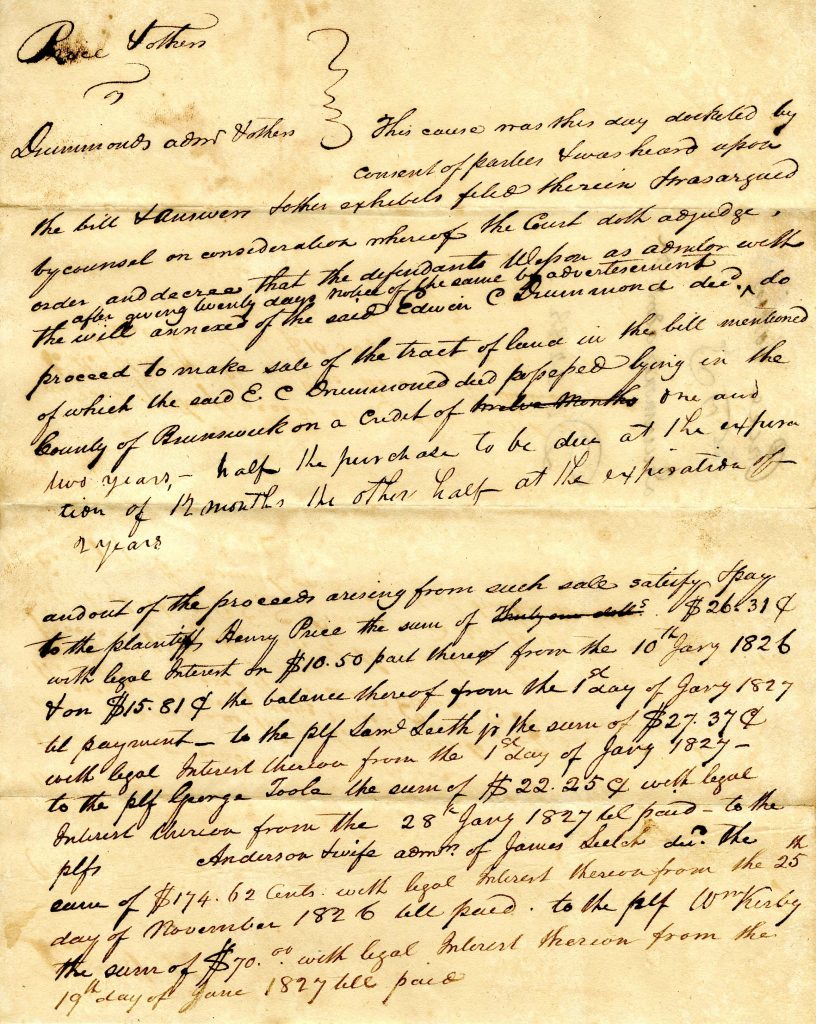 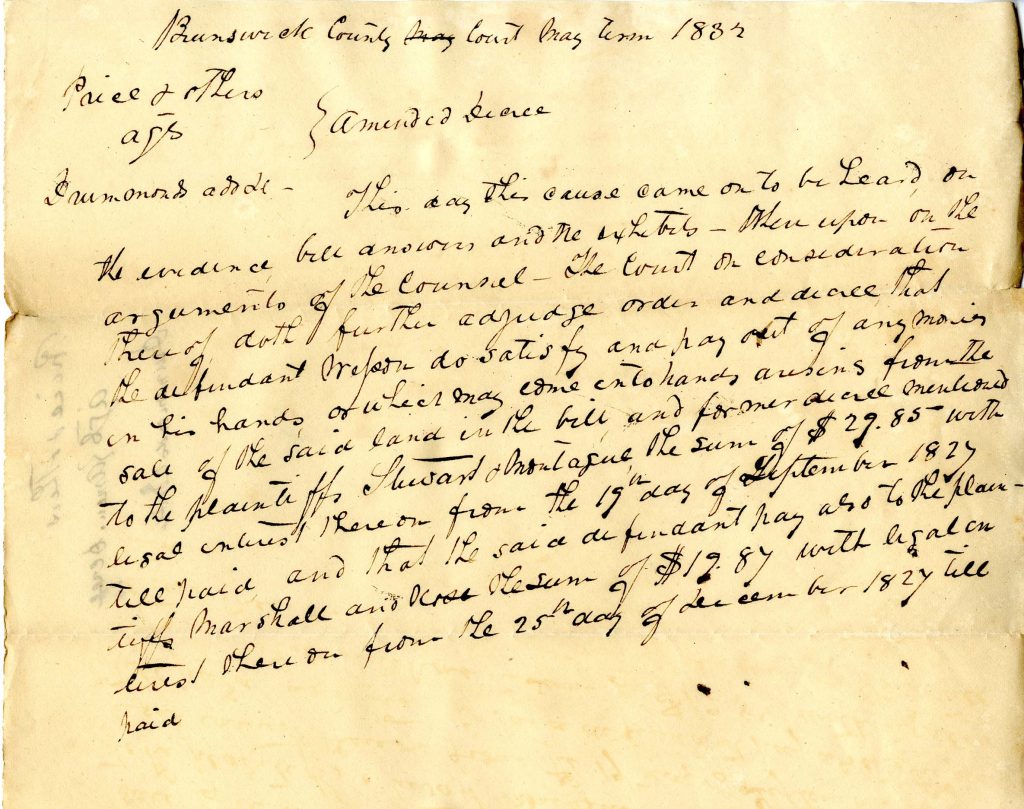 All told, by late 1827, Edwin Drummond owed $370.63 to these creditors, at least $98 of which appears to have been wardrobe expenses. According to one inflation calculator, that total amount is “the equivalent in purchasing power to about $9,493.43.” Even more shocking is his wardrobe equivalent alone in 2019 dollars: $2,526. It is hard to imagine that today’s typical college student budgets that much for clothing in the span of a year or two.

All told, by late 1827, Edwin Drummond owed $370.63 to these creditors, at least $98 of which appears to have been wardrobe expenses. According to one inflation calculator, that total amount is “the equivalent in purchasing power to about $9,493.43.” Even more shocking is his wardrobe equivalent alone in 2019 dollars: $2,526. It is hard to imagine that today’s typical college student budgets that much for clothing in the span of a year or two 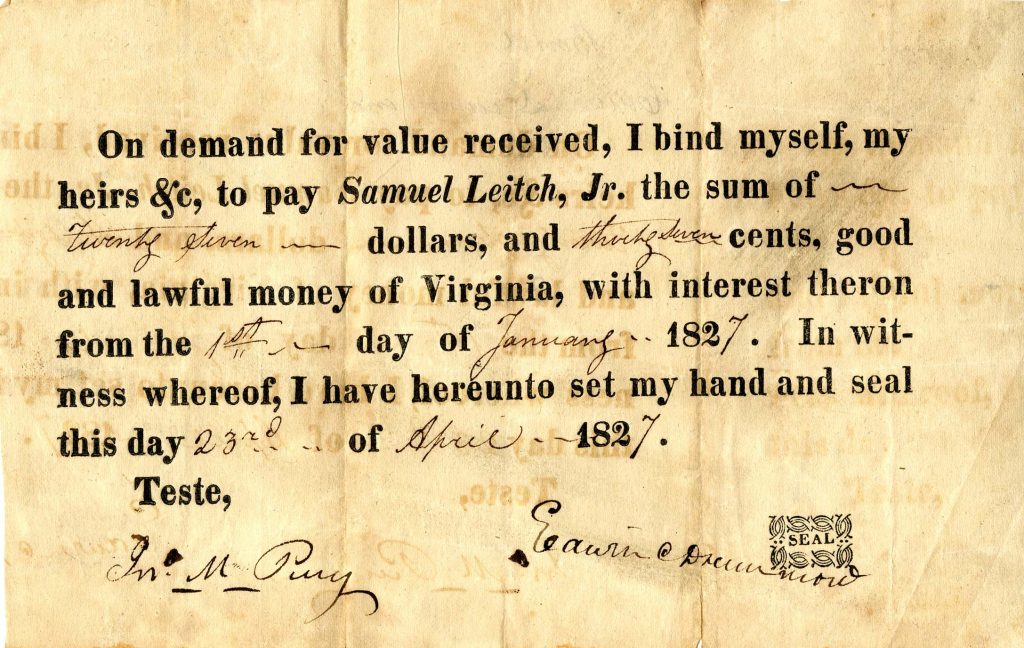 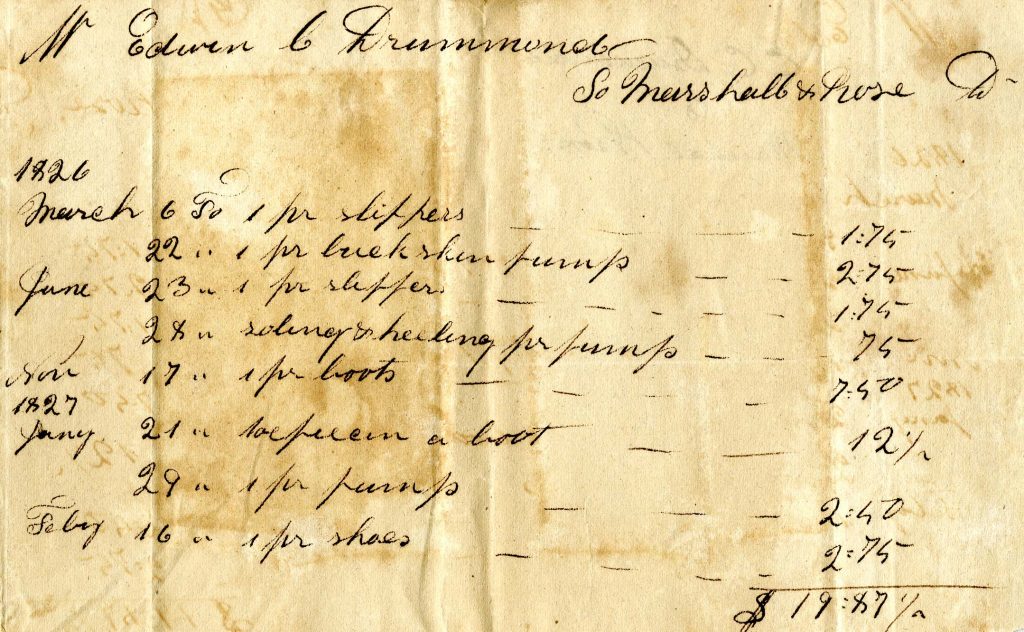 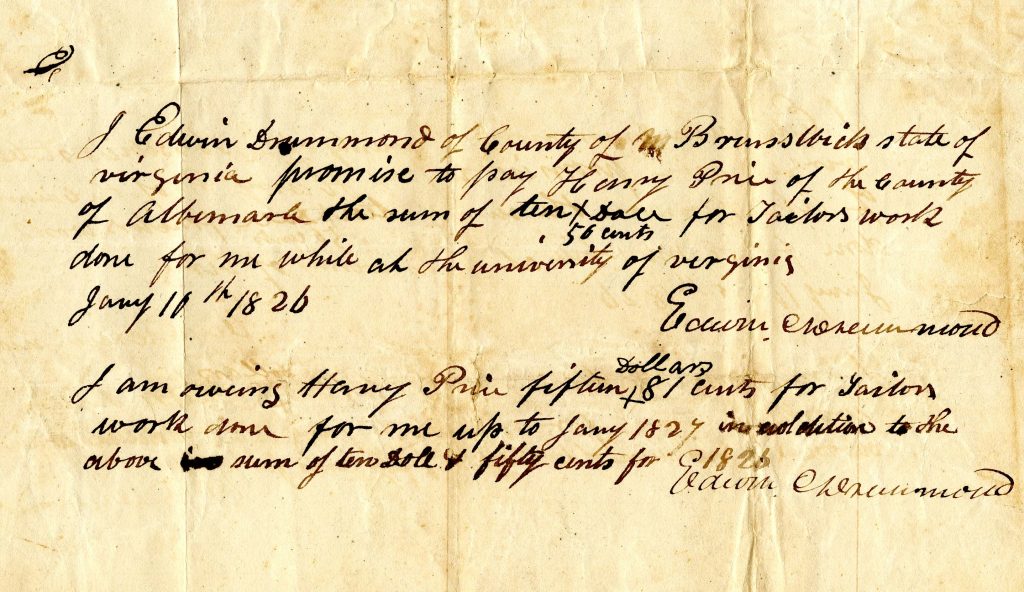 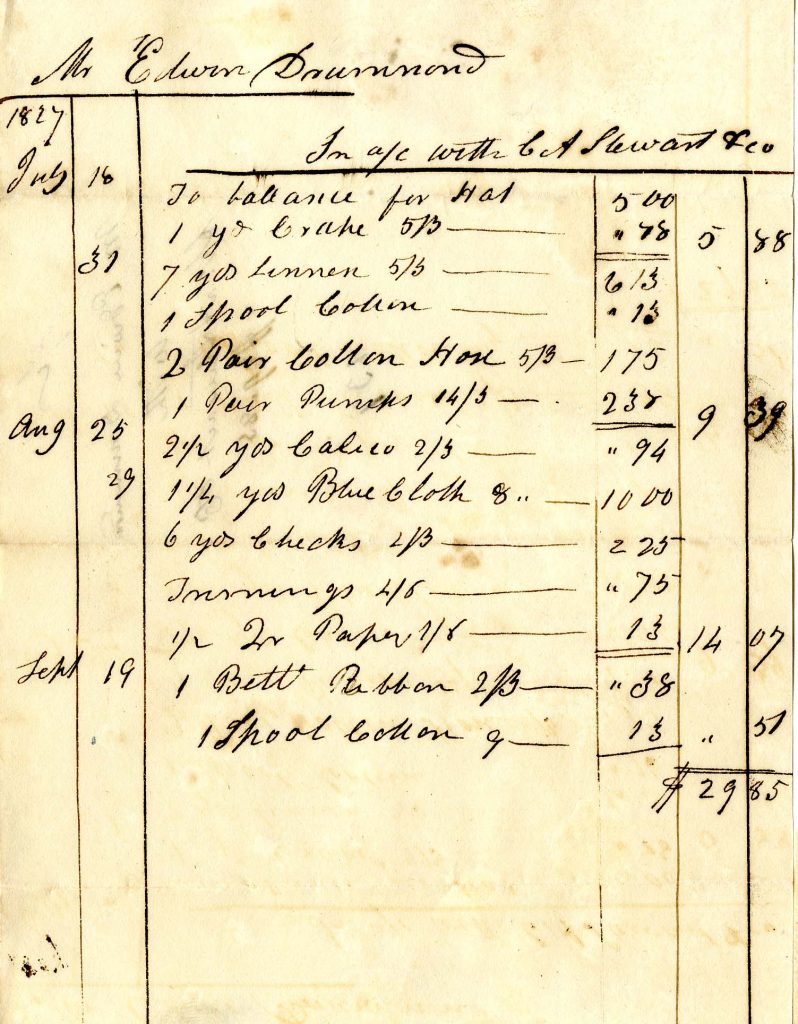 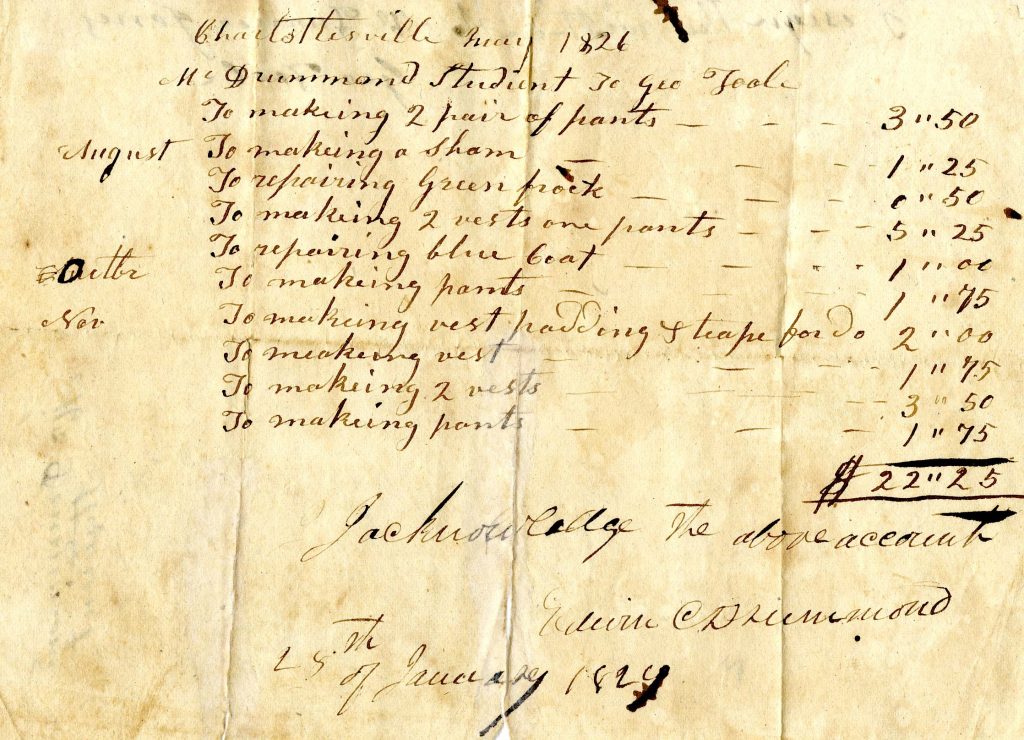 The documents in the chancery cause do not reveal whether Edwin’s financial woes had anything to do with his health, but they reveal that in September 1828 Edwin passed away in Madison, Georgia, leaving a will that stipulated that his debts be settled from his estate. Creditors were eager to be paid, and the only way to do that with an out-of-state defendant was to band together as plaintiffs in a bill submitted to Brunswick County Court, on grounds that Edwin Drummond’s executor should be required to sell Edwin’s property in the county to help satisfy the debt.  The judge ruled in their favor in 1832.

Let this be a lesson for today’s students and parents! Student loan debt is daunting enough in today’s world. Credit card debt, and, frankly, any debt, can grow exponentially without proper budgeting and restraint. This chancery cause confirms, even close to 200 years later, the continuing importance of these challenging financial literacy skills.