Who Do You Love?: Race and Marriage in Virginia Before the Loving Decision

Virginia’s marriage license requirements recently made the national news, and the state’s complicated history with racial classification is part of that conversation. Various records held by the Library of Virginia document this state-sanctioned bias. The following is a look at one such record that contextualizes the discussion of race and marriage going on today.

On 20 March 1924, Virginia passed the Racial Integrity Act, recognizing only two races, White and “Colored.” The act required that a racial description of every person be recorded at birth, and made marriage between white persons and non-white persons a felony. The law was one of the most famous bans on miscegenation in the United States, and was overturned by the United States Supreme Court in 1967, in Loving vs. Virginia. The Racial Integrity Act generally adhered to the “one-drop rule,” a historical colloquial term that holds that a person with any trace of African ancestry is considered Black. However, the act was also subject to the so-called Pocahontas exception. Since many influential families claimed descent from Pocahontas, the legislature declared that a person could be considered white with as much as one-sixteenth Indian ancestry. This law, along with the Sterilization Act also of 1924, imposed the practice of scientific eugenics in the Commonwealth.

The racial criteria behind the act were developed by Dr. Walter Plecker, a physician and public health advocate who was the first registrar of Virginia’s Bureau of Vital Statistics. After graduating with a medical degree from the University of Maryland in 1885, he settled in Hampton, Virginia in 1892, and became its public health officer in 1902. He took an active interest in obstetrics and public health issues, educating midwives, inventing a home incubator, and prescribing home remedies for infants. Plecker’s efforts are credited with an almost fifty percent decline in birthing deaths for black mothers.

Plecker served as the registrar of Virginia’s newly created Bureau of Vital Statistics starting in 1912. An avowed white supremacist and advocate of eugenics, Plecker believed that the state’s Native Americans and African American populations had become so racially mixed that the Native American distinction ceased to exist. Plecker helped to craft the Racial Integrity Act of 1924 and championed its passage. He believed that African Americans in Virginia were attempting to pass as Native Americans, and he began obsessively documenting each and every birth and marriage registration submitted to his agency. Plecker’s policies pressured state agencies to reclassify most citizens claiming Indian identity as Black. 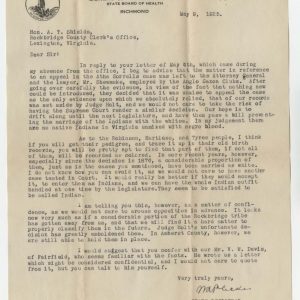 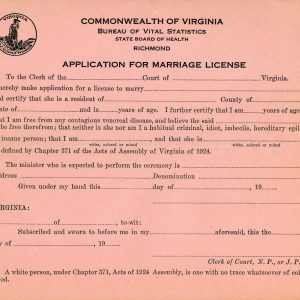 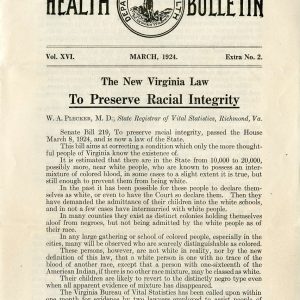 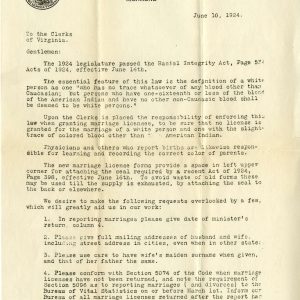 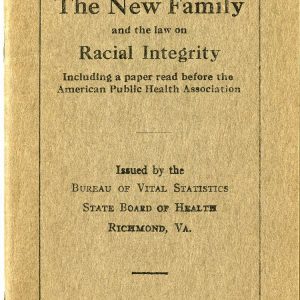 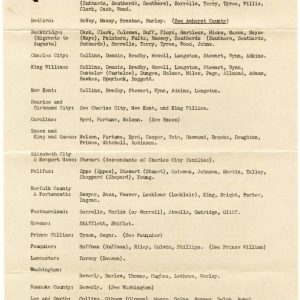 Plecker’s unwavering adherence to eugenics theory and his fanatical belief that Virginians could only be White or “Colored” has had long-lasting ripple effects. For decades, members of Native American nations in Virginia had difficulty documenting their heritage because official records essentially wiped out their cultural identity. Due in part to Plecker’s “paper genocide,” none of Virginia’s Native American tribes were granted federal recognition until 2018.

However, not everyone bowed to Plecker’s tyrannical oversight. In Rockbridge County, Atha Sorrells fought back. Filing a suit in 1925 styled Atha Sorrells by her next friend William Sorrells vs. A. T. Shields, Clerk of Circuit Court, Sorrells challenged the clerk of Rockbridge circuit court after he denied her a marriage license to marry Robert Painter on the grounds that she was not a white person.

Atha Sorrells’s contention was that her family had some Native American ancestors rather than African American ancestors and that they had long been considered White, or at least not Black. Evidence in the form of a family tree, copies of federal land warrants and War of 1812 military service, a similar prior case in which her ancestor James Clarke was declared in 1876 to be a white person, and depositions to support her claim were all submitted. The depositions in Sorrells’s case concerned the family tree and family relationships, whether the Clark and Sorrells families had gone to White or Black churches and schools, who these families associated and married with, and what the general opinion of the neighborhood was as to their color and the color of their ancestors. Numerous questions centered on the families of the Irish Creek community in Rockbridge County, many of whom claimed (or were accused of) some degree of Native American ancestry, probably Monacan. Dr. Plecker was one of the deponents for the defense.

Atha Sorrells won her case when the judge decided that her ancestry was Indian and not Black, and that she contained little enough Indian, vis-à-vis the Pocahontas exception, to be classified as a white person under the Racial Integrity Act of 1924. However, the Sorrells case was the exception rather than the rule. Although Plecker himself died in 1947, after being struck by a car in Richmond, his policies had a lasting impact on Virginians. Many alterations to official birth, marriage, and death records went unchallenged with long-lasting cultural ramifications, all in the name of a now disgraced pseudo-scientific theory.