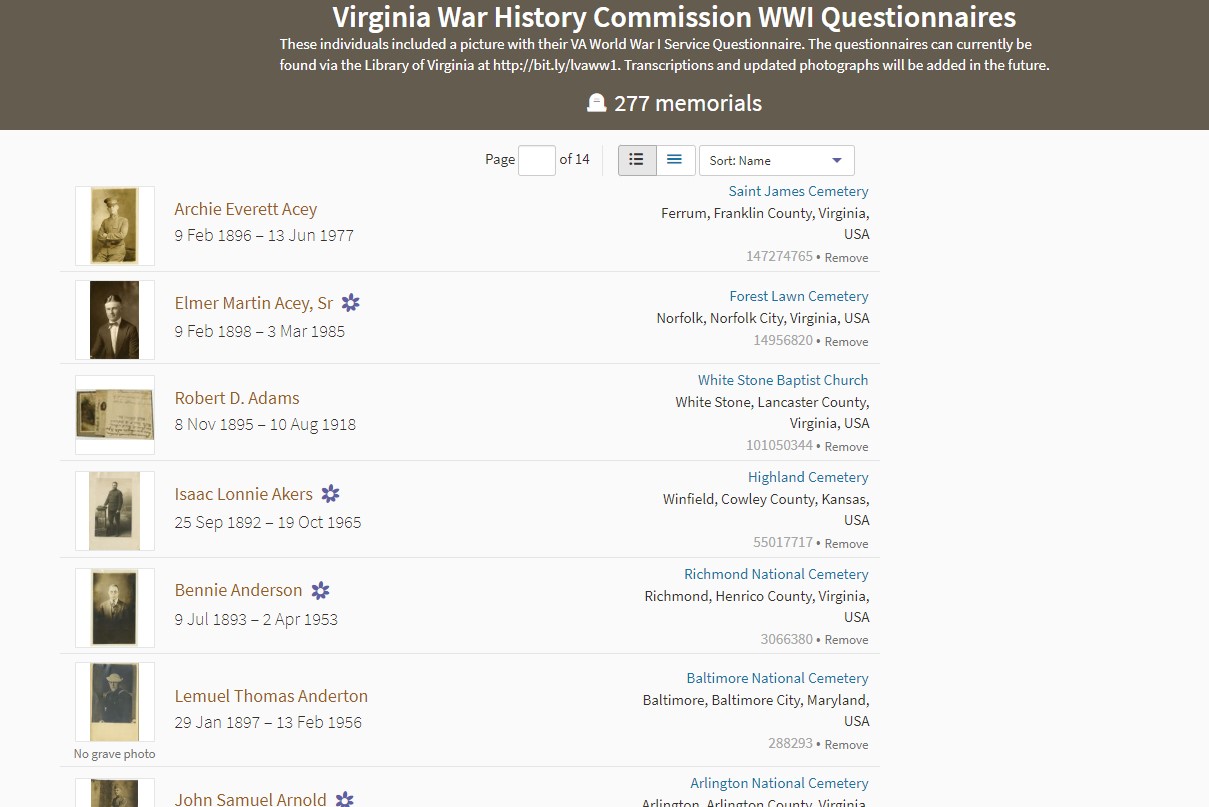 By Jessi BennettNovember 6, 2019No Comments

Next Monday is Veteran’s Day. We honor veterans but we can never truly understand everything that they have experienced. At the end of World War I, the Virginia War History Commission asked its returning Virginia veterans to recount their experiences for the historical record. Numerous men and women from around the state returned questionnaires, revealing the details of their war service or that of a loved one who had not survived the war. Some are typed, some are written longhand, some are profuse with their accounts, some respond in one word answers, many skip pages or sections of the form completely. At the request of the commission, many also attached a photograph. These were sometimes very large official portraits and sometimes just their face cut out from a larger image. 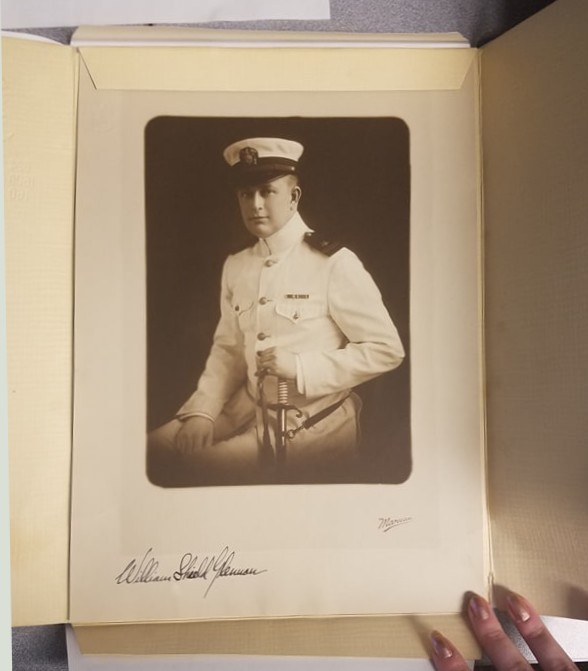 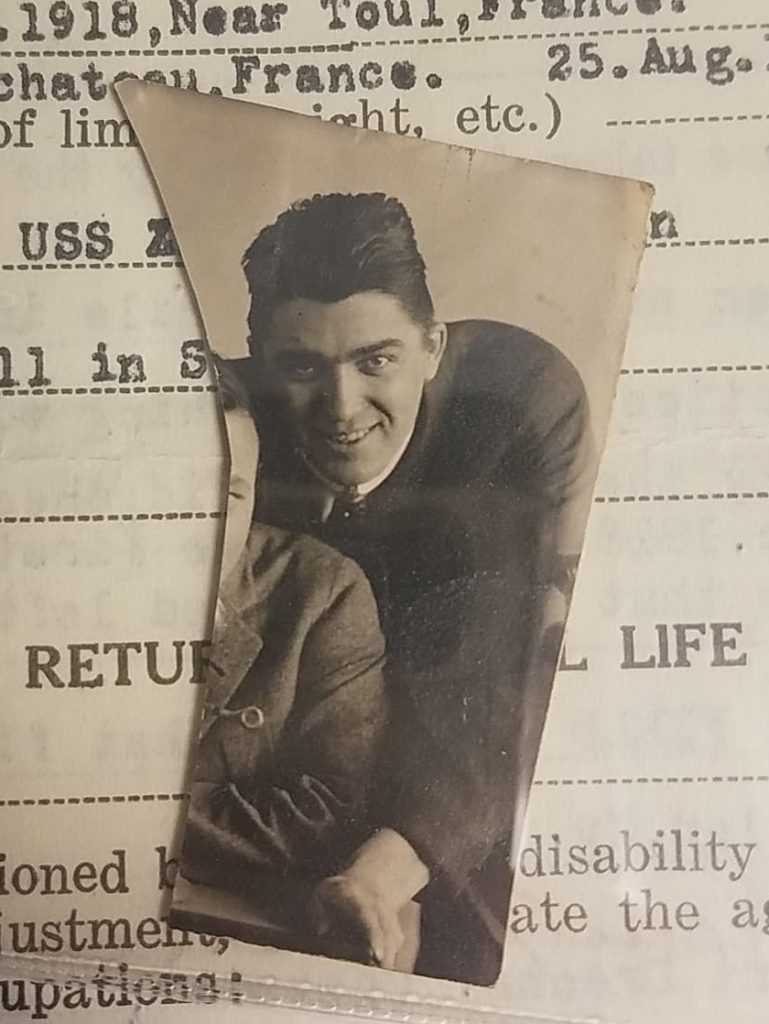 These records are an invaluable source of information. They encompass a larger swath of the Virginia population than many other collections, and the personal narratives and portraits bring a much more human touch to the pages than you typically encounter in government records.

It’s no surprise then that we keep turning to this collection as new technological advances allow us to share it more widely and in more significant ways. The World War I Questionnaires were one of the first collections the Library of Virginia put up online over 20 years ago.

Scans of digital images have greatly improved since then. The new scans were so evocative we created a whole exhibit entitled True Sons of Freedom to showcase the portraits of African American World War I soldiers in 2018. The online supplement is still available. 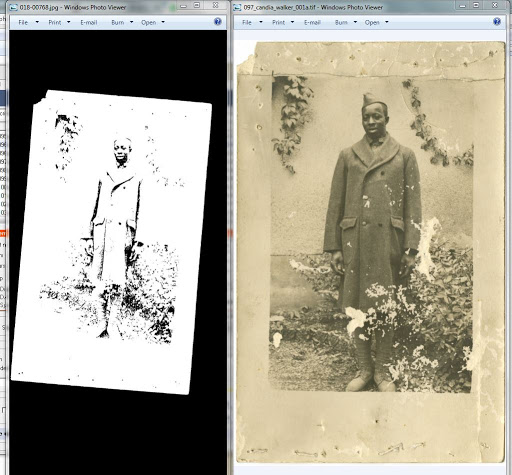 About a year ago we also launched a companion to our Transcribe site. This new transcription method, hosted on From the Page, allows our volunteer transcribers to work with structured data such as forms, so once again the World War I questionnaires seemed a natural choice. Creating a line for each data point in the form made us truly appreciate how much information the commission was trying to gather!

As much as librarians and archivist might want to read all day, we very rarely get to. However, those of us transcribing and approving these transcriptions added another layer of appreciation to this collection as we read the firsthand accounts of the men and women who served. For example, when Charles Herbert Young of Nottoway was asked why he enlisted, he said:

“This may seem strange to you, but for your information I will try to explain. I enlisted in the Canadian Forces for curiosity and adventure and found plenty of both and came home none the worse for my experiences”.

Whereas Job Thomas Bell of Norfolk noted that his war experience had “lessoned [sic] the value of human life” in his mind. No two men had the same experiences and their perspectives on the war varied greatly.

There are still around 12,500 pages that need transcriptions, and we are adding more every week. Given our relatively newfound ability to crunch large amounts of data, this collection might be able to afford us even more new insights in the future despite its age.

Having increased the accessibility of the text in this collection we also pondered how we might let more people know about the images. Picking the few images that were displayed during True Sons of Freedom was a hard decision and an exhibit hall cannot hold the many hundreds of images this collection contains. While the older scans are available online it is hard for people to come across them unless they already know that they exist.

Many times when people start researching a non-famous individual, one of the first things they do is type the person’s full name and dates into the Google search bar. Often this will lead them to FindAGrave, a crowd-sourced online burial database where volunteers have indexed and photographed graves all over the world. FindAGrave is a great resource for dates and familial relationships. Although its primary focus is graves, many of the profiles have portraits attached to them and there is always a thrill when one encounters a picture of a relative that one has never seen before.

Recently we have begun to add the pictures from the World War I History Commission Questionnaires to FindAGrave, allowing researchers a gateway into our collections they have not had before. FindAGrave does not allow the attachment of a large amount of written detail, but it is enough that the Library of Virginia’s name and the collection title is attached to the image, leading the researcher back to us and letting us once again fulfill our goal of disseminating our historic information to the public. 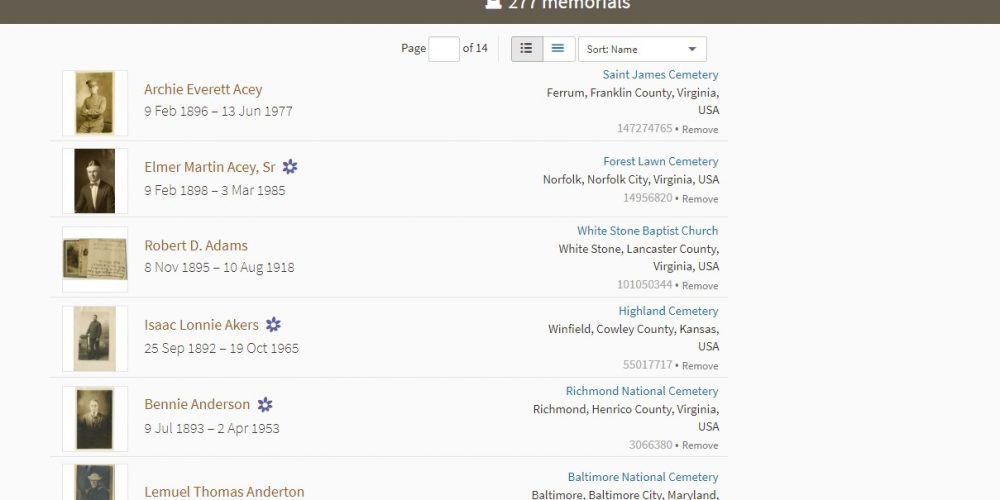 Click here to view all the World War I Pictures we have uploaded to FindAGrave so far. If you see a picture of an individual you are interested in please visit our catalog and search their name to bring up the online scan of their questionnaire. Click here to see the other collections we’ve added, including the World War I Base 45 Nurses.