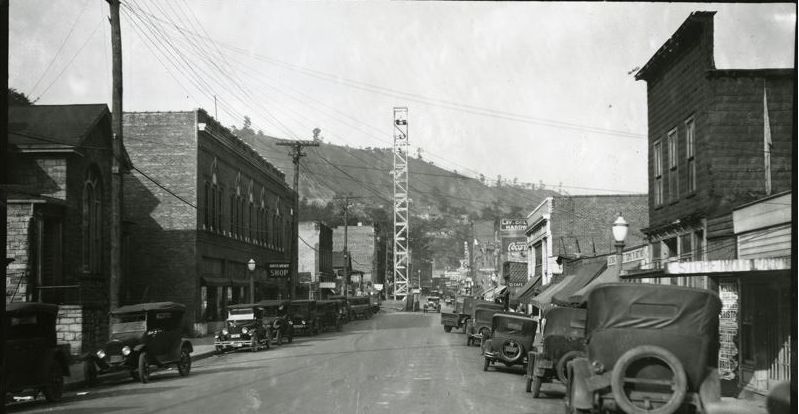 “I hope to know a new and meaningful freedom”: A Crusading Newspaperman Moves On

Writing about Bruce Crawford’s 1935 departure from the newspaper industry, Louis Jaffe, the Pulitzer Prize-winning editor of Norfolk’s Virginian-Pilot, penned what amounted to a eulogy:

In the end, the crusader decided that the game of righting human wrongs while tied down by the limitations of a weekly, dependent on the favor of the satellites of privilege for its sustenance, was not worth the candle. There is work for him to do—out in No Man’s Land where only the brave pickets venture, where the lines are facing each other for the new Battle of the Century. Out there he can swing his sword in a wide arc without fear of wounding the feelings of subscribers or advertisers. His less venturesome colleagues of the publishing world will hope he wins through. No more consecrated soldier in the war of human rights was ever graduated from the training school of Virginia journalism.

Crawford responded in his characteristic way: “If I am graduating, I hope it is into left-wing radicalism; and I urge my many liberal friends to come along.”

Bruce Crawford owned and operated Crawford’s Weekly, the most popular newspaper in Wise County, for most of its 1920-1935 publication run. Wise County had a much larger population then—about 50,000—as compared to today. Driven by coal companies, Wise and surrounding Appalachian counties grew rapidly from about 1880 to 1930 before plateauing, then declining in parallel with the coal industry by the mid-twentieth century. Wise County was the effective heart of Virginia coal country and Norton, the county seat, was a major activity center. Crawford’s position in downtown Norton was thus a perfect launching pad for publication. 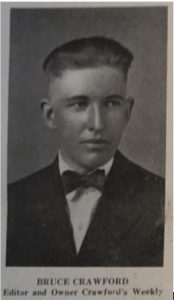 Crawford’s Weekly was a typical independent weekly newspaper in many ways, but what distinguished it from peers was Crawford’s editorial page. Stories of everyday life—baseball games, political drama, and true crime from across the nation—appeared alongside Crawford’s editorials covering a surprising range of topics. He championed anti-lynching legislation, supported the teaching of evolution in public schools, campaigned for female political candidates, criticized President Franklin Roosevelt for close ties to corporate interests, and opposed military actions while supporting veterans. Two major campaigns characterize Crawford’s rise from regular small-town newspaperman to socialist leader and activist.

Crawford’s peers considered him one of the bravest journalists in the Commonwealth, and no editorial campaign exemplified this quality more than his early-1920s condemnation of the Ku Klux Klan. Starting on 19 January 1923, Crawford published editorials weekly that slammed the resurgent organization for its brutality, bigotry, and flat-out ignorance, depicting it as a “condemned organization of hooded roughnecks.” Klan members retaliated by mounting their own campaign against him and his newspaper. The Klan’s powerful presence in Wise County resulted in significant losses to Crawford’s subscription count, but Crawford pushed on. In the end, Crawford’s Weekly played a major role in dividing local Klan leadership, leading to the organization’s decline. His final Klan-focused article, dated 21 November 1925, offered support for the town of Appalachia’s fight against the KKK and cheered local leaders on in their goal of “putting the TNT under the KKK in Appalachia, as was done in Norton, and splitting the order into opposing parts to their mutual detriment and eventual and eternal obliteration.”

A bullet fired by a police officer drove Crawford’s approach to the news even further to the left and launched his second campaign, this time for workers’ rights and for justice throughout the South. In 1931, Crawford traveled to Harlan County, Kentucky, to report on the ongoing miner strikes. While crossing a footbridge with a colleague, bullets peppered the wooden planks ahead of and behind the pair. They ran, but a bullet caught Crawford in the leg. Nobody witnessed the gunman, but before leaving town it became clear to Crawford the shots came from someone acting on behalf of the anti-union local sheriff, John Henry Blair.

Had Blair known the effect of this gunfire, he likely would have called it all off. It made Crawford a small celebrity amongst pro-union activists and, ever the self-promoter, he was quick to lean into the newfound attention. Famed American author Theodore Dreiser invited Crawford to partake in the National Committee for the Defense of Political Prisoners, better known simply as the Dreiser Committee, when the group went to Harlan County to advocate for the miners. Crawford joined the group as they advocated for social justice throughout the South, and he remained friends with Dreiser for the rest of his life. For several years Crawford wrote extensively on socialism and communism, demanding social programs for the poor in the South and Appalachia, and regularly accusing the FDR administration of “making of a servile race” through social programs designed to unjustly prop up corporate capitalism.

In early 1935, financial pressures proved too much. He sold his paper and printing press to his long-time competitor and former employer, the Coalfield Progress, and moved to West Virginia, never again to live in Wise County. 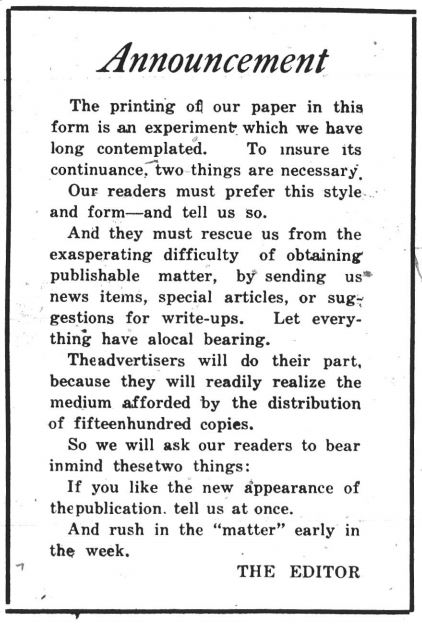 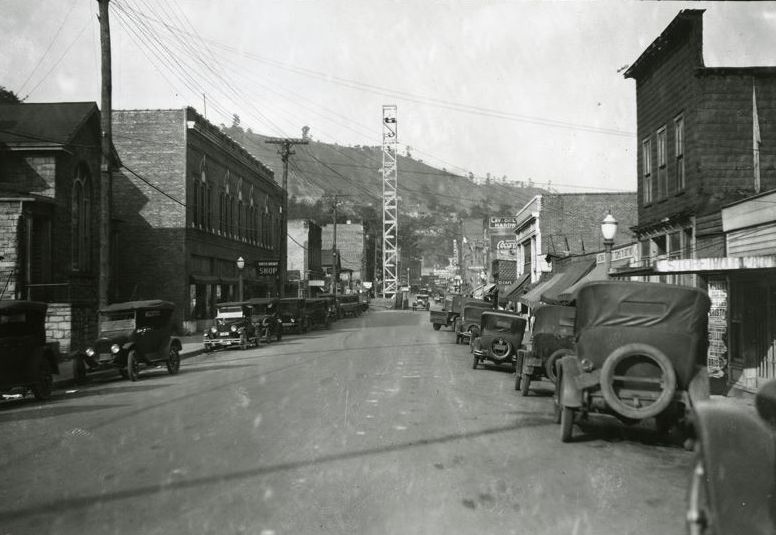 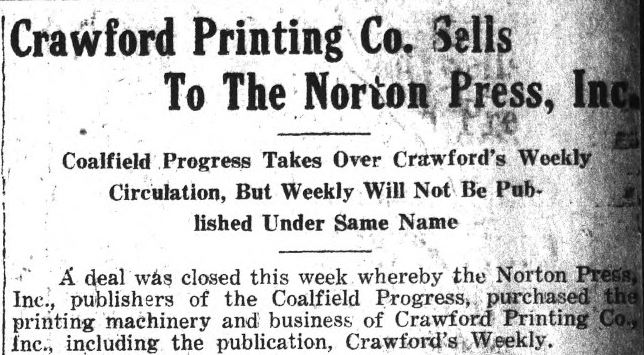 Crawford published his reasons for leaving the newspaper industry in New Masses. With his typical flourish, he left his readers hopeful in the face of capitalism’s overwhelming odds against him:

I have quit publishing Crawford’s Weekly. It was too radical for its bourgeois customers and not radical enough for me. Like capitalism, it was full of contradictions. Hence it could not go on.

Gradually my Weekly began to be a house divided against itself, psychologically. True, it realized that in a society cracking up, there was no use trying to save the so-called democracy whose inherent faults had brought about its collapse; no use being a liberal and trying to follow a middle course when anything right of the Left would precipitate one toward the extreme Right, ultimately. So Crawford’s Weekly, which had always defended labor and the poor, went farther and farther to the Left. And yet it was relying almost wholly for its support on advertisers, small town merchants, local dealers of General Motors, and other “satellites of privilege.” Herein was the two-faced position of the paper. It found itself fighting its customers—an unrealistic, impossible attitude for a business.

So I have let go! I have, for a consideration amounting to a salvage, turned over to my competitor “all that was mortal” of Crawford’s Weekly—its machinery, advertising contracts, and nearly-expired subscription list—and let the rest of Crawford’s Weekly go! If and when a fascist regimentation comes (and what could a weekly paper drawing support from fascist elements do to prevent its coming?), I shall not have any bourgeois attachments that can be laid hold of to cramp my style. I have joined the great unemployed. If I get into trouble and my head cracked, neither customers nor creditors can deplore my activities or accuse me of being recreant to obligations! If I get shot in the leg again, or go to jail, there won’t be that damned feeling of apology to the respectable. Now, as a liberal graduating into radicalism, with the more tangible roots to bourgeois life severed, I hope to know a new and meaningful freedom, whatever the hardships.

–This post comes courtesy of guest contributor Josh Howard, Public Historian for Passel Historical Consultants. His previous projects include work with the National Park Service, the National Baseball Hall of Fame, and the C&O Canal Trust.