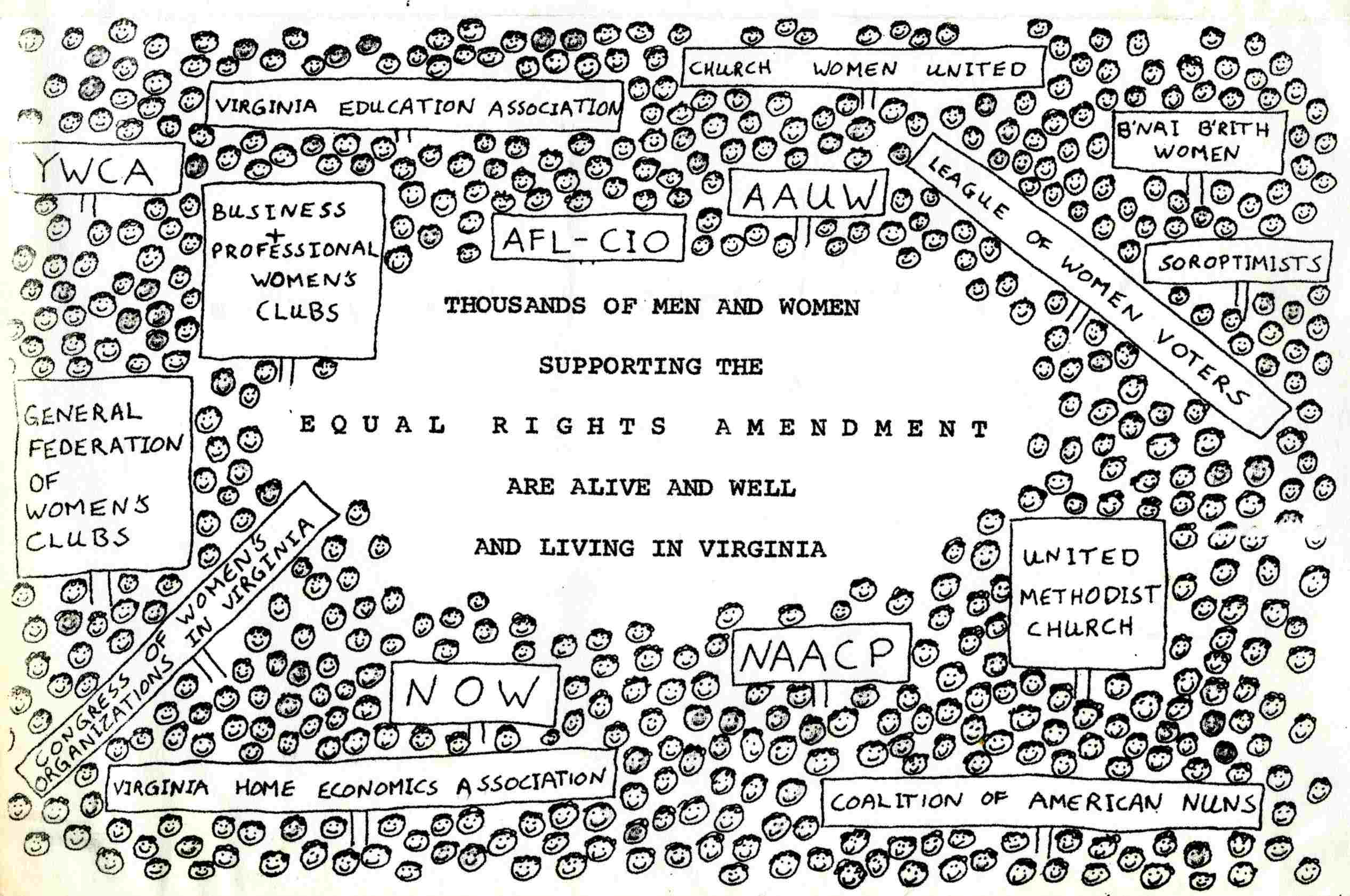 Unfinished Business: The Fate of the Equal Rights Amendment

Although woman suffrage became part of the Constitution with the passage of the 19th Amendment, thousands of men and women in the United States were still disenfranchised by various means. Even women whose ability to vote was unrestricted faced other forms of legal discrimination and were kept from true equality by a number of legal and social barriers.

In 1923, the National Women’s Party, fresh off the victory of the adoption of the 19th Amendment, introduced to Congress what was then called the Lucretia Mott Amendment, stating that “[m]en and women shall have equal rights throughout the United States and every place subject to its jurisdiction.” The amendment was opposed not only by social conservatives, but also by labor reformers who feared that it would wipe out protective labor laws that treated women differently than men. 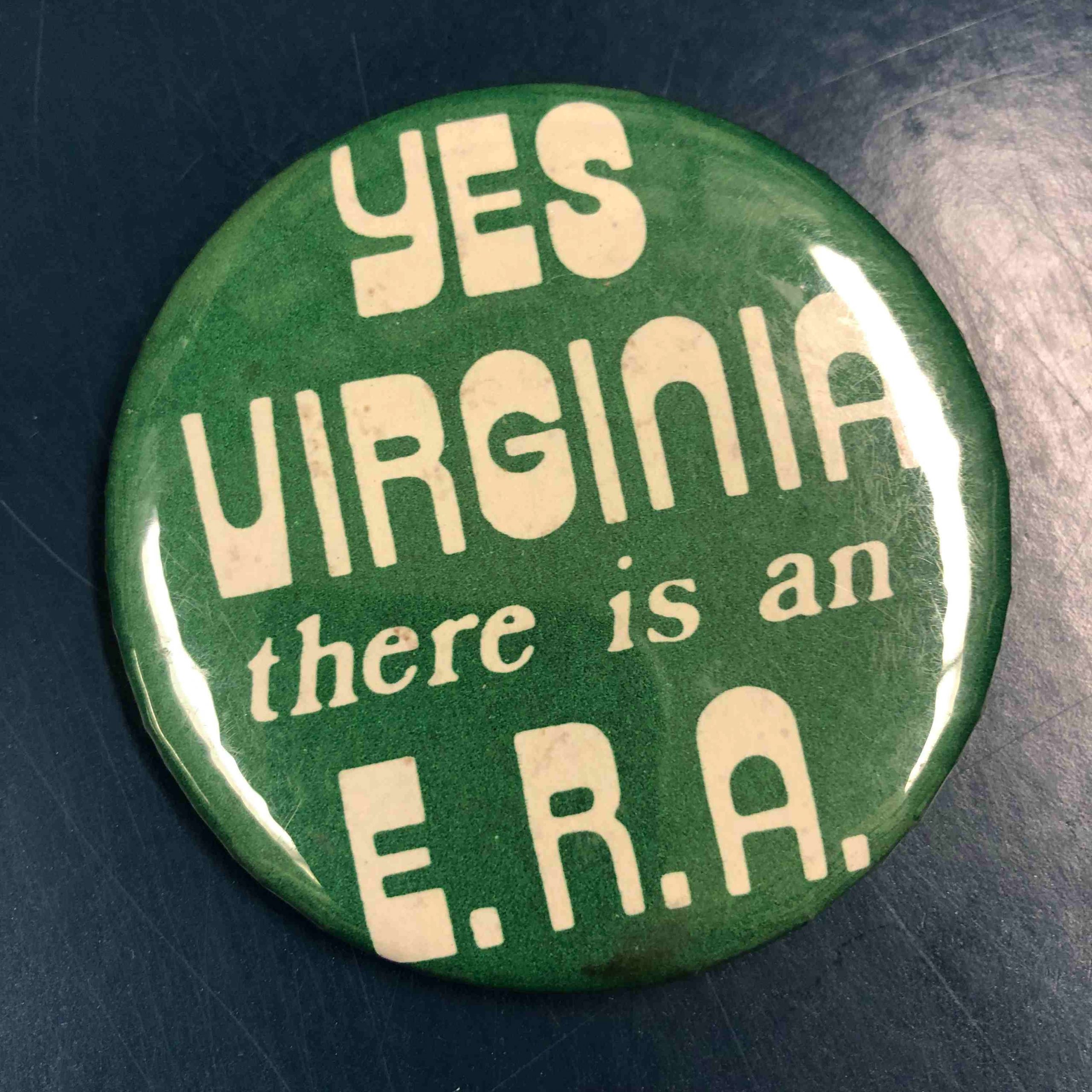 In 1943, Alice Paul rewrote the amendment, which now bore her name, to guarantee that “Equality of rights under the law shall not be denied or abridged by the United States or by any State on account of sex.” In the 1960s, support for the amendment gathered steam as civil rights movements and the feminist movement rocked the country. The Equal Rights Amendment passed the Senate and House of Representatives in 1972, and on 22 March the proposed 27th Amendment was sent to the states for ratification. It included, in the proposing clause of the amendment, a deadline. It would need approval by 38 states before 1978 in order to be ratified.

In the first year, 22 states approved the amendment, but the pace slowed as the amendment faced increasing resistance. Some opponents considered the ERA an unnecessary measure. Others expressed concern about states’ rights issues, viewing the amendment as a federal power grab. Groups like Phyllis Schlafly’s STOP ERA played on the fears of social conservatives in ways that echoed the anti-suffragists. They fretted about the impact on traditional values, theorizing the ERA would allow women to be drafted into combat, create unisex bathrooms, loosen abortion restrictions, allow for homosexual marriage, and abolish gender-specific organizations like the Boy Scouts of America.

Feminist organizations, however, worked hard to ensure ratification. In Virginia, groups like the League of Women Voters of Virginia and the Virginia Chapter of the National Organization for Women supported its passage. The Virginia Equal Rights Amendment Ratification Council, formed in 1974, grew to include 30 different advocacy groups. Rallies in favor of ratification attracted large crowds; marches held in the Januarys of 1976, 1978, and 1982 attracted as many as 1,000, 3,000, and 7,500 participants, respectively. Advocates called representatives, printed pamphlets, and worked to dispel misconceptions surrounding the amendment. 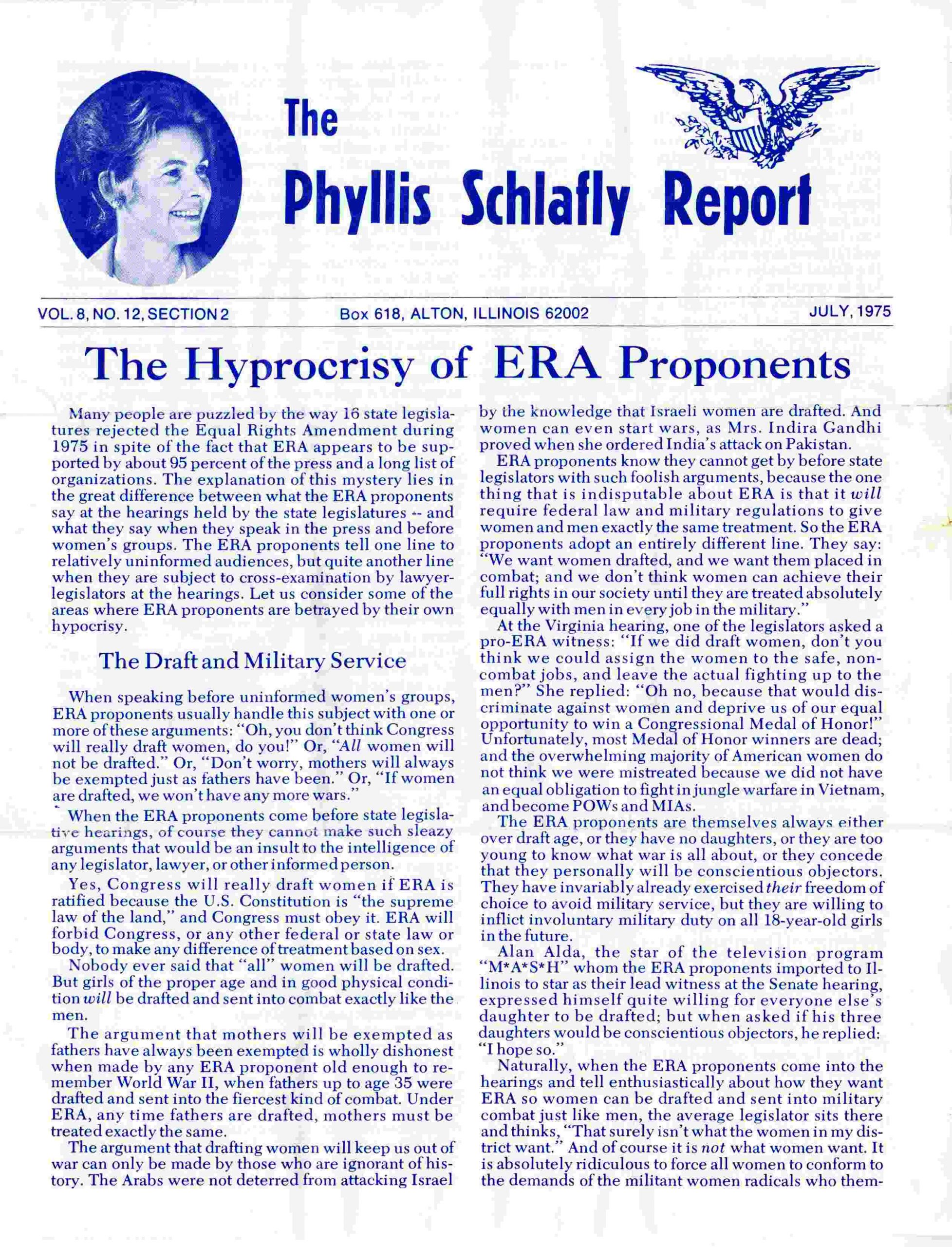 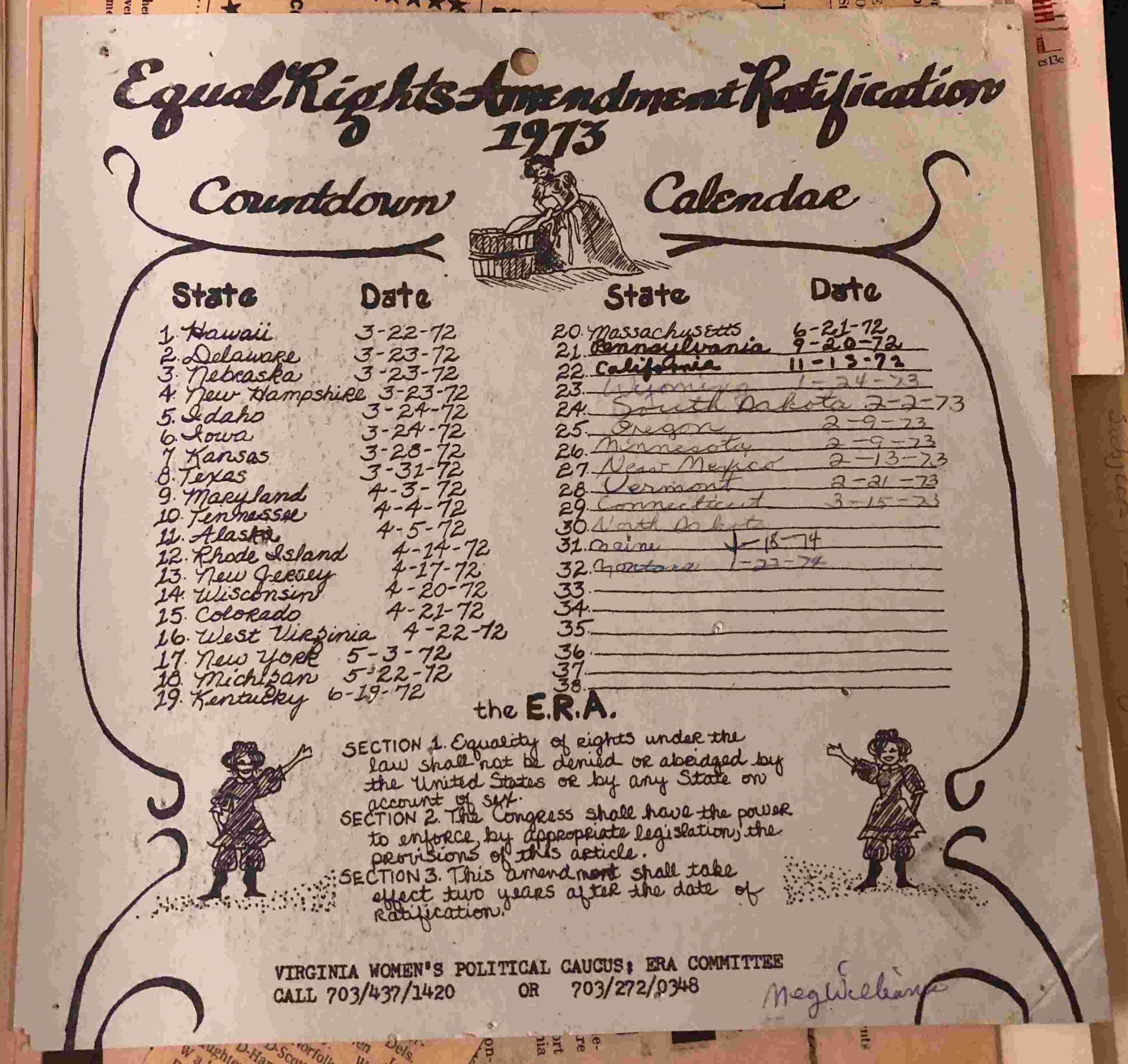 Worksheet, Virginia Women's Political Caucus, tracking states that had ratified the ERA in 1973

Leading up to the original deadline in 1978, advocates began demanding an extension, becoming increasingly militant as they organized pickets, civil disobedience, hunger strikes, and a massive march on Washington, D.C. The deadline was extended until 30 June 1982, but as Ronald Reagan’s election in 1980 solidified the rise of the conservative right, the ERA seemed to be slipping away. In 1977, 35 states had ratified the amendment—Virginia was not among them. No additional states ratified the amendment before 1982, and in fact five states rescinded their earlier ratifications. 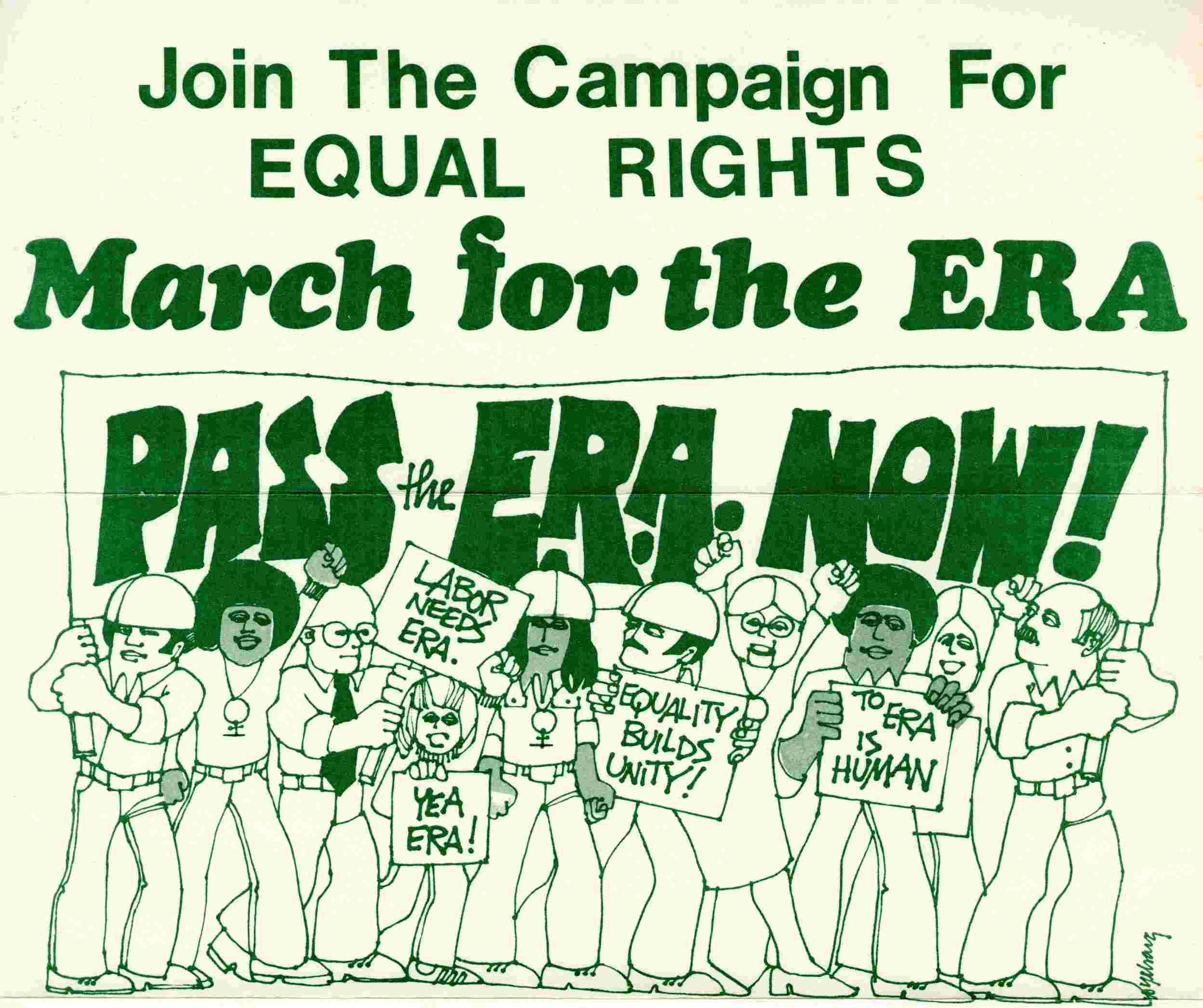 Flyer for an ERA march sponsored by Labor for Equal Rights Now (LERN), 1980

The ERA has recently gained new momentum, particularly in the wake of the #MeToo movement and the wave of women being elected following the 2016 presidential election. Nevada and Illinois approved the ERA in 2017 and 2018, respectively. In 2019 Virginia’s Senate approved the ERA, but a House of Delegates subcommittee failed to clear the bill for a floor vote. However, after the 2019 elections gave Democrats majority control of both houses of the Virginia legislature, ERA ratification resolutions HJ1 and SJ1 passed in their respective chambers on 15 January 2020. On 27 January 2020, Virginia became the 38th state to ratify the Equal Rights Amendment. However, it is still unclear how and when the amendment could be made part of the Constitution. ERA supporters have not lost hope, and continue to fight for the amendment.

Check out the rest of this series by clicking on the We Demand: Unfinished Business button below.