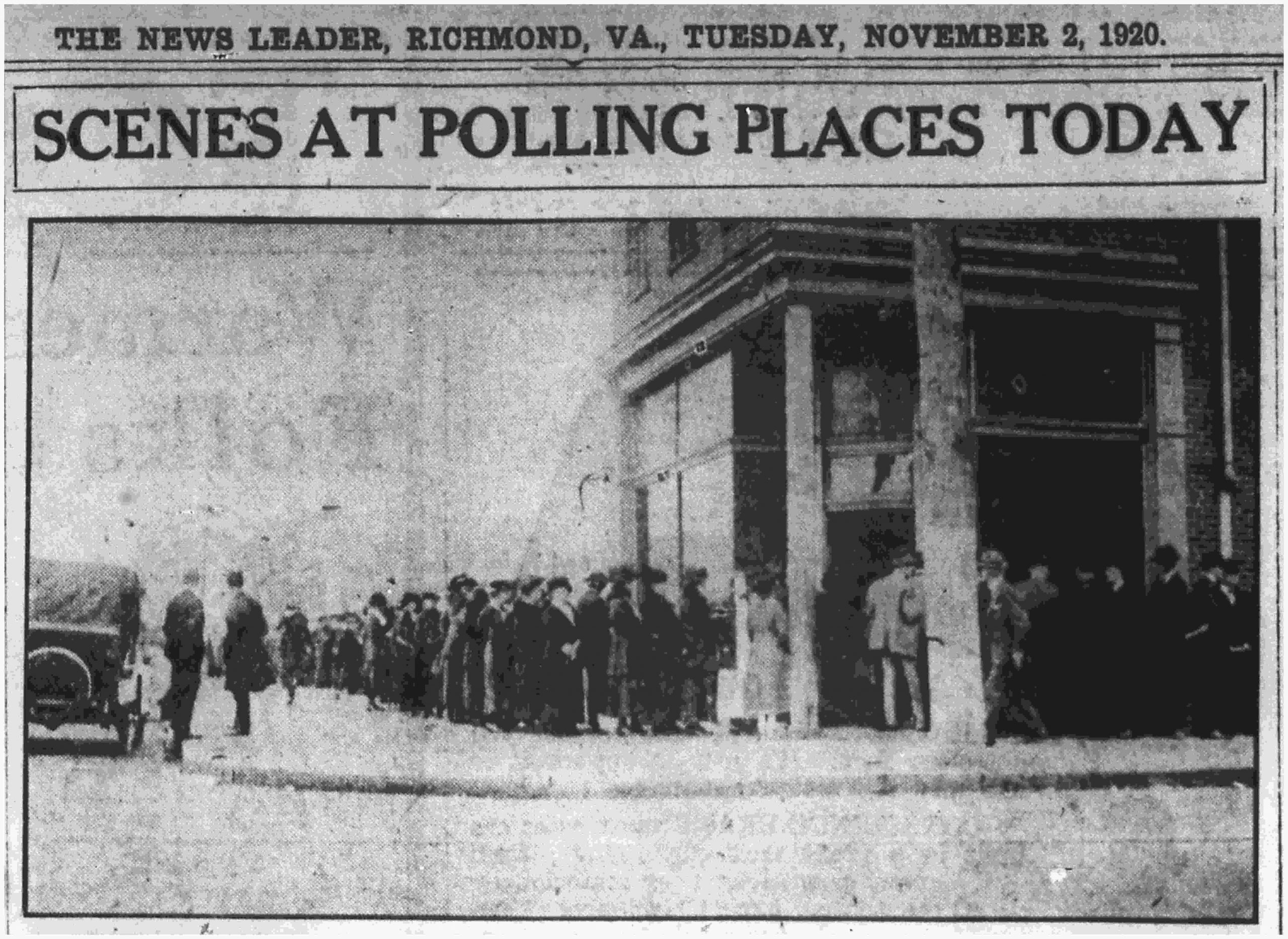 “A day of triumph and dignity”: Virginia Women Vote in 1920

By Mari JulienneNovember 2, 2020No Comments

Virginia women went to the polls for the first time on 2 November 1920, a cool and cloudy day across the commonwealth. After the Nineteenth Amendment was ratified in August, between 75,000 and 100,000 white and African American women registered to vote during September. Approximately 77,000 women turned out for the presidential election in November. On that day they had to select from three presidential candidates: Republican Warren G. Harding, Democrat James M. Cox, and Socialist Eugene V. Debs. They also had to elect a United States senator, a congressman from each of ten districts, local officials in some communities, and vote for or against six proposed amendments to the state constitution.

The Richmond News Leader published photographs on election day of women and men standing in line, including at this polling place at the corner of Harrison and Broad Streets.

In Martinsville, a woman gave her husband marching orders first thing in the morning. “Put on your collar and your coat,” she instructed him. “This is a day of triumph and dignity.” After many years of campaigning for equal suffrage, women in Virginia were ready to cast their ballots. “Three women were the first to cast their vote in the first ward,” reported the Alexandria Gazette, “being at the polls before the men.”

In Norfolk, Blanche Winder may have been the first woman to vote. She and her husband arrived at the same time poll workers began setting up for the day. The Richmond Times-Dispatch reported that 71-year-old Mary Donahoe had “the distinction of being the first voter to cast a ballot in the Third Precinct, Clay Ward. She arrived at the voting place long before the polls opened.” Former Equal Suffrage League of Virginia members Adèle Clark and Nora Houston arrived at their polling place in Richmond at 5:30 a.m. to vote and begin a daylong campaign to monitor the voting. Sarah Wormeley, Marie Leahey, and Clark borrowed League president Lila Meade Valentine‘s automobile to make “a tour of the polling places, working like veteran ward workers” for the Democratic ticket. Valentine, unfortunately, was too ill to leave her house to vote, which must have been a severe disappointment to the state’s most prominent suffragist.

The afternoon paper in Roanoke, the World News, described the scenes at local precincts where “the women literally flocked to the polls.” The report described voters coming “on street cars, in buggies, on foot, and in autos.” Families also came together, including a daughter with her mother and grandmother as well as husbands and wives and brothers and sisters who stood side by side in the long lines.

Blanche Bailey Winder (1875−1950) may have been the first woman to vote in Norfolk, certainly the first in her precinct. Typically for the time, she was identified in the caption by her husband's initials as Mrs. W. J. Winder.

The next day, the Roanoke Times announced that “Roanoke Women Voted Yesterday As If They Had Voted For Years.” A later newspaper reported, “A number of business houses and department stores gave their women employees the privilege of reporting late so that they would have every opportunity to cast their ballot and do it early in the day. As [a] result it was notable that voting lines at the polls were divided about fifty-fifty as between men and women.” In fact, official reports indicate that more women than men voted in Roanoke that day. 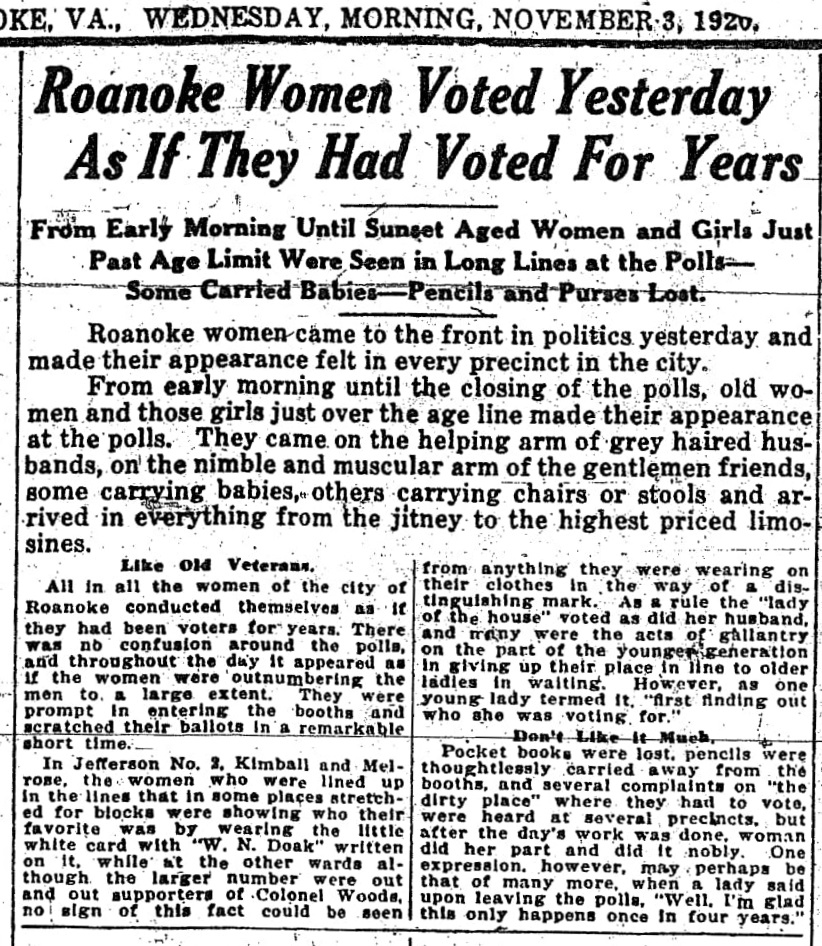 The Roanoke Times described women's first experiences of voting as successful, although some of the new voters were less enthusiastic than others.

The Roanoke correspondent for the Richmond Planet, an African American newspaper, concluded a report on voting in Roanoke with praise for the work of the city’s Colored Women’s Republican Club and its president, Millie B. Paxton: “Everybody seemed in the best of humor and long will be remembered that long line of old and young colored women on November 2 in Roanoke.” 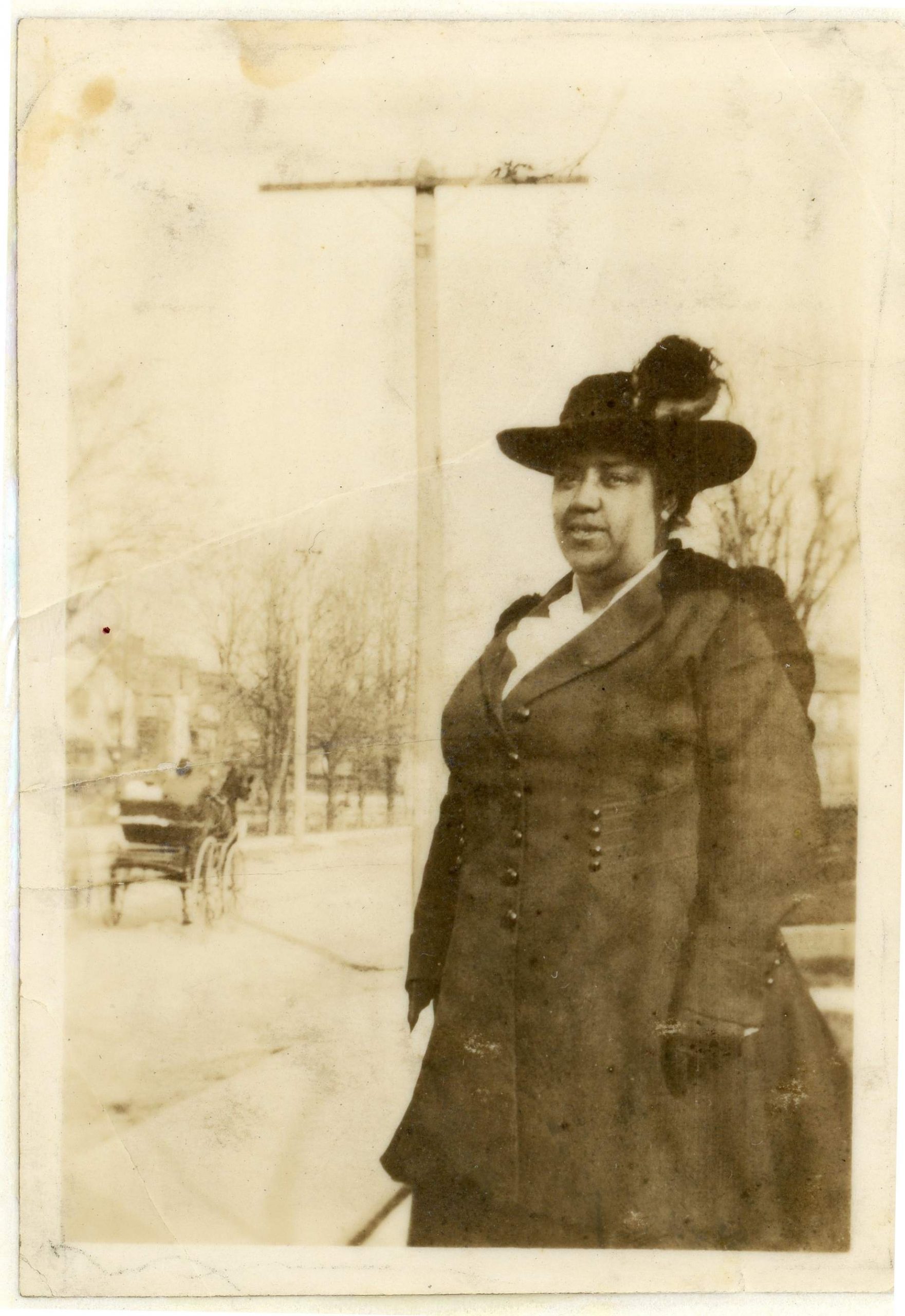 Photograph courtesy of the Gainsboro Branch of Roanoke Public Libraries.

In Danville, “for the first time in a quarter of a century,” African American voters “appeared at the polls.” The Lynchburg News declared that this “had the effect of spurring into action white men and women who had previously shown no great interest in the campaign.” Men and women of both races stood in line together to vote. That offended some white people. A Newport News lawyer wrote to the governor in the spring of 1921 and complained that it was “intensely disagreeable for our wives and daughters to have to stand in a long line of white and colored men and women before they can proceed to vote.” He suggested passage of a law to require judges of election to form black and white voters into separate lines and allow voters to cast their ballots from each line alternately. He pointed out that members of both races would be “treated exactly alike”—separate but equal.

Some newspapers published photographs showing long lines of women waiting to vote. Male reporters around the state regarded voting women as a true novelty, but few of them thought it important to ask the women what they thought about casting their first votes or report what the big day meant to them. Former Equal Suffrage League vice president Jessie Townsend of Norfolk was one of the few prominent suffragists to leave a record of casting her first vote. Her account is remarkably undramatic and lacks all sense of the personal importance and revolutionary character of the occasion. “Have just returned from voting in my precinct,” she began a long handwritten letter to League secretary Edith Clark Cowles at 4:30 in the afternoon, “& want to bustle around town now & see what’s what.” She criticized the men who supervised the voting at her precinct for allowing campaign workers closer to the polling place than the law allowed, “but everything was quiet & orderly.” 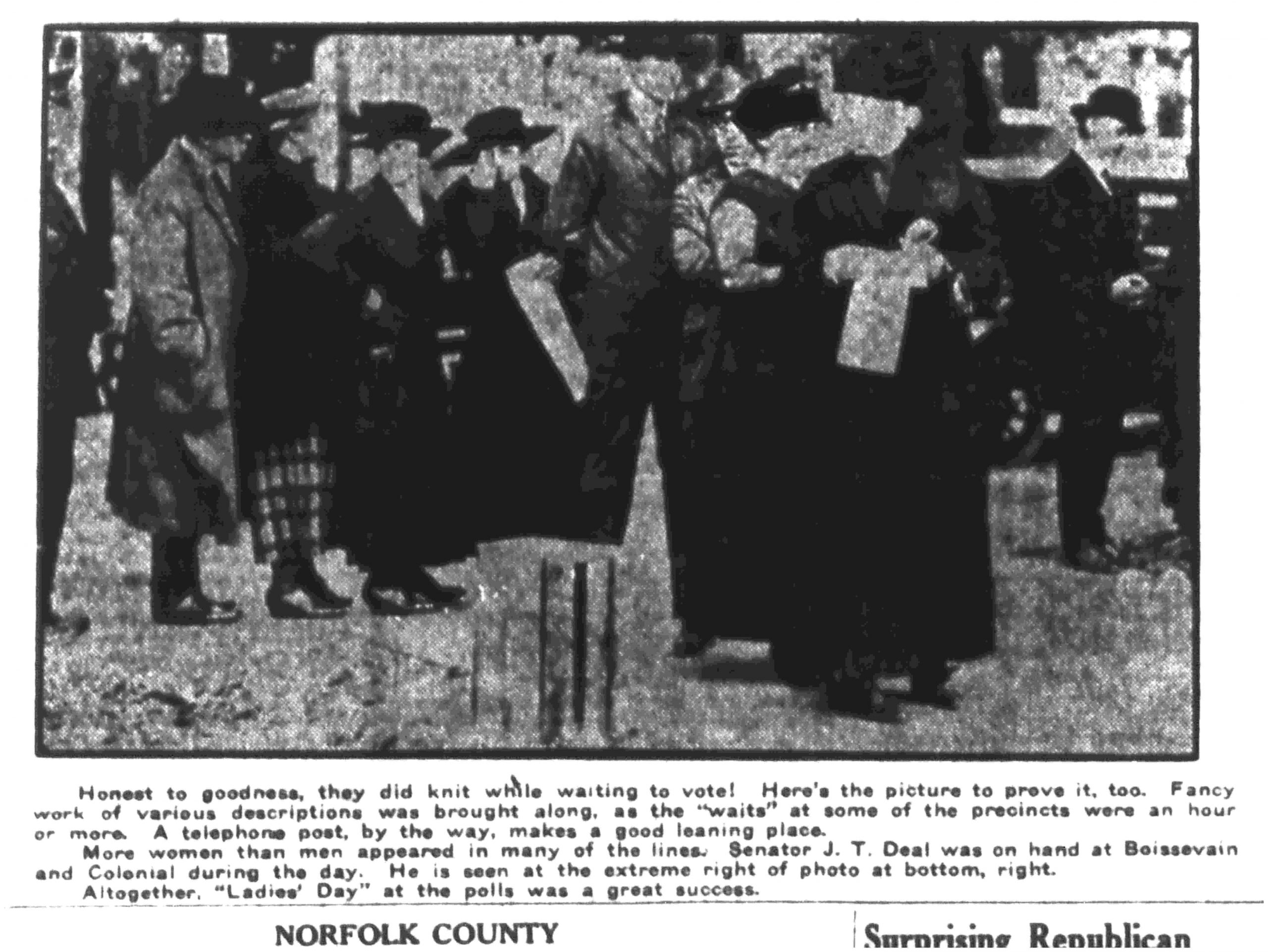 The Norfolk Ledger-Dispatch expressed surprise that women would bring knitting with them while they waited in line to vote.

The author of an editorial in the Richmond Times-Dispatch on the day after the election could not refrain from taking a glancing shot at the Nineteenth Amendment. “Whether or not one approves the method by which they were enfranchised,” he observed of the women of Richmond, and “whether or not one approves their presence in politics, no one will be so churlish as to deny the patent fact that they have more than made good in this, their first, campaign, and their first opportunity to back up their opinions with their ballots.” He continued in a pleasantly surprised tone, “Throughout the entire campaign they have been active, vigilant and tireless. They have comprised in large measure the audience at every party rally. They qualified and registered in unexpected numbers, and for twenty-four hours every day they have been on the job; assisting the registrar, straightening out the inevitable tangles resultant upon so heavy an increase in the electorate, and in arousing dormant enthusiasm.”

The editor of the Roanoke World News similarly praised “the way in which the women of Virginia acquitted themselves in their first experience in voting. The new voters, whether they had previously wanted the ballot or not, considered the privilege of voting a serious responsibility.” He correctly surmised that “soon even the opponents of woman suffrage will get used to the idea, and will begin to wonder why they have not been there all the time.”

Winning the right to vote in 1920 was one step in the long campaign for universal suffrage in the United States. The fight continued for Native Americans, African Americans, and other people of color for decades, and some Americans continue to face challenges in freely exercising their right to vote. Throughout the history of the United States, Americans have recognized the value and significance of the ballot and having a voice in government. As one woman in her eighties was heard to remark after waiting in a long line in Norfolk on election day in 1920, “I wouldn’t have had the vote for a million dollars, but now I’ve got it, I wouldn’t have missed it for a million dollars.”

The Library’s exhibition, We Demand: Women’s Suffrage in Virginia, has reopened and has been extended until May 28, 2021. The Library is currently open Tuesday through Friday, 10:00am−4:00pm. Visit the We Demand website for more suffrage resources, or learn more about the suffrage movement in the Library of Virginia’s book The Campaign for Woman Suffrage in Virginia (The History Press, 2020), which is available from The Virginia Shop. For more information about what the Nineteenth Amendment didn’t accomplish, visit the Library’s Unfinished Business exhibition.

by Mari Julienne and Brent Tarter, co-authors of The Campaign for Woman Suffrage in Virginia