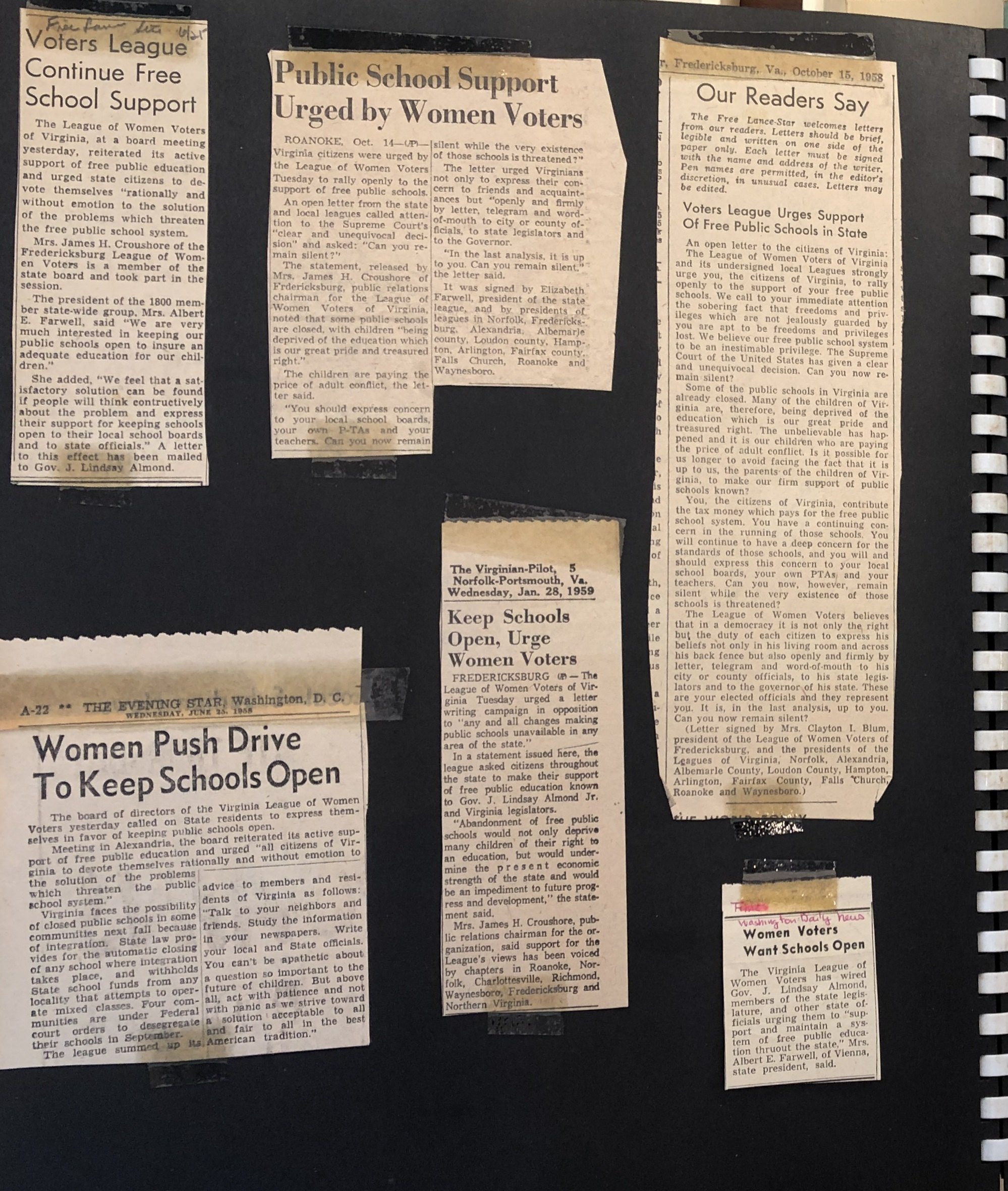 With the ratification of the Nineteenth Amendment and the achievement of woman suffrage, the Equal Suffrage League of Virginia closed down its operations in the autumn of 1920. Many of the women who had spent the previous decade fighting for their voting rights were ready to continue their advocacy work in the political sphere instead. In September 1920, League members held a convention at the Capitol in Richmond. It was reportedly the first political meeting of women held in the hall of the House of Delegates, where suffrage amendments to the state constitution and ratification of the federal amendment had met with defeat multiple times. After Kate Langley Bosher read the Nineteenth Amendment to the assembled crowd, Equal Suffrage League vice president Elizabeth Lewis declared “There are your marching orders!” The approximately 100 attendees vowed to lead voter registration efforts across the state, and also appointed a committee to draw up a constitution for a new organization to be affiliated with the National League of Women Voters. 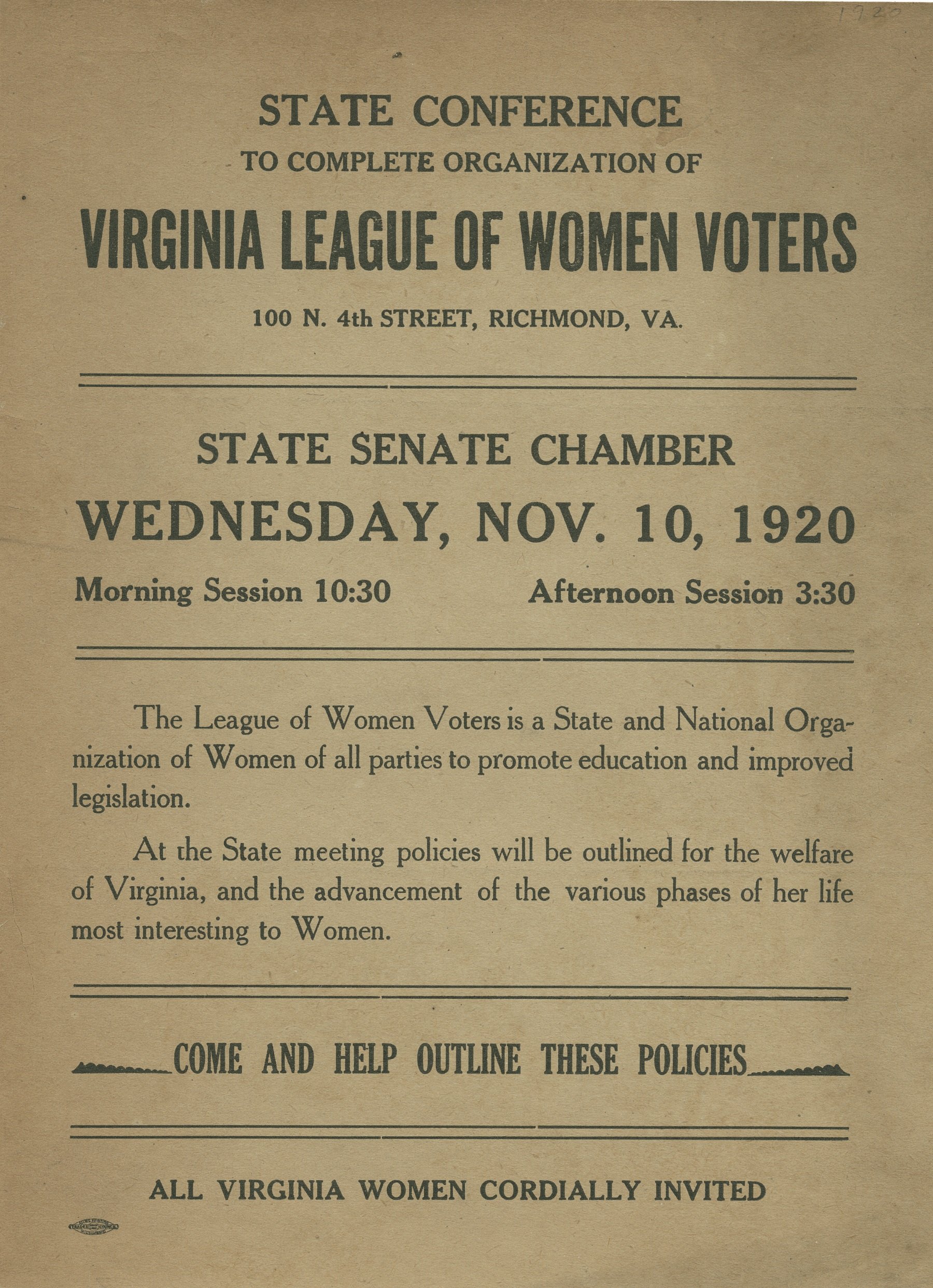 The Virginia League of Women Voters issued a public call for women to attend the organizational meeting in November 1920.

Months before ratification, National American Woman Suffrage Association (NAWSA) president Carrie Chapman Catt had organized the League of Women Voters as a non-partisan group to educate women about the voting process and prepare them for political participation. Members of the Equal Suffrage League, which had been a NAWSA affiliate, embraced this new mission. On 10 November 1920, former ESL vice president Jessie Townsend presided over an organizational meeting in the Senate chamber of the Capitol. Equal Suffrage League founder was elected chairman of the new Virginia League of Women Voters.

Just as the Equal Suffrage League had taken great pains to distance itself from the more radical suffragists of the Virginia branch of the National Woman’s Party, the Virginia League of Women Voters declared that it had no intention of organizing as “a separate woman’s party, but as an earnest and serious body banded together for civic betterment and the welfare of the community in which they live.” Like the national league, the Virginia league was non-partisan and expressly stated in its constitution that the league would not support any political party. 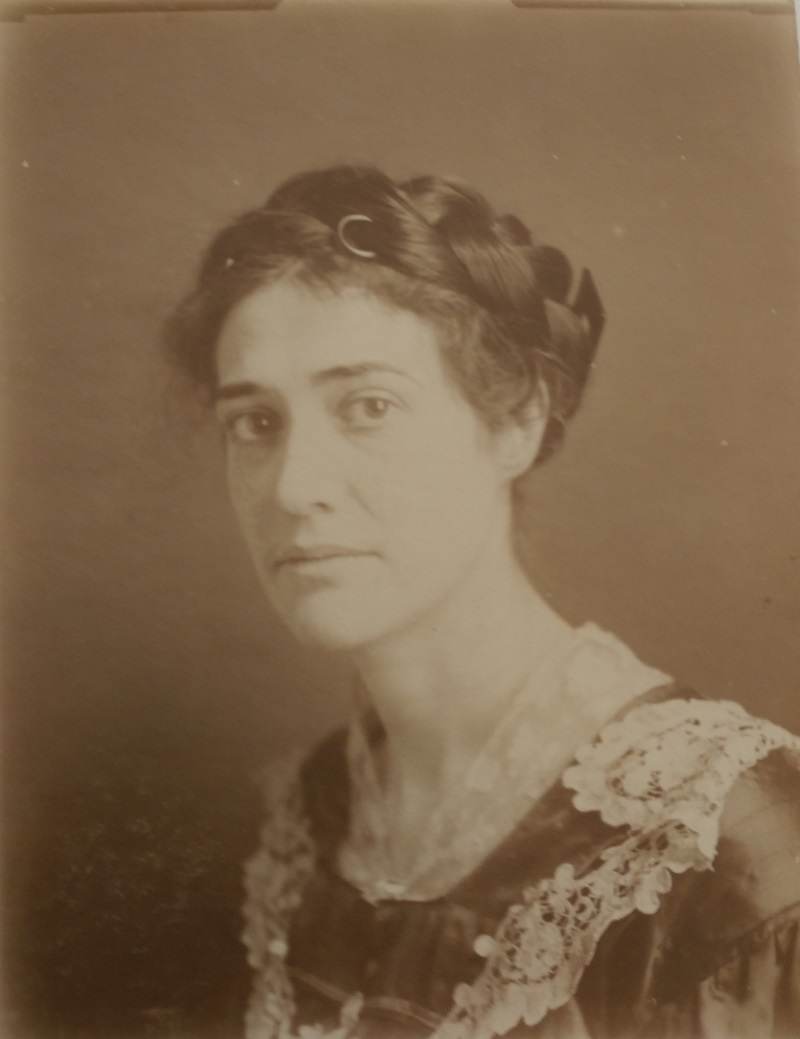 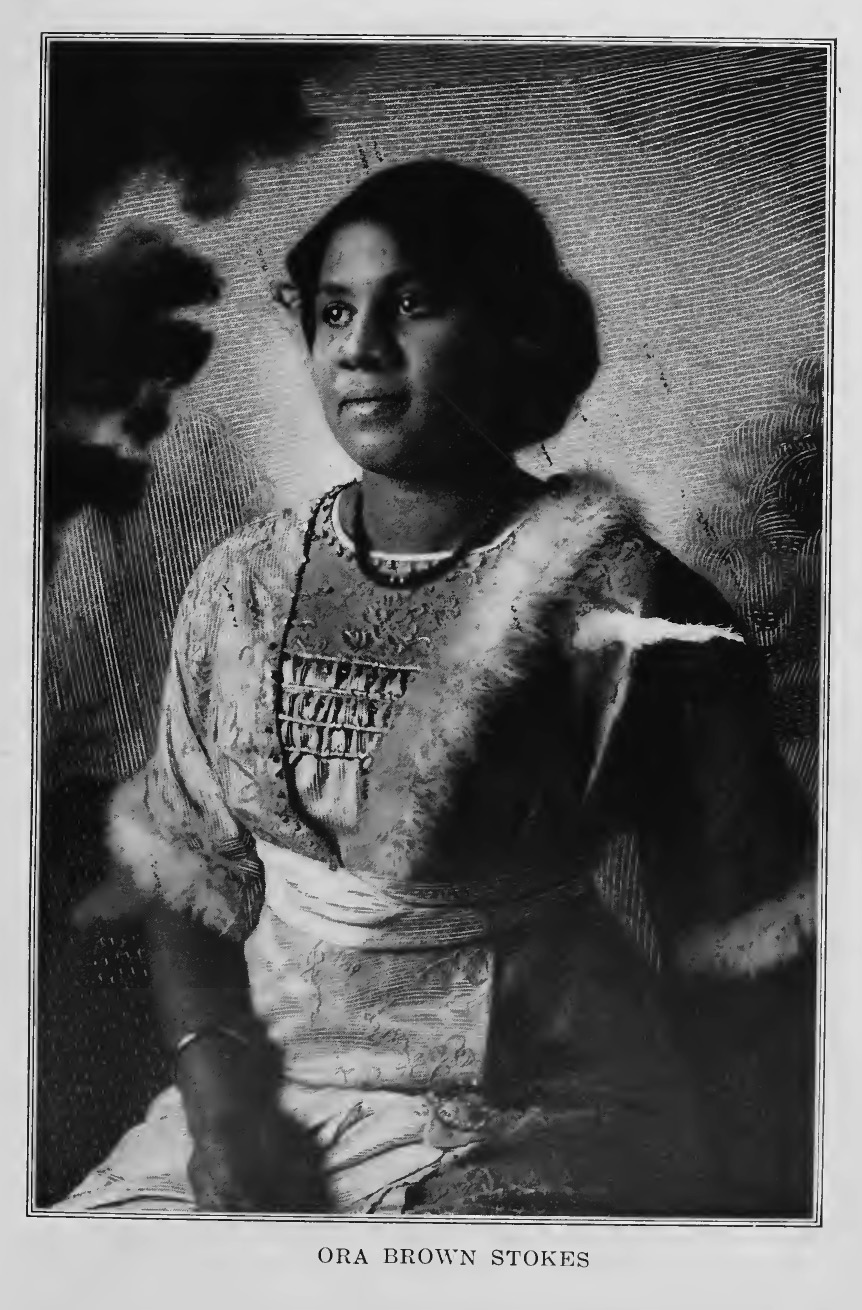 Social worker and women's rights advocate Ora Brown Stokes was president of the Negro Women Voters League of Virginia in the 1920s.

Photograph from A. B. Caldwell, ed., History of the American Negro: Virginia Edition (1921).

African American women were forced to establish their own voter organizations since the Virginia League of Women Voters did not accept them as members in the same way that Virginia suffrage groups had excluded Black suffragists. In Roanoke, Millie B. Paxton established a Republican women’s club in the autumn of 1920. Community activist and suffragist, Ora Brown Stokes, who helped lead a massive voter registration drive of African American women in Richmond, organized the Negro Women Voters League of Virginia, although little is known about its activities or how long it was in existence. In February 1921, she joined delegates from the NAACP at the convention of the National Woman’s Party in an unsuccessful attempt to convince its leaders to urge Congress to address issues of discrimination against women voters, particularly African Americans. In 1922, Stokes was one of the few Black women who attended the convention of the National League of Women Voters, which had very few African American members and did not begin to challenge restrictive voter registration laws until after World War II.

In August 1920, Equal Suffrage League recording secretary Roberta Wellford attended a National League of Women Voters course on citizenship and organization. Appointed field director for the new Virginia League of Women Voters, she began traveling around the state to help organize local chapters. Mary Elizabeth Pidgeon, took charge of the league’s Citizenship Institute at the University of Virginia, and for several years led citizenship schools there and in other localities to prepare women to vote. 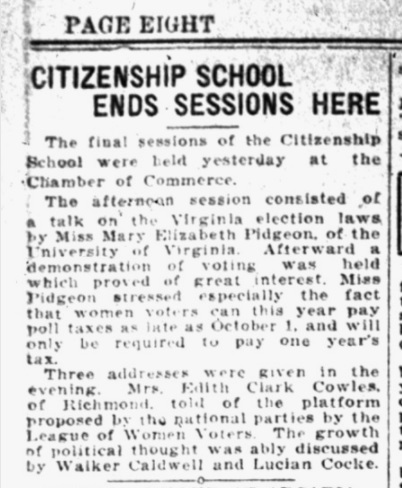 Even before the Nineteenth Amendment was ratified, Virginia suffragists had started organizing Citizenship Schools, such as one on Roanoke held in May 1920. The Virginia League of Women Voters continued to sponsor such schools during the 1920s through the University of Virginia's extension division. 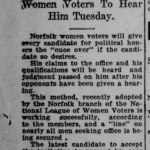 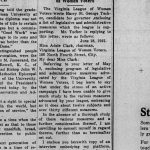 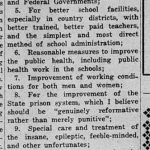 Since its founding, the League of Women Voters has published candidates’ responses to surveys on legislation supported by the league, such as this response from unsuccessful gubernatorial candidate Henry St. George Tucker in 1921. The league also sponsored public events for political candidates to share their views, such as this one held by the Norfolk League of Women Voters during the Democratic primary in 1921. Images: Norfolk Post, June 17, 1921 and The Peninsula Enterprise, July 09, 1921.

The commission proposed 26 bills at the 1922 General Assembly session, including pensions for mothers, a compulsory school attendance law, establishment of a new state welfare board, and regulation of child labor. The assembly passed those and other measures, such as requiring fire escapes in public schools, creating a children’s bureau within the state department of health, and appropriating matching funds for the federal Sheppard-Towner Act (a priority of the National league) to provide prenatal and child care for rural women. Fear of losing such protective legislation led Virginia league members to oppose the Equal Rights Amendment advocated by the Virginia branch of the National Woman’s Party during the decade. Also at the insistence of the Virginia League of Women Voters, the governor called for a conference in 1921 on efficiency in government that ultimately led to several reforms in state government. The Virginia league also began holding public forums with candidates for elective office, which has remained a hallmark of the league’s support for a well-informed electorate into the 21st century. 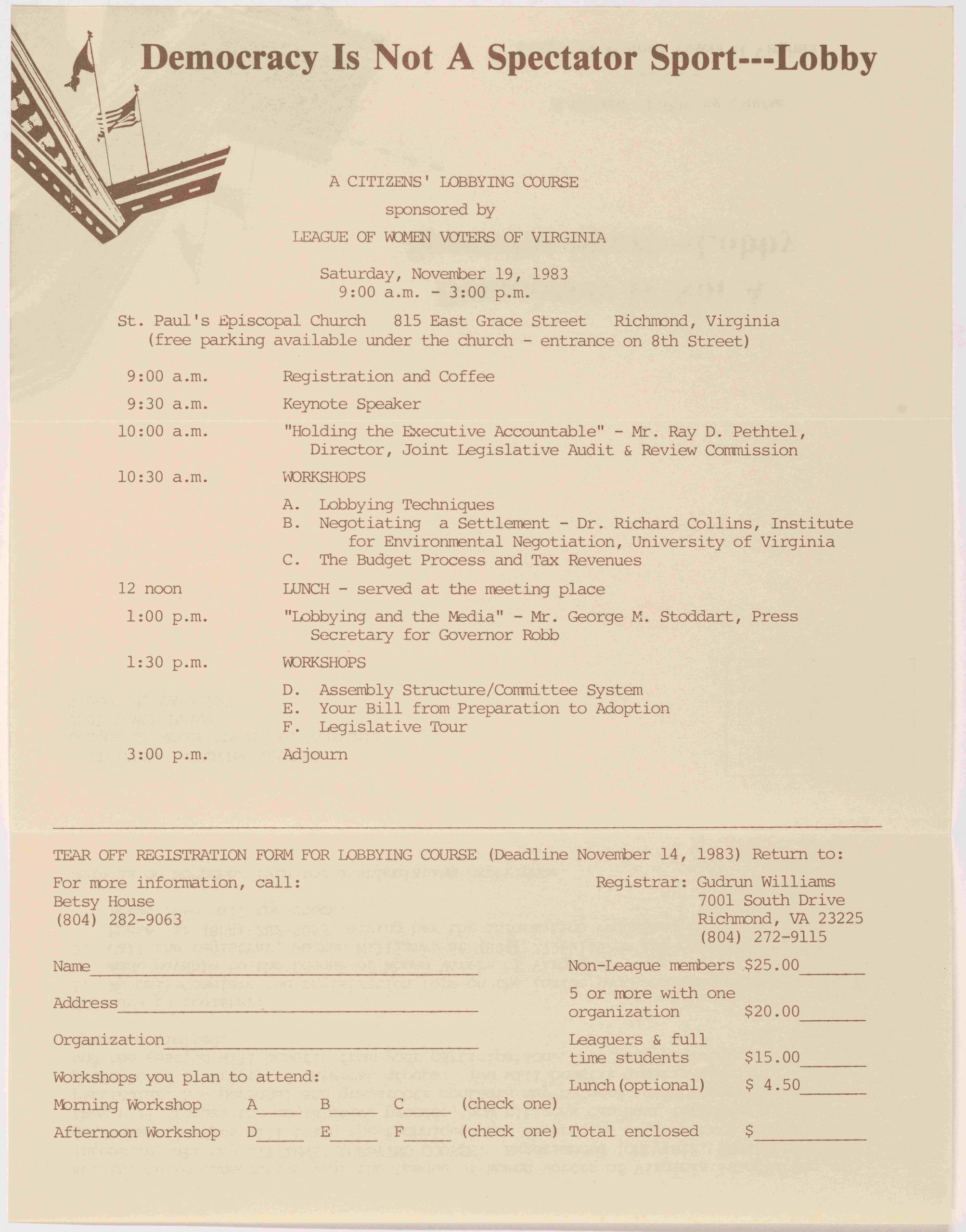 Providing training for citizens to lobby state legislators has been an important part of the work of the Virginia League of Women Voters.

During the 1930s the Virginia league continued to advocate for shorter working hours for women, a minimum wage, and increased appropriations to the health, labor, and education departments. League membership declined dramatically, however, and the state league largely ceased operating during the Great Depression, when national membership also dropped. In the 1940s, the League of Women Voters of Virginia was reorganized and began establishing new chapters around the state. Although the Virginia league did not accept integrated chapters until the 1960s, some local leagues became outspoken advocates in the 1950s for keeping the public schools open when Virginia’s policy of Massive Resistance to desegregation threatened public education and some schools were closed.

Since its founding, the League of Women Voters of Virginia has encouraged all citizens to participate in the political process and worked to increase understanding of major public policy issues through education about and advocacy for a wide variety of issues, including public education, quality child care, the environment, health care, equal pay, and voting rights, much of which is documented in the League of Women Voters of Virginia Records (Acc. 39487 and Acc. 22002) at the Library of Virginia.

-Mari Julienne, co-author The Campaign for Woman Suffrage in Virginia

The Library’s exhibition, We Demand: Women’s Suffrage in Virginia, has reopened and has been extended until 28 May 2021. The Library is currently open Tuesday through Friday, 10:00am−4:00pm. Visit the We Demand website for more suffrage resources, or learn more about the suffrage movement in the Library of Virginia’s book The Campaign for Woman Suffrage in Virginia (The History Press, 2020), which is available from The Virginia Shop. For more information about what the Nineteenth Amendment didn’t accomplish, visit the Library’s Unfinished Business exhibition.

Virginia league members created scrapbooks documenting their work. Clippings on this page show the league’s support for keeping public schools open when the state threatened to close them rather than desegregate following the U.S. Supreme Court’s 1954 ruling in Brown v. Board of Education. League of Women Voters of Virginia Records, Accession 39487, Library of Virginia. 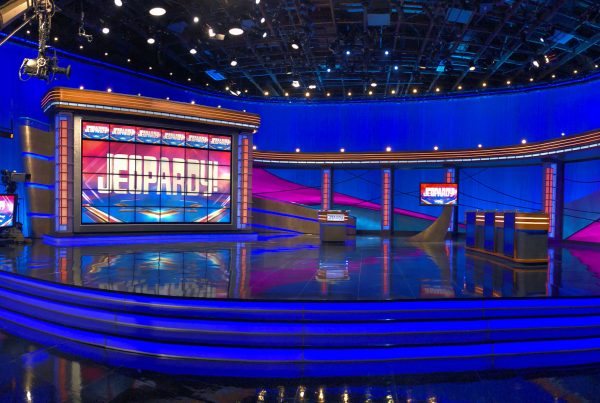 Unfinished Business: How Young is Too Young to Vote? 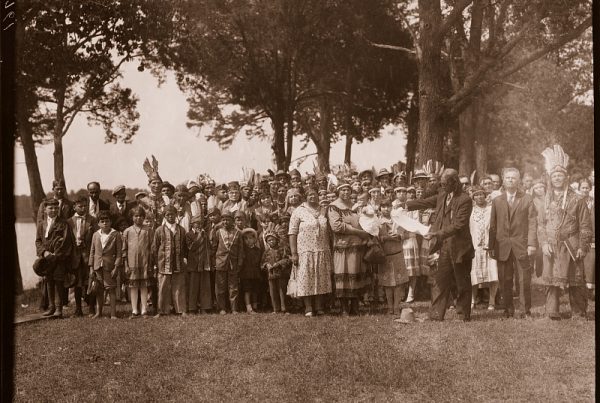