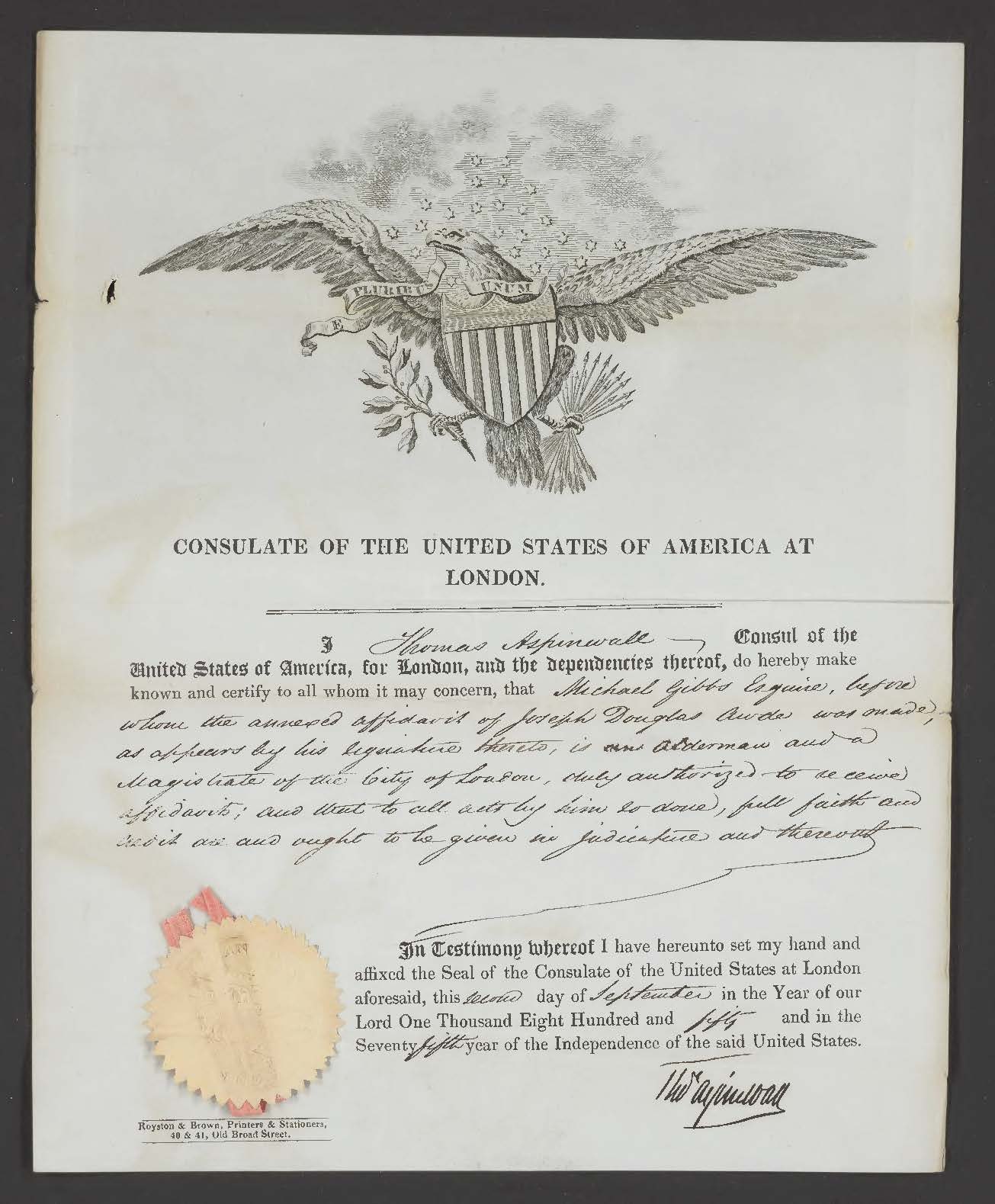 By Vince BrooksNovember 18, 2020No Comments

“Why should Pennsylvania, founded by the English, become a colony of aliens who will shortly be so numerous as to Germanize us instead of Anglify them, and will never adopt our language or customs any more than they can acquire our complexion.”

A few chancery suits recently caught my attention that bring to light an aspect of immigration history that is both interesting and a potential boon to family history researchers. These suits introduced me to the concept of “alien property disabilities” or “alien land laws.” Put more simply, non-naturalized or non-resident immigrants could not own property in Virginia even by inheritance. If a foreign national, either living in America or still living abroad, wished to inherit property in Virginia, they were required to declare their intent toward citizenship and then be naturalized within five years of the testator’s death or else the property could be escheated by the Commonwealth.

Immigration to America has been both encouraged and discouraged in a seemingly endless cycle. Quite often, these sentiments seem to be expressed simultaneously! Consequently, the legal and legislative history of America’s immigration rules are dense and complex. There are countless books and journals which attempt to delve into the topic, but this blog post is not one of them. In other words, I’m no immigration history expert. Rather, this post will discuss three chancery court cases which illustrate an aspect of that push-pull character, using the broadest of brushes to characterize the immigration system of the Early Republic and Antebellum eras.

In England, a relative few wealthy Englishmen with sworn loyalty to the king owned land, which was then leased to those lower down the social and economic ladder. Property ownership was a privilege for the few and not a right of the many. This was both a feudal hold-over and a national security policy. In a time of national defense, the king wanted to be sure that landholders were playing on his team.

Despite the American Revolution, the fledgling U.S. still followed a great deal of English common law. The common law of property defined ownership as an aspect of citizenship. These concepts became less tied together as the years went on, in part due to federal territorial land policies and their influence on the rewriting of state constitutions. The Land Ordinances of 1784 and 1785 along with the Northwest Ordinance of 1787 began the gradual removal of these restrictions. America had a great deal of land that needed settlement; however, land ownership was still explicitly limited to free white males in most cases. One author on this topic suggests that this expansion of property ownership opportunities in the Early Republic and antebellum eras contained the seeds of discrimination that would later be enshrined in state constitutions in the late 19th and early 20th centuries (i.e. exclusion of Asian immigrants and efforts to prevent in-migration of Blacks).2 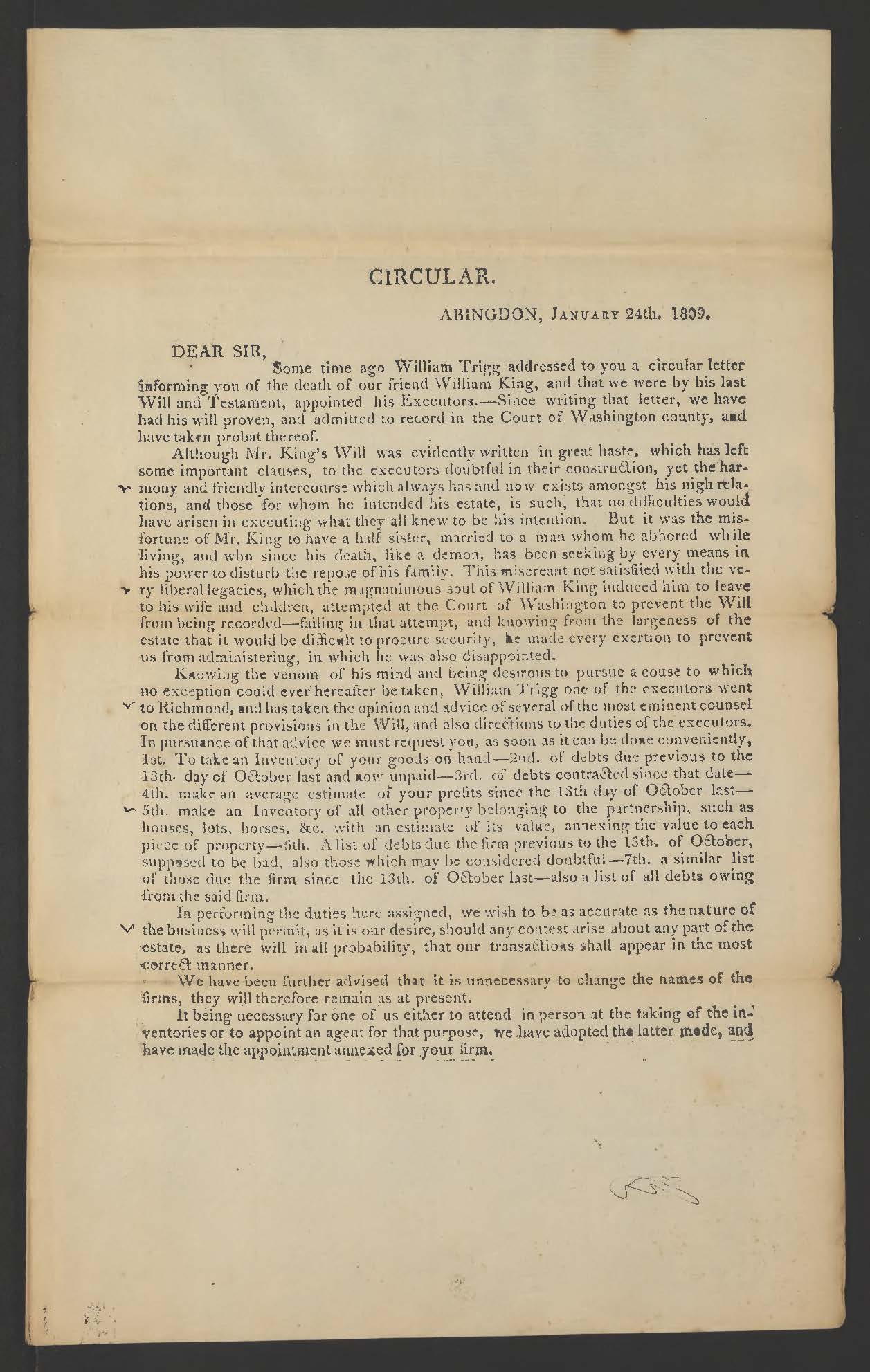 During the Early Republic, English legal traditions like tenure obligations, primogeniture, and coverture began to disappear, but “alien property disabilities” remained. Land ownership was the purview of the states, making for a patchwork of laws and rules governing ownership. Similarly, the states developed their own procedures for naturalization. Generally, these required a declaration of intent, a term of residency, affidavits to one’s character, and a formal request for naturalization by the court, but states varied in the terms of residency and other aspects of the process.

In the Augusta County chancery cause Samuel King &etc. vs. Exrs. Of James King, 1825-009, the plaintiffs were half-blood siblings of William King (d. 1806) and they were suing in the district court of Augusta County concerning King’s extensive estate in Washington County, Virginia, Tennessee, and Mississippi. The defendants, King’s siblings of the whole blood, charge that Samuel King and Hannah (King) Allen were “alien born natives of Ireland” and thus unable to inherit property. Samuel and Hannah counter-claimed that some of the whole-blood relatives were not naturalized. A declaration of intent and naturalization from the Washington County court was submitted as an exhibit. Other documents in the case make reference to emigration dates and the like, which can be of great interest to family historians. The suit remained contentious though. King’s executors went as far as producing a circular calling Mrs. Allen’s husband, William King’s brother-in-law, “a demon” and “a miscreant.”

Also in Augusta County, a case styled Recv(s) of Nicholas C. Kinney etc. vs. Admr. of Jeremiah Aude etc. 1857-082 provides a great deal of genealogical information. Jeremiah Aude emigrated to the U.S. from England and, despite never fulfilling the requirements for naturalization, inherited land and property from a friend. It’s worth noting here that in spite of the “alien land laws,” non-citizens did own property in Virginia either due to ignorance or non-enforcement. The Legislative Petitions database contains numerous petitions by Virginia residents who acquired property despite not being naturalized. They asked the General Assembly’s help to remove this legal disability and allow them to retain their property. As one can see it play out in the Aude suit, without full property rights, the dispersal of an estate gets very, very complicated.

Aude eventually owned a substantial amount of real and personal estate in Augusta County estimated to be worth $14,000-$17,000 (approximately $470,000-$570,000 today). Since he died without a will and had no wife or children, his heirs were entirely resident or non-resident aliens, thus unable to inherit land. The 300-page case is a Gordian knot of inheritance and citizenship laws, and involves documents from Ohio, Illinois, and all over England. Any descendant of the Aude family will find nearly 100 pages of baptisms, marriages, and burials from various English localities and two descendant charts– a genealogical goldmine!

A different scenario played out in Petersburg chancery cause Heirs of Jean Pierre Cauvy vs. Admr. Of Jean Pierre Cauvy, 1807-001, illustrating the complexity of immigration history and the nuance of “alien property disabilities.” Jean Pierre Cauvy was a businessman operating Cauvy & Co in Petersburg. He acquired a considerable estate, but died unmarried and without children. His only heirs, married and unmarried sisters, resided in Montpellier, France. They appealed to the court-appointed administrator William Haxall to release the estate to their lawyer, but (perhaps due to uncertainty about citizenship status) he demurred. The heirs brought suit against Haxall citing Article XI of the Treaty of 1778 between the United States and King Louis the XVI, and Article VII of the Convention of 1800 between the United States and the French Republic. Both clauses permitted citizens of one nation to acquire property in the other nation “ab intestato, without being obliged to obtain letters of naturalization, and without having the effect of this provision contested or impeded under any pretext whatever.”

Even with this official reciprocity between the U.S. and France, the plaintiffs in the Petersburg suit had to prove their relationship to Cauvy. To accomplish this, they submitted copies of numerous French vital record documents, and a genealogy chart! Another family history researcher jackpot.

The fledgling United States needed immigrants to come and settle its vast expanses of land, and the possibility of land ownership was a draw for many who emigrated. In the pre-industrial era, land ownership was directly tied to citizenship and prosperity. Today, in an industrial economy, many immigrants come to the U.S. for educational opportunities and jobs and not necessarily to acquire land and remain as citizens; thus, immigration and naturalization are no longer as closely tied together as they once were.

Records such as these chancery causes illustrate the successes and challenges of this earlier era of immigration. And, given the nature of these particular suits, they offer a great deal of information and copies of foreign records to family history researchers.