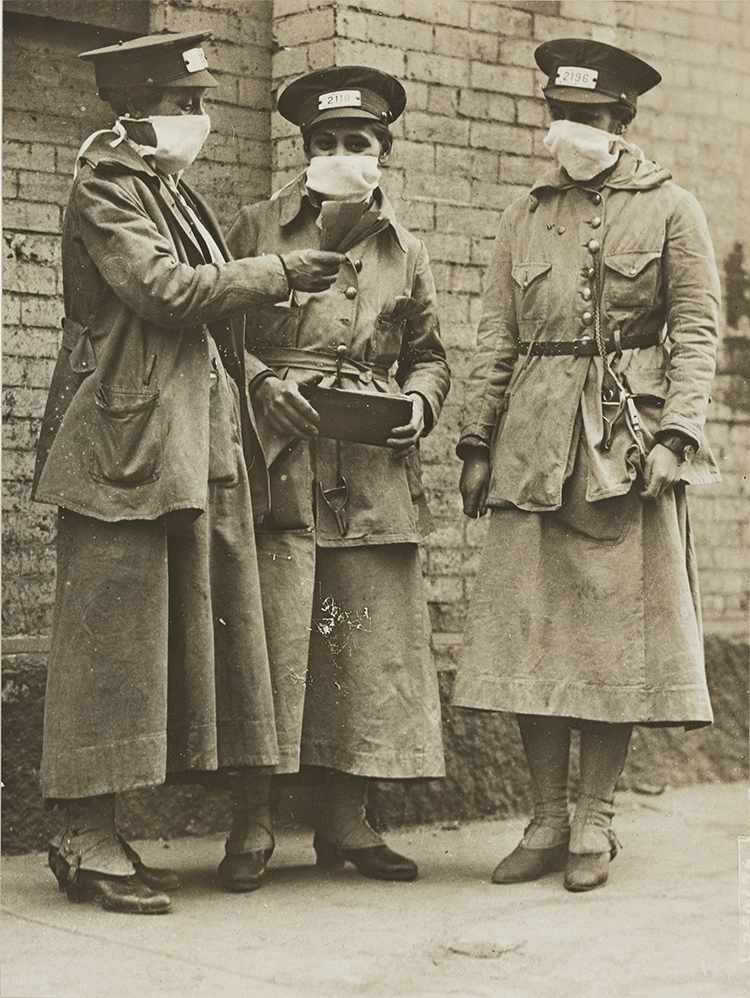 “More Americans Killed By Flu Than By Bullets”: Riding the Roller Coaster of the 1918–1919 Influenza Pandemic

As the world enters 2021, we continue to ride a roller coaster of news (and emotions) regarding the COVID-19 virus. Our smart phones provide almost limitless information at our fingertips, allowing us to take this ride constantly if we choose. While downloading apps to my new cell phone over the holiday I began to wonder how newspapers—the primary source for news a century ago—presented information during the influenza pandemic of 1918–1919. I thought Norfolk, Virginia, would be interesting to examine because of its prominent role in World War I as a naval port and point of embarkation for soldiers heading to Europe.

By the autumn of 1918, America’s entry into the First World War had helped turn the tide, ultimately leading to the war’s end that November. The influenza pandemic that first struck the country in the spring of 1918 was entering its second (and far more deadly) wave in September. For several months, readers of the daily Virginian-Pilot and Norfolk Landmark would ride their own roller coaster, waking up to good news one day, bad news the next, and often contradictory information along the way.

On 14 September the Pilot headlined a front-page article, “Spanish Influenza May Get Foothold in the United States” as cases were being seen in eastern cities. (It was common then to identify it as the “Spanish Flu” in a mistaken belief that it had originated in Spain. Although scholars are not completely sure where exactly it originated, the first cases in the U.S. likely occurred at an army camp in Kansas in the spring of 1918.) That day also brought disturbing news that sailors on a recently arrived steamer had the flu (not understanding the basis of the influenza, contemporaries rarely used the word virus). 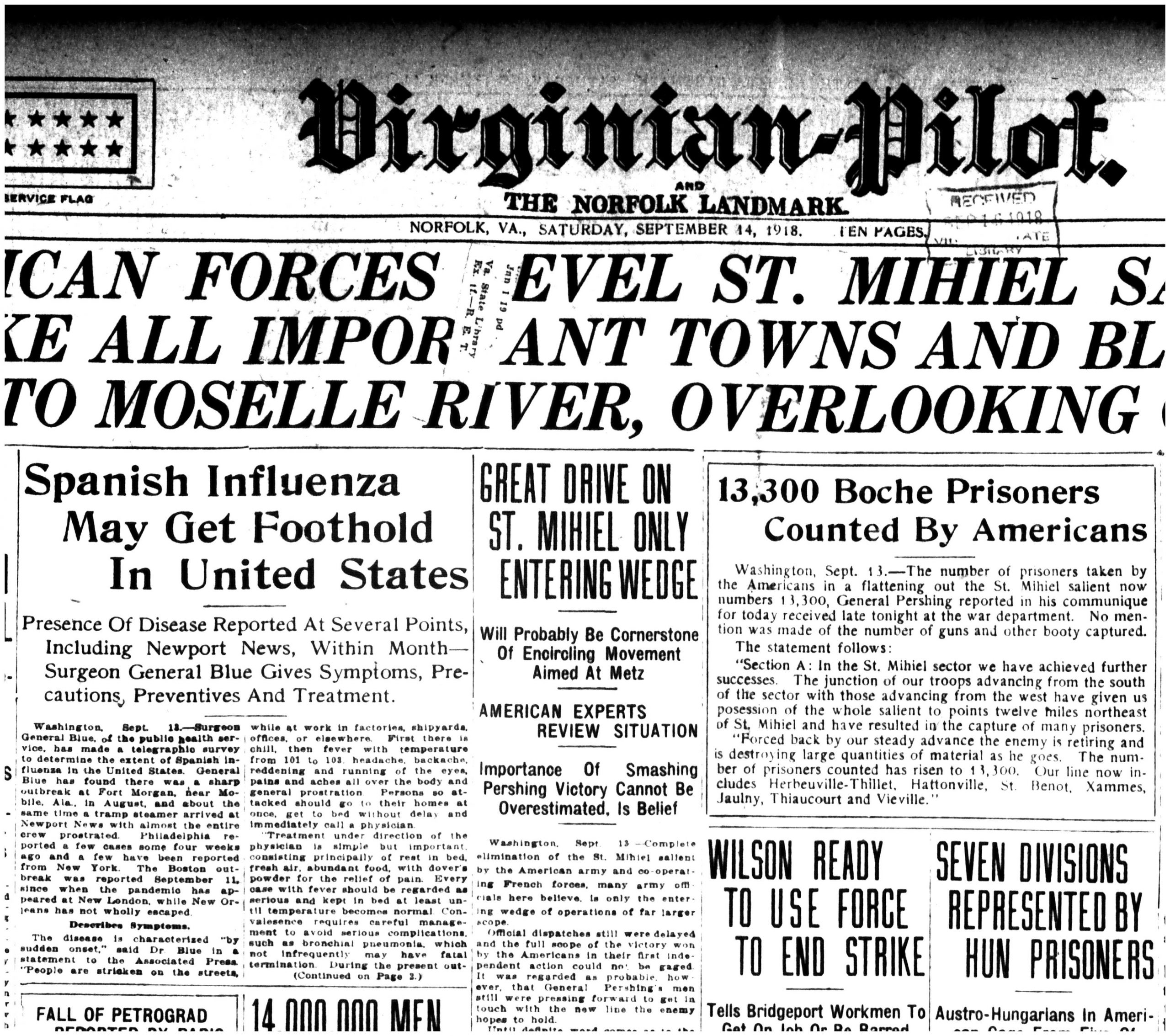 Dr. Rupert Blue, surgeon general of the United States, warned that the flu could strike suddenly with symptoms that included a fever, headache and backache, and watering of the eyes. There was no cure, he acknowledged, so little could be done for those stricken other than convalescing in bed in a warm, well-ventilated room and getting plenty of food and fluids. For pain he recommended taking Dover’s powder, a common pain reliever at the time containing ipecac and opium. Explaining that the flu was transmitted via “secretions from the nose, throat, and respiratory passages,” he noted that it could lead to bronchial pneumonia and perhaps death. If an epidemic (during this period “pandemic” was rarely used) broke out, Dr. Blue instructed Americans to steer clear of crowds and avoid “promiscuous coughing and spitting” in public.

During these early days, Norfolk’s health commissioner Dr. Powhatan W. Schenck expressed doubt that the influenza would strike the region, but believed that even if it did it would be not serious. If encountering someone who was coughing, sneezing, or talking excessively loud, he advised, a common handkerchief held up against the mouth and nose would “render one practically immune from the disease and .  . . attract very little attention.” 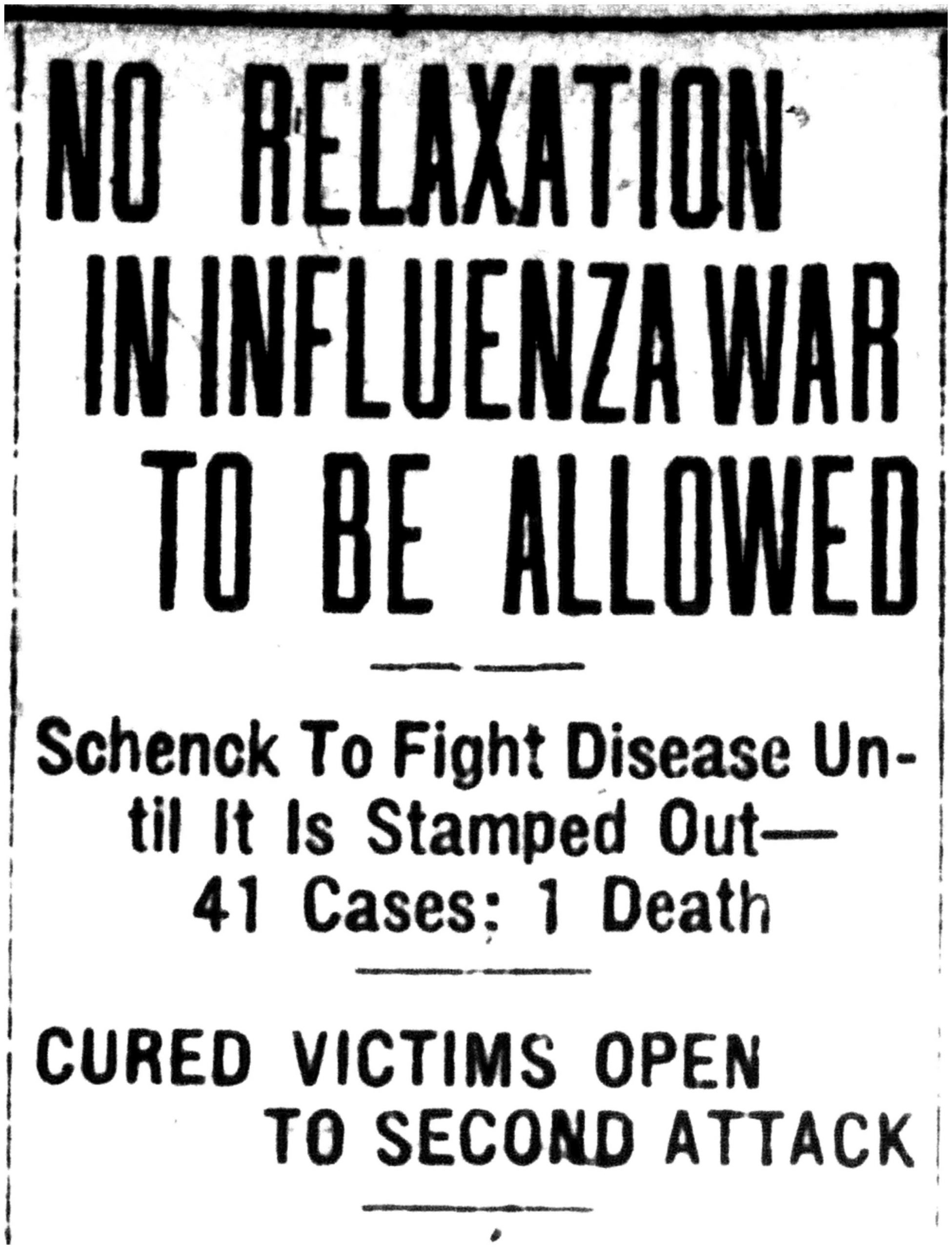 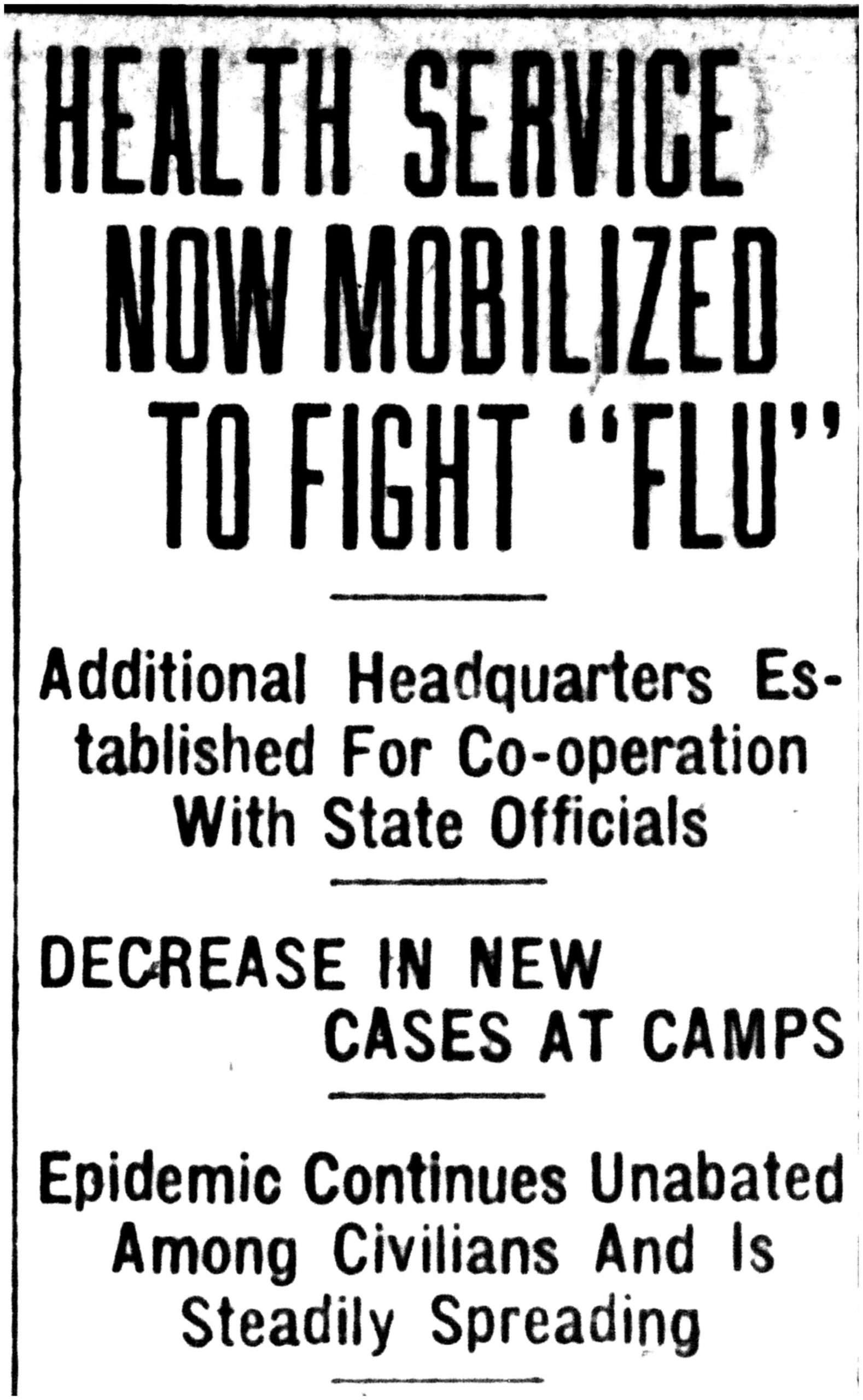 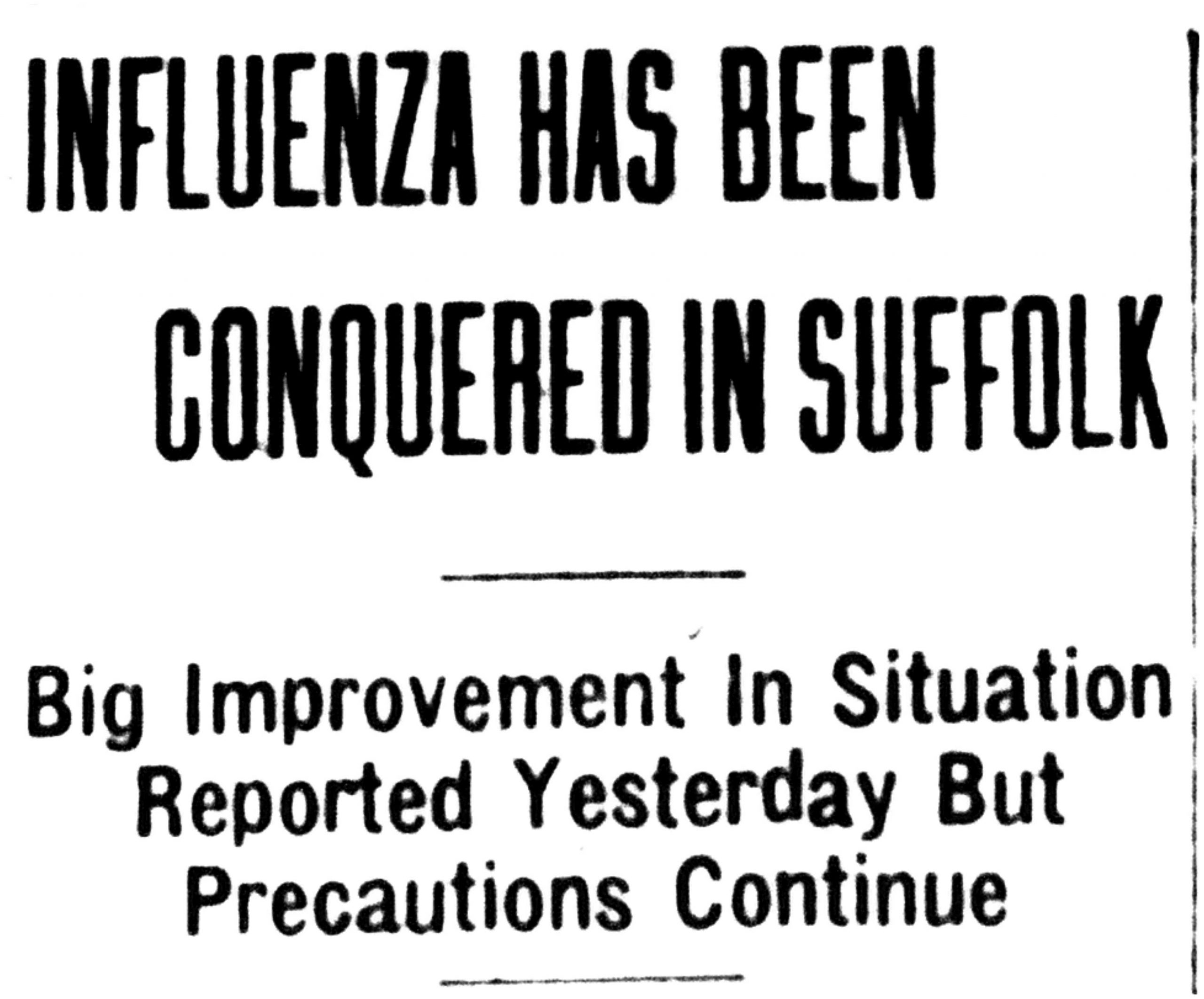 Influenza cases increased gradually throughout September. The rhetoric describing the epidemic mirrored the world conflict, as the influenza “invaded” states across the nation, cities were fighting an “influenza war,” “health services mobilized to fight flu,” and localities eventually “conquered” the flu. Influenza cases in Army training camps skyrocketed. The Pilot reported on 21 September that cases at Camp Lee (now Fort Lee), a major training facility near Petersburg, numbered 1,211. Several days later cases had risen to more than 2,500 and caused six deaths, including George Betty, a 28-year-old Norfolk attorney who had joined the army just two months prior. The local Red Cross worked to produce gauze masks for soldiers and entreated Norfolk women to make them at home.

The Pilot reported Norfolk’s first 17 cases on 26 September, though health commissioner Schenck believed this flu strain to be “overrated.” He did note that a central difficulty involved people with mild cases unknowingly infecting those around them. Two days later, 15 new cases were announced as well as the city’s first death, a “popular young man” named John H. Pierce, Jr. His death and the rising number of army camp deaths signaled that this influenza strain would be unusual in the significantly higher death rates of healthy young adults. To curb the influenza’s spread, Dr. Schenck recommended wearing a gauze mask or handkerchief in public places or streetcars, the latter being the primary means for transportation for war-related workers. To reduce the spread of germs by children, the state board of health distributed school posters instructing students not to cough or sneeze on anyone and “don’t put in your mouth fingers, pencils, or anything else that does not belong there.”

On 29 September the Pilot reported that a new vaccine had been developed by the army’s medical department in the “war on influenza” and that the federal government’s public health service as well as the Army and Navy would be overseeing distribution. This and other promised vaccines never materialized, however. When a vaccine didn’t emerge, it wasn’t long before patent medicines makers turned the flu to their advantage.

Among many others, Laxative Bromo Quinine advertised that it would be wise to take its tablets before one got sick (and in greater amounts than usual). Not surprisingly some of these “miracle cures” could be quite harmful. Dr. Schenck blamed some influenza-related deaths on patent medicines produced with coal tar derivatives (a by-product of coke and coal gas production) that could weaken the heart. Perhaps desperately, “much abused booze” was offered to treat influenza patients by Norfolk’s commonwealth’s attorney, who ordered that whiskey confiscated by police (Virginia had enacted statewide prohibition in 1916) be distributed to physicians for sale to patients. 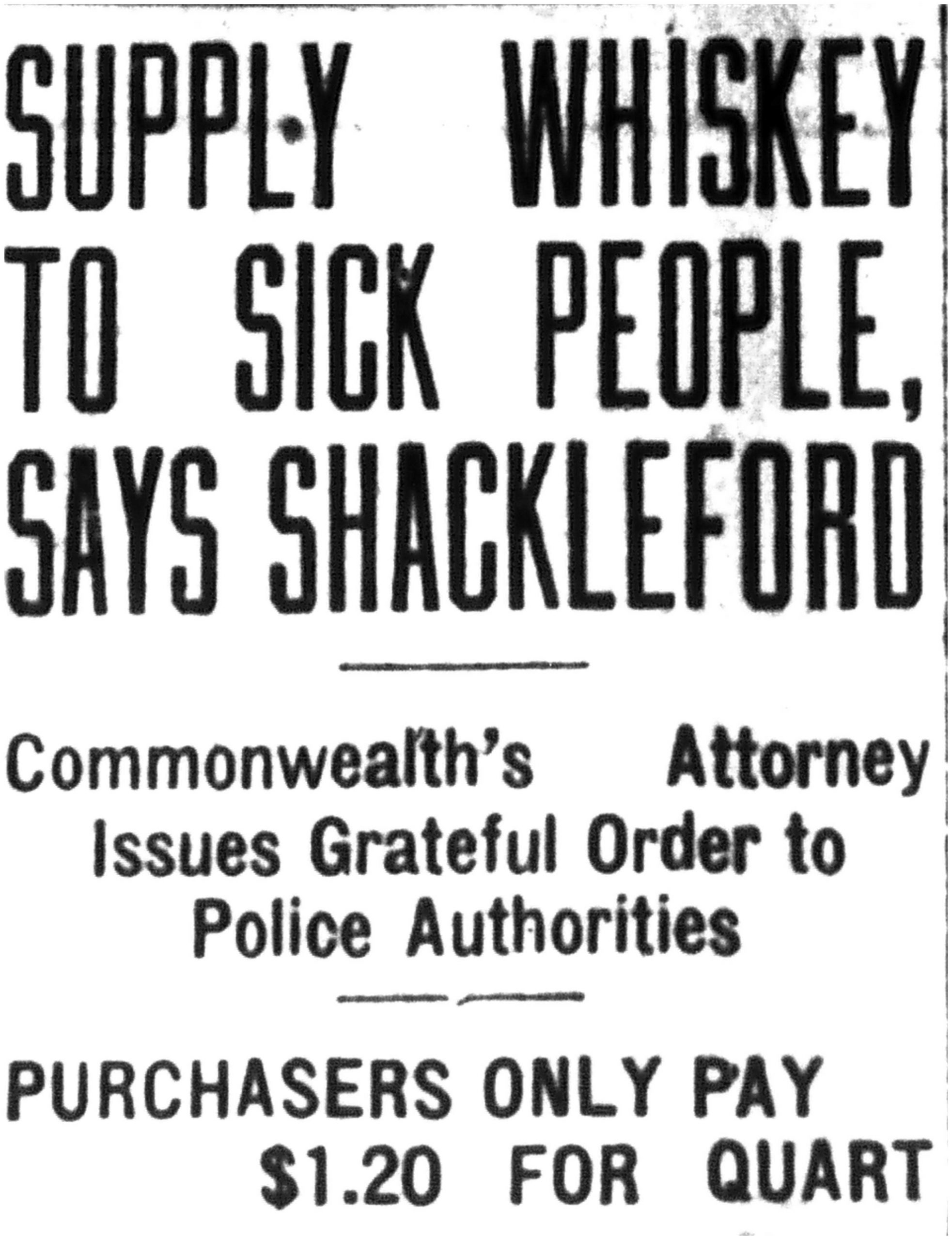 As the calendar turned to October, the roller coaster ride really began. On the first, the Pilot reported encouraging news as the influenza “now seems to be well in hand” in Norfolk as the total number of cases was 300, but with only two deaths. West Point, however, was in a full epidemic as the small town reported 300 cases of its own. Similarly, Portsmouth, Newport News, and Suffolk exploded with cases and looked to close down schools, churches, and theaters. The following day Norfolk joined their ranks with a reported 951 total cases. Further alarming was news that the federal government declined to help quarantine ships coming into port with infections on board. Officials explained that if the government took this action it would be forced to take similar measures at other ports.

Despite recommending that movie theaters be closed and that streetcar travelers use masks, Dr. Schenck continued his optimism, commenting that on 4 October that there were no more than 4,000 cases of the flu in the city, not 18,000 as speculated, and only 17 deaths. Similarly, a Pilot editorial emphasized that there “was no reason for hysteria” and that the flu was “well under control,” a phrase repeated often during the autumn only to be proven wrong within days. The Portsmouth health board announced the following day that the ban on church services and other public gatherings would be extended. A separate news item, however, noted that the city’s high school football team would play its complete schedule.

By 9 October the influenza in Norfolk had climbed to 1,112 cases and 11 more deaths. The following day, however, cases reportedly were down significantly. The Pilot even informed readers that the “the crest of the epidemic is now passed and the disease is now subsiding.”

In the midst of such chaos health commissioner Schenck determined to hold the line on safety measures. Some soda fountains were still using glasses rather than disposable paper cups per his directive. He promised action if they did not fall in line: “I gave them a fair chance . . . but if they want to be closed tighter than a drum I will be happy to accommodate them.” Public spitting was not only a widespread nuisance, but a central method for the flu’s transmission. Norfolk’s city manager banned spitting and instructed police officers “to arrest offenders on the spot.”

Newspapers like the Virginian-Pilot proved instrumental in providing useful information from official quarters, such as the national public health service. But they also rendered dramatic stories of families being wiped out, priests dying from “overwork” caring for the infirmed, hospital physicians suffering physical breakdowns, and even federal investigators debunking accusations that enemy agents brought the flu to America via submarines.

All across Hampton Roads churches, theaters, barber shops, and schools closed for all or much of October. As cases worsened, temporary hospitals were planned, schools were turned into nurseries, and calls for doctors and nurses were announced. Businesses small and large suffered. Proprietor Leroy Whitely “asked forbearance” for suspending ice deliveries and the C&P Telephone Co. appealed to customers to “make only the most urgent” phone calls as there was a shortage of operators. 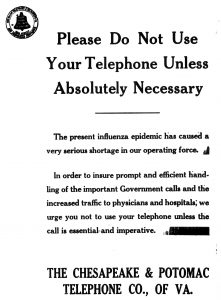 Near the end of October, as reports suggested the epidemic was steadily on the decline, Dr. Schenck met with local physicians to determine the appropriateness of reopening public spaces. On 30 October he lifted the Norfolk ban—just in time for Halloween, as the Pilot noted. The rest of the Hampton Roads area lifted their bans the following week, just ahead of the election. The pandemic’s second wave that began in September 1918 largely withered away by December. Still, residents were warned that another wave of influenza could be coming in the winter of 1919, which is exactly what happened. It would be summer before the influenza pandemic dissipated for good. 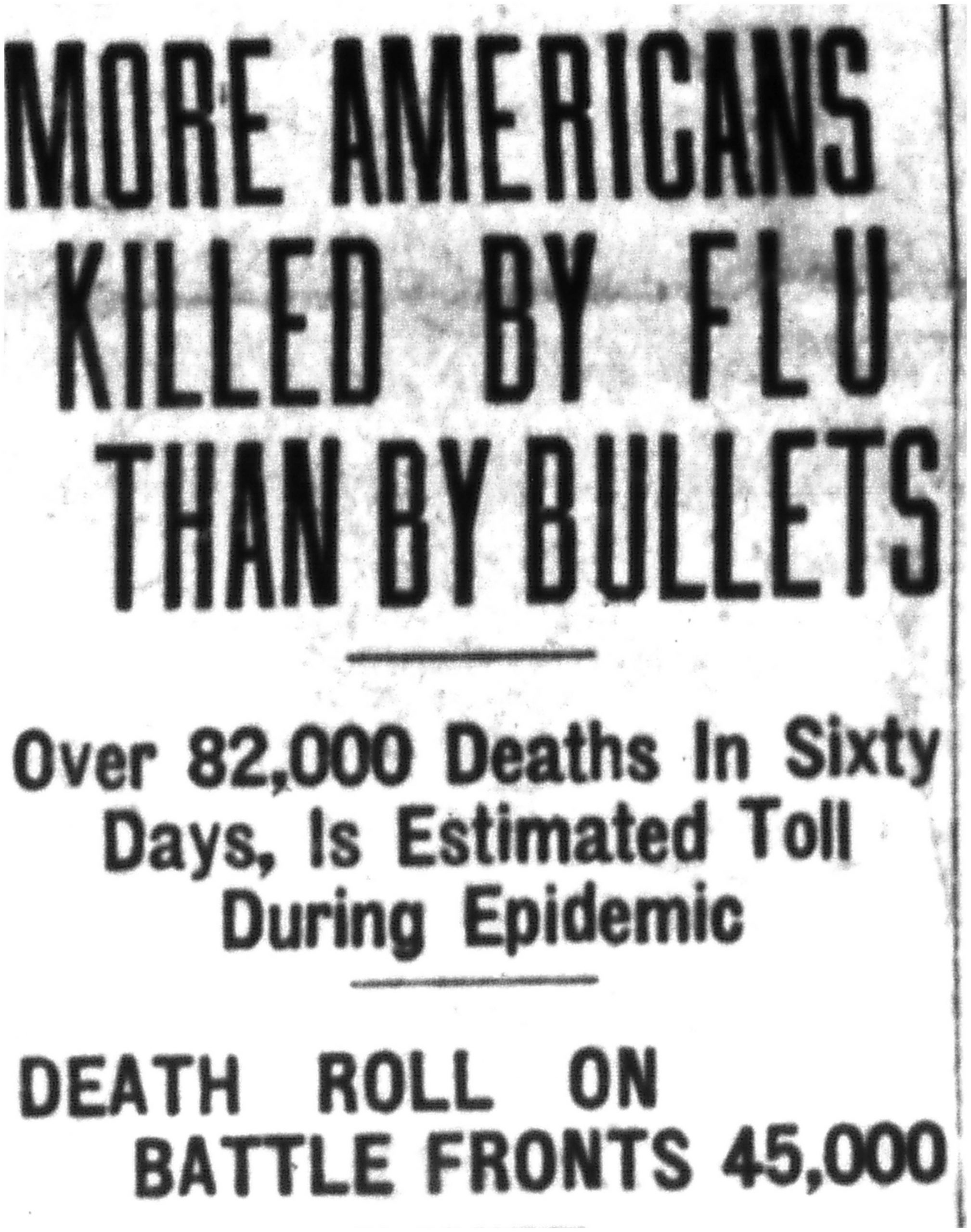 The Pilot‘s headline on 18 November, “More Americans Killed By Flu Than By Bullets,” must have shocked readers as much then as now. With the First World War so recently ended, the census bureau estimated that more Americans had died during the flu’s second wave than perished on the battlefield during the entire war. While the bureau’s exact figures were incorrect, the essence of the story—the singular death toll of the influenza pandemic—was accurate. It is estimated that influenza took 675,000 American lives, including some 57,560 soldiers, while about 50,280 died on the battlefield. Globally, the pandemic claimed 50 million lives, more than double the deaths from fighting in the First World War.

Although we understand much more about the COVID-19 pandemic in our midst than folks a century ago knew about the influenza epidemic, there are striking similarities: the dramatic rise and fall in the number of cases; contradictory and incomplete information; precautionary measures not always adhered to; medical workers struggling to keep up; businesses fighting to survive; and, of course, the tragic loss of life.