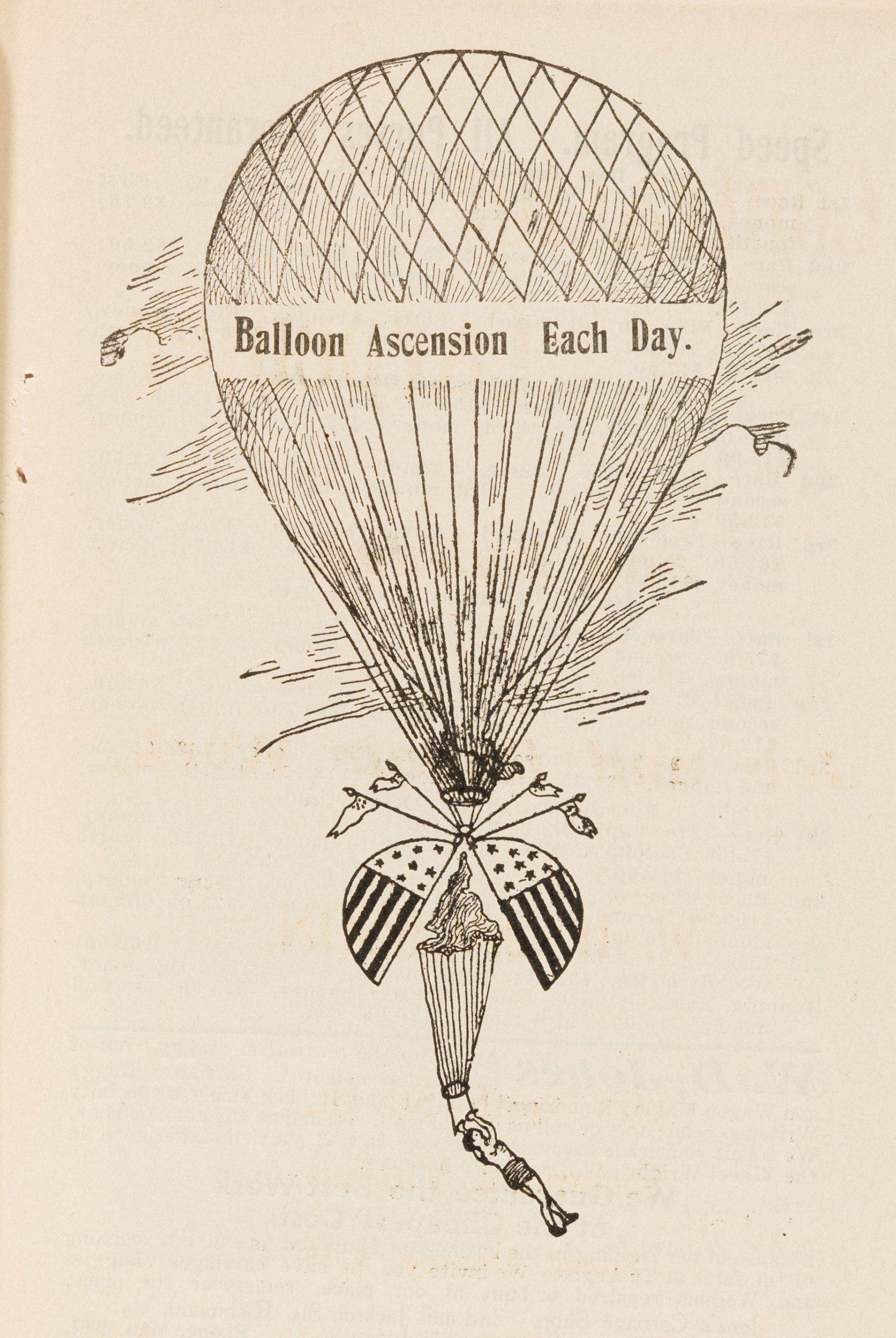 “Attractions and Amusements of Every Kind Will Be the Order of Things”: The History of the Virginia Colored State Fair

In late October 1910, thanks to the efforts of some of Richmond’s most prominent Black leaders, the “Colored State Fair” was held at the Virginia State Fairgrounds. In other southern states, segregated fairs had happened annually for years, and Giles B. Jackson, Richmond attorney and entrepreneur, proposed that Virginia begin its own yearly tradition of a “Colored State Fair.” In the Catalogue and Premium List of The Colored State Fair, sent out to potential visitors prior to the event, an opening statement explained, “The separation of the two races on street cars in cities, on railroads, steamboats and other public carriers throughout the State by the laws of Virginia, and the separation of the races in church and other social gatherings makes it necessary to have a separate State Fair.” 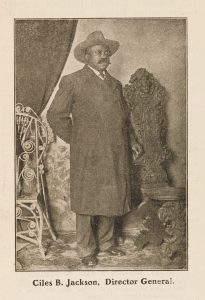 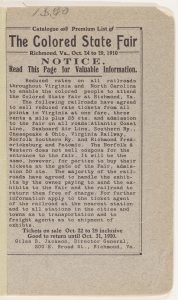 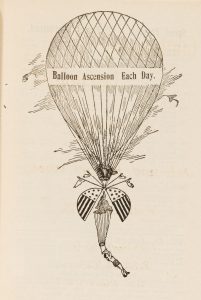 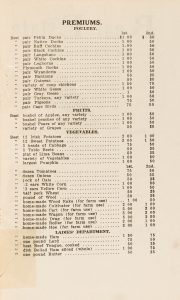 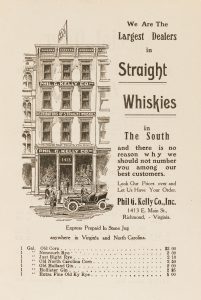 The catalog gave other pertinent information related to the fair as well, including travel and lodging information along with a list of the exhibits “most desired.” Its organizers hoped to attract local livestock, poultry, machinery, dairy and farm products, flowers, manufacturers, arts and “women’s fancy work.” It listed prize money for first and second place in categories like poultry, fruits, vegetables, cakes and pies, pickles, jams and jellies, homemade candies, flower displays, and even hand-painted china, and it provided a list of daily attractions that would be offered at the fair. On 27 October, for example, the day’s schedule included automobile racing, horse racing, and other “attractions of various kinds.”

Three years earlier, Giles B. Jackson had organized the successful “Negro Exhibit” at the 1907 Jamestown Exposition, which displayed inventions and crafts made by African Americans. Some leaders in the Black community were critical that a separate exhibit “only emphasized African Americans’ position in a segregated society.” In Jackson’s opinion, however, separate representation for his race was better than no representation at all. Nearly 750,000 people visited the exhibit from 16 April -1 December 1907, and President Theodore Roosevelt praised it as a great success.

Jackson hoped to relocate the Negro Building and its contents to Richmond to create a permanent museum, but he was unable to secure financial backing for the venture and the building was eventually dismantled.

In the months and weeks leading up to the “Colored State Fair,” many newspapers from around the state publicized it. On 11 August 1910, Roanoke’s Evening News reported that Jackson was visiting Roanoke to deliver a message called “The Past, Present and Future of the Negro Race,” in which he emphasized the importance of the fair and encouraged people to visit.

In July 1910, the Free Lance of Fredericksburg reported that Jackson hoped to have President Roosevelt as a guest at the fair, but in a letter published in the Times-Dispatch on 16 October 1910, Roosevelt wrote that he regretted that his “engagements will not permit it.” Jackson also invited Booker T. Washington, the primary advocate of a “go slow” approach to integration, and boxer Jack Johnson to the fair. However, the Staunton Spectator and Vindicator of 21 October 1910 reported that both men were unable to attend. 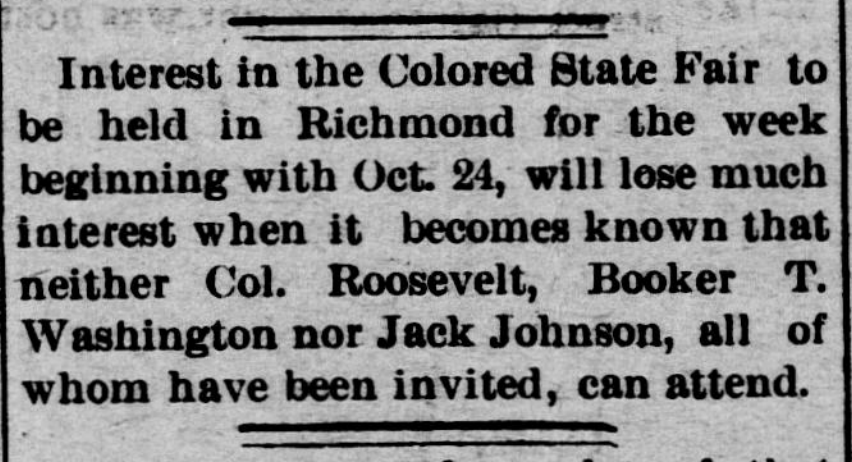 Newspapers as far away as Tazewell and Irvington also reported on the fair. On 20 October 1910, the Tazewell Republican noted that the 24th was selected as “Tazewell Day” with a number of locals expected to attend, and the 26 October issue of Irvington’s Virginia Citizen wrote that the 28th was chosen as “Irvington Day.” Thursday, 27 October was designated as “White Folks’ Day,” and the Times-Dispatch of 22 October reported that speed demon Barney Oldfield and his Benz flyer would appear that day along with balloon ascensions, parachute jumps, a high wire act, football games and horse racing. 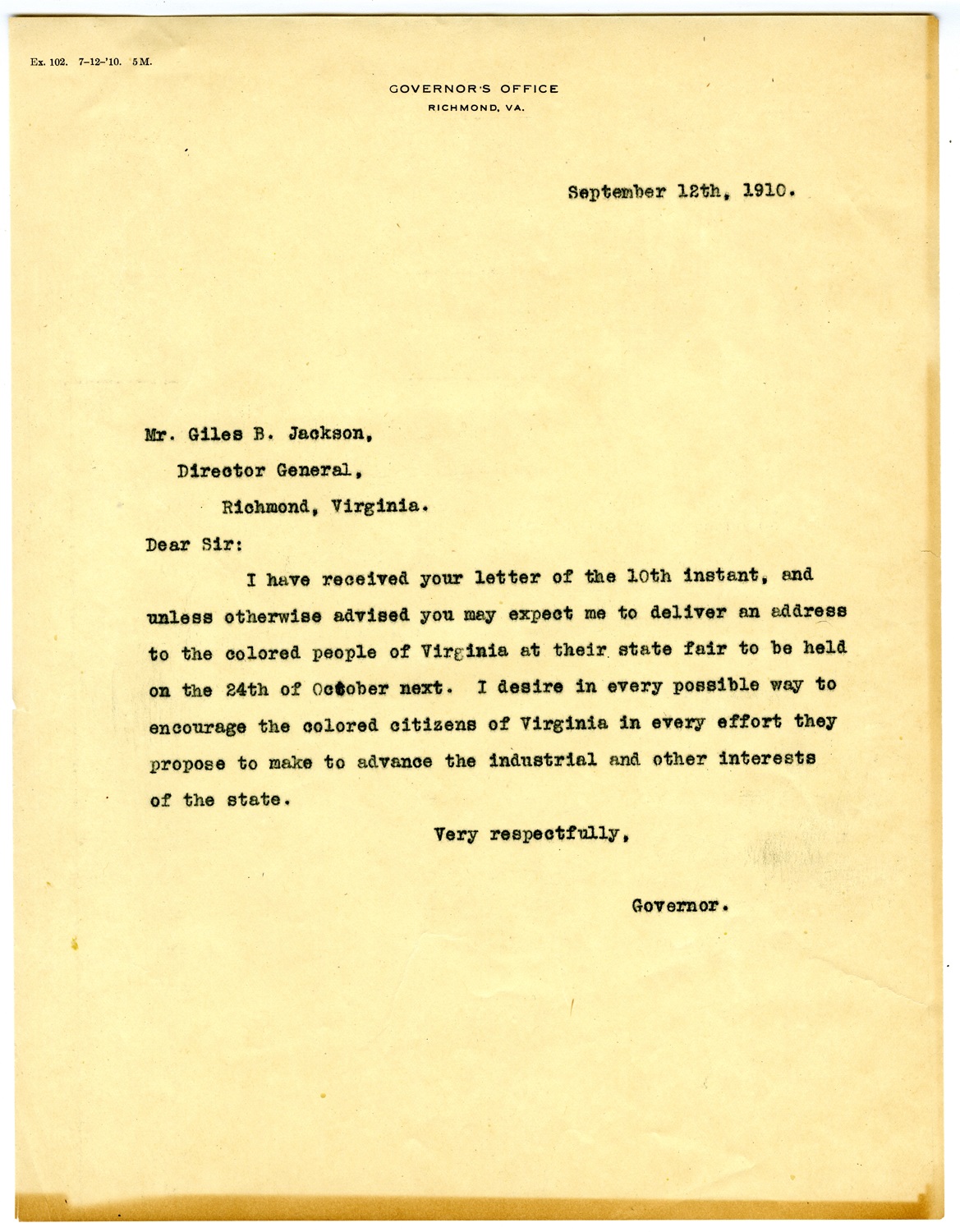 Correspondence Between Giles B. Jackson and Governor Mann. 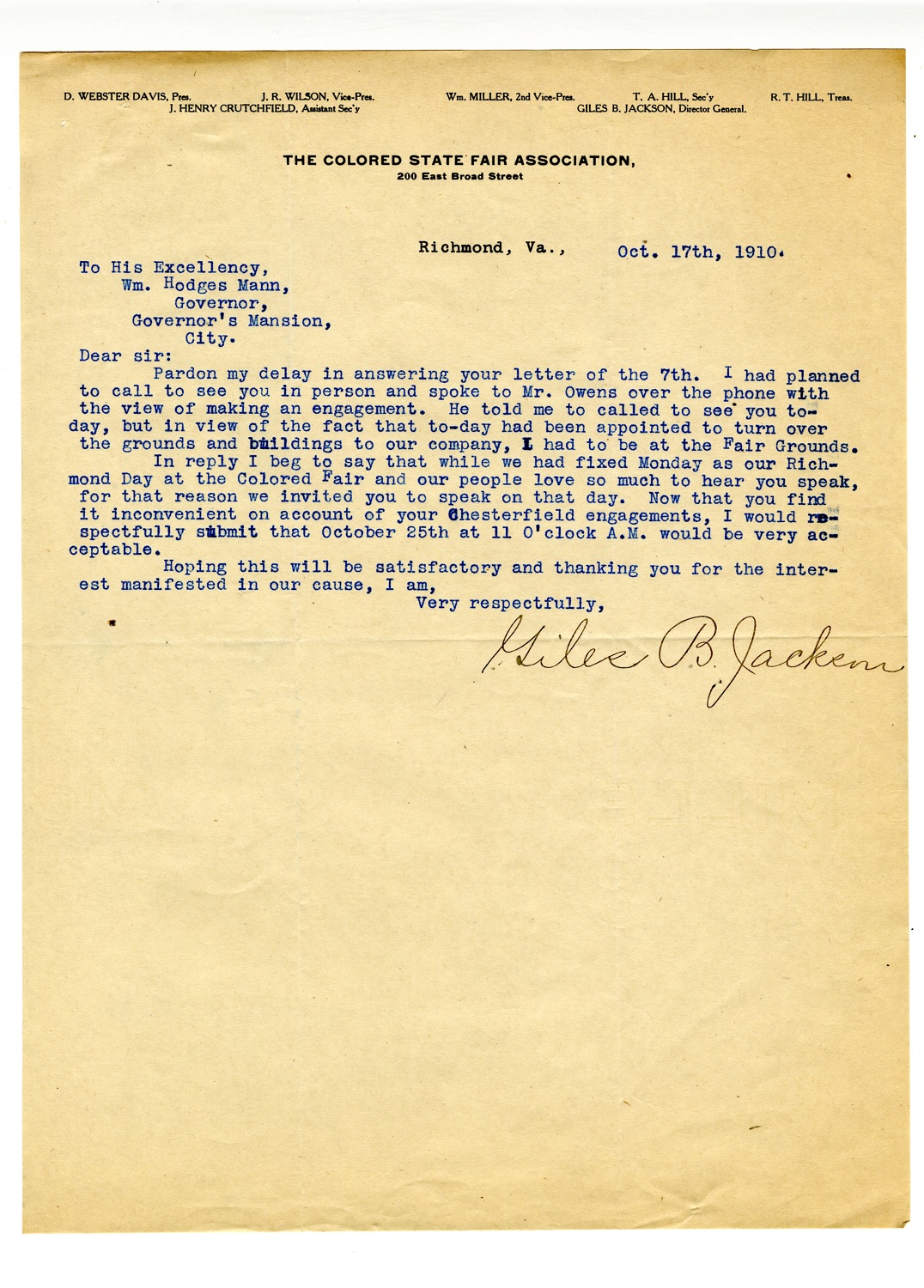 Correspondence Between Giles B. Jackson and Governor Mann

Richmond’s Black newspaper, the Richmond Planet, published very little about the fair in the weeks leading up to it and provided no coverage of the event. The reason may be that the Planet’s editor, another outspoken and prominent figure in Richmond at the time, John Mitchell, Jr., did not agree with Jackson’s philosophy on Black empowerment. Mitchell, like W.E.B. DuBois, held strongly to the belief that segregated events, like the “Colored State Fair,” were detrimental to achieving racial equality. The Planet did publish a reoccurring advertisement providing information for people who wished to have concessions at the fair. “Attractions and amusements of every kind will be the order of things,” it wrote, and those “desiring concessions on the grounds for the feeding of people or amusements. . .will apply to Giles B. Jackson, Director General, 200 East Broad Street.” It also mentioned that people wishing to lodge visitors register their names at the same address, but aside from this, there was little to no mention of it in the Planet.

According to the Alexandria Gazette of 25 October, opening day of the fair was a success. The Gazette and other newspapers estimated that 2,500 people visited the first day of festivities with Governor William Hodges Mann among the attendees.

The Evening News of Roanoke and the Times-Dispatch also gave positive reviews. “The exhibits. . .are well worth seeing,” wrote the 25 October Times-Dispatch, “appetizing bread, cakes, preserves, pickles and other good things of the culinary art are on exhibit… there is also a large display of needlework, raffia work, and carving. The most important exhibit is made by the boys’ branch of the Rock Castle Industrial Institute, consisting of wagons, buggies, harnesses and all paraphernalia of the horse.”

The Times Dispatch article did mention that the fair’s Midway was not complete, but that a Ferris wheel and merry-go-round were operational and popular with visitors.  Apparently, once the fair had gotten underway, Jackson requested permission from Henrico County to have a bar on the fairgrounds, but the Free Lance reported that Judge Scott of Henrico ruled that the “public peace demanded that the license not be granted.” “White Folks’ Day” was reportedly a success as well, with the Times-Dispatch of 28 October headline, “Mighty Fast Time Made by Oldfield.” The racecar driver established a track record in his “Famous Benz” in front of 7,500 spectators and while Oldfield was “unquestionably the magnet which drew the crowd,” three “hotly contested” harness races and live music provided entertainment for visitors as well.

By early accounts, the fair seemed to be a success, but once it was over it was apparent it had not generated the revenue Jackson hoped it would. “The colored state fair in progress last week in Richmond was a frost,” claimed the Free Lance. “The report is that promoters have lost heavily. It is known that several attachments have been sued out against the box office. The cold weather of two days has had the effect of depleting the very small crowds.” The Evening News reported on 22 November 1910 that Giles Jackson had finally “broken the grim silence that has enveloped him since it collapsed and he announces today that though crushed to earth the colored fair will rise again.” 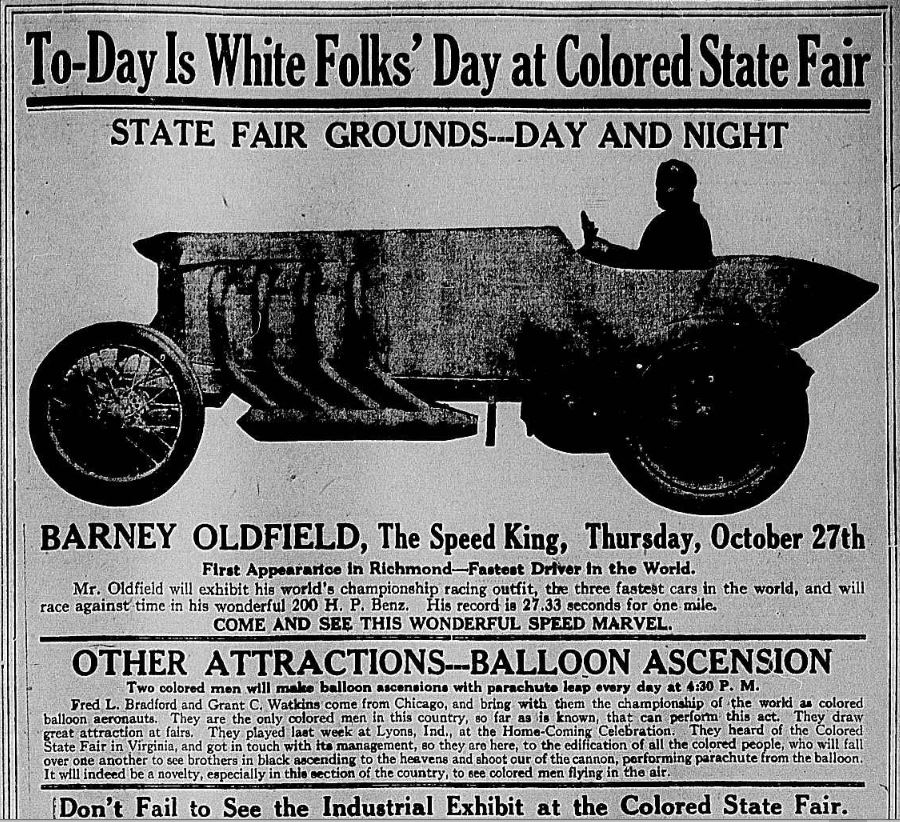 To make matters worse, the bank providing a great deal of financial backing for the fair, the Grand Fountain United Order of the True Reformers, had recently been ordered to close due to a series of financial missteps. The United Order of the True Reformers had an illustrious history, starting as a temperance organization and eventually becoming one of the largest and most successful Black-owned and operated companies in the U.S. from 1889-1897.

Under the leadership of William Washington Browne, its reputation as a reliable financial institution was unparalleled, but after Browne’s death in 1897 its leadership fractured and things slowly deteriorated for the company. In 1910, everything collapsed when it was discovered that R.T. Hill, longtime manager of the True Reformers Bank and treasurer of the “Colored State Fair,” had embezzlement massive sums of money. Even more damaging, the bank had granted large unsecured loans to projects, like the “Negro Exhibit” at the Jamestown Exposition and the fair, which it could not cover. Many individuals and organizations with savings at the bank lost everything. 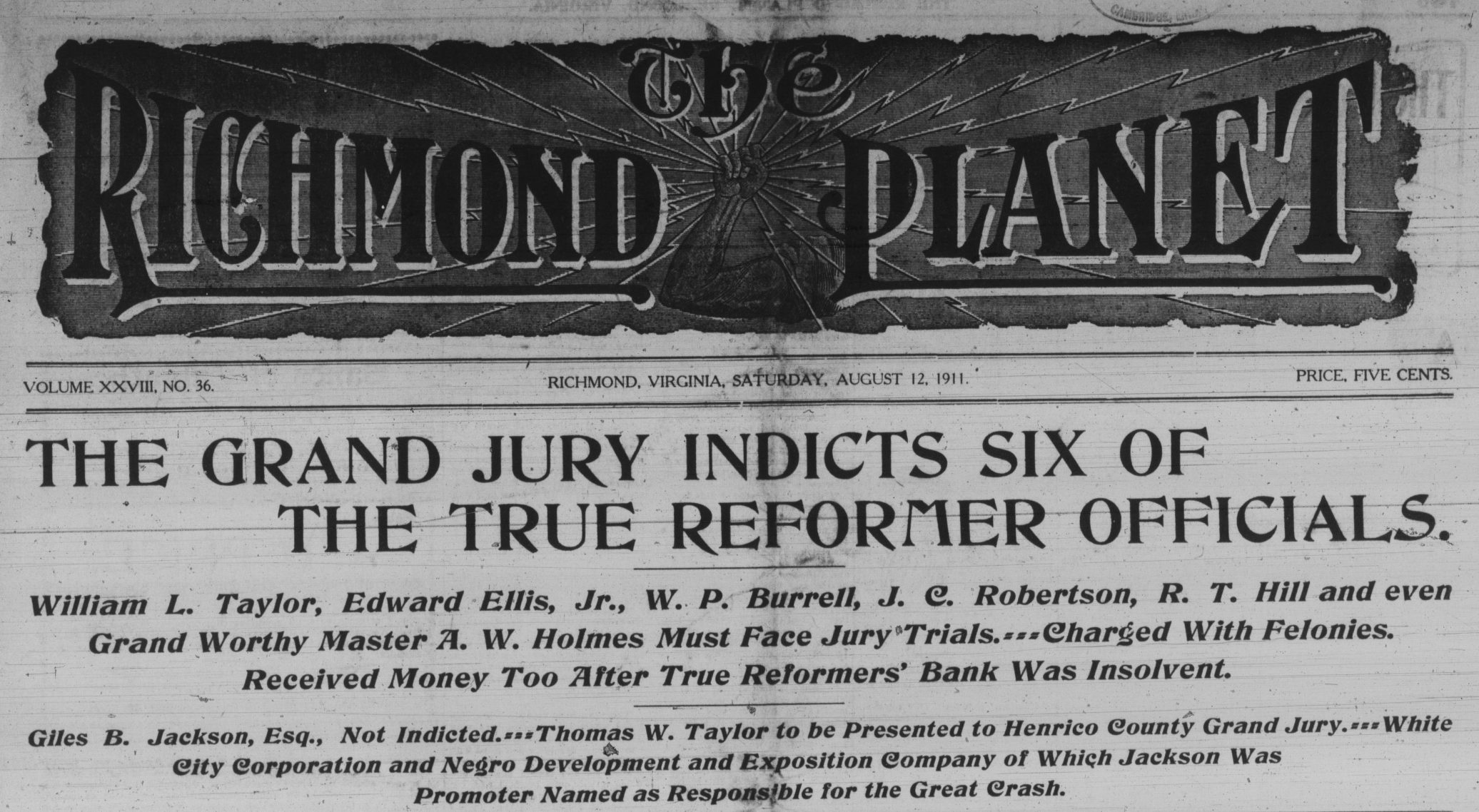 ``The Grand Jury Indicts Six of the True Reformer Officials.``

While Mitchell’s Planet contained almost no coverage on the fair, it published several in-depth articles on the True Reformer scandal because of its devastating impact on Richmond’s Black community. On 12 August 1911, the Planet’s headline read, “The Grand Jury Indicts Six of the True Reformers Officials.” R.T. Hill was one of the names mentioned in the indictment, though he had disappeared months earlier and authorities never discovered his whereabouts.

“We find that an enormous sum of about Two Hundred and Ninety Thousand Dollars has been misappropriated and thereby lost to the shareholders or depositors,” the Planet wrote, “through reckless loans and assistance given the Colored Fair Association, the Colored Department of the Jamestown Exposition, the Reformers’ Newspaper, the Reformers’ Hotel and the Mercantile and Industrial Association and its branches.” Giles B. Jackson was not indicted, but he was forced to defend himself against accusations of mismanagement.

Segregated fairs continued in other counties and cities throughout Virginia for many years beyond 1910, but the fair’s financial losses and the collapse of the True Reformers ended Giles B. Jackson’s hopes for a yearly “Colored State Fair” in Richmond. Through the efforts of groups like the New Farmers of America and “Negro Farm Makers Club,” the State Fair of Virginia (also called the Atlantic Rural Exposition for a period) held some segregated competitions until the passage of the 1964 Civil Rights Act began to force the integration of clubs such as 4-H and F.F.A. (Future Farmers of America).

Though some of his peers disagreed with his promotion of segregated events, it was Giles B. Jackson’s intention to create a platform through which the accomplishments of the Black community could be seen and celebrated.  Jackson went on to have a successful career as chief of the Negro Division of the U.S. Employment Service in Washington, D.C., a position he held until 30 June 1919. He died in 1924, at age seventy, while attending the Republican National Convention in Cleveland, Ohio.