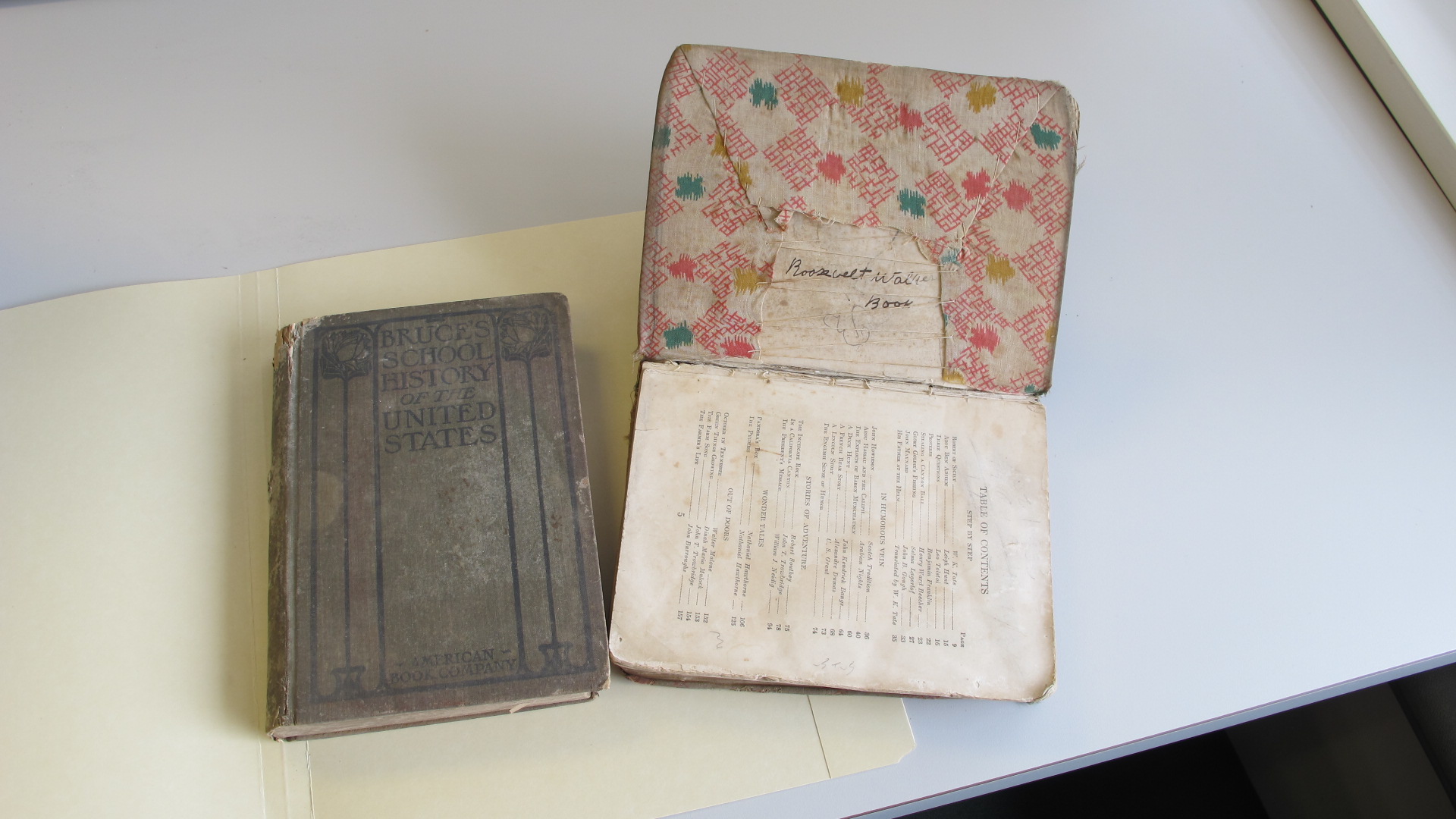 By Trenton HizerNovember 3, 2021No Comments

About 25 years ago, Michael Cook was hiking in rural Mecklenburg County near the North Carolina border, some eight to ten miles southwest of South Hill, when he came across an abandoned two-story building. Entering the building, he discovered some old receipts for the purchase of tobacco, which seemed to confirm what he was later told, that the building was on what had been a tobacco farm. Michael made his way up to the second floor of the building. There he found five child-sized desks with books on them. The roof had long before collapsed and the books that had sat in the exposed area disintegrated when he tried to pick them up. Over in a corner, however, the collapsed ceiling had provided protection to some books sitting on the floor by an overturned desk. He gathered these books and took them with him. Stopping off in the nearest town, Michael asked around and learned that at one time the building had been home to an African American school.

For a quarter of a century Michael held on to these books, then decided that it was time to find a new home for them, one closer to Mecklenburg County than Houston, Texas. So he contacted us at the Library of Virginia and we quickly accepted his generous donation. Not wanting to risk sending the books by mail, Michael flew to Richmond to deliver them personally. His request was that any research done on names written in the books be passed along. 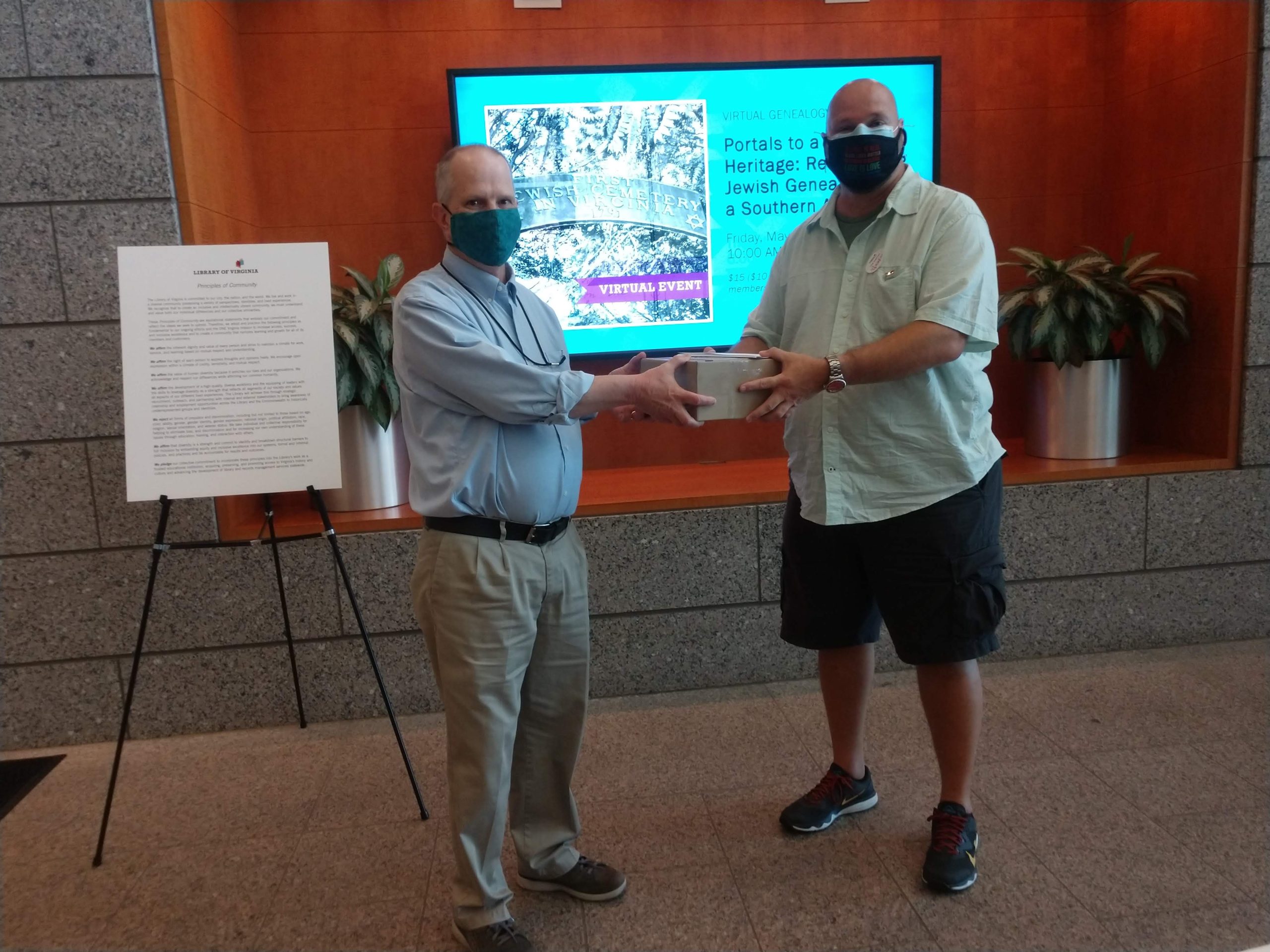 The donor handing over the volumes to the author.

So the task at hand became identifying the people who wrote their names in the textbooks. Three of the books—Merrill’s Speller (published 1897), Bruce’s School History of the United States (1903), and The Mother Tongue (1903) contain inscriptions by Amy Jackson. The Child’s World: Fifth Reader (1917) has the name of Roosevelt Walker on the inside, and a homemade cloth book cover on the outside. The last book, The Child’s World: Third Reader (1917) is missing both covers and contains no writing. So who were Amy Jackson and Roosevelt Walker? 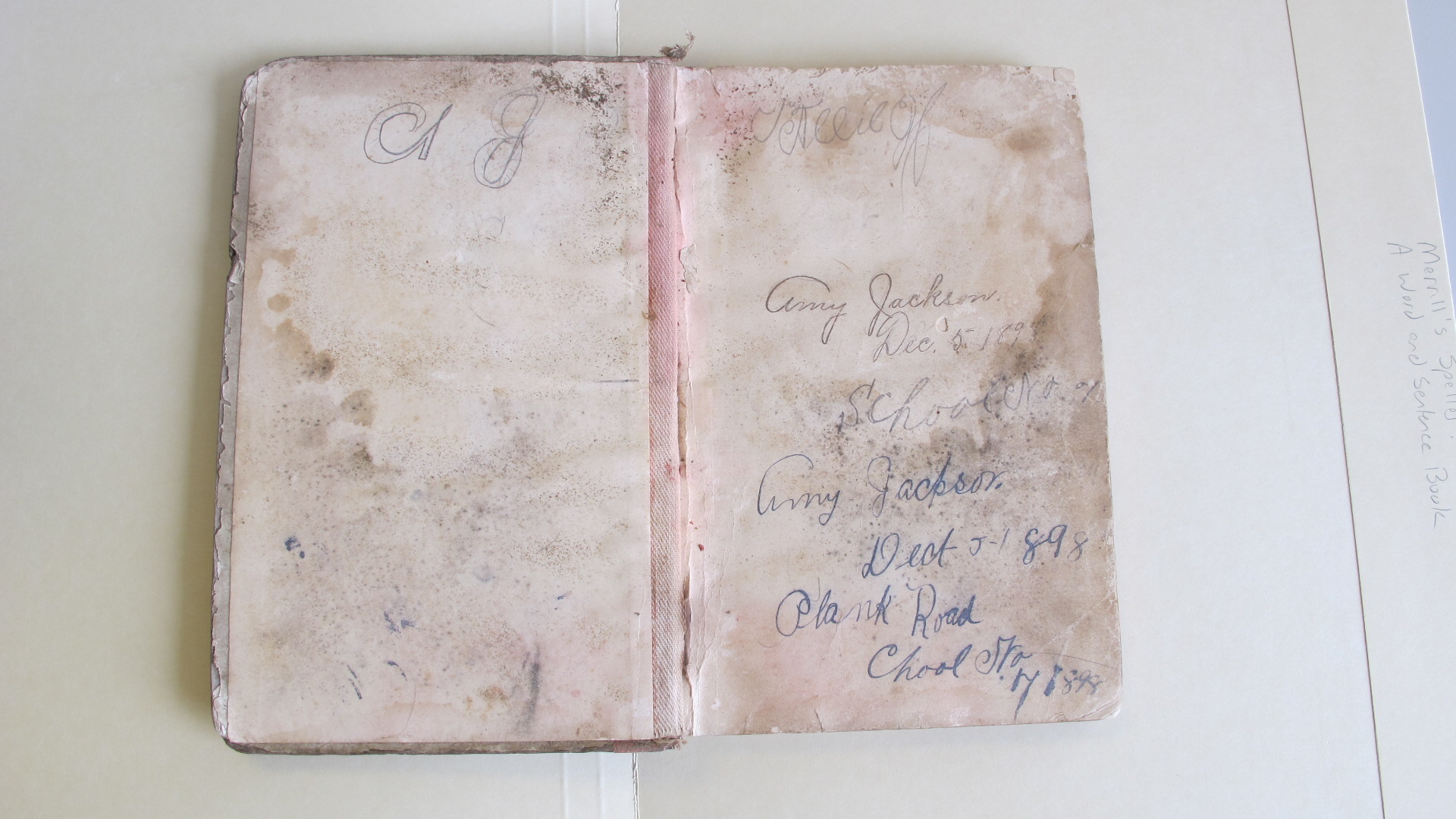 According to census records, Amy Jackson was the daughter of Collins Jackson (b. ca. 1846), an African American farmer, and his wife Laura Bracey Jackson (b. ca. 1848), the youngest of six children who survived to adulthood (out of nine). The 1900 census recorded her birth as June 1889, while her death certificate provides a date of 10 November 1889. The 1900 census did not indicate that Amy Jackson went to school or could read and write, but the 1910 census indicated that she could both read and write.1

Amy married James Walker (18 February 1889-17 November 1983), a farmer and lumberman, on 6 December 1914.2 Their son Roosevelt Walker was born 18 May 1917.3 Some time after 1930, the family moved from the South Hill-La Crosse area of Mecklenburg County up the road to Meredithville in Brunswick County.4 Amy Jackson Walker died 2 November 1959, and was buried in a family plot near La Crosse. When he died almost a quarter century later, James Walker was buried in a family plot in Meredithville.5 Roosevelt Walker worked for W. H. Scott Contracting Company of Franklin before the Second World War began, but at some point after 1940, he may have returned home to work with his father. He died 7 June 2010, at Community Memorial Health Center in South Hill and was buried in Crestview Memorial Park there.6

(Right) This book has a sewn cloth cover on it and is missing its title and publication pages. It was easy to determine that the book is The Child’s World: Fifth Reader, published in Richmond in 1917 by the Johnson Publishing Company. On its inside cover is written the name “Roosevelt Walker.”

So identifying Amy Jackson (Walker) and Roosevelt Walker was easier than answering the next question. Where did the textbooks originate? Both Walkers probably attended the African American public schools in Mecklenburg County. Amy recorded in her books that she attended school no. 7 located on the Plank Road. The Jackson and the Walker families both lived near La Crosse, ten miles or so north of where Michael found the books. One possible explanation is that as spending on education, especially for African Americans, dwindled during the first decades of the 20th century, textbooks and other valuable resources were moved about where needed. Almost 400 Rosenwald Schools, named for Julius Rosenwald (of Sears, Roebuck and Company) who donated money to help build them, were erected in Virginia during the 1920s7, with at least 16 of them in Mecklenburg County.8 African American communities were required to raise matching funds and it may be this included resources other than money. Perhaps these textbooks were moved to where they were needed at a Rosenwald School.

The unidentified man in an accompanying photographic postcard is another unanswered question. The Defender stamp used on the reverse of the card was in use from 1920 to 1945. Perhaps it is Amy Jackson Walker’s husband James? If any of our readers can shed some light on these questions, we’d like to hear from you! 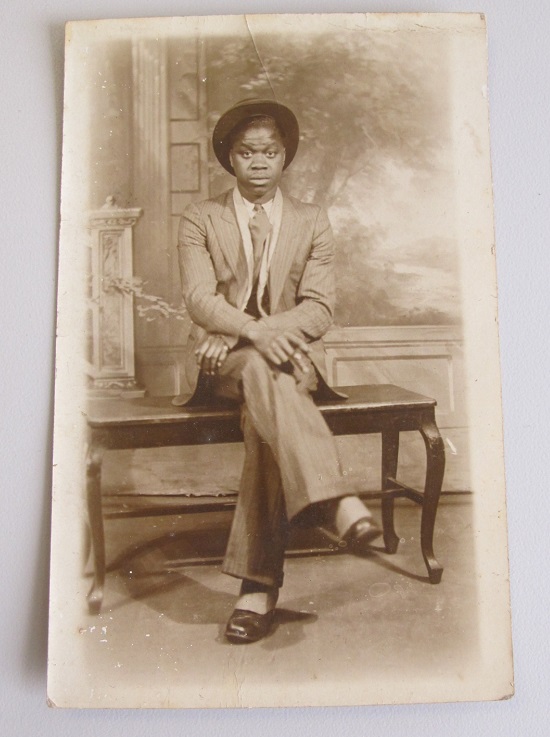 Found in another of the books (titled THE MOTHER TONGUE) was a photograph postcard of an unidentified African American man wearing a striped suit, hat, and spats and smoking a cigar. The Defender stamp on the reverse of the postcard dates it 1920-1945.

The books are filed as the Jackson-Walker Family Textbooks, 1897-1917 (Accession 53307) and are available to researchers at the Library of Virginia.