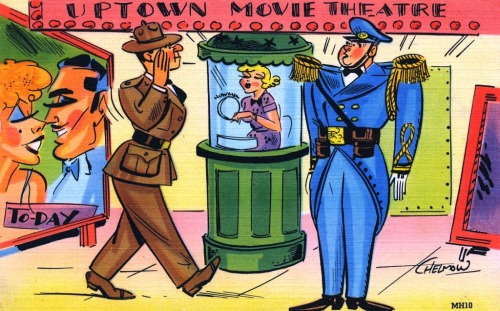 Division of Motion Picture Censorship Records at the Library of Virginia

By Nathan VerillaDecember 6, 2021No Comments

The Division of Motion Picture Censorship existed as a section of the Department of Law (now the Office of the Attorney General) from 1922-1966. Originally called the Virginia State Board of Censors, it was comprised of three members, who were responsible for screening every film, regardless of length, topic, or intended audience, that distributors wanted to have shown in theaters in Virginia.

The files on controversial films provide a deeply telling view on the mores of white Virginia society during the time period the Division of Motion Picture Censorship existed. Several of the works of the renowned filmmaker Oscar Michaux were rejected due to their focus on what the censors saw as “racial” issues. One slim but extremely fitting file is that of the film of the Joe Louis vs. Max Baer boxing match in 1935, which was rejected on the grounds that the film’s exhibition might “incite crime” since Baer, a white boxer, was defeated by Black boxer Joe Louis. Some of the footage is now available on YouTube.

Another film that came under scrutiny both in Virginia and nationally was a 1939 film originally titled Hitler-Beast of Berlin. Based on Goose Step by Shepard Traube, the film followed a liberal German couple and an underground movement against the Nazi party. The Division of Motion Picture Censorship in Virginia granted the film a license only to revoke it a few days later, stating:

The natural reaction from viewing this film is one of violent resentment against Germany…Nothing could be more productive of racial hatred and resentment, and particularly at this time, than an inflammatory and inhuman dramatization of events which purport to be typical of the conduct of the German Government.

The rejection letter continued stating that screening such a film in Virginia would result in “a clash of the races and physical violence and bloodshed, if not undue espionage and even sabotage.” A judge ordered a viewing of the film and despite the Division of Motion Picture Censorship’s agreement that the film could be shown under the name “Goose Step,” by 1942 the United States’ relationship with Germany was quite different and the film was being advertised in Virginia papers under its original title.

The Supreme Court decision Roth v. United States (1957) created a definition of material considered obscene and not protected under the First Amendment, essentially narrowing the content that could be rejected by the board. As the 1960s progressed, the board of censors, consisting of three women between the ages of 60 and 80 who resided in Amherst, Appomattox, and Roanoke, came to be viewed as being overly conservative compared to the contemporary community standards. In January 1966, Governor Albertis S. Harrison addressed the Legislature for the last time during his term and called for the elimination of both the Pupil Placement Board and the Division of Motion Picture Censorship. It was eliminated by the General Assembly later that year. 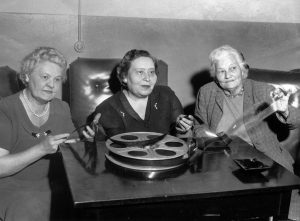 The records of the Division of Motion Picture Censorship (Acc. 26515) contain materials such as applications for licenses to show films in Virginia, agency employee records, records pertaining to theaters and theater inspectors, annual reports, listings of changes to films demanded of the studios necessary for a film to be licensed, otherwise known as elimination records; correspondence, and files on controversial films. The bulk of these records are held at the State Records Center, and need to be requested in advance, but some of the correspondence and the files on controversial films are kept at the main location of The Library of Virginia in downtown Richmond.

Films and TelevisionSports and Outdoor Activities