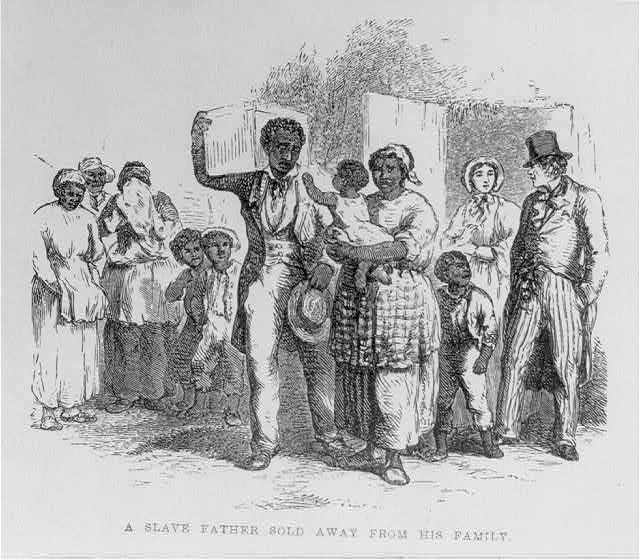 The Freedom to Love

On her deathbed in 1848, Susan Mills called her brother Henry and her sister Nancy to her bedside. She told them that she wanted her husband, Thomas Jefferson, to be emancipated from slavery. Susan was his wife and his legal enslaver.

In the month of February, we recognize Black history. Many Americans also associate the month with Valentine’s Day, a celebration of love: romantic, familial, and friendship. We think it’s important that our monthly blog posts highlighting narratives from Virginia Untold, the Library of Virginia project that facilitates digital access to collections documenting Black history, document not only struggle and trauma, but also resilience and hope.

In between these layers, we can often find incredible acts of love demonstrated between free and enslaved people fighting for their own. In today’s blog post, I want to bring your attention to a few stories of couples that I have discovered as a result of processing records from the City of Richmond Hustings Court.

Thomas Jefferson submitted a petition to the court asking that the wishes of his wife, Susan Mills, be honored. The court approved and established the will presumably allowing Jefferson to now act as a free man. But the remainder of the story is a mystery. What became of her children: William, Thomas, David, and Mary? The four children carried Susan’s surname: Mills. We don’t know for sure if they were also Jefferson’s children. Micajah Bates, whom Susan wished to appoint as her children’s guardian, held a number of prominent positions in Richmond City, including city surveyor, and served as a trustee for individuals involved in legal disputes.1 Bates was issued guardianship temporarily, but once the court established Jefferson’s freedom, I’d like to hope he was allowed to care for them. 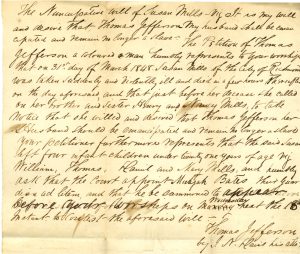 Thomas Jefferson submitted a copy of his wife’s will to prove that she did in fact desire him to be emancipated upon her death. The court “proved and established” the will on April 19, 1848.

While these scenarios may seem surprising to some, there are documented cases of free Black and multiracial spouses receiving or purchasing husbands, wives, children, and other family members as a way of preventing sale and destruction of their families. Freeing a family member cost money and also ran the risk of the emancipated family member being forced to leave the Commonwealth. Under the dehumanizing laws of chattel slavery, enslaved people were considered property. They could not legally marry. However, many enslaved people entered into non-sanctioned marriages that were neither recognized legally nor protected from enslavers who separated spouses at will. Some spouses who had been emancipated even petitioned the courts to be re-enslaved in order to remain close to loved ones and preserve relationships, like in the case of Judith Cullins Brooks.2

An affidavit filed with Oliver’s petition explains that Oliver’s previous enslaver had “been so pleased by his faithfulness to him” that he bequeathed Oliver to his wife Maria Cooper, a free woman. All parties likely recognized the security resulting from this arrangement.


Petitioners like James Oliver submitted affidavits, or
witness statements, testifying to their good character
with their application to remain in the commonwealth.

Although we don’t know when Cooper came to legally own her husband, we do know that she emancipated him on October 22, 1849. The deed reads:

“…in consideration of the love and affection which I bear my said husband, emancipated and set free, and I so hereby emancipate and set free the said James Oliver…”

Previously, Oliver had worked in hotels and dry goods stores as a purchaser. J. H. Eustine stated in his affidavit that he had not known a more “modest, respectable, and worthy man.” Oliver’s petition to remain in the Commonwealth was granted by the court on April 9, 1850. We can only imagine the emotions shared between the couple upon learning they had cleared, if only temporarily, one of many legal challenges to remaining together as husband and wife.

Other couples were not as successful.

At some point in late 1852 or early 1853, a woman named Sophia Maxwell applied to the Richmond Hustings court to be registered as a free person in the city. She had registered as a free person under her maiden name, Sophia Lagerburg, in her former place of residence, New Kent County. Patrick Maxwell, her husband, was also a free person. He was registered as such in the Richmond Hustings court in February 1852. Maxwell, however, had been a resident in Richmond for many years. He was a plasterer by trade. He also owned a confectionary shop in which he and his wife both worked. The couple were married in May 1850 in St. John’s Church by the Rev. H S. Keppler and issued a license by the court clerk in Henrico County. Despite all of these legitimizing details, the Hustings Court denied Sophia Maxwell’s application to be registered. She filed a bill of exception in a last chance effort to obtain legal permission to remain in the same city as her husband. She collected signatures of witnesses on her bill hoping to bolster her chances. The documentary record essentially ends here; we don’t know what happened to Patrick and Sophia after the court’s ruling. 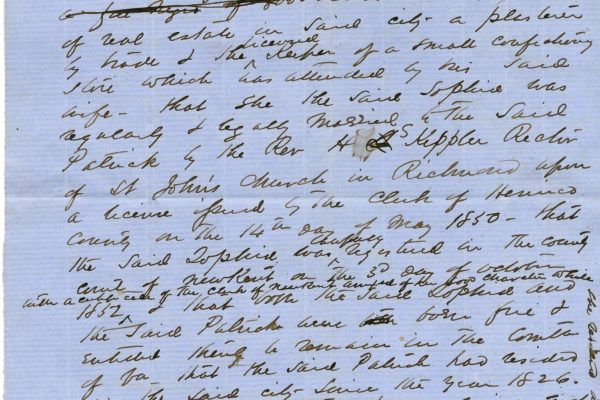 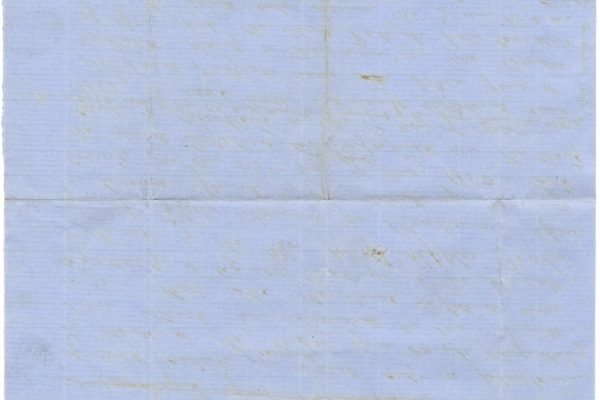 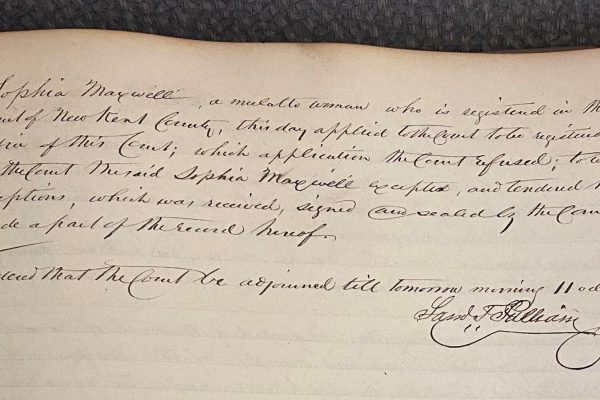 Much like the case of Sophia Maxwell, Betsy Meekins likely thought that proving her legal marriage to husband William King would help her chances of being registered in the city of Richmond. Meekins had been living in the city when she married King, approximately two years prior. King was also a Richmond City resident. They received a marriage license from the Richmond City Hustings Court. Her documents claim she had been living in the city for fifteen years. When she applied to the court for a register, she wasn’t just fighting for herself. Meekins was also fighting for her two sons: John Meekins, thirteen, and George Meekins, eleven.


Meekins filed a three page bill of exception after the court refused her registration application. It was signed by her white counsel, J. H. Gilmer.

When the court denied Meekins’ application to be registered, they also denied registration to her boys. Like Maxwell, Meekins fought back. She procured testimonies from white individuals declaring her husband’s character traits: industrious, honest, sober, and well-behaved. But again, the story dead ends. We don’t know what happened to William King, Betsy Meekins, or John and George.

The cases of Patrick and Sophia Maxwell and William King and Betsy Meekins represent a fraction of the total number of couples split apart due to legal rulings of white justices. They are cases of “registrations refused.” In the late 1850s, Virginia began cracking down on registering free Black and multiracial people in the state. “Registrations refused” are a result of that crackdown. The records are beginning to form a new record type that will eventually be added Virginia Untold.

When the legal route failed them, free Black and enslaved people opted for different measures. Our last story is about Cora Ann Elizabeth Carter (referred to in many documents as C. A. E. Carter) and her husband William Watt Hubbard. In October 1842, Carter and Hubbard attempted to board the steamboat Patrick Henry. When the captain asked for their free papers, Carter produced hers and then showed the promissory note documenting that she had paid $750 for her husband’s freedom. The captain of the boat became suspicious when he noticed an error in the dates on the paper. Carter tried to explain the mistake as a clerical error, but the captain was not satisfied. Carter confessed. The note was a forgery. She had not actually purchased her husband. He was still enslaved to a man named Richard Stoakes. 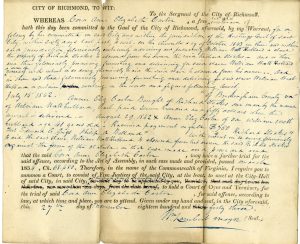 The indictment for Carter’s case includes a copy of the note that was forged for her husband. The presentment on the backside reveals that she was sentenced to “5 years imprisonment in penitentiary.”

Carter was in fact a free woman, but her husband was not. There is much to unpack in this story. I hope that one day Carter and Hubbard will be the focus of an entire post. For now, I will leave you with the grim reality faced by many other couples: separation. Carter was sentenced to five years in the penitentiary. In the best case, Hubbard would’ve returned to his enslaver. In the worst case, he was sold or transported out of the state. It is unclear if Carter and Hubbard were ever reunited during their time on earth.

The court documents referenced in this post are from the Richmond (City) Ended Causes, 1840-1860. These records are currently closed for processing, scanning, indexing, and transcription, a project made possible through a National Historical Publications and Records Commission (NHPRC) grant. NHPRC provides advice and recommendations for the National Archives grants program. An announcement will be made when these records are added to the publicly-accessible digital Virginia Untold project.

“A slave father sold away from this children.” Published in The Child’s Antislavery Book…New York. 1860. Wood engraving. Library of Congress. https://www.loc.gov/pictures/item/2002698281/

This blog post has been edited to omit the sentence saying that Micajah Bates was an enslaver. The newspaper article (“Violent Assault,” Daily Dispatch, 12 January 1855) that was originally used to determine this identity was not placed in the context of what we have subsequently have learned about Bates and his life. We decided that giving him the title of enslaver was misleading without the ability to more fully flesh out the details of his life which is not the focus of this blog post.