Random Reference: “Advice to the Lovelorn”

We are living in an age of peak advice, a crowded media landscape in which bloggers, columnists, podcasters, and online strangers field inquiries about everything from workplace etiquette to marital strife. Advice columns resonate in an era when many of us feel that our professional and personal lives ought to come with an instruction manual.

As an advice aficionado, I was tickled to learn that the progenitor of the 20th-century American advice column identified as a Virginian. Marie Manning (later Gasch) was born in Washington, D.C., but it was her down-home roots in Fairfax County, Virginia, that were touted in her very first “Advice to the Lovelorn” column, published under the pen name of Beatrice Fairfax in 1898.

Miss Fairfax is a Virginian. She is a woman of experience. She has read and observed widely. She is young enough to sympathize with love’s young dream. She will answer, to the best of her ability, all letters on subjects pertaining to the affections.

Manning was a young reporter and columnist for the New York Evening Journal when she was assigned to answer personal letters for a new type of column. Before long, “Advice to the Lovelorn” was syndicated across the country, becoming a national touchstone and even the basis for a 1916 film serial that followed Beatrice Fairfax’s fictional exploits as a “columnist turned crimefighter.”

In her columns, Manning tackles familiar questions of infidelity, jealousy, protective parents, difficult in-laws, and the heartaches of romance. Yet these letters also reflect an America that was changing, with young people—particularly women—embracing new personal freedoms. Manning’s columns also provide evidence of an increasingly diverse and urbanized country, with relationship conflicts stemming from differences in nationality, language, and religion.

Manning’s Beatrice Fairfax persona is empathetic and relatively progressive on issues of gender and marriage, but bygone social and legal norms constrain the advice she gives. Modern advice columnists are quick to suggest couples counseling or a visit to the divorce lawyer as an answer to intransigent marital problems, but in a United States without no-fault divorce or anti-discrimination laws, Beatrice Fairfax almost always counseled married letter writers to learn to live with their spouses, for better or for worse.

Included here are a few of my favorite Beatrice Fairfax columns as they appeared in the 1940 Suffolk-News Herald. It’s still fun to read these letters and imagine the advice we might give if we were given the mantle of Miss Fairfax for the day.

``Jealousy Causes Her to Dye Her Husband's Spring Suit`` 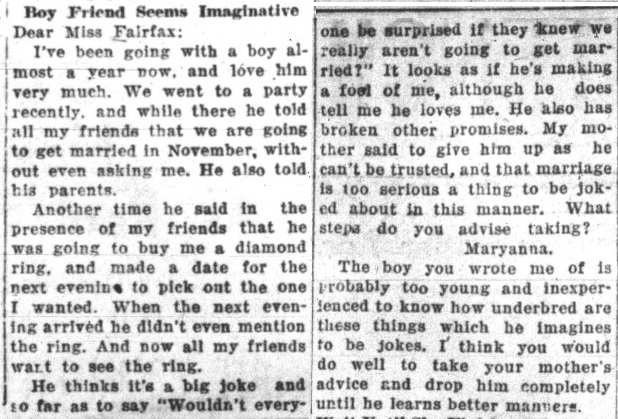