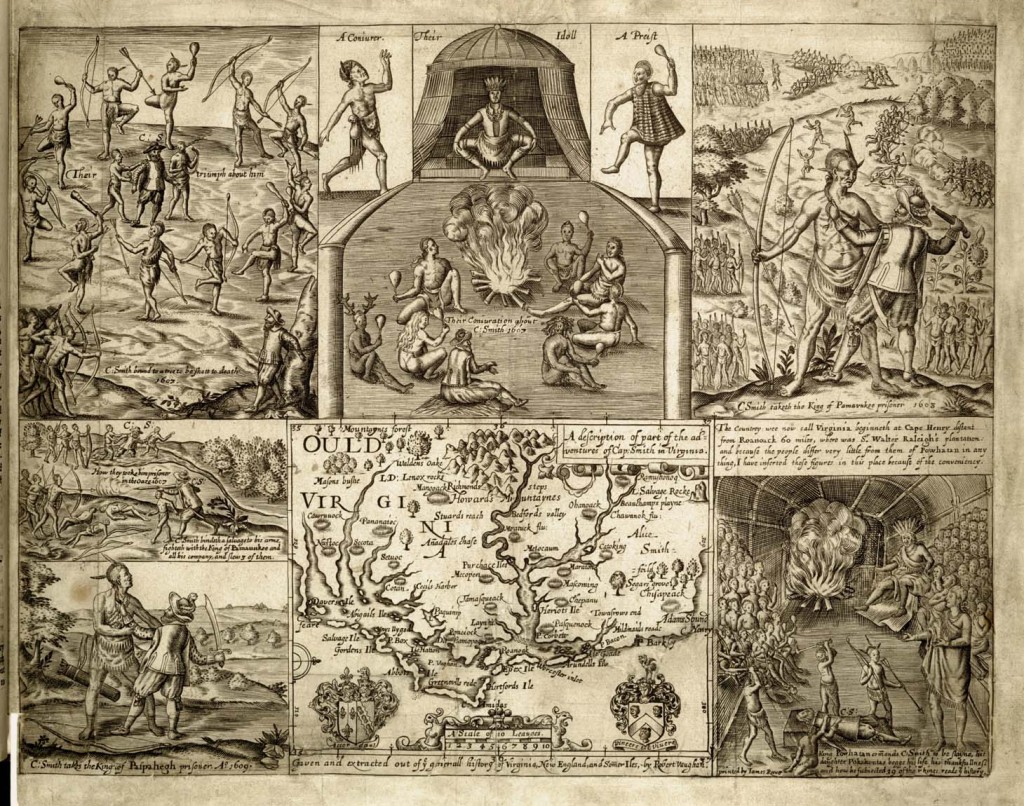 In A Brave and Cunning Prince, James Horn questions accepted narratives regarding 17th-century Virginia as he traces the life of Opechancanough, the brother of Chief Powhatan. According to Horn, Opechananough is the same individual who was known earlier in life as Paquiquineo or by the Spanish name, Don Luis. Spanish sailors traveling through the Chesapeake Bay kidnapped Paquiquineo, who spent the next ten years living in Spain and New Mexico. His travels introduced him to the Atlantic World and to continental America, where he learned firsthand the Spanish colonial practices and their treatment of America’s peoples.

The practice of renaming is often used to show a rebirth or a change in focus or direction and is common across many cultures. It is possible that Paquiquineo and Opechancanough are the same individual, as other Powhatan leaders adopted new names when they acquired new leadership roles. At other times though, Europeans forced new names on indigenous peoples as part of a process of colonization, erasing the cultural importance of their given names. Horn points out that Powhatan’s daughter was introduced to Europe as Rebecca, and we know her by a nickname, Pocahontas, rather than as the name she made sure appeared on her portrait, Matoaka. Similarly, in an effort to claim the physical landscape as well, Europeans also changed the names of geographical features. 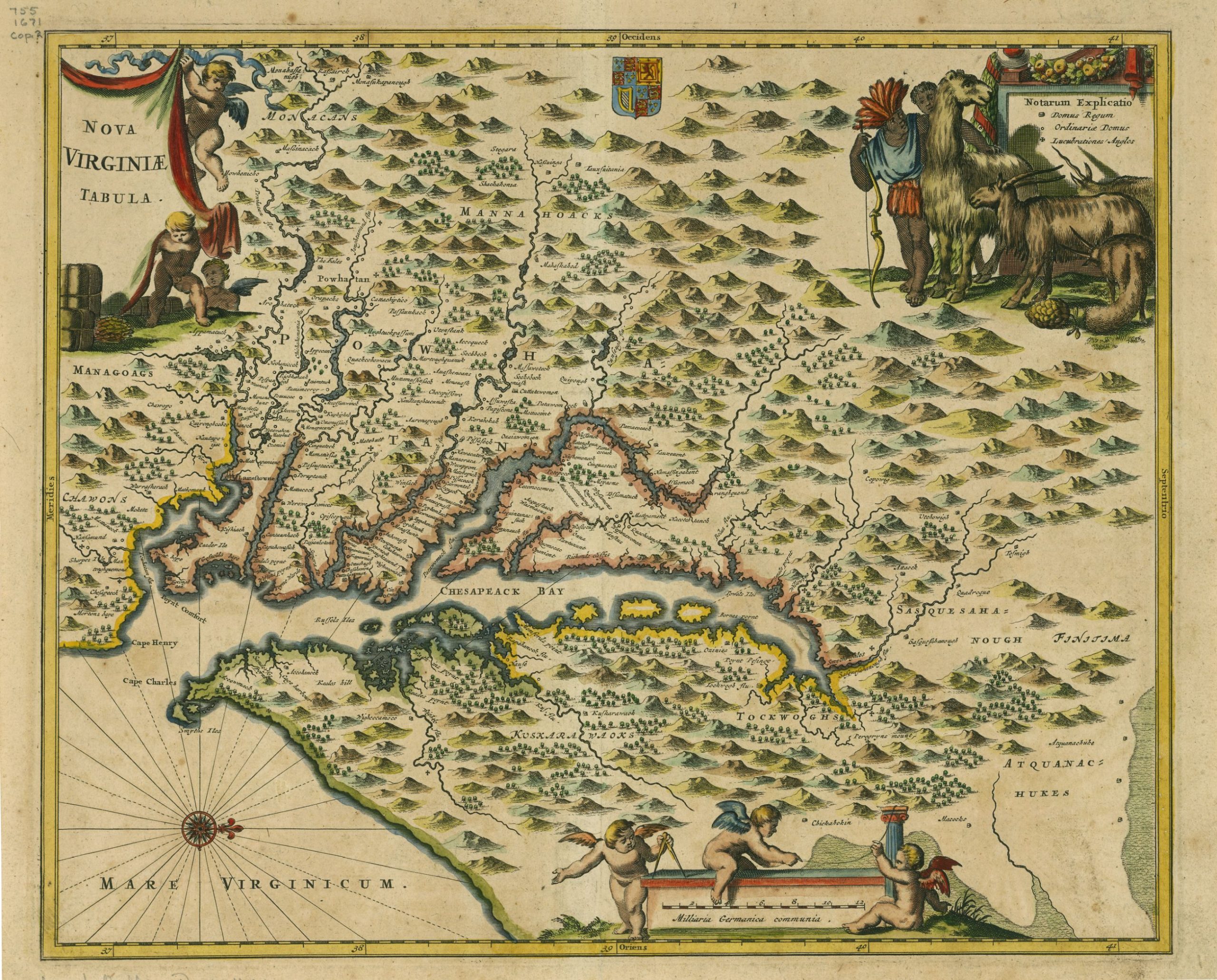 Nova Virginiae tabula, created in 1671 by Arnoldus Montanus, based on information from John Smith.

Today’s place-names reflect Virginia’s 400-year history and Horn builds in explanations of English interpretations of the Algonquian language, and/or misinterpretations of English translations and understanding of customs, practices and verbal exchanges. For example, he analyzes William Strachey’s recording of Indian words sung in triumph after a skirmish and the meanings of Powhatan and Pocahontas’s actions when they were communicating with captive Captain John Smith. The maps within A Brave and Cunning Prince incorporate Indigenous names and the text is sprinkled with Algonquian terms. It is a reminder that Indigenous names peppered the Virginia landscape long before the English arrived and recorded their English names and their translations for geographic features in the Powhatan Confederacy.

Geographic names have been documented and standardized in the United States since 1890, when President Benjamin Harrison established the United States Board on Geographic Names (USBGN). Its authority was further extended by President Theodore Roosevelt in 1906 and it was established in its present form by an act of Congress in 1947. Since the 1950s the Virginia Board on Geographic Names (VABGN) has acted as an advisory board on naming issues in Virginia to the USBGN. Initially, correspondence was between the USBGN and the Virginia State Librarian; in the 1960s the Virginia State Archivist was fully engaged as the point of contact for Virginia feature place-names. Today, the State Archivist works closely with the Senior Map Archivist on new name and name change proposals. 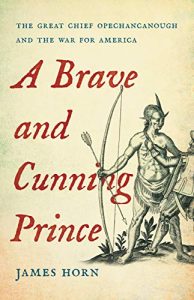 Join us virtually on Tuesday, April 19, at 6 p.m. to discuss A Brave and Cunning Prince with author James Horn.

Registration is free, but required.

A Guide to the Colonial Papers, 1630–1778
Jamestown and Seventeenth-Century Virginia
Resources on Virginia Indians at the Library of Virginia
Virginia Colonial Records Project

The Pamunkey Tradition: Documenting the Past. Virginia: The Museum, 1990.

The Generall Historie of Virginia, New-England, and the Summer Isles, by John Smith. 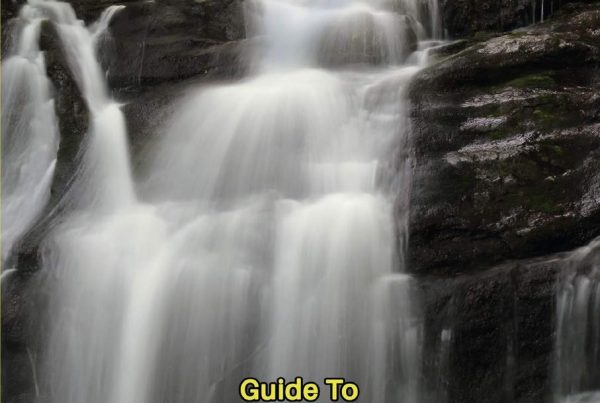