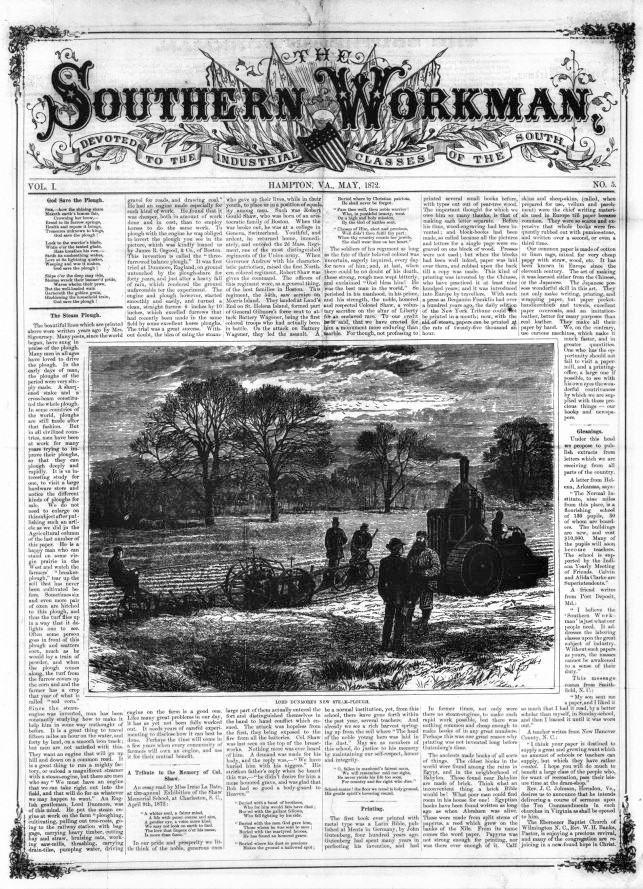 Devoted to the Industrial Classes of the South: The Southern Workman on Virginia Chronicle

Along with a list of many new newspapers, a nearly complete run of the Southern Workman, a monthly published from 1872-1939 by the Hampton Normal and Agricultural Institute, has been digitized and is now available on Virginia Chronicle, the Library of Virginia’s digital newspaper database. With the motto “Devoted to the Industrial Classes of the South,” the sixty-seven-year span of the Southern Workman offers a rich and detailed account of life and learning at the Hampton Institute, now Hampton University, a trade and normal school established for freed people in 1868.

In its inaugural issue, printed January 1872, the Southern Workman kicked off with a hearty greeting and message of unity to its readers: “Fellow workmen, everywhere, give us today the right hand of fellowship, for we must fight shoulder to shoulder, with no gaps in the ranks. In our daily living, in our churches, in our politics, we must work together…and in unity of spirit must face the difficulties before us.”

General Samuel Chapman Armstrong, the Hawaiian-born son of missionaries, was not only the founder and first president of Hampton Institute, but he also served as the managing editor of the Southern Workman until his death in 1893. The managing editors that followed throughout the years included a long list of notable academics, from James Edgar Gregg, a minister and graduate of Harvard University and Yale Divinity School, to Bessie L. Drew, an instructor of music and employee of the Hampton Institute for twenty-nine years. The final issue of the Workman, published July 1939, included “An Editorial Adieu,” written by its last editor, Isaac Fisher. Previously the editor of the Negro Farmer at Tuskegee Institute and the Fisk University News at Fisk University, Fisher brought a wealth of experience to his position as managing editor of the Workman.

Initially formatted as a four-page newspaper, the Southern Workman’s early content typically included agricultural news, news about local public schools and church happenings, and household advice and poetry, while also providing “a forum for the discussion of race problems.” By its later years, the Workman had evolved into an academic journal with lectures, articles, book reviews, and in-depth essays on African American and American Indian history, culture, and education. A constant throughout the Workman’s distribution was its emphasis on the students and faculty of the Hampton Institute. Biographical sketches of professors, lists of new students, records of graduation proceedings, updates on recent graduates, and profiles of successful alumni were regular content throughout its sixty-seven years of publication.

Various front pages and tables of contents from the SOUTHERN WORKMAN 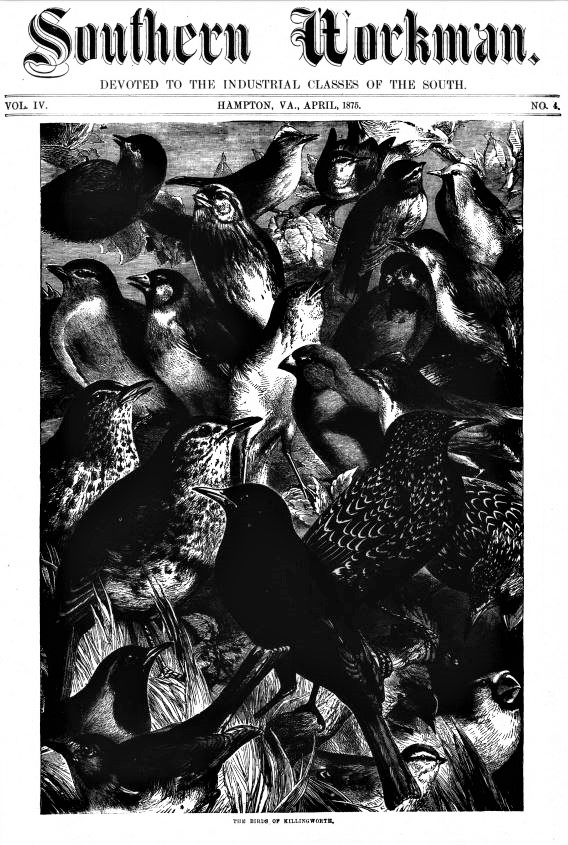 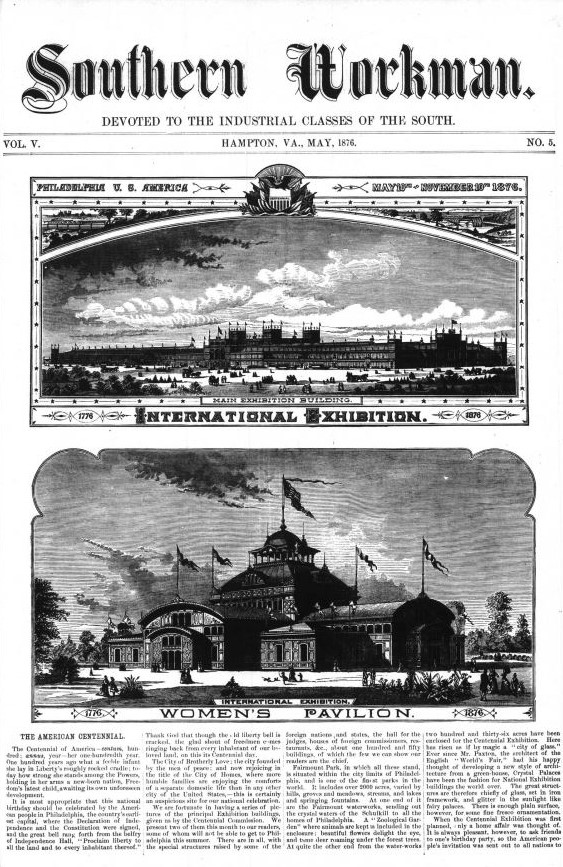 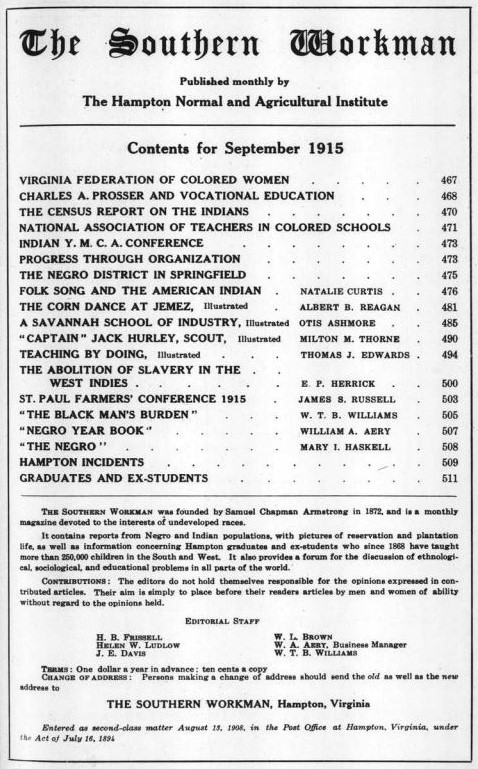 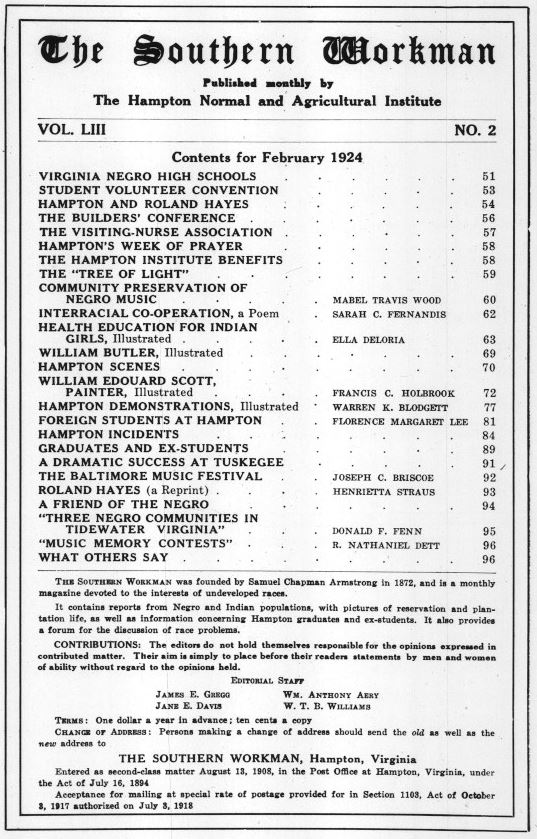 Another significant element of the Southern Workman was its coverage of Hampton’s American Indian educational program, a precursor to the federal government’s late-19th-century boarding school system, which ran for forty-five years. On 13 April 1878, sixty-two American Indians arrived at Hampton and fifteen stayed on as its first class in the program. “The Indians are the survivors of the seventy-five captured in the Indian Territory after the massacres and outrages of 1875,” explained a May 1893 Workman article reporting on their arrival. ”They represent five tribes then in rebellion, the Cheyennes, Camanches, Kiowas, Arapahoes and Apaches.” Adhering to the prevailing attitudes of the time, President Armstrong hoped to educate and assimilate American Indians at Hampton, most of whom were brought there as prisoners of war or taken from reservations by the U.S. military.

From the arrival of this first class, the Southern Workman closely recorded the activities of the department and its students over the years, even beyond the program’s conclusion in 1923. Students like the artist Angel De Cora, kidnapped from her home at thirteen and brought to Hampton; Arizona Swayney, who hoped to become a teacher to educate her fellow Cherokees; and Caroline Murie, inspired to attend Hampton in her father’s footsteps, were written about on the pages of the Southern Workman. From 1878-1923, 1,451 American Indian students (518 females and 933 males) attended Hampton Institute and the Southern Workman’s writings are a vivid historical record of the attitudes towards and the activities of American Indian education during the latter nineteenth and early twentieth centuries.