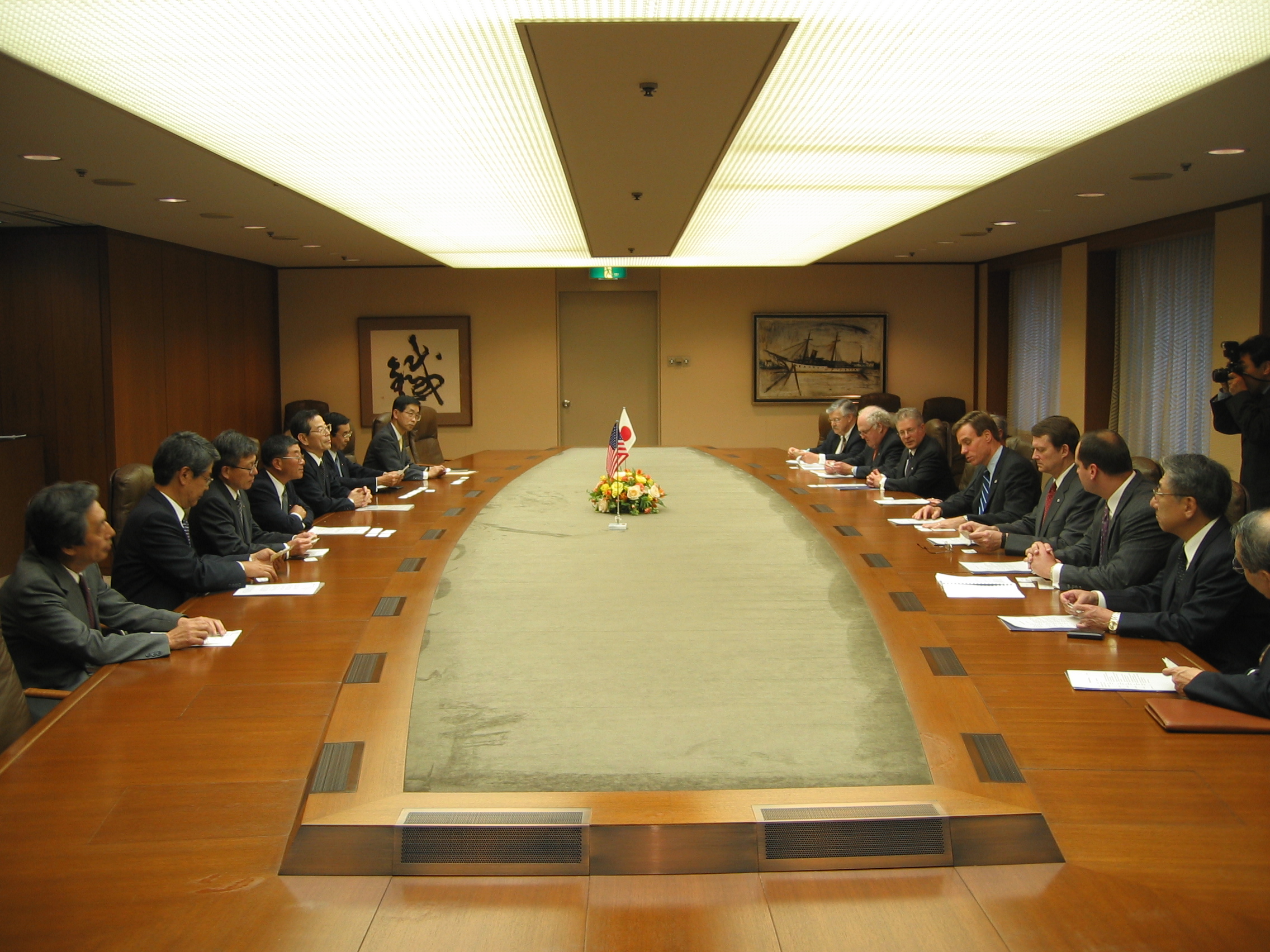 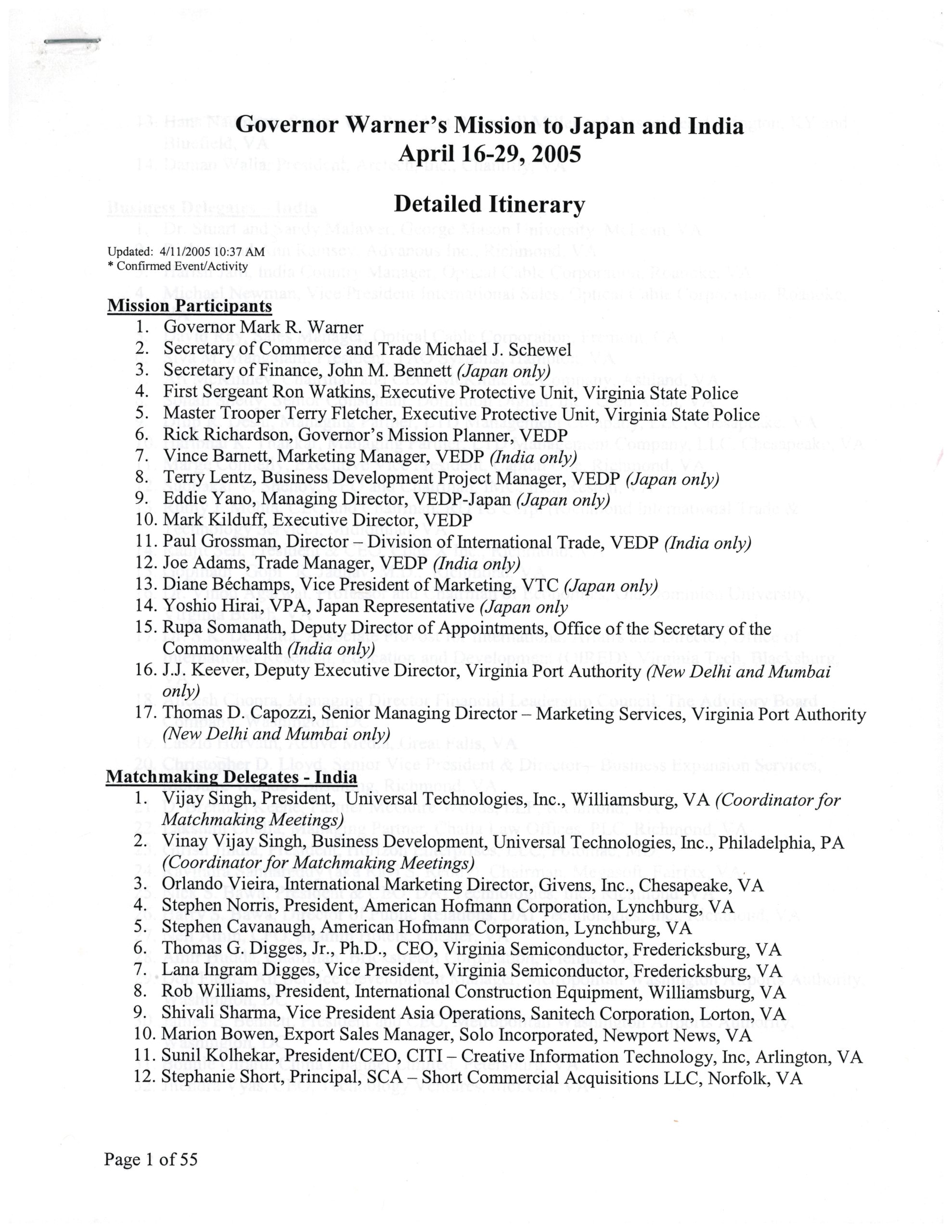 First page of Governor Warner's itinerary for the trade mission to Japan and India, 16-29 April 2005

The trade mission was part of a growing outreach to the Asian American community. Between 1990 and 2000, Virginia’s Asian community grew by 95% to 304,560. One year later, in 2001, Governor James S. Gilmore created the Virginia Asian Advisory Board, and Governor Warner appointed its first members in 2003. The board organized its first legislative day in 2004.4

But, why Japan and India? At the time, Japan was “the third largest export destination for Virginia products,” particularly tobacco and plastics, even though exports declined from $1.32 billion in 2002 to $0.91 billion in 2003.5 Japan and Virginia also had significant ties to one another. The Virginia Economic Development Partnership even had an office in Tokyo, and Japan had more than 95 businesses and almost $4 billion in investments in Virginia.6

Contrary to Japan, India’s trade with Virginia was less-established but was increasing. It was valued at almost $45 million in 2003 and growing 135% from 2003 to 2004, and India began to reduce its tariffs in January 2004.7 Governor Warner noted that “India is ‘one of the fastest-growing economies in the world,’ and he hoped ‘to position Virginia in the lead to get a piece of this growing Indian economy,’”8 particularly since other states were focusing on China at the time.9 Consequently, press coverage focused more on India than on Japan.

The Virginia Economic Development Partnership, an organization created by the General Assembly in 1995 and managed by a board appointed by the Governor, handled the recruitment for the trade mission given its mission to “encourage, stimulate, and support the development and expansion of the economy of the Commonwealth of Virginia.”10 As noted by participant Stuart S. Malawer, “trade and transnational business is not conducted by states, but rather by individuals and corporations. Working as a facilitator, state governments often set the tone, play matchmaker and implement public policies that foster greater international transactions.”11 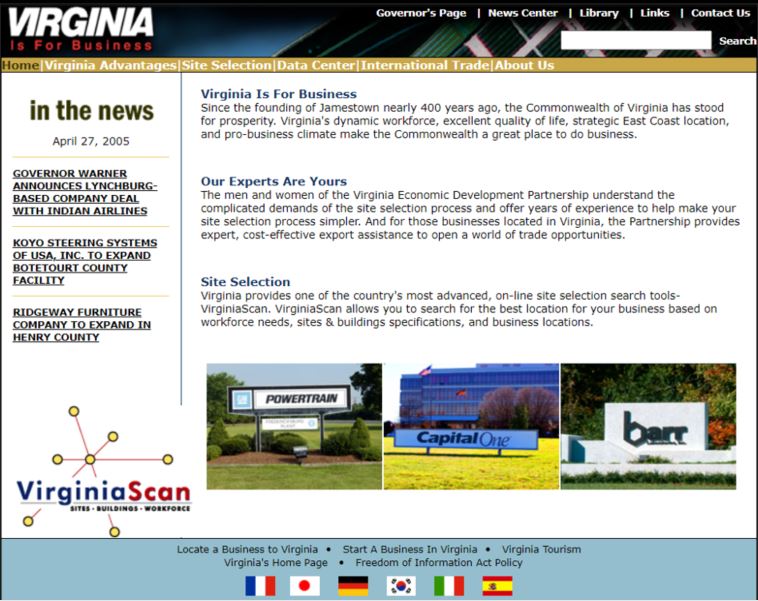 The India portion of the trade mission required a significant amount of preparation given that contacts had to be found, and Governor Warner was to be the first Virginia governor to travel to India. The VEDP’s Trade Division began its preparations for the India portion of the trade mission one year in advance by creating recruitment materials and asking its Trade Managers to suggest companies that may have an interest in India. These efforts were followed by sending recruitment kits, creating press releases, and including information about the trade mission on their website and publications, media coverage, and in-person meetings. Official invitations were issued by the Office of the Governor.12 Of particular interest were pharmaceutical companies because Indian pharmaceutical companies did not always have U.S. markets; food processing because Indian companies needed to be better at meeting FDA guidelines; defense contractors because they could be potential buyers for Virginia’s shipbuilding and GPS software; and products that could be sold to rural markets, such as “shampoo, soap, dish detergent, and other basic needs items.”13 Rick Richardson of VEDP and Terry Fletcher of the Virginia State Police travelled to India a month before the trade mission to handle arrangements.14

Of particular note is that on 19 April, Governor Warner was the first U.S. Governor to visit Expo 2005’s U.S. Pavilion in Aichi. This visit to the world’s fair also included a meeting with the U.S. Ambassador to Japan, Lisa Gable, a tour of the expo, and a visit to the Toyota and Japan pavilions.18 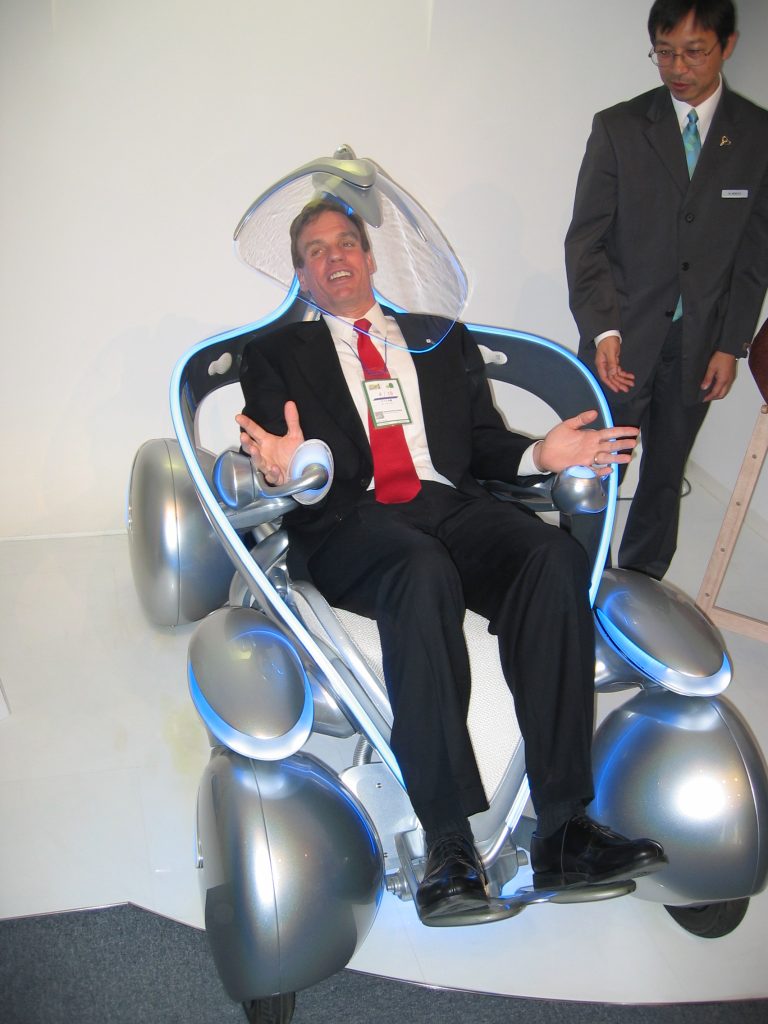 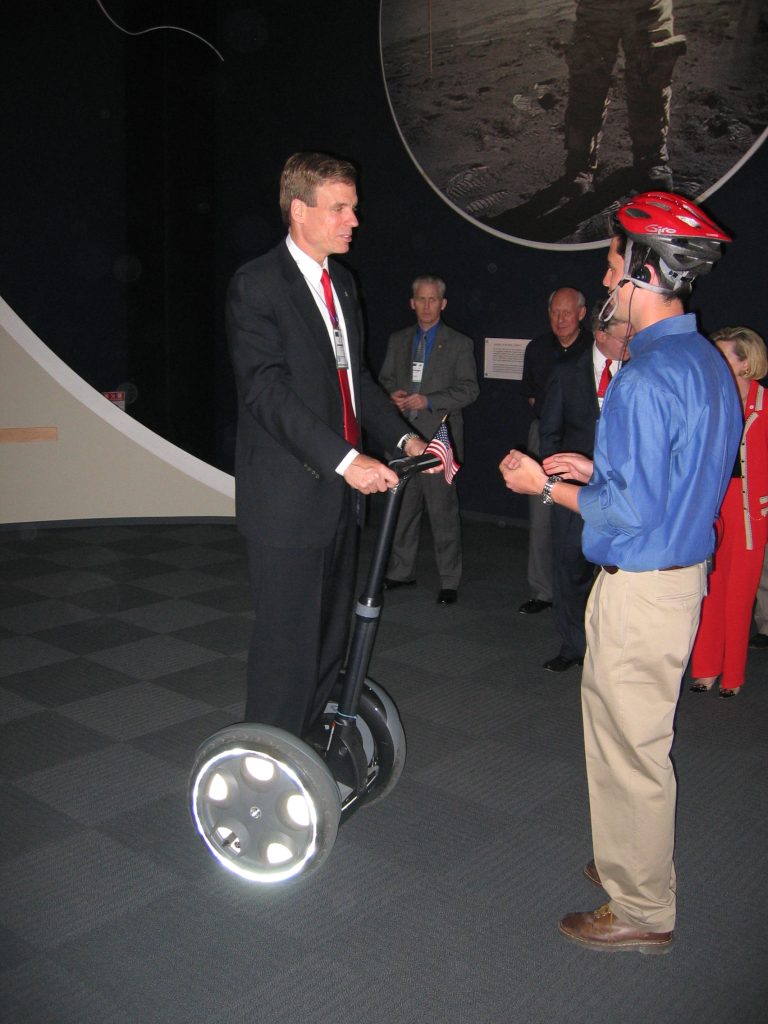 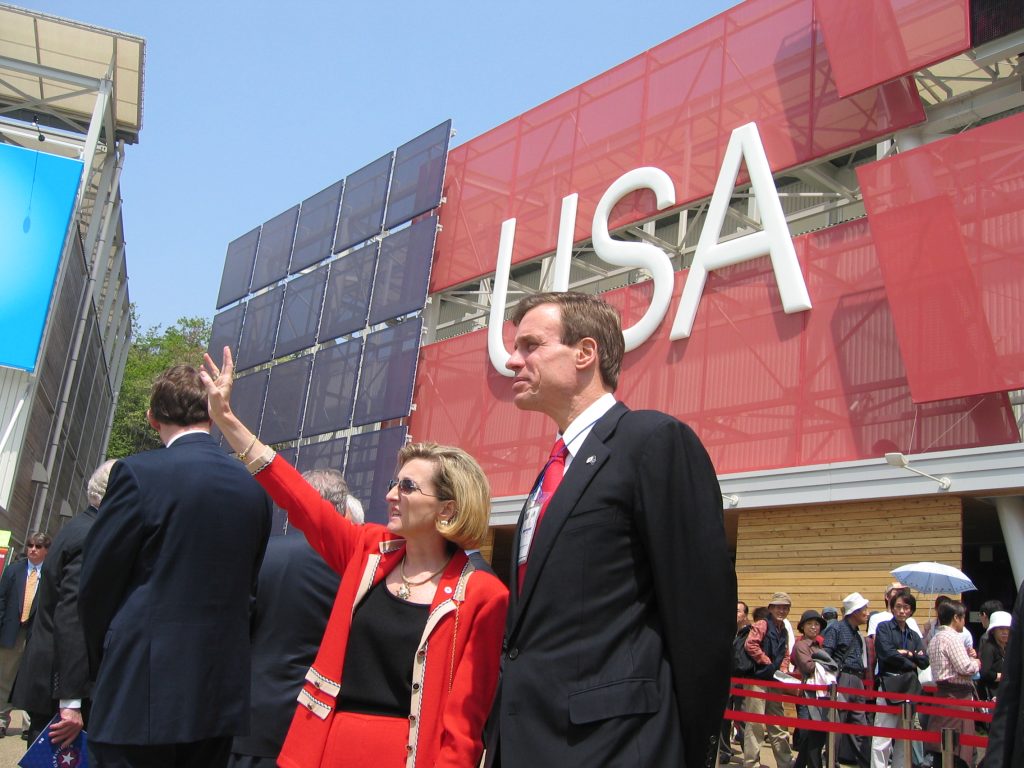 The evening of Friday, 22 April, Governor Warner became the first Virginia governor to lead a trade mission to India and the leader of the largest state delegation to India. He travelled from Narita International Airport to Hong Kong International Airport on Cathay Pacific Airlines Flight 521 and then to the Indira Gandhi International Airport in New Delhi aboard Cathay Pacific Airlines Flight 753, arriving in the early hours of the morning of Saturday, April 23. Meetings began that day and lasted through 28 April. In New Delhi, the delegation met with representatives from Hole-in-the-Wall Education Ltd., the Confederation of Indian Industry, the “Young Turks” members of Parliament, American Hofmann Corporation, and the Prime Minister. In Bangalore, the delegation met with Infosys, Wipro Technologies, and Biocon. Lastly, in Mumbai, the delegation met with Air India, Sterling Biotech Limited, the United States India Political Action Committee, TATA, Essel Propack, Reliance Industries, Ltd., and the Indian Entrepreneurs. In addition, there were meals with several families, matchmaking meetings, and meetings with local business leaders and the Federation of Indian Chambers of Commerce and Industry.19

In addition to meetings, there were many receptions and gatherings of delegates, and a small amount of time was set aside for sight-seeing, including the India Gate, Red Fort, Raj Ghat, and Kutub Minar in Delhi, as well as the Taj Mahal in Agra.20

Gifts are traditional for trade missions, and special efforts were made to personalize them on occasion. For example, Takashi Fukushima, the General Manager of Wako Pure Chemical Industries, Ltd., received a dozen golf balls because he was the hole-in-one-winner at the VEDP golf tourney, in addition to a state seal coaster.21

Governor Warner’s visit resulted in several successful deals. On 21 April, his office announced that Koyo Steering Systems of USA, Inc., would bring 96 new jobs to Botetourt County as a result of a $36 million investment. The company was “a U.S. subsidiary of Koyo Seiko Co., Ltd. of Osaka, Japan, which employs more than 16,000 throughout its worldwide subsidiaries. The parent company manufactures steering systems, bearings, automobile components, mechatronics, and FA [factory automation] systems. It has facilities in Japan, Asia, Europe, and South America, with U.S. operations in South Carolina and Tennessee.” It had been in Virginia since 1999. Botetourt County was regarded as particularly ideal because of educational opportunities, particularly a school for the children of Japanese employees of the company, as well as the availability of a port in Norfolk.23

Governor Warner announced three deals with Indian companies, beginning with a $350,000 agreement signed in New Delhi with American Hofmann Corporation in Lynchburg to provide balancing machines and systems for Indian Airlines that was announced on 26 April. Founded in the 1930s, American Hoffman Corporation “was the leading manufacturer of balancing machines in the U.S.” Its production and sales facilities moved from New Jersey to Lynchburg in 1974.24

Two days later, the Governor’s Office announced that Sterling Gelatin, America, Inc., would build a distribution warehouse for pharmaceutical gelatins in Prince George County that would create twenty jobs. This was to replace a leased facility in Chester that employed only five people. The deal was finalized at Sterling Biotech Ltd.’s Mumbai headquarters. The company was “the largest manufacturer of pharmaceutical gelatins in Asia.”25 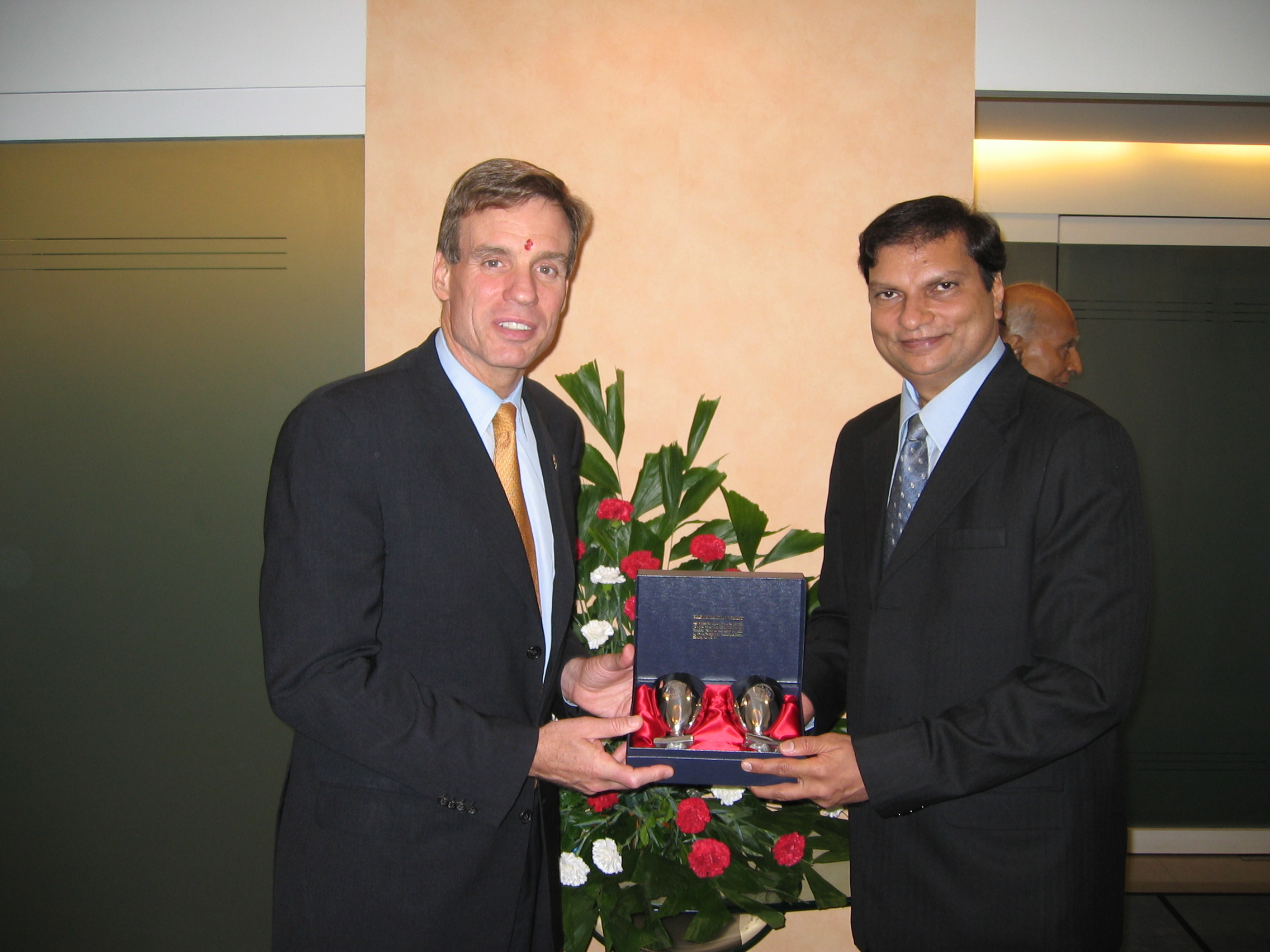 The next day, a third deal was announced—Essel Propack America, LLC, which had headquarters in Mumbai, was to expand a manufacturing facility in Danville that would “allow the company to supply laminated tubes and caps to Proctor & Gable and other toothpaste and cosmetic product companies in the United States” and bring forty jobs to the area. Governor Warner noted, “Essel Propack’s second expansion in Danville in less than three years demonstrates the kind of success that Asian companies will find in Virginia.” Essel Propack was “the largest specialty packaging company in the world” and “ranked No. 1 in the world for the manufacture of laminated tubes.”26 Danville had received several grants from the Governor’s Opportunity Fund to assist Essel Propack—$200,000 when the company first arrived in 2002, another $75,000 when it expanded in 2003, and $70,000 to assist with the proposed 2005 expansion. This matching grant fund for localities—now the Commonwealth’s Development Opportunity Fund—is managed by VEDP and the Secretary of Commerce and Trade and approved by the Governor.27 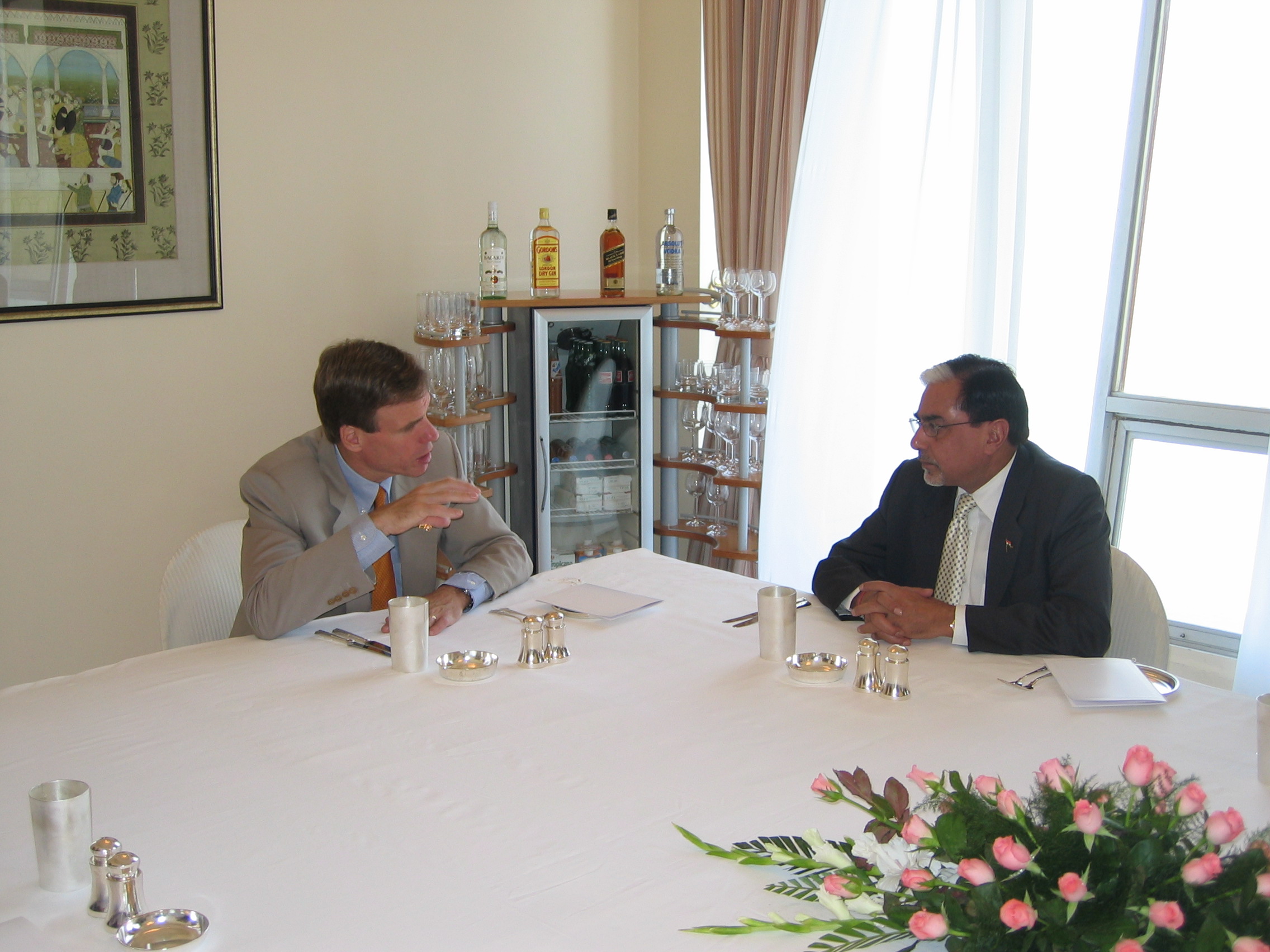 Following the trade mission, Governor Warner noted that India “blew me away. It is a country on the verge of exploding—in a positive way.” He stated that “We ignore India at our peril,” and that “it will have a larger work force than China by 2040.”28 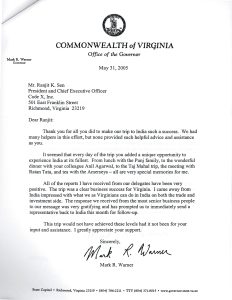 Of course, Virginia continues to strengthen its economic ties to other countries, and the Virginia Economic Development Program hosts trade missions for Virginia businesses to promote trade in Africa, Asia Pacific, Europe, Latin and South America, the Middle East, and North America.34

The author wishes to thank Roger Christman, Senior State Records Archivist at the Library of Virginia, for guidance with some of the research for this blog post.