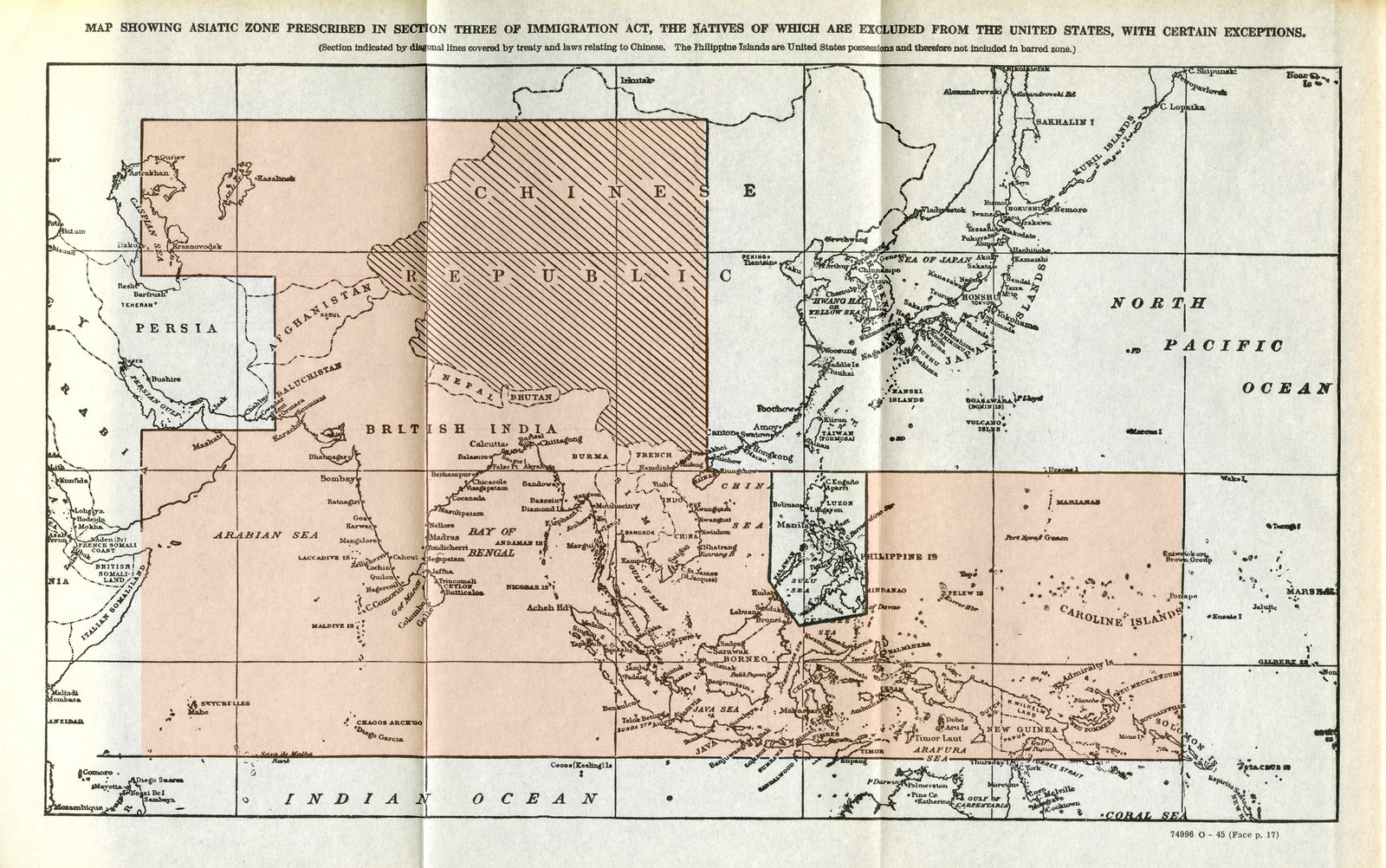 The U.S. census population schedules provide a glimpse into the Asian American population over time. As is so often the case, the questions asked and statistics gathered do not necessarily reflect all of the questions that we have today.

The federal government began asking questions about citizenship and countries of origin beginning with the fourth U.S. census in 1820. In 1820 and 1830, those who were counted were merely asked about citizenship. As immigration increased towards the end of the 19th century, so did the questions, which came to include place of birth, parents’ places of birth, language spoken, and, in the mid-20th century, past residence. 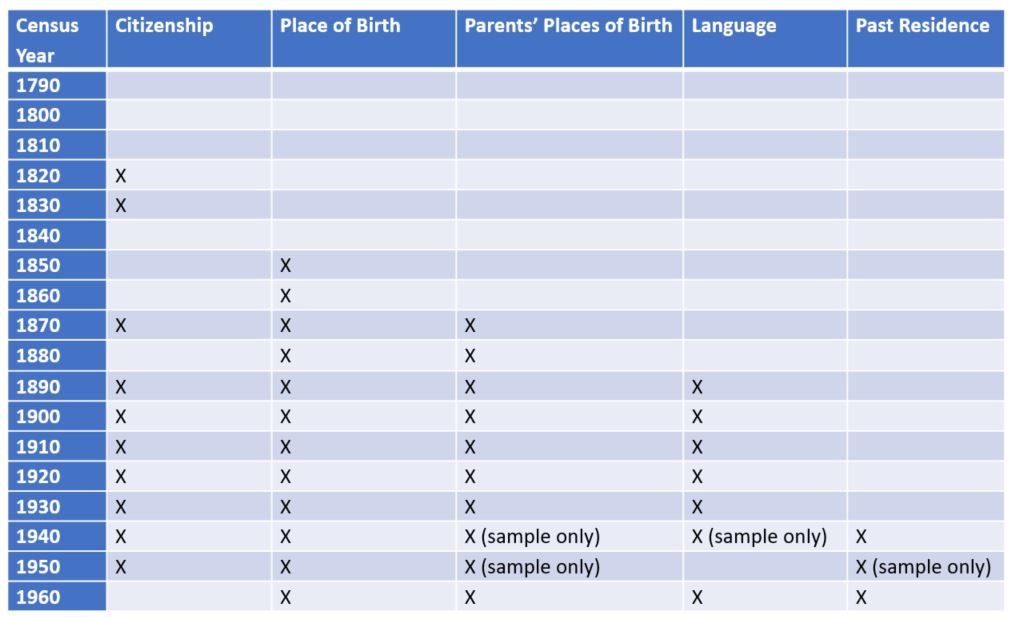 Eventually, these questions took on great significance. On 26 May 1924, the federal government developed a quota system for immigration (43 Stat. 153). The law stated that “The annual quota of any nationality shall be 2 per centum of the number of foreign-born individuals of such nationality resident in continental United States as determined by the United States census of 1890, but the minimum quota of any nationality shall be 100.” “Non-quota immigrants”—those who did not need to adhere to the quota system—included those who were born in Canada, Newfoundland, Mexico, Cuba, Haiti, the Dominican Republic, the Canal Zone, Central America, and South America; spouses and children; and certain occupations. Consequently, the ethnic groups who immigrated in more recent times—and who were continuing to come in great numbers at that time—were extremely limited. This included individuals from Eastern and Southern Europe, the Middle East, and Asia.1

Individuals from Asia already had restrictions placed on them. On 6 May 1882, the Chinese Exclusion Act (22 Stat. 58) placed restrictions on Chinese laborers, and individuals from China were barred from citizenship. The Chinese Exclusion Act was not repealed until 17 December 1943 (57 Stat. 600). On 5 February 1917 (39 Stat. 874), the Asiatic Barred Zone was created, which meant that residents of Asia who were not natives of islands possessed by the United States could not enter the United States unless they were members of an exempt profession or spouses or children of those who were exempt.2

Map of the Asiatic Barred Zone

``Hearing before a Subcommittee of the Committee on Immigration, United States Senate, Seventy-Ninth Congress, First Session, on S. 236: A Bill to Permit All People from India Residing in the United States to be Naturalized, April 26, 1945. ``Washington, DC: United States Government Printing Office, 1945. (Color added by Jessi Bennett)

The quota system was refined over time. The Displaced Persons Act of 25 June 1948 (62 Stat. 1009) specified that from 30 June 1948 to 1 July 1950, “50 per centum of the German and Austrian quotas shall be available exclusively to persons of German ethnic origin who were born in Poland, Czechoslovakia, Hungary, Romania or Yugoslavia and who, on the effective date of this Act reside in Germany or Austria.” The Immigration and Nationality Act of 27 June 1952 (66 Stat. 163) changed the quota system to be one-sixth of 1% of a nationality’s population in the continental U.S. in 1920, with a minimum quota of 100. This skewed quotas to favor those who were already well-represented in the U.S. Those who were born in Canada, Mexico, Cuba, Haiti, the Dominican Republic, the Canal Zone, Central America, or South America, or the spouse or child of that immigrant are considered to be “nonquota immigrants.” Immigrants who had at least half of their ancestry from the Asian-Pacific triangle are considered to be from that area even if born elsewhere, and the quota was set at a maximum of 2,000 for the Asian-Pacific triangle. Within quotas, immigration preferences were based on skillsets and family. Not until the Immigration and Nationality Act of 3 October 1965 (79 Stat. 911) was the quota system abolished.3

Despite the great diversity and the importance of the quota system until 1965, official census statistics recorded only a fraction of these ethnicities specifically.6 For the most recent census to be released—1950—official statistics that were published in pamphlet form for individual cities (including Richmond and Norfolk, Virginia) truncate further what is known about Asian Pacific Islander Desi Americans, given that the focus was on white and nonwhite, which was occasionally divided into “Negro” and “other races.” Great care was taken to record the statistics for places of origin for those who were white, but no such care was taken for those who were classified as “nonwhite.”7 Thankfully, with the advent of databases such as Ancestry and FamilySearch, it is possible to search for ethnicities for which data is not revealed in official census statistics. Fortunately, the publications from the census have changed considerably since 1950. In 1990, 2000, and 2010, there are publications devoted specifically to the Asian and Pacific Islander populations within the United States that provide detailed statistics.

Chart showing ethnicities recorded by the U.S. census over time

The United States began tracking immigration from China and India in 1820, which is one year after the Steerage Act that required the creation of passenger lists for ships coming to the United States.8 Statistics for other countries are much less complete:

In 1945, the classification of country in the country-of-birth statistics (on which the Quota Law was based) was adopted for the immigration statistics. This change resulted in the addition to the immigration lists of Afghanistan, Arabian Peninsula, Bhutan, Muscat, Nepal, Saudi Arabia, and Asiatic colonies, dependencies, and protectorates of European countries. Since 1948, the following countries have been added to the immigration lists: (1948) Burma, Ceylon, Jordan, Korea, and Pakistan; (1949) Israel (formerly included with Palestine), Lebanon (formerly included with Syria), and Yemen; (1950) Indonesia; (1952) Bonin Volcano Islands, Ryukyu Islands, Cambodia, Laos, and Vietnam; (1957) Formosa; (1961) Cyprus; (1963) Kuwait; (1964) Malaysia; (1967) Singapore.9

Ultimately, the Census Bureau collects the statistics that it deems relevant for a particular year, which means that they change over time and are not necessarily the same as statistics that are collected by other federal agencies. While the historical statistics are lacking, a great many statistics are available today to reflect the great diversity of the Asian Pacific Islander Desi American community.