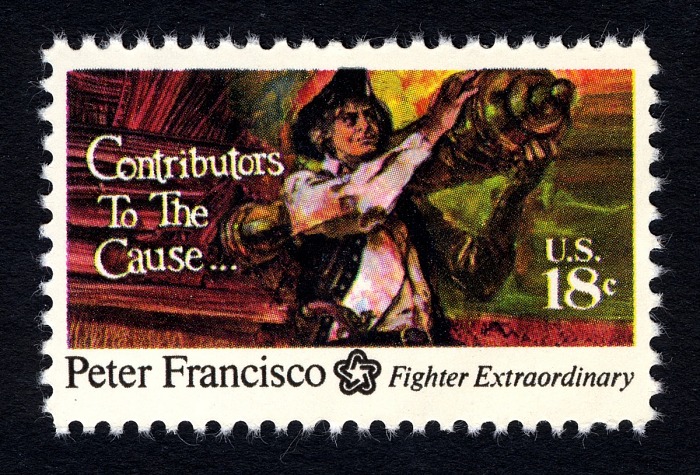 By Dawn TinnellJune 6, 2022No Comments

Peter Francisco was a revered Revolutionary War soldier with mysterious origins. It is believed that his American story began in 1765, after being discovered abandoned on the dock at City Point, Virginia (Hopewell) at five years old, only speaking Portuguese. From these humble beginnings, he was raised in Buckingham County, indentured to Judge Anthony Winston, and apprenticed as a blacksmith. Francisco grew both figuratively and literally larger than life, as he was purported to be six feet six inches tall by 16 years old and weighed 260 pounds. His epithets include: the Virginia Giant, the Hercules of the Revolution, and George Washington’s One Man Army. Tales of his valor have inspired children’s books, novels, songs, commemorative postage stamps, and the official designation of May 15 as Peter Francisco Day in the state of Virginia. 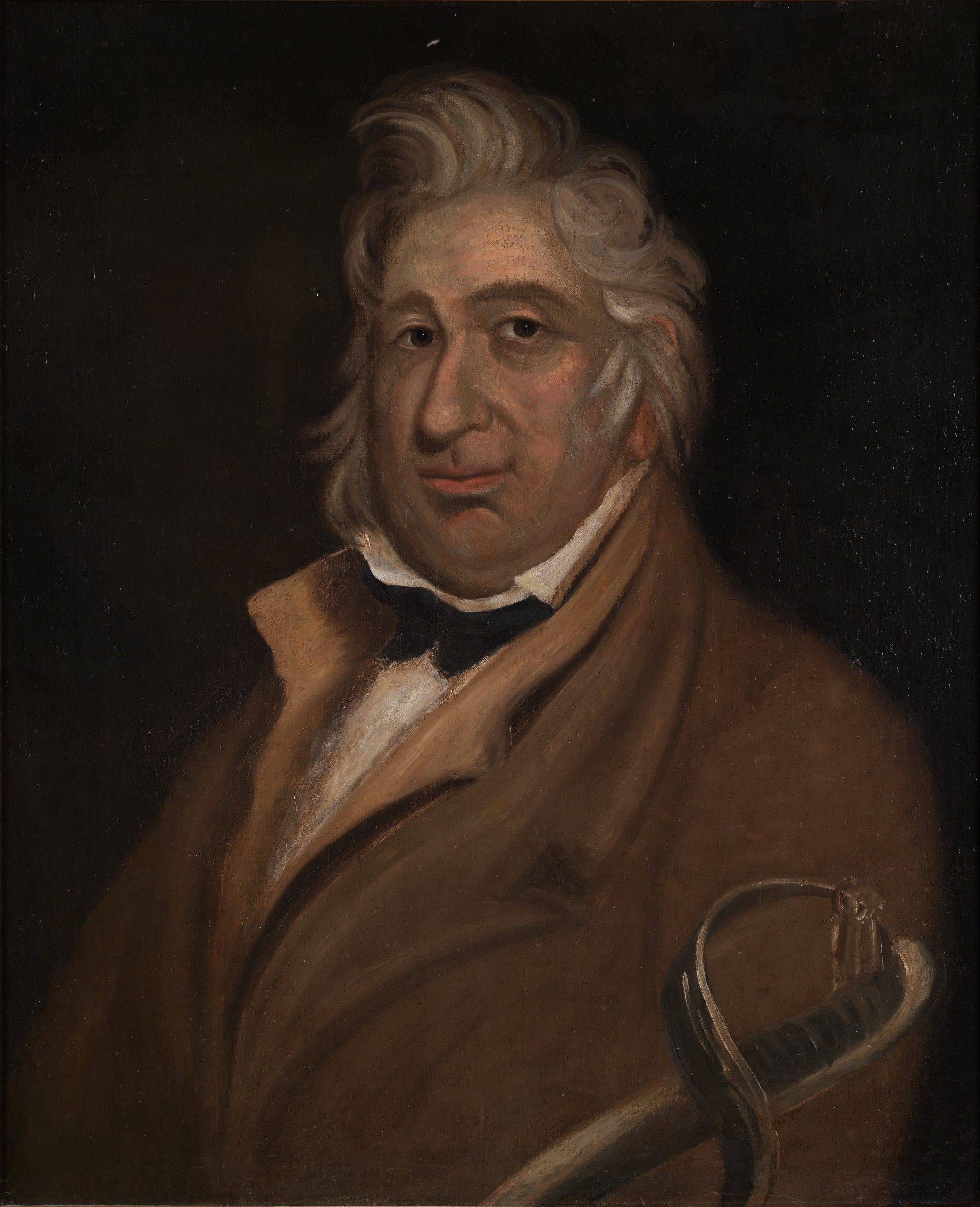 The Library of Virginia’s vast holdings contain several collections documenting Peter Francisco’s military service, including a petition submitted to the legislature for compensation describing some of his wartime activities. They do not mention, however, his most heralded exploits. Did he really carry off an 1100-pound cannon barrel to save it from the British at the Battle of Camden? Did he single-handedly kill eleven British soldiers at Guilford Courthouse? We have no documentation as to the veracity of these claims, so we may never know for sure. 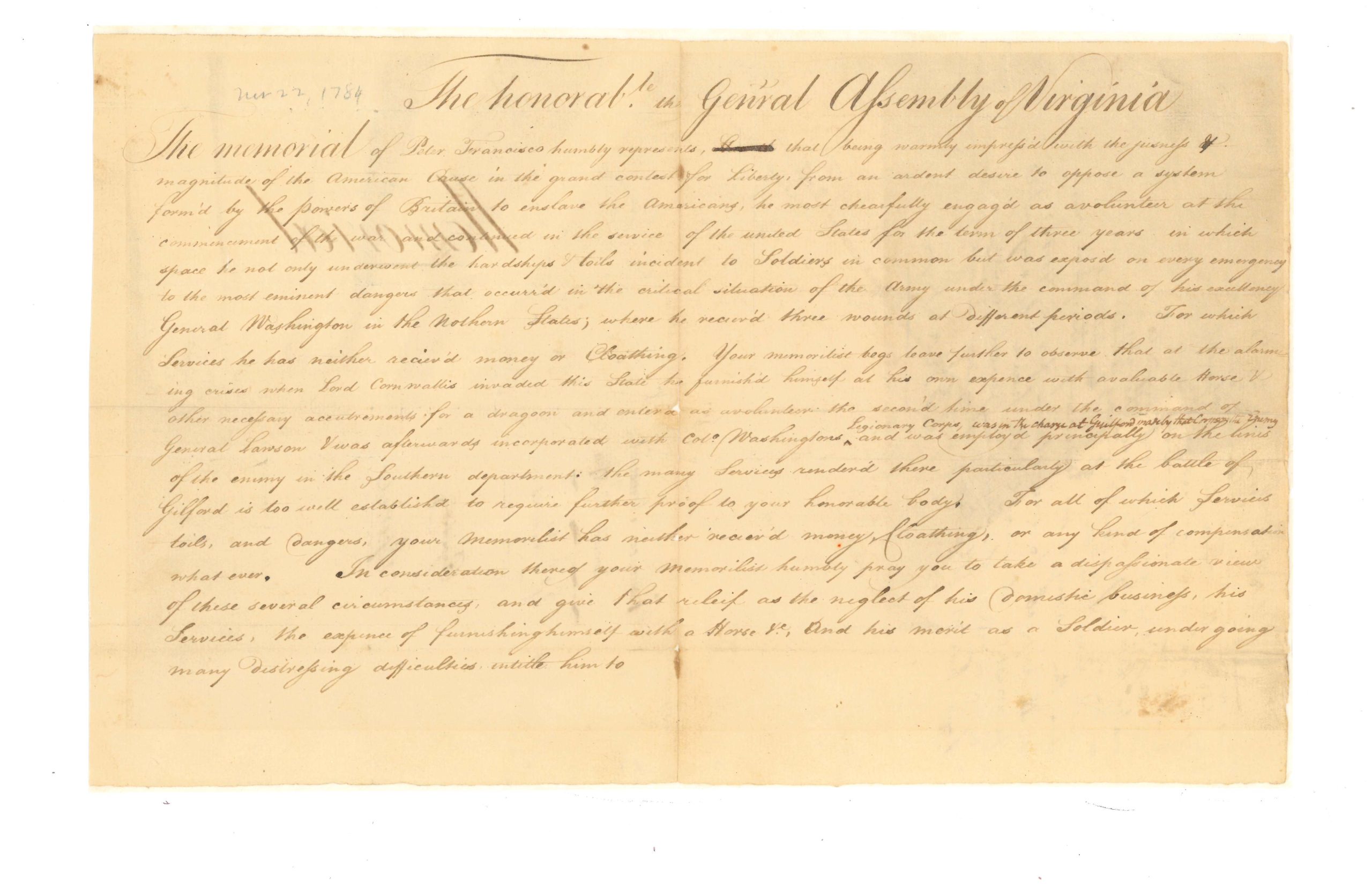 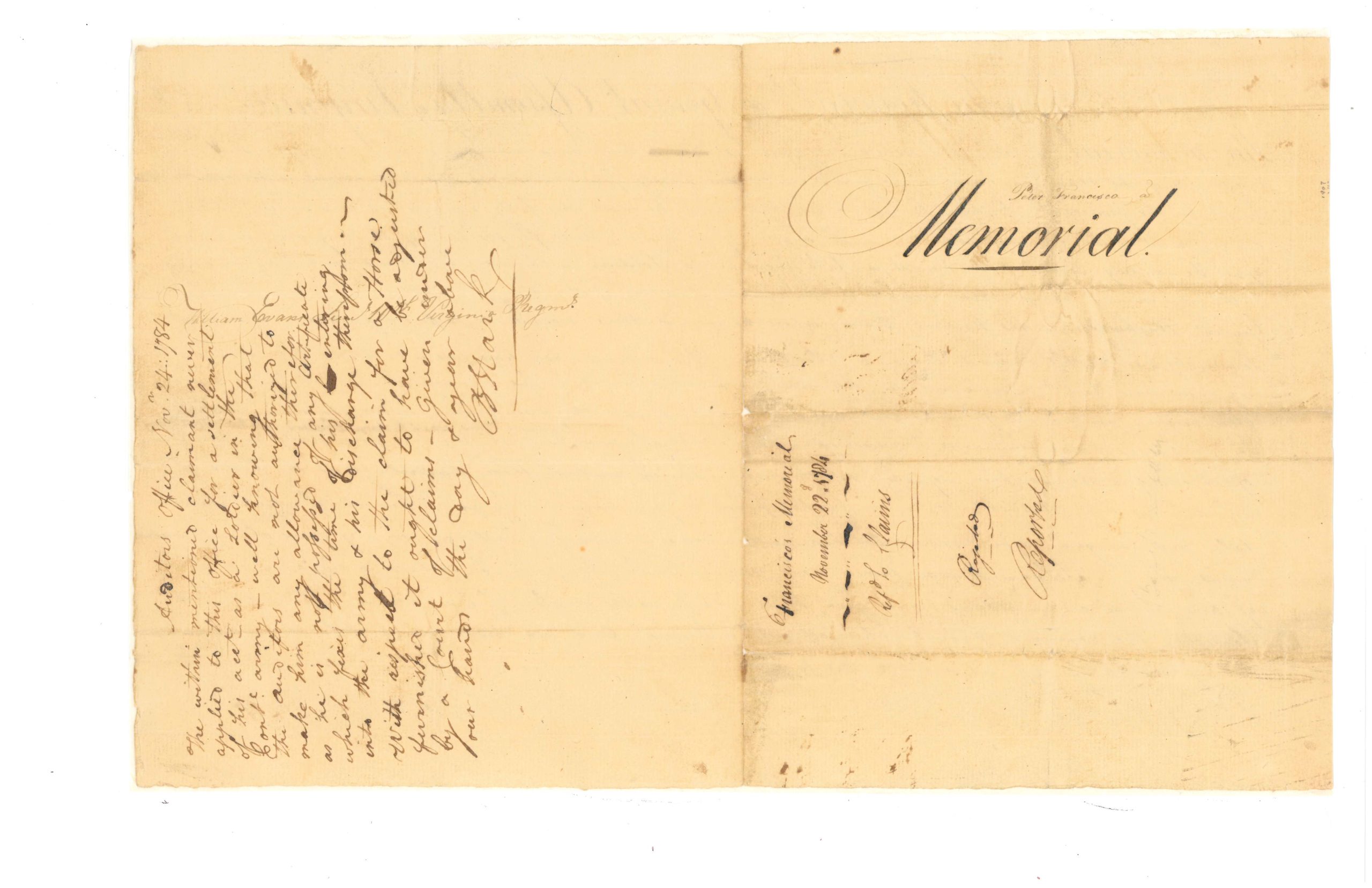 While having access to primary sources is the best part of working in an archive, sometimes the most fascinating documents can be the mundane. Despite being a hero, lauded for his strength and bravery, in the post-Revolutionary period Peter Francisco was also a regular citizen having to deal with everyday problems. He was a business owner, and he applied for all of the benefits due him. However, being a veteran (even a famous one) was not particularly lucrative. In fact, Francisco went back to work in his sixties as the Sergeant-at-Arms for the Virginia House of Delegates.

By 1821, Peter Francisco had been widowed twice and fathered six children. In 1823, as he prepared to marry for the third time (to Mary Grymes West, widow of Robert West), Peter had to deal with a very sensitive and practical matter of securing his financial assets. While rare during this time period, most premarital agreements were drawn up to secure the property rights of the woman. Conversely, prior to his marriage to Mary, Peter arranged a prenuptial agreement to assure that he would not be held legally responsible for the debts of Robert West’s estate. This document is particularly interesting since the marriage bond does not survive, as a result of the Buckingham County Courthouse fire in 1869. The only evidence of the union are the prenup and a marriage notice from the Richmond Enquirer. 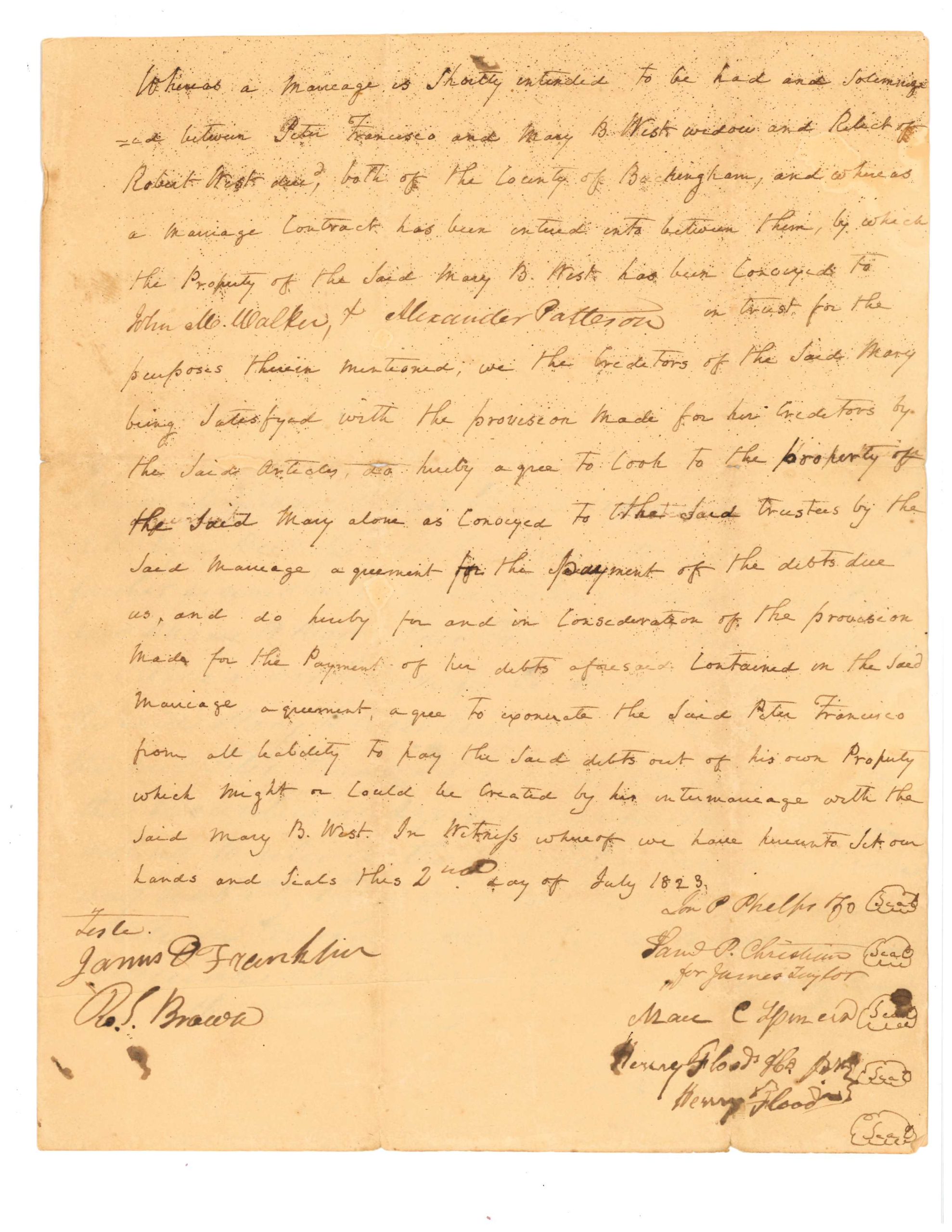 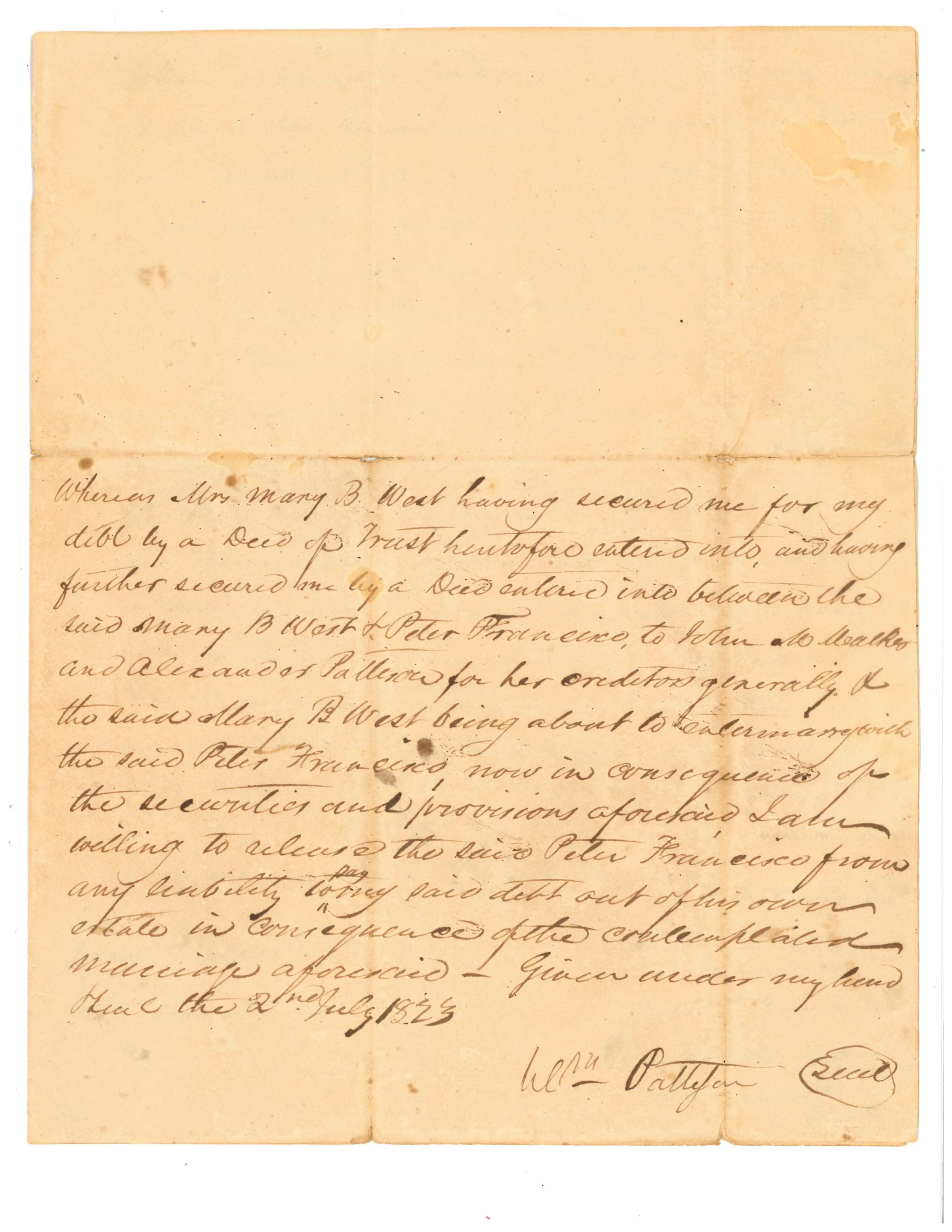 Historical research allows us to investigate original archival material that can help separate fact from fiction. It allows us to go beyond the myth and see historical figures as real people in their day-to-day lives.