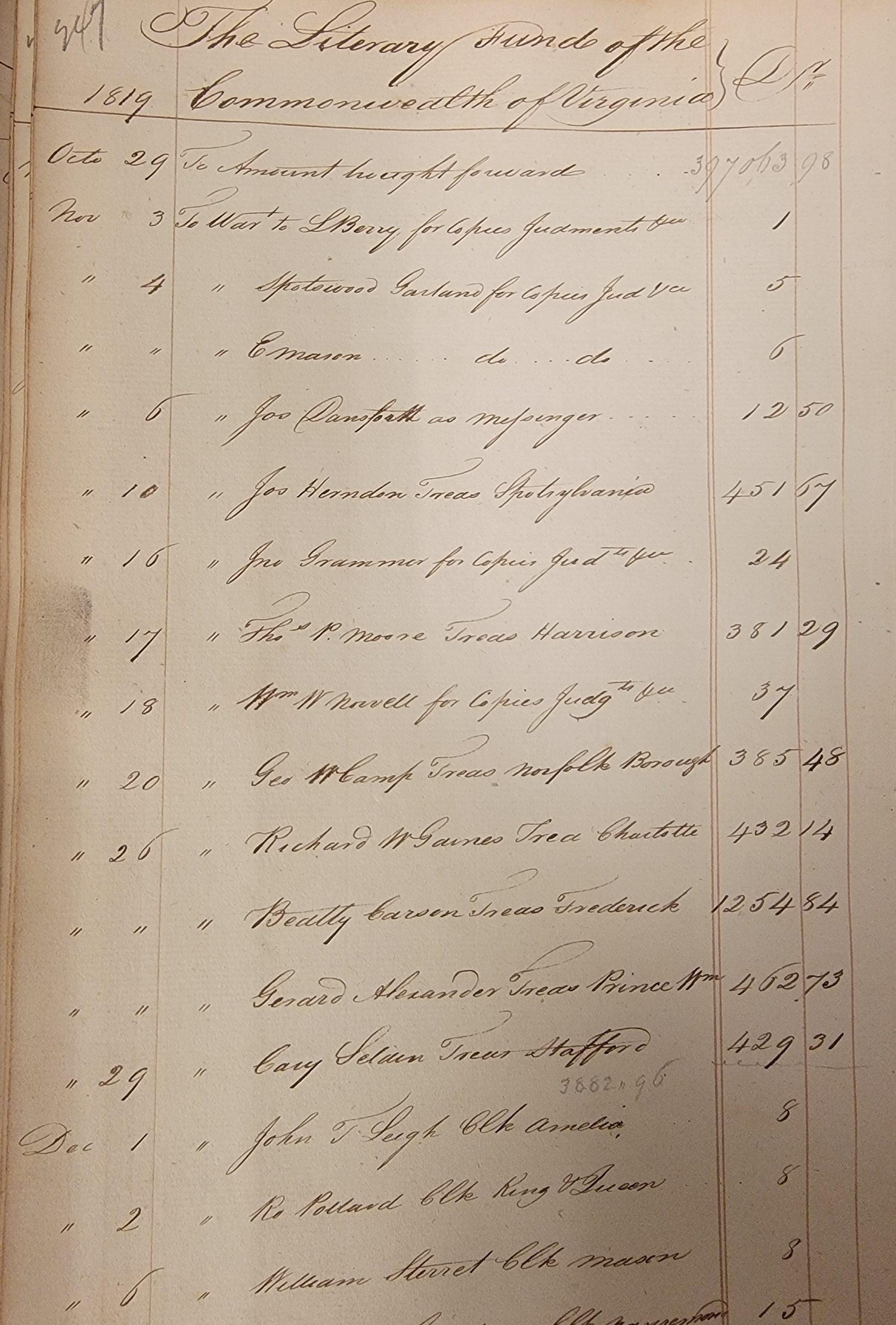 By Alan ArellanoNovember 23, 2022No Comments

In 1811, the Commonwealth of Virginia decided to set aside money for public education for the first time in its history. Various previous attempts to establish free public education in Virginia or the other colonies had been unsuccessful, as anti-tax sentiments prevented much of this from happening.1

The General Assembly passed the bill that established a formal literary fund for education, first on 24 January 1810 in the House, and in the Senate on 8 February 1810:

“Be it enacted; that all escheats, confiscations, fines, penalties and forfeitures, and all rights in personal property accruing to the Commonwealth, as derelict, and having no rightful proprietor, be, and the same are hereby appropriated to the encouragement of learning. That the aforesaid fund shall be appropriated to the sole benefit of a school or schools, to be kept in each and every county within this Commonwealth.”2

As such, this allowed for the Second Auditor of the State Treasury, at the time James Brown, Jr., to open an account with the Treasurer to be known as the Literary Fund, to “…be divided and appropriated as the next legislature sees best adapted to the promotion of literature… Its direction is cast into the ‘Act to provide for the education of the Poor,’ in which is made a ‘solemn protest’ against any future legislature’s misapplying the Literary Fund to any other purpose than that of the education of the Poor. The President and the Directors of the Fund shall, as soon as sufficient funds be provided, establish schools for the education of the poor in each and every county and shall appoint an agent in every county to look after the returns to the fund and to prevent misappropriation.”3

The directors of the Literary Fund were originally the Governor, the Lieutenant Governor, the Treasurer, Attorney General and the President of the Court of Appeals. This group was in charge of the management of said fund.

The Virginia legislature in February 1818 took things a step further when they passed an “Act Appropriating Part of the Revenue of the Literary Fund and for other Purposes,” that set aside $15,000 annually for the support of a state university (the University of Virginia), while $45,000 was given to the education of the poor.4 Some of the other higher education institutions that received funding from the act were the Virginia Military Institute in Lexington and the Medical College of Virginia in Richmond. Primarily, however, these funds did not provide services to the middle class, but rather schooling for indigent children. 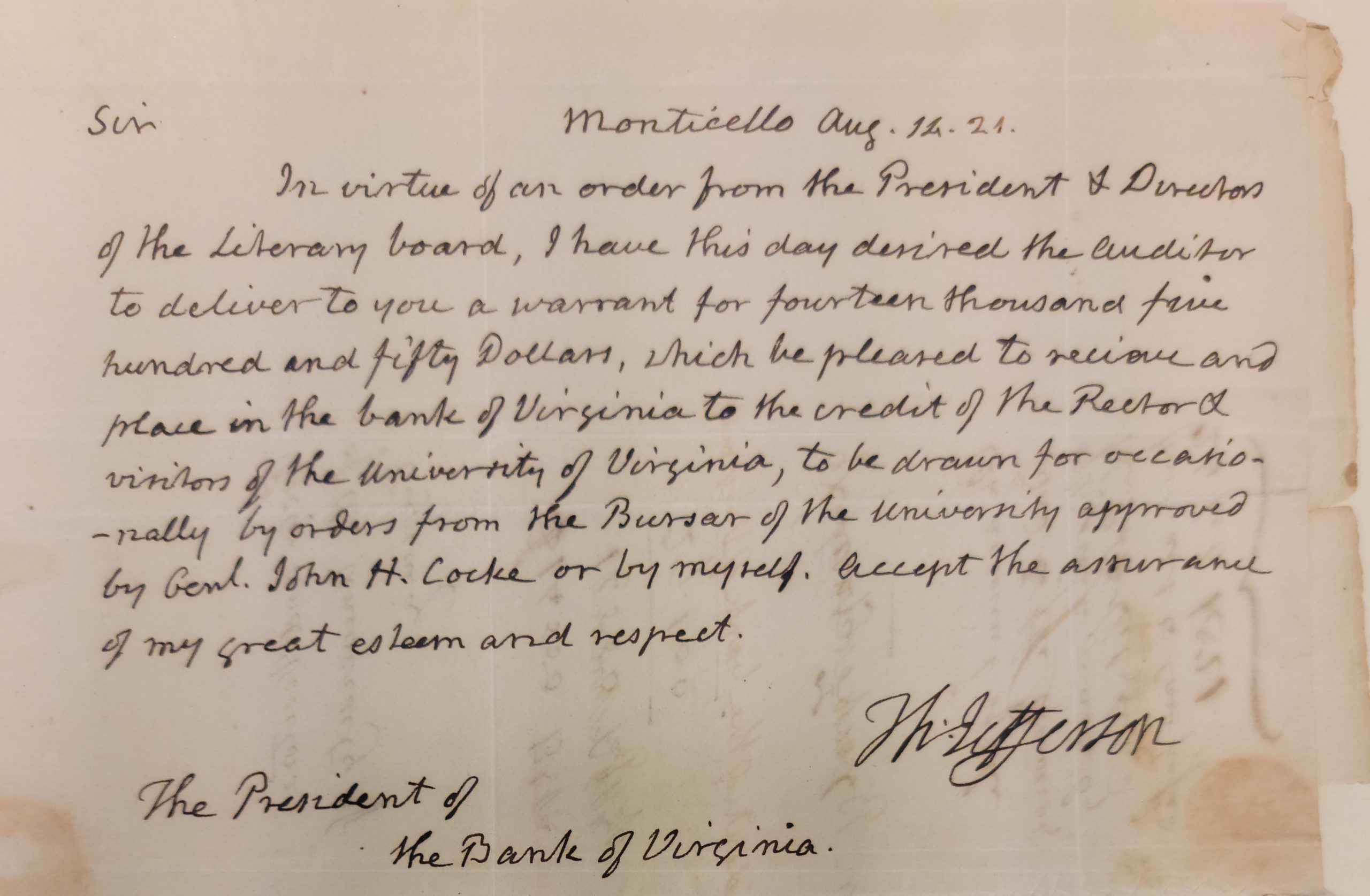 Letter/voucher from Thomas Jefferson confirming the approval of disbursement of Literary Fund money for the founding of the University of Virginia (ca. 1821).

School commissioners in each county managed and governed the schools that received funds in their localities. A rate of about three and a half cents for each child per day of actual attendance was allotted to each county and/or locality.

While the exact details of the Literary Fund account collection and disbursement process are still subject to further research, the collections of the Auditor of Public Accounts (APA) clue us into much of the transactions and the actual funding sources. Much of the funding came from various fines, fees, and bonds for a number of land-related debts and fees. These included land escheated, disbursed, or going through a redemption process. Some of the Literary Fund even included non-land-related fines as sources, such as Delinquent Muster fees or the sale of runaway enslaved persons, as covered in a previous Uncommonwealth blog entry.5 The Runaway and Escaped Slaves Receipts and Reports collection from the APA (Accession: APA 759) includes documentation from this latter source. Typically receipts were issued by the state treasurer to persons who paid money into the treasury. Such persons tended to be local officials paying in tax revenues that they had collected, but there are cases of entities paying into the Literary Fund as well. Receipts were then returned to the APA, who had first issued warrants authorizing the state treasurer to receive the funds. For Treasurer’s Receipts (Accession: APA 146) for example, each receipt contains the date, amount received, name of the person, and reason for payment. While the Literary Fund itself was established in 1811, the source of funding from land-related fees dates back to the 1790s, suggesting that the order to collect funds was retroactive. 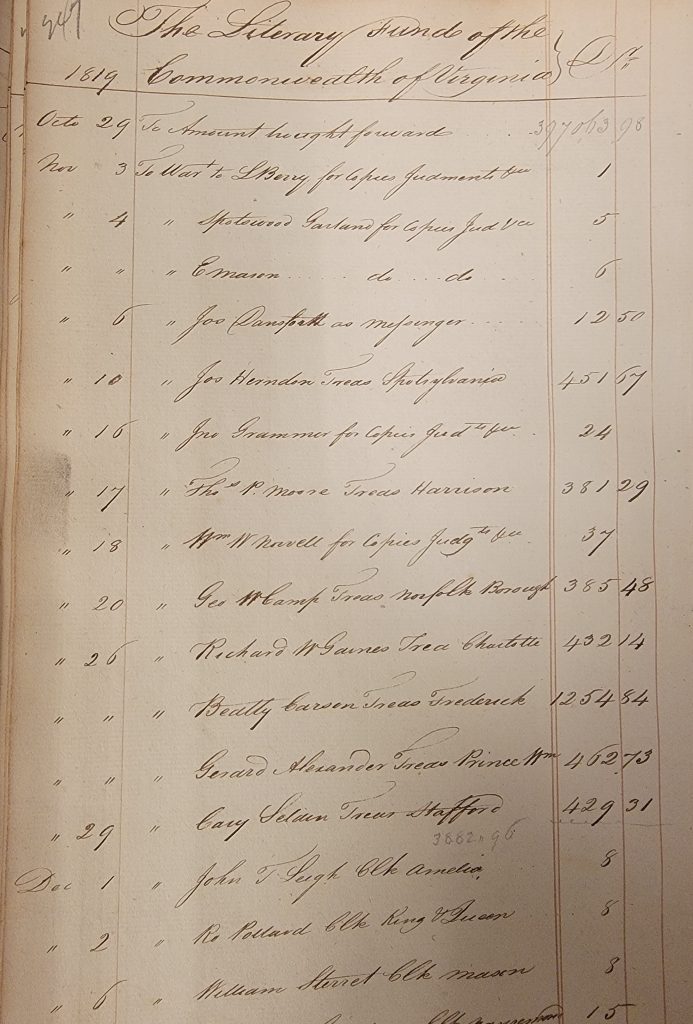 Ledger for receipts and disbursement, 1819. 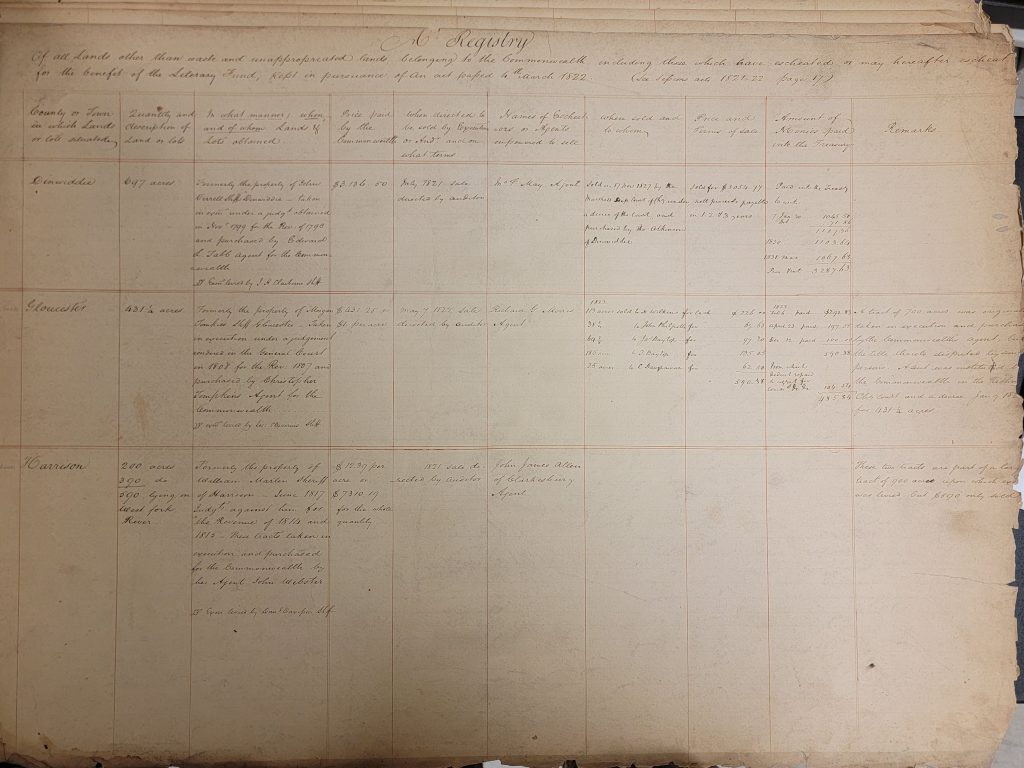 Register of lands escheated in Dinwiddie, Gloucester, and Harrison Counties towards collection of Literary Funds, 1821-1822. 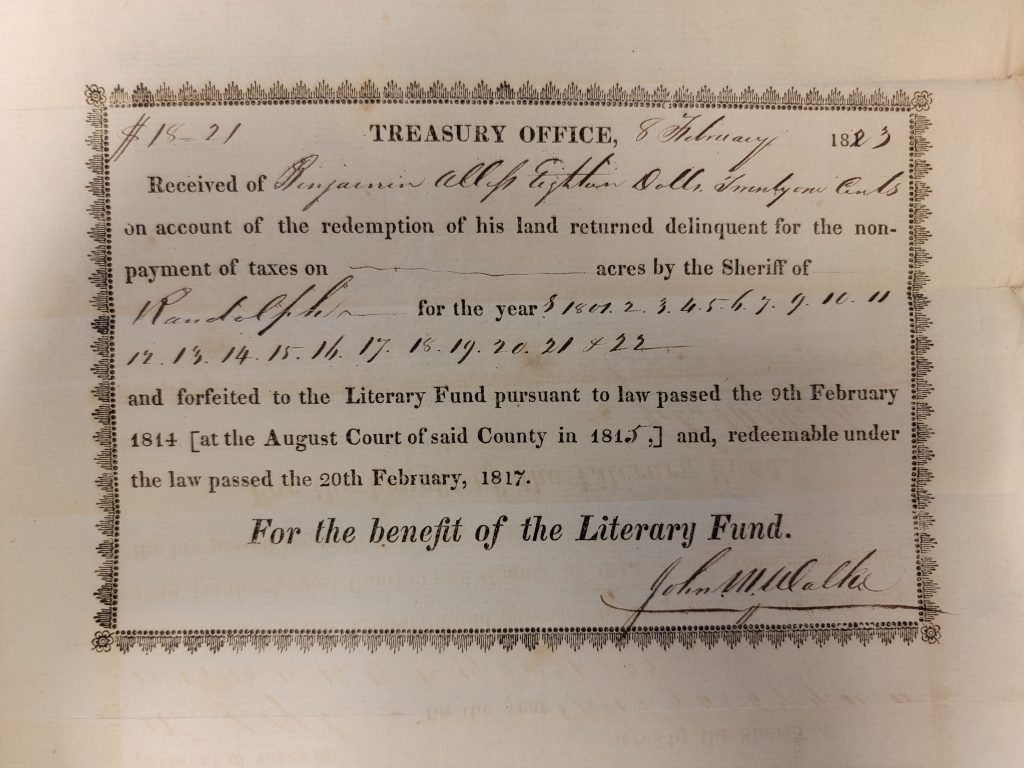 Treasurer receipt for redemption of land, 1823 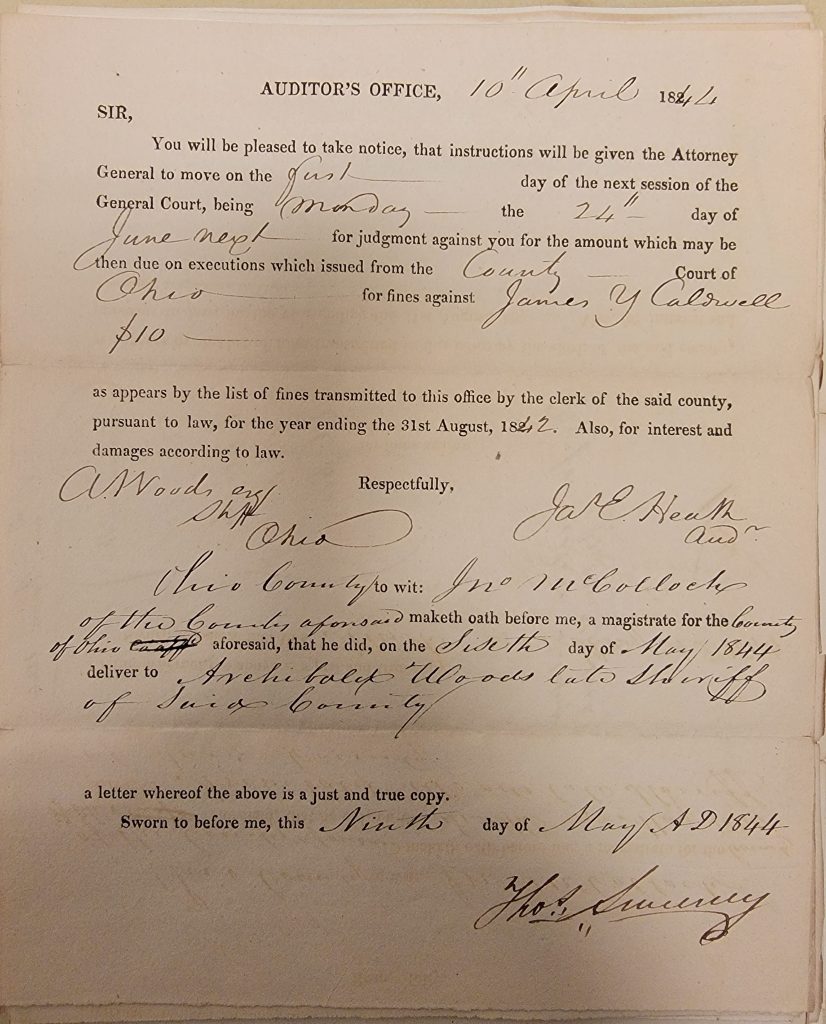 As one of the first of its kind, Virginia’s Literary Fund is currently one of the longest-running in the country. These days it provides services such as low-interest loans for school construction, grants under the interest rate subsidy program, debt service for technology funding, and support for the state’s share of teacher retirement required by the Standards of Quality. The Literary Fund Collections of the Auditor of Public Accounts have recently been described with an online guide found here.