Growing Up with Paternalistic Language: Conversations about Disability in Virginia

By Jenna GabrielDecember 28, 2022No Comments

This is the second in a series of blog posts I am writing as part of my work as an extern in State Records. In a post dated December 7, 2022, I shared that I am approaching my time in the archives with three broad lines of inquiry that, taken together, lay a foundation for the specific question I hope to ask about racial segregation under the auspices of special education supports. This blog post explores the first: historical understandings of disability in the Commonwealth.

On May 7, 1971, William B. “Bill” Robertson, a special assistant to Governor Linwood Holton, wrote a letter to his “dear friend” Mary Bagley congratulating her on an appearance in the March issue of Mental Retardation News. The short piece in which Mary appears is titled “Learning to Relate” and describes a program called Project Pals in which youth volunteers spend time throughout a year with children with intellectual disabilities from a local care facility, taking them on outings or visiting them in their homes. The piece concludes with a reflection from a volunteer, who shares that the program has taught them “both patience and love for the retarded.”

While current language in disability services and education rejects usage of “the R word” in favor of the less pejorative “intellectual disability,” the remaining language about Project Pals would hardly be out of date in most present-day newspapers. Indeed, similar programs continue to thrive in our schools and communities—programs like Best Buddies and other recreational activities that endeavor to help disabled folks under the auspices of peer mentorship or socialization. These programs are heralded for the good feelings they elicit and the opportunities for attention on disabled youth they encourage; nevertheless such programs reinforce a power imbalance that centers nondisabled experiences, positioning nondisabled volunteers as saviors to their childlike disabled buddies, who are deserving of pity and in need of help.

I begin this analysis by highlighting modern-day parallels to Project Pals because it underscores the way in which, while social understandings of marginalized identities like race and gender have evolved in the last half-century, dominant understandings of disability and of disabled people continue to be shaped by a public discourse that views disability as tragic, pitiable, inspirational, and/or deserving of investment inasmuch as the disabled person can contribute to the economy. In my research, I contend that these perceptions—shaped by historical treatment of disabled individuals—have material effects on disabled peoples’ lives and I am particularly interested in how the public discourse, left unchallenged, creates the conditions for sustained oppression.

Mr. Robertson’s letter displays several of these linguistic tropes. First, we see clear indications of a moral imperative to working in disability services. Providing services for children with disabilities is “God’s work.” Presumably due to the nature of their disabilities, disabled children are “less fortunate” than Mary or Mr. Robertson and their service to disabled children is both something to be celebrated and work that should bring personal satisfaction. Additionally of interest is the rationale Mr. Robertson provides for supporting the “mainstreaming” (we now refer to this as “inclusion”) of individuals with intellectual disabilities. We can understand from his text that individuals with intellectual disabilities are widely seen as less valuable than citizens without disabilities, but Mr. Robertson espouses a belief that their value can be “developed” in ways that would make them useful to their cities, state, and country. From this we might surmise an economic argument to programs for individuals with disabilities: Under capitalism, one’s value to their community is tied to what they are capable of producing. 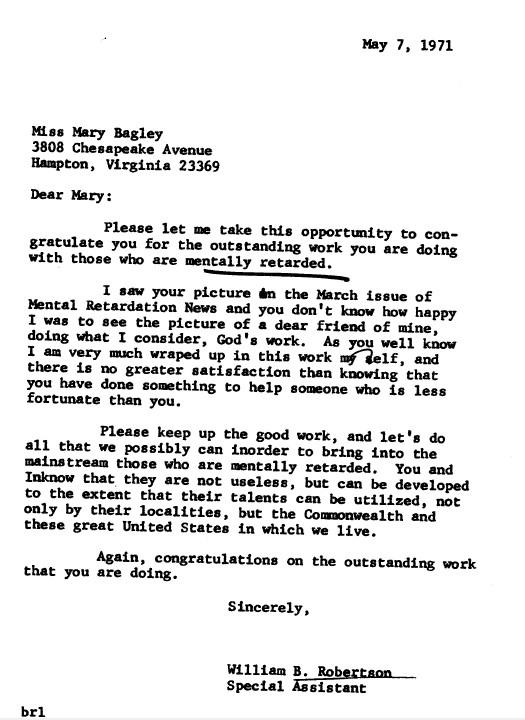 Given this, there is an argument that investing in the training of individuals with intellectual disabilities for work will generate a return as their skills are put to use for the country’s modes of production. This argument is bolstered by its tone of Americana: In the illusory meritocracy of “these great United States,” hard work and training can allow individuals to overcome their disabilities to be full participants in the American economic and civic machine. This is very different than arguing for inclusion based on an individual’s inherent humanity.

Mr. Robertson’s argument does not address inclusion as a civil rights issue or frame disability as a sociopolitical identity. On its face, this is not unusual; very few educators or policymakers take this view of disability in their work. But in addition to “mental retardation,” “race relations” was part of Mr. Robertson’s scope of work in the governor’s office and his work in this area offers a profound contrast. 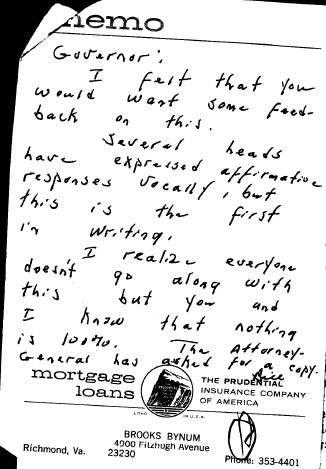 Also in the Library’s archives of Governor Holton’s term is a letter dated April 8, 1970 from Woodrow W. Wilkerson, Superintendent of Public Instruction, to Mr. Robertson expressing an openness to Mr. Robertson’s efforts urging governmental agencies to contract Black-owned businesses when possible. Attached to the front of the letter is a hastily-scrawled memo from “Bill” to the governor; several agency heads had verbally expressed such an openness but Mr. Wilkerson is the first to put it in writing. From Mr. Robertson’s acknowledgment that “not everyone goes along with this” we can surmise his concerted effort to integrate the government contractors. Moreover, we can infer a commitment to this work despite a climate hostile to his efforts. At the time of his appointment to Governor Holton’s staff, Mr. Robertson was the first Black man ever appointed to a governor’s office in Virginia—one of many such firsts that marked his career in public service.

He integrated the teaching force at Lee Junior High School in Roanoke, VA and was an outspoken advocate for Black political power in segregated Roanoke. He was the first Black recipient of Roanoke’s Outstanding Young Educator award in 1965, Roanoke’s first Black Jaycee in 1966, and, in 1969, at the urging of attorney and then-gubernatorial candidate Linwood Holton, Robertson became the first Black man to run for the Virginia General Assembly on a major party ticket. Following his loss, he accepted then-Governor Holton’s appointment as special assistant. We might surmise Bill Robertson was a man who was comfortable being uncomfortable to advance a just cause.

And this exposes the fascinating way in which disability gets separated from justice work. When the public views disability as an immutable, biological fact or a personal condition, individuals respond to it as such. Mr. Robertson’s treatment of individuals with intellectual disabilities—it is worth noting here that, at the time of his letter to Ms. Bagley, Mr. Robertson was in only the beginnings of what became more than 50 years spent supporting programs for individuals with disabilities—reflects these views and does nothing to challenge them. Let’s contrast this with his beliefs about racial justice, evident in an excerpt from his memoir, in which he reflects on his father’s experiences in segregated Roanoke. Reflecting on an experience with one of his father’s white supervisors,

“a very nice man who came to our house on Christmas Eve and brought oranges and tangerines, part of the old paternalistic system with the mindset that Whites must take care of Blacks” [emphasis mine].

“as I grew older, I realized this was not what my father needed. He needed a promotion so he could buy his own oranges and tangerines.”

Robertson continues to reflect on the paternalistic treatment of Black men and women, noting that calling grown men and women “boy” or “girl” contributes to a perception that Black people

“were childlike and needed to be taken care of, [which] affected family life because Black men and women were not given the opportunity to reach their full potential” [emphasis mine].

In advancing racial equity, Mr. Robertson explicitly worked against charity as a force for empowering Black people; we can infer that his interest is in balanced power between the races. In his work with disabled people, though, there is a distinct power imbalance that tilts toward the nondisabled—enough so that one must wonder if this is “equity” at all.

I don’t offer this analysis as an indictment of Bill Robertson. On the contrary, available materials in the archives, his memoir, and a still-active Facebook group for staff and alumni of a camp for individuals with intellectual disabilities he founded in 1970 indicate that his work made a material impact in the lives of the people he served. And indeed, people with intellectual disabilities, like their nondisabled peers, deserve access to recreation, employment, and the full scope of community life. Rather, I offer these thoughts to engage in a discussion about the systems that are shaped by the ways people throughout history, especially people in positions of power like Mr. Robertson, have talked about disability and the very real effects this has on disabled people in the present day. Many will argue that folks like Mr. Robertson do good work and that scrutiny of language or underlying assumptions accomplishes little. Others will argue that it doesn’t matter whether we view “the disability issue” as one of charity or one of justice. I disagree.

I contend that charity and justice are fundamentally different and that these distinctions have a profound effect on policy, which greatly impacts the day-to-day lives and material conditions of people. When we believe disabled people need help and remediation, we enact policies that center medical perspectives. When we believe that disability is a cause for charities, we diminish the role of government in supporting disabled folks and seek neoliberal solutions that give power to nonprofit, philanthropic service providers. When we believe disability is a social, cultural, and political identity that contributes much to our communities, we work in concert with disabled organizers to dismantle the outdated public systems that work to keep disabled folks segregated, disproportionately in poverty, and oppressed. Looking to history can help us to see where and how these views originated, to recognize how they’ve contributed (or not) to the evolution of social policies, and to understand the importance of challenging them in present day.