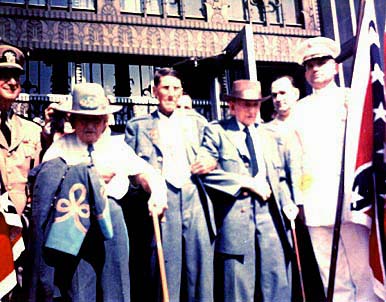 John Salling of Slant, Virginia, in Scott County, was long recognized as Virginia’s last surviving Confederate veteran.  In recognition of his service, the state of Virginia issued him a pension from 1933 until his death in 1959, at which time Salling claimed to be 112 years old. Doubt was first cast on Salling’s credibility upon his application for a state pension. When Pension Clerk John H. Johnson was unable to find evidence of Salling’s war record at the Virginia State Library (now the Library of Virginia) which maintained the records of the Department of Confederate Military Records, he required Salling to provide a sworn statement of his service to the Pension Office.

This photograph was taken in 1951 in Norfolk, Virginia. John Salling is the middle of the three elderly veterans.

Salling submitted an affidavit before a notary public of Scott County certifying that he enlisted in Company D, 25th Virginia Regiment, under Capt. James R. Collins. Salling also stated that he was detailed throughout the war to work in the saltpeter mines in the Dekalb District of Scott County. Salling’s application was approved in April 1933 and he received a monthly pension of twenty-one dollars. In his February 1991 article “The Great Imposters” in Blue and Gray Magazine, Civil War historian William Marvel invalidates John Salling’s claim using census records which place his birth in 1858, not 1846 as Salling long maintained.  Additionally, Life Magazine ran an article in 1953 featuring Salling and other aged Confederate veterans.  The magazine’s online archive states that many supposed veterans misrepresented their age or military service in order to qualify for pensions issued by several Southern states, especially during the Great Depression when Salling first applied.

The Library of Virginia houses Salling’s initial pension application from 1933 which can be viewed on the Library’s Web site along with those of thousands of other Confederate veterans and widows on the Confederate pension rolls. In addition, a recently processed collection from the Department of Accounts Confederate Pension Records (Accession 44105) documents annual pension certificates and pension payroll cards for Salling and his fellow pensioners. This latter collection also documents pensions to maiden or widowed daughters of Confederate veterans, a resource not available on the online pension rolls. 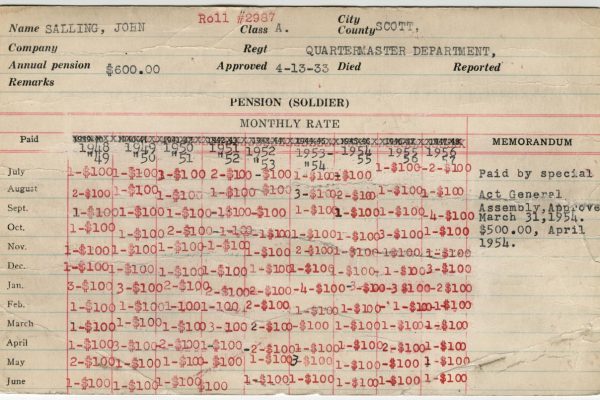 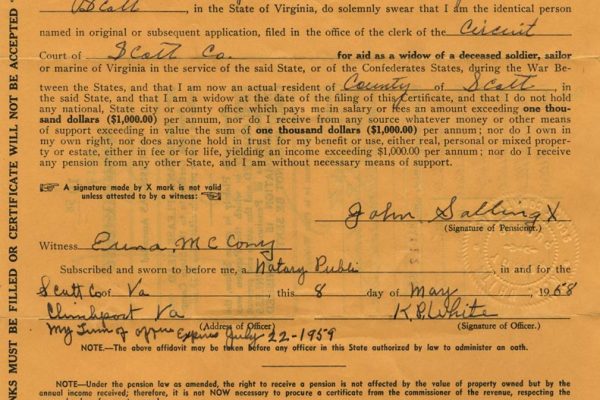 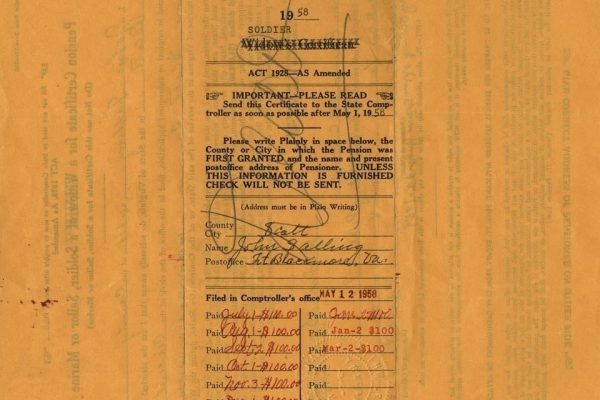 Although the Confederate Pension Rolls and recently processed Confederate Pension Records neither confirm nor deny Salling’s claim, in the eyes of the Commonwealth of Virginia, he was, in fact, who he said he was.  On 15 May 1961, a memorial marker was dedicated in memory of John Salling in Slant, Virginia, as “Virginia’s Last Confederate Veteran.”